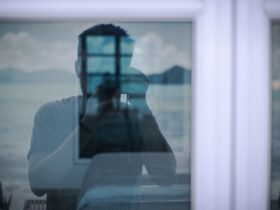 We were able to interview Jorge Reynal, winner of the Still Life category of the Open contest of the Sony Awards 2020. We tried to tell you his story and his evolution as an artist to success in one of the most important photographic competitions in the world. This is what ic said

The Sony Awards are one of the largest and most important photographic competitions in the world and every year they collect thousands and thousands of entries from professionals and not. This year we decided to tell you the story of one of the winners to show you what transforms man into an artist. Jorge Reynal was perhaps destined for photography, but he understood immediately. I like to think that it was photography itself, speaking through another great photography teacher Elda Harrington, that captured Jorge to allow him to tell something about our world. But photography had always accompanied him from an early age, courting and bewitching him little by little.

ENGLISH VERSION AT THE BOTTOM

The story | Interview with Jorge Reynal

Tell us something about yourself.

My name is Jorge Reynal, I am 53 years old. I was born and raised in Buenos Aires, Argentina. I am a proud father of three children: Martina, 17; Benjamin, 14 and Matias, 11. I studied veterinary medicine (graduated in 1989) and earned an MBA in strategic marketing. I have worked for the past 20 years in the corporate world (Mars Inc. and Colgate Palmolive).

The beginning is perhaps the most interesting part of photography. How was your passion born? How did you choose your first subjects?

My mother was a photographer. This happened in my teens. He had some success with a book of Estancias (or farms) that he made with a friend. He accompanied me in my first steps: how to use a camera, at the time of film. I think these things stuck in my mind until my 40th birthday, when I got my first digital camera. I started photographing my children. Then I moved to Europe and became passionate about street photography. But always as a hobby. Until two years ago: a client of mine asked me to build her a website, photos included, for her catering service. It was then that my professional adventure began.

But the road is long. So how has your style evolved?

Photography started out for me as a way to earn extra money. But somehow the “photography virus” infected me and took my point of view towards a more artistic approach. In the beginning it was just a matter of showing what was in front of my eyes. But then I started incorporating symbolism as a way to communicate what I had in mind. Only later did I have a meeting with Elda Harrington, the president of the Escuela Argentina de Fotografia. I met her one evening, with my laptop in hand, and showed her what I considered my top twenty twenty photos. She was very kind and patient, until finally she looked me straight in the eye and said, “What story are you telling me with these photos? You have to find a way to communicate a story ”. And that’s when it all clicked.

In many of his shots you can see contrast and sharpness that accentuate the details. Is there a particular reason that binds you to this stylistic choice? Are you passionate about the search for detail in your subjects?

I believe that photography, like in any other form of art, the work says a lot about the author. In this case, I’m a detail-oriented person. I cannot publish an image without first “treating” it extensively through Lightroom and Photoshop. Because in a way, that’s who I am. And this is my way of thinking. For example, some of the best images in the history of photography are out of focus. I could never post an out of focus image. However, never say never.

What do you think allowed you to win the Sony Awards?

Luck. A lot. Just the thought of sharing this award with some of the fantastic and talented photographers who have won this year. But to be honest with my shot, I think the “A Plastic Ocean” image reveals and showcases quite well a very current theme, which is pollution. And it does so in a very eloquent way, which invokes the deepest fears of every human being: to die from asphyxiation.

The shots | Interview with Jorge Reynal

Let’s start with A Plastic Ocean. An interesting and eloquent project.

I called this image “The Guillotine”. It is the same series that I did when I made “An Ocean of Plastic”. I wanted to show how plastic pollution is practically killing our fish. I left and empty the black space below to highlight the depths, not only those of the ocean, but also human greed.

I wanted to show how life will end in the near future if we don’t stop: we will eat fish that will be more plastic than animal. Ironically, the plate is made of plastic.

“The lynching of the ocean”: as in the other images, I wanted to convey how plastic is slowing down and constantly killing our terrestrial brothers, the animals.

A fish that is crucified. The cross is made of plastic bottles, one of the main pollutants in the ocean. This was supposed to be the original image. But somehow one thing led to another and I ended up making a whole series of images. The image says: “it is the fish that carry the cross, not human beings”.

The minimalism and the contrast high of in these shots give a lot of emphasis to details. The glassy eyes of the fish, the folds of the plastic, the glittering scales. On one shot in particular we would like to focus your attention: the guillotine. The power of the shot revolves around the plastic of the bag, thin and soft, which cuts the fish. Plastic seemed harmless to us for years, but today it has turned out to be a ruthless killer. Let’s hope we didn’t notice too late.

But let’s go even further.

This is my son, Matias, portrayed as a serial killer. In this picture I wanted to show how domestic violence can end up creating future monsters. The baby is full of flour, probably due to an indifferent mother. Indifference which then prompted him to torture his own toys.

The puppet armed with a knife goes beyond the very concept of violence. How can a puppet be violent? A puppet has no will, it is a slave to those who are around it and move it. The child in the shadows maneuvers it and takes out his frustrations on it: it is a vicious circle. The always heavy postproduction contributes to darken the atmosphere, to make it very noir.

I would like you to choose a shot now, an important shot that is close to your heart.

Kuji in. In the field of Japanese magic and onmyōdō cosmology, the nine slices are often made across a writing or image to gain control of the desired object. For example, a sailor who wants to protect himself from being shipwrecked could write them between the kanji for “sea” (海 -umi) or “water” (水 -mizu). Technically, the word “kuji-in” refers only to the postures of the hand (which in India are called mudras) and their incantations (which in India are called mantras). When the nine gestures are performed in the air with the fingers, or on paper with a brush (five horizontal and four vertical, alternating) it is called kuji kiri. In practice, the kuji-in symbolize all the forces of the universe and their union against evil; For this reason, people often use it as protection to increase their luck when they go on a trip, especially when they go to the mountains. Warning: The KUJI ritual is known to be dangerous if performed without proper initiation. If done incorrectly, it can attract unwanted entities. Many New-Age (or New Age) groups are appropriating it and teaching it without proper procedures and (without) the initiation of an ACHARYA (-religious teacher-), who should be particularly connected with one of the Japanese Tantric Lineages of Buddhism. / Mikkyo (-or Japanese Esoteric Buddhism-), preferably a SHUGENDO style. . . . . #kuji #kujiin #martialarts #kungfu #mudras #mudra #manos #mano #hand #handgestures #lowkey #lowkeyphotography #lowkeyhands #bnw #bnwphotography #bnw_greatshots #bnw_captures #bnwmood #bnw_addicted #bnw_planet #bnwbnlife #bn_mandwbn_worldmandwbn_wbnousbnous_wbnous_bnw #byn #fotobyn #blancoynegro #blancoynegro_lovers #photobnw

It is a series of shots: it is called Kuji In. I have been practicing martial arts for 10 years. During that time, I heard many stories, most of which were fantastic or even mythical about how certain masters could influence the future and invoke benevolent spirits. I shot this series around the same time I shot “Plastic Ocean”. using one of my children as a model. But somehow I never published them. I wanted to keep them to myself. Until I heard the news that I had won the contest. Then I remembered the Kuji in the photo ritual. Maybe it was, after all, the spirits of photography who helped me win this contest

This is definitely an interesting shot, where light is used to change the subject, to transform it into something different, spiritual even in this case. The simplicity of this shot is as disarming as its depth and history. The subject completely shifted to the left is well balanced by thelarge negative space. Superb.

We hope that these few lines have managed to at least partially capture the history and style of this photographer. A big thank you to Jorge Reynal and keep following us in our photography section for many other insights.

Swe managed to interview Jorge Reynal, winner of the Still Life category of the Sony Awards 2020 Open competition. We tried to tell you his story and evolution as an artist to success in one of the most important photo contests in the world. This is what ic said

The Sony Awards are one of the largest and most important photography competitions in the world and collect thousands and thousands of entries from professionals and non-professionals every year. This year we decided to tell you the story of one of the winners to show you what turns a man into an artist. Jorge Reynal may have been destined for photography, but he understood it right away. I like to think that it was photography itself, speaking through another great photography teacher Elda Harrington, that captured Jorge so that he could tell something about our world. But photography had always accompanied him from an early age, courting and bewitching him little by little.

The story | Interview with Jorge Reynal

Tell us something about yourself.

My name is Jorge Reynal. I’m 53 years old. I was born and raised in Buenos Aires, Argentina. I am a proud father of three children: Martina, 17; Benjamin, 14 and Matias, 11. I studied veterinary medicine (I graduated in 1989) and obtained an MBA in strategic marketing. I have worked for the last 20 years in the corporate world (Mars Inc. and Colgate Palmolive).