There are cars that represent one milestone in the history of a house, and for Jaguar that honor belongs to Jaguar C-Type. The legendary British racing car turns 70 this year, and to celebrate this very special birthday Jaguar through its section dedicated to historic cars, Jaguar Classic, brings the legend back to life. They will indeed be rebuilt of the new Jaguar C-Type Continuation in very limited numbers, made entirely by hand, following the specifications of the 1950s. Let’s find out the history of this model and its secrets together.

Jaguar C-Type, the jaguar that made the house legendary

For many manufacturers there is a moment that defines a before and an after, the beginning of a myth after years of “apprenticeship”. For Jaguar this moment is the birth of C-Type. But let’s take a small step back. The English house founded by William Lions in fact, after decades of building Sidecars as the “Swallow Sidecar Company” and then cars with the name SS Cars, it made a name for itself around the world in 1948, with the birth of the exceptional Jaguar XK120.

This car was born as “show car“, That is car to show an important novelty of Jaguar, namely the XK engine, from which the car also takes its name. This is one of the longest-lived and most flexible engines ever, capable of serving luxury sedans such as Mk2 or racing cars, as we will see recently. However, the car was liked so much that it went into production, and began to set records. Jaguar XK120 she is beautiful, so much so that she was chosen by world actors and stars, and hers 3.4 six-cylinder in-line engine with 162 hp made it the fastest production car in the world with 219.830 km / h.

Jaguar XK120 also began to win on the track, thanks to perfect driving and its reliable and powerful engine, capable of exceeding 200 HP. From these early successes, Sir William Lions and his staff came up with an idea. To produce an unbeatable racing car, capable of winning the 24 Hours of Le Mans. The real problem was being able to fight against the unbeatable Ferrari, capable of creating more powerful engines than all the rivals. Jaguar then decided to develop a V12 starting from the 6-cylinder XK6, but with disappointing results. The Coventry Racing Team then turned to two revolutionary concepts: lightness and aerodynamics. 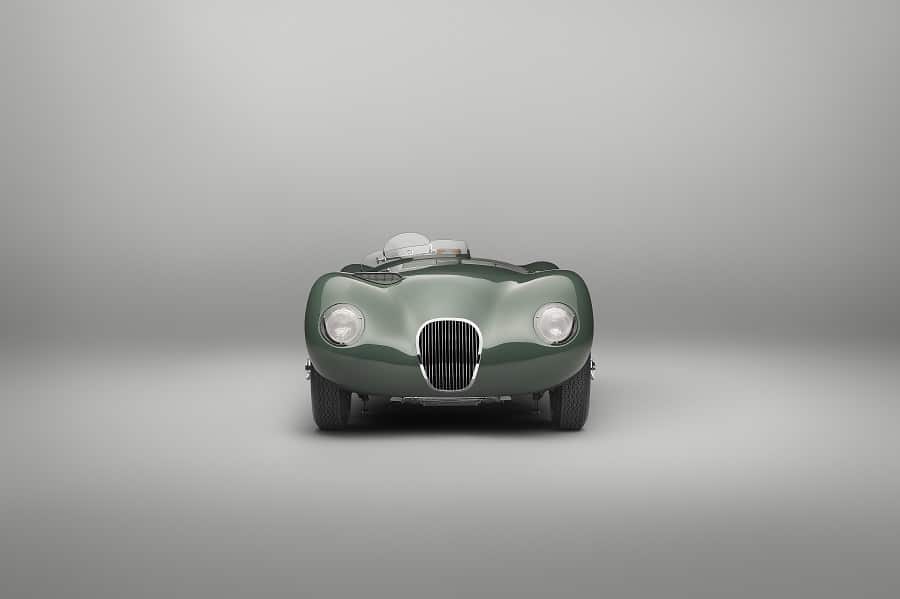 Thus was born C-Type: a car light, very light, based on the XK120 but able to save on the scale compared to this one over 400 kg. The aerodynamic care then it made her able to slice through the air like no other. The engine was the almost road version of the Jaguar XK 3.4. It was an engine that it was not designed to run, designed for luxury and fast cars, but which thanks to its compact size was much lighter than Ferrari V12s, and left room for the aerodynamic care by Jaguar technicians. It was then reliable and fairly powerful with his 200 CV, and at the end of the Mulsanne / Hunadièeres straight capable of pushing C-Type up to over 240 km / h.

The victory of 1951 and the debut of disc brakes

Jaguar’s first participation in the 24 Hours of Le Mans came in 1951, where the first version of C-Type he won with 9 laps ahead on the pursuing Talbot. Think its official name was Jaguar XK120-C, a clear sign of the derived from the road sports car of the Jaguar. The pilots Peter Walker and Peter Whitehead therefore managed to defeat the most powerful and fastest rivals with aerodynamics and lightness, triumphing on the Circuit de la Sarthe. But for Jaguar one victory was not enough. 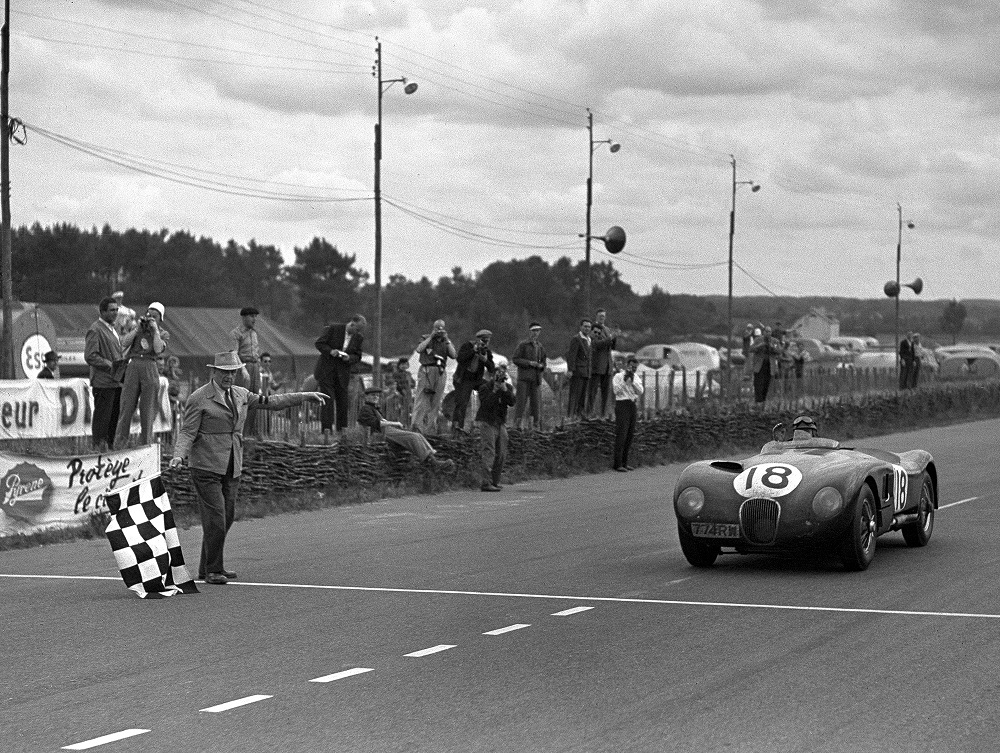 Indeed, Jaguar had in his pocket an innovation that has forever changed the world of motors. After a disappointing 24 Hours of Le Mans in 1952, which ended with no cars reaching the finish line, Jaguar realized that something was still missing from his C-Type. Lightness and aerodynamics were no longer enough, but the XK engines if “squeezed” still became grumpy and much less reliable. Where to improve again? In a fundamental forgotten by all the others: braking.

In fact, in 1952 all the cars participating in Le Mans had drum brakes, simple and cheap to make but not very efficient, and subject to frequent overheating. Jaguar then together with the English Dunlop developed a system that had been looking for its final form for decades: disc brakes. 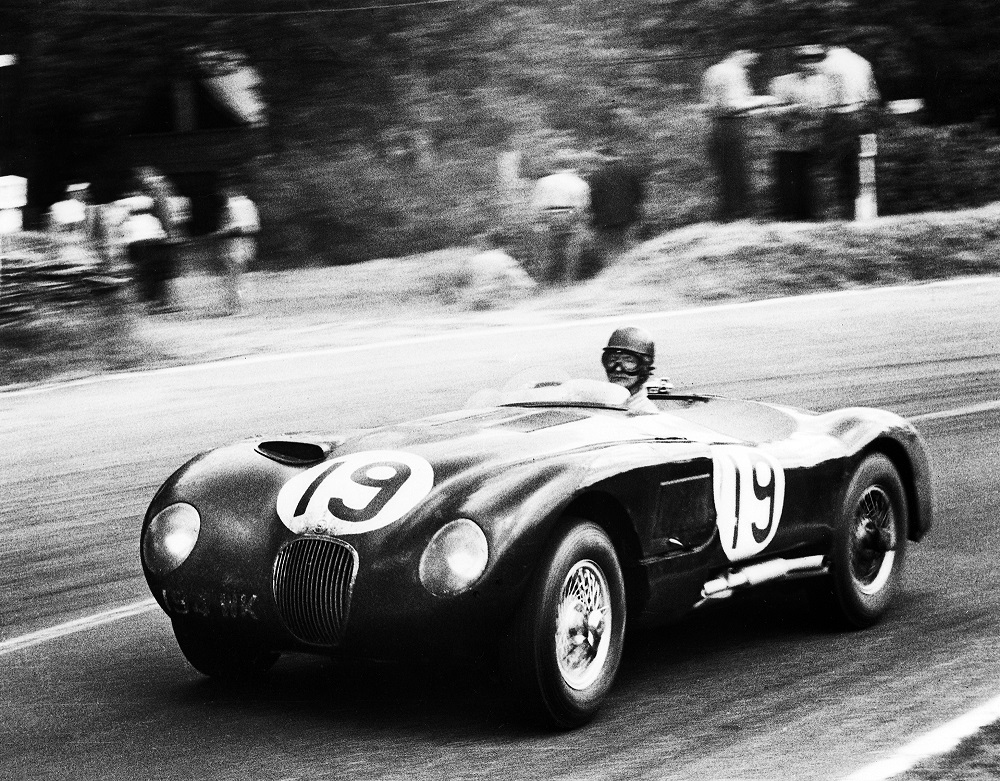 With these brakes, the Jaguar C-Type could brake much later on the straights, braking was smooth throughout the stroke, and could outrun rivals effortlessly. A revolution that made small cars green unbeatable in the 1953 24 Hours of Le Mans, where Jaguar took first, second and fourth places.

After these two victories in three years, Jaguar C-Type became legend, and set the stone for the next 3 victories of its replacement, the D-Type, which brought Jaguar’s booty to 5 wins in 7 years.

The rebirth of the Jaguar C-Type Continuation: 8 examples hand-built by Jaguar Classic

We are therefore talking about a legendary car, which earned Jaguar a place in the Olympus of the best car manufacturers in the world. They were built in total 53 examples of C-Type, and today Jaguar with its division Jaguar Classic has decided to do restart the production of another 8 units. 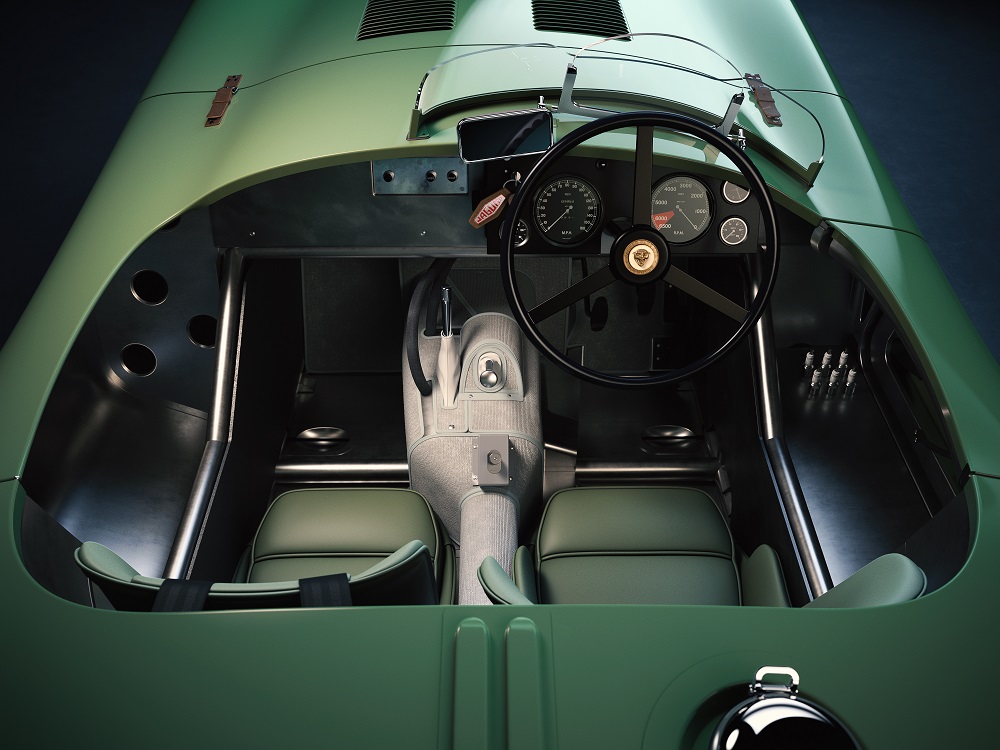 In fact, we are not talking about 8 restorations of existing cars, but just about one resumption of production of the legendary C-Type. This is just the latest car to join the program Jaguar Classic Continuation. In fact, in 2015 the Coventry House decided to resume the production of 6 examples of Jaguar E-Type Lightweight. The racing version of the equally legendary British coupe had been lost in a terrible fire at the Coventry factory in the years of its production.

From the experience gained from decades of production, Jaguar built 6 totally handcrafted E-Type Lightweights from scratch, using techniques of the time and without modernizing any component. The only “poetic license” was the use of modern high-strength steels, which lowered the weight by 114 kg compared to the original of the 1960s. 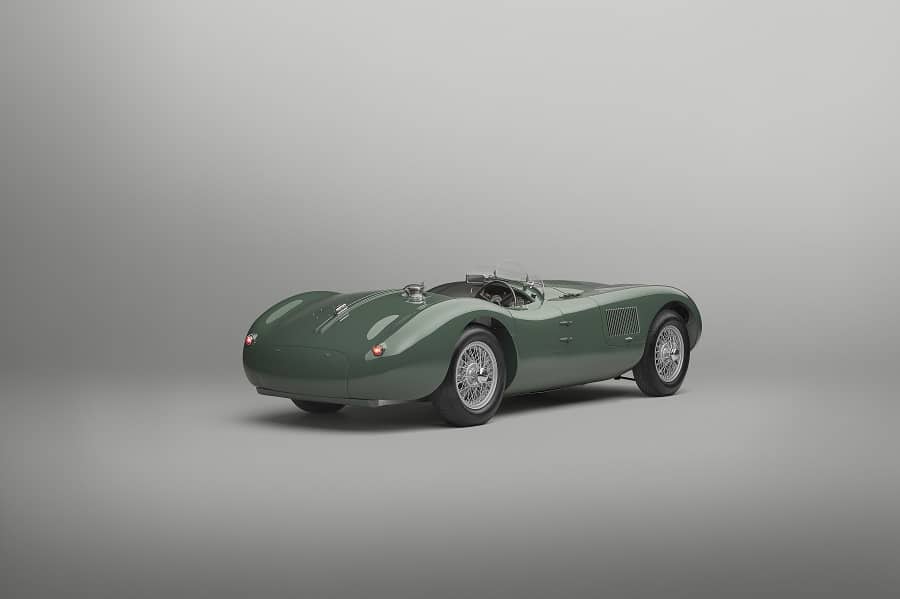 After E-Type Lightweight, the Jaguar Classic Continuation has resumed production of a very limited number of XKSS and D-Types, and today is the turn of the legendary C-Type. All new C-Type Continuations will be built from scratch starting with the trellis frame, passing through the XK engine and the bodywork. These little masterpieces will be handmade by skilled craftsmen in the dedicated plant Jaguar Land Rover Classic Works di Coventry.

The incredible research and restoration of Jaguar C-Type Continuation components

If then the mechanics will remain unchanged from 70 years ago, let’s take a look at what the beautiful lines of the Jaguar C-Type will hide. The specifications taken as the “basis” for the construction of the “new” Jaguar C-Type are those of model that dominated the 1953 24 Hours of Le Mans. We are therefore talking about the first European racing car with disc brakes, which also in 2021 will be made with the techniques of the time and not modernized. To be able to rebuild and replicate all the parts that make up the Jaguar C-Type Continuation, the Jaguar Classic division has created a 3D CAD model, used for the first time by one of their projects. In addition, all the original drawings from the 1950s were used, analyzed and revised, in search of the most complete adherence to the original project. 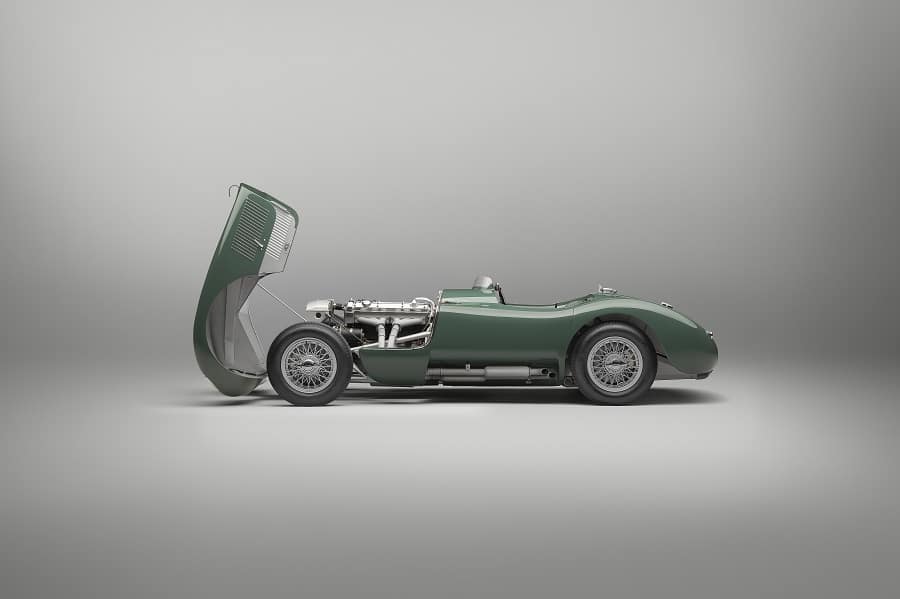 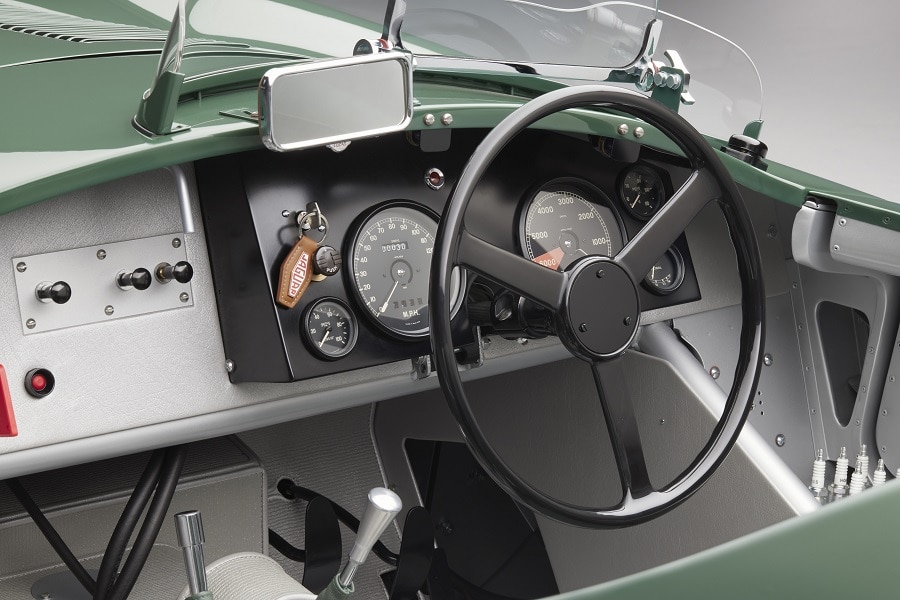 The interiors, the instruments, the windshield and the internal clocks, fundamental in 1953 to measure one’s progress, they were restored, rebuilt and refurbished for Jaguar C-Type Continuation by master craftsmen, as well as even the switch for the ignition has been made with the same specifications as the original. The work developed on the tachometer. This fundamental instrument, in fact, is unique to the C-Type, with counter-clockwise movement and a position exactly in front of the driver. 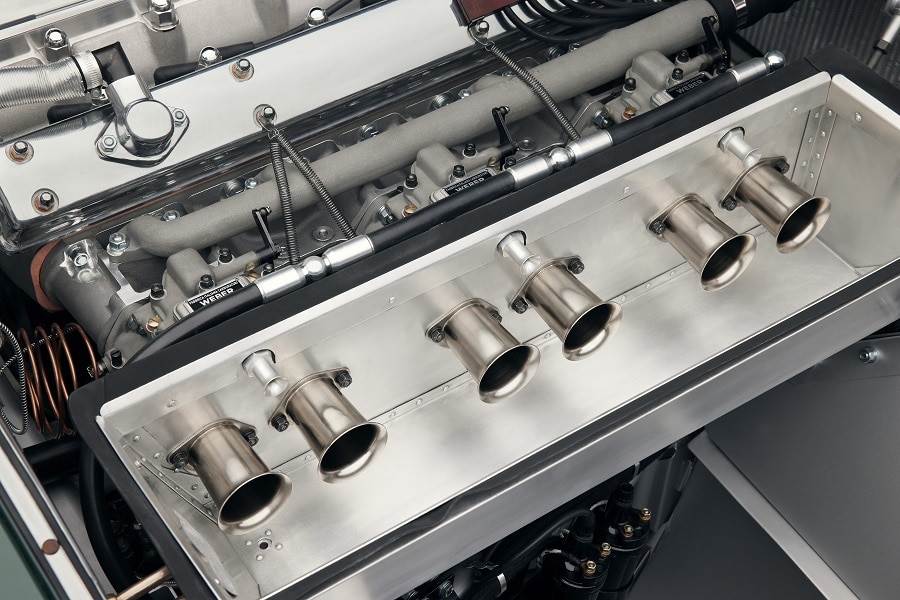 Same question regarding the motor: As with other Jaguar Classic Continuation models, the engine will be reproduced to original specification. So let’s talk about the legendary XK engine, designed immediately after the Second World War and arrived on Jaguar and Daimler models until 1992. In this case, the six-cylinder in-line twin-shaft, rigorously aspirated, has a displacement of 3.4 liters, delivers 220 HP and is “served” by three Weber 40DCO3 twin-barrel carburettors. Every engine needs well nine months to be built by hand, and exactly reproduces the technical specifications of the engine that raced at Le Mans in 1953. The three Weber carburettors, on the other hand, have been meticulously refurbished following very strict quality standards. Even the hydraulic pump for the brake fluid is the original one, from Plessey, and not borrowed from younger models.

The engine is in front-center position, set back behind the axis of the front wheels, the traction is obviously rear and the gearbox is manual 4-speed. The weight remains really low, well under the ton: A racing car with an incredible character and remarkable performance is therefore reborn even after 70 years from its birth, ready to race. Then there are the disk brakes developed by Dunlop, the real novelty of the C-Type that in 1952 beat the Italian competition. 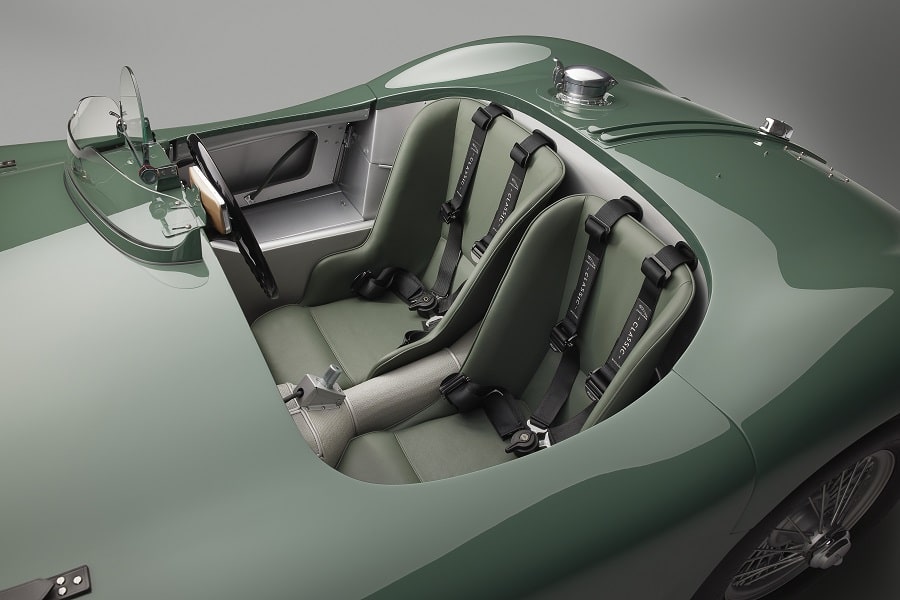 A car like this isn’t meant to be a garage queen, that is a collector’s car and to be kept religiously in the garage. Absolutely not: the Jaguar Classic guys have recreated a C-Type Continuation capable of racing on the track just out of the factory. The seats, in fact, are in leather, but they have a competition seat belt system approved by the FIA ​​that requested the only poetic license taken from the boys of Jaguar Classic. In 1953, in fact, the seat belts … did not …