We tried Overcooked: All You Can Eat; find out in our review if the dish was to our liking or not!

We entered, or at least the writer did, in the best way to write one review of Overcooked: All You Can Eat, that is, without ever having tried the first and second courses of Team17 e Ghost Town Games. Our videogame-culinary ignorance has benefited the neutrality of our taste buds, distancing us a little from Anton Ego’s astronomical gastronomic standards. The basic question is only one: will we drop the pen remembering the simple delight of our aunt’s maltagliati, or are we facing one of the negative reviews “fun to write and read”?

A clarification should be made: contrary to No More Heroes and to No More Heroes 2, both analyzed first on the controller and then on the keyboard by these fingers, in this case we have a real 2-in-1 package. Specifically, we are dealing with a 40 euro offer that includes Overcooked: Special Edition (20) ed Overcooked 2: Gourmet Edition (42,5), DLC included. We do not know if it is all due to the sole inclusion of the first chapter as a remake cooked again in the same oven … sorry, graphics engine of the second, but it is already a point in favor.

The debut “in medias res” of the first half of Overcooked: All You Can Eat puts us in front of the double soul (or quadruple, you name it) of our subject of review. The situation reminds us, with undoubted but welcome ignorance, Crash Bash for PS1: the story mode doesn’t put much effort into concealing the party game nature of the game. We have to feed the culinary equivalent of Devil (and it’s not Antonia Klugmann), but we need practice to do it. The king onion, a healthier version of Katamari Damacy’s cosmic ruler, sends us back in time (to 1993, for unspecified reasons) to travel the world and learn the art of cooking.

The incipit of the second chapter, for its part, literally tears the narrative pretext from the underground. The kingdom of onions this time is under the attack of Pane Malfermo, that is the starchy equivalent of a zombie apocalypse. As the best chefs in the kingdom (“if for this reason also the only ones”), it is up to us to try to feed our unusual clientele … but, again, we will talk about it at the end of the adventure: after having sent us on an adventure with the FurgonChef to stay behind with the little dog Kevin, the king greets us inviting us to collaborate once and for all. And you will really need it. 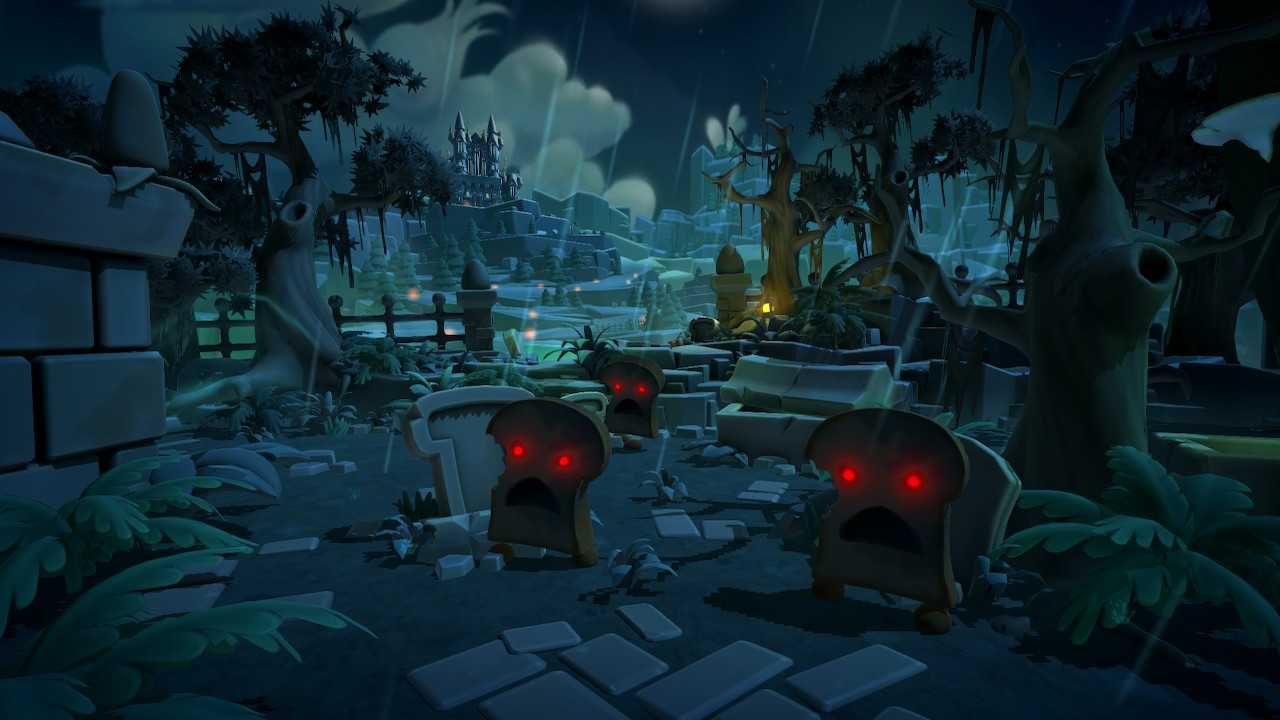 Cuoco-op – Review Overcooked: All You Can Eat

Before continuing in our review of Overcooked: All You Can Eat, a necessary clarification must be made. Despite the savings of twenty euros on the original duology and the “plus point” we alluded to earlier, all this is a little less if you plan to tackle this game alone. The whole experience was conceived with co-op multiplayer (even better if local, pandemic permitting) in mind, and unfortunately the loophole that Ghost Town Games has opted for takes inspiration from The Legend of Zelda: Triforce Heroes for solo play.

Common sense would dictate to do the opposite, but in this case we will have to consider theesperienza in single player as a mere brackets. The comparison with the phenomenal (albeit imperfect) co-op title for Nintendo 3DS comes from the same management of the single player. We don’t have a CPU-controlled ally, we have a second stationary character to alternate with the one we control. At this point he will be our first cook to find himself “in a coma”, leaving all the culinary burdens to his double. The game is still great, but other options would also have benefited players without allies. 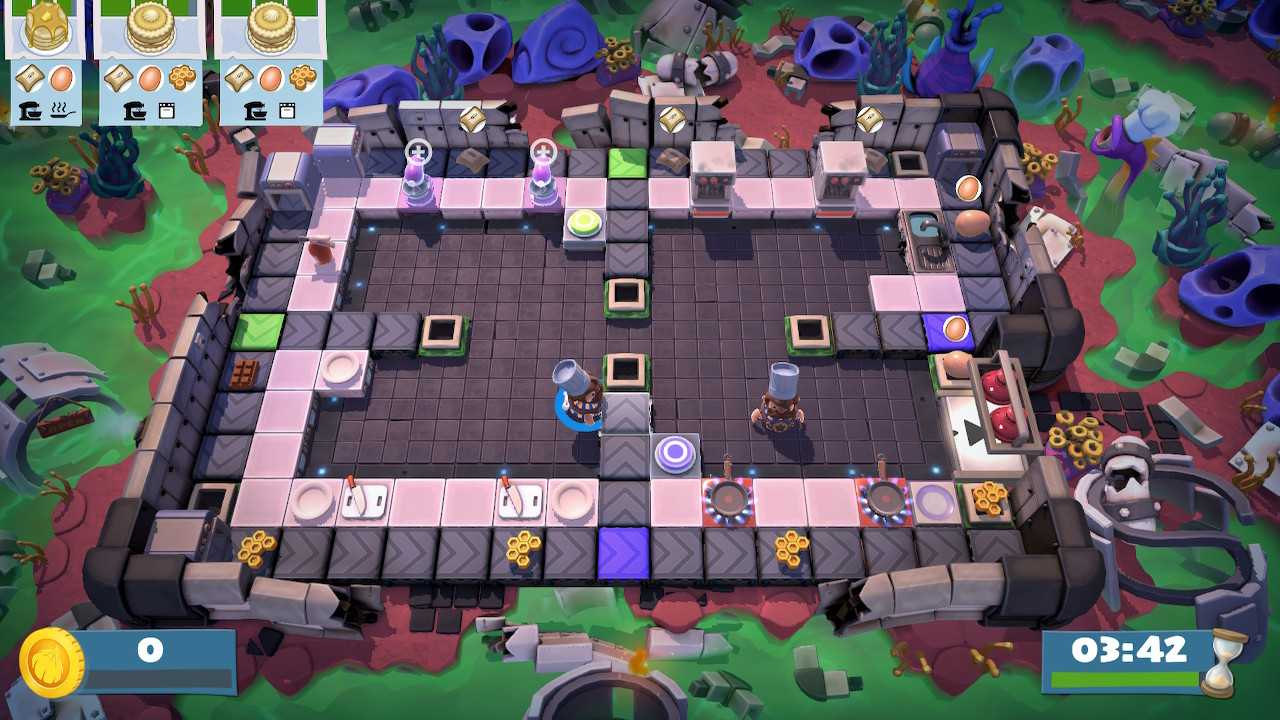 Only Five Minutes Left – Overcooked Review: All You Can Eat

Having made this clarification, we have abundantly finished speaking ill of Overcooked: All You Can Eat. We don’t want to give a short-sighted semblance of perfection, because in the zeal with which the gameplay replicates the frenetic pace of an understaffed kitchen lurks an experience that may not be for everyone’s palates. In principle, however, the basic idea is a bomb in its simplicity. In both games we are dealing with a kitchen framed from above in the style of the aforementioned Zelda, in which we have to extract ingredients, cut them if necessary, gather them, cook them and serve them up.

We talked about simplicity, but not ease, for a reason: just as in reality, here too customers may want to exclude a specific ingredient from a dish. Not surprisingly, in fact, the commands in the upper left corner of the screen are randomiche, and soon burgers without salads, plain pasta dishes, and so on, begin to flock. All this translates into an anticipation not unlike the “Next” box of Tetris, giving the player the time necessary both to plan the next move and to instruct (or be instructed by) the partner on what to do. 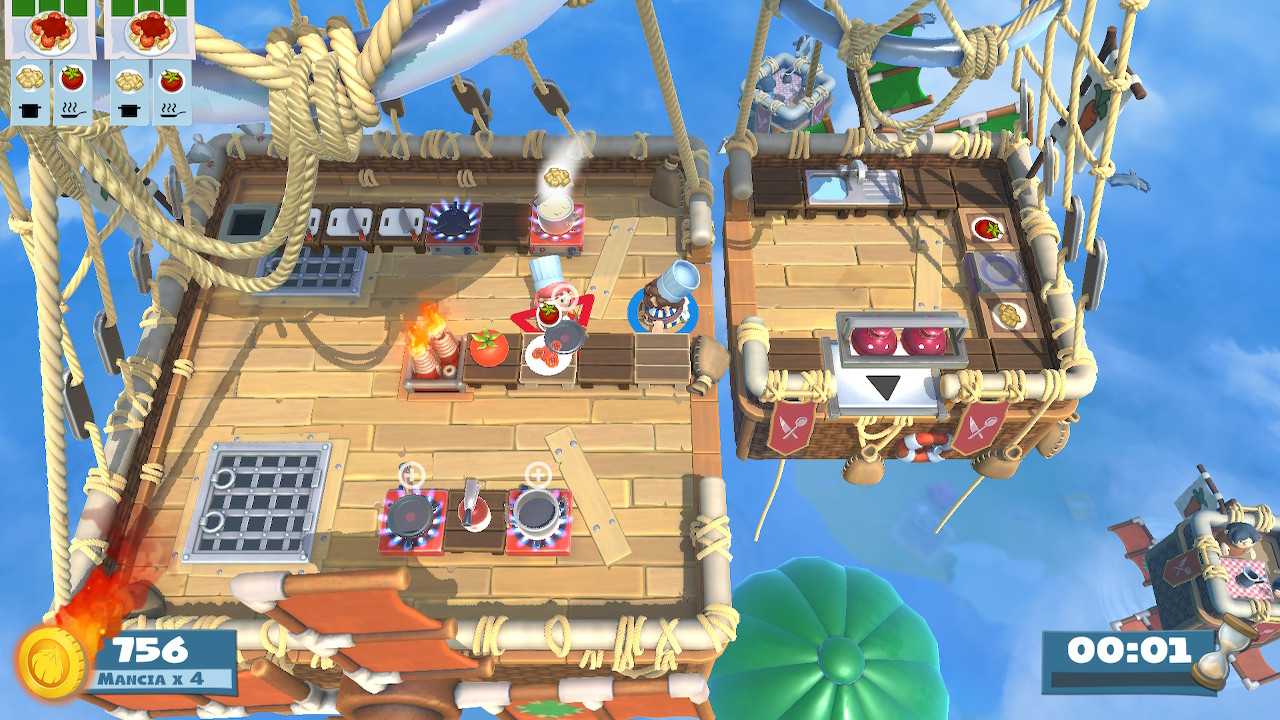 “Rocks fall, everyone dies” – Overcooked Review: All You Can Eat

Half of Overcooked: All You Can Eat is a party game, and a brilliant one to be honest, but this review lacks the spice that defines this experience as one of the many follies possible only in the gaming sphere. Believe it or not, our Tetris analogy was studied too, given the deviations from puzzle game that soon begin to intrude on the countryside. For unspecified reasons, already from the second level we are dealing with an improvised kitchen on both sides of a pedestrian crossing, thus forcing us to make our way between the various pedestrians while we just try to do our job.

As you progress through the levels, things don’t take long to degenerate (in a good way). We have some kitchens set up on moving trucks, others split between two hot air balloons and still others – challenging our suspension of disbelief – split in half by the occasional earthquake. Soon, mechanics like washing dishes and the delivery of dishes they become feats rarely completed perfectly on the first try. Each level can be completed with three ratings: from the minimum wage of one star to the maximum of three. And the road to becoming “star chefs”, as we know, is long and tortuous. 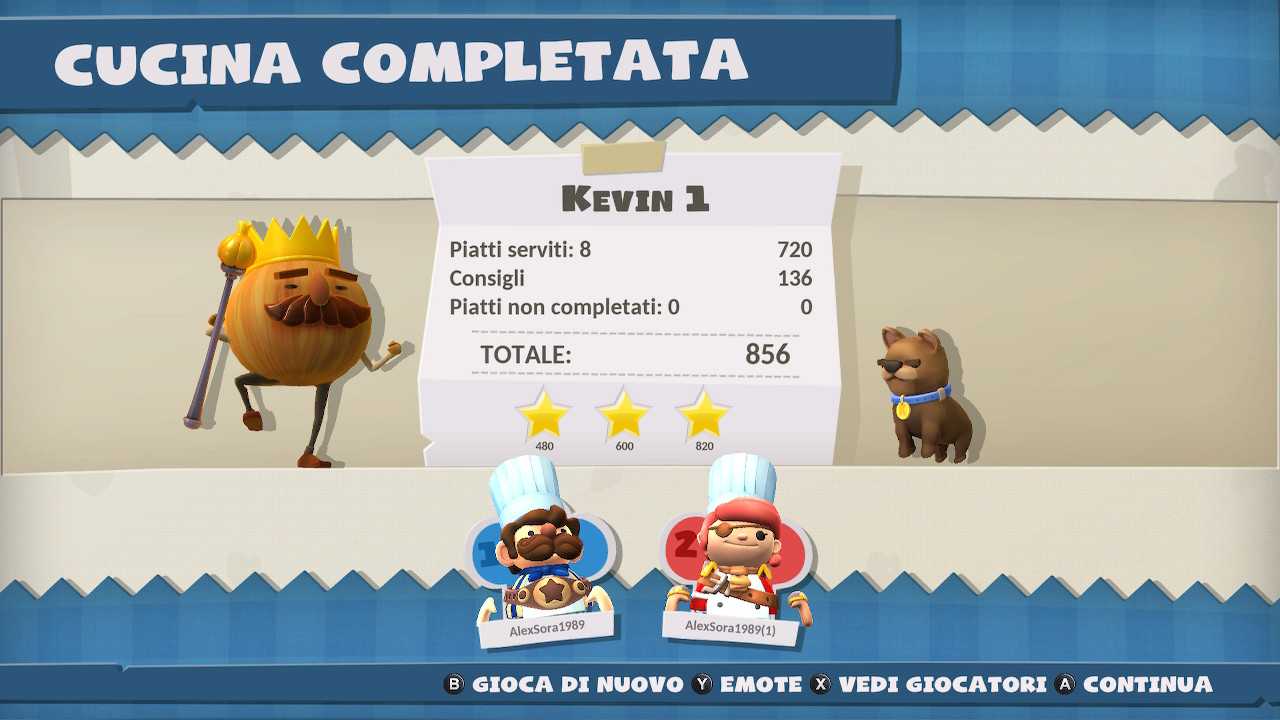 Just a little, that’s enough, Bastianich – Overcooked Review: All You Can Eat

By choosing the campaign to undertake, in Overcooked: All You Can Eat we have two difficulty levels: Normal and Facilitated. In the second of the two, our score continues to rise based on the dishes we manage to churn out while the timer drops slowly (but not too much) to zero. In the first, however, all the errors (burnt dishes in the first place) allow our sweaty points to go down, even reaching negative figures. Given the delusional pace that the matches reach almost immediately (especially for the tapini who will play it alone), we would recommend the easy mode at least for the first sessions.

The unexpected eventsAdditionally, they can divert the pace of gameplay by providing different types of risk. Taking for example the earthquake we mentioned earlier, the fact that one part of the kitchen is periodically raised above the other involves one-way journeys that require careful strategy. Likewise, an invasion of mice puts all food under attack: not just the ingredients, but also (far worse) the finished dishes ready for delivery. And then, the fires cooking involve such a common risk that each level includes a Fire extinguisher at default. 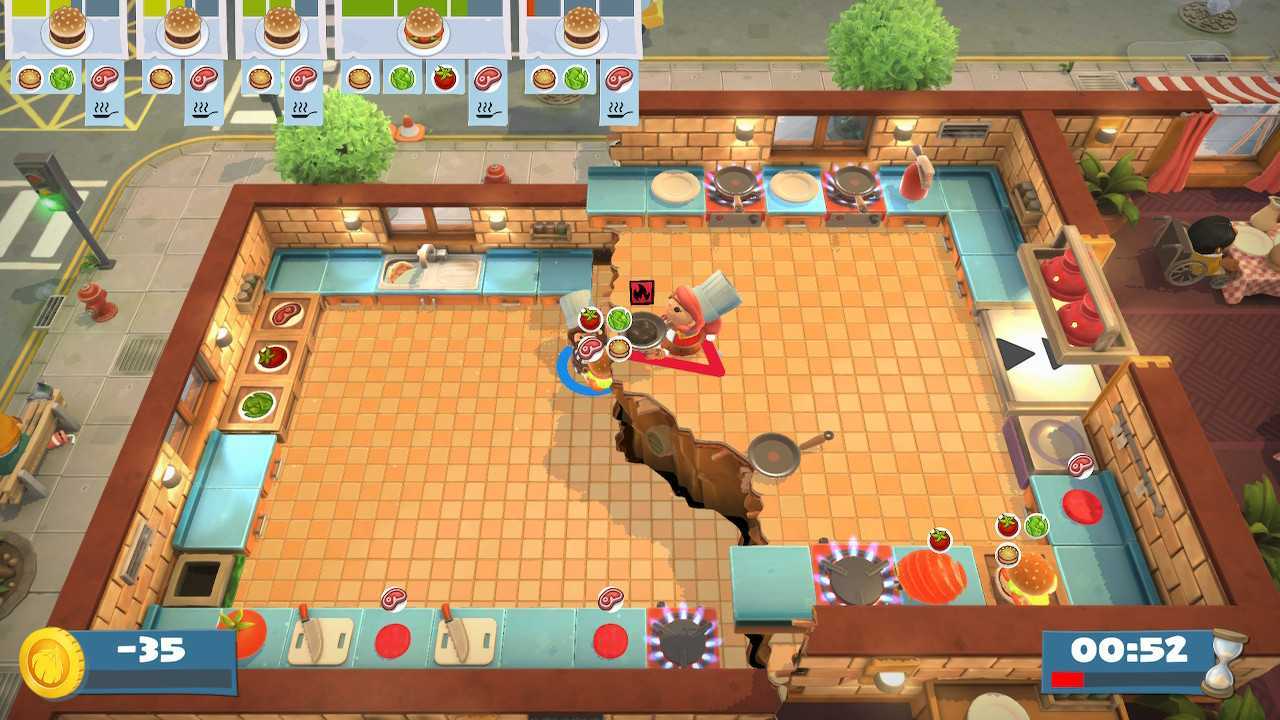 Chuck and Cheese – Overcooked Review: All You Can Eat

Of course, for a party game like Overcooked: All You Can Eat, one could not be missing Arcade mode. And this is where, in another point in favor of the game, the possibility of playing online on multiple different consoles emerges. Unlike Team 17’s colleague Worms WMD, which hosts perpetually deserted online lobbies on Nintendo Switch, the Ghost Town Games title benefits enormously from cross-play even if online co-op is not included in the campaign. As we have already anticipated, this game remains a real bomb until you face it alone.

Arcade mode offers the possibility to face each other in a kitchen for each scenario (Versus) or, alternatively, to face a different cuisine for each scenario (Co-op). Of these modes, only the second (alternating the characters between the hands, of course) can also be faced alone. Given the same graphic engine to unite them, the scenarios taken from one game or the other do not boast particular differences beyond the dangers; simply, as we may not have mentioned before, the second Overcooked implements a mechanic of throwing objects absent in the first. 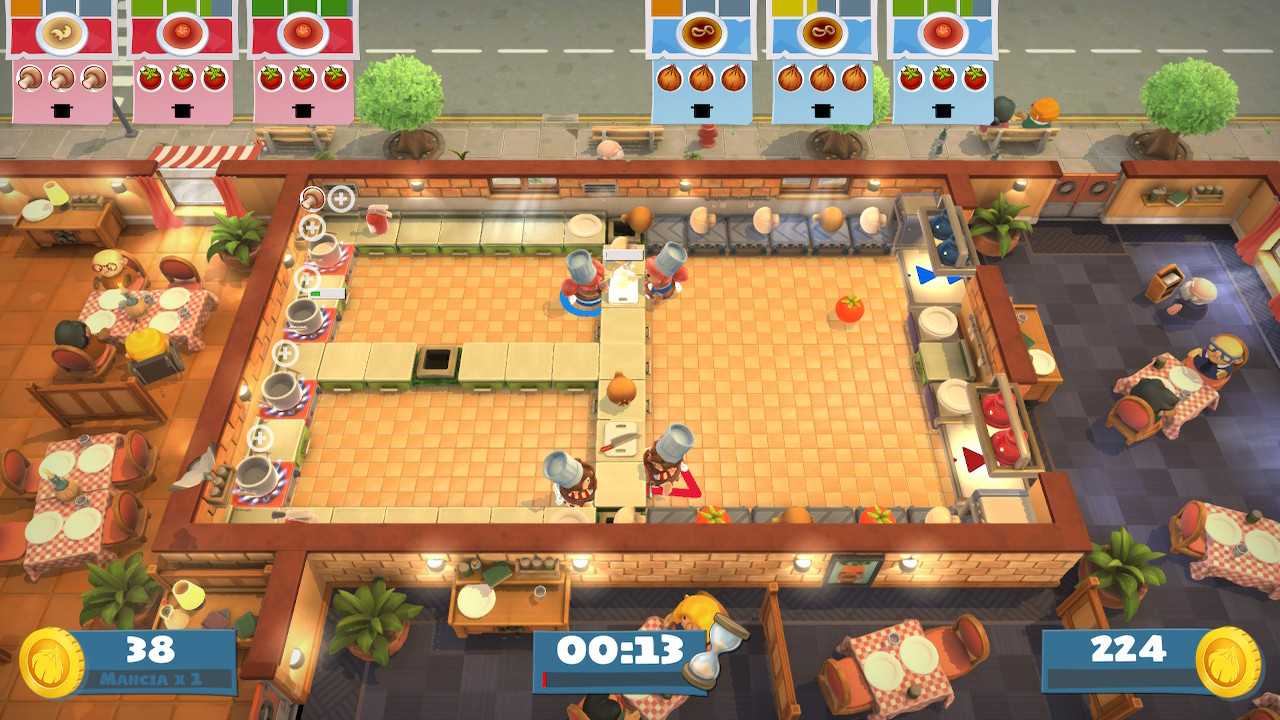 Confirm or reverse the result – Overcooked Review: All You Can Eat

In our review of Overcooked: All You Can Eat, only the dessert remains, that is the evaluation of the technical aspect. Graphically speaking, the “toy” charm in Toys For Bob style permeates every aspect of the game, from the many chefs available (and identical to each other in the gameplay, along the lines of Fortnite) to the animations, passing through the various and colorful settings. Nothing to complain about the modest but stable framerate, for an excellent dish. The menus are simple and functional, but without ever falling into mere minimalism. Well so, in short!

The sound is another point where the artistic direction of the game stands out. We have sounds between Caro Emerald and Kevin MacLeod already at the beginning of the game, and then move on to more illustrious sources of inspiration within the videogame medium. We would have sworn we had felt the influence of Grant Kirkhope, to name a case, and this can only be another point in favor. The sound effects are generic, but they do their duty exquisitely. Now the question is only one: how much will we have spent, diners? The fateful moment has come, and it’s time to take stock; The check, please! 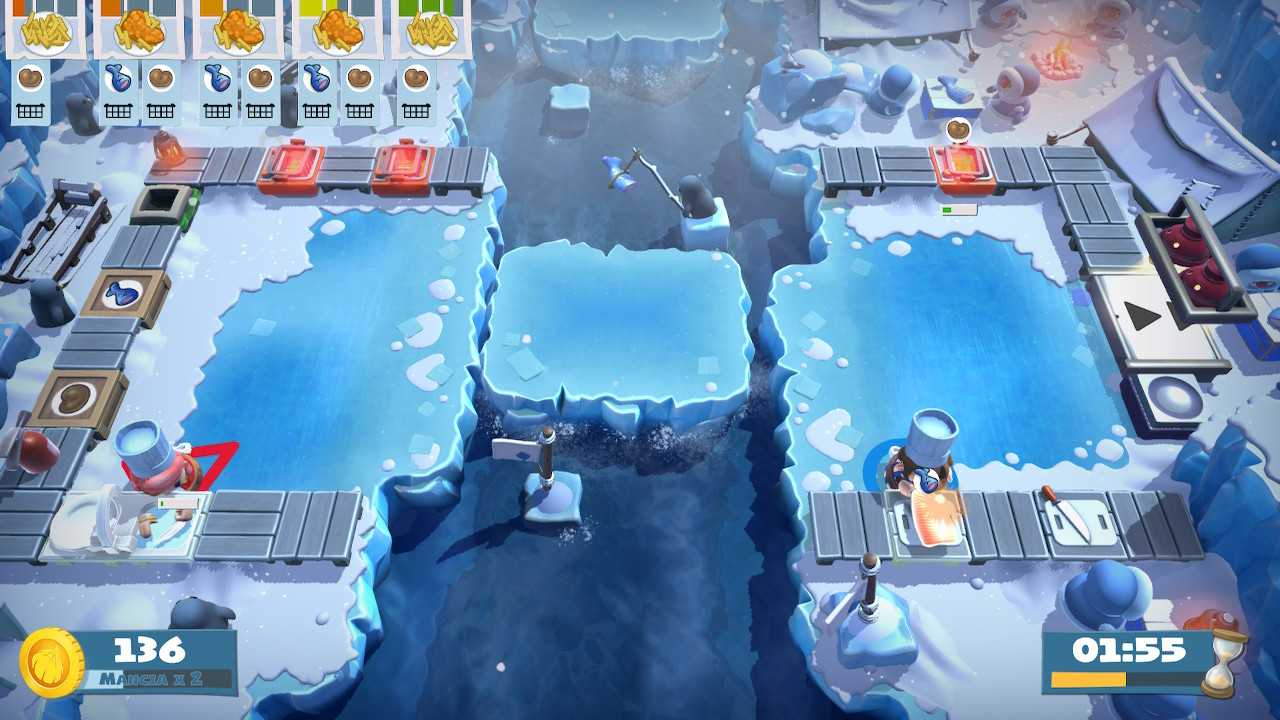 Overcooked: All You Can Eat rimane an exquisite experience, especially for those who haven’t tried the Team17 culinary franchise yet. Our advice is to directly avoid the single purchase of the two games that compose it and to immediately throw yourself on the complete buffet, given the inclusion of all DLC released so far. Maybe it lacks a bit (a bit much) of raison d’etre if played alone, but with friends it can spice up any afternoon … or evening, like first-party titles like Mario Kart 8 Deluxe and the lesser known (but cheaper) Flip Wars. Enjoy your meal!

This was what we thought. But what is your opinion? Tell us below, and as always do not forget to stay on TechGameWorld.com to read other reviews and get all the most important news on the gaming sphere and beyond. For your gamer needs, you can find the best ones instead …