Return to Monkey Island, our review.

“Greetings! My name is Guybrush Threepwood, and I want to be a pirate! ‘ Thus began in 1990 The Secret of Monkey Island, a LucasArts game with which Ron Gilbertassisted by Tim Schafer e Dave Grossman, has definitively cleared the graphic adventures in the collective imagination, hitting an irresistible mix of demented humor, piratical atmospheres and bizarre puzzles. A joke soon surpassed by a much more peremptory “My name is Guybrush Threepwood, and I’m a fearsome pirate”, a real catchphrase of the first chapter and of the successful sequel Monkey Island 2: LeChuck’s Revenge, also carried out by Ron Gilbert before of his abandonment of the franchise and the subsequent wavering episodes.

On closer inspection, in these two lines there is all the sense of a saga that for more than 30 years has literally haunted gamers all over the world, and which today can count on the new now unexpected chapter Return to Monkey Island, developed by Ron Gilbert with his Terrible Toybox is available on PC, Mac e Nintendo Switch. On the one hand, the “I want to become a pirate” of the anti-hero par excellence Guybrush Threepwood, eternal child and staunch supporter of the wildest nonsense, he connects us with the child in all of us, who led Gilbert to imagine a hilarious pirate universe starting from the attraction of Disneyland Pirates of the Caribbean (the same that inspired the film series with Johnny Depp).

On the other hand, that “I am a fearsome pirate”, said by someone who is not at all fearsome and who became a pirate after a series of insulting duels with a series of ugly thugs. Melee Islandreaffirms the power of storytelling and narration, which at times can be even stronger than reality.

Return to Monkey Island, the review: the best sequel possible

It is precisely on the childish dimension of the adventure and on the saving power of the stories that Return to Monkey Island is based. It does so by starting exactly from where Ron Gilbert had stopped, or from that amusement park inside which Monkey Island 2: LeChuck’s Revenge closed, leaving us the suggestion that the adventures of Guybrush and his nemesis LeChuck they existed only in the fervid imagination of two small and undisciplined urchins. An open epilogue for a milestone in video games (we talked about it in depth here), from which it was not easy to continue. The third chapter The Curse of Monkey Island had tried it with a difficult work of narrative balancing act; the tutelary name of the Ron Gilbert saga does so in a much more coherent, albeit somewhat unsettling way.

As in an episode of How I Met Your Mother, we find Guybrush intent on narrating to an audience not entirely convinced of his unprecedented adventure, the one that finally led him to discover the infamous Secret of Monkey Island. A mystery we have been puzzling over for decades, obsession of the protagonist and consequently of the perfidious LeChuck, more aggressive than ever. We then return to the unforgettable Mêlée Island, the same and at the same time radically different from the one we left more than 30 years ago.

The faces are the same: Wally the cartographeralways struggling with new maps; Stan S. Stanmanwhich continues its controversial relationship with marketing and the law; Voodoo Lady (whose name we finally discover) and its exaggeratedly vague aphorisms; but most of all Elaine MarleyGuybrush’s soul mate who with a motherly attitude is now resigned to his obsessions, as well as ready to put a patch on the inevitable disasters he caused. 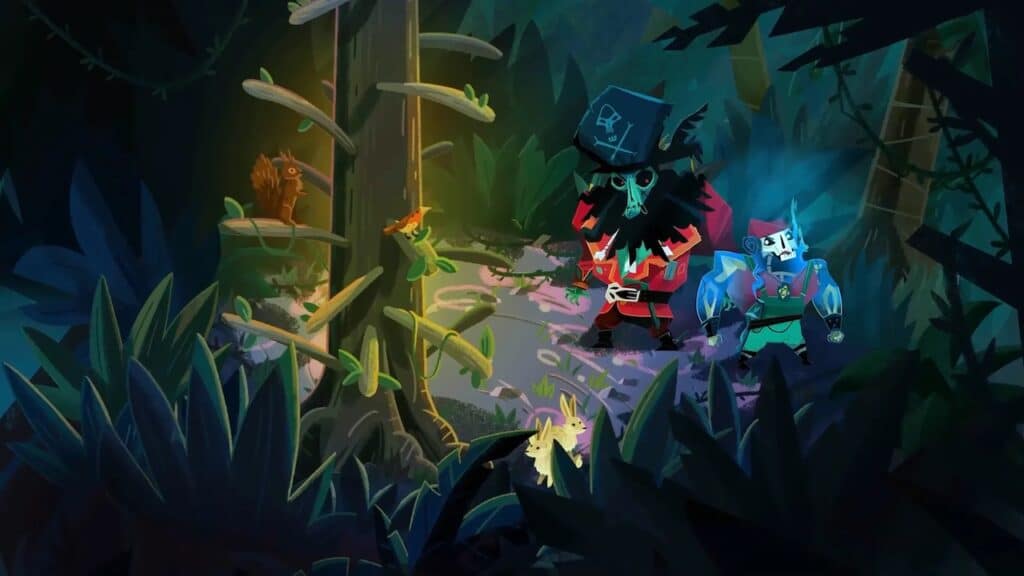 Instead, the context around Guybrush changes, starting with the technical one. After the successful Thimbleweed Park experiment, Ron Gilbert sets aside both his characteristic pixel art and the point-and-click interface common to most LucasArts games, focusing on an edgy visual style, with almost cubist nuances, and on a game system more minimalist and at the same time refined, essentially composed of only two buttons (the left and right of the mouse) and variable actions based on the nature and purpose of the objects with which the protagonist interacts. A choice that has inevitably led to harsh criticism from the most conservative and uncompromising wing of the fans, not predisposed to change.

After an understandable initial feeling of disorientation, the goodness of Ron Gilbert’s choice clearly emerges: the graphics of Return to Monkey Island give new life and vigor to the locations we know well, while the game system is definitely more in step with the times, as well as functional to the enjoyment of history. Two essential but not obvious features should also be underlined in this sense: the possibility of running Guybrush with a simple double click and the various shortcuts that shorten the protagonist’s journeys, especially useful when it comes to solving puzzles involving objects scattered on various islands. .

However, the pirate world is also changing, through a real revolution. The three pirate leaders have been deposed (we will find them involved in a surprising new activity), and in their place there is a new female-driven clan willing to break with the past. 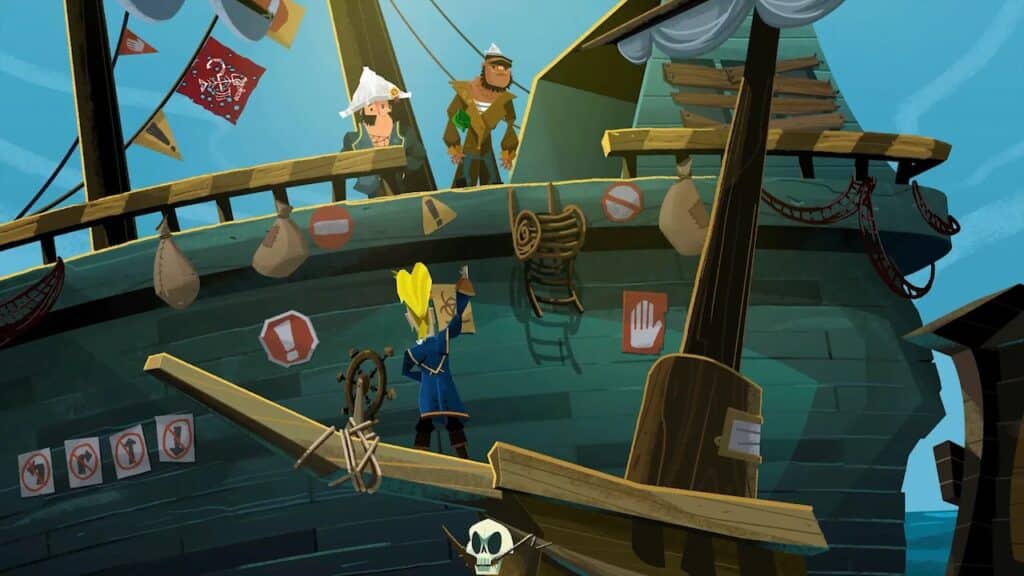 Irony is the only weapon left to Guybrush, who wanders the archipelago seeking in vain recognition for his deeds and invariably finding himself mocked by everyone, with positive reflections on the various gags set up by Gilbert. As if all this were not enough, the islands have to face a difficult epidemic of scurvy: a little lime would be enough to stem it, but it is essential to remove all medical evidence from the dissemination activities, so as not to make the various detractors of science suspicious. In practice, the most insane part of our reality that fits perfectly into the zany universe of Monkey Island.

Old and new locations become the scene of an impressive multitude of puzzles, all aimed at Guybrush’s discovery of the mysterious Secret of Monkey Island. However, there is no need to worry about it: Return to Monkey Island can in fact count on two difficulty levels and above all on the list of objectives and on the help book, which respectively allow you to always have an eye on the purpose of the current mission and receive useful suggestions, with an increasing level of specificity. Compared to the past, the lower difficulty of the puzzles is evident especially in the first part, which acts as a real tutorial of the game for newbies and not. With the succession of the parts of Return to Monkey Island (5 in total, for about ten hours of overall gameplay), the difficulty increases slightly, but for gamers the help book is above all an unnecessary temptation to accelerate their progress in ‘ adventure. 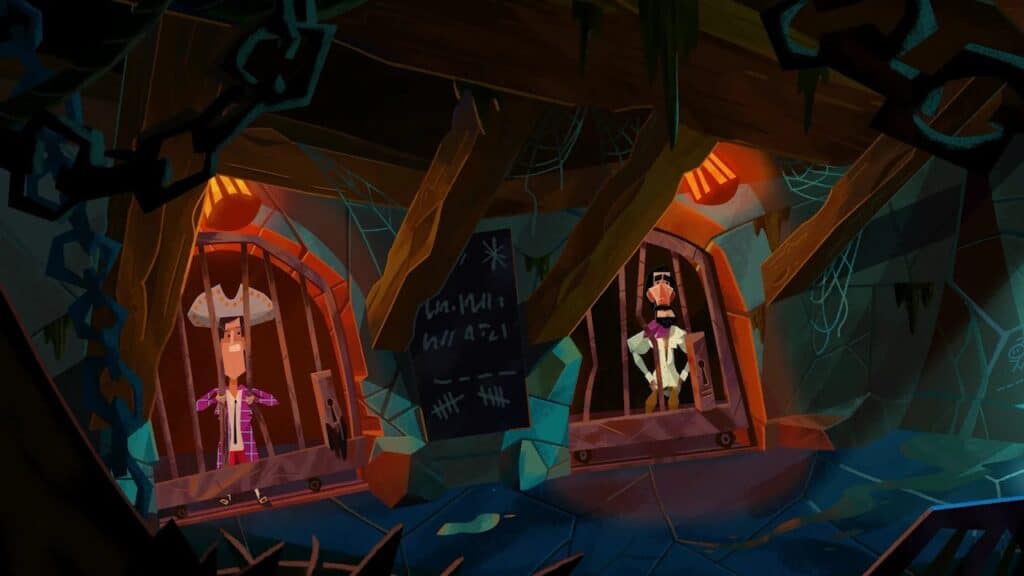 One of the biggest fears on the part of fans about Return to Monkey Island was the series’ distinctive humor, potentially dulled by the decades that have passed. Also in this case, Ron Gilbert surprises us positively, keeping the goliardic spirit of the previous chapters unchanged. Between puns, Guybrush’s shrewd comments, returns of old acquaintances, references to objects indelibly imprinted in the mythology of the series (yes, even the rubber chicken with the pulley in the middle) one has the pleasant feeling of being at home, in a universe in change but constantly true to itself.

The carefree and at times delirious atmosphere of Return to Monkey Island, enhanced by a soundtrack in perfect balance between the past and modernity, does not prevent Ron Gilbert from letting a veil of tangible melancholy fall on the story, which becomes food for thought on the flow of time and on the very concept of narration. As the explanation of the Secret of Monkey Island approaches (with an ending that will undoubtedly thrill and debate fans), we realize that, just like Indiana and Henry Jones’ quest for the Holy Grail, this unlikely mission is nothing else. what a way for Guybrush to feel still alive and to fly for the umpteenth time on the wings of fantasy. In the midst of lightning-fast jokes and hilarious curtains, in fact, we witness several times the disappointment of the protagonist after the discovery of reality, usually less exciting than the imagination.

A sort of artistic and narrative manifesto by Ron Gilbert, who does not fail to underline the concept with numerous reflections on how a story is told and why it is done, effectively bringing his personal vision of the story in the midst of the deeds of this bizarre and hilarious group of characters.

Return to Monkey Island review: is it really the end? 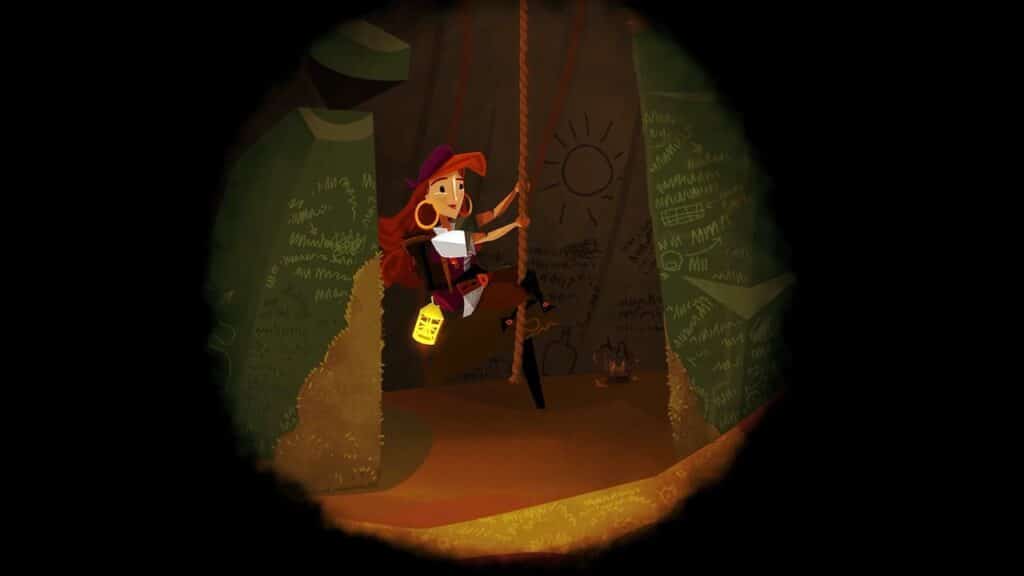 Return to Monkey Island is the best sequel possible (but there is room for improvement: the ending leaves more than one door open for further sequels), because it doesn’t just give us an exciting new journey into a universe loved by several generations of gamers. , but it does so by confronting us with the fact that the world changes, and the stories we are fond of change with it. We thus find ourselves observing Guybrush’s ingenuity mixed with cunning with the same good-natured look of Elaine, aware of the fact that the man he loves is, for better or for worse, the fruit of that childish and awkward vision of the world.