Airborne Kingdom returns to our screens, this time also for the players of the new and old generation consoles: in this review we will analyze the strengths and weaknesses of the PS4 version of the game, so that you have an idea of ​​how the city-builder behaves too. with controller in hand

For those who are not aware, Airborne Kingdom is a very peculiar style city-builder developed and released almost a year ago by The Wandering Band on the Epic Games Store. Appreciated by critics and audiences (it also received a BAFTA nomination for best debut), it has recently been revived in an updated version also for PS4, PS5, Xbox One, Xbox Series X|S e Nintendo Switch.

This release also includes all subsequent additions long requested by fans, such as the creative mode, a Difficult level mode and also the functionality of the new game plus, which allows you to restart games with the same save as before. Let’s see together then, with this one review, how it behaves Airborne Kingdom su PS4, and how these changes can improve the gaming experience.

As unusual as it may seem, even games of this type can be led by a narrative context that helps the player proceed with interest through the campaign, and Airborne Kingdom is no exception. For those fasting, let’s summarize: the Airborne Kingdom is, as its name suggests, a flying kingdom which is said to have existed in an ancient era: that kingdom, traveling through the three regions of the game world and its twelve terrestrial kingdoms, giving knowledge, culture and tradition, carrying prosperity everywhere. Still in these ancient times, however, the flying kingdom vanished, abandoning all other realms.

Over time, all earthly kingdoms split apart and they isolated each other, making the story of the flying kingdom alone a distant dream. One day, however, some are found inscriptions containing instructions on how to recreate the flying city: your journey in the reconstruction of the flying kingdom and in an effort to bring all earthly kingdoms together, so on restore that long lost prosperity. Having said that then, we can proceed to the actual review of the PS4 version of Airborne Kingdom. 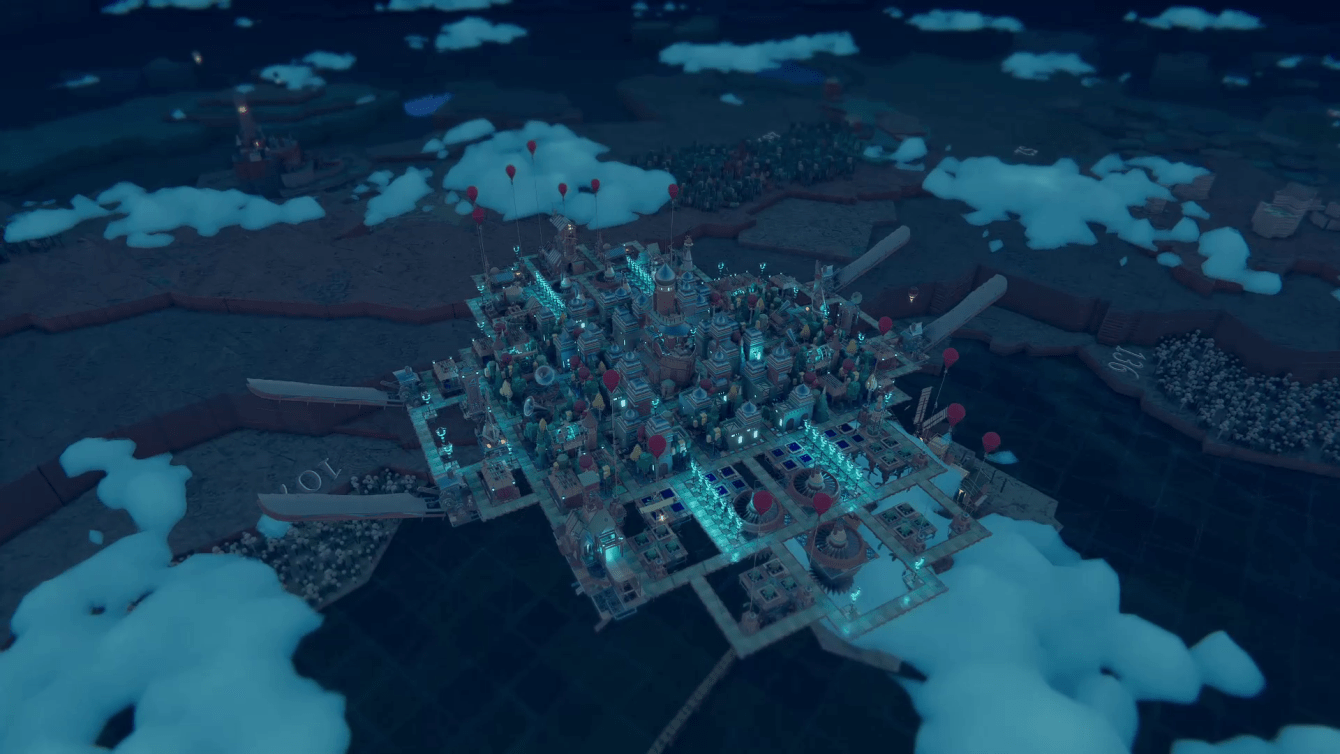 Your main activity during the Airborne Kingdom game will be that of travel around the game world, collect resources and meet civilizations. Your very first goal will be to build some home for your first inhabitants and a hangar to have a chance to send planes to gather resources the earth. The resources have several uses: the forest wood will be used to build buildings, the food of the groves e the water of the lakes they will feed your people, the coal it will be used to have fuel to ensure the movement of your city, and so on.

As you advance, you will quickly unlock the building of the academy, which will guarantee you a generation of science to advance in the search tree: as in any management software, the research tree will be used to unlock new useful buildings and various upgrades which will improve various aspects related to the city. Without bothering to explain every single element (as we believe better find out for yourself), know that as you progress in your campaign, through exploration and research, you will unlock various elements, including buildings, machinery and resources, which will make the gameplay more and more varied as you advance. 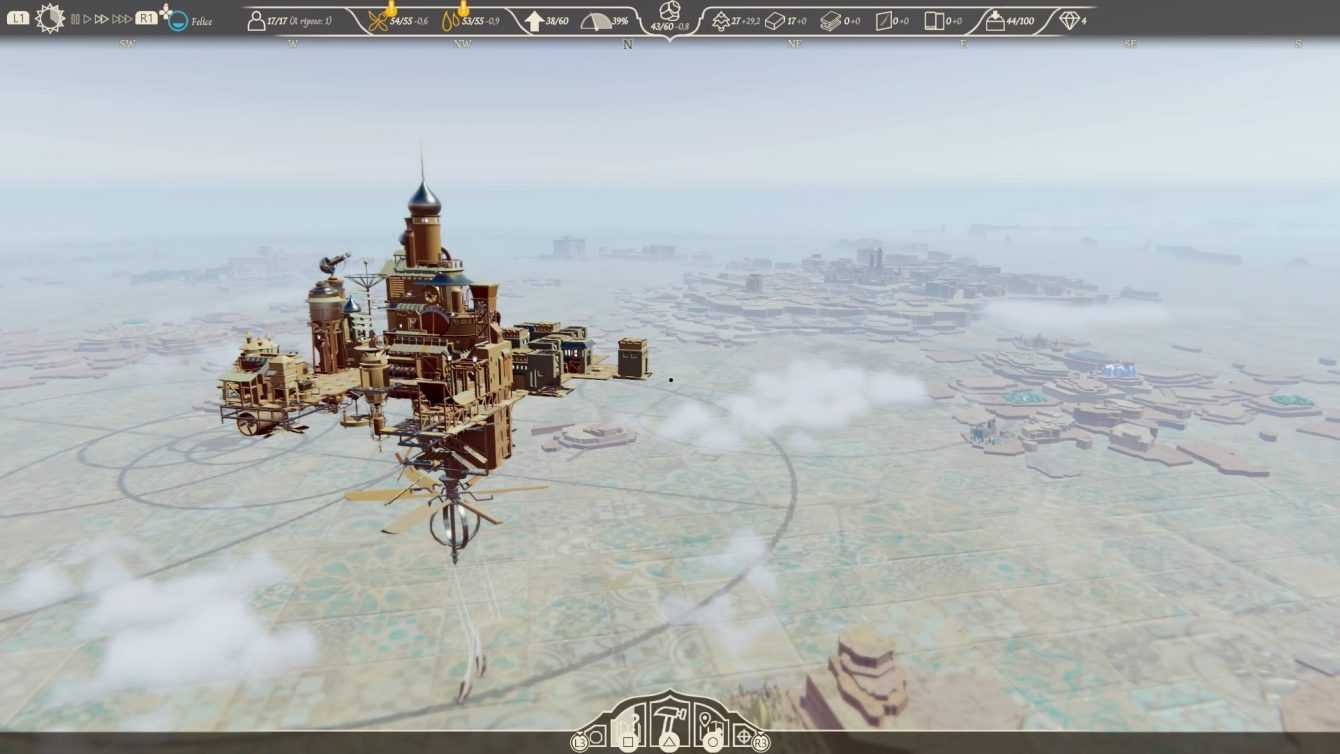 Keeping in mind that your goal is to reunify the earthly kingdoms, during your trip you will come across in their main cities. After you get in touch with a city, in addition to the possibility of trade resources with them and of buy projects (available for purchase through relics found in the ruins around the map) to unlock new buildings in the research tree, it will give you one mission to be completed in order to count the kingdom among yours allies. The kingdom will become your ally therefore only once this mission is finished, by sending new inhabitants in your city that will allow you to grow further.

Speaking of inhabitants, growing your kingdom means hosting more and more of them to have more workforce, but that involves you building an adequate number of houses to host them. By accumulating a certain number of buildings, you will realize how too balance of your structure is fundamental: if you build too much on one side or another, your city it will tilt, negatively affecting the morale of the population. Proceeding in the review of Airborne Kingdom for PS4, in the next paragraph we see the impact of the new additions in this new edition. 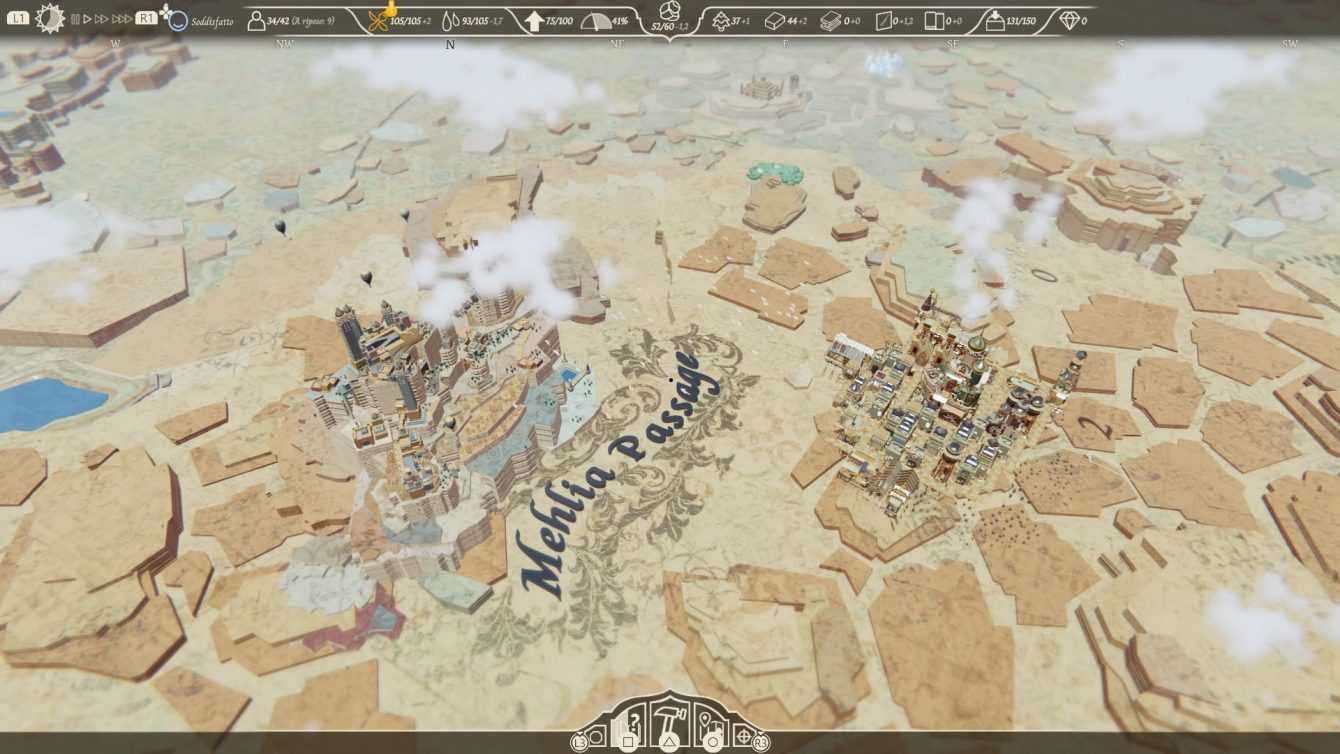 The Other Modes – Airborne Kingdom Review for PS4

The plot of the campaign and the soundtrack help to arouse the interest of the player with constancy in the exploration of the map. There total absence of war mechanics and the presence of a tutorial that explains from the beginning all the elements of the gameplay (even the simplest ones) make it clear the intention to create an experience not high difficulty. Despite this initial intent, many fans of the genre criticized the choice, being used to a higher level of challenge.

Thanks to difficult mode, those looking for an experience of high difficulty will have bread for their teeth. The other two modes are also absolutely welcome. On the one hand, the New Game Plus confirms that the developers have a simple but very functional way in their hands in increasing longevity of a game without losing the previous save. On the other hand, the creative mode allows you to try another type of approach to Airborne Kingdom, released from the posts imposed by the limited resources and thus making the experience even simpler and more free. 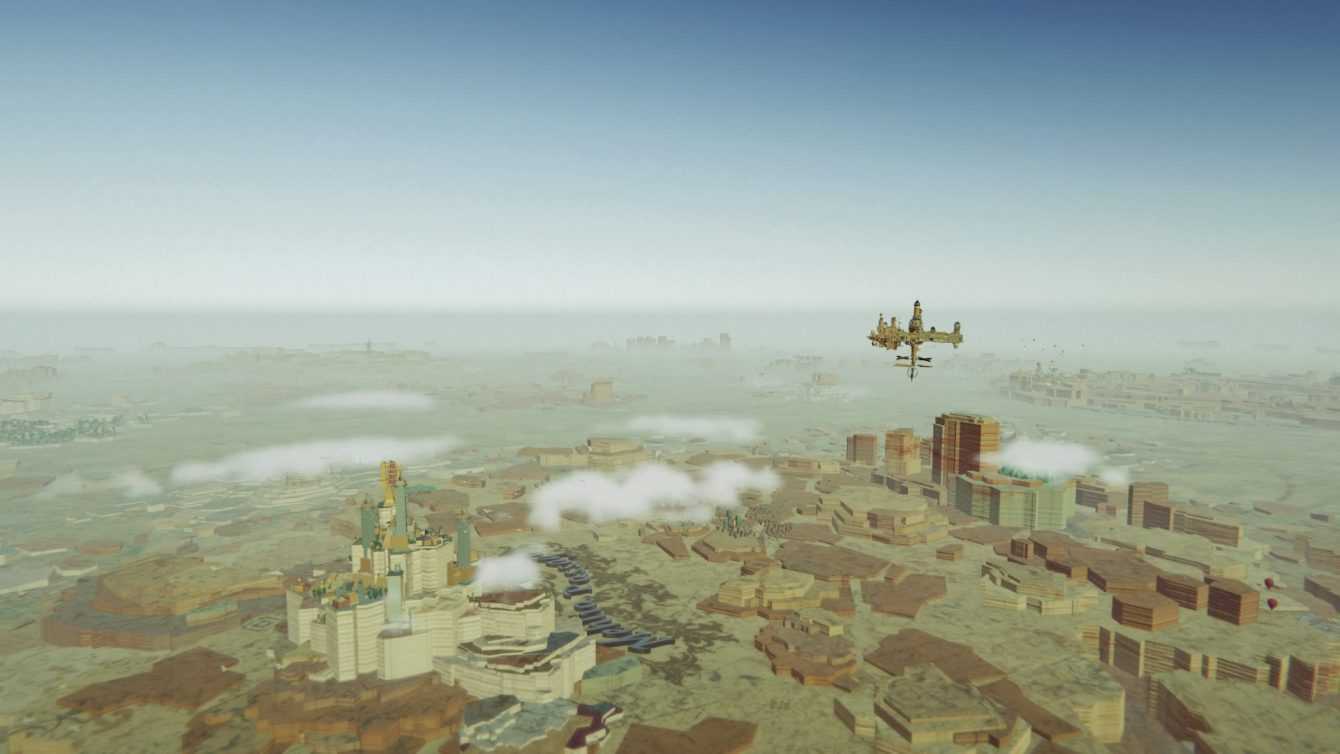 On the technical side instead? – Airborne Kingdom review for PS4

A part is given using the keys on the controller You can say satisfying, as the developers of The Wandering Band have managed to make a game designed for PCs easily playable even through a Dualshock, the same cannot be said interface. In fact, it appears to have the same proportions compared to the PC version: while on a desk monitor the writings are easily readable, but when we play with them on the sofa with a farthest screen reading everything can become much more tiring.

From a purely visual point of view, we obviously find the same minimal but refined graphic style that distinguishes the title. The high standard of customization of materials, colors and lights of each single building it also helps to create an additional important element of interest for the player. The fact that the game is instead locked at 30 FPS and that the resolution is not particularly defined does not make the game fully satisfactory from a technical point of view (this obviously is a limited criticism of the PS4 version of Airborne Kingdom analyzed in this review). 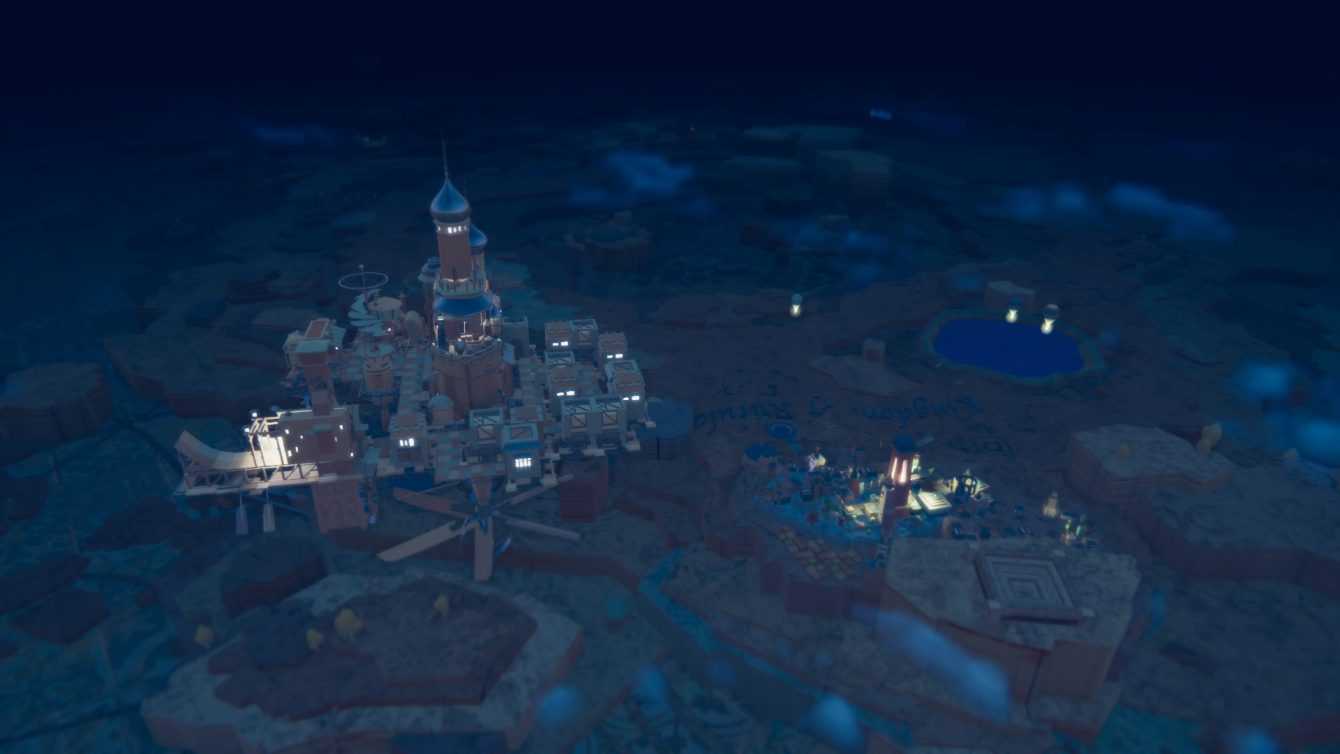 Airborne Kingdom is a management city-builder simple and accessible in its standard mode, but also capable of offering a good degree of challenge in difficult mode: this gives a very important strength to the title, as it makes it capable of attracting both novice players and more hardcore players. The innovative idea of ​​a game in which to develop a flying city allows the title on the one hand to embrace the usual patterns of its kind, but also of innovate introducing completely new game mechanics. Although the title was designed for PC, the console release a year later can only be approved, despite some technical flaws (mainly related to the old gen version) which make it less preferable than the others.

At the end of this review of the PS4 version of Airborne Kingdom, does the ball pass to you? What is your take on the game and the opinions seen in this review? Waiting for your response, we invite you to stay tuned on the TechGameWorld.com pages for all the most important updates in the videogame field. If you prefer to buy game keys at discounted prices, you can go to Instant Gaming.