Alan Wake has marked the imagination of many players over time. Let’s retrace all the stylistic features and literary references that shaped Alan Wake’s narrative

It is not surprising that Alan Wake has re-entered the pantheon of the most beloved games of all time. Especially thanks to the new remastered version recently released on the shelves. With Alan Wake Remastered, all gamers, now even the PlayStation ones, were able to get their hands on the cult game originally released on Xbox 360 back in 2010. The appreciation of the public can be found, not only in the numbers of Metacritic, but especially for the numerous articles special, video for in-depth study e debates in live streams that have taken place over time. These have powered a fervor and exchanges cultural which can only be good for everything videogame sector.

Reflecting in a way critic on the various aspects of the videogame, is an activity that denotes the maturity of the medium. In fact, it often happens that game designer and creatives to use for their video games references cultural originating from meaning e media different. This is why it is interesting to try grasp these references to build discussions fruitful. Anyway, despite the different years behind, Alan Wake always manages to be modern and continues to fascinate audiences, both old and new. Let’s go into this special to retrace the many references literary and stylistic influences they gave body and soul ad Alan Wake. 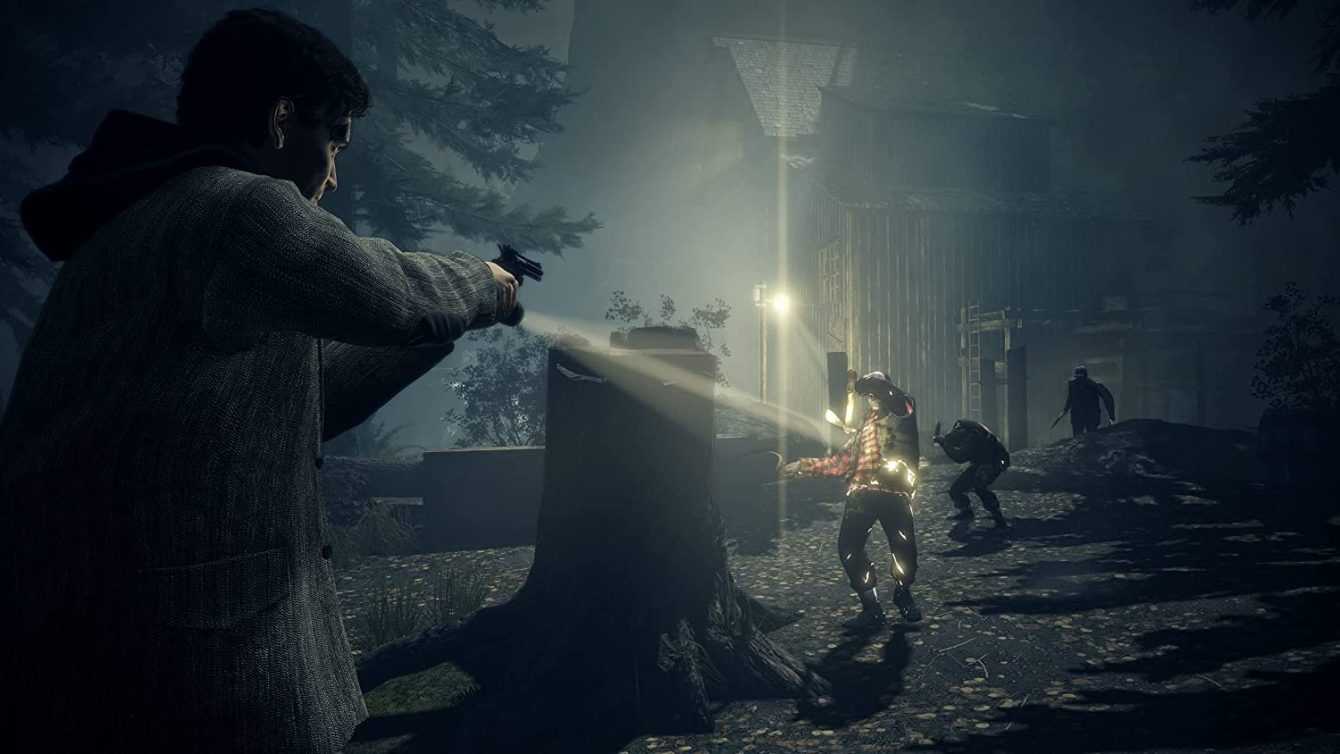 It is not a lake, it is an ocean

As mentioned, the title remained in the hearts of many players and still others are discovering the fantastic world. Will be the issues addressed, it style detail of the narration, or still a gameplay always fresh, dynamic and cinematic, albeit with some uncertainty and repetitiveness in the progression. As many have already highlighted, among the elements of inspiration for the story appear, in addition to elements medial cross, archetypes and topoi of literature ranging from Gothic of the ‘800 to post-modern. Between Lovecraft e Stephen King, the mystery on which it prompts us to reflect Sam Lake, creator of the multiverse Remedy, it is of nature metanarrative. The mysteries and shadows that envelop Bright Falls and the events of Alan Wake are steeped in history and references literary.

The game begins with the arrival of Alan e Alice, his wife, in a quiet town North American at the edge of a lago called Cauldron Lake. Alice almost forced Alan to go there, to rest a few days and thus make up for the writer’s block which is hindering his creativity. Once settled at the hut in Diver’s Isle, islet in the shape of a bird’s foot that rests directly on the waters of Cauldron Lake on stilts, Alan hears a noise sudden and he notices that his wife Alice is disappearance suddenly. Realized that Alice probably is fall into the lake, plunges into it without thinking twice. 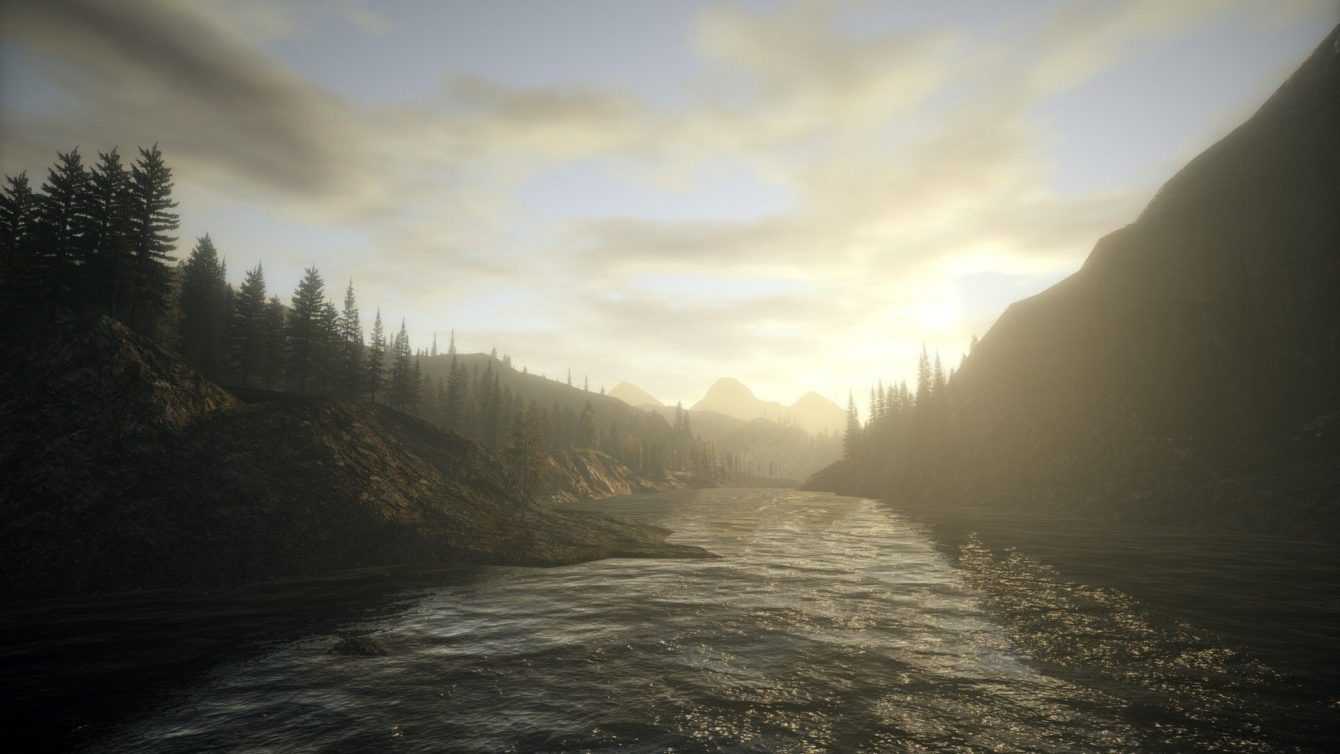 The lake is a place mysterious, whose waters hold so much power incredible how much dangerous. Its power is that of make it real any work of fantasia. But the journey from the ordinary to the extraordinary world, unfortunately, is a journey one way. Once you get in touch with the presence, going back will be impossible. From here begins Alan’s adventure in an attempt to to report Alice to reality and to defeat the Dark Presence.

An adventure in which Alan will be accompanied by his literary agent, as well as faithful friend, Barry Wheeler, and in which he will meet ambiguous and mysterious characters such as the Daughter Emil Hartman or the two brothers musicians Tor and Odin from the band Old Gods of Asgard (fictional band avatar of the band Poets of The Fall, actually existing). L’ticket of the protagonist in the lake is a moment basic of the story that will also be resumed for resolution e conclusion of the work. The mirror of Cauldron Lake, a lake of ancient origin volcanic, represents so figured the entry into the realm of darkness and of the darkness and somehow the famous echoes lair of the White Rabbit. 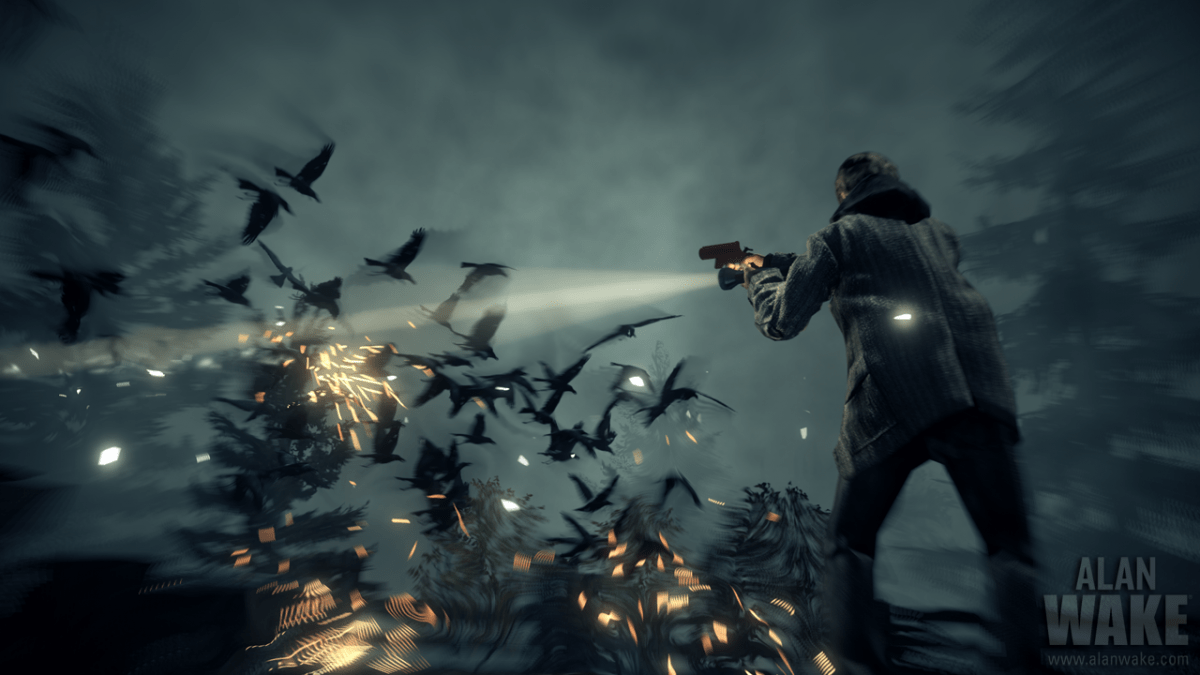 Putting the question from a perspective post-modern, which embraces a certain type of subjectivism, the darkness of the lake bottom has a meaning different depending on who enters it. There is also an interesting interpretation of the lake which sees the latter as a Altered object of the universe of Control. This is how Remedy managed to connect the two titles and, with the retroactive creation of a shared universe, to give further meaning to characters, objects and events in the world of Alan Wake.

In this case, Alan being one Writer, the Dark Presence from the features of Barbara Jagger (Baba Jaga?), Musa ispiratrice di Thomas Zane also fallen into the lake in the ’70s, it has the “role” of putting his own to the test sanity confusing his mind and guiding him to the folly. The goal of the Dark Presence, however, it is not clear immediately. What is evident though, is that it has the power to take possession of people, empty them of their self and fold them to evil. But slowly it becomes clear that to the entity supernatural not really interested in taking possession of inhabitants of Bright Falls, the entity wants Alan, wants his mind unique and special. 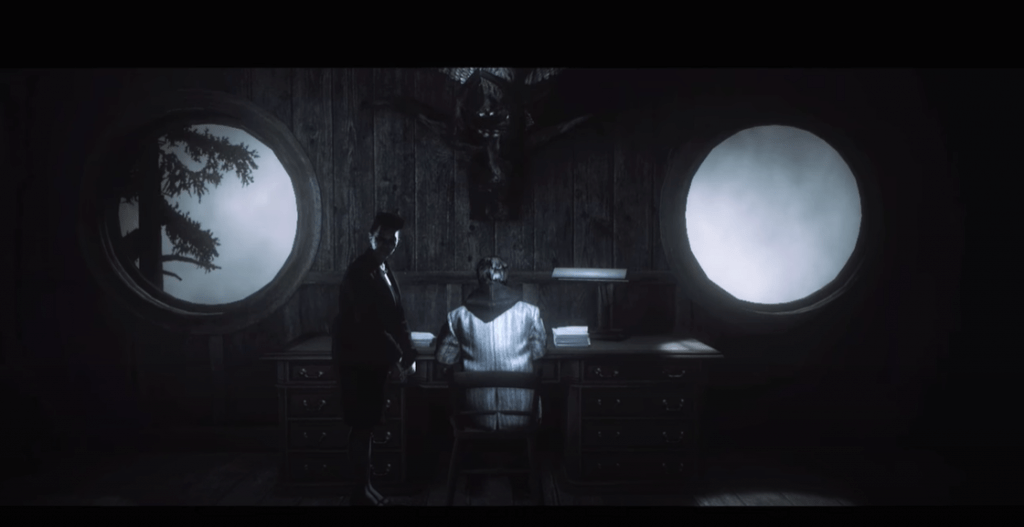 If the lake has the power to yield real the stories, by to commute the fictional stories in reality, taking possession of Alan’s mind, the darkness will use his writing skills for imagine a story in which it will dominate the whole world wrapping up not just Bright Falls, but all reality we know with a heavy veil of darkness. Speaking of topoi of the narrative, the figure of the doppelganger, here rendered through duality Alan / Mr. Scratch (which we do not explain so as not to spoil the ending), has always been central to literature starting from the end of the 19th century. From Jekyll e Hyde from Stevenson, up to White Loggia and to Black Loggia from Lynch, the theme recurs in many horror stories.

Furthermore, this breakdown can be translated immediately dichotomous according to a key psychology. Alan, in fact, has to cope not only with the lack of ideas but also with his sense of insecurity e inadequacy towards his duties social as a writer, this prevents him from finding serenity and writing something that really is original, a new best seller. Which brings Alan closer to Jack Torrence from Shining. Like Jack Torrence, Alan is also in deep crisis creative and on the verge of collapse nervous. The engine that sets the events of both stories in motion is precisely the voyage to a location of holiday immersed in nature which, in theory, should create a context of momentary breath from a chaotic everyday life and solve the “artist block“. 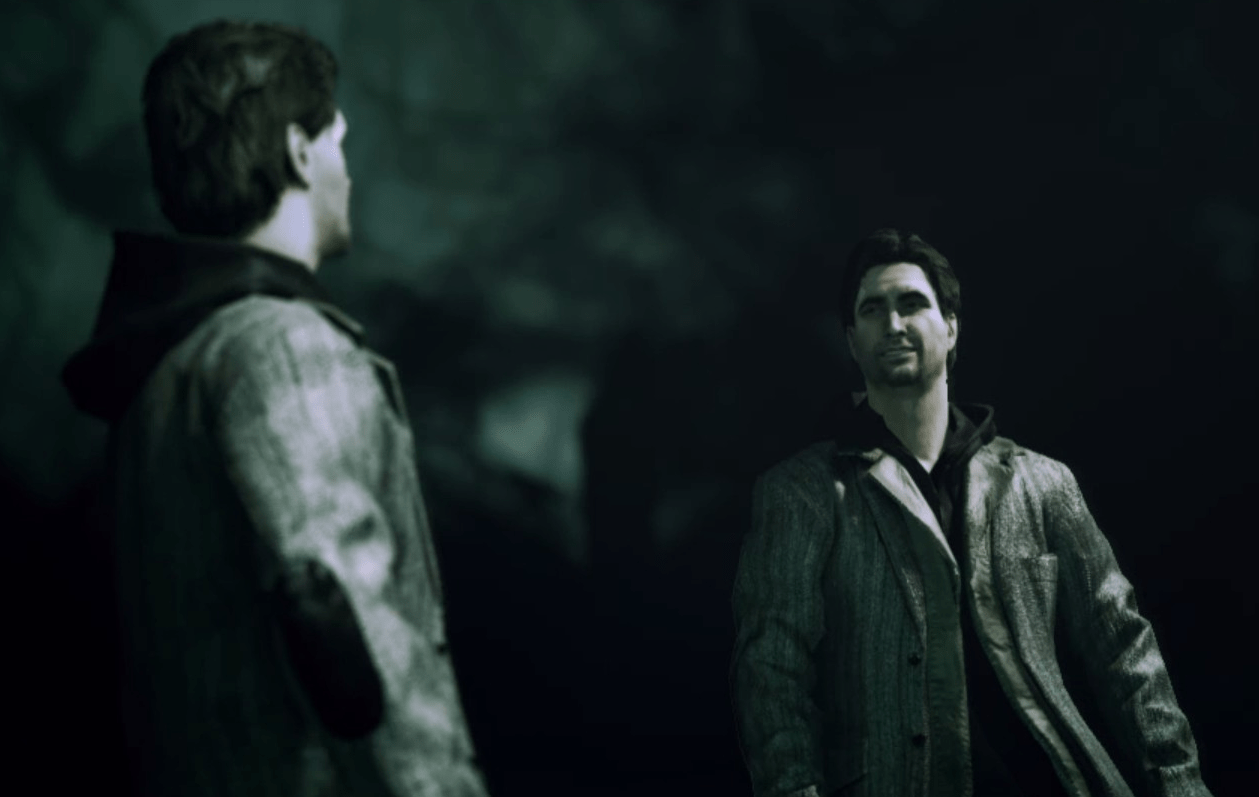 Fears and shadows of the unconscious – Alan Wake: literary references

On closer inspection, in fact, in the world ofart it is often insisted that everything has already been written and that artists cannot help but follow paths already traced by others. This feeling of distress related to the creative process is well staged in the final sequence of the game, during which the protagonist, armed with the light of the Clicker, that is the button that symbolically turns on the light of the reason, penetrates into the depths of the lake / Dark Dimension to save Alice by coping Barbara / Dark Presence once and for all. In this non-place made up of darkness and shadows, words fluctuate in the air without ever materializing and only once illuminate with the player’s flashlight they transform into theirs meaning, that is, they pass from language potential a reality tangible.

Finally, another topos that can be glimpsed in the metanarration of the title, is the revolt of the work against his Creator. Here, Alan’s creature is not a Frankenstein-like monster in flesh and blood, but rather his own novel. Which brings Wake closer to another book by Stephen King, that is to say Misery. After all, Departure it’s Alan’s new work, and what’s inside it, including the Dark Presence, is all his mind… Or isn’t it? In short, the voyage by Alan Wake is not just an immersion in paranormal with psychological and symbolic implications, but also a journey within it history of literature.

The discussion of issues related tohorror is staged here with a literary technique post-modern. The narrative follows in full i royalties of the novel of ‘900. To begin with the story is strictly divided into chapters, as well as in literary works and in television serials. The time of the story is duplicate, in fact we have the time relating to the game Alan Wake, which proceeds linearly (excluding two or three flashbacks), and the time of the meta-tale Departure, which develops in a way syncopated alternating past events that have already happened with advances of what has yet to happen. The definition of features of the character follows canons that first appeared in realist novels nineteenth century.

Alan is by no means a epic hero a la Nathan Drake, rather he is a person common in an ordinary context where things happen extraordinary. Finally, as far as the narrator is concerned, he is not a narrator onniscient external to events, but coincides with the protagonist (called internal focus for narratology). In this, the post-modernity of the story lies in the fact that the narrating voice by Alan, referring to herself through interior monologues, constitutes a kind of autoanalisi. In a one-to-one correspondence, the object coincide with the subject, The book Departure coincides with the video game Alan Wake. 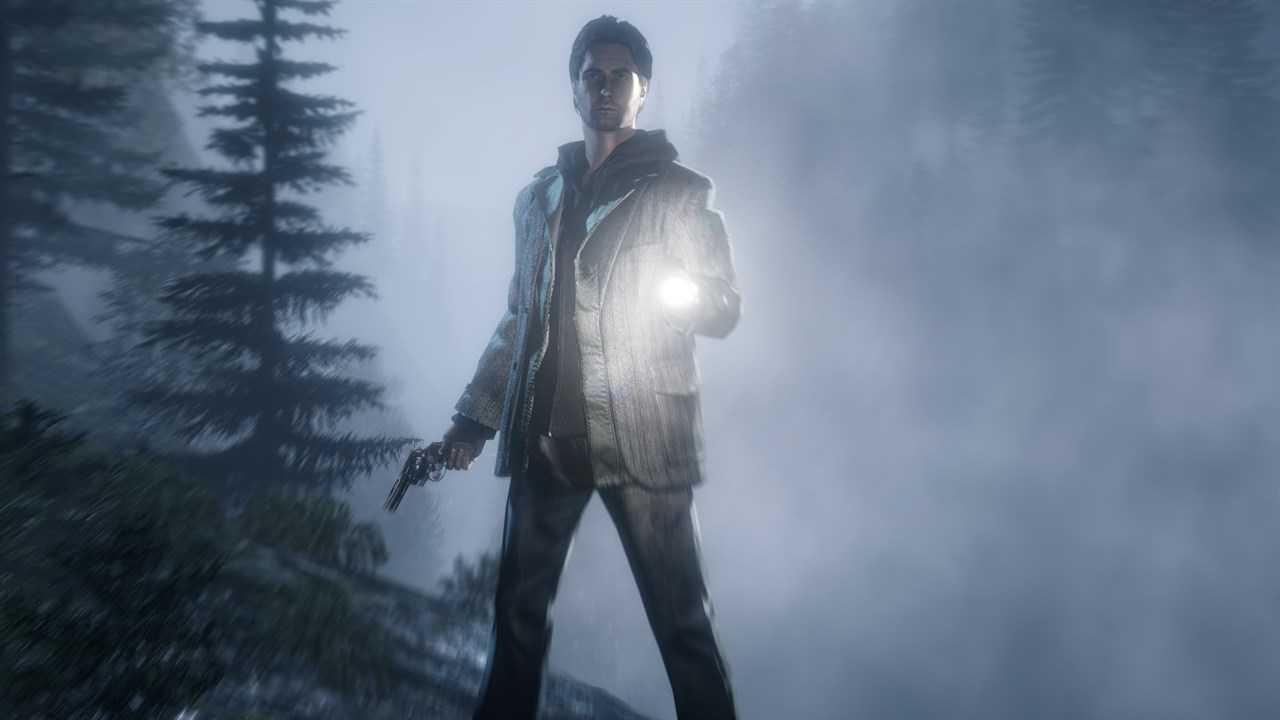 Vertigo of the paradox

I topoi, le quotes textual extras and references literary contained in Alan Wake, make it one of the titles cult of past generations videogames. At this point we can rightly assert that beauty is the poetic of the Remedy title, like others titles of the Finnish development house, they stand in the strong sense of estrangement and vertigo that the game is able to convey to the player through metanarrative sense effects. The latter build a tale of hard interpretation. As Alan predicts at the beginning of the game, quoting King, “In a horror story the victim always wonders’because‘? But there is no answer and there must not be. The unsolved mystery remains within us and is what we remember more “.

To buy securities in Discount, go to our Instant Gaming link! For more news, reviews and insights, follow the pages of TechGameWorld.com.