Does returning to Union City still have its why? Find out with our Beyond a Steel Sky review

The 90s were without a doubt the golden age of graphic adventures. Of course, the genre had had a good impact even previously, just think of textual experiences like Zork, or of the complex cross-over between writing and images of first Sierra productions. The most massive turning point, however, capable of clearing this peculiar modus playandi, occurred precisely in the decade just mentioned, thanks to the immeasurable contribution provided by LucasArts, capable of generating a third noteworthy legacy: the memory of titles such as Simon the Sorcerer, Legends of Kyrandia e Discworld, can only make a romantic tear fall on the faces of fans.

Leaving for a moment the fantasy, the pirate and everything that has to do with purple tentacles and chronographs, it is really difficult not to turn your gaze in a completely different direction which, while not giving up a pinch of irony, is characterized by themes and completely different settings.

And by doing so it is simple to immediately think about Revolution Software, and to the futuristica Union City protagonist of that unforgettable Beneath a Steel Sky, an urban agglomeration with cyberpunk features that it is possible to return to visit once again today, 25 years after its debut, thanks to Beyond a Steel Sky, official sequel to the adventures of Robert Foster also coming to consoles, which we try to tell you about in the our review.

In spite of the 5 decades that separate us from that distant 1994, in the world outlined in Beyond a Steel Sky there are only 10 years that separate the end of the previous adventure from the incipit of the new work signed again by Charles Cecil e Dave Gibbons. Once left Union City in mano a Joey, the AI ​​his inseparable friend, Robert has returned to live in serenity in the Clearing, leaving your past behind.

Destiny, however, seems to have other plans in store for him: during a fishing trip, a mysterious machine emerged from the waters kidnap little Milo, one of the inhabitants of his village, leaving the good Robert dismay. Determined not to abandon the young man, our hero will launch in pursuit of the kidnappers ending, as expected, to find himself once again at the gates of Union City.

It only takes a few minutes to realize how everything has changed compared to 10 years ago, with Joey disappeared into thin air and with a council composed of 5 different ministries to govern what seems to have become a happy utopia. Forced to assume a different identity, in order to overcome the strict surveillance system that regulates access, Robert he will soon find himself involved in a mysterious conspiracy, with the kidnapping of Milo which represents only the tip of a much more complex and cumbersome iceberg, which will lead it to shed light on the true essence of this Union City thus changed.

Supported by a series of well-written dialogues, in which humor and much more complex themes are found to coexist happily, as in the previous chapter, the story of Beyond a Steel Sky runs smoothly from start to finish, even if there are missing those twists and situations capable of making it truly memorable.

Of course, interesting moments are not uncommon, but thanks to a cast not always drawn to perfection, in addition to a slightly too condensed ending, we end up losing a pinch of that greatness that had characterized the debut of this franchise. Fortunately, despite the numerous references to the aforementioned Beneath, it is possible to enjoy the experience even if you are a novice, with veterans who, however, can only appreciate the numerous (and pleasant) references to the past. 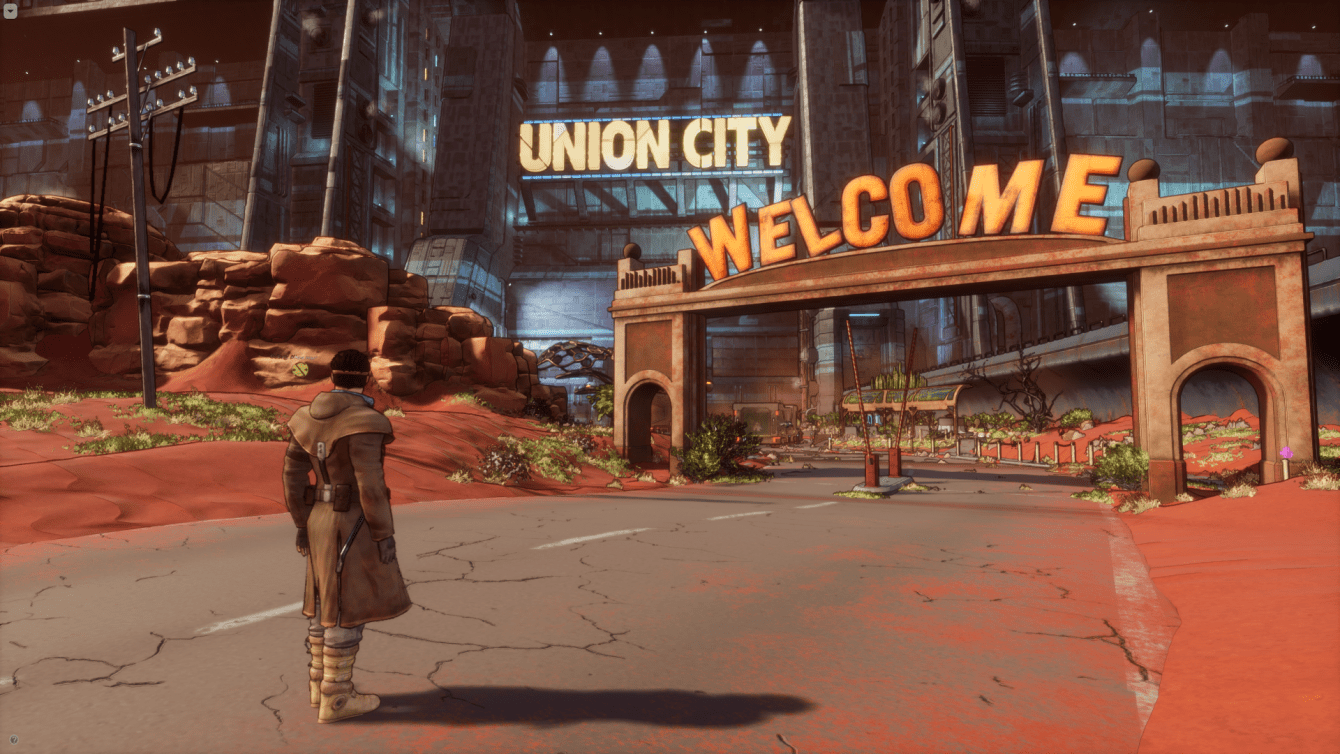 Change of perspective – Beyond a Steel Sky review

Despite being the direct sequel of a classic point and click adventure, Beyond a Steel Sky the general playful setting varies clearly and with extreme awareness, choosing to adopt a three-dimensional approach, typical of modern adventures. This choice also directly influenced the actual gameplay, which will no longer rely on the canonical massive interaction between objects and scenery, which was accompanied by constant backtracking.

Simplifying everything, Revolution has opted for a series of self-contained environments which, although connected to each other in certain circumstances, will be able from time to time to present within them all the elements useful to solve the enigmas of the case. The latter will rely very little on the interactions just described, but will often rely on observation and dialogue, as well as on a peculiar hacking device that Robert will find in the early stages of the adventure: by means of this tool, we will be able to connect to the various electronic equipment present at Union City, of which we will be able to modify their behavior by means of some flow diagrams on which we will be able to act. 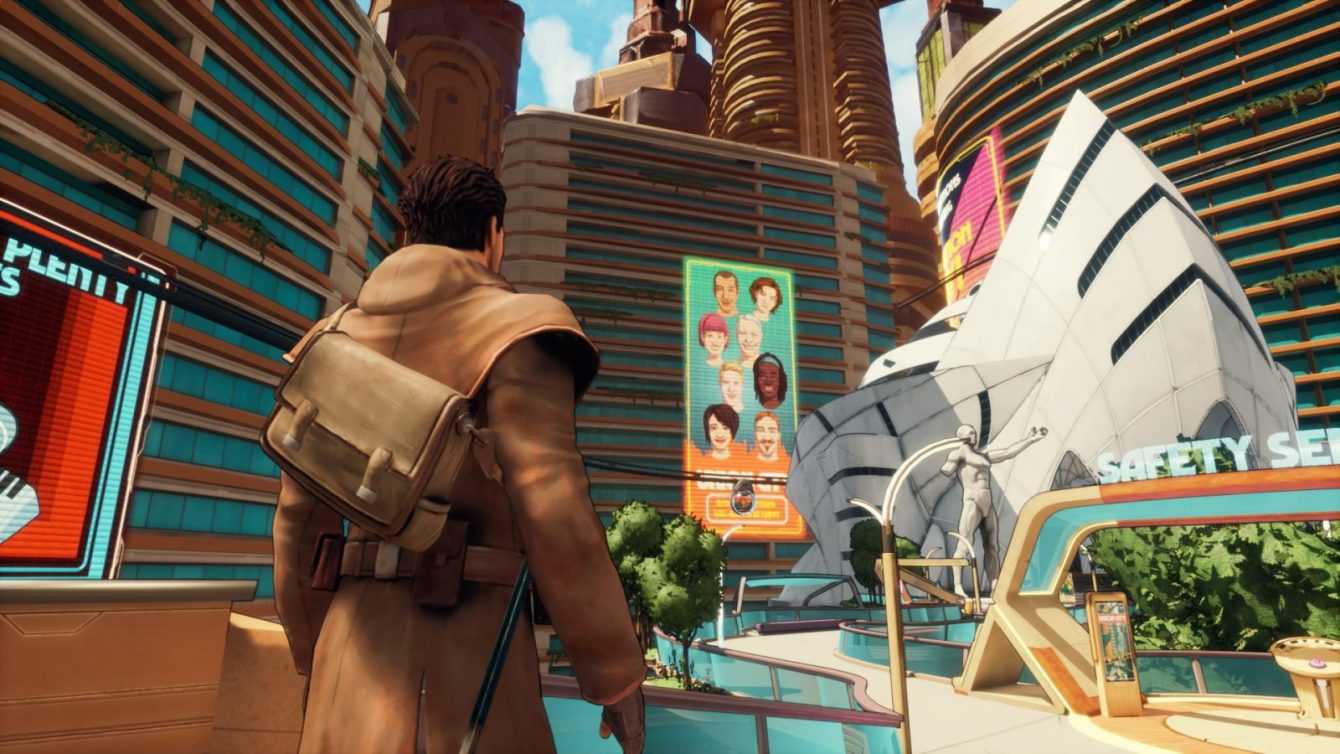 It is certainly an interesting playful expedient, capable of successfully modifying the canonical approach, and which we therefore feel obliged to promote. This set of mechanics gave birth to a never too abstruse puzzle set (except for a couple of cases), which will all be based on a decidedly coherent logic: say goodbye to those monkey wrenches (bad thing to base everything on untranslatable puns), and rediscover the universal usefulness of a trusty crowbar.

And if you find yourself in extreme difficulty, the game will still offer a series of in-game aids, which, starting from increasingly specific clues, will be able to bring anyone to the right conclusion. Precisely for this reason it is difficult to provide an effective estimate of the overall longevity, never as subjective as in this case: in our case, we can say that we have completed the adventure in just over 10 hours, without resorting to solutions, and getting stuck only in one situation, solely because we hadn’t seen an interactive element. 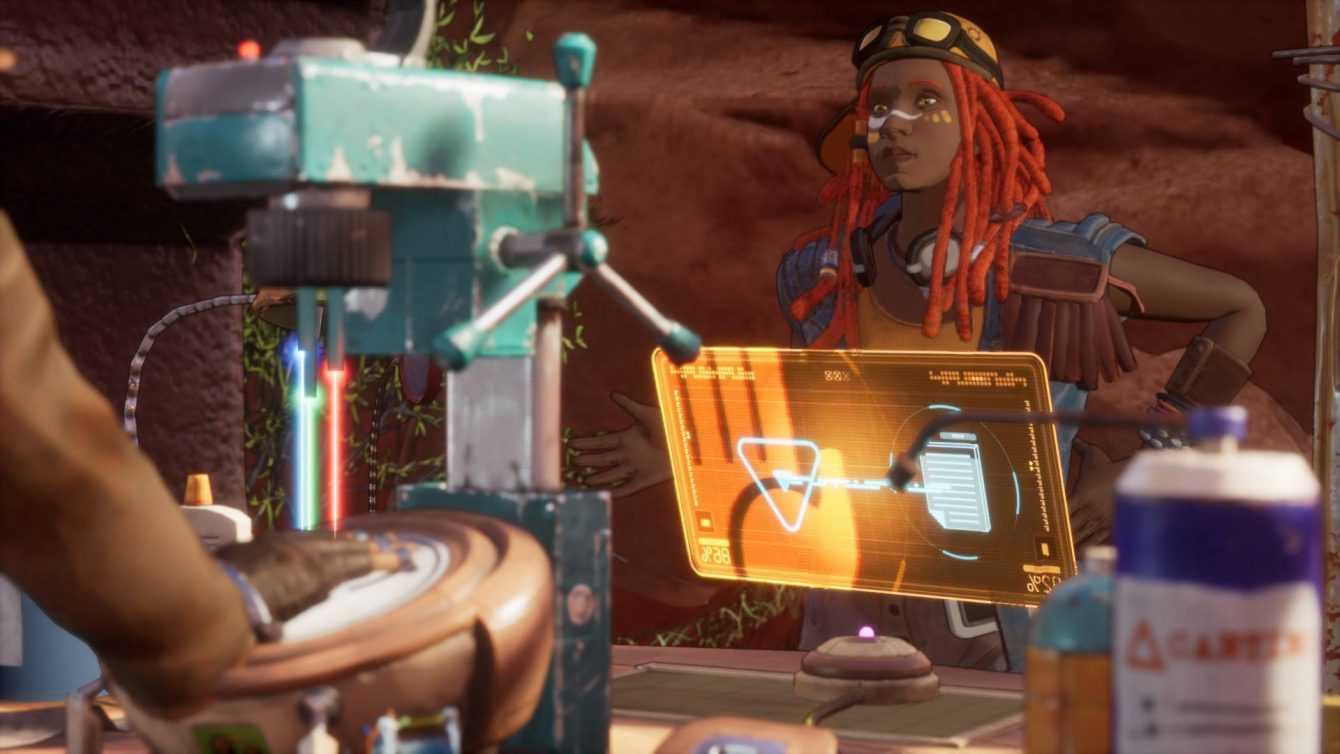 Rebuilding the Past – Beyond a Steel Sky Review

Time passes for everyone, especially in the videogame field, and thinking of finding oneself again in the presence of pixel art graphics, however excellent, would have been very out of place. Marrying a more modern approach and in step with the times, Revolution has chosen to rely on a completely three-dimensional rendering, taking advantage of theUnreal Engine and a graphic style characterized by a cel shading really nice.

All without giving up thecreative contribution of Dave Gibbons: the British cartoonist, known for Watchmen, Superman and many other superhero works, he returns once again to provide his contribution in terms of design, giving the whole a certainly peculiar look, although perhaps a little more anonymous and mainstream than the previous work. 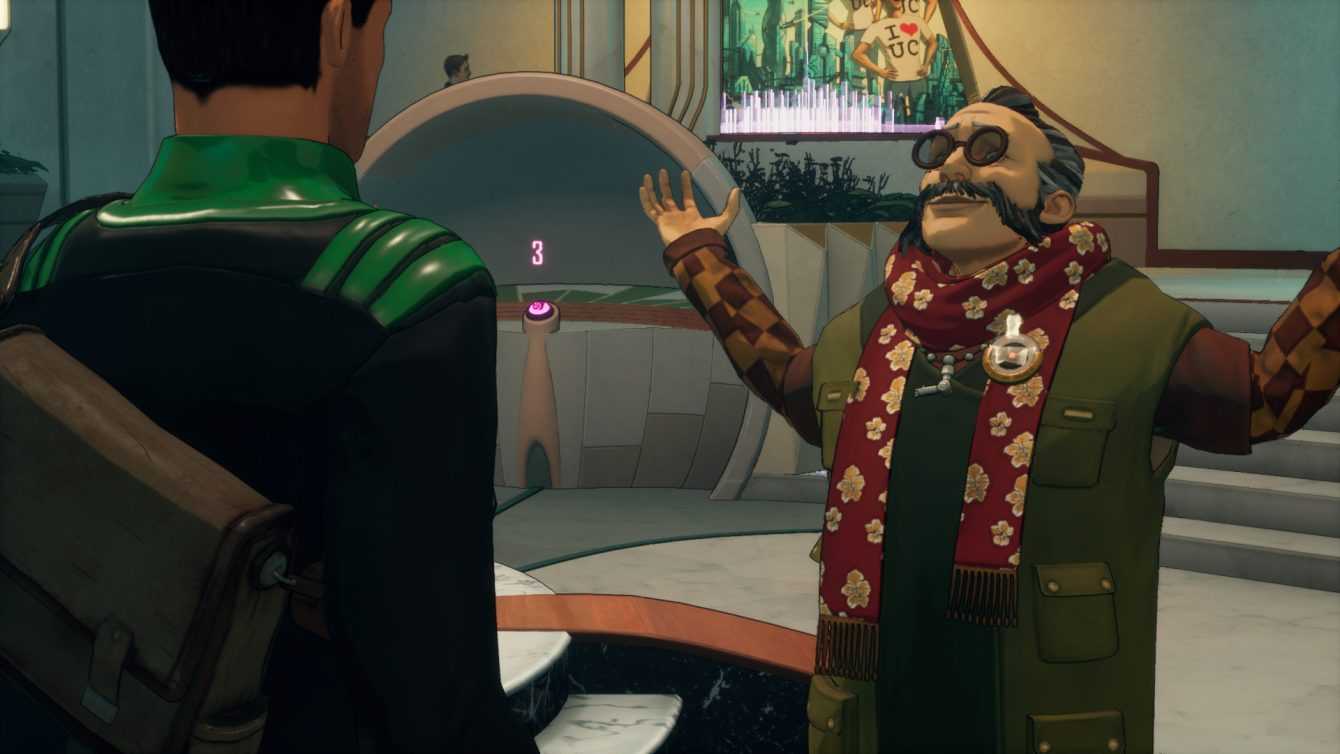 The most marked changes, however, have affected the design by Union City itself, now further away from the dark and cyberpunk atmospheres of the past, replaced by a more sunny and colorful look, in which marked art deco influences make it more similar to Columbia from Bioshock Infiniterather than a decadent futuristic metropolis.

The greater weight of the graphics sector, however, did not lead the PS4 code provided to us (tested in backward compatibility on PS5) to suffer particular shocks: the game remained fluid in all circumstances, with only some slight delay in loading the textures on the occasion of the various scenario transitions, which were accompanied by short shots in a single portion of the adventure. On the sound front we find ourselves in the presence of a very good English dubbing, supported by a good textual localization in Italian. 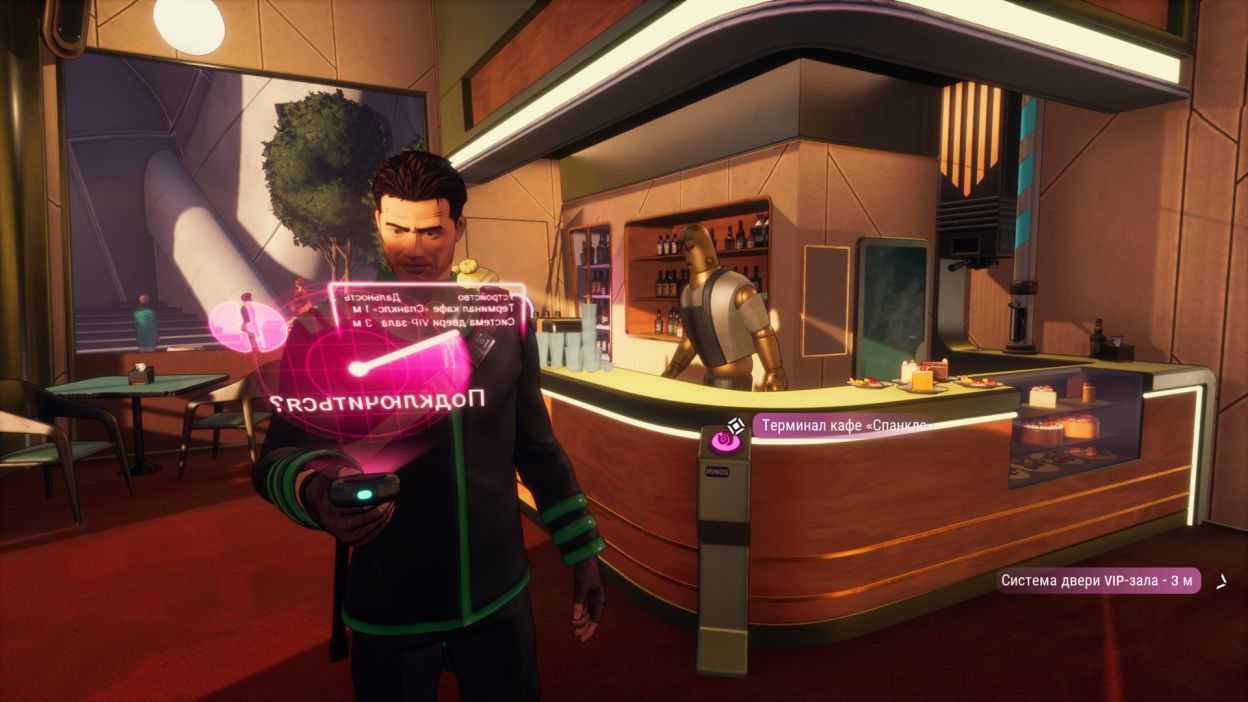 Back to Union City it was like taking a delightful dive into a distant past, but never really forgotten. Although very different from the previous work, the new title signed Revolution Software has brought back a fascinating setting, capable of indelibly marking the world of graphic adventures of the past. As successful and intriguing as it is, however, the return to the scene of Robert e Joey fails to replicate the grandeur of their debut, proposing a less complex and multifaceted adventure, even if supported by some good playful intuitions (see the hacking system).

It must be said that it was not easy to effectively re-propose a playful world so damned distant, both temporally and purely conceptual, and for this reason it is difficult to reproach the team for wanting to make everything much more accessible than previously. Even net of these small criticalities, however, the return to Union City it is configured as a more than discreet play / narrative experience which, although not able to rival the original work, manages to rework its mechanical and thematic effectiveness with courage and relative effectiveness.

This concludes our review, therefore we can not help but invite you to stay in the company of TechGameWorld.com, as well as take a look at the offers on Instant Gaming.