In this review we will talk about Big Roumble Boxing: Creed Champions the boxing video game inspired by the Rocky movie saga

The last few years have been poor in satisfactions for lovers of boxing video games. This is also because, despite its great success, the videogame world has never been particularly interested in the Creed saga. Big Roumble Boxing: Creed Champions, which we will talk about in this review, is in fact only the second attempt to make a game based on the films starring Michael B. Jordan.

The team of Survios, who had previously covered the VR game Creed: Rise to Glory, the only other title inspired by the franchise. For this new product the studio has chosen a more classic approach and drew inspiration from the classic arcade model to create a simple simulator, easy to learn but difficult to master in intentions. He therefore did not focus on realism or depth, but rather on immediacy. Let’s find out together if their attempt was successful.

Let’s start our review by looking at the sources from which Big Roumble Boxing: Creed Champions draws inspiration for its content. In addition to the aforementioned Creed films, the title also refers to the original saga in Rocky. In fact, the roster is made up of boxers from both the most recent films and historical titles. Among them we find Ivan Drago, Apollo and Adonis Creed, Ricky Conlan and of course Rocky Balboa. To complete the group there are then some original characters.

While there is no real story mode, a short story arc has been prepared for each boxer and is accessible through the Arcade mode, within which the player is called upon to face a series of encounters with increasing difficulty. In addition to this, there is also the Versus mode, which allows us to face a single match against virtual intelligence or against another player in local multiplayer. Success in both modes will unlock aesthetic content and new fighters. 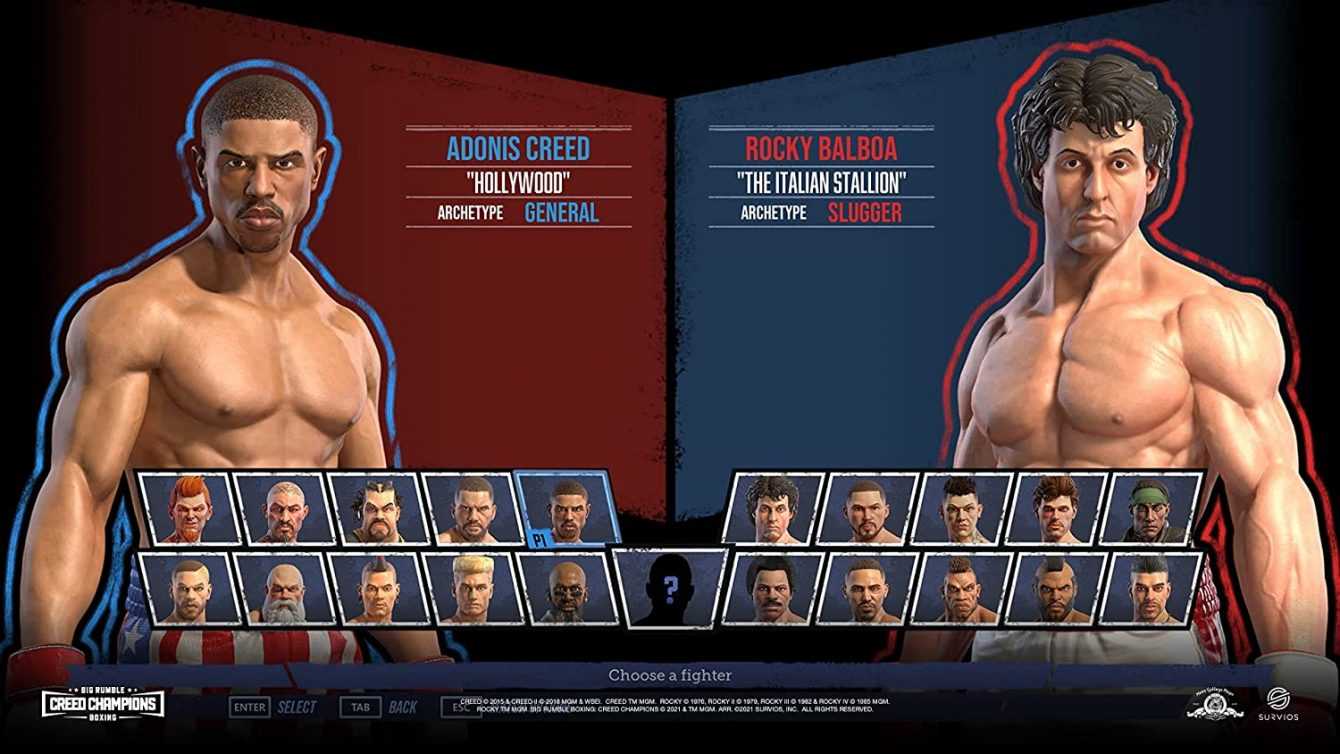 The important thing is how you can withstand blows: this is Rocky’s teaching. However, the lesson is only partially applicable to the game we are talking about, whose gameplay it tends to be biased towards the offensive. You have the ability to parry and dodge, but the attack is the most important component of the game mechanics and, in fact, it is divided into three different types of shot: light, heavy and grip. To win matches it is necessary to learn how to make combinations that contain all types.

Boxers are in turn divided into three different categories: there are the Thugs, slow but capable of inflicting a lot of damage with a single punch, the Attackers, which are by far the fastest in delivering blows, ei General, who do not excel in any aspect but are capable of doing everything. To achieve victory, the player must therefore understand the characteristics of the character he chooses, but only up to a certain point: boxers differ only in speed and power. Consequently, once you are familiar with the controls, your choice of fighter has little influence on the fight.

Talking about commands, these are all too simple and, if on the one hand they allow you to become familiar with the game in a short time, on the other they make clashes too repetitive and limit the longevity of the title. At the end of the day, what you perceive and that the game does not aim to be a boxing simulator, but an arcade-style fighting game. 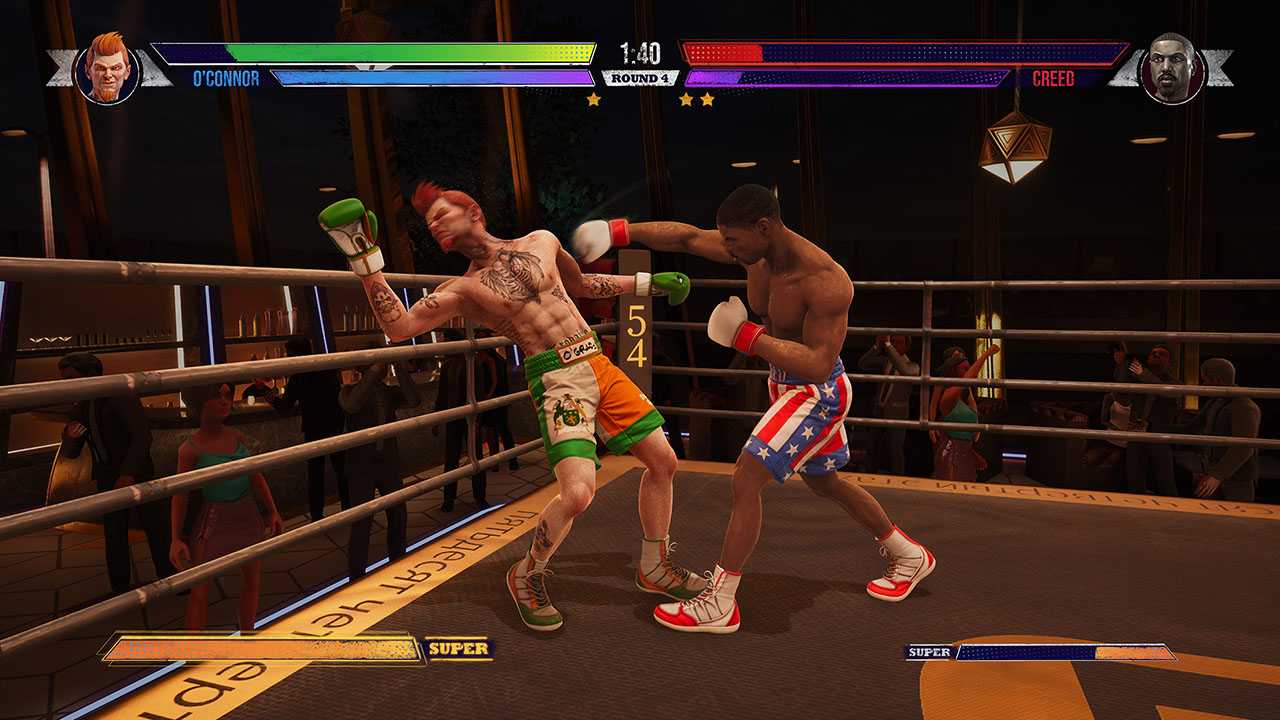 One of the aspects that we have not yet covered in this review is the graphic rendering, which is one of the strengths of Big Roumble Boxing: Creed Champions. The models of the boxers are very well made, even if the design of those not taken from the film saga is perhaps a bit too caricatured. These are not only satisfactory from an aesthetic point of view, but also as regards theanimation, which is characterized by precise and smooth movements. Similarly well done are the 13 arenas within which the meetings take place.

As for the visual aspects, the greatest criticality lies in the poverty of details. The shots, for example, leave no marks on the faces of the boxers; the cutscenes, present in the Arcade mode, are devoid of animations and inside them the boxers always wear the combat suit. Another aesthetic element that could have been managed in a better way is the soundtrack. Composed of the iconic songs of the film saga, it is always present, even during the fights, and it is not difficult to imagine how, in the long run, it can become annoying. 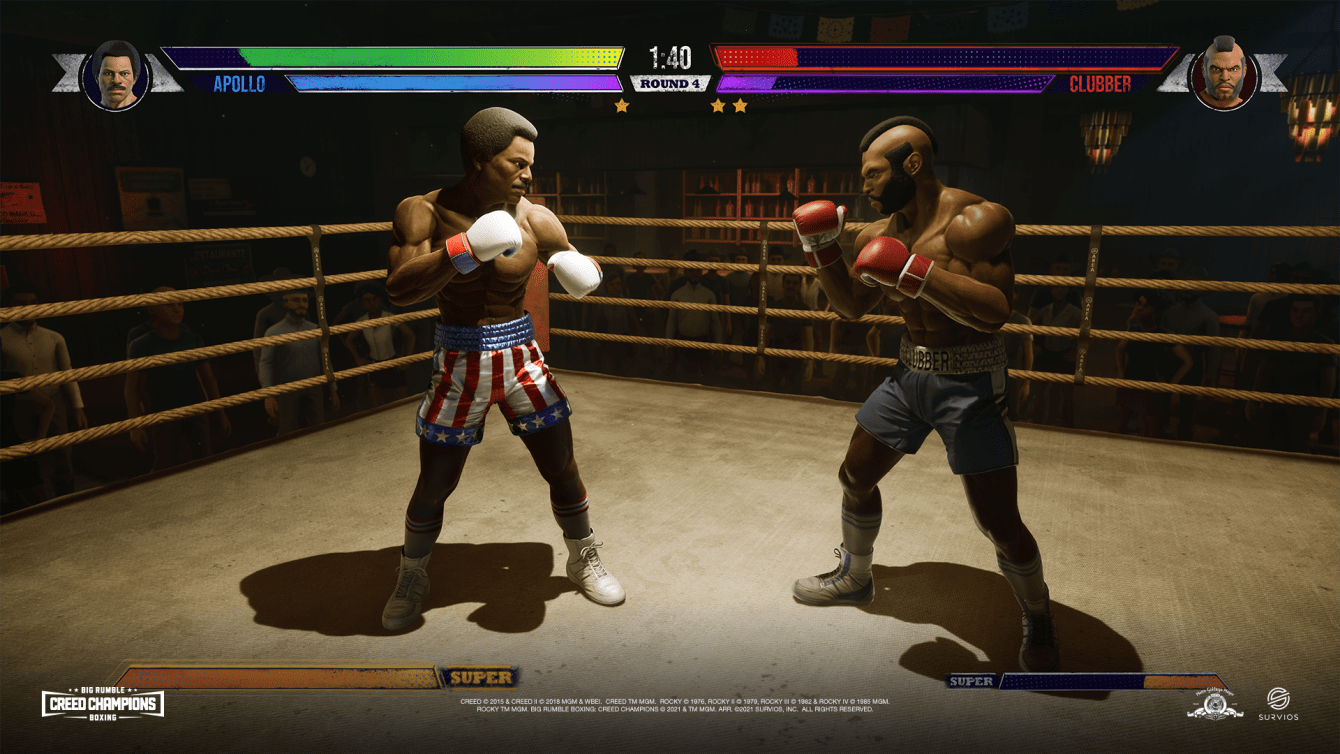 In the various parts of the review, he has repeatedly shown how Big Roumble Boxing: Creed Champions is a well made game but, at the same time, rather limited in terms of depth and longevity. However, this is not due to a mistake by the development team but rather to the fulfillment of a specific will.

The intention of the developers was to make a titolo arcade with which a casual player, perhaps attracted by the famous setting, can have fun without having to commit too much and, compared to this goal, the game has succeeded perfectly. On the other hand, the title is intended not to satisfy those looking for a boxing simulator, or a complex gaming experience.

Big Roumble Boxing: Creed Champions release date has been set for September 3rd. The game will be available for PC, PlayStation 4, Xbox One and Nintendo Switch. Continue to follow us on TechGameWorld.com to read reviews, previews and insights dedicated to the best titles of the present and of the past. To purchase this and many other games, we invite you to take a look at the vast catalog of Instant Gaming.