Bungie is undoubtedly one of the most important software houses of the modern videogame market, despite this not everyone knows its history, strong in high quality video games especially from the point of view of gameplay and the depth of the game mechanics. On the occasion of the anniversary of his trent’anni We therefore take the opportunity to talk to you about Bungie, retracing its history from its origins, with the development of Halo, up to Destiny 2, his most recent work.

Although Bungie is particularly known especially by a niche of gamers, it is undeniable that it is one of those companies that have contributed to writing the history of the medium. The software house is often associated only with its two most important franchises, that of Halo and Destiny 2, with the latter having thousands of players even years after its launch, but its history is much more than these two titles.

The beginning of Bungie’s history dates back to the early 90’s, when Alex Seropian e Jason Jones, two students at the maths faculty at the University of Chicago decide to develop a game together, publishing it through the former’s small company, then called “Bungie Software Products Corporation”. It must be said that the period was not ideal for the foundation of a new software house, not to mention that Seropian, the founder of Bungie, was only 21 years old.

The first game the developer released was Gnop! a free pong clone dedicated to Apple Macintosh computers, which was followed by Operation Desert Storm, a 2D isometric shooter that was not very lucky in terms of sales, as it only placed 2500 copies, but considering that Seropian worked on it himself before graduating, we can certainly consider it a success.

It was after this adventure that Jason Jones, a friend of Seropian’s directly from the artificial intelligence course, joined the company. The first game the two developed four-handed was Minotaur: The labyrinths of Crete, released in 1992 for the Apple Macintosh, an RPG with a working multiplayer system that managed to sell enough for the company to grow.

With Seropian at the helm of the commercial part and Jones at work on the technical sector of the games, the newborn Bungie was starting to move towards his new project, for which he also managed to involve Colin Brent, who took on the role of art designer. The new trio then began working on Pathway of Darkness, a supernatural themed shooter released in 1994 also for the Macintosh.

The game was the software house’s first real success, as it sold a more than fair number of copies and was even applauded by industry critics. Finally Bungie had a budget worthy of the name to invest in expanding the company and the first move of the developers was to rent a proper studio and hire the fourth member of the party. Doug Zartman, who became the head of public relations.

But there was no time to bask in their past success, so the team immediately started developing the Marathon, also released in ’94. In this case we are faced with a sci-fi FPS, which aimed to bring to Mac a playful experience similar to that of Doom and System Shock, two games that in that historical moment were literally depopulating.

The game was a smash hit, with record bookings shortly after its unveiling at Microsoft Expo and which justified the development of a sequel. Marathon 2: Durandal, released the following year with a focus on cooperative multiplayer, which resulted in even more sales. Bungie will end the series with Marathon Infinity in 1996, to experiment with other videogame genres.

Before arriving at Halo, in the history of Bungie there is another enterprise, the result of the company’s desire to expand its stock of titles with different videogame genres. It was from this position that it was born Myth: The Fallen Lords, the son of a sudden change of mind resulting from the launch of Quake, which prevented the company from entering the FPS sector in the arena.

Myth then took on the characteristics of a RTS in real time, where two players battled it out in a huge setting with troops of around 100 on the field. A game in some ways futuristic, which did not fail to find the favor of the public, especially thanks to its multiplayer component. Do you think this game is still running on some private servers!

Anyway, Myth; The Fallen Lords has the great merit of paving the way for the modern conception of RTS and its success allowed Bungie to open a studio branch in California, but it was not particularly fortunate in terms of the products developed. But at this point the time was ripe to make history, as the next game Bungie developed was Halo.

Halo: the shooter that made history

Halo had a singular history to say the least in the video game development landscape of that period. Initially intended for Mac platforms, the game then moved on to Microsoft, thanks to a timely acquisition of the studio by the Redmond giant, which in turn took place due to a partial Bungie’s financial crisis, forced to sell part of the company. 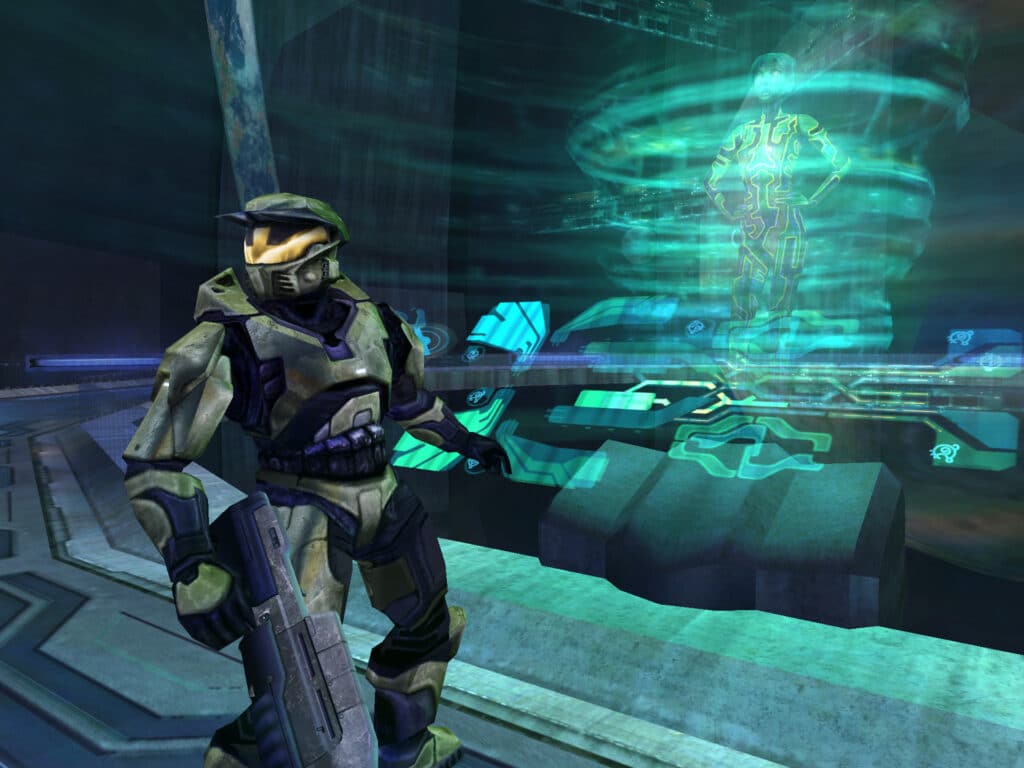 For the new game, which had already been decided some time ago, it should be called Halo, the studio opted for a first-person view, in order to increase immersion of the player, while maintaining in the process some elements related to the third person, such as driving the aircraft. One of the main challenges the team faced was adapting the controls to a gamepad, which occurred through the introduction of dynamic aim assist, based on the enemy’s hitboxes. 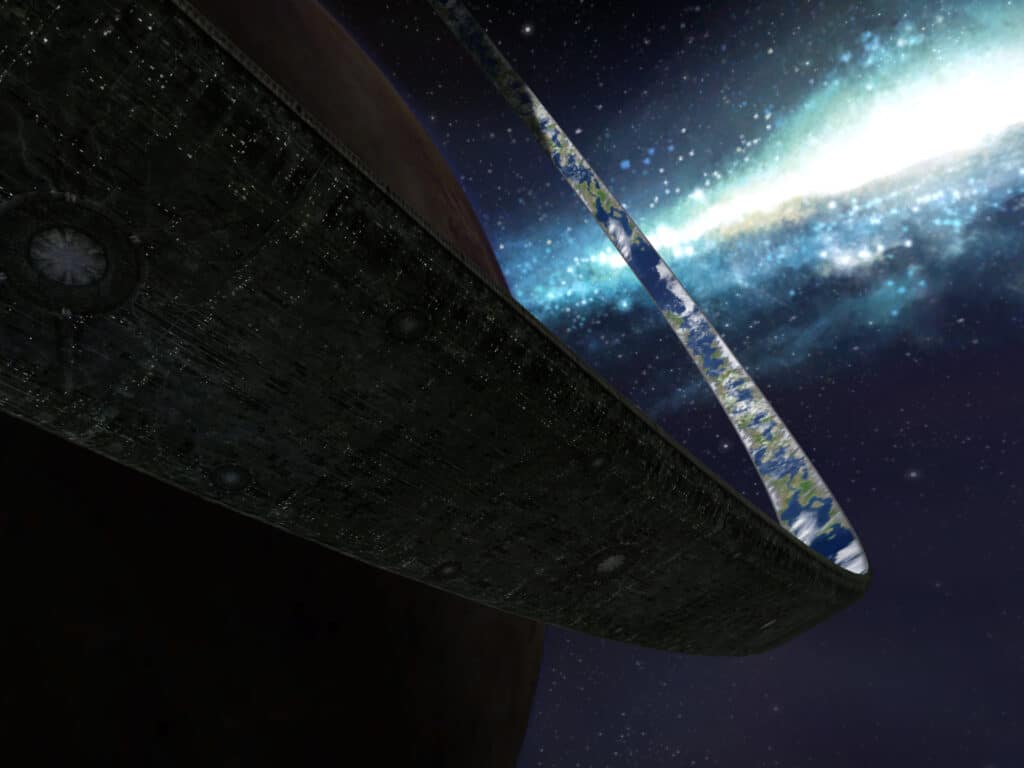 Although the game was immense, it must be considered that it was also cut in several places, due to the reduced timing given to Bungie, an element that gives a rather precise idea of ​​how ambitious the original project was. On November 15th 2001 it finally came out Halo: Combat Evolved for Xbox and the critics, initially skeptical due to the troubled development, were literally shocked by the quality of the product he had on his hands. 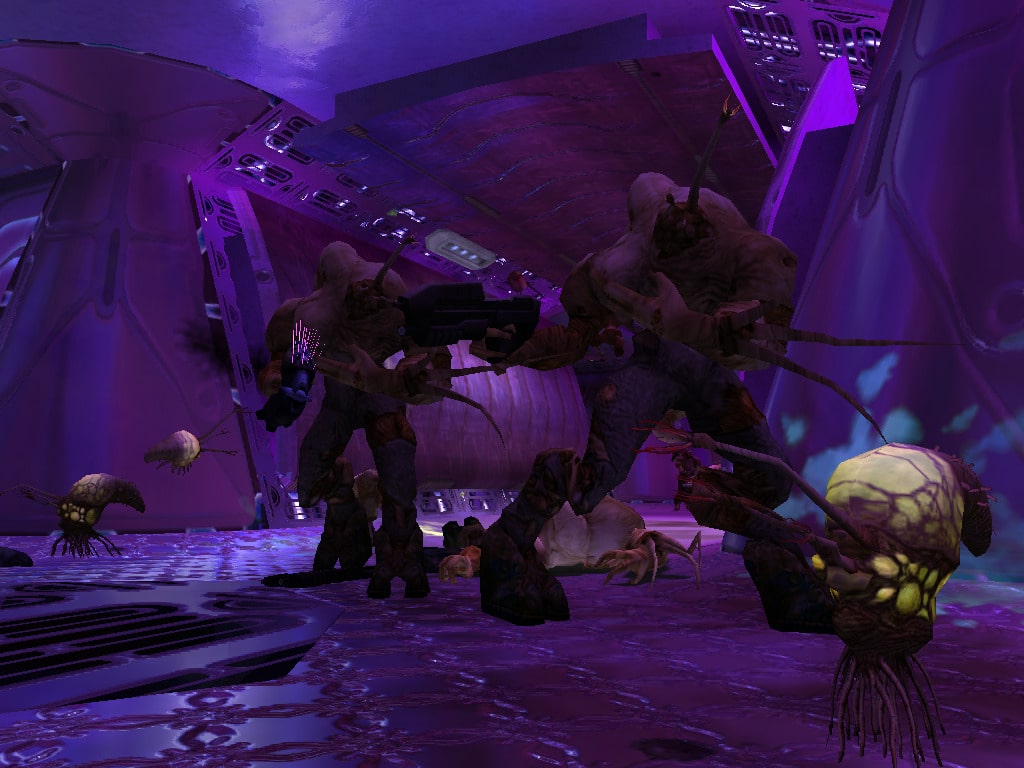 In addition to marking a turning point for home console FPS, the game helped sell an impressive one million Xbox units after just 5 months of its release, a total of 3 million copies sold in 2003, just two. years later. In short, a real killer application, also surrounded by the prequel novel Halo: The Fall of Reach from Eric S. Nylund, which ushered in the Halo-themed novel line.

Bungie produced two Halo sequels over the next several years, namely Halo 2 and Halo 3, published respectively in 2004 and 2007, both highly successful and valuable titles that were appreciated both by the public and by critics both for gameplay and for history. But the situation was starting to get tight to the company, which decided to return independent starting from October 1, 2007, without however cutting ties with Microsoft, with which it continued to collaborate for a long time.

It is precisely in this historical moment that 343 Industries takes charge of the Halo series, as Bungie began to detach itself more and more from the series. Bungie had more than 150 employees by then, and Jones was eager to make a clean sweep, working on something completely new. Meanwhile, his colleague Seropian was taking a break from work, exhausted from developing Halo. 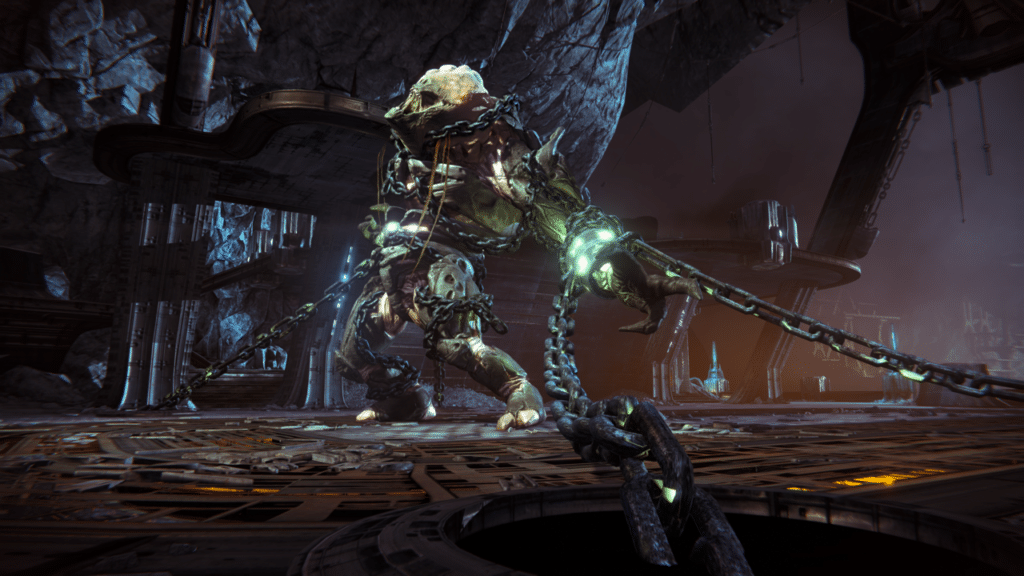 The software house signed a contract with Activision Blizzard and began development of what would become Destiny, better known as the $ 500,000 game. What Jones wanted to create with Destiny was a video game whose core was the gameplay, capable of giving players thousands of hours of content without forgetting an important narrative component. Basically the Halo formula on steroids.

Joseph Staten, Director of Cinematics for Destiny believed that players should be free to go anywhere at any time, so he decided to rework the game’s story to ensure freedom of approach shortly before the official launch, which then took place in 2014.

Destiny: the new era of Bungie

Joseph Staten was one of the cornerstones during the development of Destiny, since it was he who shaped the shape of the universe proposed in this title, before leaving the software house before the official launch. The idea is that the solar system we are going to explore in the game was a living environment and that it changes along with the player from expansion to expansion, and that’s actually what happened next in the full game. 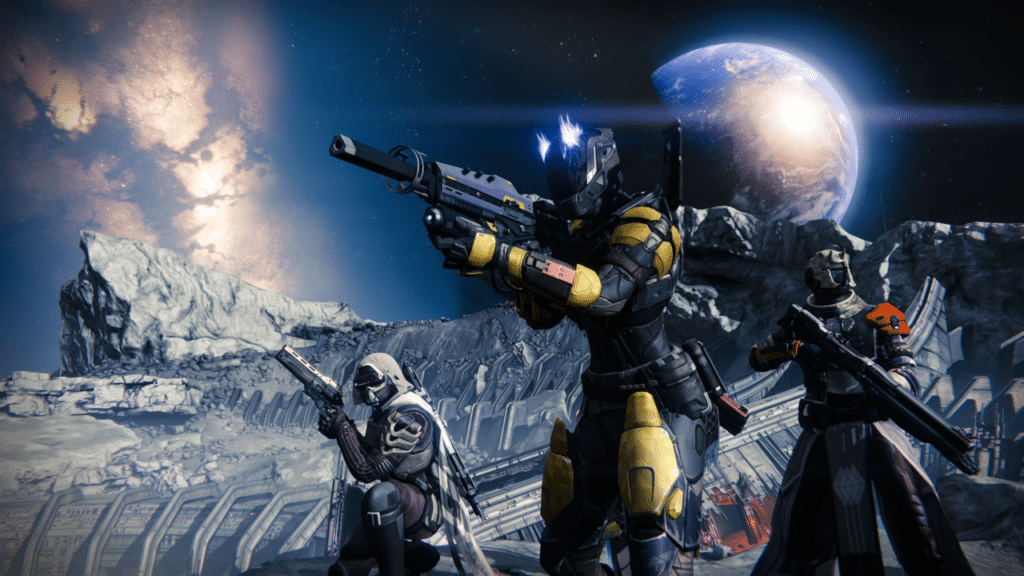 Destiny was released on 9 September 2014 on Playstation 3, Xbox 360, Playstation 4 and Xbox One and at launch it totaled the beauty of 11 million active players throughout the first week. This time the playful formula was that of multiplayer looter shooter, and in this Destiny it was surgical in keeping the attention of the players high, from the first until the last expansion.

The new Bungie game, in a sense, respected Staten’s will, managing not only to expand over time, but also to evolve its formula in new ways. Early expansions, such as the‘Darkness from the Deep and the House of Wolves in fact they have smoothed the edges of the gaming experience, while with the King of the Taken Bungie has managed to reach new heights in terms of game design. 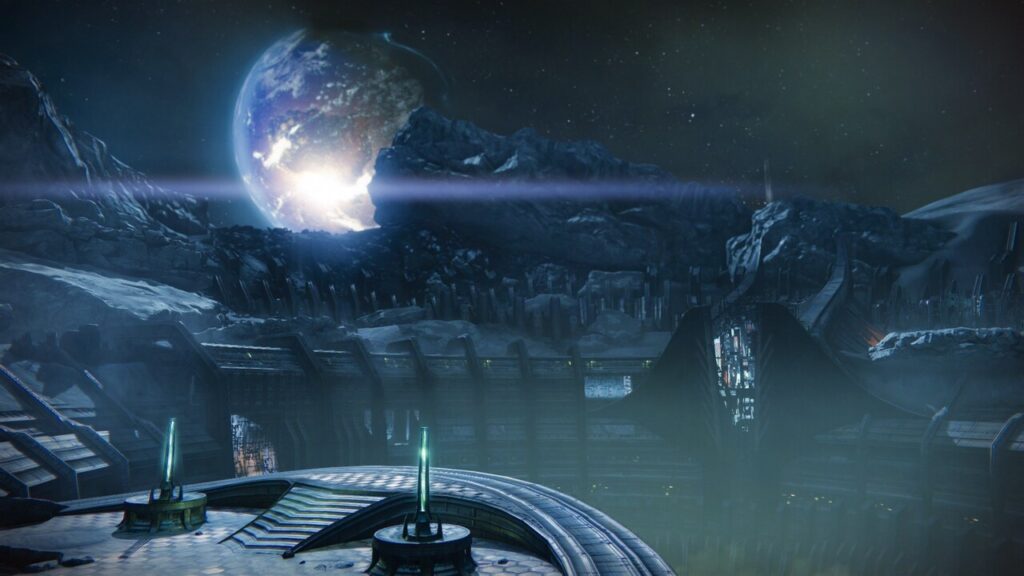 Not to mention all the activities that were entered before Iron Lords, the conclusion of the first chapter of the series. Particularly noteworthy are the races with the Goshawks, which have introduced a fun minigame into the game in which we have spent more hours than we are willing to admit.

Destiny 2 is the latest Bungie effort

When Bungie started developing Destiny 2 we are sure that he did not expect to go to one of the most troubled jobs that the company had ever faced, also due to the split with Activision Blizzard. Despite this, the sequel was released on September 6, 2017 for Playstation 4 and Xbox One, and on PC on October 24, 2017, also thanks to a new writer. Christopher Schlerf, who had previously worked on Halo 4 and Mass Effect: Andromeda. 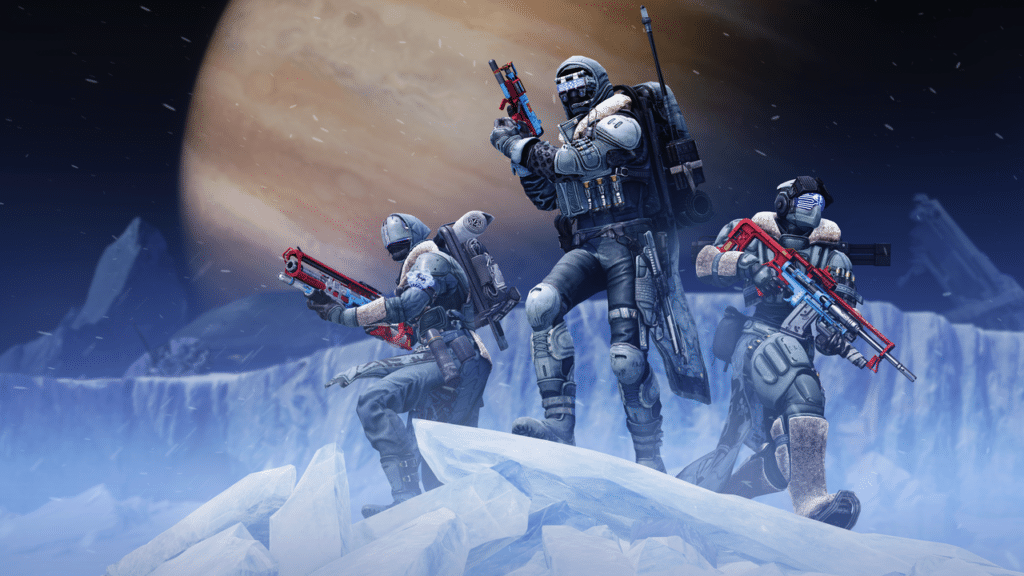 The narrative opening was …