In this review we are going to discover Castle Flipper, the game in which you can build and customize your castle as you like

If your passion is to become a carpenter, building and repairing everything around you, then this game is for you. Set in a medieval context, in the game you will play the role of a skilled handyman who will find himself having to build houses, repair any type of object and construction, but not only. So let’s start this one Castle Flipper review and find out how the title performed in our hands.

Developed by Pyramid Games, this title will catapult us into a bygone era, the Middle Ages precisely, where we will have to carry out various tasks as a carpenter. However the title looks like a sandbox and, although there are already pre-established tasks to be performed, like any self-respecting video game of this genre, our work will be free from any story. But let’s take a small step back and go in order.

In the title we will therefore be new carpenters, ready to repair anything. The game indeed will test us with various tasks ranging from simple cleaning to the construction of luxurious homes, passing through the destruction of some unnecessary objects. In short, wide possibilities from this point of view. During our adventure we will find ourselves inundated with missions of this kind, which will allow us to earn money and commodities.

These will then be indispensable to progress in the game. With the first it will in fact be possible purchase and unlock various ornaments, while with the latter we can build our house or our castle. But we will return to these points later in this Castle Flipper review.

Simplicity reigns in the title. So do not expect a simulator that is 100% faithful to what reality is. You don’t have to repair a house brick by brick or board by board. The actions performed by the character are the most basic that can exist. Just click a button and you will be able to build a wall – or any other object – or fill it with boards as if nothing had happened.

The destruction of objects, such as entire walls or ceilings, will also be instantaneous. In a couple of clicks, you will have replaced a badly arranged ceiling or any other construction. However, precisely this slenderness allows you to live a ‘simple and not at all tiring experience. In conclusion, a good game to relax and, why not, build your own “ideal home”.

The simplicity of the gameplay is perfectly reflected in the menus that characterize the game, such as the one dedicated to construction. In fact, here the objects will be rigidly cataloged, allowing the user to easily find what he is looking for, whether it is a door or a simple plant. The tool wheel is also well organized, though it is not enough just to highlight the desired object to use it, but you will have to click on it. For those accustomed to games with the weapon wheel, see for example GTA V O Days Gone, this developer choice could make the game seem even slower than it should.

One of the most important features and which probably distinguishes the title from others is the possibility of being able to rent the houses built. In fact, as you progress it will be possible to activate this option to earn extra money. Thanks to these we can expand our territory. This will allow us to build an even larger and more majestic home, or to build other houses to rent later. So you can use your land not only for your home, but also to build a small settlement. 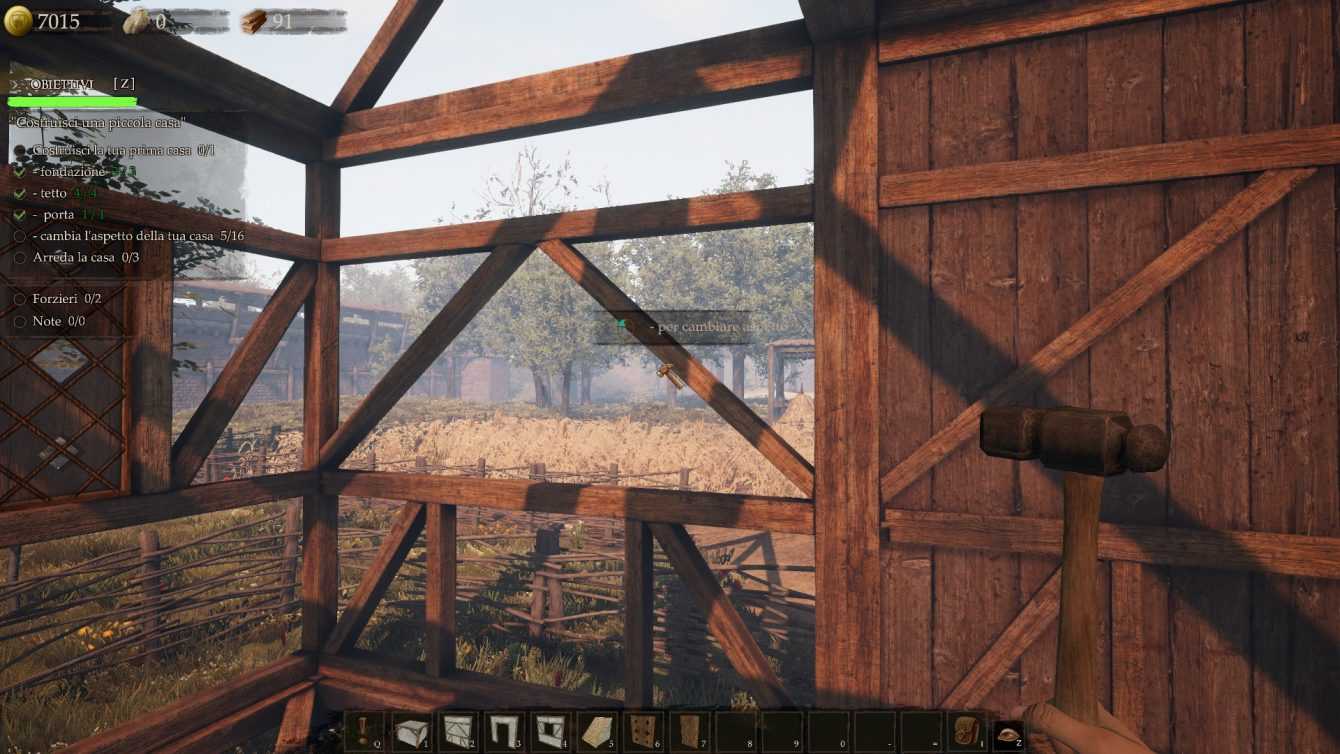 Initially, of course, you won’t have everything available. In fact, many furnishing items can only be unlocked later and only through the special dedicated shop, called Officina. The choice will be really wide, so as to ensure a high degree of customization. All this will also be reflected in the actions that can be performed in the game. As you proceed, in fact, other tasks will also be unlockable, such as repairing objects such as chairs or tables.

However, this progression is not too slow. In fact, after just half an hour of playing – the time obviously varies depending on your style of play – you will be able to unlock almost all the functions present in Castle Flipper. But what does the style of play have to do with the speed of progression? This question is legitimate, especially since we haven’t explained a game mechanic to you.

The gameplay is indeed based on an “open world” area when we build our house or our village. However, the various commissions will be carried out in well-defined and limited areas, which can only be accessed by uploading. These will therefore be comparable to dungeons, from which it will be possible to exit whenever you want. In these areas we will have to carry out specific tasks according to what the mission requires. However, to complete the various levels it will be enough to complete only a certain number of them, without having to complete them all.

Furthermore, in the most remote points of the areas it is almost always possible to find chests. These will contain gold that will add to the one obtained as a reward for the mission carried out. Finding these chests then you can grow your capital quickly, unlocking the various furnishing items even more quickly. 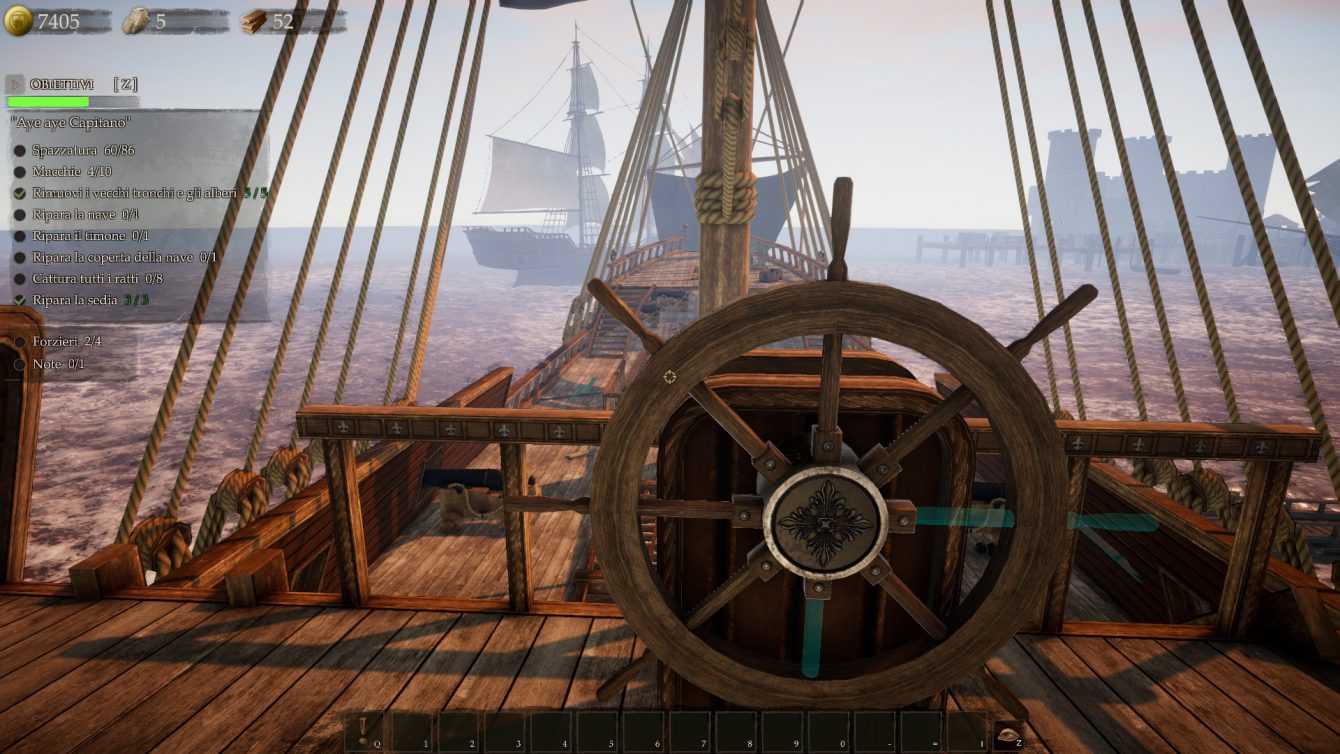 We are now nearing the end of this Castle Flipper review and it is therefore time to take stock. The title itself it brings no innovation to the genre, although some elements and the setting certainly present it in an original way. It is a “Pastime title” if so we can define it. In fact, Castle Flipper is great to be played when you just want to relax, without having to cope with frenetic rhythms.

The simplicity of some functions is very useful from this point of view, allowing the player to build any building without spending too much time. However, just this simplicity sometimes turns out to be a bit excessive, making many of the actions truly trivial. Just think of the destruction of an object that requires a single hit to complete, or the construction or filling of a wall itself.

This simplicity then collides with the “stain cleaning” action it is too cumbersome – while being extremely simple – than the rest. Even the felling of trees leaves something to be desired, with ax strokes that must be concentrated on a very specific point but with a rather inaccurate animation of the cut. In short, a good pastime to a recommended price of € 15.99 on Steam, with graphics that are not bad at all, but which are a bit banal and contradictory for some mechanics.

We are now at the end of this Castle Flipper review. If you want some discounted games, you can check the official page of Instant Gaming. To not miss further news from the videogame world, keep following the pages of techgameworld.com!