In this review we will tell you about Cris Tales, the new independent RPG that stands out for its illustrative graphics and time travel-based gameplay

In recent years there has been an important phenomenon within the videogame world: on some occasions, games have been able to establish themselves as artistic products. This is especially true in the world of independent productions which, being less influenced by economic necessity, have been able to spot in marriage his own artistic identity between figurative art and playability.

The protagonist of our review, Crystals, is a title that aims to be included among the significant ones on an artistic level. Not surprisingly, it is developed in collaboration by Dreams Uncorporated and SYCK, two realities of the indie scene. The two teams have chosen to bet on one strong graphic identity and on the development of a original gameplay, which aims to use the expedient of time travel in an innovative way. Let’s find out together if the experiment was successful.

Know the present, explore the past and change the future

Looking at it superficially, the story narrated by the game appears rather obvious. There hero Crisbell is a young orphan who has never met her parents; one day, while she is working on the garden of her orphanage, she is approached by a talking frog named Matias, who reveals her nature as a time wizard. To learn how to use her powers, which allow him to see the past and the future, the girl agrees to go on a long journey with the amphibian.

Their research will lead them to discover that a terrible plan is in place and that the future of the world hangs in the balance. Being a time sorceress, our protagonist will feel the duty to intervene to ensure everyone has the best possible tomorrow. To complete this difficult mission, Crisbell can count on the help of other characters, like experienced time wizard Willhelm and young Christopher, who will join her along the way.

As we have said, at first glance everything appears to have already been seen. To make the plot more engaging there is the good characterization of the characters, whose respective personalities appear sufficiently multifaceted. Furthermore, as we will better specify in the gameplay section of the review, the story of Cris Tales is embellished by the non-linear narrative of the game, which allows us to seamlessly explore the past and future of places we visit. 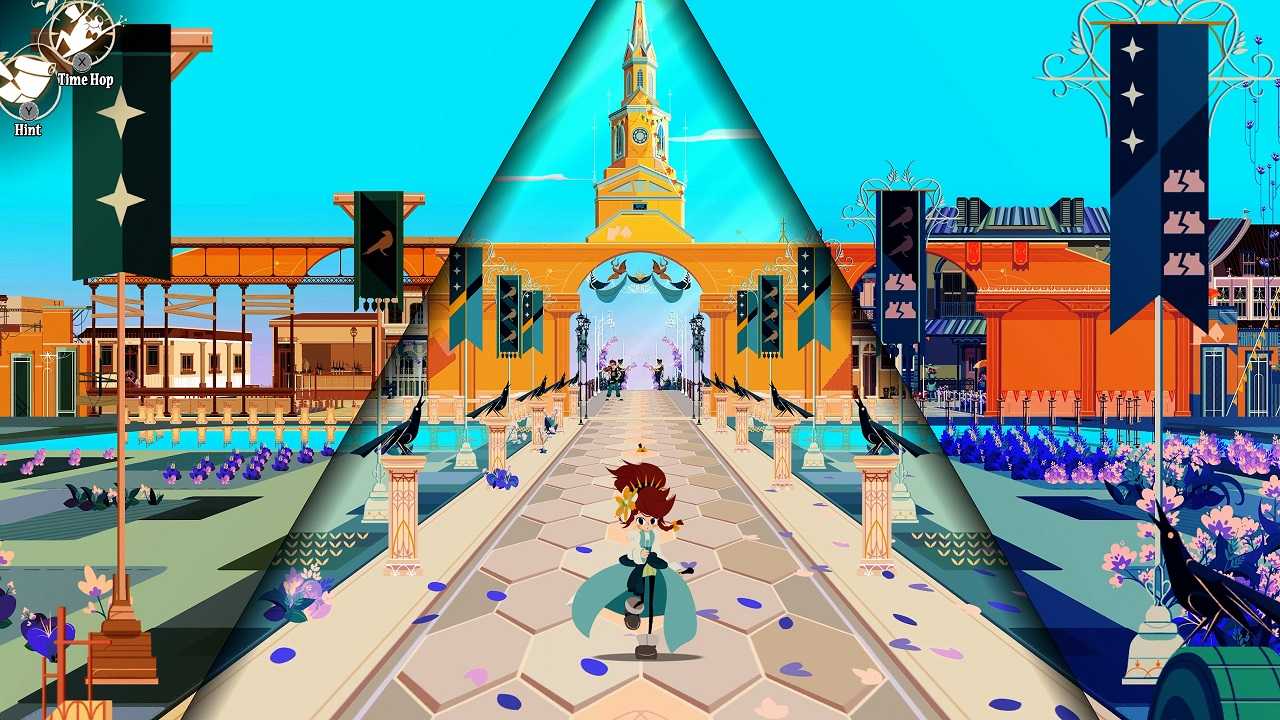 The gameplay is definitely the aspect that more than any other characterizes Cris Tales. The references of the developers are certainly the classic JRPG, like Final Fantasy and Dragon Quest. This is particularly evident in the fighting, which are in fact divided into shifts. Inside, however, there is also some real-time action: to make an attack more effective, or to parry that of an enemy, you must be able to perform actions at a specific moment. In addition, it is possible to use combo skills, which see two of the protagonists join forces to unleash a devastating attack.

The most original aspect of the title is, however, the basis of his exploration system: thanks to the power of Crisbell, when we visit the environments of the game we have the opportunity to see the past, the present and the future at the same time. Basically, the game screen is divided into three sections, with the central one dedicated to today and the other two showing the other moments. This is not a purely aesthetic expedient: the situation in the three temporal moments must be taken into account every time we are called to make a choice. Observing the past can suggest which path to take, while looking at the future immediately shows us how our actions have influenced those around us.

It is right to point out that each of the decisions that is made has an impact on the story, which is characterized by the presence of multiple endings. In some cases, as has been said, we will be able to see immediately if our actions have led to the result we hoped for, in others, however, their result will be decidedly cryptic and we must wait some time to understand all the repercussions. Finally, to make our every choice even more definitive, there is the small number of save slots, which the player will have to overwrite often in order not to lose the progress obtained.

It is not difficult to understand how this mechanism performs exciting even the smallest plot steps. In fact, it gives the feeling of really having the possibility to influence to improve the destiny of those we meet along our path. By directly connecting the player with the outcome of his actions, the game also conveys a great sense of responsibility, which makes every success extremely satisfying and every failure truly painful. 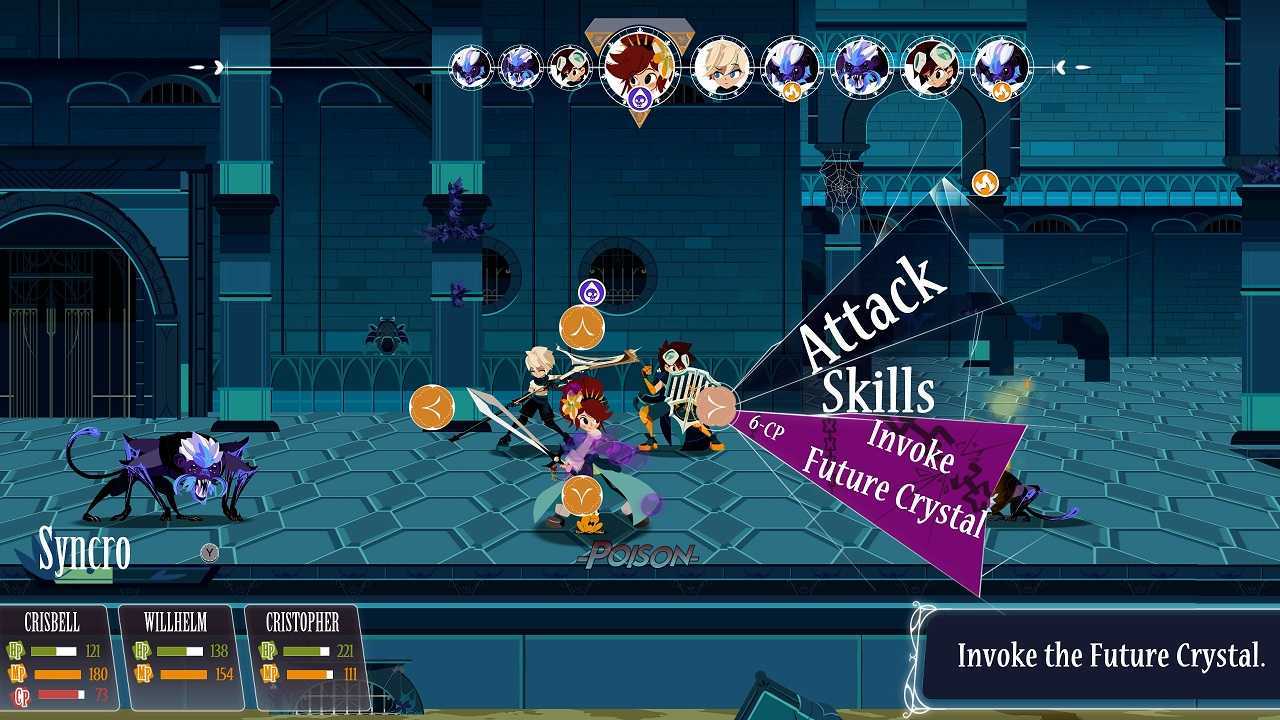 In the previous paragraph of the review, we stated that the most distinctive aspect of Cris Tales is the gameplay. While this is not a false statement, it risks undermining the contribution that it does graphic style chosen by the creative team contributes to the title. First of all, it is necessary to point out its originality: despite using the now abused formula of 2.5D (two-dimensional models within three-dimensional environments) stands out thanks to the style minimal, more illustrative than cartoonish.

Aesthetics gives a sense of artistry to the project and, in its simplicity, it contributes to making the exploration of the environments pleasant. The work done is also remarkable due to the fact that many of the most detailed scenarios are dynamic. In fact, we have the opportunity to see them in three different historical moments and, following our action, to witness their further mutation.

The same applies to the design of the personages which, even if they are made with the same style of minimal design, are made according to the stylistic features of Japanese cardboard. Their appearance is significant because, in most cases, it is indicative of their character. Consequently, seeing how this changes with the passage of time allows us to get an idea of ​​their history and shows us the impact our passage has had on their lives. 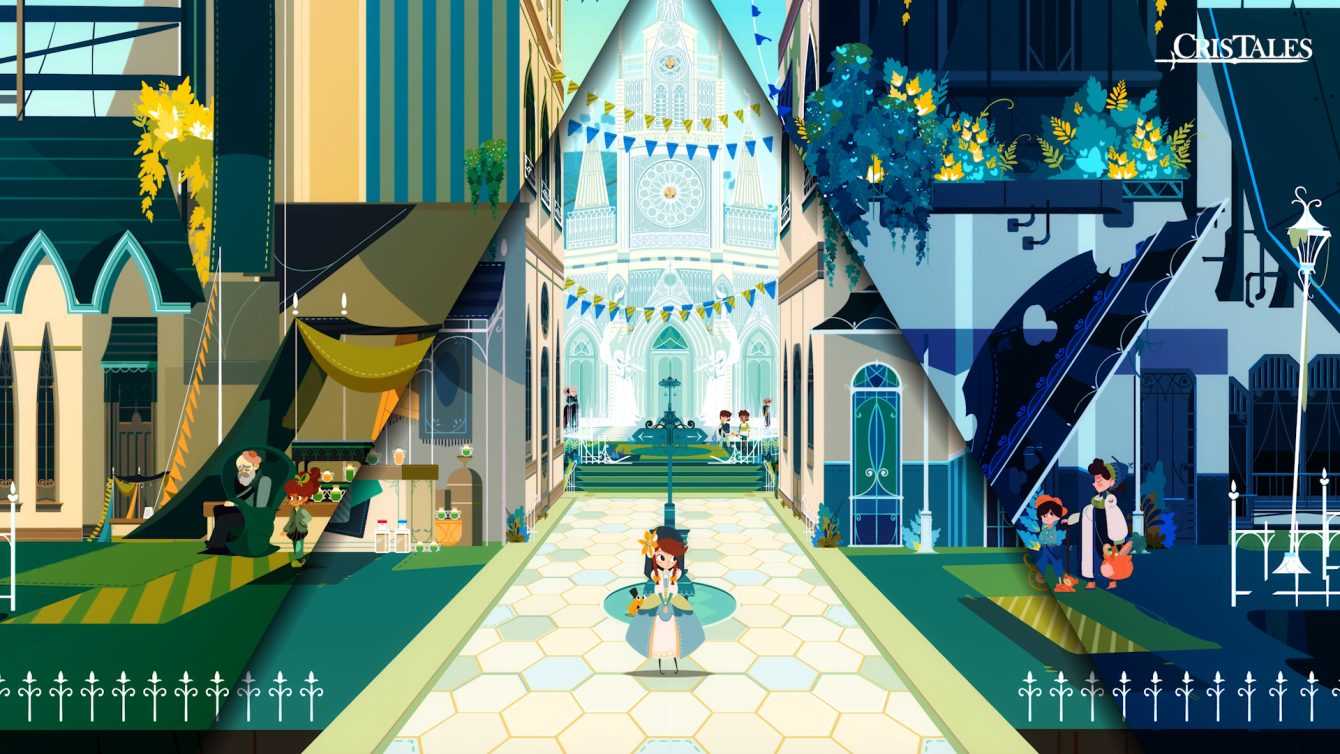 At the beginning of this review, we mentioned the artistic ambitions by Cris Tales. After having analyzed in detail its main characteristics, we feel we can say that this has been fully satisfied. This is not because the style of play or the graphics are sufficient in themselves, but because their combination contributes to the creation of a videogame experience that does not leave indifferent.

The particular aesthetic rises thanks to the dynamicity that the gameplay gives it with its simultaneous look at three different moments of time. At the same time, it is the beauty of the graphic style that renders fascinating the gaming experience. To give artistic value to a video game, as mentioned above, is theintegration of the characteristics of the other illustrative and narrative within the playability mechanisms. In doing just that, Cris Tales not only acquires a personal artistic identity, but also ensures the player a quality play experience.

Cris Tales was released last Tuesday, July 20; is available for PC, PlayStation 4, PlayStation 5, Xbox One and Nintendo Switch. Keep following us on TechGameWorld.com for reviews, previews and insights on the best video games of the past and present. If you are interested in buying this or another title, you can do so using the Instant Gaming portal.