DDR5 RAM will be the absolute protagonists of 2022 and will bring a breath of fresh air to the hardware world. Crucial and Asgard have already set in motion to produce their DDR5 RAM

With the arrival of Intel Alder Lake and the next generation of Zen processors, they will also arrive the new DDR5 RAM that promise truly remarkable performance. The DDR5 standard has been defined by the JEDEC organization for quite some time to allow manufacturers to develop new products that aim for high performance in conjunction with lower power consumption. The new modules will also be designed to be used in contexts with a lot of processors. DDR5 RAMs in full development will come ardouble the data transfer performance of DDR4 up to 6.4 Gbps. Although the first modules will probably not exceed 4.8 Gbps which against the maximum 3.2 Gbps of DDR4 are already a big advantage.

The capacity also improves, bringing the 16 Gb of DDR4 to 64 Gb of DDR5 RAM, with the possibility of integrating therefore up to 2TB of memory in a single DIMM. Furthermore the clock speeds will be around 4800-5200 MHz (at least in early models) and an operating voltage of 1.1V.This equates to a 60% increase in frequency over the existing DDR4 standard while reducing power consumption by 10% (1.1V versus 1.2V). An interesting aspect of the DDR5 modules is that they will have on-die ECC support, eliminating the need to install external chips to support the same functionality and therefore will likely reduce costs as well. Good news for datacenter and HPC people. 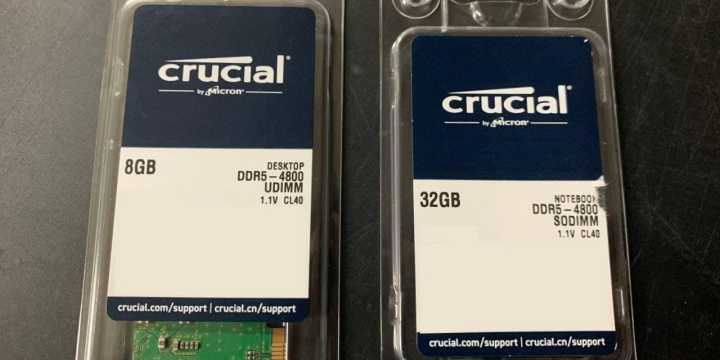 The Videocardz site has unearthed Crucial’s first DDR5 RAM modules. In the images you can see memory for both laptops and desktop PCs that the referring to the giant Micron would be down producing. It is about 32 GB SODIMM modules with a frequency of 4800 MHz and a default supply voltage of 1.1 V. The same specifications apply to desktop UDIMMs, except they have fewer chips and therefore fewer chips in one reduced capacity of 8 GB per module. Both modules have a CAS latency of 40 cycles, which appears to be standard latency for all DDR5 modules we’ve already seen. This will not initially be a huge advantage over DDR4, but the potential of DDR5 RAM memory technology is very high. Several memory module manufacturers have already announced that they are developing kits with frequencies from 6400 MHz up to 10 GHz and timing will certainly improve in the future. Finally, the new reduced power and voltage controllers will increase energy efficiency and the overclocking margin.

Asgard is a Jiahe Jinwei brand, a well-known PC component manufacturer. The Chinese manufacturer claims that it has already received the first batch of DDR5 RAM memory chips right from Micron for mass production. The company confirmed that the mass production trial was successfully completed with no problems. This means that from now on it will be possible to define a DDR5 road.

According to his claims, Asgard is already producing memory kits 16GB and 32GB DDR5 RAM with 4800MHz speeds. This is just the beginning. According to the roadmap published by IThome, Asgard is currently involved in the development of kit DDR5 a 5600 MHz. They would be available in 32GB capacities and 128GB with one CAS latency of 46 cycles. The company has yet to confirm the launch of its own 6400 MHz kit scheduled, but will be scheduled for 2022-2023.