In a world of ancient legends, darkness and a victim of evil, a demonic hero will take the side of good to save his land. So this is our Demon Skin review

After seven years of work and the inevitable name changes, first he had to be baptized The Forging Destiny and then About Savior Hunter, the simple and immediate title of Demon Skin that today we are going to analyze in this review. Forged from the mind of Denis Listov for the Ludus Future, this indie game draws obvious inspiration from Severance: Blade of Darkness and from the chapters of The Elder Scrolls for an epic adventure with more Nordic hues.

If this happens to you, ask Kratos of God of War, after his “raids” in Greece, how it feels to be in the cold facing wild beasts, ice giants and vengeful gods! Be that as it may, it must be said right away that the game has just recently come out for PC, but will soon also be available for consoles like PS4, Xbox One e Nintendo Switch. Before leaving our impressions of the title, it is best to pass the word to the guys on the development team for a moment.

Our goal is to leave a footprint in the history of video games. Our passionate hearts and eyes and the support of our community help us to continue and move forward. 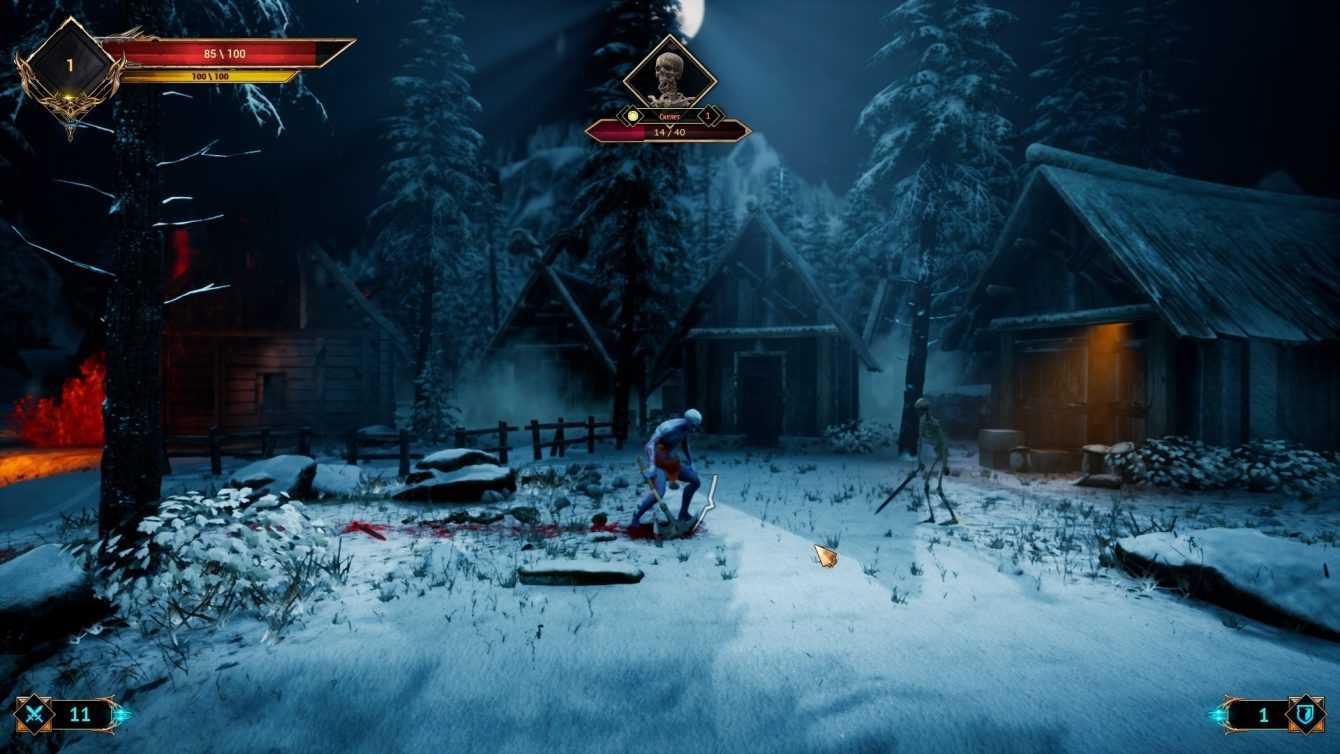 Welcome to a dark world

Facing the plot of Demon Skin, in the review phase, what we could immediately guess is that, in the world in which the game is set, the great undertaking that weighs on our shoulders will not be a walk in the park at all and monsters and difficulties of all kinds are ready to hinder our path in a scenario of Norse colors. During the opening movie, a mix of drawings and short animations, we go to discover that our hero, after many blows, perishes in the task of stopping the ritual of a wicked necromancer. But if Medievil has taught us anything is that, when we want to resurrect skeletons and monsters from hell, even the “good” awakens with them.

Back to walk on the battered earth from the darkness in the form of a demon (hence the name of the game of course) our resurrected hero will have to “grow” and recover his strength by facing platform-style levels “seasoned” by all sorts of aberrations. Skeletons, zombies, demons and various monsters they will in fact appear before him who, with the help of precious allies such as theOrder of Wanderers ed other creatures ready to repay ancient debts, he will have to make his way through frozen wastes, dark forests, deep caves and burning volcanoes to the final enemy.

A simple plot without excessive frills which traits we could define as “almost banal”, but which leaves the field free to gameplay and the development of a style of play by those who will play the role of our revived hero. 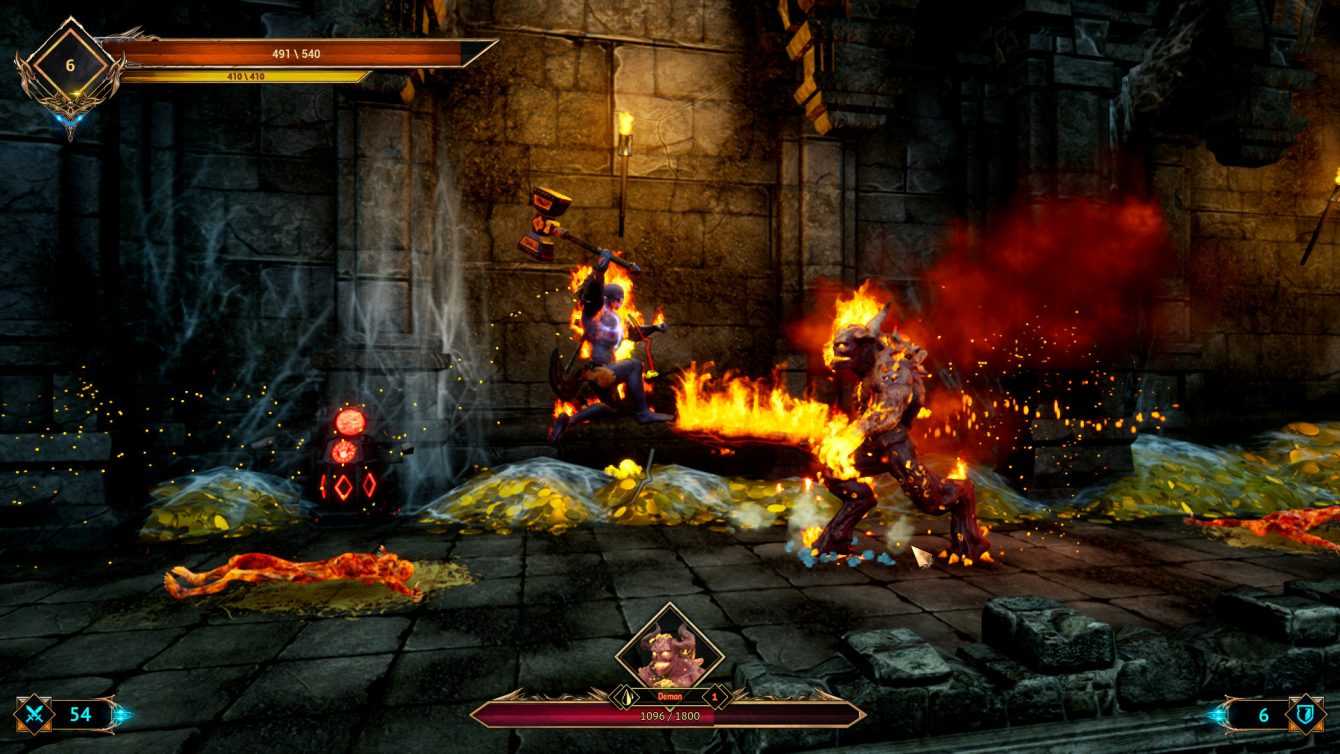 Fighting at will – Demon Skin Review

As in many other hack ‘n slash titles, but also run’ n gun like the good old Metal Slug or the more recent Cuphead, the storytelling it is rather “basic” and there are very few dialogue sequences between characters. Slightly longer however, the sequences are really “useful” such as i tutorial for the different types of jumping, attack, life recovery and choice of skills every time you accumulate enough experience. A must that, in addition to making us progress in history, also helps us to enrich the armor and appearance of our demonic protagonist.

On this last point in particular, it should be remembered that also i very branches of the skill tree they are quite “essential” and simply consist of attack, stamina e salute. Se l ‘attack concerns the power and damage inflicted by different weapons, the stamina it is the ability to “catch your breath” after such attacks as we will find ourselves using melee weapons such as axes, hammers and swords most of the time. Weapons which, if necessary, can also be thrown at opponents, going to retrieve them at a later time or directly from their lifeless bodies, or enchanted through magical attacks to thin out the hordes of enemies. Obviously the voice salute it doesn’t need any introduction. 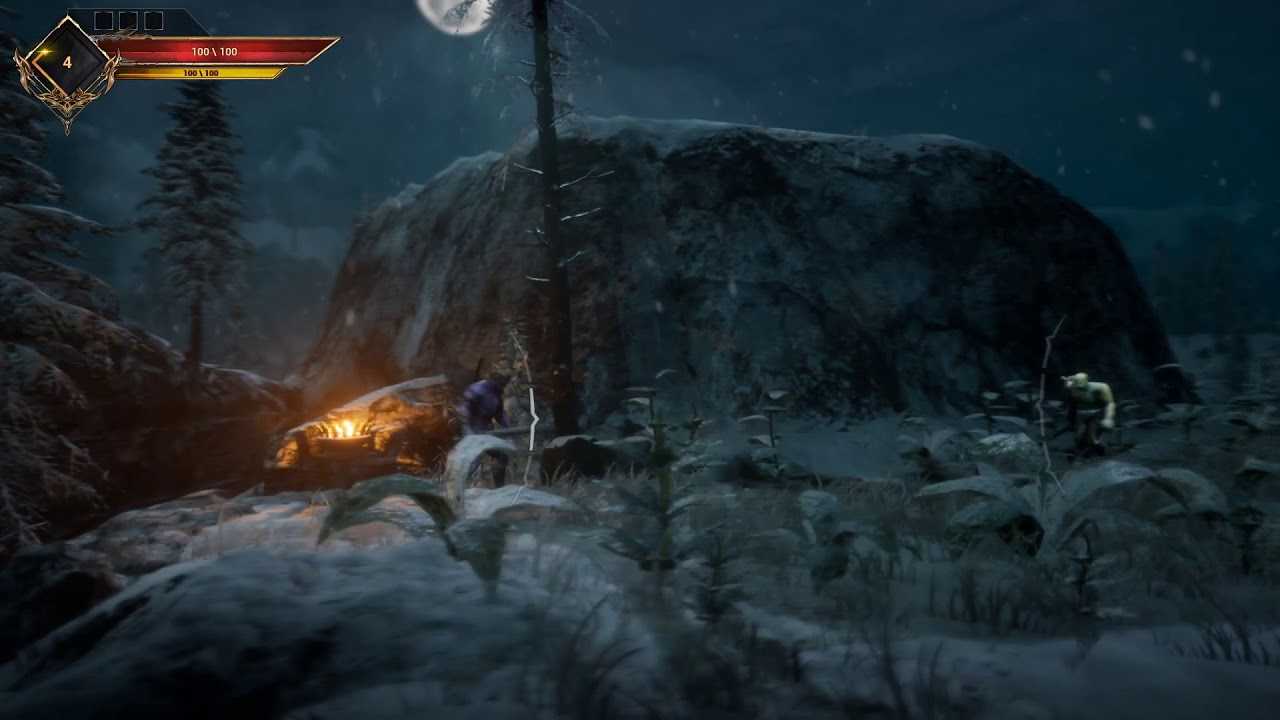 If anything, it is better to add that they really are there few ways to recover it in part or in whole, this raises the bar of difficulty quite a bit. To example you can eat a scorpion or the like, use the potions once you get them or go to the checkpoint to recharge and breathe a short sigh of relief. Sure, the rhythm turns out quite tight and tough, in any case without being overly hectic, and will engage even the most experienced player. It will in fact be necessary to strike at the right moment, avoid a clash when possible by rolling below the enemy, jump paying attention to the surrounding environment and always keep your eyes open.

Unlike the vast majority of more modern titles, here we are dealing with a much more 2D environment, but it will not be enough to simply attack to hit an enemy or to fully charge the power of our blow. With a system of colored arrows, a bit in the For Honor style to be clear, it will be necessary be careful where he will try to hit our opponent. In the event that the two arrows should match, the shot will be parried so it will be necessary to pay some attention to the stamina bar as well. If you then go to use a weapon such as a two-handed ax or a heavy war hammer, you will understand how the knowing how to dose your shots is of crucial importance.

After hordes and hordes of enemies, sparse allies and aids from the game itself, as in any self-respecting Dark Souls or platformer, who is missing in this journey full of blood, darkness and necromancy? Just them, i mid boss, each with its characteristics and its bestiality always ready to transform us into an inert and shapeless mass. 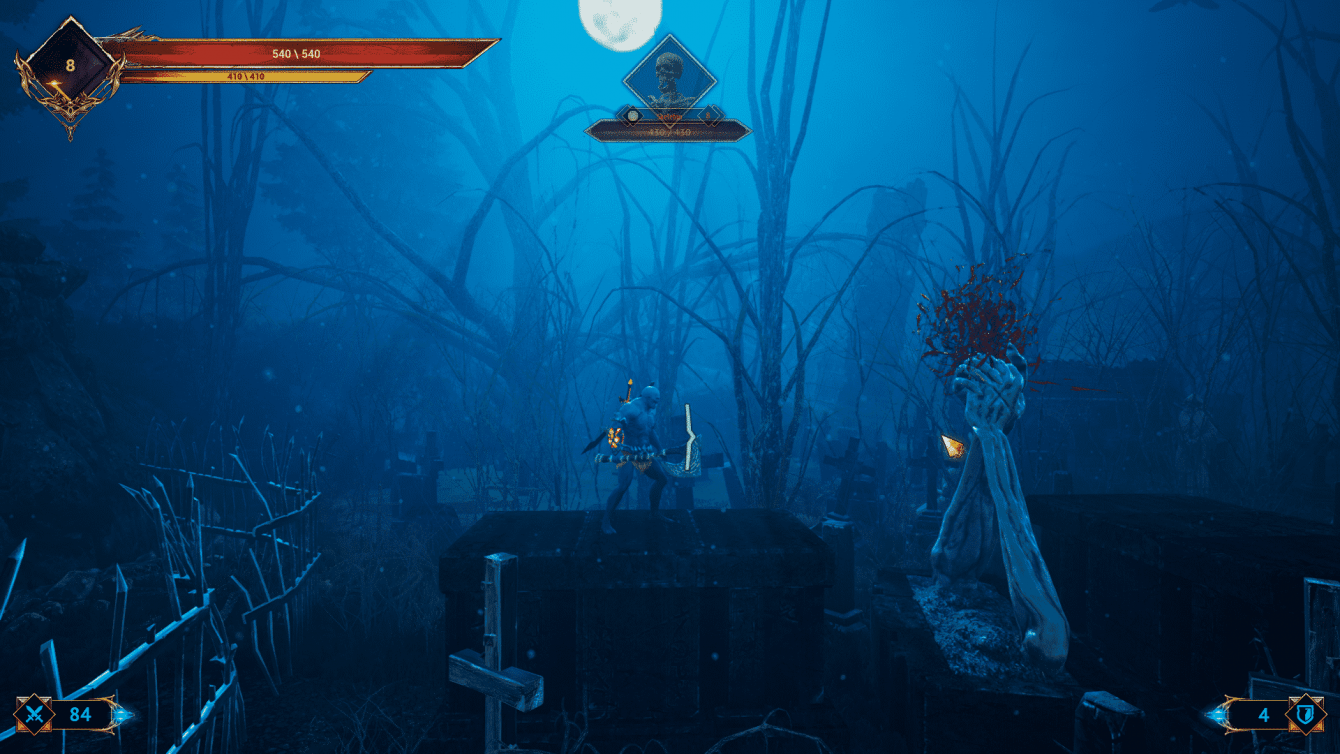 As you may have guessed, the “simplicity” and immediacy are the fundamental keys to knowing the game. The videos and dialogues, including the introduction to the macabre story, are quite short and let the action itself do the talking. So forget about endless sequences or moral choices of the caliber of The Witcher or Fallout, in this dark world what matters is the power combined with that lethal mix that is thecunning mixed with the right amount of ignorance.

Equally important are the tutorial for the various moments of the game, as we have just seen, but if you forget something, then know that on the official website they are re-proposed with lots of animation to help even the most “forgetful” player. 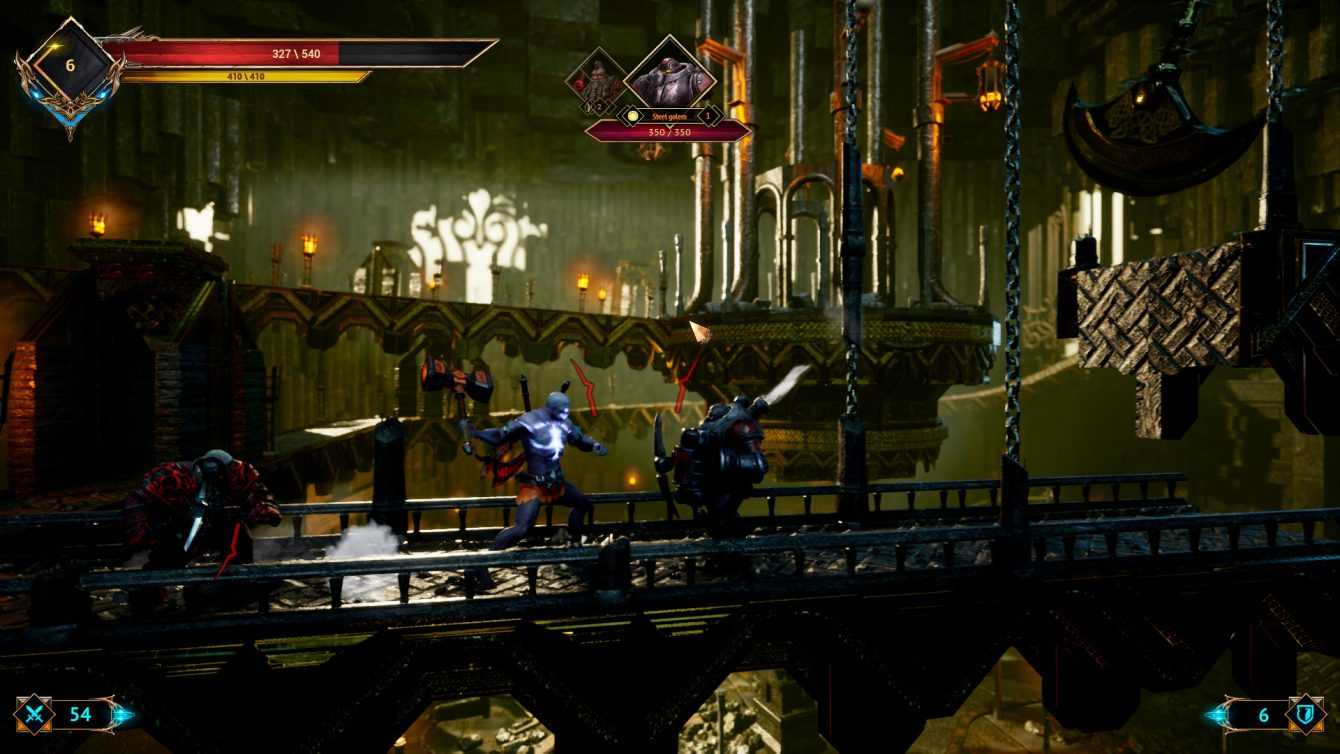 It scroll horizontally along all levels of play it is anyway a double-edged sword. If on the one hand, pursued by the right soundtrack from a dark fantasy title, it allows you to immediately throw yourself headlong into the action, on the other hand it keeps a flow of events and a fairly predictable spawn of enemies and without big surprises. The scroll horizontally then, especially some jumps that will be done with some precision, it is not the best for mouse and keyboard. We therefore recommend that you use a pad or, if you feel like it, wait for the game to come out on the main ones as well console.

Finally, it graphic style fits well with this choice, but after a few hours of play it will turn out to be rather dated and annoying. Furthermore, you will notice how the same mode of appearance of the creatures, resulting strongly repetitive. 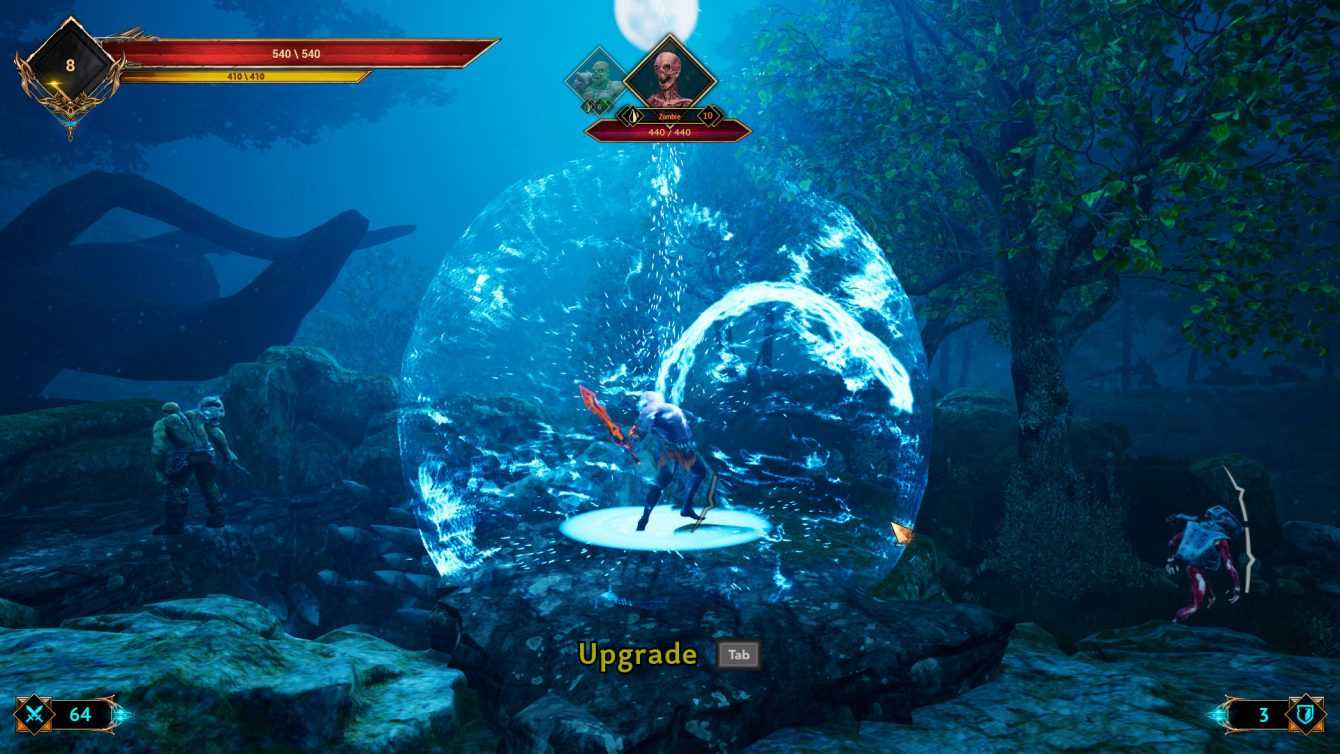 Going to write the final word on the saga

If in Pile Up! the watchword was relaxation, here it is the exact opposite. A fairly tight pace of play and a “forgiveness” that does not exist welcome the player and will not fail to bring up the hated “you are dead” screen quite a few times. And this it applies to both the “unlucky” casual gamers and the more experienced ones. Having to become familiar with the combination of mouse and keyboard, alternatively you can use a controller if it is more congenial to you, the commitment required is a lot. We therefore remember that lovers of the genre will be able to see the title on PS4, Xbox One e Nintendo Switch within the year.

In conclusion, if you want to try it too this title or a similar one at the right price, then, just click here. Instead, to be always updated on the constant evolution of the world of video games, stay with us on TechGameWorld.com!