Summer is the time of year where i dogs, which keep us company so much during the year, are often left by the family, in boarding houses or unforgivably abandoned to be able to take the summer holidays. Traveling with your dog by car, however, is not only possible, but if you follow small tricks it can be a wonderful experience, for you and your four-legged friend. How to prune the dog in the car? We will explain it to you today ad Auto for Dummies, the column that tells the secrets of the car world in a simple way. Are you ready? Bau!

How to transport the dog in the car safely? Seat belt, kennel or dividing net

The first point to consider is, without a doubt, how to keep it safe inside our car. In fact, it is not enough to get him into the car and whoever has seen has seen, but there are some normative which regulate the transport of dogs by car, specifically theArticle 169 of the Highway Code. This states that “On vehicles other than those authorized pursuant to art. 38 of the decree of the President of the Republic February 8, 1954, n. 320, the transport of a pet is allowed in conditions that constitute an impediment or danger to driving. ”

“It is also allowed the transport of pets only, even in higher numbers, provided they are kept in a special cage or container or in the rear compartment of the driver’s seat specially divided by a network or other similar suitable means which, if permanently installed, must be authorized by the competent office of the Department for land transport. ” What does this mean in practice? That it is possible to bring one, two or more dogs and cats in the car, but only if they are put in a position not to disturb the driver while driving. The Highway Code recognizes in fact four main methods to carry pets. The first is the “Classic” transport in the trunk. This is the only place where it is legally possible to transport more than one animal, and there are two distinct ways of doing this.

You can choose the classic method, with the separation of the compartment from the passenger compartment with a classic one net or dividing grid. This solution allows the dog not to disturb the “human” occupants, and has long been the most used solution. For greater security, however, today the so-called can be used kennel. What is that? It’s about a medium-sized plastic or metal cage which gives the dog its space to move but circumscribing it within a closed space, with different openings to breathe and see the world.

And if you have two or more dogs and want to separate them without purchasing two single kennels, you can install one “Grateful” separation between the two dogs, in order to divide the boot into two separate compartments. By law, in fact, the two dogs cannot interact too much to avoid games, quarrels or otherwise distracting situations. In this way, you will also get space for luggage, so as not to give up practicality entirely. If, on the other hand, you are traveling in two and do not want to give up your luggage, with only one dog you can let your friend travel in the rear seats. To travel with your four-legged friend on the back sofa, there are three legal methods. 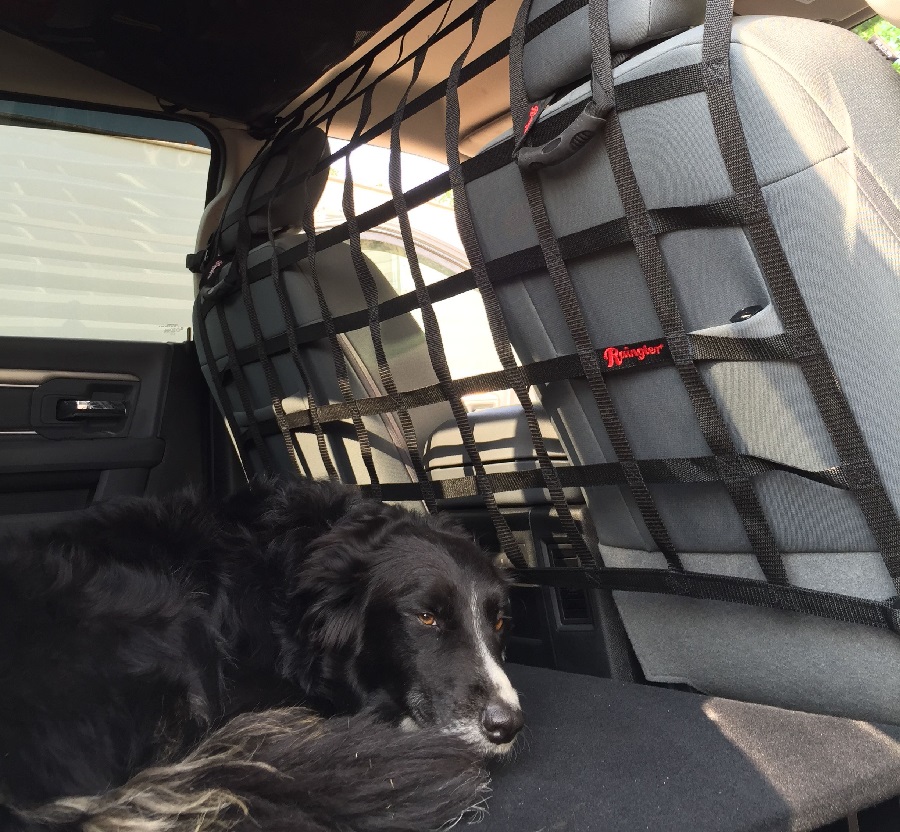 The first is the use of the kennel, however, mounted on the rear seats and anchored in place. This way, the dog won’t run around the car, but you can still use the luggage compartment. The second, more classic method is to install a mesh or a partition between the front and rear seats, or between rear seats and trunk, similar to that used in the trunk. Whether it’s canvas, rope, metal, removable or permanent, with that you will surely be in compliance. The dog will have all the freedom he desires, with the space and brightness that suits him to always be at ease.

The third method is to use a safety belt for dogs, a method that I usually use with my dog, Ariel, a German dog-like 20 kg that you see here in the picture. This solution though it is not suitable for larger dogs: it is allowed only for small and medium-sized dogs, weighing up to 35/40 kg. It’s about a simple safety belt with a carabiner attachment identical to that of leashes. The “belt” part is inserted into the classic anchor, while the carabiner hooks onto the collar or harness. This gives a certain movement to the dog, free to run around in the rear seats, but always in a manner safe and controlled. So even in case of braking or accidents it is anchored to the car. A system that makes you feel comfortable even when you arrive, preventing the dog from slipping away once the door is opened.

In any case, the kennel is the most cumbersome and expensive system, with the smaller models starting at 50/60 euros, while those for larger dogs are needed at least 100 euros. The dividing net is cheaper, with prices starting at 15 euro for those in string, to get to the 40-50 euro of those in metal trunk and more equipped ones. Finally, the belt is the most affordable, for an average cost of 8 euros at the waist.

Once you find the way that suits you, the real trick to teaching your dog to drive smoothly is graduality. In fact, if he has never been in a car before than with you, the most wrong method is to take it, put it in the car and leave.

In fact, dogs are not used to moving around in the car, and for this reason they can be quite a lot bewildered. Tight spaces, the inability to run and play, noises, lateral and longitudinal movements, acceleration and braking. These are all things a dog has never tried, and that make most puppies and adults uncomfortable. Of course, as there are people who suffer from motion sickness, there are also dogs that will always have difficulty traveling by car: but you can still get used to it in small sections, sometimes indispensable. In any case, in the beginning it is essential to be gradual. 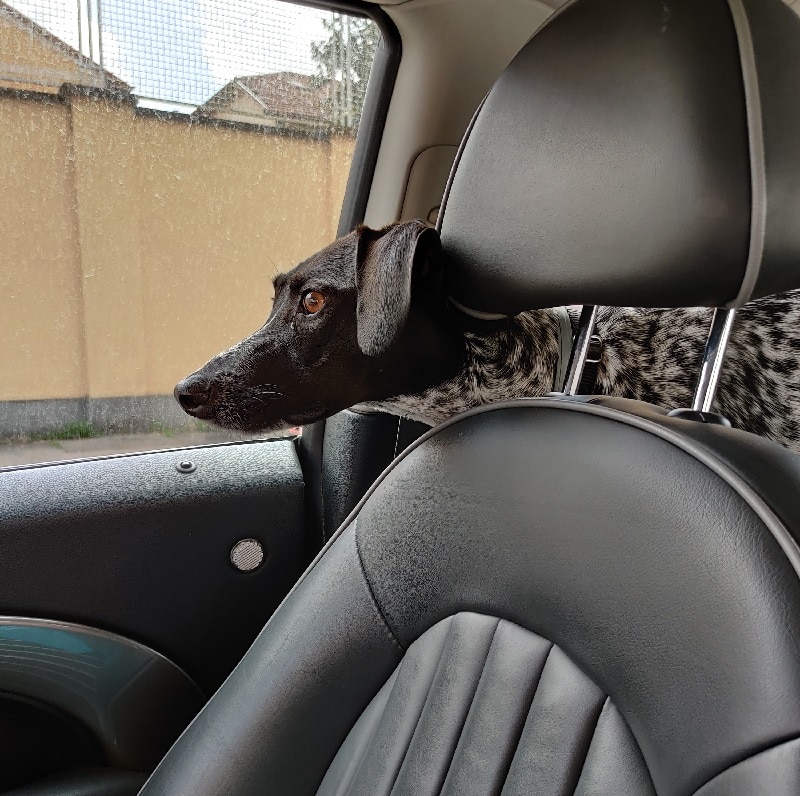 Begin by taking your dog to a nearby park by car, taking out the trash, or just walking around the block. A very quiet first trip, to get the dog accustomed to the car, of a couple of minutes at most. Then gradually increase the distance. First 5 minutes, then 10, then 30. If your four-legged friend is still strong and used to it, then there will be no more nausea or discomfort, and you can start planning longer trips. To do the “litmus test”, plan a trip out of town for an hour, in order to have the possibility to check in one day if your dog is ready for a trip with you. Sure, he might still get bored and not feel at home, but for that we have two more tips for you in a moment.

First of all, in fact, it is important preserve the health of the car and the comfort of your dog. How? If you choose to be accompanied with your loppid without using a kennel, choose a universal car cover, like what you will find at the bottom of the buying advice. Because? There are three main reasons. The first is that so you will safeguard the state of your upholstery, whether it’s in fabric, velvet or leather, and it will be much easier to clean and remove lint and dirt. Your pets love to live clean too! More, in case of “physiological accidents” it is much more convenient to clean and wash the cloth than the car seat.

Finally, the dog will have much more support with a less slippery surface, and will undoubtedly be more comfortable. These towels are pretty cheap (the most well-kept come to 40 euros), they have several functions and I’m very easy to assemble. To put them in position, simply place them on the sofa, hook the two straps behind the rear headrests, and pass the seat belt through one of the two holes with velcro to hook it to the belt anchor. A real breeze. They then adapt to all cars, from small cars to sedans and bulky SUVs, and can be used both in the trunk and on the rear sofa. 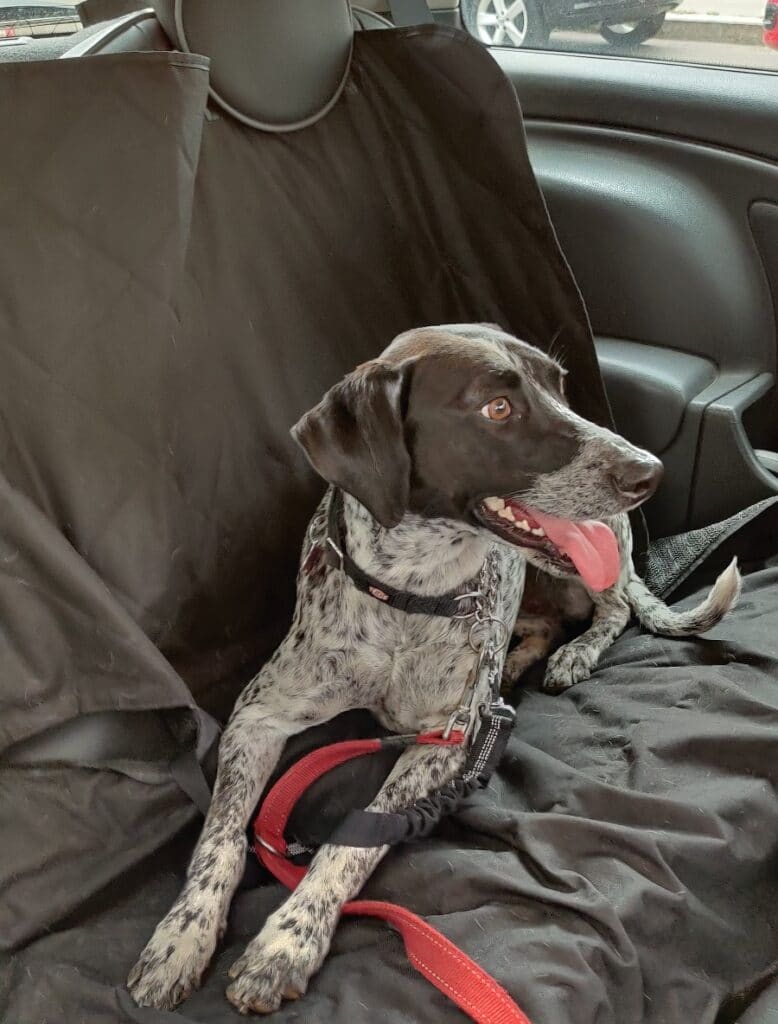 They are then multifunction because below they have a finish with greater grip, to prevent the sheet from slipping when cornering. In addition, almost all the sheets consist of three main parts: the back cover, the main part which covers the seats where the dog will rest and one third part, often waterproof, which has a dual function. On the one hand, it can be used for protect carpet and rugs, while the second use is that of room divider. Almost all models also equip the lower part with two straps to attach to the front headrests. Thus a kind of “purpose”Where to lodge your dog, in order to prevent him or her from reaching the front seats. Really smart. This towel is a purchase that anyone who wants to transport their dog in a car must absolutely make: indispensable.

Make it feel at home: a pillow, a game, something familiar will improve the journey

Our fourth tip for traveling with your dog in a car is to make him feel as comfortable as possible. As we said before, in fact, for dogs the car is not a natural object, with which they have had to deal with all their life. And just like us humans, in a new, initially hostile and unfamiliar place, dogs tend not to be exactly happy and relaxed.

Goodbye car then? No because just like us, dogs need something that makes them feel protected at home. Nothing is better than one cuddle and an occasional glance from the passenger or, in moments at the traffic lights, from the driver. On long stretches of motorways, however, when boredom and discomfort can be felt, the dog needs to have a reference to things that he considers familiar. 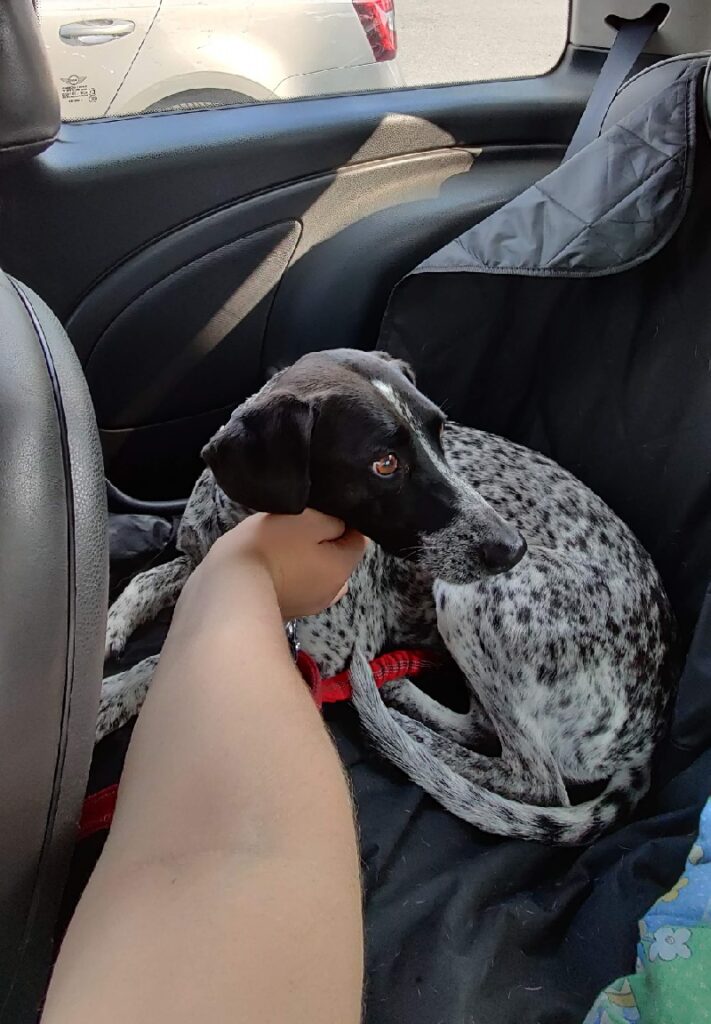 For example, for the first trips with Ariel I traveled with her pillow on the seat. A practical solution (because I had no other place to put it in the car), but which at the same time allowed my travel companion to get used to a new, noisy and unknown place, feeling at home with your beloved pillow.

Anything that reminds him of home is fine: a puppet, a chew toy, a bone, a chew snack, a ball, even a sock with holes in it.. The important thing is that it is something the …