Xiaomi has shown that it knows how to build truly excellent top-of-the-range smartphones. But one of its strengths lies in knowing how to offer less expensive but really performing phones. AND Xiaomi Redmi 10 wants to confirm this expectation: le technical characteristics and price they are really interesting.

After many rumors and rumors, Xiaomi has finally presented its new smartphone from Redmi family. And with the announced features, it promises to be a perfect phone to meet the needs of those who want performance without spending a lot.

The first news regarding Redmi 10 concerns the equipped chip: a Helio G88 at Mediatek. This new SoC debuts on the Xiaomi smartphone and is the new benchmark for Mediatek’s mid-range. There are due core CPU Cortex-A75, which can go up to 2.0GHz of attendance, accompanied by 6 core Cortex-A55. The graphics, on the other hand, are one Mali-G52.

Compared to the previous G85 of the old Redmi 9, this new processor supports displays up to 90Hz frequency update and 1080+ resolution. It also allows you to take pictures with sensors up to 64MP. It should be powerful enough to guarantee more than respectable gaming performance even with the most demanding video games. Do not expect performance equal to the top of the range (like Xiaomi’s Mi 11). But this chip promises more than respectable solidity and responsiveness.

The other technical features of Xiaomi Redmi 10

Accompanying the Helio G88 processor, we find three different combinations of RAM and fixed memory of the device. The base presents have 4GB of RAM and 64GB of memory, enough for those who want to save money by giving up something in terms of multitasking. The version 4+128GB it is for those who want more memory, while those looking for better performance can count on the combination 6+128GB.

The battery is from 5.000 mAh, which combined with the Mediatek chip will probably mean almost two days of autonomy (depending on use). There fast charging at 18W it is not the most responsive on the market but it is certainly appreciated, especially in this price range. Excellent 22.5W charger included in the package. A gem is there 9W reverse charging, to charge headphones and other accessories.

Also, you will find a fingerprint sensor side mounted, two stereo speakers. And then a card slot microSD, dual 4G VoLTE, Wi-Fi 5, Bluetooth 5.0, GPS, IR blaster, USB-C and a 3.5 jack for headphones mm.

If the technical equipment is very good for the price range, the screen and camera are really excellent. The display from 6,5 pollici e in Full HD+ with resolution of 2400×1080 pixels. It will have a maximum refresh rate of 90Hz, that with AdaptiveSync it may vary between 30, 50, 60 and precisely 90Hz. We wait to have it under our eyes to evaluate its quality. But on paper, it’s hard to find better without going up in price.

Even the photographic sector is really complete. The main sensor should be 50MP, accompanied by a ultra-wide da 8MP, a 2MP macro it’s a 2MP depth sensor. We reserve the right to evaluate the quality of the photograph in a future review. But the foundation for a stunning budget camera is all there. It also does not lack the 8MP front camera. 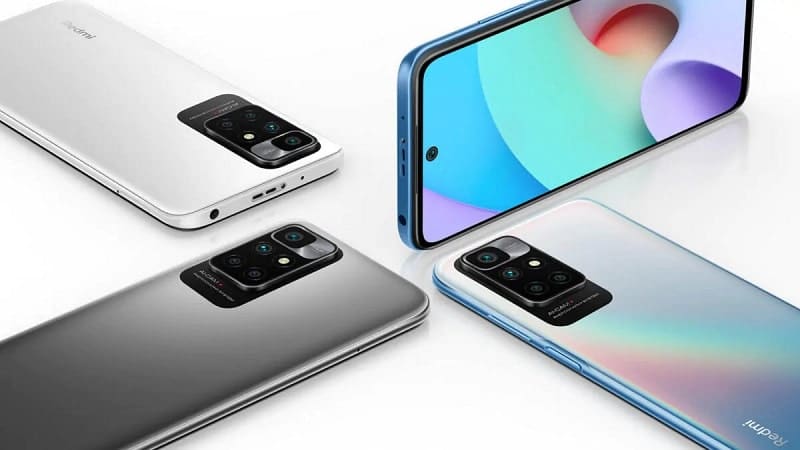 Redmi 10: price and availability of the Xiaomi smartphone

For the moment, Xiaomi has revealed the price of the new smartphone only in Malaysia. But the company has disclosed a price of 179 dollars for the 4 + 64GB version, 199 for the 4 + 128GB e 219 dollars for the 6 + 128GB one. Really exceptional prices if they were to be confirmed in the European market.

In Asia the phone becomes purchasable from August 20 but we expect that the company will soon communicate the availability of Xiaomi Redmi 10 also in our market. Italy offers a nice turnover for the Chinese company and we are sure that we will soon be able to find it in the Mi Stores.

What we do know for sure are the three colors of the new device, which you could see in the images. They are officially called Carbon Grey, Pebble White e Sea Blue. And the dimensions: the device measures 161,95 x 75,53 x 8,92 mm in size and weight 181 g.

We will keep you updated for any news. This new smartphone promises truly excellent value for money.