In this preview we will get to know Going Medieval, the title developed by the guys of Foxy Volex. Is Banished’s Heir Coming?

Never before in this period is the need for some old school style management software, able to thrill the players and keep them glued in front of the screen for hours. Banished for many it was a pillar, able to give many a complete and well-structured experience. Getting your settlement to survive wasn’t always easy, but it will be the same for this new title released by The Irregular Corporation? Let’s start this preview and find out together Going Medieval.

The premises are there, but …

Before continuing with this article, we must point out that the game is still in early access. It is therefore not a definitive version and it is easy to run into some bugs or graphical glitches. However, it is possible to notice what is the basic structure of the game, its most intrinsic mechanics and some slightly more advanced features. Already from this we can therefore say that the game has a very good foundation, even if some details for the moment have left us somewhat perplexed.

Before starting our adventure and building our little village, we can select some parameters that will allow us to live a more or less comfortable experience. We start first from the type of modality we want to face – whether a peaceful adventure without enemies or with a more difficult challenge with increasingly stronger waves – and the relative difficulty. We will then move on to starting conditions among which we will be able to choose the season, resources, equipment and number of settlers.

In this screen we will find two preset modes, but if the conditions are not to our liking we can still create a new task with the settings that please us most. Finally it will be up to our settlement and the settlers. In fact, in the penultimate screen we will configure the name, the emblem of our settlement, the type of map (mountain, hill or valley) and the size of the same.

In the last one we will select the various colonists, each with their own parameters, randomly choosing the ones that best suit our needs. In conclusion, wide customization to live various experiences more or less demanding and diversify from each other.

… The gameplay is sometimes too slow – Going Medieval preview

Although the diversification is so broad, the gameplay can be too slow and repetitive. This is mainly due to the few unexpected events, whether positive or negative, present in the game. Also there settlement growth in the early stages of the game it turns out really slow. The main problem is the impossibility of increasing the number of settlers except through the unexpected, which are in fact quite scarce. Basically speaking, we may have a new settler per season or so. In some cases we will be able to have two, but it is really a very rare possibility.

You will therefore understand that it is not exactly the best from this point of view. However, although there are problems in this regard, the gameplay is still handled really well. Important are the job screens, in which you can choose the various priorities for each job based on the various characters, and that relating to programming of the day. In the first it will be possible to assign a priority level from 1, the highest, to 5, the lowest, for all the various work that can be performed, so that each character is able to perform what best suits his statistics.

In the second one you can decide the work shifts of the various characters, but not only. Here, in fact, there will be more actions that can be assigned to our colonists, among which to sleep e have fun. In fact, each inhabitant of the settlement will need a certain number of hours of sleep in order not to risk fainting due to fatigue. Also to make them happy you will also have to assign them tasks “playful“, Such as playing or praying. In short, these settlers are certainly not robots without feelings or pleasures! 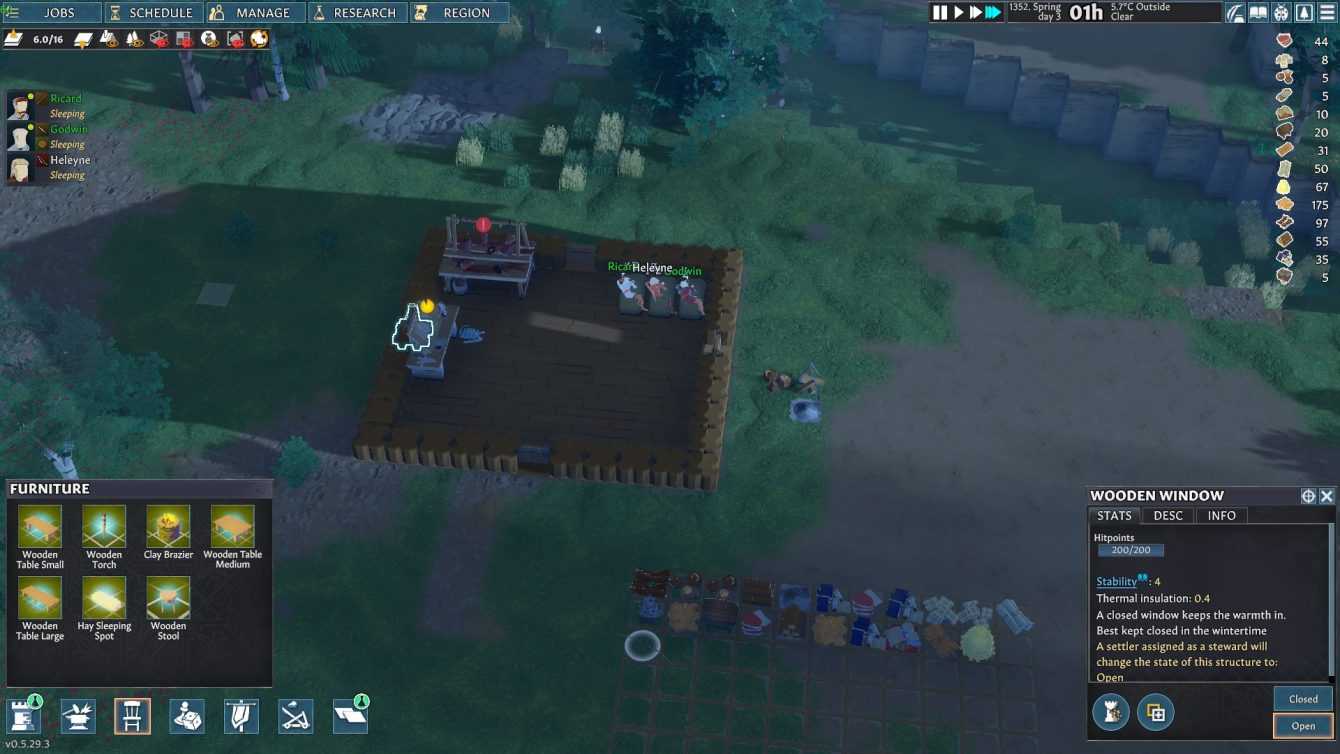 Although Going Medieval is well organized from this point of view, a really sore point that must absolutely be reported in this preview comes from the AI. In fact, during the hours of play we noticed how this is not properly programmed. Although in general there are no really important problems – for example, one assigns a job and settlers make a completely different one -, however, in the long run some small problems have arisen that are not exactly “invisible”.

One of these derives from the overlapping of works. In the initial phase with few settlers, you cannot give high priority to just one job, but each settler will have to cover more than one in order to progress. The problem comes precisely from this overlapping of priorities. In fact, settlers will be more inclined to do just one job. For example, if they are focused on cultivating the fields and someone will need to cook something because the food is running out, we will have to change priorities, otherwise no one will dedicate themselves to this activity.

Obviously the game is still in early access, but these small details absolutely had to be reported because risk seriously undermining the player’s experience. Imagine facing the most difficult challenge of the whole game in which every mistake is fatal. You will understand that losing due to less than perfect AI is not the best. 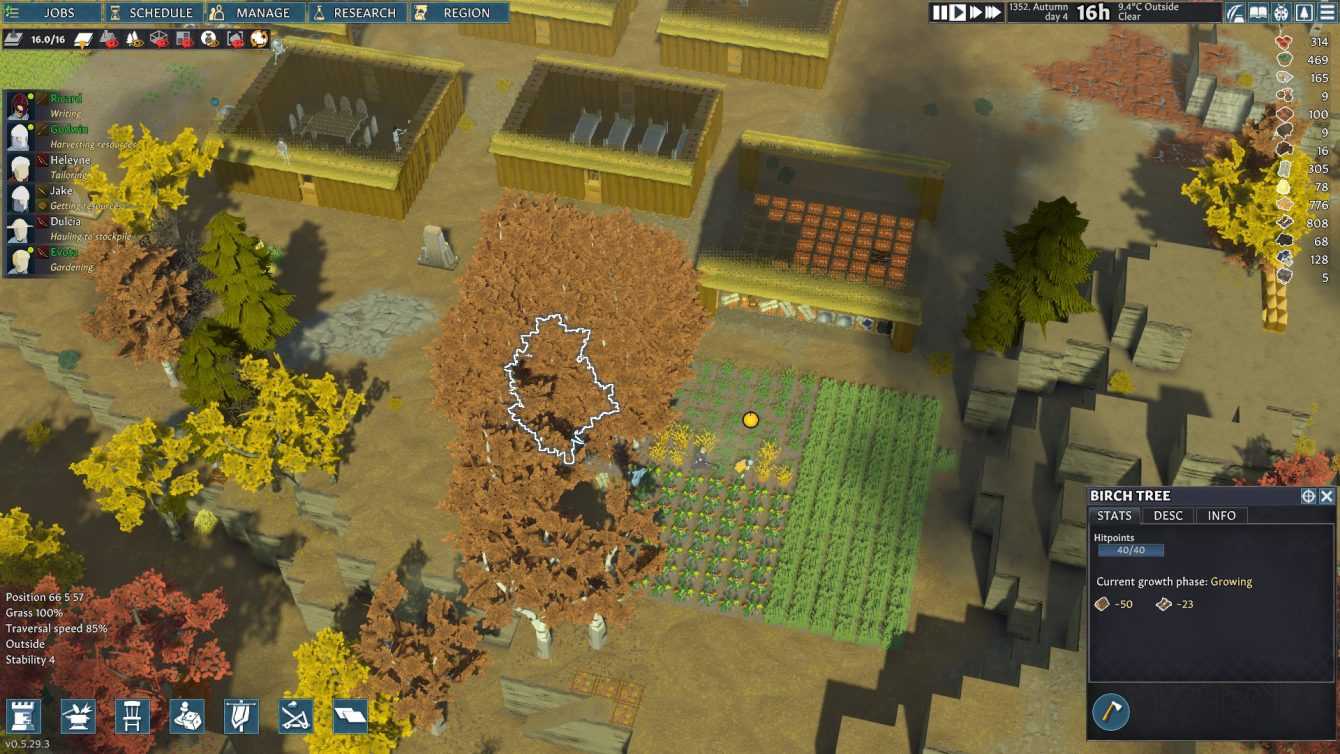 The dark side of the title – Going Medieval preview

In this test carried out on the title, one section most of all has left us somewhat perplexed. In the present UI you can see in the upper part, next to the screens of the jobs, the day’s programming and the search, the section dedicated to the region where your settlement is located. There will obviously be other settlements here, but their role has remained obscure to us despite the various hours spent on the title.

In fact, it is not possible to interact neither with friendly camps nor with hostile ones. It will therefore not be possible to attack or trade with others, so sincerely we do not understand the reason for that screen. Here, in fact, you can only see the influence of our camp on the region but nothing more, a somewhat irrelevant data for some aspects during the game. Whether it is a still hidden function ready to become active in the coming weeks or after the actual release, we do not yet know. 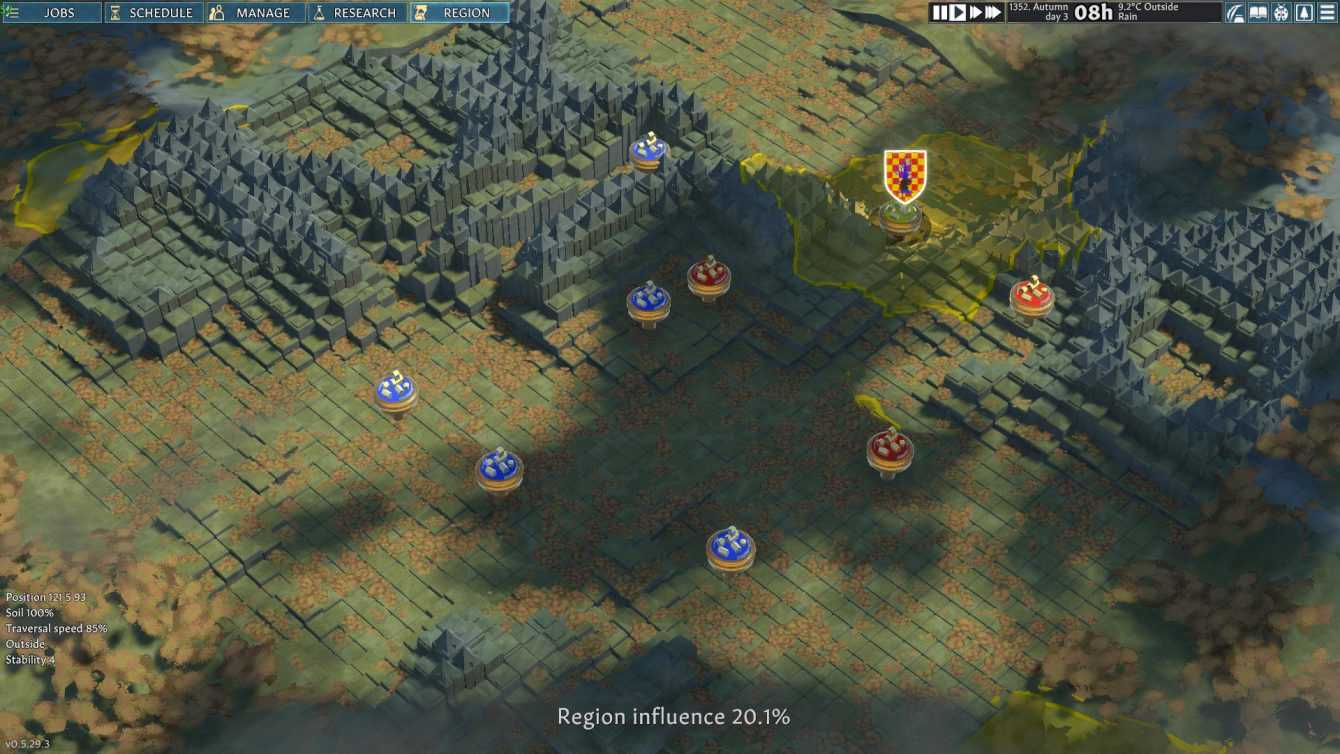 We have now reached the end of this preview on Going Medieval and it is also time to draw some conclusions for this early access. Obviously that warhead it is not the final version and therefore something written up to now could undergo changes in the coming months. Currently the game comes with a good foundation very solid which will surely guarantee good hours of play to those who are passionate about this genre.

Making your own settlement will not be fast due to a “slowness”Of the game in terms of acquiring settlers that actually made us turn up our noses a bit. This combined with an AI not properly programmed at best, they will cause quite a few problems during the adventure, especially at higher difficulties. However, some functions remain very positive, such as the search that will allow us to build other structures useful for progression.

Food degradation is also very well managed. In fact, unless they are sheltered from the elements, perhaps in a special warehouse that we will have to build ourselves, over time they will be ruined, becoming useless. There is also no geolocation in Italy, but it’s not an insurmountable problem. Indeed the English used is quite basic and within everyone’s reach. In short, the conditions are all there to become a beautiful game that can keep many players glued to the screen. However first the boys of Foxy Voxel they will have to modify those small details that can compromise the experience.

That’s all for this preview on Going Medieval. We remind you that the game is available in early access on Steam at the recommended price of 22,99 €. However, you can find it at a slightly discounted price on the dedicated Instant Gaming page. To not miss future previews and reviews related to the videogame world, keep following the pages of techgameworld.com!