The concepts of Kingdom Hearts are a bit cryptic: we have compiled a handy glossary for you before the arrival of the series on Switch

Even with the arrival of the whole saga on Nintendo Switch thanks to the collection (on the cloud) with the high-sounding title of Kingdom Hearts: Integrum Masterpiece, there are still those who might be undecided due to the pre-series fame for its complex storyline, which is why we have compiled a glossary. We will try to be as vague as possible in our turn, but where it is indispensable we will not spare ourselves a few spoiler. After all, even the most die-hard fans of the series like who is writing to you would have trouble telling you the meaning of the two words from which the franchise takes its name.

It would be enough, in some ways, to limit ourselves to talking about the conflict of the different sides of the Force, but this explanation would be enough only for those familiar with Star Wars, leading to other problems. Certainly, those who know the saga in passing know how to sum up the dialogues with sagacity: “light, heart, darkness”. All terms, these, as well known to those who love the series as they are malleable according to the context in which they are inserted. To avoid headaches for fans of the first hour, or even just for Nintendo purists who over the years have had to settle for spinoffs such as Chain of Memories, 358/2 Days, Re: Coded and Dream Drop Distance, here’s what you need to know.

Getting started: where to start?

Before even extending ourselves to the Kingdom Hearts glossary, one thing needs to be specified. The four titles we’ve listed above boast the sad distinction of being anything but self-contained. Specifically, 358/2 Days is a interquel (neither prequel nor sequel, but a title set concurrently with the events of another game) which is placed between the events of the first numbered chapter and the second. In short, getting confused is very simple, but for English speakers among you there may be an easy way to avoid it. With all due respect to YouTube, of course.

The Italian youtuber (yes, Italian) Everglow has embarked on the titanic enterprise of breaking, rearranging and assembling (breaking up the audio!) All the cutscenes of the saga, in the project (now completed) entitled Kingdom Hearts Timeline. The result is a unique narrative, which allows you to clarify the multiple flashbacks (or flash forwards, as the case may be) and to combine them all in a coherent way. But if you don’t want spoilers and you still need the chronological order in which to play the saga, we have taken the trouble to extrapolate from the videos an image that puts everything in perspective. 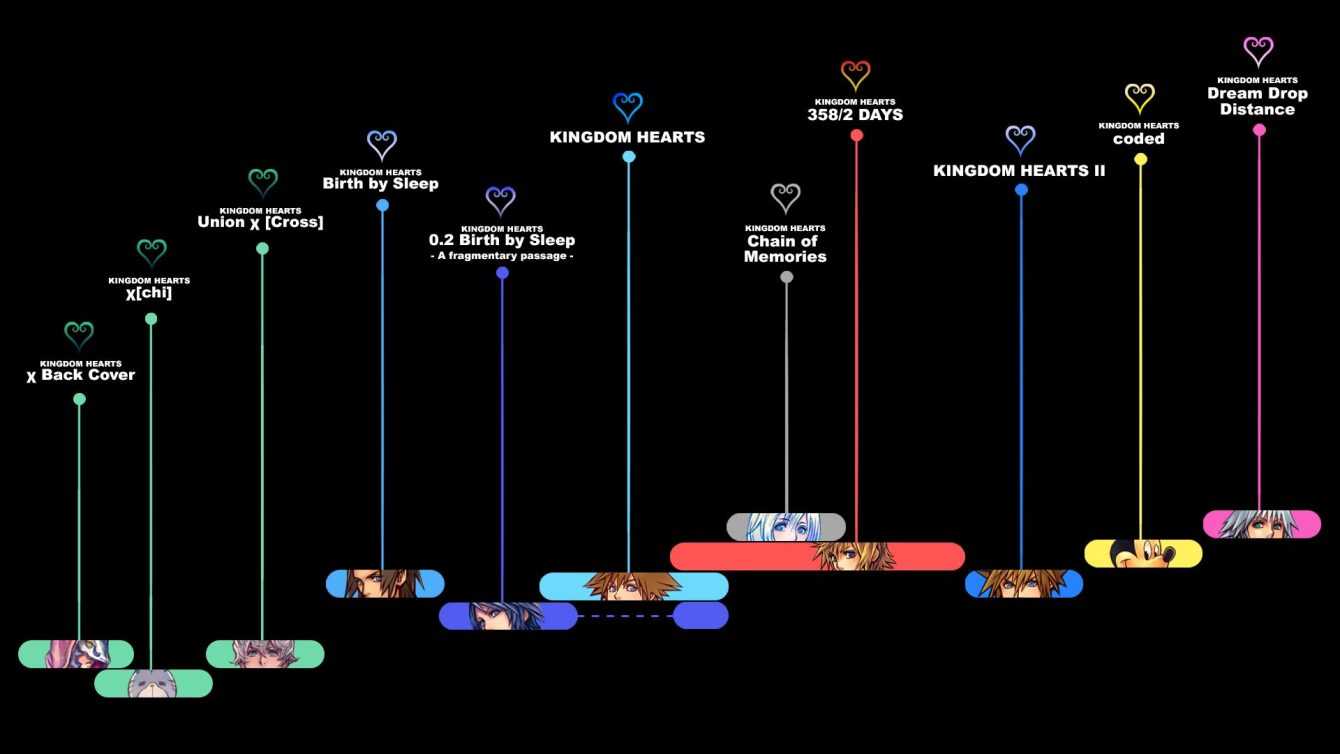 There is a lot of talk about the heart in Kingdom Hearts, and unraveling (pun not intended) the concept in our glossary will not be easy at all. In short, although the universe of the crossover series contemplates the concept of the heart as an organ (Il Bosco dei Nani, Birth By Sleep; The Caribbean, III), in general this can be translated as the abstract concept of “anima“. However, those who succumb to darkness (or when some dark beings do, but we’ll get to it) vanishes leaving only a holographic and luminous heart, at the expense of how the heart in a metaphorical sense and the soul are the same in the game world. What.

Similarly, i worlds they tend to have a heart, absurd as it seems. The corruption of darkness can transform an individual, but in the case of a world (treating it as a real organism) when the darkness affects its heart, demons begin to spread everywhere. Demons composed of darkness as we will see below, can be Heartless, Nobody, Nesciens or Dream Eater. Each of these creatures usually succeeds in the intent to recall a powerful example in theme with the game world, but after the defeat of the boss it is only the regular enemies that appear. 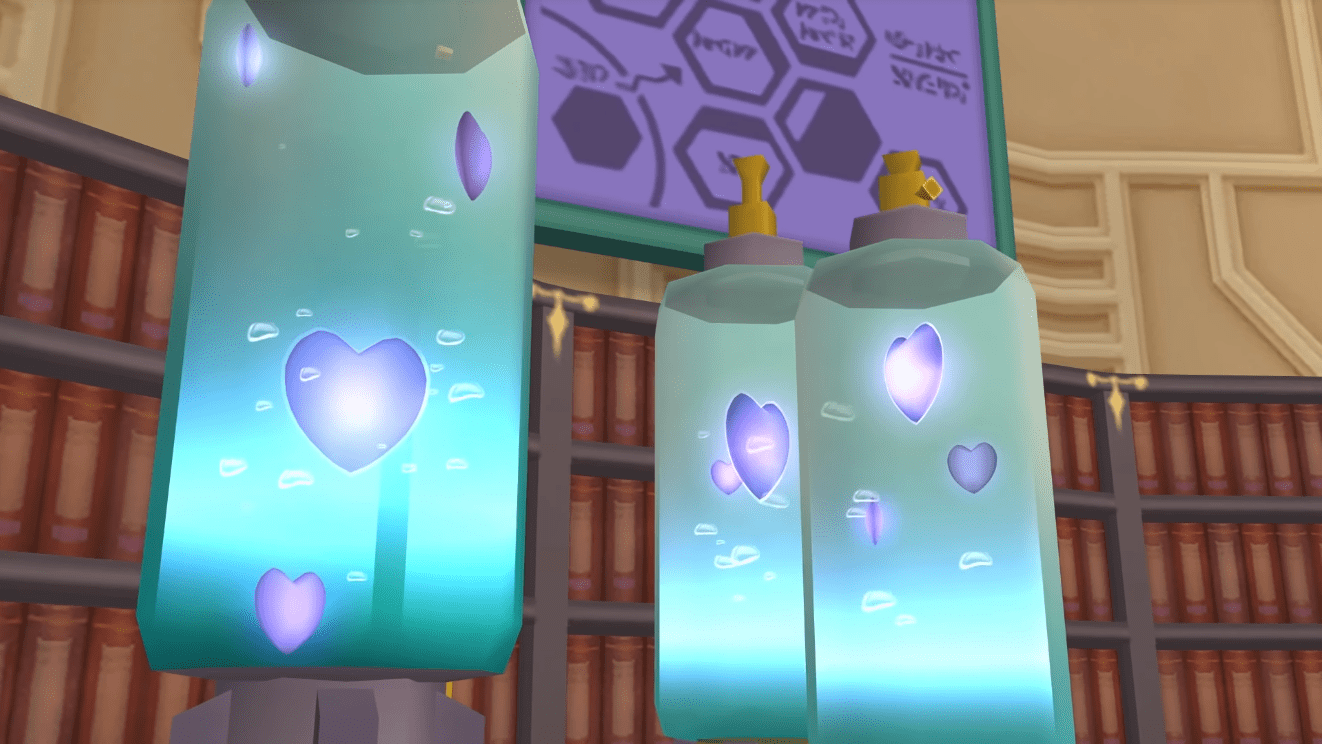 Similarly to what was said about the heart, also in the case of light there is a coexistence between the simple source of illumination and something deeper. Drawing heavily from what is seen in Final Fantasy, light is to be understood as a positive and benevolent force, which coincidentally also tends to dazzle those present once used in combat. Its implementations in battle may vary, but Square-Enix’s canon states that Holy (“Sacred” in Chain of Memories, “Holy” in English) is among the most powerful spells of light. Minnie is able to use it in the second numbered chapter.

The set is the number most associated with this element, for two different groups of people. The first, introduced in the first game, is the group of the “Princesses of the Heart”, or seven girls with a particularly pure heart. This does not mean the entire harem of Disney princesses, because they also include a little girl, Alice, and an original character born in the series, Kairi. The other five are Belle, Snow White, Jasmine, Aurora and Cinderella. Of the “seven new lights” of Kingdom Hearts III only four are known: Elsa, Anna, Rapunzel and again Kairi. Finally we have the seven guardians of light, including Sora. 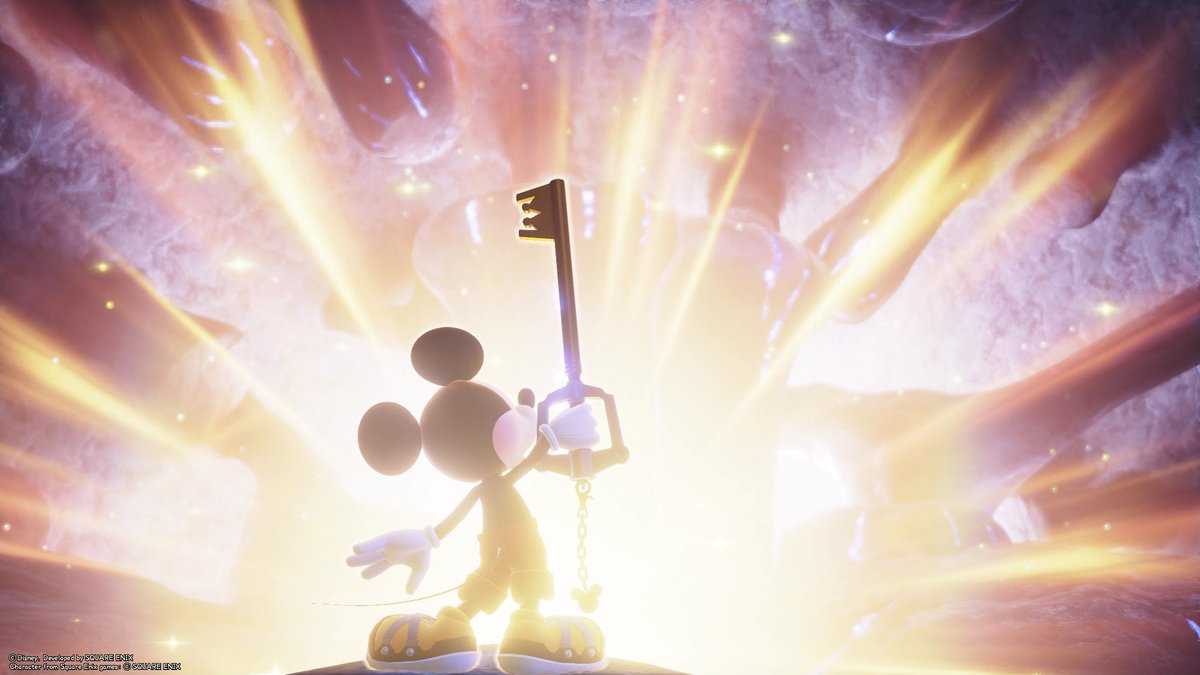 The same argument, although diametrically opposite, also applies to darkness. We are not only talking about the absence of light, but also about a dangerous energy capable of corrupting and manipulating both those who use it and the puppets of those who exploit it. Manipulating it, however, also allows for comfortable transitions between one world and another, as long as those who do so wear a special black overcoat. Some Heartless, referred to as “thoroughbreds”, are nothing more than literal manifestations of darkness. When darkness affects the heart of a world, very powerful and enormous Heartless emerge, while in a purified world only the smallest ones appear (for gameplay needs).

All antagonists boast a natural propensity for the domination of darkness, starting with Xehanort and passing through the Disney villains (Maleficent in particular). The number linked to darkness is the thirteen, which particularly distinguishes Organization XIII. As the series continues we also learn about heroes who manage to keep it at bay and use it for noble purposes, one above all the young Riku. A heart that succumbs to darkness can find refuge by experiencing a sort of coma within another body, as happened with Ventus (hosted by the hero of the series, Sora). 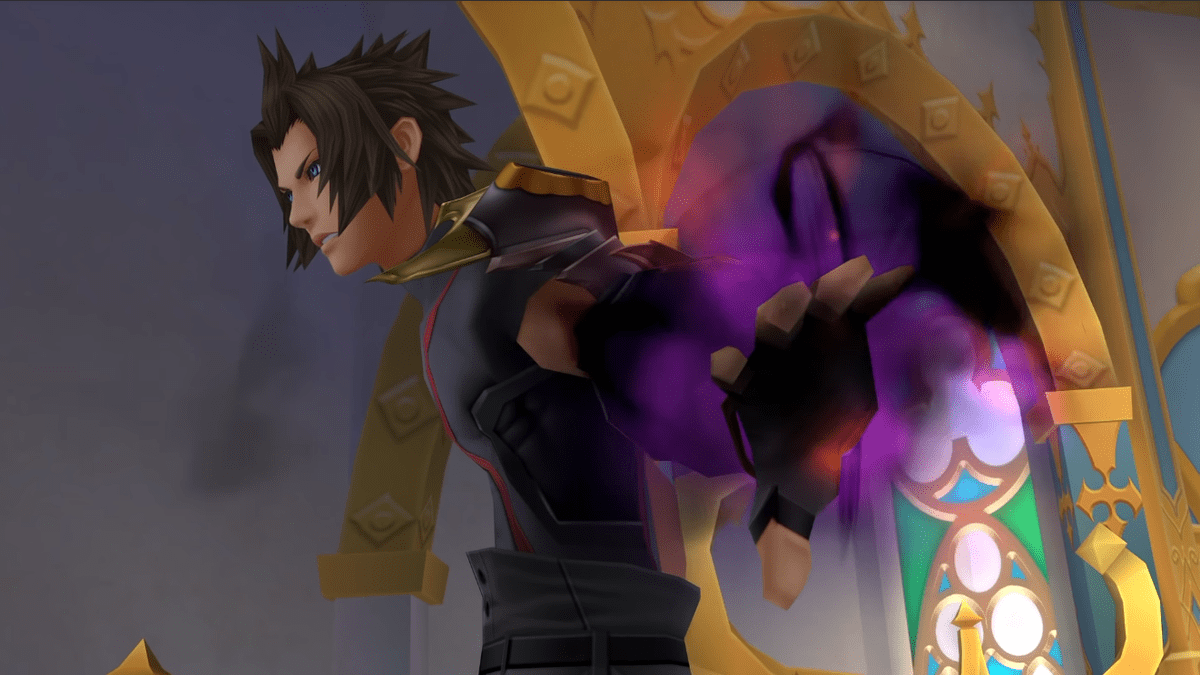 One of the most common misconceptions about the Kingdom Hearts series concerns its complex cosmogony, but by and large the conception of world for our glossary it consists of a multiverse. Every world draws heavily on the Disney feature film that inspires it, and this delineates its boundaries. Proof of this are the Deep Jungle (KH1) and the City of Bells (KH3D), respectively and expressly set in Africa and Paris. It is implied that there is other as in the real world even outside of them, but for gameplay purposes you can only explore what you see in the physical representation of the worlds: a hybrid between dioramas and planets.

In the events of Kingdom Hearts X, or “the time of fairy tales”, the worlds were expressly united to each other, but a huge conflict (we’ll get to that) caused a cosmic schism. The division serves to justify the limits made to the maximum number of worlds for each game, as the “ways” to reach them may or may not be open depending on where the clash between light and dark takes place. Furthermore, the opening lines of the first game make no secret of how much the worlds are actually dying: the stars that represent them, visible in the sky of any other world, are fading one after another. The Keyblade it mainly performs two functions. In combat, it basically acts as both a sword and a scepter. As for the fact that it is a real giant key, everything goes back to what we have said so far. A Keyblade opens and closes locks, be it chests, the interdimensional paths that connect the worlds to each other or the access of the forces of evil to the heart of the world itself. A Keyblade can indeed seal the lock of a world, thus preventing access to the most powerful forms of darkness (read: the bosses of the end of the world). Only a few can have one. The only implementation of the key features in combat is Sora’s Final Smash in Super Smash Bros. Ultimate.

Despite what was stated in the first game, the power of summon the Keyblade (and not to carry it with him by holding it on his back, as we see in the manga) he can learn it anyone. Sora found himself being a “chosen one” only for the circumstances. In ancient times, mastering the Keyblade was an art learned and handed down in what was an authentic order of knights, fallen into ruin due to the aforementioned conflict that separated worlds forever. Whoever is appointed master (regardless of whether he masters the light or the dark) can choose their successor. 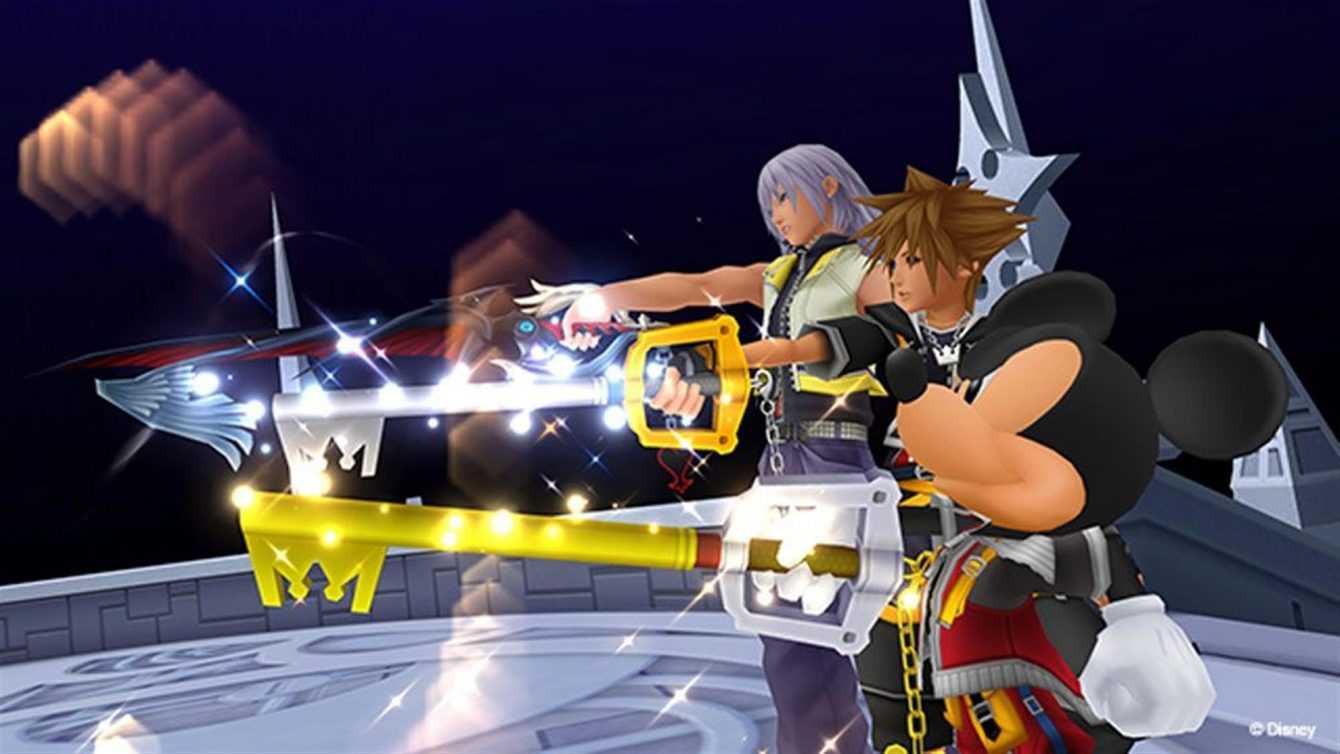 The Heartless are the first manifestation of darkness seen in the saga, combining the rounded shapes (probably) required by Disney in their design with Square-Enix’s need to give Sora demons to fight. There are two types. The first is that of Heartless Purosangue, with a (relatively) simpler design and born of darkness itself. The second instead is that of Heartless Emblema, which implement more complex shapes in their appearance and all sport the symbol in question. The latter, as the first meeting with them reminds us, are born from a heart subdued by darkness.

Exist exceptions particular to what has just been said. The first is that of Ansem, Follower of Darkness (not to be confused with Ansem the Wise; it is … complicated), who after having voluntarily transformed into his Heartless has maintained his human features. The only true sign of Ansem’s Heartless nature are the yellow eyes, typical of those who expose themselves too much to the dark, and the emblem on his chest. Following a sacrifice, Sora temporarily transformed into a Heartless, but as a sign of the humanity left in him he kept his eyes of another color. The larger Heartless who are bosses tend to be most of the Heartless Emblems. 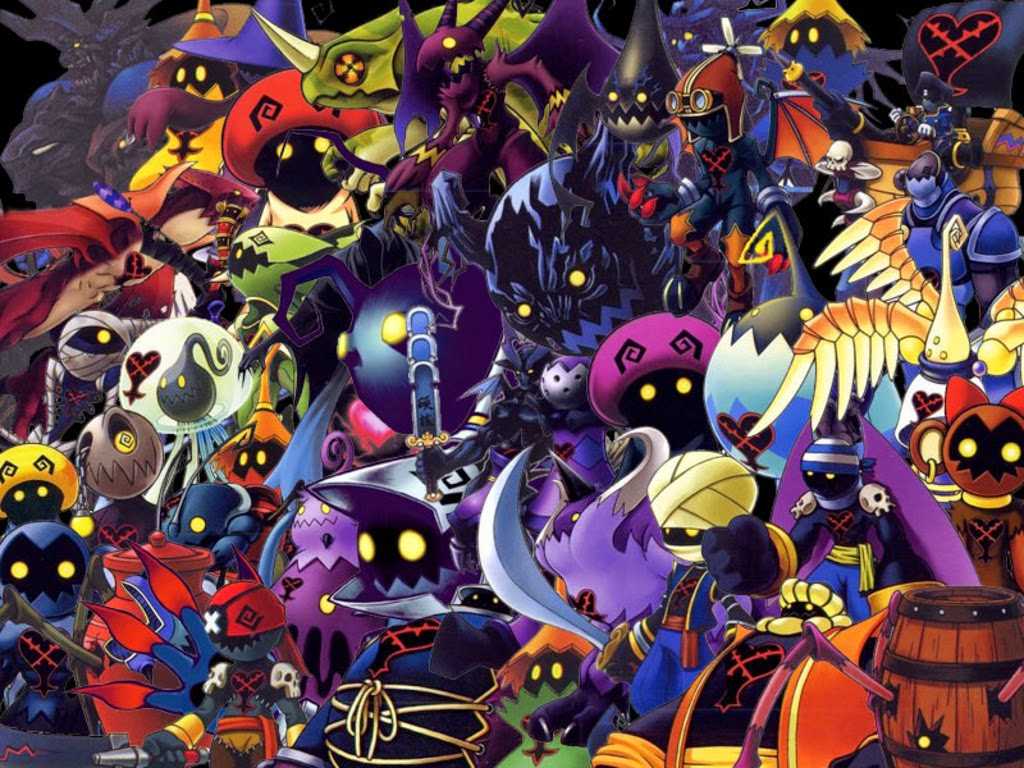 None – The Kingdom Hearts Glossary

Kingdom Hearts II (or, on closer inspection, Chain of Memories) establishes that the birth of a Heartless also corresponds to an empty shell to be left behind. This new category of enemies is called Nobody, and the whitish hues are not the only thing that unites them. Their movements tend to mimic (badly) those of a human being, making them comparable to a sort of zombie. They do not stand out for variety, limiting themselves only to a few variants based on their “masters”: the members of the aforementioned Organization XIII, which we will discuss in more detail.

A human with a particularly strong heart (that is, with a lot of willpower) can maintain their appearance …