Simplifying the fighting has made the fortune of the Danish license: find out in our LEGO Brawls review if it helps here

If you are familiar with the reviewer’s name written above, you will know broadly what opening words to expect from one of them. revieweven though it is only LEGO Brawls. Preambles serve to give context to a judgment, and sometimes an object of scrutiny can fit an editor’s background, while other times it doesn’t. In this case, if the experience for you is synonymous with authority (it is not, even if it helps), you can sleep between two pillows. The series that launched the entire genre of which the game is part, moreover, received a guide in due time (plus a late supplement), as well as weekly coverage.

As for the Danish bricks, the writer has dedicated a ranking of the best videogame adaptations to the franchise, as well as an evaluation of the youngest child. In other words, the familiarity with the two concepts that are found today at the altar is all there. Unfortunately, this wedding does not have the typical orange blossom scent; rather, it tastes rancid like weddings like Vegas gambling halls. That union of the profane bond seen only in the remedial marriage, with her father intent on aiming two sawed-off rods at the back of his unwelcome son-in-law.

Let’s talk about the basic problem that is the downfall of LEGO Brawls already at the starting point of the review. Let’s be honest: learning of the game’s existence during a phenomenal Nintendo Direct made us ecstatic. And why shouldn’t he have done it anyway? All the adaptations edited by TT Games have expertly mixed the genre of platformer with the combat mechanics which usually ruin them. It is one thing to boast the moveset of a random Kirby episode, with which to fight becomes a pleasure; another is to have in your hands a licensed game capable of reaching almost the same playful heights. Unfortunately, however, the chef is not TT Games.

The clumsy replacement is RED Games Co., for a reason that makes up the other cross that penalizes this title from the start. The game is indeed a port of a game released some time ago on Apple Arcade. We haven’t talked about plot or story precisely because the only one to talk about is the development background. You already know what coming from the magical (and tragic) mobile gaming world entails: stripped-down controls, bulky interfaces and, let’s face it, cheap quality four times out of five (which is why screenshots taken in portable mode won’t bother you too much) . A simplified moveset is the salvation of the titles of the late Traveller’s Tales and its three-figure rosters; what happens when combat is the focus of a title? 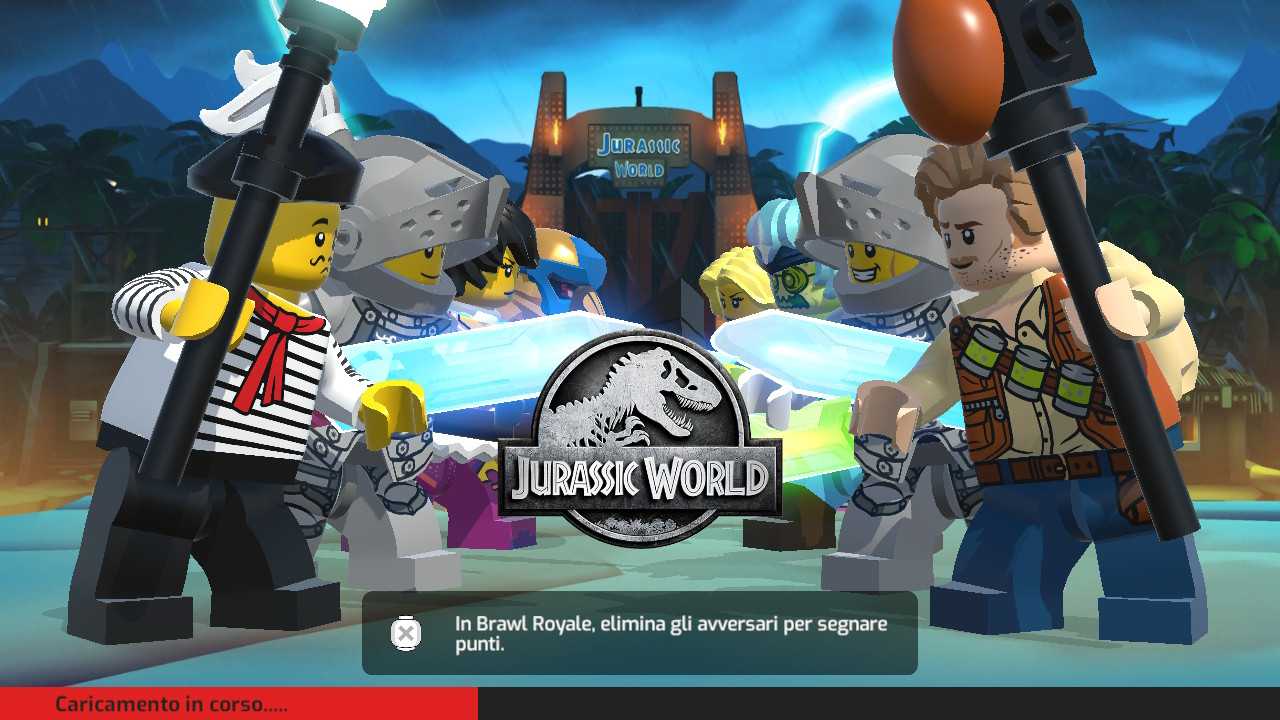 The King of the Hill – LEGO Brawls Review

What to expect, therefore, from the gameplay by LEGO Brawls? In reality, very little. The first start of the game immediately puts us, after choosing one of three different (and anonymous) “characters”, in a clash of the genre “king of the hill“. For those unfamiliar with the term in the gaming context, this is not an adaptation of the animated series by Mike Judge; rather this type of battle consists in dominating a certain area for as long as possible. As you continue to discover the various modes, they also take over screw clashes and classics deathmatch in which the player who makes the most eliminations wins.

The possibility of facing each other in three different types of clashes, in itself, is not bad if we count the premise without too many pretensions of the title. Unfortunately, it is the gameplay skeleton that is lean beyond all measure. There is only one button to perform a standard attack, which does not change in any way regardless of our directional inputs. By breaking the special containers we will receive extra disposable attacks to be exploited during the various matches, but when it comes to prevailing over our opponents without having anything else only the one who hammers the button the fastest wins. Not a good start, considering the genre of the game. 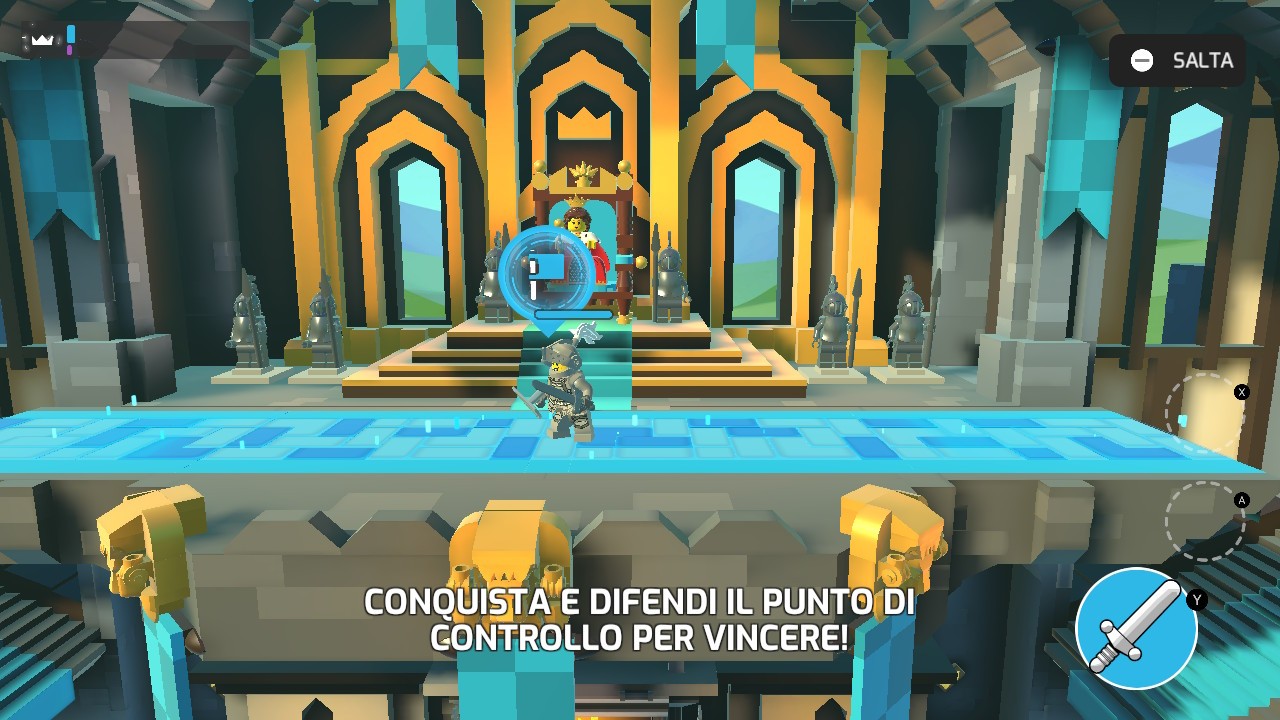 I content to unlock, it must be said, there are not a few. At the end of almost every online fight (and after we will explain why to specify “online”) the player is rewarded with something. This can be a component for minifigure (historically, the LEGO “men”), as it can be a complete skin with attached weapons or one of the so-called “Champions“. The latter act as an archetype for the fighting style and skills available to their own personalized minifigure: creating one requires starting from one of the Champions, and the final result bases its “moveset” on the starting character.

In other words, therefore, the Connoisseur (a living French stereotype) can beat opponents with his own baguette, but the rest of his range of moves depends on the starting Champion. The latter, as you get them, will join the roster with nice cutscenes in which the style we loved with TT Games seems to re-emerge. In addition, after the first clashes we will be asked whether to dedicate ourselves to unlocking the contents of a certain set, complete with scrollbar in Fortnite’s “Battle Pass” style. With the difference that everything is included in the price of the game. 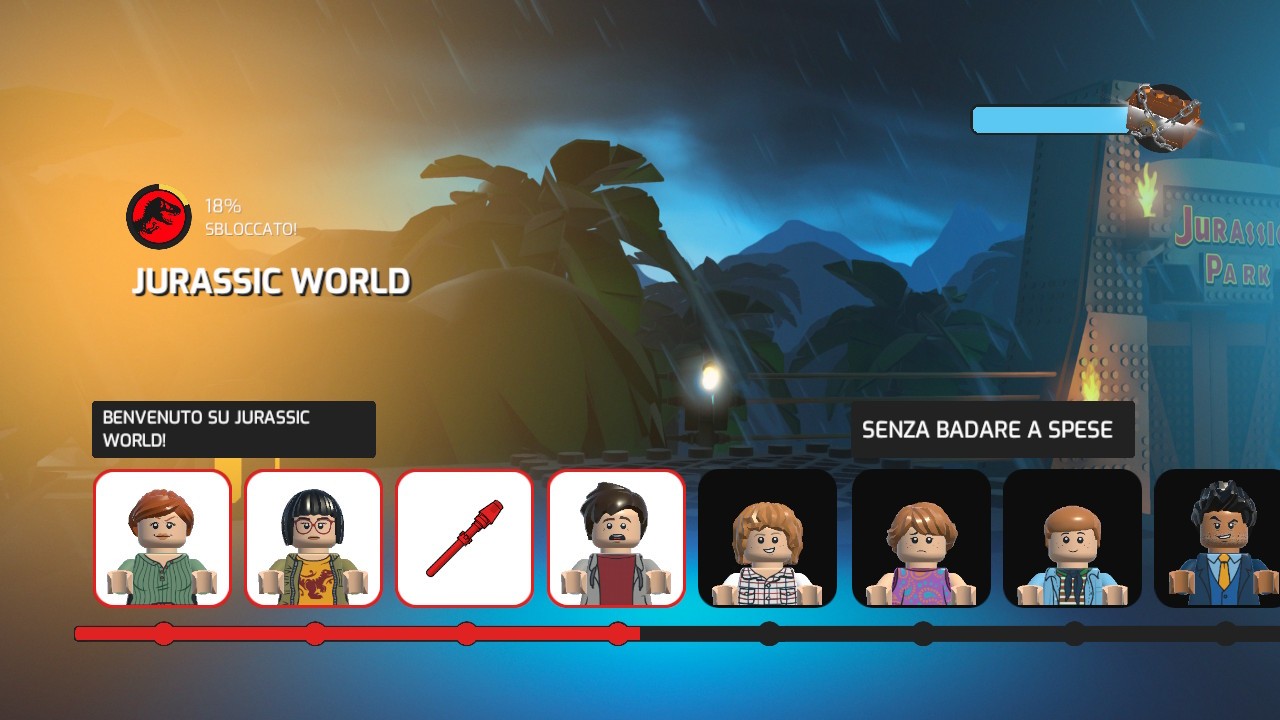 Unfortunately, the house of cards inevitably collapses once you set foot in main menu of the title. “Brawl“, Being in English” Brawl “, needless to say is the highlight of the game. During online matchmaking, the choice of your fighter is free (assuming you have not entered the lobby at the end of the countdown, which often happens) while the arena is put to the vote. Some scenarios are explicitly linked to king of the hill type battles, and therefore are inaccessible offline. The technical performance of the game, in moments of lag, goes from being tolerable to immediate (and justified) rage quit.

The main screen, at the top, allows us to access the global rankingto a window for the notifications currently (draft of the article) inactive, under item Help (the icon “?”) and the wheel for the various options. As for the help screen, there is little to say: you can read some tips for beginners, replay the tutorial or consult a web address to send your feedback. The other main items are Brawlers (a look at the custom minifigure and the various Champions) e Collection (the collection of unlocked components). Partyfinally, it’s the skimpy free play mode. There is also a wide choice for the offline … or four arenas where you can face the eventual AI in the single screw mode. Curtain! 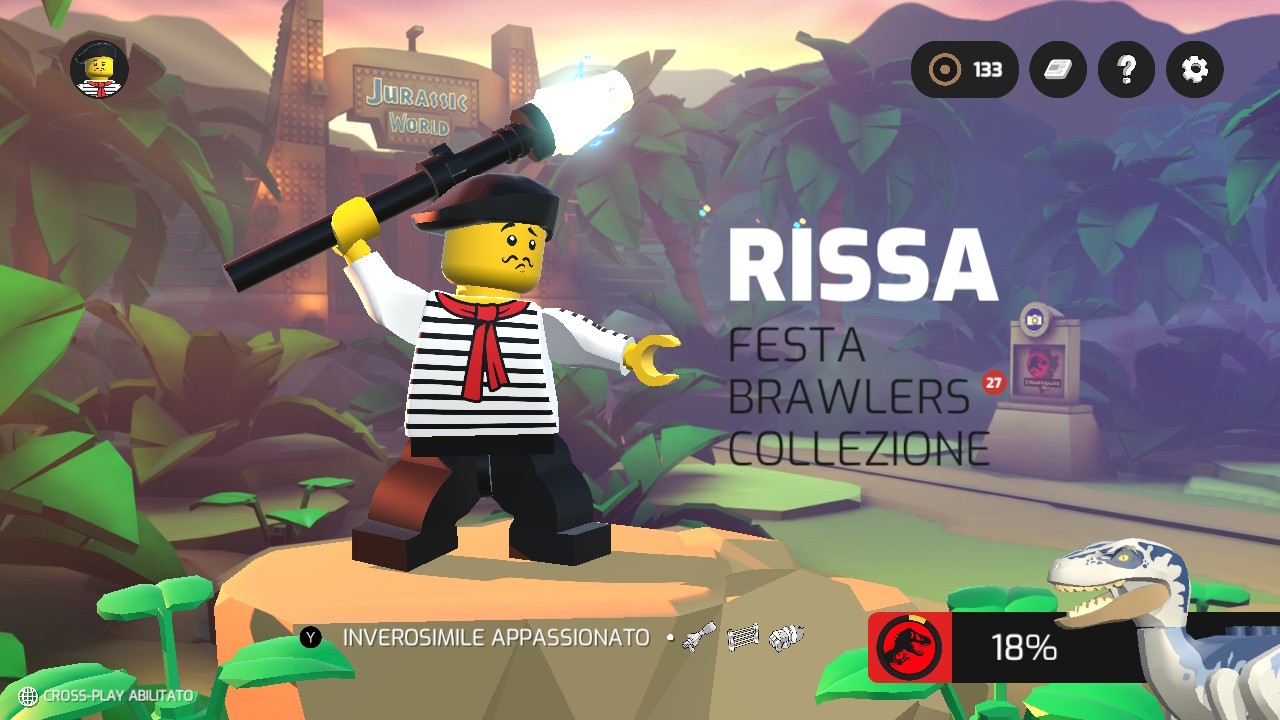 Jurassic yes, but in the wrong sense – LEGO Brawls review

Well yes: we have already come to the technical assessment, starting from graphic sector. 3D models for LEGO aesthetics have had an easy time since LEGO Racers, so it was definitely hard to go wrong here. Difficult, however, certainly does not mean impossible: since the same console can manage LEGO Worlds without too many problems (with rare exceptions), a level design as basic as that of platform fighters has no need for such anonymous backgrounds. Yet, here we are. A praise to the sets represented (from the classic Space to the very recent Hidden Side) we do not deny it, although we see Jurassic World as the only external license it has left us quite dumbfounded.

Mobile gaming anonymity, however, is not so much to see as it is to feel. The sonorous it has no technical problems per se, but we certainly don’t imagine ourselves whistling a soundtrack as sparse as it is repetitive. The same goes for the sound effects: the audio sector as a whole has evidently burned the budget in the undoubtedly most inspired scenario of the whole game, that of the aforementioned Jurassic World. It’s just a shame that this is a brilliant exception inextricably linked to king of the hill clashes, which means you have no hope of playing it except online. If everyone votes for it, of course. 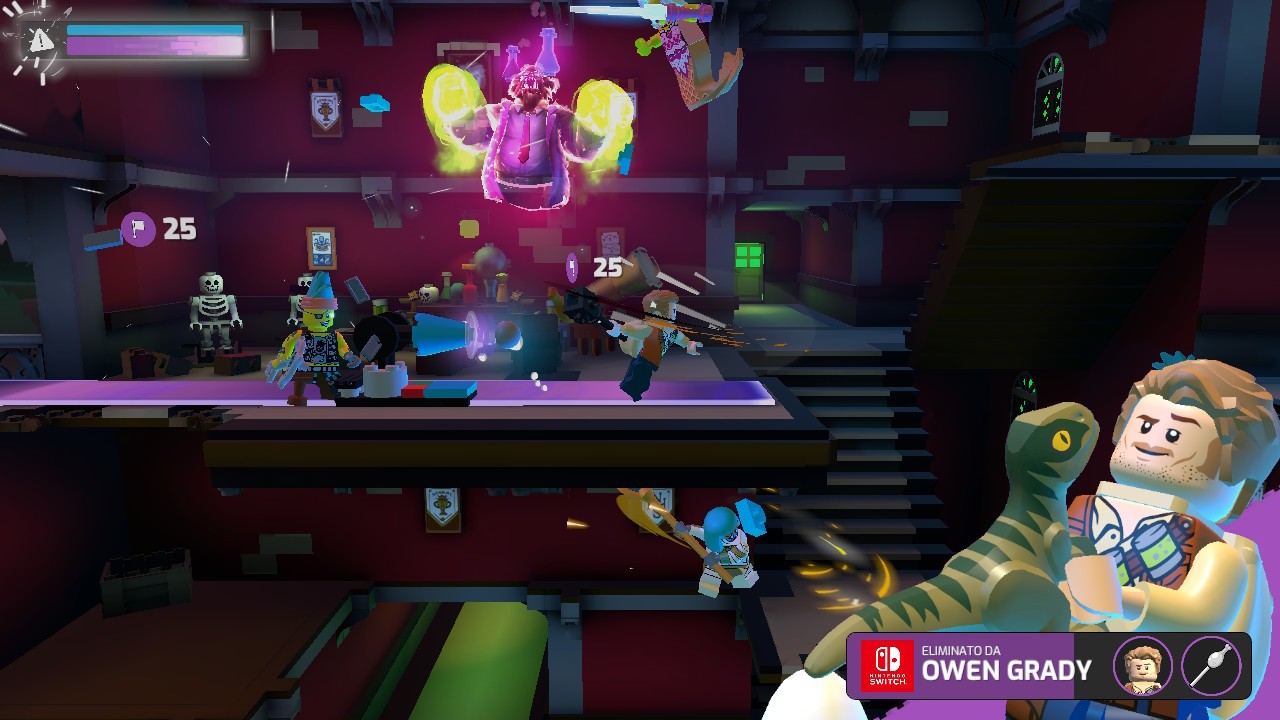 We struggle to think about an empty net goal missed more sensational than LEGO Brawls. The huge potential for the number of eligible IPs for the project was dampened from the start by the greed that saw it debut in the mobile market. We talked (well) about using Jurassic World precisely because this is the kind of game design we would expect from the LEGO response to Super Smash Bros., and it breaks our hearts to see that this is not the case. There is the cross-play but, since the title was mainly conceived for the mobile sector, the gap between the skill required of those who use traditional controls on consoles and that of the rest of the players is excessive.

We could break a few more lances in favor of the game, but there is no “you are political” to stand up to forty euros as an entrance ticket. Hidden contents, beyond the almost lethargic timing to unlock them, in theory come close to justifying a similar price. Unfortunately, everything else is not standing. And this is the main accusation that leads us to point the finger at the game. We have dedicated several guides to Super Smash Bros. Ultimate in hopes of helping to reduce the number of detractors that, in the genre of platform fighters, “everything happens randomly”. But if the imitators show no commitment, these accusations will never cease. Give the reins back to TT Games!