Apple is preparing to launch the new operating system for its computers: macOS 13 is coming is about to arrive, with lots of news. Already at WWDC 2022 at the beginning of June we were able to appreciate some news, such as Stage Manager per il multitasking, Continuity Camera to use your iPhone as a webcam. And then lots of news regarding the apps, between those that are updated and the new ones (finally the dedicated Weather and Clock apps arrive). There are also many new features “under the hood”, Metal 3 to improve gaming on the new chips Silicon and the Rapid Security Response to speed up the installation of security updates.

In short, macOS Ventura has tons of new features to showcase: here’s everything you need to know about the new Apple operating system.

When is the new operating system for Mac and MacBook coming?

At the moment Apple has released cinque beta for developers, who are testing them so that their apps are ready to launch the stable version of the operating system. And Apple has also begun to let users directly try the new macOS, con three public betas already released.

An official date for the stable version of macOS 13 Ventura is not there yet. But it looks like Apple is preparing for a launch fbetween the end of September and the beginning of October, after the release of iOS 16. But very soon anyway.

Compared to the current version of the operating system, macOS Monterey, Apple has shrunk the new of Mac e Compatible MacBooks. An understandable choice, given the increased demands that the hardware will have to manage. But despite this, most Macs purchased in the past five years should be compatible.

To these will undoubtedly be added all the Macs and MacBooks that Apple will announce between now and the end of the year (there should still be some, we will keep you updated).

The news coming to macOS 13 Ventura

Apple is implementing the various innovations of macOS Ventura a little at a time in the beta and it is not certain that it reserves us some surprises before the official release. Both positively and negatively: it may present a new feature and retire another which it judges still needs some work.

But for the moment, here are all the more interesting news to come.

The most macroscopic novelty of this update is undoubtedly Stage Managera new way of interacting for multitasking that is added to Spaces e Mission Control. However, Stage Manager allows you to organize all your apps and windows in one screen, so you can stay focused on the app you are working on, while keeping an eye on all the other tools you might need.

In the center of the display you will find the main app, while the other windows are on the left. With a click you can switch from one to the other, organizing in each window with the apps you prefer in a single group, and personalizing the experience to the maximum. This way you can switch between tasks with all the tools you need at your fingertips.

This feature also arrives on iPads, albeit only on those with the new Apple Silicon chips. 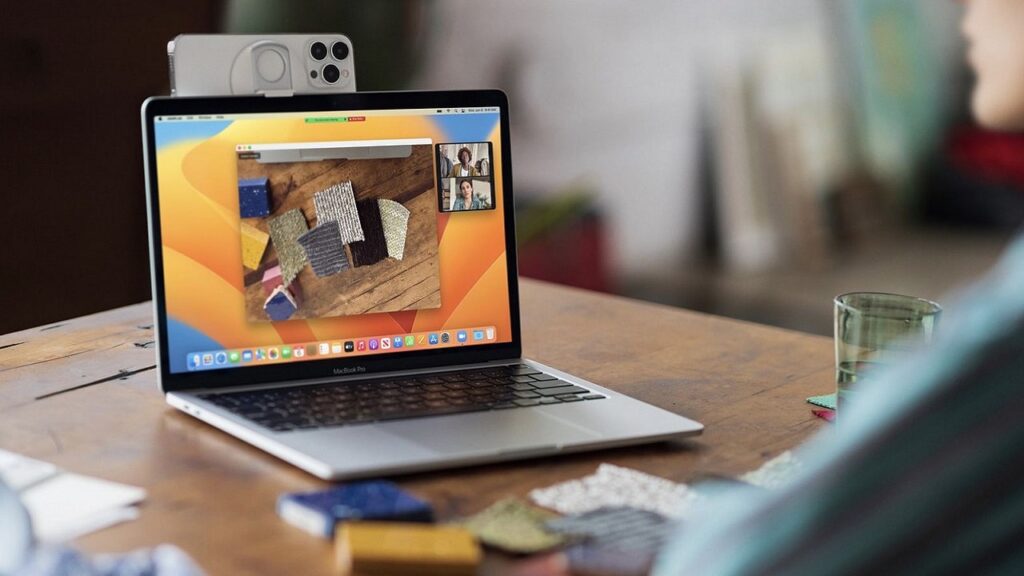 Laptop webcams are getting better and better, especially those on the latest MacBooks. But they are light years from the quality of a dedicated solution. However, Apple has decided to take advantage of the great iPhone cameras to avoid the inconvenience of always having a webcam with you for video calls, thanks to the Continuity Camera.

Using a cable or wirelessly, you can use the cameras on the back of your iPhone as if they were the Mac webcam in any video conferencing app and beyond. Your iPhone can also act as a video camera and there are some interesting features too:

The messages app allows you to change chats that you have sent within fifteen minutes of sending. Within that time you can too retire the message. However, this function (also coming for iOS 16) allows you to edit only the “blue messages”, those to other Apple accounts. It will not work for SMS instead. 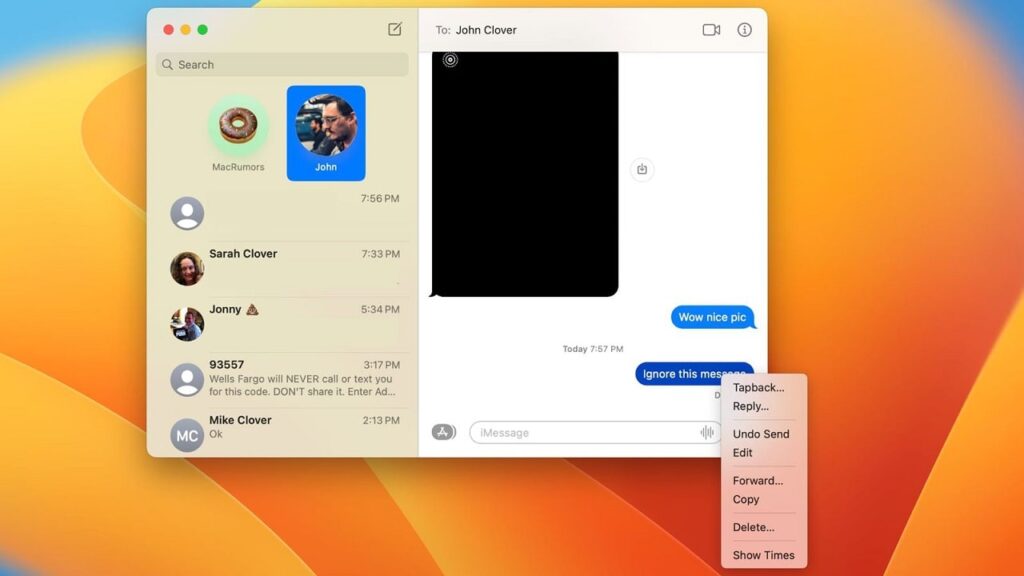 You can also mark as did not read a message that you want to manage later. And if you want, you can activate the feature that allows you to recover deleted messages up to 30 days after deletion.

Finally, too on Messages comes SharePlay, which you can use to chat with friends while watching movies, listening to music or playing in sync with them. A way to communicate even more easily with family and friends.

There are also new ones Memoji, sticker, and many other customizations among the novelties of macOS 13 Ventura.

Also for the email comes the possibility to withdraw them if you have made a mistake, but the time is much tighter: solo 10 secondthe. The possibility of using the “Remind me later” when you don’t want to answer right away.

Searching in the Mail app becomes faster and more accuratewith the ability to correct typos and search for synonyms of the keyword. 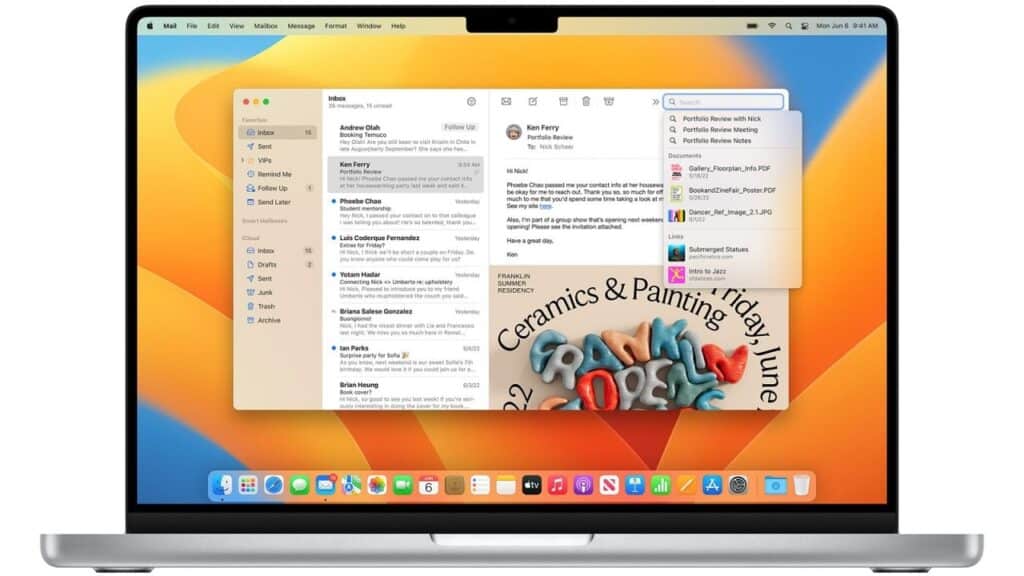 There are also many new features for better email management in macOS Ventura, such as the ability to place an email sent to which you have not received an answer at the top of the inbox, so as to remind you to insist. Or the possibility to report if you have forgotten an attachment or a CC.

Also, Like Messages will support ‘rich’ links, showing you information and context.

After the arrival of Groups for Tabs in Monterey, one of the novelties of macOS Ventura is the Shared tab groups. This way you can collaborate with colleagues or friends, with all components that can add or update cards. 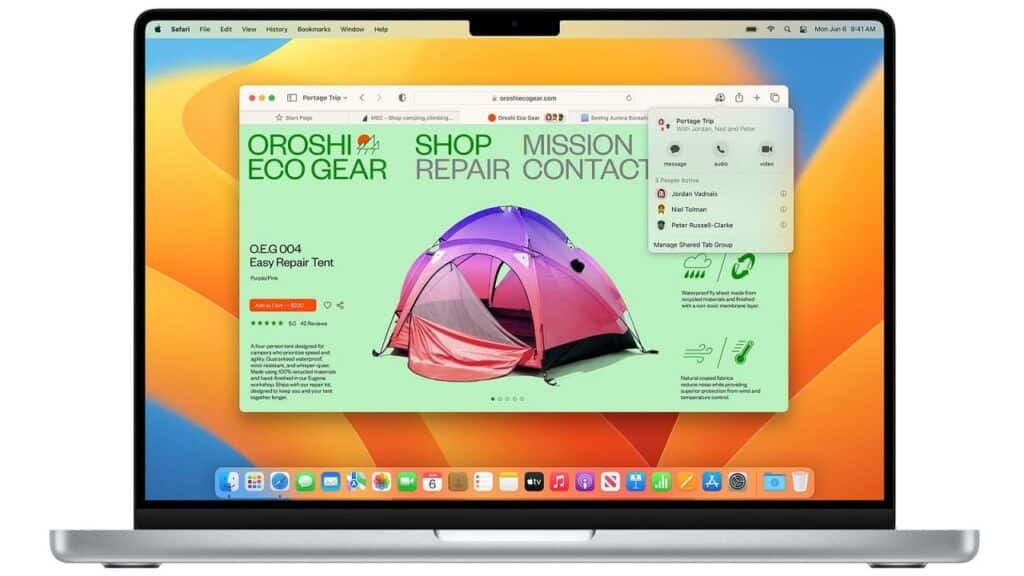 In addition, shared cards now have their own home page, which you can customize as you like. Then there are new API for web extensions, which will allow developers to create new features. Plus, you can share extensions across multiple devices, with page zoom and Auto-Read mode that will sync across your entire account.

There comes the ability to receive notifications from sites, the ability to translate the text of the images with Live Text (as it happens on the iPhone). Finally, greater ability to manage Password in the Network Settings. 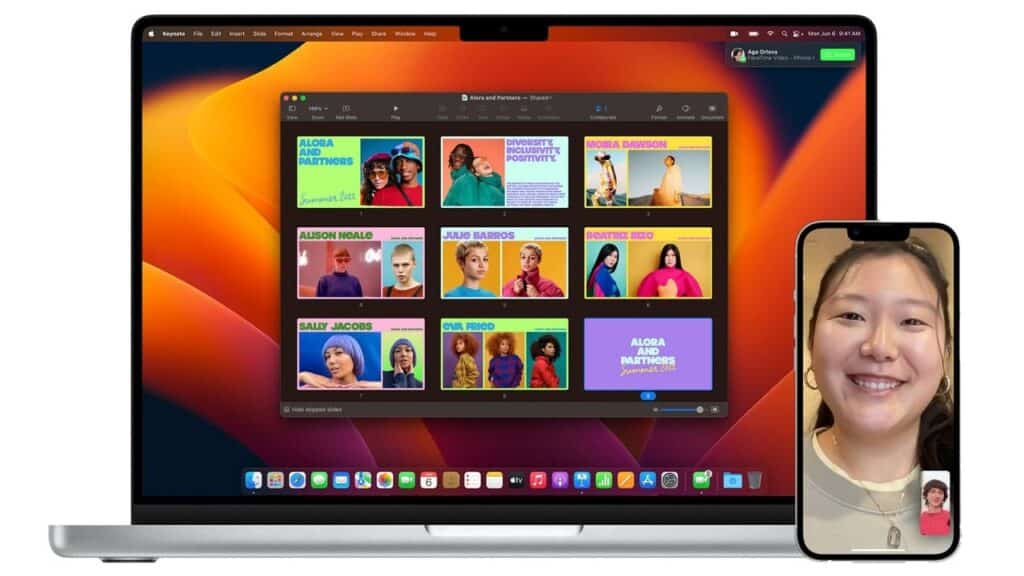 On FaceTime comes the ability to make a HandOff: you can accept the call on your iPhone and then continue it on Mac, or vice versa. Not only will the passage not interrupt the call, but if you are talking via Bluetooth headphones (like a pair of AirPods) will connect to the new device.

Also come the possibilities of collaboration leveraging apps such as File, Notes, Pages, Safari and many more. And if you are using a Mac with Apple Silicon chip, you can also automatically transcribe the call, even attributing the dialogue to the right interlocutor.

With macOS Ventura, if you have two duplicate images in the Photos library, the system recognizes them and merges the duplicated images. You can also browse albums in alphabetical order and changes made on one photograph can be copied and pasted onto another.

There are also options to disable the “Memories”And the photographs shown in the widgets for those who do not appreciate these features. If, on the other hand, you like them, new “Memories” arrive and the possibility of matching songs from Apple Music, if you are a subscriber. Finally, you can access the Hidden and Deleted photos only with password or TouchID. 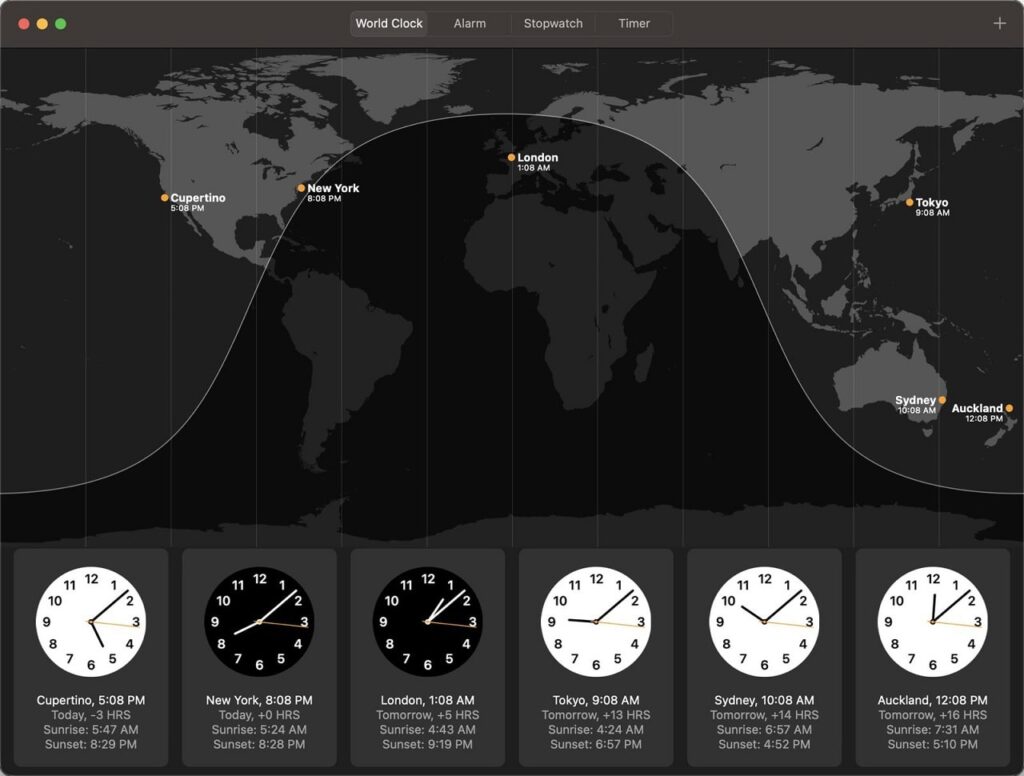 Finally the app Watch seen on iPhone and iPad arrives for Macs. Supports Siri integration to set timers, alarms and to check the time in another city. Also there is the integration for Shortcuts.

It still remains ‘just’ a watch app, but it’s nice to see that Apple has put a lot of effort into making it better and making it consistent with the ecosystem. 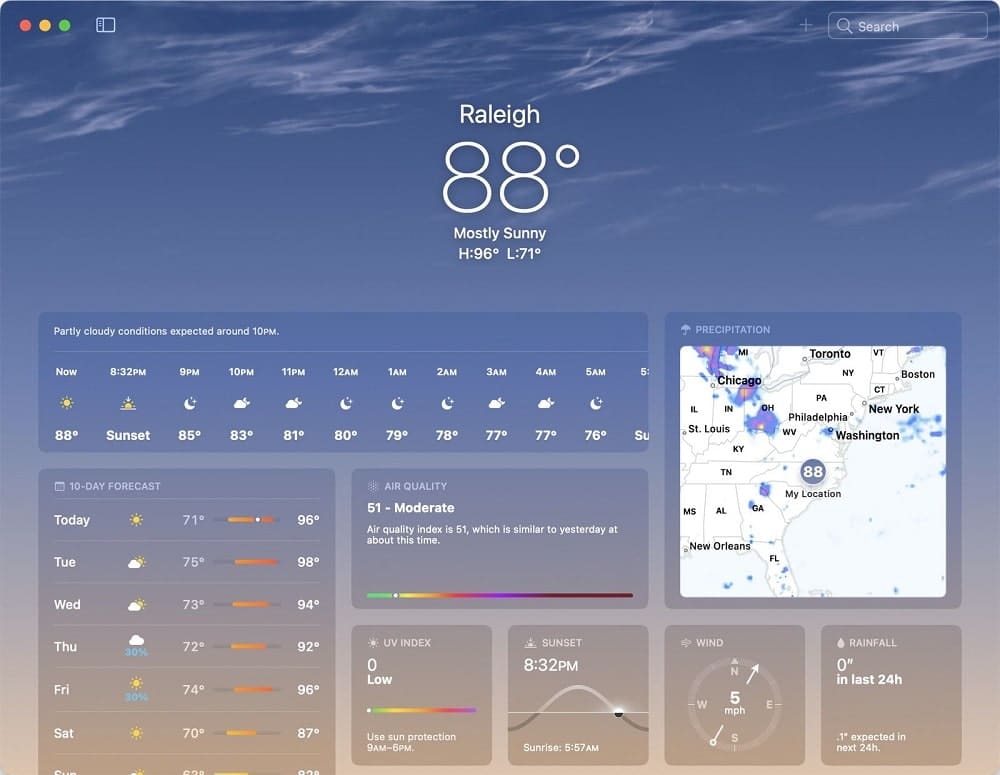 The app also comes from iPhone and iPad Weather forecastanother long-awaited addition by Mac users. Not only is it optimized for the larger display, but it has immersive animationsdetailed maps and clickable forecasts.

Find all the functions of the app for iOS, fromanimated wallpapers that change according to the location up to the detriment of the air quality and the power of the sun’s rays.

The home app has a new design that makes it easier to organize your smart home tools as you see fit. You can indeed see in one single screen all accessories, all the rooms you have programmed. 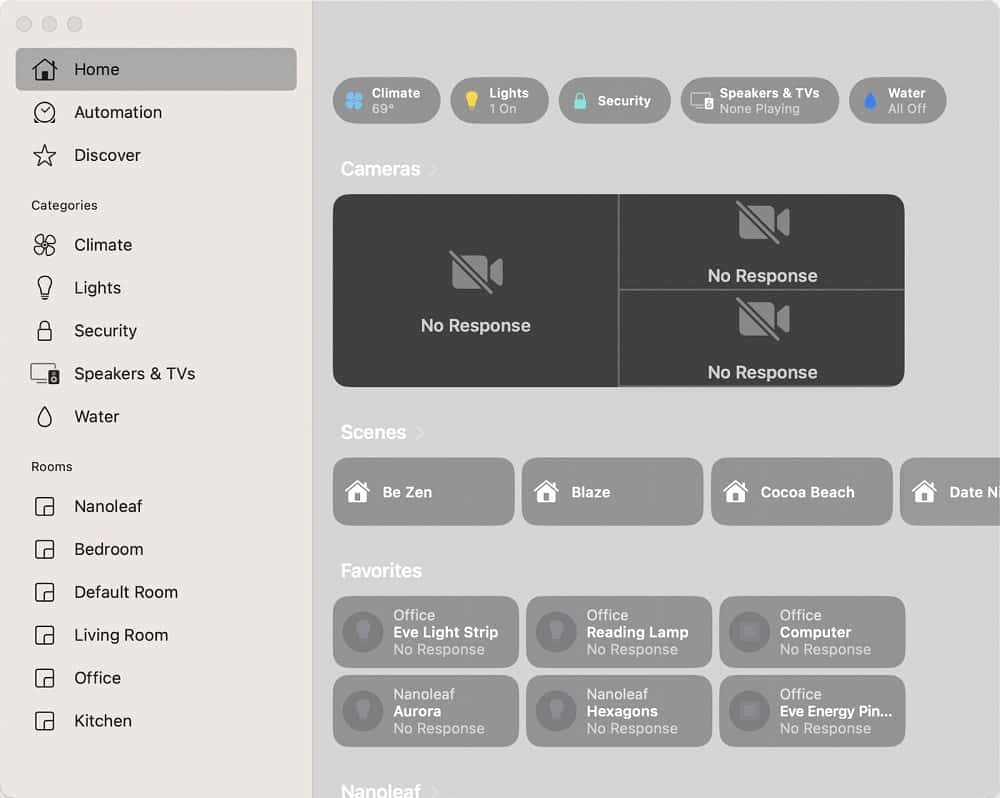 But it also remains an organization for Lights, Air conditioning, Security, Speaker and TV, in order to better manage every feature for the smart home. The Home app in macOS Ventura takes advantage of Matterthe standard achieved together with Google, Samsung and …