Between sand rolls and live bait (briefly), find out in our review if Maneater for Nintendo Switch is… banned or not

The arrival of Maneater its Nintendo Switch reminded us, in the process of review, which is not always necessary to wait before diving in after eating. Indeed, you can only emerge to eat (someone) and then immediately return to the water. It is not that human deaths by the hand … fin … indeed, shark teeth are so common, far from it: we are more of the rest of us glaring at the sharks. And that’s how it is Tripwire Interactive he asked himself a question: if we gave players the opportunity to raise a shark as a champion of his fellow men, to the detriment of some tourists? Port Clovis he is waiting for nothing but us.

The seaside town, after all, is a bit the opposite of an all-you-can-eat (no, not Overcooked!), In which raw fish is get fed with diners (where “with” does not mean in their company). The action is raw, but the question for your fine palate (from “fin”, fin) is only one: will the gameplay be cooked to perfection, or is the human flesh on the buffet too rare? Well, rare will certainly be, but you know where our metaphor is headed. So get ready: very red waters await us, whether it’s sunset or sunrise. Below with the creepy two-note melody!

Me, mammeta and the bayou

Let’s be clear, before going further into the review: the Maneater sharks, even in the “small” Nintendo Switch version, are certainly not as cute as the Pokémon Sharpedo, nor (for the elderly) as the Squalibabà of the surprises in the chocolate eggs. But not even the shark hunter who acts as our nemesis, Pierre LeBlanc or Pete the scaled for the few friends, he is a very recommendable type. All this takes place with a framing device that makes the narrative of the game a waste of DMAX programming, in which the hunt for (and) sharks is a very popular sport / docu-reality.

Narrator Trip Westhaven, voiced by Chris Parnell (Jerry Smith in Rick & Morty) makes no secret of how Porto Clovis is a jumble of negative stereotypes about the American midwest, mixed with degradation and pollution capable of making the world of Final Fantasy VII seem modest. It’s about a revenge of nature on parasitic humanity, which after the tutorial in which we take possession of the mother of the protagonist shark (later subject to a fatal caesarean by Pete the scaly, and then abandon the premature puppy in a stagnant bayou) suddenly becomes much more personal . 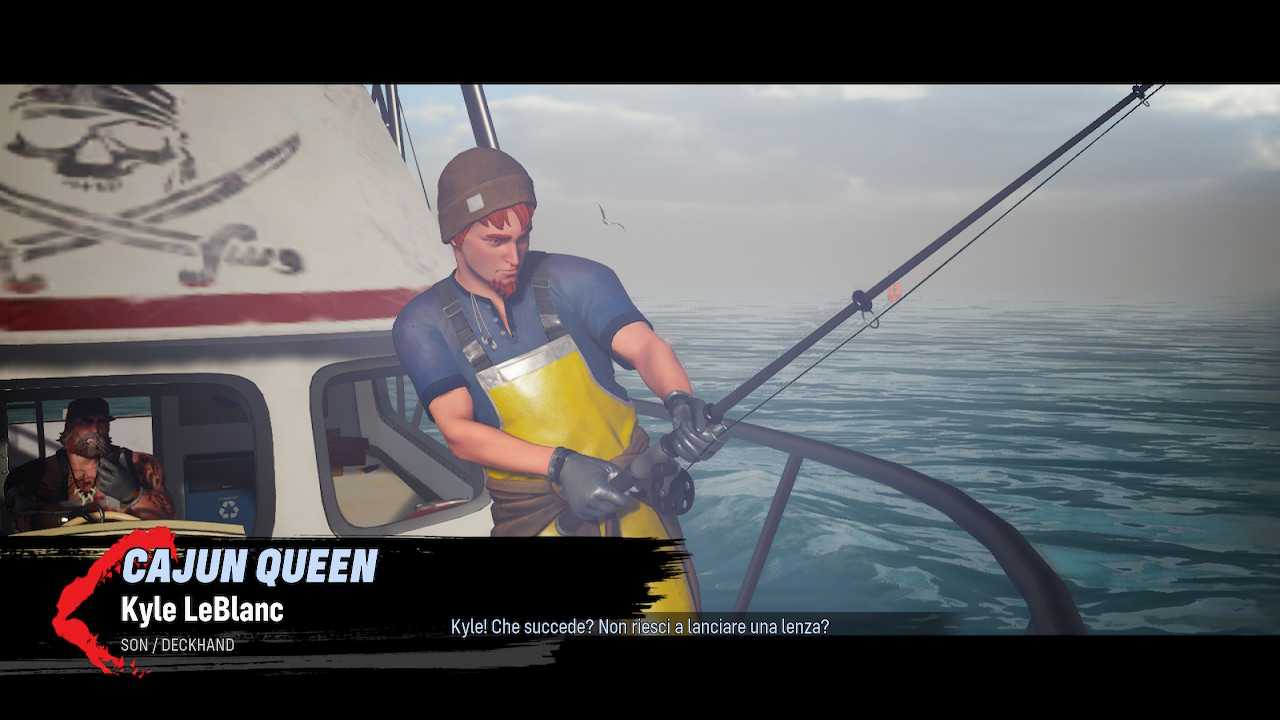 In the early stages of the game, Maneater forced us to learn the rudiments of commands in the last hour of life as a mother shark, and then deprive us of many skills once we took the reins of the puppy. The result never fails to demonstrate how even a shark must make its way among predators, especially as a child. The basics of the gameplay are simple: i commands they allow us to shoot, dodge, jump out of the water (more like dolphins than sharks, but there is no shortage of artistic licenses in terms of fish and the ever-present narrator often points this out), poke from the tail and, of course , bite.

In practice, however, the mechanics are not limited to this. The structure from Role playing game (despite the at least contemporary setting) implies that devouring other sea creatures does not return us only the very useful life points; we will also get materials e experience points, for a maximum total of thirty levels. Each of the areas of the game world boasts one cave in which to return to lick our wounds when we are overwhelmed by enemies (and, in the case of alligators, it also happens quite often), as well as equip upgrades such as the most disparate mutations. 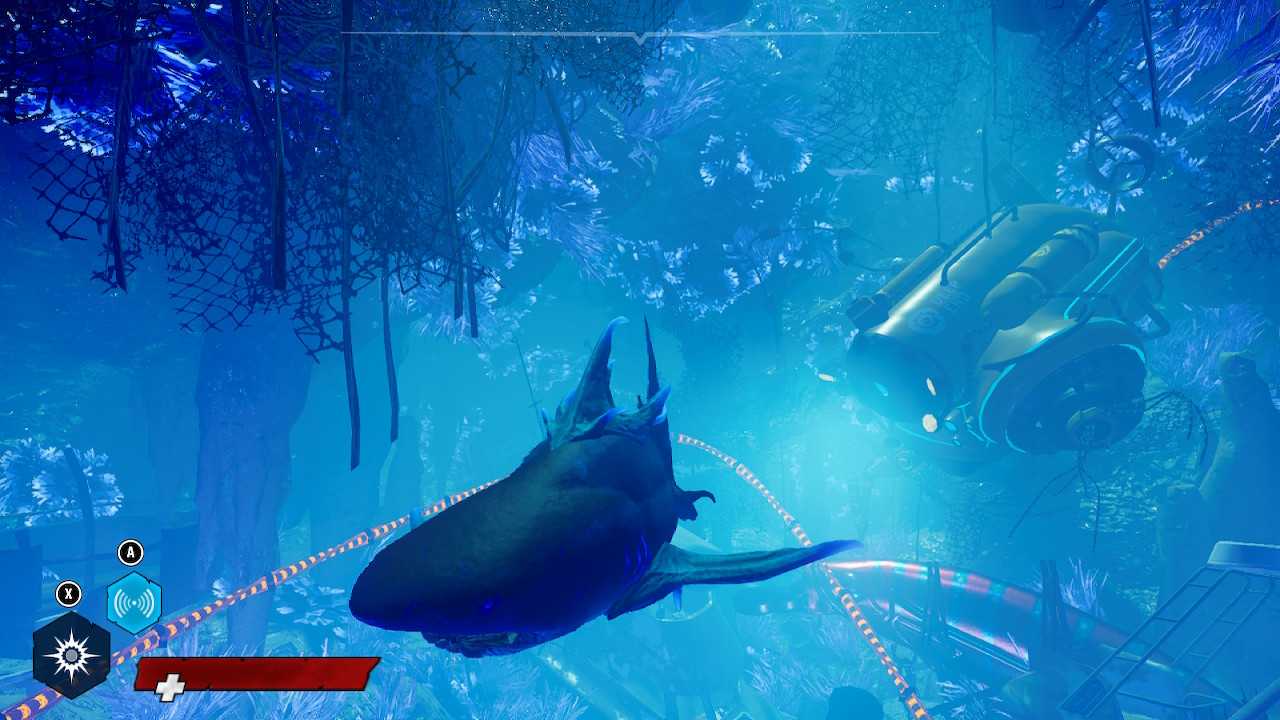 Once out of the bayou, the first humans of Maneater also begin to appear outside the prologue: during the review phase, we were able to see a mechanic that, on Nintendo Switch, in the absence of a port, very little is seen. We allude to the concept of “danger”With which we can be hunted, almost identical to the stars of Grand Theft Auto. Not that tourists shine for self-defense skills, of course, but indulging in gluttony can also lead to attracting the (unwanted) attention of shark hunters, or enthusiasts armed with boats and… well, weapons.

Shark hunting is already a gray area by default, but we face something in the game world that even the NRA would find exaggerated. Once the huntersAs we progress through the game we will see them use not only rifles, but also explosives. Our survival skills will be rewarded with a fight with a special boss, which in a similar way to the army of Grand Theft Auto will prove to be particularly difficult. Unlike GTA, however, emerging victorious from clashes with expert hunters will reward us with a greater “degree of infamy”, as well as with upgrades. 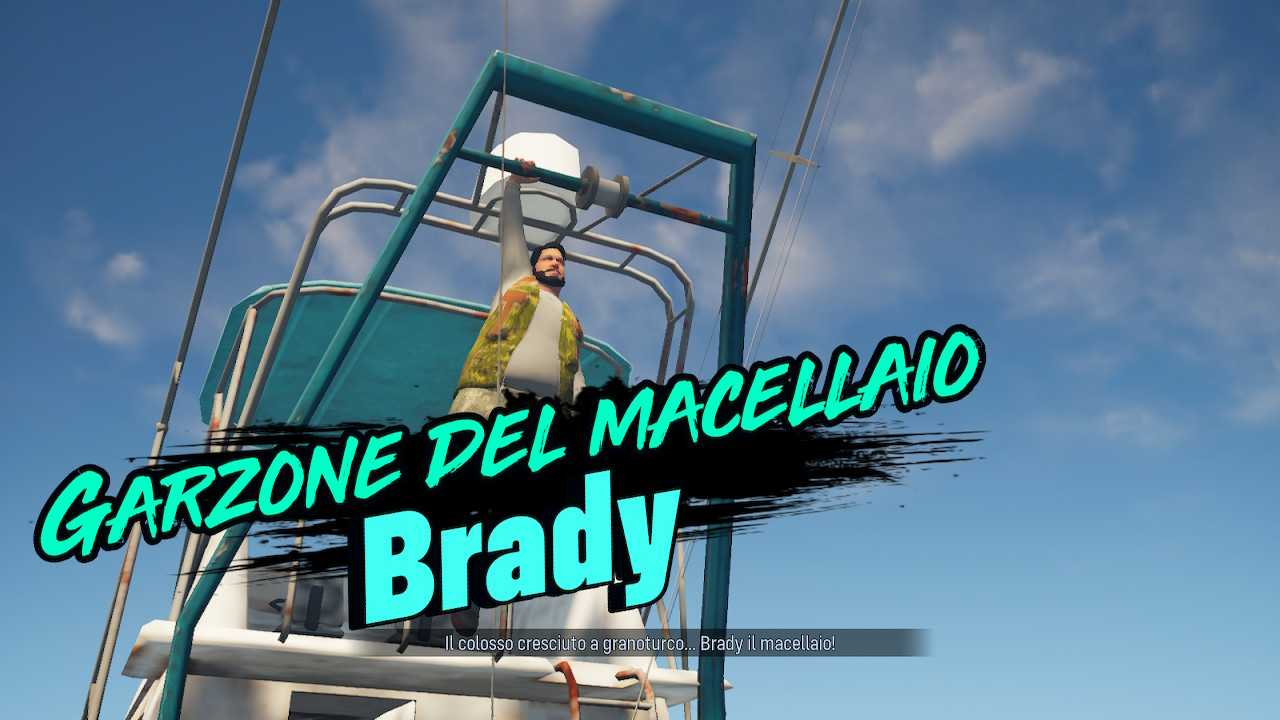 Implausible even without Tera Reid – Maneater review for Nintendo Switch

In a normal RPG, our equipment consists of swords and armor, but here we are in Maneater: our most powerful weapons consist of actual parts of the body. “Bioelectric” teeth, adrenal (and surreal) glands, other power-ups with which to manage the time available out of the water (in a bizarre inversion of drowning mechanics), etc. upgradeable with the materials obtained. The end result hardly resembles anything even vaguely plausible in nature, but it certainly does not lack charm and / or impact. However, it’s not just the hunters who are giving us new power-ups.

Also superpredatori, or “boss versions” of animals already faced elsewhere, make their appearance as we complete the various missions. Pikes, barracudas, alligators, mako sharks and so on: these opponents will give us a lot of trouble, but in the absence of traditional “shops” in which to obtain our new prostheses we have no alternatives. Empowering ourselves also helps us outside of our battle prowess, given the existence of abilities like the sonar, which helps us identify the many junk scattered around the game map. Sharks also have a hobby of collecting! 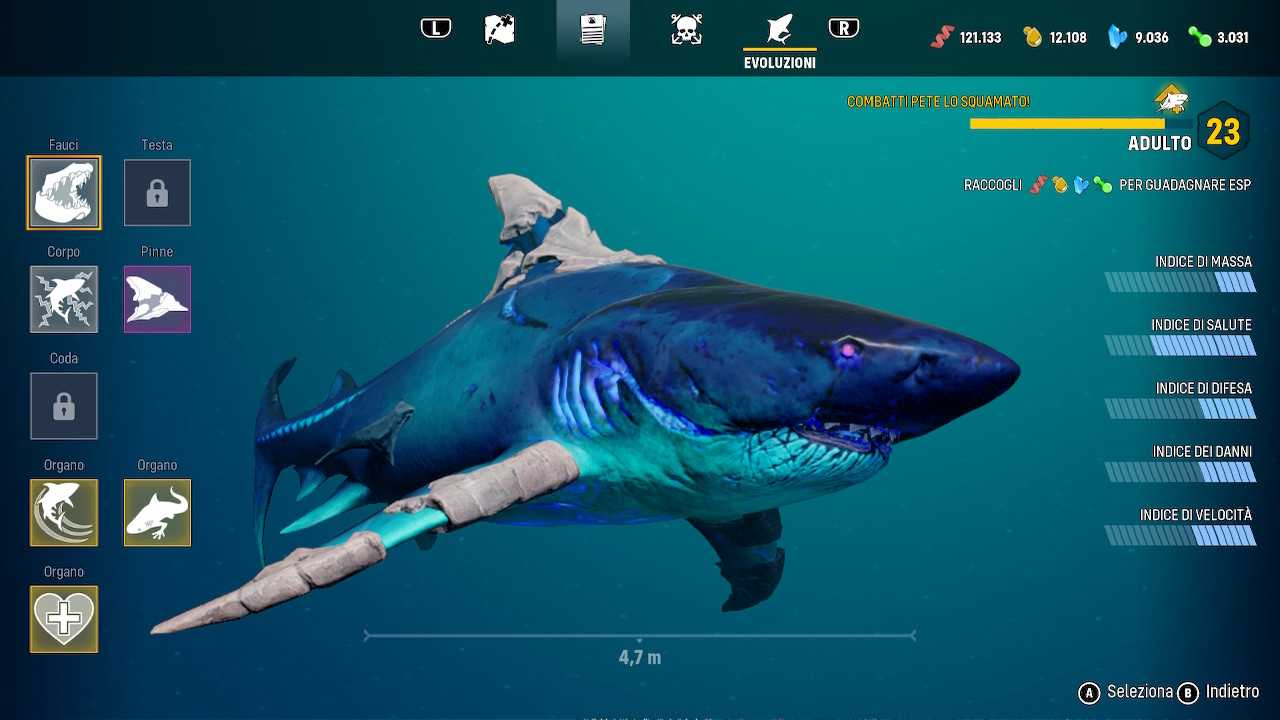 The map of Maneater brings with it an enormous amount of items to collect, and in the review phase we at least got to bring 100% some areas on Nintendo Switch. Reaching the cave of a new area, the equivalent of a Pokémon center to be reached in Flight (or a “Ubisoft tower” if we really want to use that term) is only the first of the things to do. There are “collectible” points of interest by destroying the appropriate signs, crates of nutrients that have ended up in the water, tags suspended in the air (a lot in the air) and, most importantly, a myriad of side quests.

Many of the missions they are exiled in fact from the main story (a Moby Dick in a modern key, with emphasis on “dick” for human characters), and they ask us more than anything else to kill a certain number of prey united by the species they belong to and where we can find them . Fortunately for us, the map always helps us pinpoint where we can complete a mission, and if we’re particularly patient, the sonar does the rest for the collectibles. All right then? Well, there are some little things that made us turn up our noses, actually. 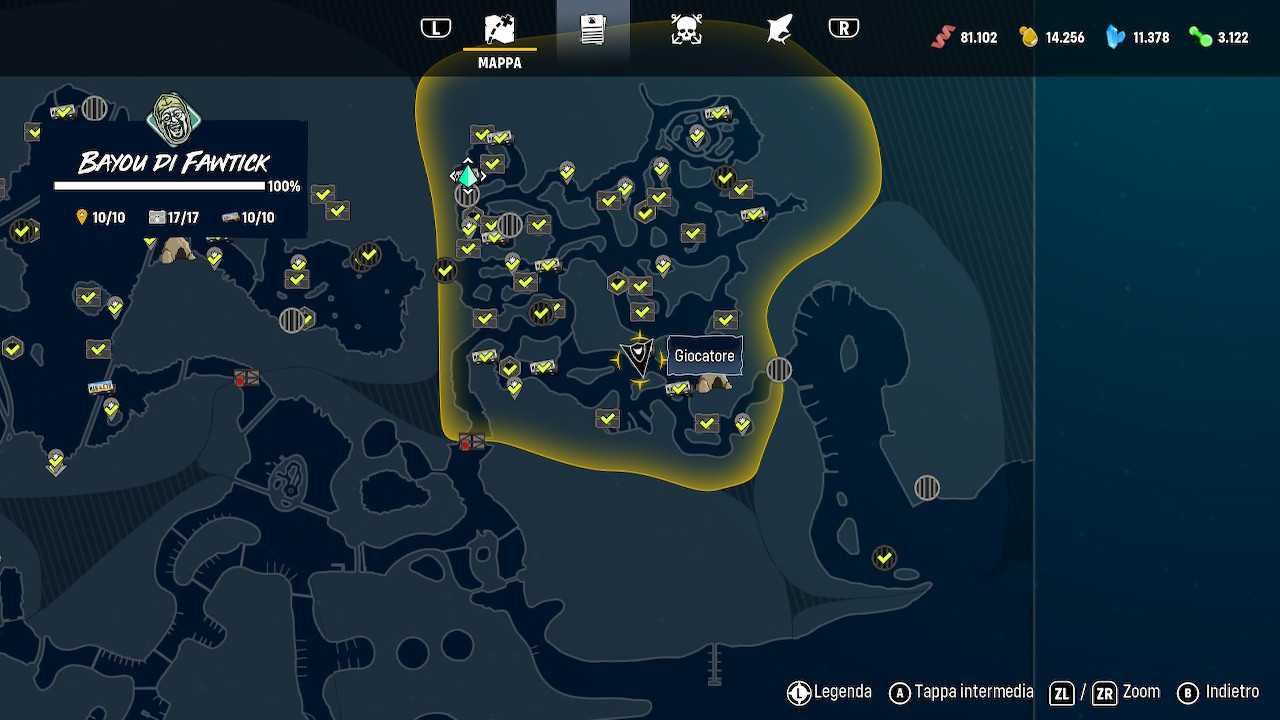 Between The Shark and Sharknado – Maneater Review for Nintendo Switch

We summarize at this stage of the review all the criticisms for Maneater. First of all, as we note below, there are points where the graphics engine Starts. The drops in framerate are rare, but for this reason they are more noticeable, especially in the most excited phases in which hunters force us to dodge the improbable. Similarly, the combat sometimes it can turn out imprecise, between a camera not always accustomed to collaboration and a dodge mechanic that often turns out to be a leap in the dark. Plus, as you will see below, there are points where the texture they seem to show a surface to swim in when in fact it is land.

We would also like to say a few words about location, where the same framerate problem arises: excellent everywhere, except where it fails. We allude to negligible trifles, such as the objects to be collected in the Lake of the Dead Horse mistakenly attributed to the bayou at the beginning of the game, but also to serious shortcomings. Some of the upgrades obtainable, in fact, demonstrate a complete forgetfulness in the translation into our local language, as you can see below. Finally, the side quests can be repetitive; however, given the hefty rewards for a completism never an end in itself, we can turn a blind eye. In short, there is not much to throw into the sea. 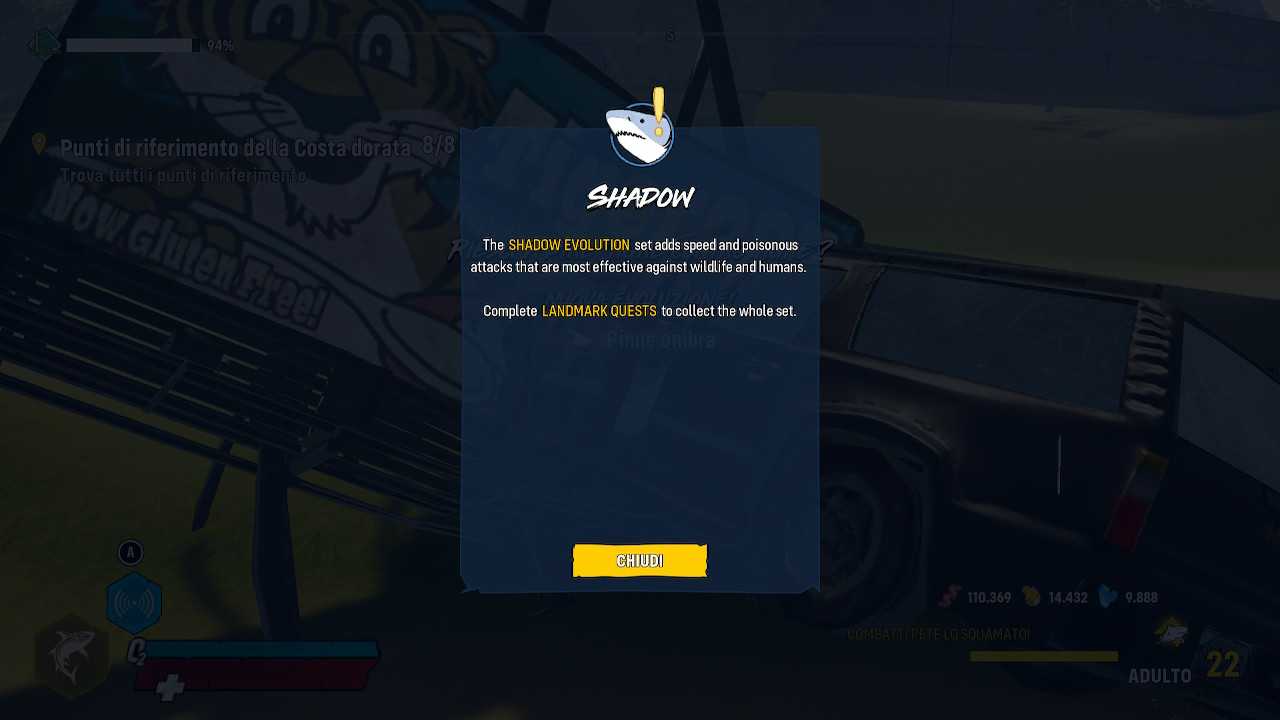 How is Maneater doing in the review phase on Nintendo Switch? The answer is more positive than you might think. Sure, a hint of aesthetics “Early 2000’s PC game style” (if you remember the Monster Jam: Steel Titans 2 review) is always there. But there is a necessary “but”: contrary to what the sobbing logos before the title screen may lead you to suppose, in reality the framerate is often stable with very few compromises. There is no shortage of smudges, among excessively dark ravines and, as we alluded to, fraudulent textures in their “humidity” even on the mainland (image below).

Little to complain, however, for the sound. The soundtrack remains relatively “sui generis”, but the narrator he holds up almost the entire hut. Chris Parnell is in great shape, and his stinging sarcasm (almost a passive-aggressive version of Jerry Smith) turns almost every moment of the game into pure gold. This also includes game overs, except when they are frequent enough to cause clips to repeat themselves. Dignified the performance of the rest of the cast, too, although the plot of paternal acceptance between Kyle LeBlanc and his father Pete the scaly is trite regardless of any dub. 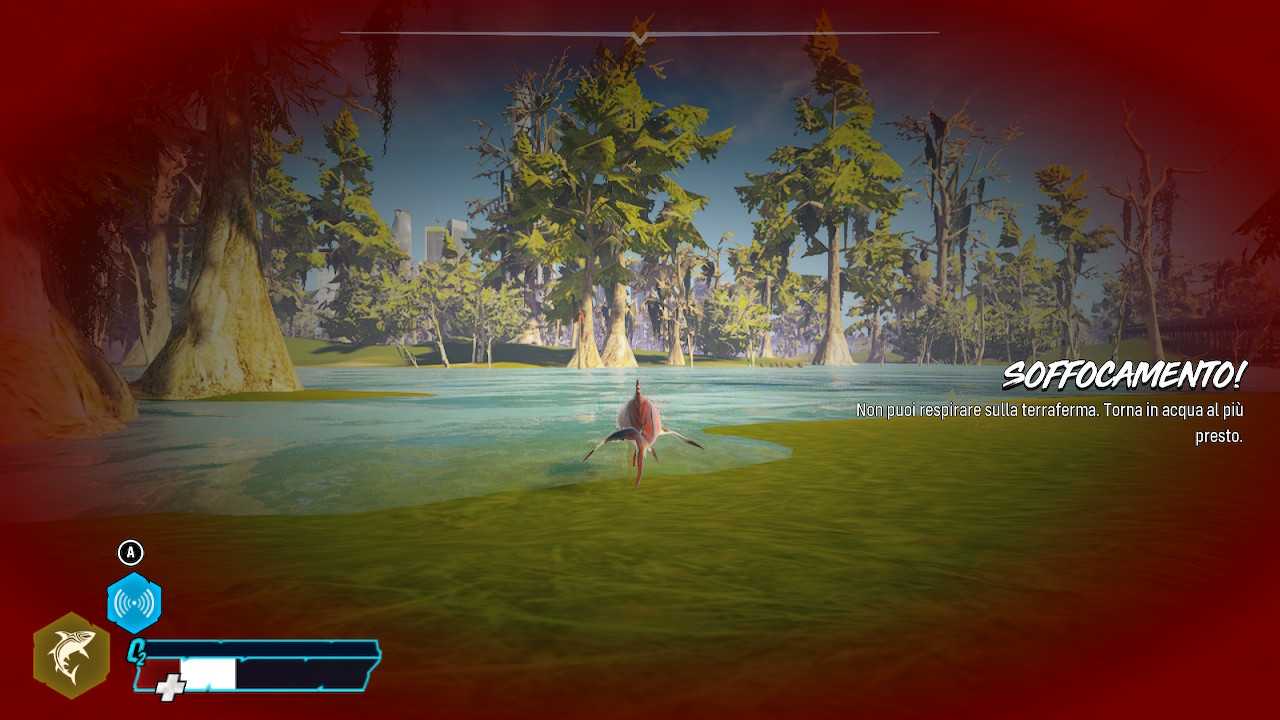 Maneater it’s not the perfect title, although there is no review of a game that is. Nonetheless, for what the title aims to do (and, let’s face it, living as a sea creature is niche material) the result is surprisingly competent. Once you get involved in the world of Porto Clovis, it is difficult to part with a light heart from this bay of outcasts. The backtracking there is, but rationalizing the layered structure with the growth of the shark itself can worthily justify every occasion in which a grate requires the teeth of an adult (or, sometimes, elderly) predator.