Mario Golf Super Rush is the latest exclusive to land on Nintendo Switch after the release of New Pokémon Snap e Mythopia. In this new title we will find ourselves again in the Kingdom of Mushrooms, but this time we should make our way to the sound of par and birdie to win the title of best golfer. But how did the title behave in our hands? To find out we just have to start this Mario Golf Super Rush review.

An adventure with a tutorial flavor

One of the modalities of this title is precisely theGolf Adventure. Here we will select one of the THOUSAND present on our Switch – or in case we will create another one – and we will begin our journey to become the best golfers ever. The road that separates us from our goal, however, is not as simple as one might expect. Along our way we will have to face different challenges in completely different regions from each other, with various obstacles ready to hinder our path. But let’s take a step back and calmly see this mode.

As can be seen from the subtitle, this adventure is nothing more than a huge tutorial, but not only for learn the basics of the game and, thanks to some tricks and tips forts, refine our technique to know how to adapt to any eventuality. Although it is necessary, at least in the early stages, to understand how to hit a ball and the basic mechanics afterwards training zones will be optional choices that the player can also jump.

We will therefore not be obliged to put up with a tutorial with tests that never end or that affect our path little or nothing, but doing them will provide us with considerable advantages. In addition to the various tips, in fact, every time we complete a challenge we will be provided with experience points and coins. The first will be important to level up so as to further enhance our Mii; the latter, on the other hand, will guarantee us the possibility of buying useful equipment during our journey.

This adventure is therefore divided into areas that can be explored freely – which will allow us to talk to NPCs, buy equipment and train – e areas dedicated to competitions. Each of these will be characterized by a particular climate and atmospheric effects, and not only, typical of the region in which they are located. In total we have five regions. To progress between one and the other we will need raise our level as a golfer.

There are six levels in total, including the initial one. Going up from level to level will not be easy because we will have to first pass all the tests of each region that the developers have come up with for us. Once completed we will be able to head to the new region and unlock the new challenges thanks to a higher golfer level. However, don’t expect simple rounds of golf. As mentioned, each region will be different and in each one we will live unique experiences.

The main modality that will characterize the whole path is the Speed Golf. In this mode we will have to complete each hole before our opponents and before time runs out. However, each location will have particular rules that will vary our approach and unexpected events, mainly linked to the climate of the area, which will make our journey even more turbulent.

Despite this “routine”, the Golf Adventure reserve a great surprise from the flavor “mystical”If we can say so. However, in this review on Mario Golf Super Rush we will not go into detail to avoid spoilers. But know that this fold in the course of our ascent to the title of best golfer we liked it and not a little, thus preventing everything from becoming too monotonous. 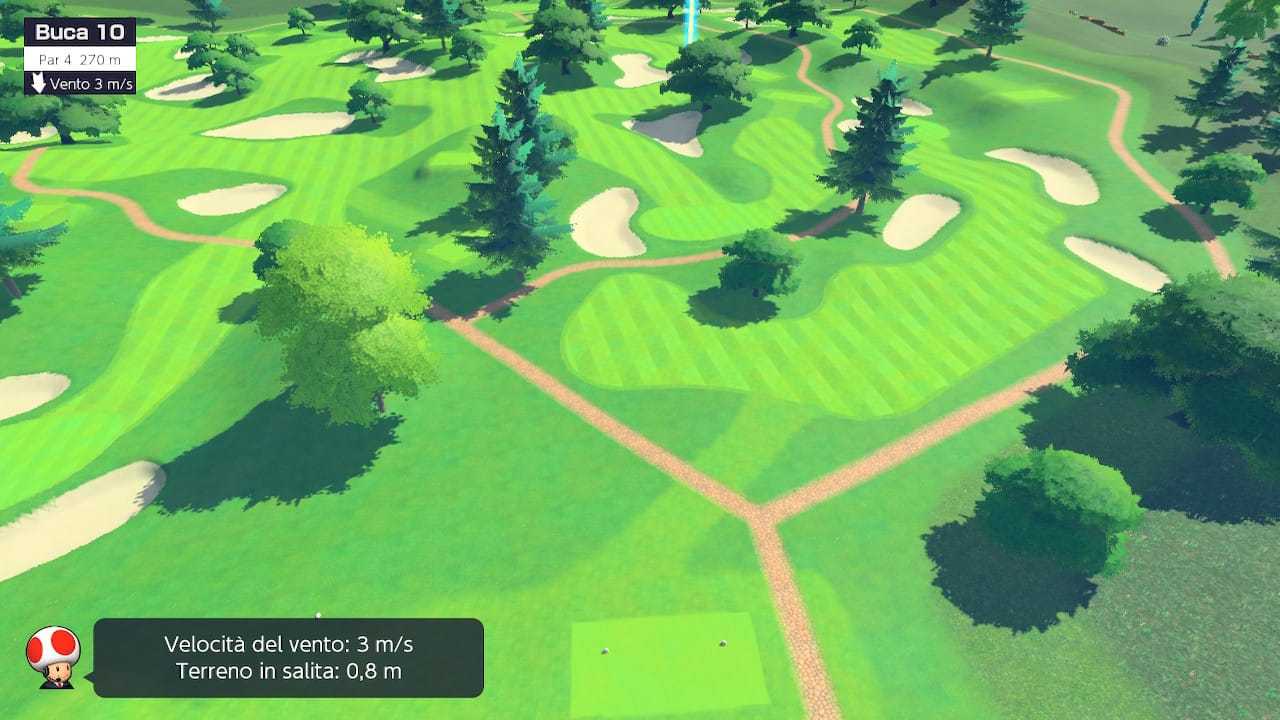 Separate section regarding this Mario Golf Super Rush review is related to game mechanics and the layout of the controls. While it may seem like a fairly arcade title in some respects, the processing in the gameplay was well done by the developers. This elaboration has almost turned into a “simulation”, let us pass the term, real golf.

All this obviously spilled over to well managed commands that allow us to calibrate our shot in every detail. From view from above which allows us to observe the playing field, al rangefinder which guarantees us an in-depth knowledge of the terrain, everything has been made really simple without compromising the gameplay. It will be possible to make any kind of shot, from the most trivial to the most unrealistic, without having to lose your head, but still making the game interesting without making it trivial.

But for those who want a more “realistic” experience? Obviously, in addition to the commands called “Buttons“, Which in fact take place entirely with the various keys of our Switch, the game is also equipped with”Movement commands”That have characterized Nintendo consoles so much over the years. The possibility of swing in front of the television, making his ball fly away, is certainly one of the strengths that have distinguished these types of titles.

Although not properly calibrated to the best from this point of view, the game can offer a much more important level of entertainment. In this way every game against friends can be more balanced and you won’t need to know all the game mechanics in depth. In this way all the various handicaps are then reset that could afflict those who do not hold the title every day. 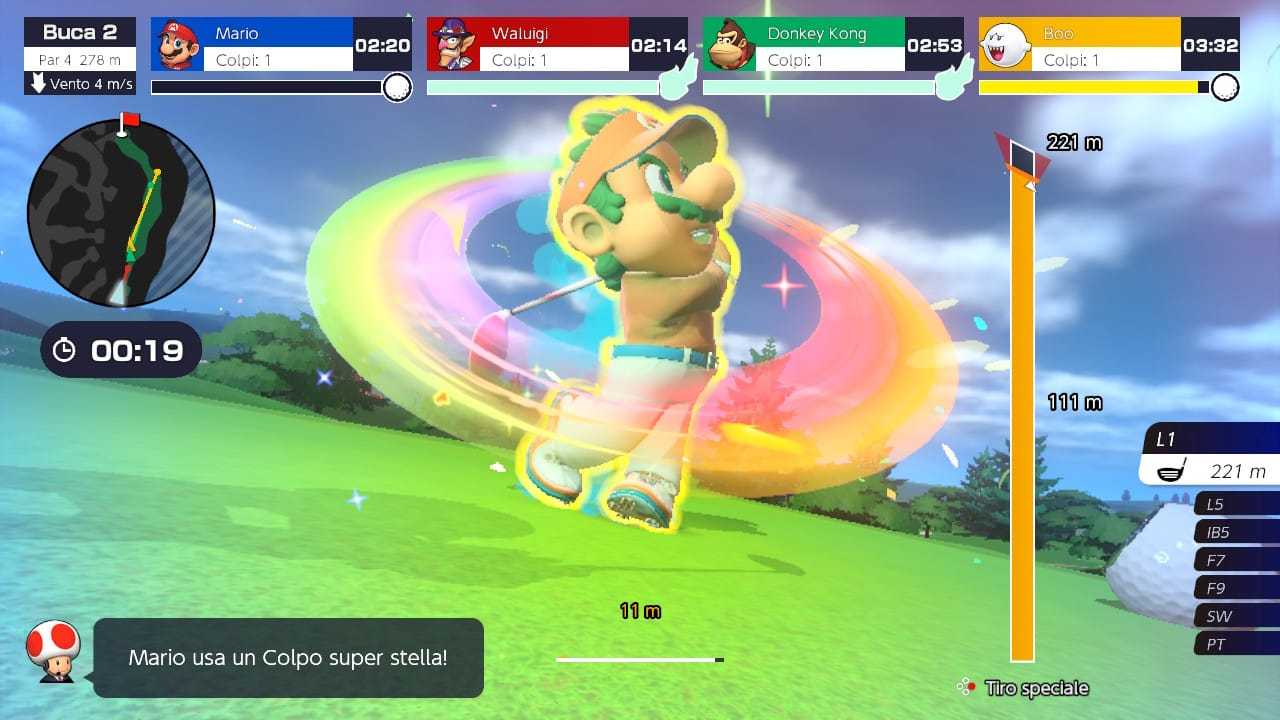 Very important are the various types of races present in the game. In addition to a normal challenge, in Mario Golf Super Rush we find two modes named respectively Speed Golf e Golf battle. Here, in addition to the AI, we can face various challenges against our friends, all by simply using the Joy-Con as clubs or with the “button” controls. But let’s go in order and take a closer look at these modalities.

Speed ​​Golf, as the name suggests, is a race based on “speed“. Our goal will be to get in the hole before our opponents and using the fewest hits possible. Although the stroke score is not taken into account, as is the case with the Golf Standard, it is not recommended to perform many shots why each of these will add 30 seconds to the total of the time taken.

In short, losing a few seconds during the shot to execute it perfectly is certainly better than having to shoot twice because of a not exactly optimal shot. This mode in turn is divided into two types of challenges. The first is one points challenge in which the player with the highest score wins. Points will be awarded for each hole based on the final result and in the end who will have more will be the champion.

The second, on the other hand, simply provides a sum of the various times used for each hole. The winner will obviously be the one who will have taken the shortest time to complete the entire course. 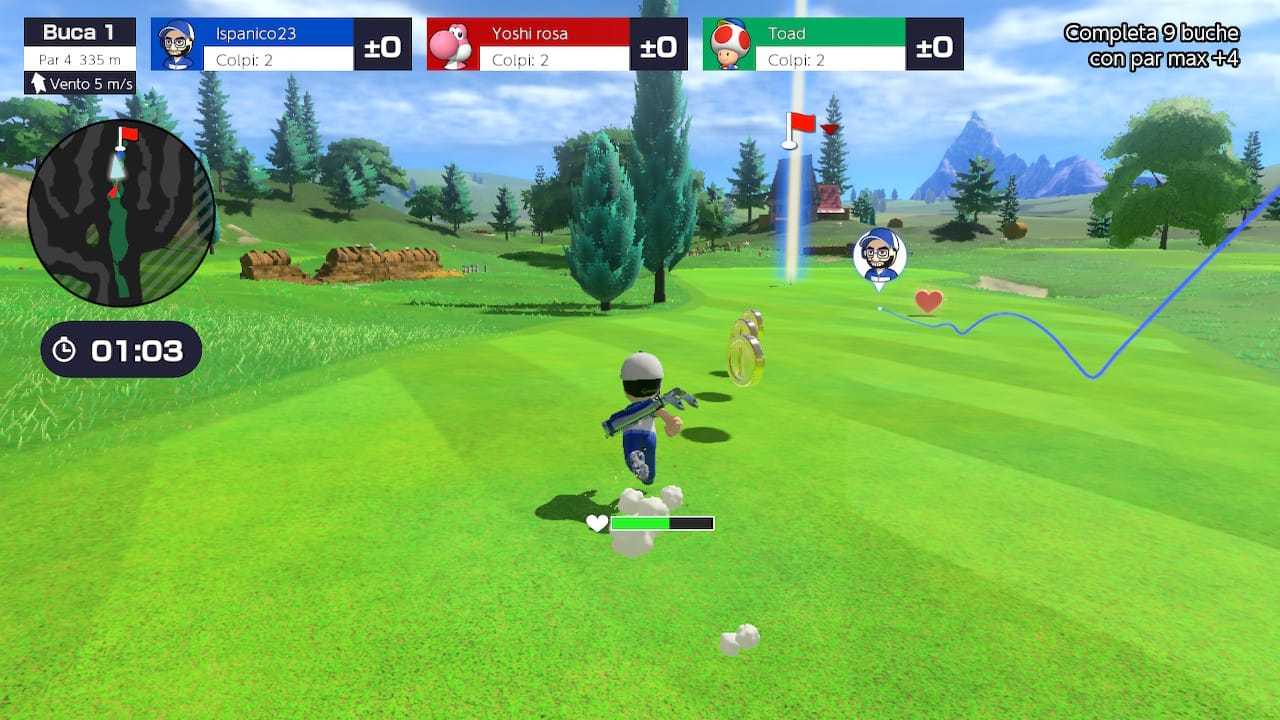 The third and final modality instead we can appreciate it right from the initial trailer. This particular challenge will indeed pit us against other players and the winner will be the one who will take home more holes than the opponents. Therefore, considering a total of four participants, the winner will be the one who wins three holes first. This challenge as well as the previous one will be divided into two modes. In the first we will face a more linear and simple path, while the second will put everyone’s skills to the test.

Moreover, in each one it will be possible decide if events will be triggered with a countdown – and then predict when they will happen – the randomly, making everything even more complex and chaotic. In short, a really tough challenge that will put our golfing knowledge to the test.

In these two modes, contrary to what happens during Golf Standard matches, we players will have to approach the ball after each shot. However, covering a long distance is not immediate, but it comes to our aid special shot. This particular skill, different for each of the 16 playable characters, will allow us not only to cover a greater distance in a shorter amount of time, but also to hit our opponents making them lose precious seconds and move their balls from where they stopped.

The special shot, a technique that will allow our ball to travel very far without having to worry about obstacles and so on. These too will be different from character to character and will also be useful for hitting opponents and balls, making them fly away again. 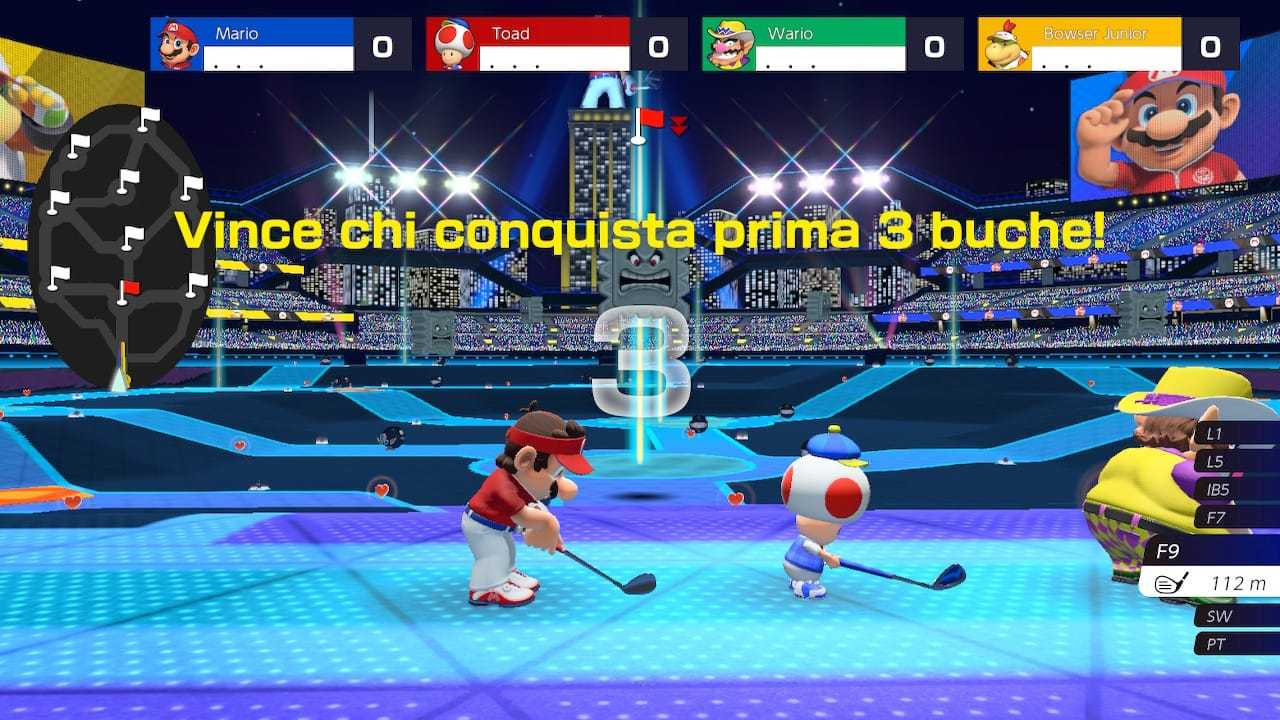 We have now reached the end of this review on Mario Golf Super Rush and it is therefore time to draw some conclusions. The game presents itself well structured like any title in the Super Mario saga. The strength of Nintendo is the ability to offer games “from the sofa”And once again they have managed to create a video game worthy of the name that will surely unleash intense family struggles to determine who is the best golfer.

The Speed ​​Golf and Battle Golf modes they add a little salt and that pinch of panache that doesn’t hurt, away from the usual golf games and imparting that nintendoso flavor to never tire the owners. Both the gameplay and the controls are handled really well and the ability to play by simulating the various swings is certainly an important piece on which the club knows it can count thanks to years of experience.

The Golf Adventure was very welcome, in which we will find ourselves playing the role of a budding golfer ready to become a legend of this sport and more. The idea of ​​inserting the tutorial in this mode was very good, allowing us to learn the mechanics while progressing through the story. Although we have chosen to insert a “mystical” mechanic and therefore to deviate it from a simple “climb to the top”, this change of course comes perhaps a little too far in the adventure.

In short, the story itself can leave you really satisfied for some points of view, but before we get there we will have to fight, and not a little, with a mechanism that can be repetitive for those who are not fans of this sport. What do you think of this new Nintendo title? Let us know yours in the comments. That’s all for this Mario Golf Super Rush review. If you are looking for some Nintendo Switch titles on sale, we advise you to give one …