Let’s analyze together, in this review, the recently arrived on the shelves Miitopia, remastered version of the title for Nintendo 3DS dated 2017, landed on Nintendo Switch

The Miiverse was the particular social network created by Nintendo based on the particular avatars born with the arrival of the Wii. Later developed on Nintendo Wii U and Nintendo 3DS, the Miiverse then practically disappeared with the arrival of the Nintendo Switch, which has shelved the creation of Miis by relegating them to simple profile images for users. Which then in reality nobody ever uses, always preferring one of the iconic Nintendo characters that are gradually made available. At the time of the 3DS, however, the Miis were the masters and each of us indulged in creating our own low and colorful virtual alter ego.

In the wake of this success, the Kyoto house attempted to ride the wave with Miitopia, a very special turn-based JRPG that has Mii as its protagonists, released in 2017 on Nintendo 3DS. We have already talked to you about our first impressions of the re-release released on Nintendo Switch last May 21, in a preview that you can find by clicking here. This time we want to analyze it more in depth, after having spent several tens of hours in the world of Miitopia, with this review. Backpack on your shoulder, the adventure begins!

The sure customization is not lacking! – Miitopia review

The world of Miitopia is colorful and cheerful, full of populous and fun-filled towns. That is until the Duke of Evil, a classic villain with no real purpose, decides to start steal people’s faces to create monsters. It will be the task of our improvised party to save the faces of the inhabitants by defeating the monsters and put an end to the evil plans of the Duke of Evil. The feeble narrative premise carries us forward throughout the duration of the title, with situations and NPC at the edge of the surreal, but that make the experience at least fun from many points of view, although probably suitable for a younger audience.

The focal point of Miitopia is certainly the excellent degree of customization that Nintendo has been able to put in place thanks to the Mii editor with which we will not only be able to shape our heroes, but also the most important NPCs in terms of plot as well as to the Duke of Evil. Obviously, in case you are a person lacking in inventiveness (like who is writing this review, ed) the game will allow you to use the default faces or, even better, to take those of other players by taking advantage of the online features. Compared to the Nintendo 3DS version of Miitopia, in this re-release on the Switch the editor is really full of details to modify, adjust, move and color. If you have the right inventiveness, that is. 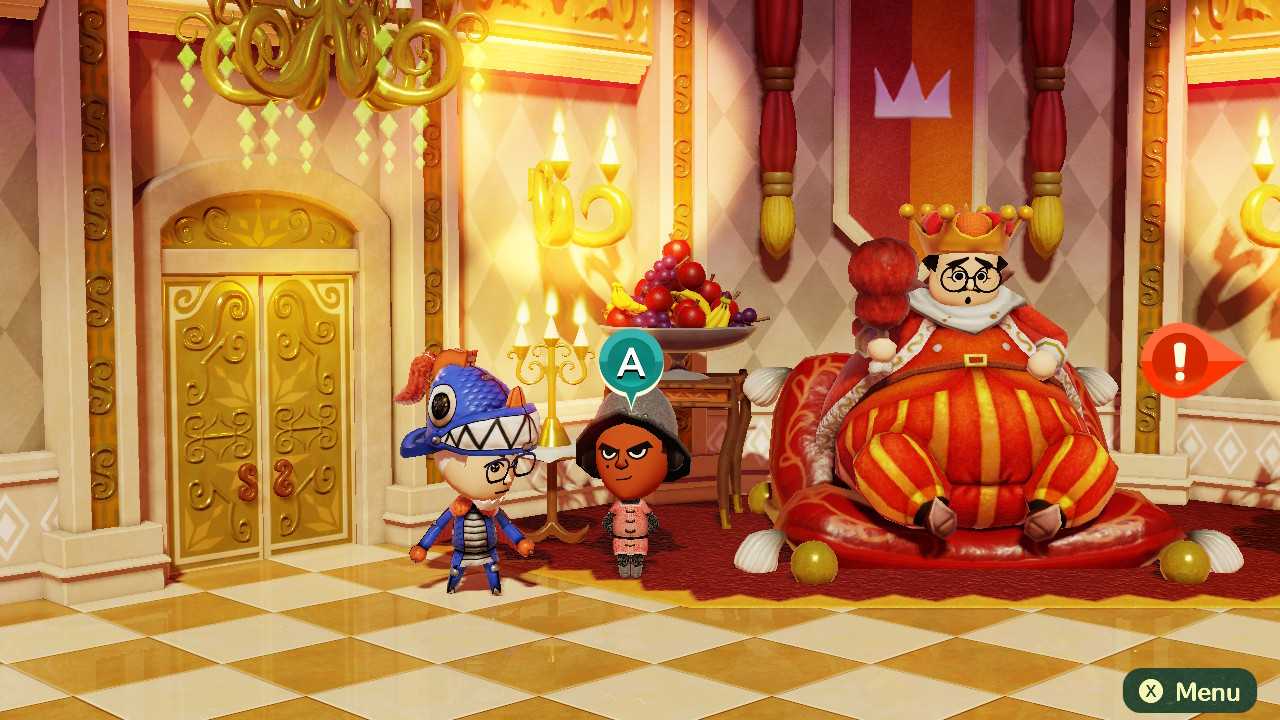 A high degree of customization that is also reflected in the gameplay, with a wide choice of classes to assign to our heroes (trust us, there are really many, including Cats) and equipment. All the armor that we will buy for the characters can be changed in color, although in this case they are predefined. In addition, an additional in-game editor has been added in this version that will allow you to add tricks, wigs and more to Miis, making the creation possibilities practically endless.

If from this side, therefore, Miitopia turns out to be deep and accurate, from the point of view of mere gameplay instead we return to the casual sphere to which the game belongs by right. Basically we are dealing with a job-based shift-based JRPG, but in Miitopia we will only be able to control the actions of our protagonist, with the team left completely at the mercy of Artificial Intelligence. Not that this is particularly fallacious, we admit it, indeed it behaves quite well in almost all situations (even if it tends to be very “defensive”). The lack of possibility of creating a real team strategy, however, makes all the clashes all too similar, thus expiring after a few hours in the repetitiveness. 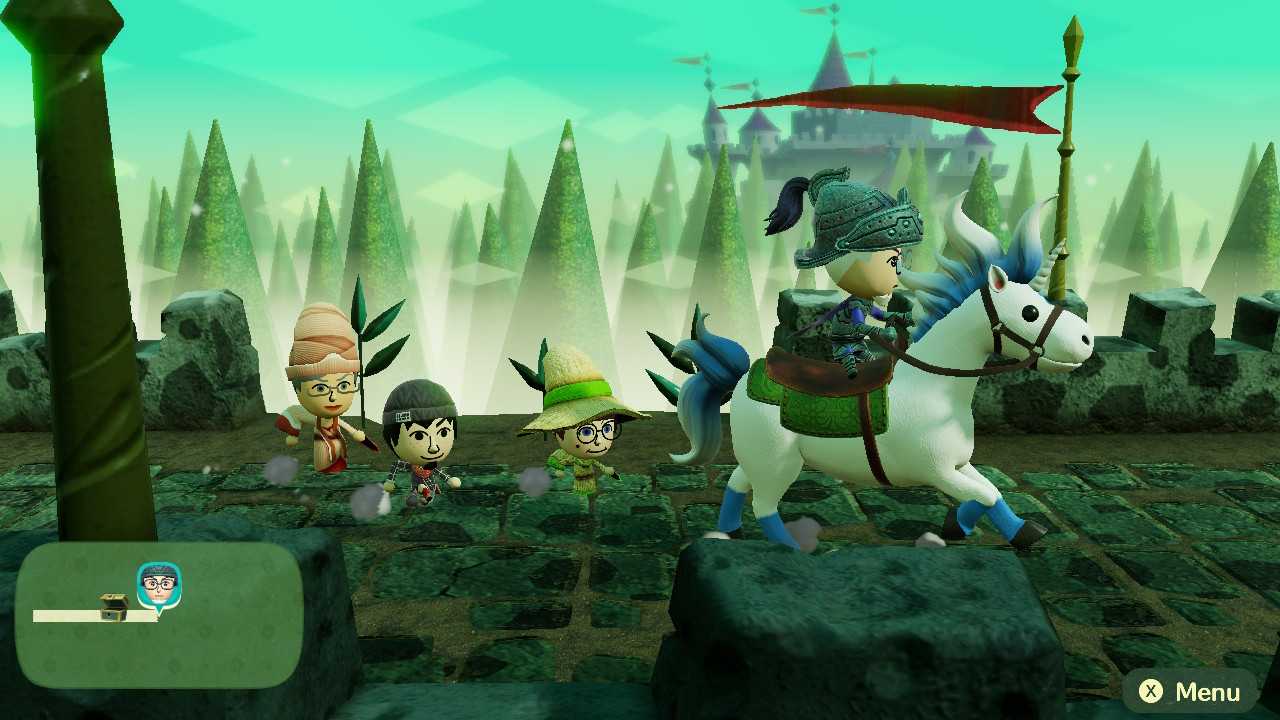 Use ZR, you will go faster – Miitopia Review

If we add that it will not be possible to explore the various areas of the map, but that we will have to limit ourselves to watching our characters run from left to right and help them in the choice of crossroads and in the clashes, you will understand well that boredom could come soon in passionate gamers such. To be intellectually honest though, it is not to you (us, ed) that Miitopia addresses itself. The game aims at that segment of the public (even quite young) not accustomed to the genre and tries to be an entry level JRPG, that is, made to bring the less experienced closer to what is actually a vast and complex world. And to the Miis.

At the end of each portion of the map, the Miis will go to rest in an Inn, which will practically be the central hub for all collateral activities to the fighting. Here our protagonists will obviously be able to rest to recover their energy, refresh themselves by eating what we found on the street (and increase their basic statistics) and take advantage of the game coupons to participate in the Chinese morra or roulette. It will also be possible, by placing two Miis in the same room, to increase the friendship between two party members and thus unlocking new team skills that will prove to be very useful in battle. But be careful: i Miis are fickle beings, they can fight over the stupidest things. 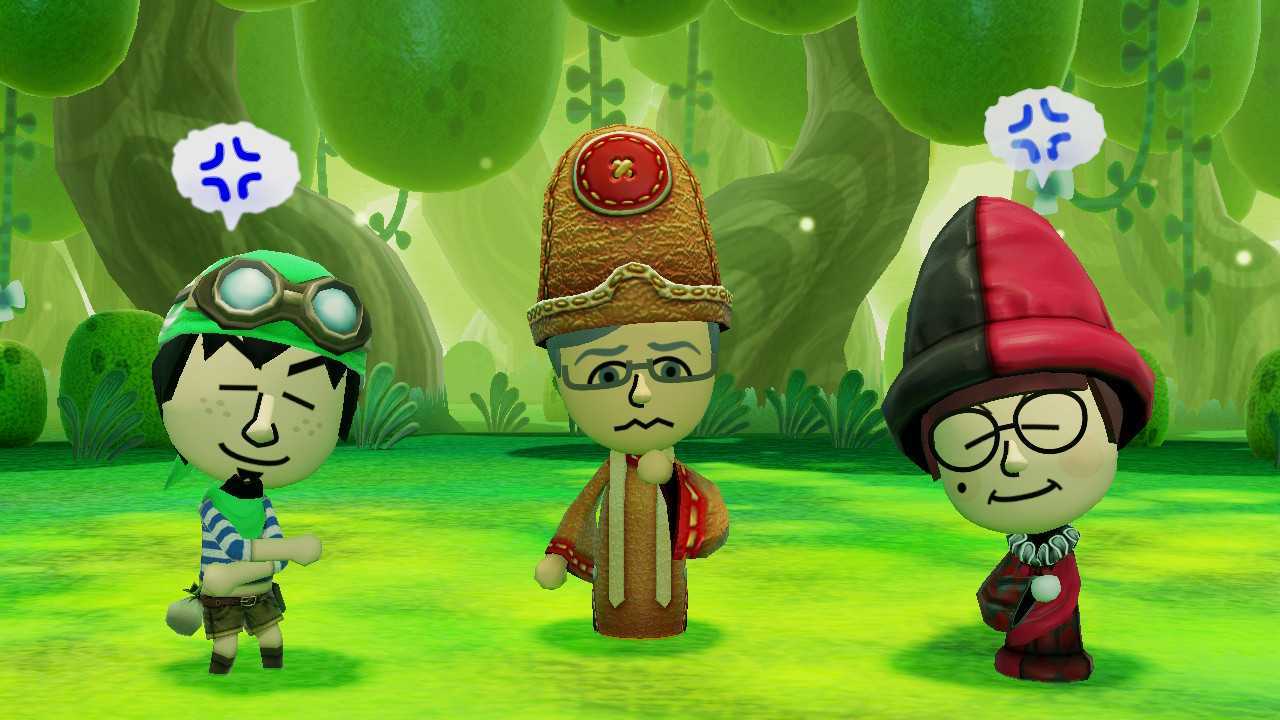 Miis will also be able to leave the inn to go surreal (given the game world) appointments at karaoke, in the library or at the cinema. And always from the inn we will be able to use the coins obtained during our adventures to send the fighter on duty to buy a new weapon or armor. In fact, there are no shops or merchants inside Miitopia, and this will be the only way to improve our equipment. Simple, very simple, but ultimately effective.

Among the other additions of this new version we find the Horse, which you can very well turn into a Unicorn, but still Horse is. The new friend, also fully customizable, will allow you to take advantage of additional skills in combat, especially if you decide to let one of your characters sleep in the stable to increase affinity. Another mechanic that makes fighting even easier, although you can create really cute horses. Like ours, on the other hand. 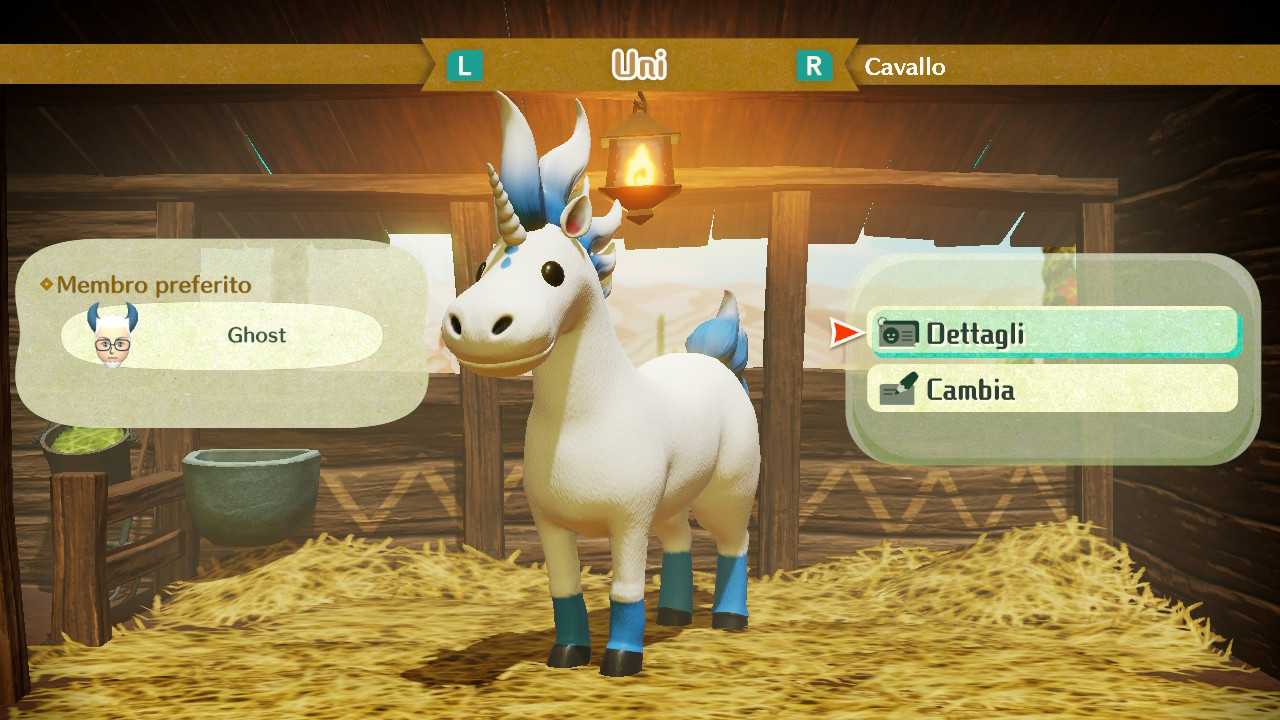 Obviously, the technical and artistic sector has also been improved, thanks to the obvious leap forward of the hardware. Miitopia is really pretty to look at, both thanks to the very detailed Mii models, and thanks to the game world that knows how to alternate the color palette very well, resulting almost never repetitive in the settings. Do not expect aesthetic and graphic masterpieces, of course, we are still talking about the remastered of a game for Nintendo 3DS which definitely suffers from its not very noble origin. We also found ourselves faced with occasional (and inexplicable, we would dare to say) frame rate drops, which albeit sporadic must still be reported in the review. A praise to the Italian localization, practically perfect and very accurate even in the strangest and most disparate ways of saying. 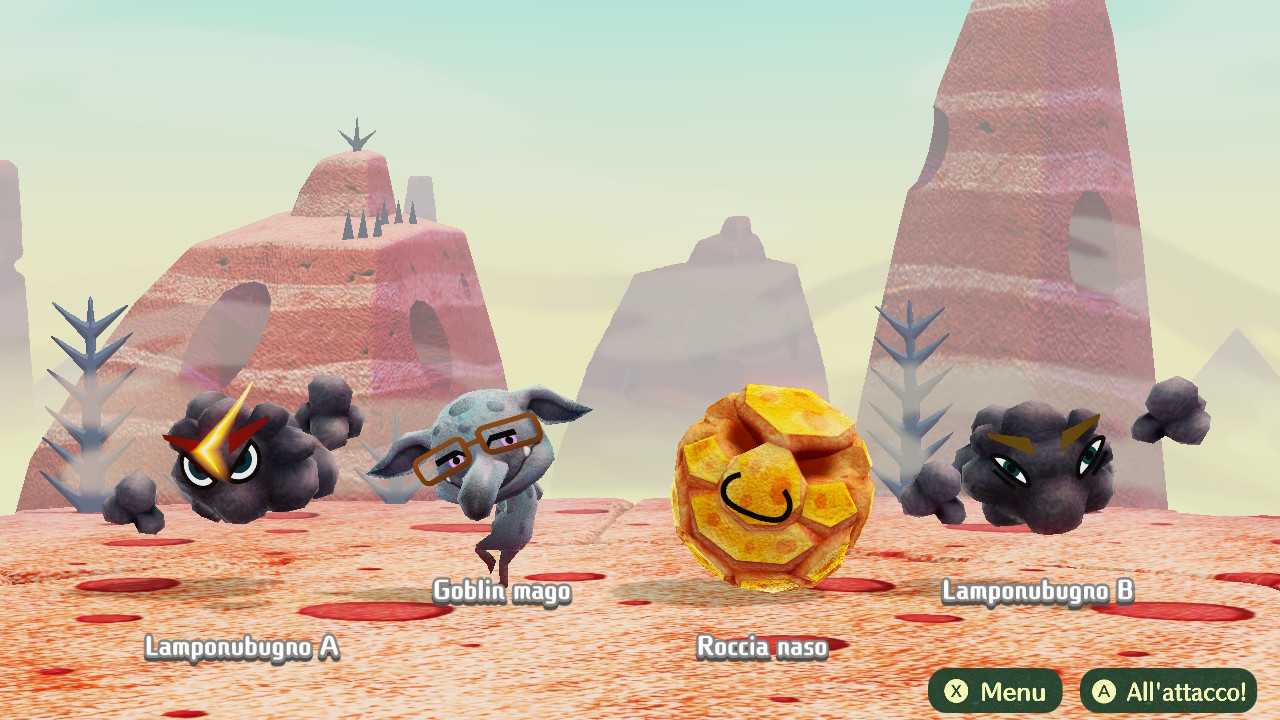 To wrap up this review, Miitopia is definitely part of Nintendo’s casual offering, but that doesn’t necessarily have to be a flaw. The simplicity of the mechanics and of the plot premises will certainly not make a great impression on the most experienced gamers, but we can assure you that, if we leave aside a marked repetitiveness of the background, Miitopia will be able to give you a few tens of hours of fun, tranquility and some witty jokes that does not hurt in this period. Especially recommended for those with inventiveness to sell. Not like us, in short.

We remind you that Miitopia is available on Nintendo Switch in digital and physical format. Have you played the Nintendo title? Write it to us below in the comments, we will continue to keep you updated with all the news, guides and reviews on videogame and tech! And if you are interested in game keys at affordable prices, we recommend that you take a look at the InstantGaming catalog!