From the dirt of the American stadiums to our Nintendo Switches, we find out in our review if Monster Jam: Steel Titans 2 capsizes

During our play sessions with Monster Jam: Steel Titans 2 to write this review, the ritual question escaped us. Why complicate your life with a vehicle whose wheels are higher than the passenger compartment? We are not yet able to give us an answer, but lovers of overseas excess like the world of monster trucks and we are happy to take this opportunity to be fully invested in the extravagance of the most “ignorant” motor competitions that there are. However, we would like to do just a little clarification on the Italian context entirely before proceeding.

Monster truck culture, on our beloved boot, is practically non-existent outside a small circle of enthusiasts. The merit of this niche goes all to the chronicle imbued with charisma by the Sicilian-Tuscan Giacomo “Ciccio” Valenti and his partner Christian Recalcati. Valenti, after having done the same with wrestling for the WWE SmackDown and Raw brands, led to the success of the “cult” competitions among texas hold’em poker players and – with Recalcati – those between the huge vehicles. If you have heard the name of the brand to which the game refers, it was probably the national Ciccio who pronounced it. 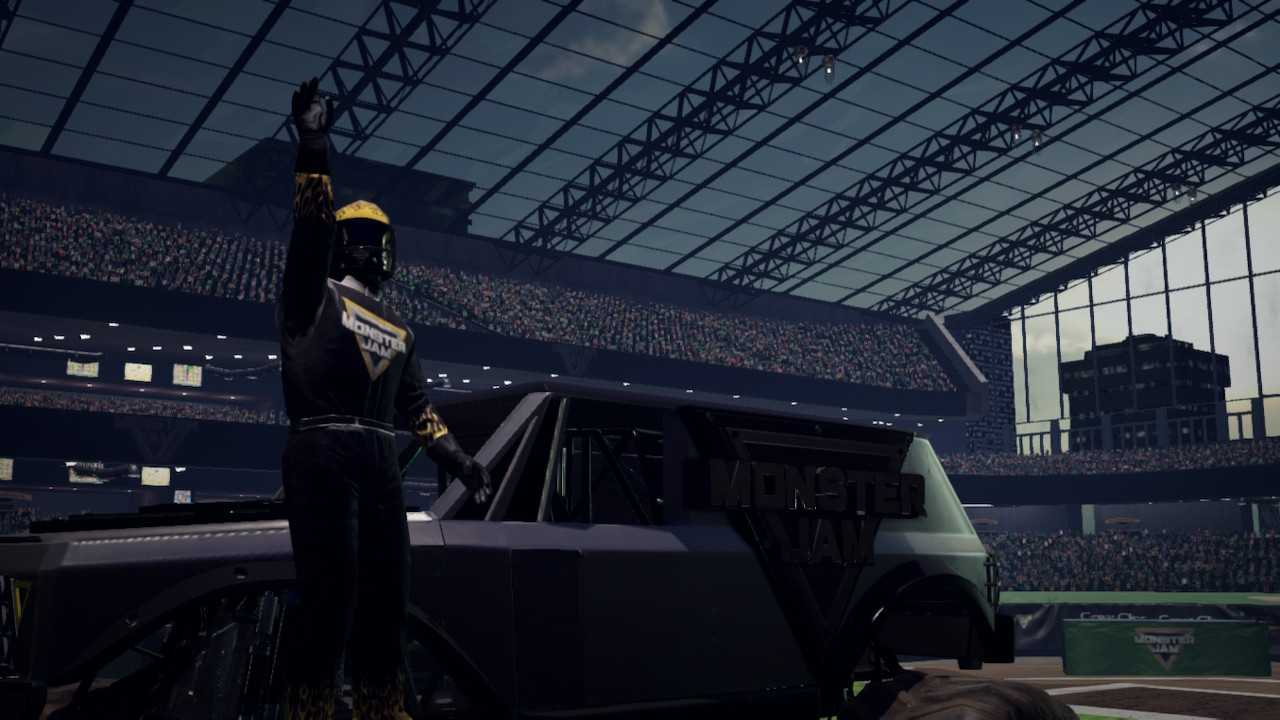 A greasy and greasy kind of driving

If we briefly distract ourselves with the curiosity before we really get to the heart of the review, it’s also to understand how Monster Jam: Steel Titans 2 compares to what it draws from (and, let’s face it, we don’t have a plot to talk about). That “jam” – literally “jam”, metaphorically “mixture” – is not put there by chance. The brand linked to these races, in fact, derives from three different competitions which it took over: the United States Hot Rod Association, TNT Motorsports and USA Motorsports. As such, the result offers more than just racing.

In practice, beyond the classic closed circuit speed race we also have freestyle competitions in which the pilots perform stunts, demolition challenges in which to smash as many props as possible and more. In that sense, the game reflects the sincere enthusiasm of the competitive monster truck scene. The absurdity concerning the use of these sorts of dune buggies, whose wheels boast a diameter of one meter and sixty and also equipped with a rear steering, is not shunned but not ostentatious. The title makes the amused extravagance entirely its focus, for better or for worse. 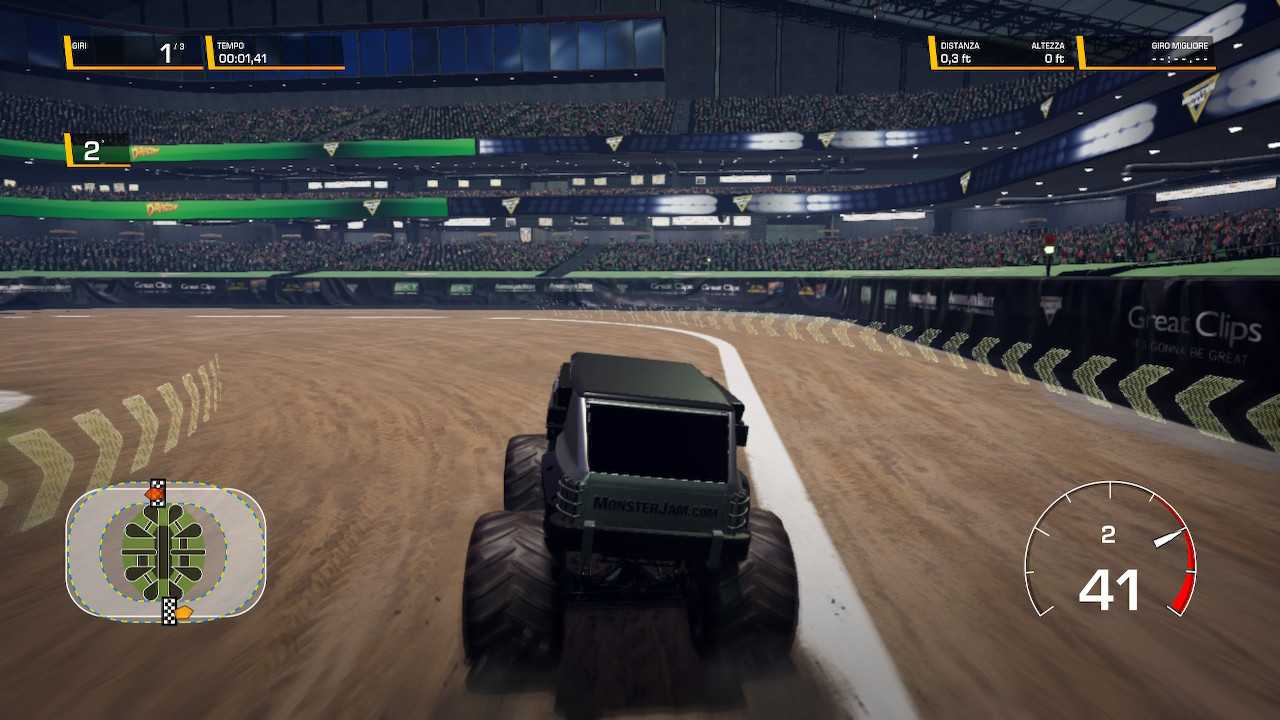 It all starts with the 101 – Monster Jam: Steel Titans 2 review

After the first uploads, the female voice of the tutorial (called 101 or “one-oh-one”, an English expression equivalent to our ABC) of Monster Jam: Steel Titans 2 gets us used to the commands being reviewed. We make no secret of how much we talk with pleasure about this specific aspect: the lessons of TINA (“Your Teacher for Assisted Navigation”) have been dosed well and have always known how to put us at ease, despite the fact that driving monster trucks is not exactly that. simpler than you can find in a video game. Long story short, if you don’t like addiction to inertia and physics while behind the wheel and found high wheels uncomfortable in Mario Kart 7 and Mario Kart 8, this game not for you.

But if you are still one of us, we will briefly explain to you what the various pitfalls of the case are. When we mentioned the double steering of monster trucks, we weren’t lying: this feature of vehicles made it to the gaming medium perfectly intact. Acceleration could therefore not fail to match the “pedals = triggers” combination of contemporary gaming, precisely because the two analog levers each manage a pair of different wheels. The player, to accelerate, must therefore resort to ZR. As a result, the camera can only follow us as best it can. It can also be reset behind the vehicle or in other angles (including interior), but forget about any manual controls. 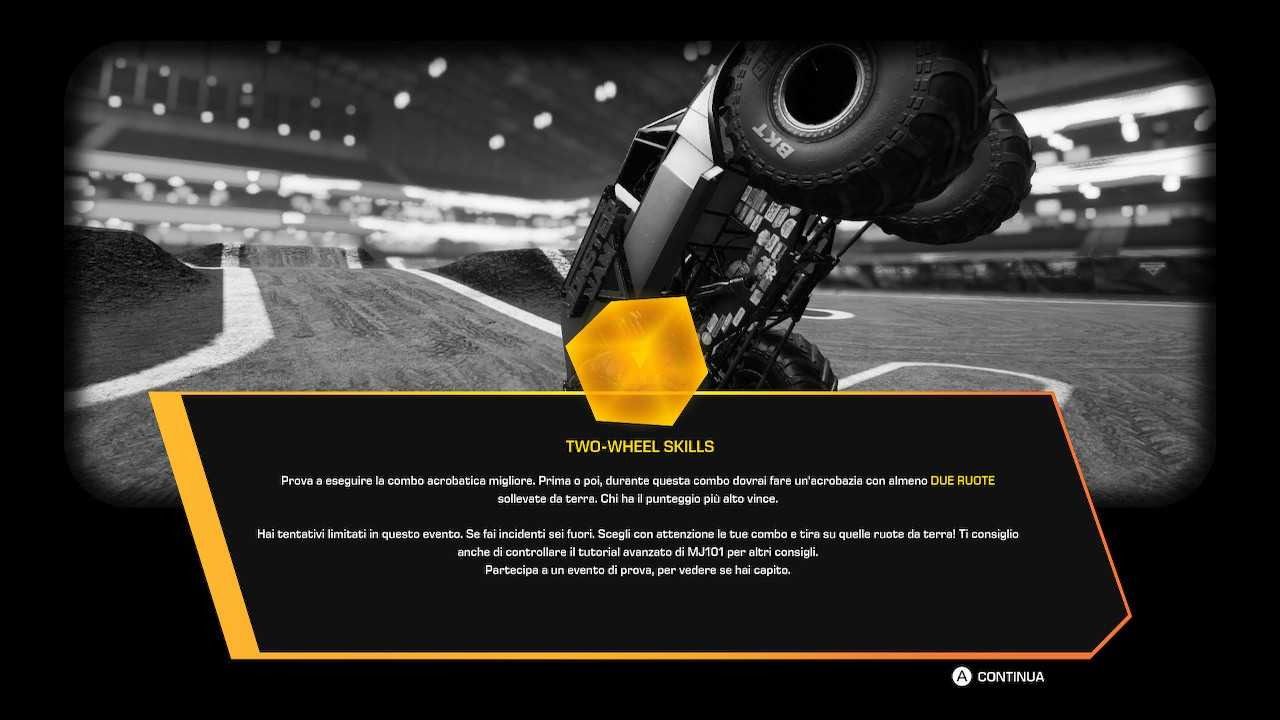 The world is yours (or not) – Monster Jam: Steel Titans 2 review

Once the driving school is over, as well as the Monster Jam: Steel Titans 2 itself, our review also moves to the small and modest open world where the game itself encourages us to explore and experiment. It is not that the tutorial ends at this point, because in reality – although few – the points of interest in the map are there. In our open garage in fact, we have additional challenges to try our hand at, while around the small game world we can find objects to collect, between one occasion to end up in the air and the other. The title, at least, knows how to reward the player’s curiosity.

For better or for worse, it is only by exploring the map that we become aware of the others challenges available. The disciplines in which we can try our hand vary from simple race in a ring circuit (in which the time is evaluated, since the two participants are offset from each other by half a lap) to freestyle, passing through the destruction of props, more races traditional and so on. We’d be more happy to talk about it here, but first we’d like to focus a second on driving itself. The various tricks of the gameplay are reflected in almost every mode, so we would like to briefly explain what we have drawn from this title. 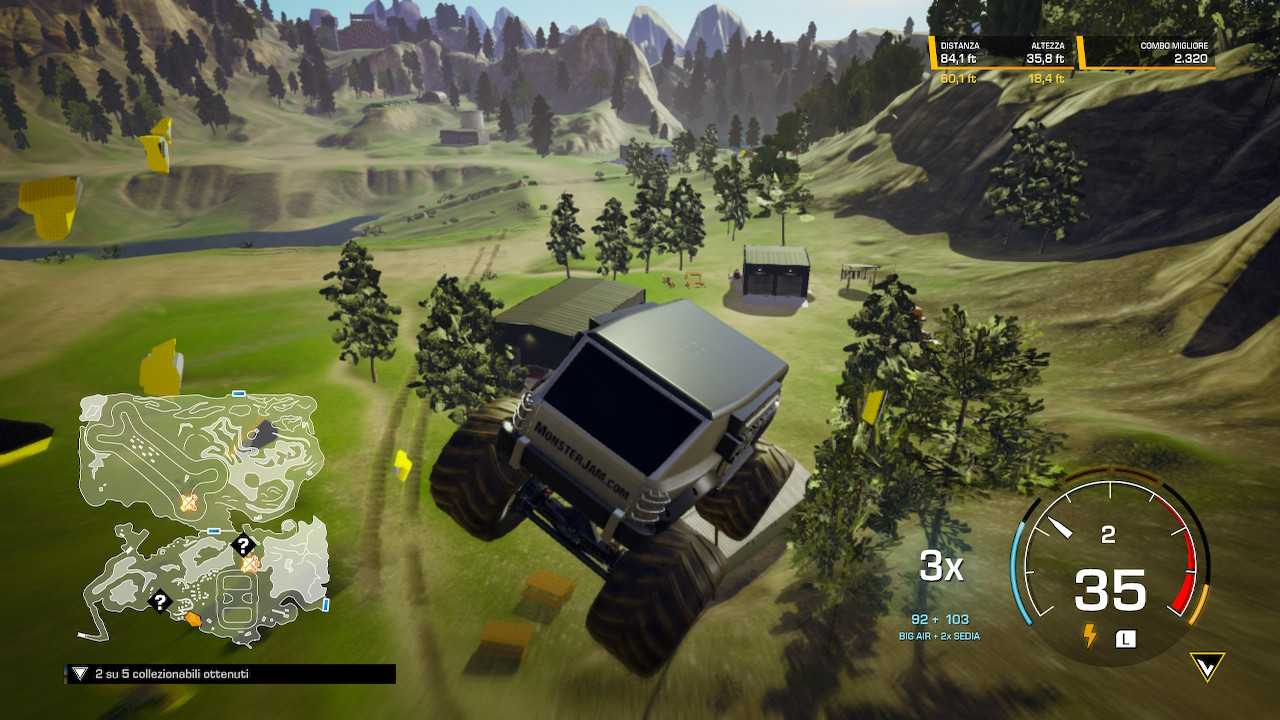 To avoid repeating ourselves too much throughout this review, let’s briefly discuss what the possibility of roll over in Monster Jam: Steel Titans 2. We can get up and expect the game to regenerate us automatically, or do it with our own hands… that is, wheels. By accelerating in two directions simultaneously once on the ground, you can break the countdown to turn a potential failure into a profitable stunt. Not unlike the Sonic Rush series (or Sonic Generations and Forces, if you don’t like portable consoles), in fact, stunts fill a turbo indicator.

Using the boost can make a difference in the most disparate situations, especially in outdoor races. Of course, this also exposes us to the additional risk of find ourselves with the cockpit on the ground; again, “for better or for worse”. The game knows how to face a challenge when it sees fit, deciding what is good to do and what is not based on the type of competition we face. This also includes the possibility of smash our body following an accident on the course or with an overturn on our part, which in some races is not allowed beyond a certain limit of times. 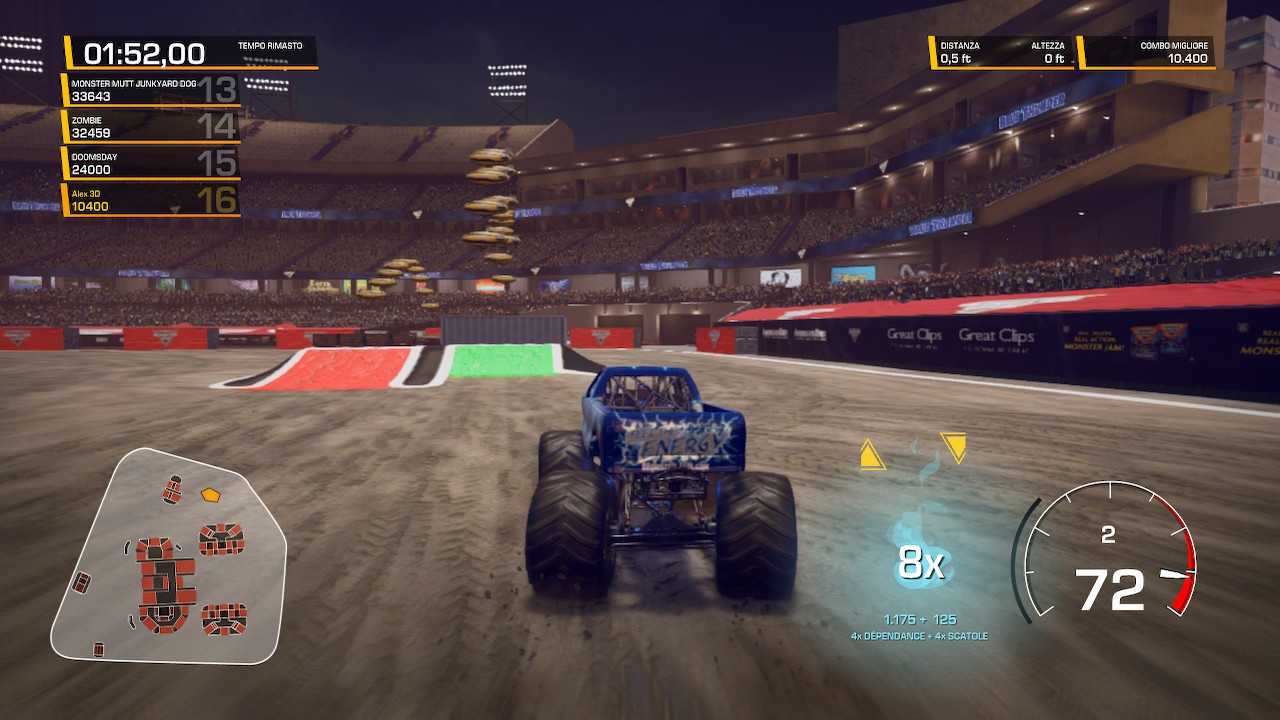 The competitions to unlock with new vehicles after the first two (the one of the tutorials and the initial one), which we will not spoil in the review phase, in Monster Jam: Steel Titans 2 they are many. We have already talked about the time trial between two drivers, which is one of the first types of races that the game puts us up against, but in reality there are more ways to compete with other contenders. Just to stay in the speed context we have the Waypoint, the “outdoor races” we alluded to earlier, in which we have to reach several checkpoints on the map before the others.

There is no well-defined track edge outside the perimeter of the map, which allows us to take the most treacherous shortcuts, at our own peril. Steeper climbs usually mean we’re taking an unorthodox shortcut, but by managing acceleration, speed, inertia, weight and – of course – turbo well, we can bend the rules a bit as we please. The demolition competitionsinstead, they ask us to destroy objects by ringing combo before our time runs out, trying to score higher than the other drivers. 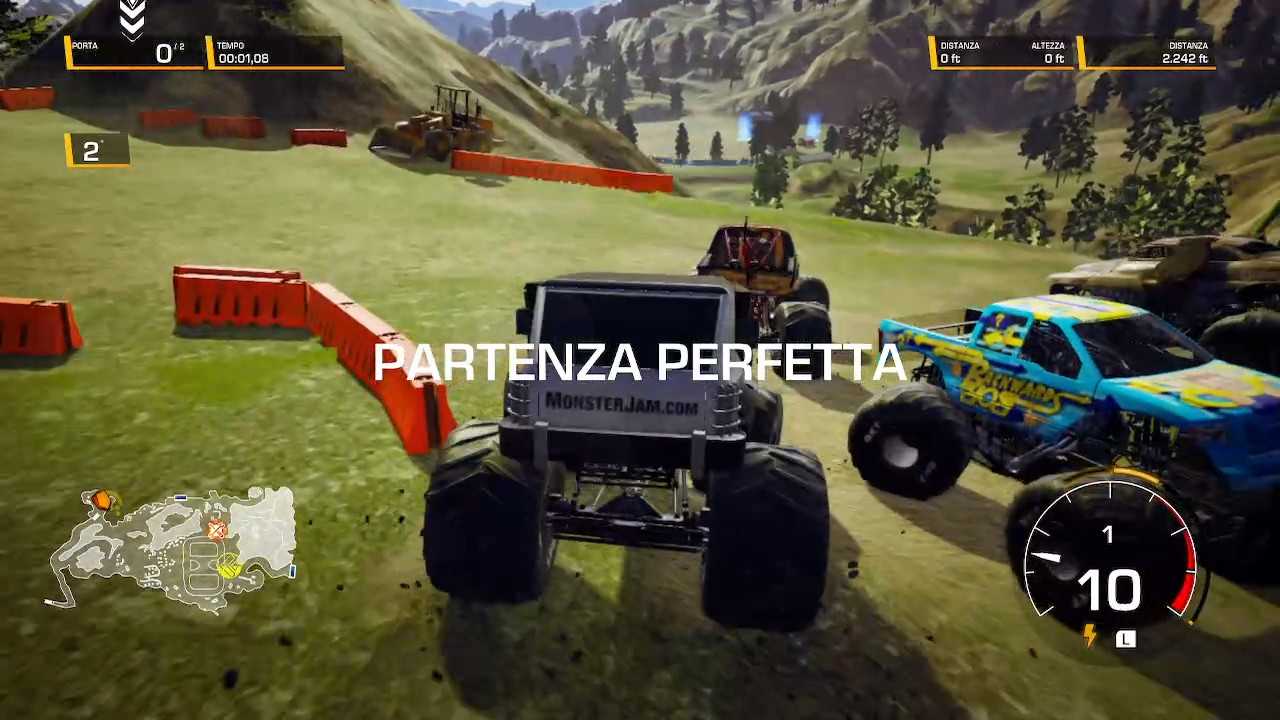 Motorsport competitions also extend to freestyle, in which we have to put to good use what we have learned by overturning “with style” in Monster Jam: Steel Titans 2. Here too, in fact, the mechanics of the combo, which among other things prevents the timer from stopping at zero if the last linked stunt has not yet ended. Because in this case it is always about stunts, like the spin that can be obtained with the double steering that always knows how to make the crowd into raptures. However, competitions are not distinguished only by regulation, like the other type of “accident-free” stunt competition we alluded to earlier.

The other watershed, however, is the place in which we can try our hand at various competitions. The theater of the races can in fact be as much the dirt road of the stadium to which the homonymous TV show has accustomed us, as the open world map suspended between the patriotic realism of an American flag and the improbable giant hydrant of the case. Depending on where we race, some details may change, such as the presence of a recommended “Spyro circuit style” course for outdoor demolitions. There is not much more to say, if not for the presence of multiplayer. 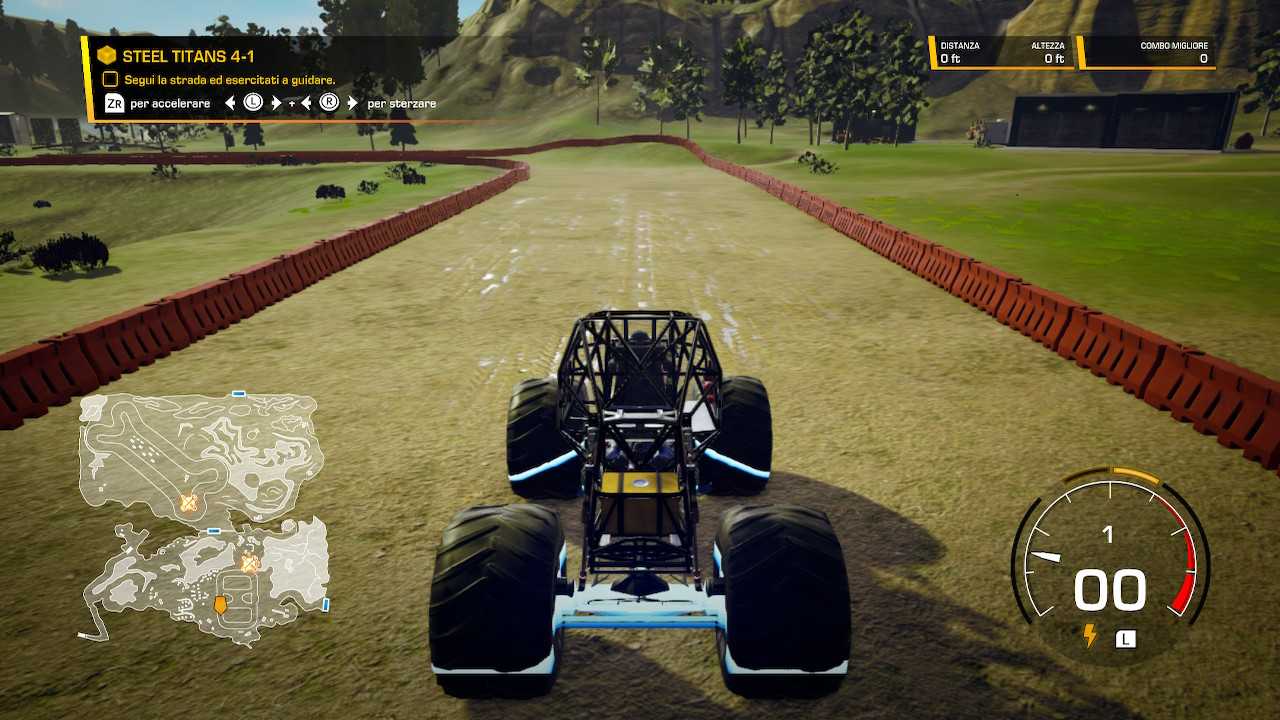 The pause menus that offer free driving phases allow three options for the multiplayer: online, local connection with another Nintendo Switch console, and finally that endangered species that is the split screen. The latter allows us to have fun together with a second player locally in seven different disciplines: head-to-head (the “ring” races), circuit (the “classic” races, Waypoint, Freestyle, Two-wheel skills (the “accident-free” stunts), destruction in time and free run. The latter consists in the possibility of going, without any restrictions, for a stroll around the map, each one aboard his monster truck.

Circuit, which we have not talked about until now, consists of a real race on the track, outside. If nothing else, the presence of the different variations on the theme it helps relatively longevity of the title, as well as the ability to share (at least with the locations and vehicles unlocked in single player so far) everything with other players. At this point, it all depends on how well the “easy roll over” guide – although it is a deliberate game design choice – fits the tastes of the average player. In this sense, albeit giving to the good will of THQ Nordic e Rainbow the benefit of the doubt, let’s say it from now: it is still about a niche product. 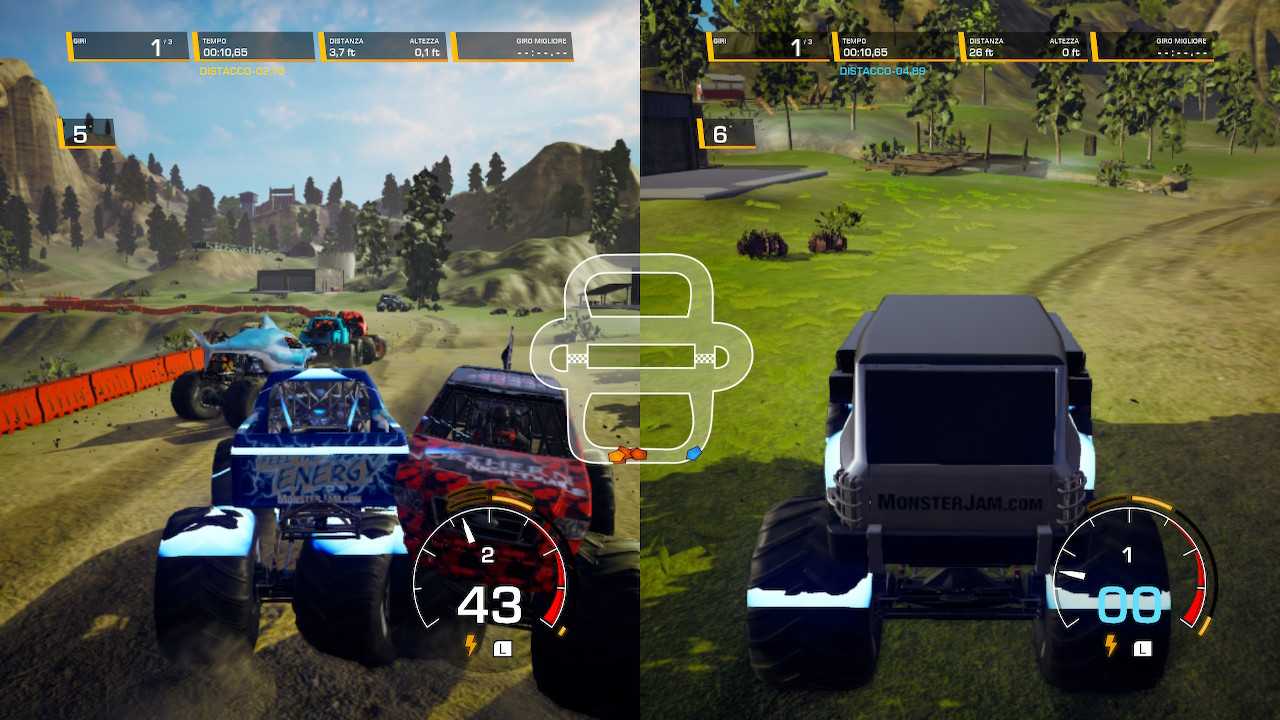 At the risk of burning the last quote to Ciccio Valenti even before writing a review relating to wrestling, we are going to the final stages regarding Monster Jam: Steel Titans 2. In fact, we are talking about the technical sector, and we’re here to speak with brutal honesty about the graphics. Nintendo Switch, as a console, is at the center of a …