Teyon takes us into the world of giant bigfoot racing thanks to his Monster Truck Championship, which we talk about in our review

Bigger is better is a slogan so dear to the American world, which has always been inexorably attracted by the most unbridled exaggeration, be it linked to the most caciarone and destructive films, passing through comics and ending up also touching the sports environment . I think of the visual exaggerations of the Super Bowl, or the almost carnivalesque fiction of wrestling, but also the world of four wheels is certainly not without similar and hypertrophic examples, as it shows us in a very explanatory and clear way. Monster Truck Championship.

The title developed by Teyon its protagonists are the very tamarrissimi motorized bigfoot, motorized beasts equipped with gigantic wheels over a meter in diameter, capable of performing spectacular acrobatics, as well as challenging each other in tight circuit races. So much abundance, however, will it have translated into an equal playful quality? Let’s find out together in our review.

Engines on the track

While certainly not the first game to tackle this motorsport reality, despite its self-proclaimed first dedicated title (let’s not forget, in fact, the recent Monster Jam: Steel Titans 2), it is undeniable that the world of sport in question is not so rooted and known in Old Europe, therefore one always approaches with curiosity to similar sorties in territories not always beaten. The first impact with Monster Truck Championship, however, it is certainly not as stunning or original as one might be led to think: loaded the game and started the game for the first time, in fact, we will find a very thin editor of our avatar, through which we can only set the name, country of origin and difficulty of the game.

In short, not really a prominent business card. Fortunately, the impact with the game tutorial, which through a training track and a series of specific lessons, will provide a rich ed comprehensive overview of driveability and tricks to be done with our four-wheeled beast first. Certainly a precious ally, which we will do well to dissect before launching into classic career mode. 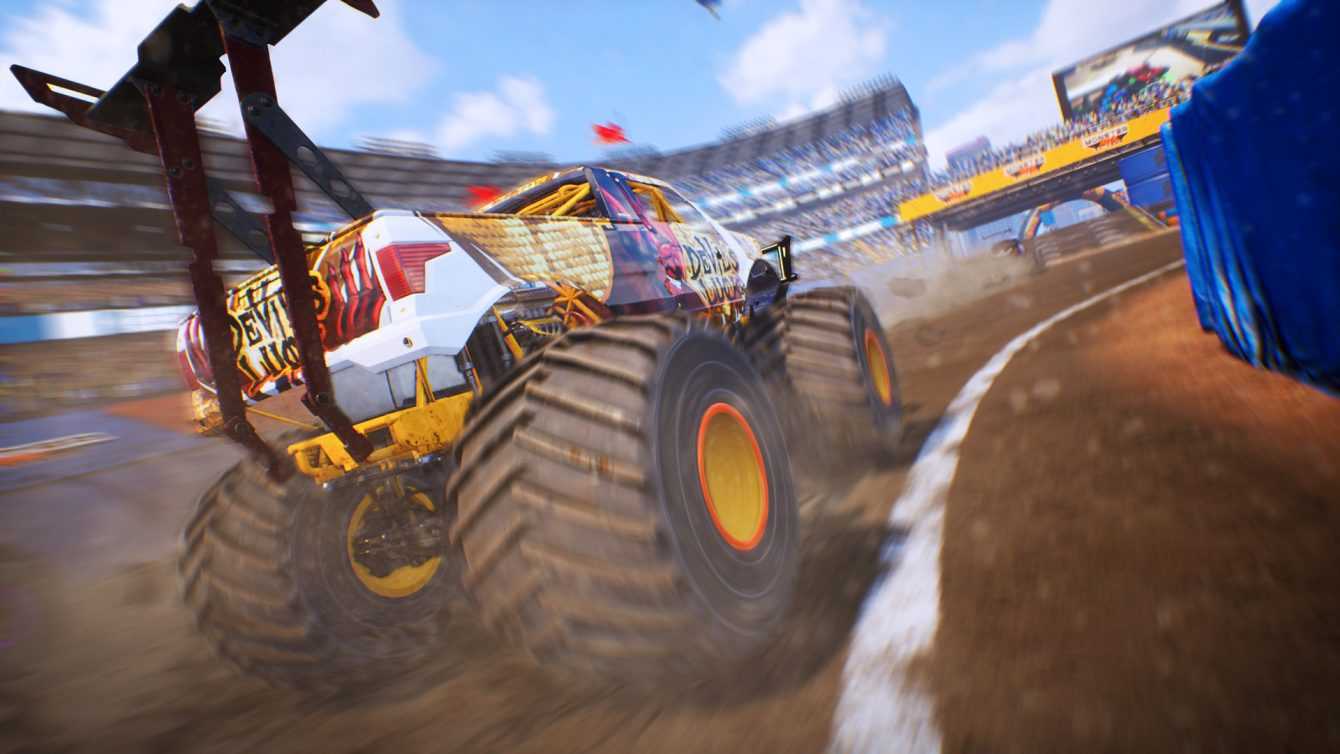 This will be structured in three different alloys of increasing difficulty, each divided into 10 events, in turn fragmented into various races, which will unfold along the four game modes present: race, duel, freestyle and destruction. The first is the classic circuit race together with 7 other opponents; the second will see us competing with only one opponent, within specific tracks, with the aim of being the first to cross the finish line; in freestyle and destruction we will compete solo, and the aim will be to carry out the greatest number of stunts and destroy as many objects as possible respectively.

Needless to say, it will be essential to try to get the best possible placement every time, so as to accumulate points and climb the ranking of the event in question. A structure that is all in all linear and free of flickers and which in any case will not be extremely long-lived, since it is possible to complete everything with 2-3 afternoons of intense play. 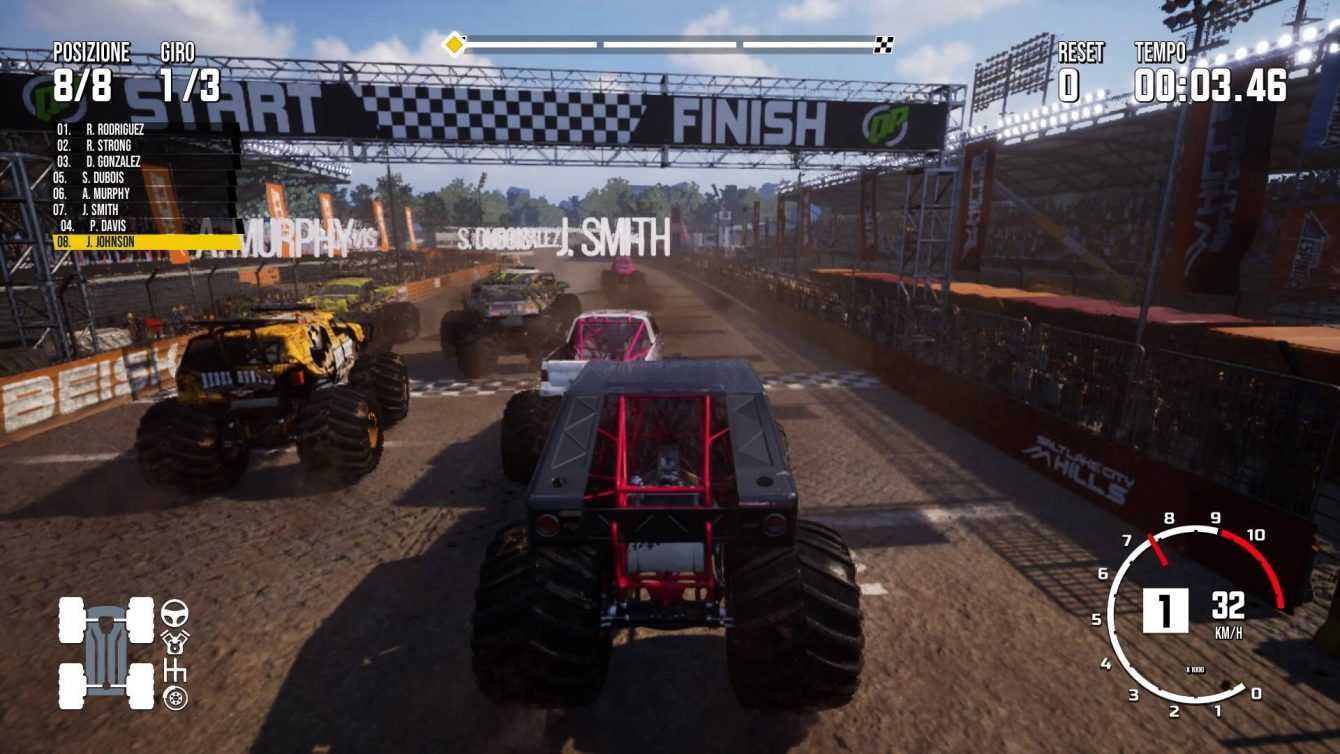 More interesting is everything that, on the other hand, revolves around the customization of our monster truck and the team: inside the garage we can, in fact, dedicate ourselves to tuning of our vehicle, investing the money earned through the career in the purchase of new parts, bodies and liveries. It will also be possible to act directly on the set-up of the vehicle, so as to find the balance that best suits our driving style. Although very schematic, the whole proved to be the most interesting element of the production Teyon.

As well as good has been the management of our team, which we will be able to enrich by recruiting engineers, mechanics or technical directors, each able to provide bonuses and penalties to our performance. There will also be the possibility of signing contracts with some sponsors who, if we overcome the required challenges, will reward us with hard cash, as well as make new pieces available in our garage. Small tricks that, while tracing what we saw in Dirt 5, give a little more thickness to Monster Truck Championship. 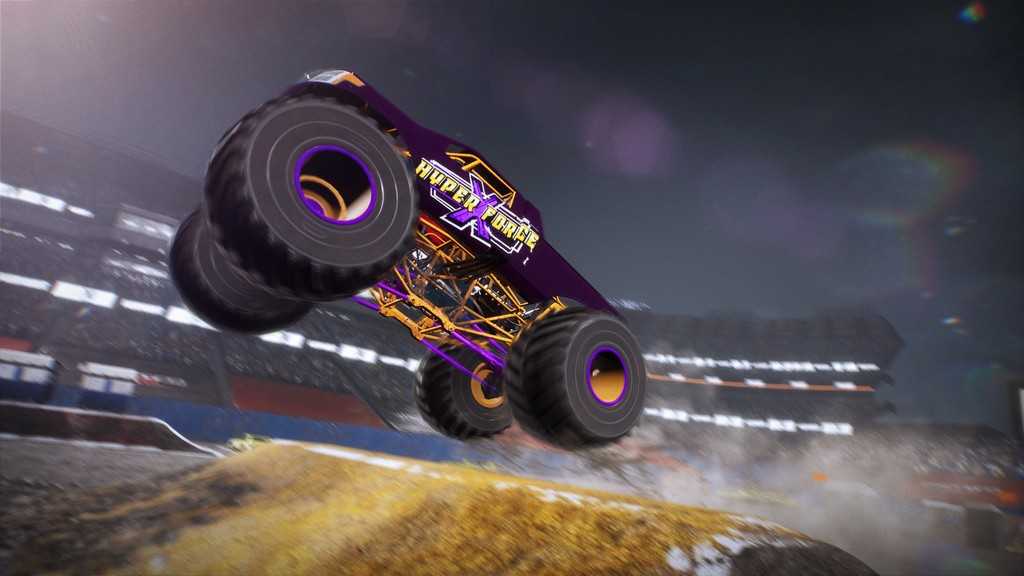 On the playability front, although the team is keen to emphasize the simulative nature of its production, it is undeniable how everything pushes blatantly in the direction of a driving model certainly more inclined to arcade, even if disabling all the aids the situation becomes slightly more complex to tame. Given, however, the particularity of the means used, I confess that a little practice is necessary to be able to effectively manage the behavior of our beast, since this will frequently tend to irretrievably lose grip, ending up in sudden spin. .

Forget, therefore, to keep the accelerator constantly pressed, but be prepared to dose the power with extreme parsimony, in addition to the axles of the wheels that can be steered independently (via the two analog sticks). Also present a damage system, both mechanical and aesthetic, which in addition to limiting performance during races will also have a slight impact on our balance sheet. Even in this case, however, the weight of this feature is not of prominent importance, revealing itself at times marginal. Just as the adversary’s AI was certainly not brilliant, an element that levels down the general difficulty of production, even if faced at the most demanding levels. 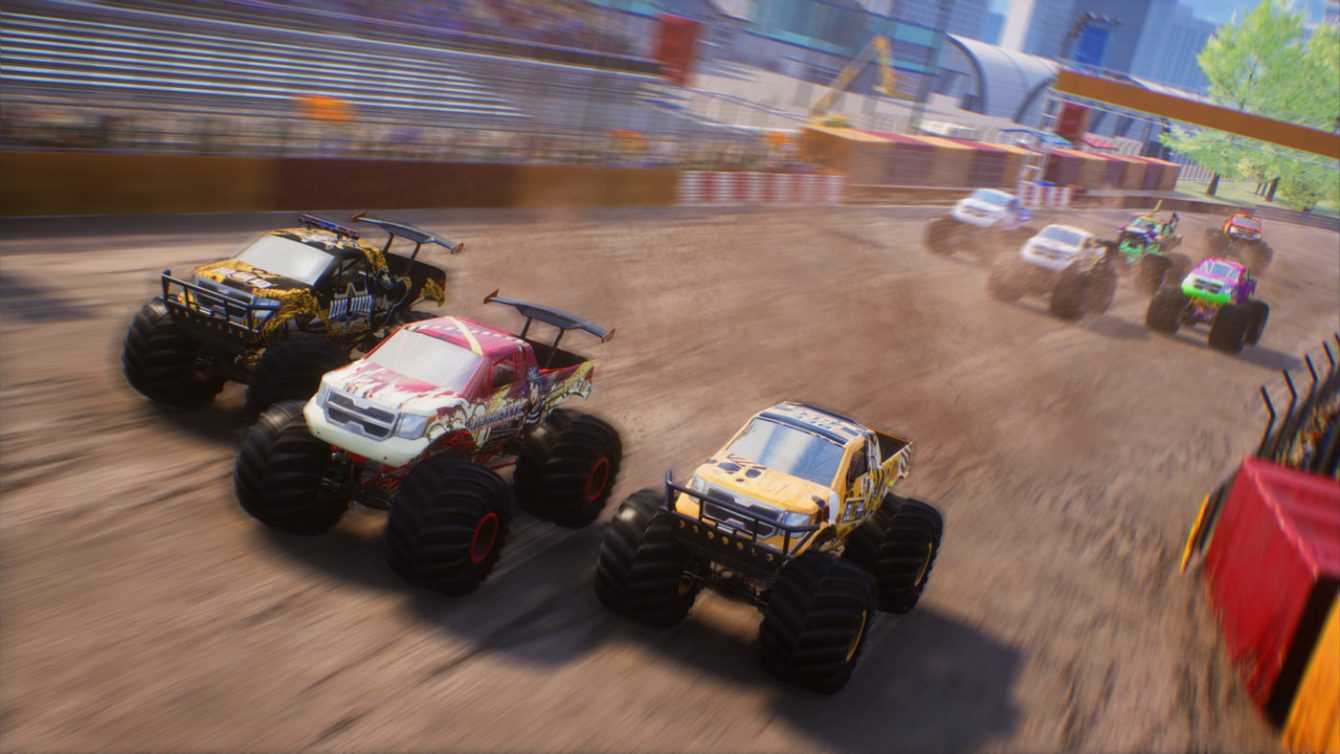 The current gen version of Monster Truck Championship highlights the certainly not stellar nature of the available budget Teyon: the test on PS5 in fact, it showed a rather modest visual rendering, with the bigfoot models representing (obviously) the elements created in the most convincing way, together with the various tracks. The whole outline is fairly anonymous, with particle effects present but certainly not exciting, and arenas that, although they give back a fair sense of breadth, enjoy very sketchy details after all.

Without too many smudges the frame rate and general stability, but especially on Sony consoles it is regrettable that the feature del DualSense: the adaptive triggers and the haptic feedback could have been perfectly matched to the stresses of the engine and the racing terrain. I wish I could also say a few words on the online multiplayer sector, limited to competitions and duels, but during my tests I was unable to meet any other players. The audio sector is normal, as well as the desire to localize everything in Italian, voice over included, which however lacks expressiveness. 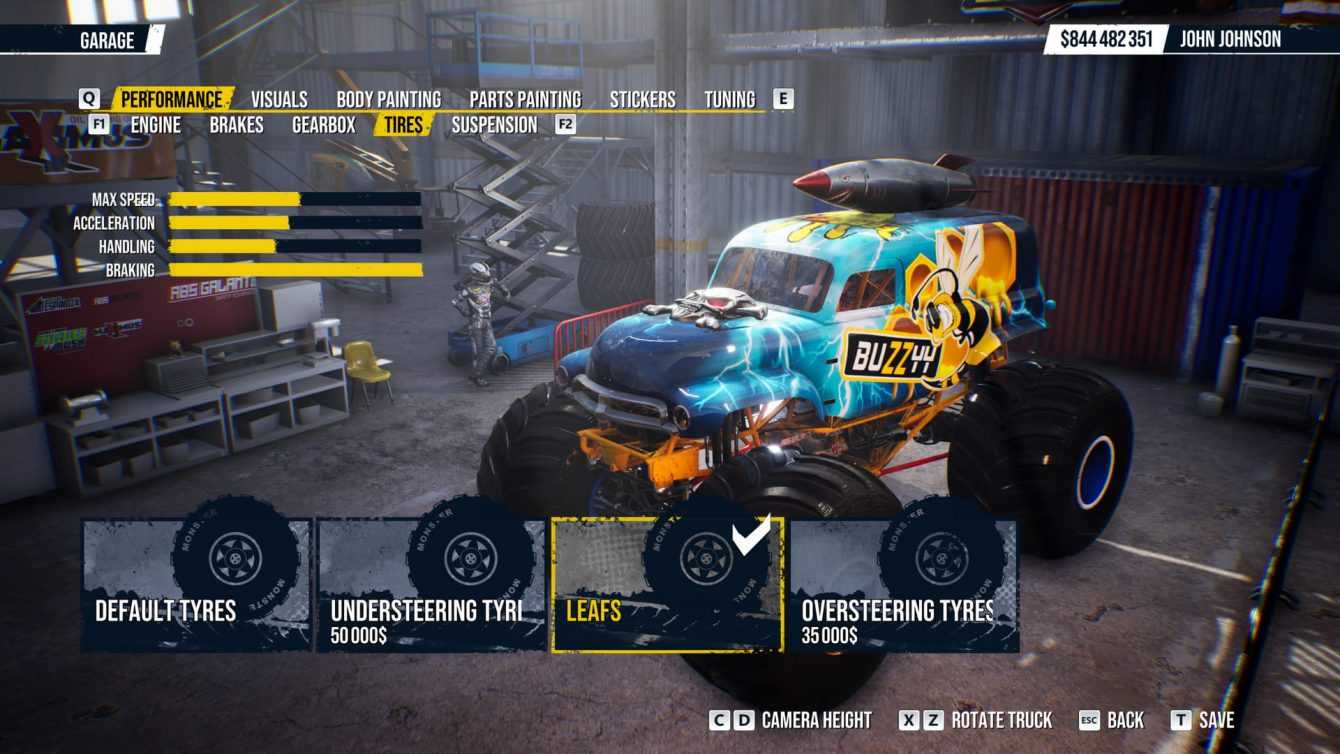 To answer the question asked at the beginning of the review of Monster Truck Championship, we can say that in this case the greatness was unfortunately not synonymous with uncompromising quality. The title, despite being convincing in its entirety, fails to go beyond a large enough, due to a playful structure that is too overused and slender.

If it is true that the tuning and management of the team manage to guarantee a pinch of panache, the one-chord progression and the certainly not stellar difficulty end up flattening everything a little too much, failing to make the creature go. Teyon beyond the simple homework. Just as it is not surprising this current gen version, which especially in the case of PS5 guilty chooses not to take advantage of that small boost that could have guaranteed the exploitation of the DualSense.

Let us know what you think in the comments section, here on TechGameWorld.com, while if you are interested in the game and want to buy it at a discounted price, run on the Instant Gaming pages.

Bigger is not always better