Naraka: Bladepoint is a battle royale that tries to stand out from the crowd, let’s find out if it has succeeded in its intent in this review

Are you tired of the usual battle royals where without good aim, you die in the blink of an eye? Naraka: Bladepoint comes as an alternative to some FPS titles such as Call of Duty: Warzone or Apex Legends, and in this review we will find out if it is a valid project. Naraka is one of the first action-adventure battle royals in which instead of participating in last-shot shootouts, you face enemies using sidearms.

The setting of the game is very similar to the other battle royale: huge game map, lots of other players to face, “safe-zone” that tightens more and more over time, the last survivor wins. What characterizes Naraka: Bladepoint is a gameplay ed combat system totalmente based a lot on action mechanics. The title is made by 24 Entertainment and is available on PC and PS5 from 12 August 2021.

The East never ceases to fascinate

In this Naraka: Bladepoint review we won’t go into too much of the story, as it is almost non-existent. Basically the game is set on a secret eastern island, where in the past ancient divinities fought each other until extinction, now leaving room for the characters of the game, in eternal conflict to earn the last remnants of the divine power remained. This story, introduced thanks to a short opening video, is a simple excuse to go straight to the tutorial afterwards.

Given the nature of the game it is normal that the focus is more towards the gameplay rather than the story, however, leaving a bad taste in the mouth for the unexpressed potential. In fact, in Naraka: Bladepoint there is a strong influence of the Chinese literary genre Wuxia, both for the setting but also for the characters. The heroes of the game are charismatic, each with one textual description of its history and origins, even if it is too little detailed. 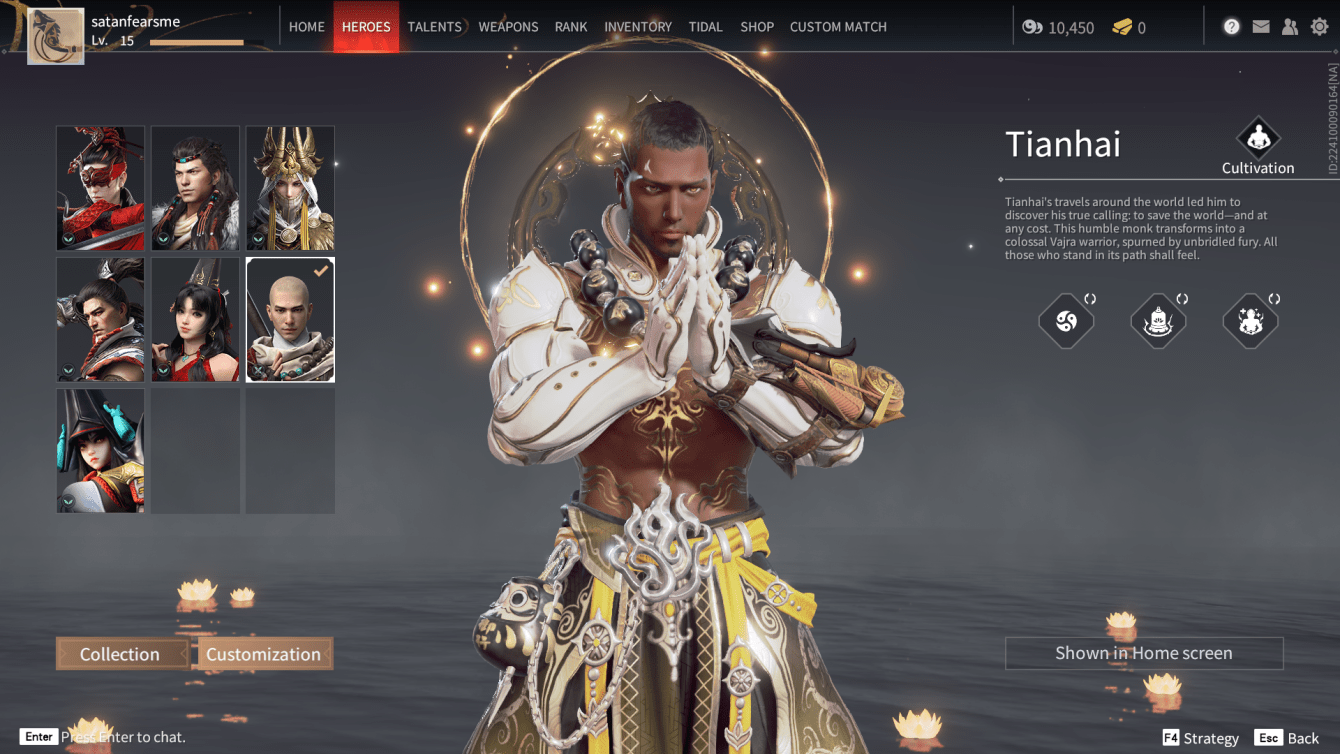 As for the gameplay, Naraka: Bladepoint is in all respects a Fast-paced third-person action game, with a combat system based mainly on the use of melee weapons where reflections matter a lot. The three main moves are: basic attack, charged attack and counter attack. We will be able to attack using two buttons, one for vertical attacks and one for horizontal attacks, the former can be avoided with a simple dodge, while the latter can be avoided by lowering or jumping.

By holding down the key for basic attacks we will be able to carry out charged attacks that inflict a lot of damage and interrupt the opponent’s attacks. The only way to counter a charged attack is to punish it with a parry, which can be done by pressing the two buttons of the basic attacks at the same time. The interesting thing is that a successful parry not only blocks the opponent’s charged attack, but leaves the defenseless enemy resulting in loss of equipped weapon.

In addition to melee weapons such as broadswords, long swords, katanas, sabers, spears and nunchaku, you can also use ranged weapons, even if they are difficult to use and very situational. As secondary weapons for a more approach silent and in the distance they are perfect, without forgetting that most of the fights will be melee. An interesting mechanic related to weapons (present, for example also in titles like Monster Hunter) is the durability. In fact, each weapon has a bar formed by notches, which increase according to the color (rarity) of the weapon and decrease according to the use made of it. Also, the more we use a particular weapon, the more the affinity level, with a reward list for each weapon full of rewards to be redeemed according to the level reached.

As in any battle royale, the loot is essential and during the game we will be able to find many kinds of objects, each with a different color that establishes their rarity. We will have white for the commons, blue for the rare, purple for the legendaries and gold for the epics. In addition to weapons, it will be possible to find consumables such as medical herbs to cure us, giade magiche that enhance passive statistics such as life, attack and defense of our character, armor powder to restore the notches of durability of our armor, tool boxes to repair the weapons and finally the charges to use the grappling hook. 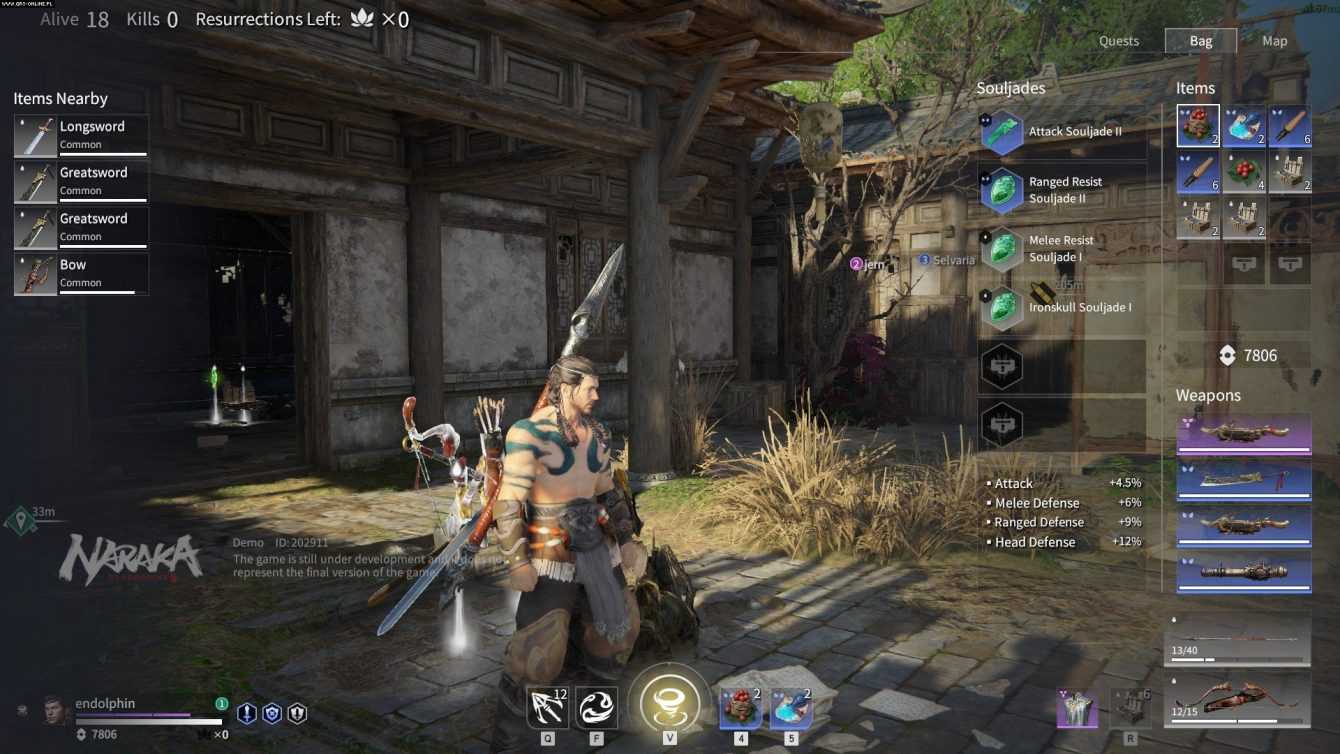 About the grappling hook, this object is fundamental for the gameplay of Naraka: Bladepoint and touches to exploit it in the best possible way to overwhelm the enemies. Thanks to it it is possible move wherever you want with extreme agility, greatly increasing the character’s mobility. We will be able to climb any type of building or tree, reaching the top to escape from an enemy or hook it to go on him ready to launch a blow. It is definitely useful if used in the correct way, we can surprise any enemy from a roof but you have to pay attention, because as we have already anticipated it needs the charges to be used, so it is not unlimited.

Each character will have the unique special abilities to be used against opponents, all spectacular in their own way. Depending on the character chosen these skills change, passing from the healer’s healing, the assassin’s invisibility, or the warrior’s lethal thrusts.

The skills available to all characters are two, the basic one that has a reduced cooldown and we can often use it in battle, and a very powerful ending that loads after a long time to 100% completion as for the ultimate heroes in Overwatch. The game is in continuous updating and new usable characters are added, each with different special moves that keep the gameplay always fresh and never repetitive.

Each character can be customized not only through skins, poses, emotes, gestures and accessories of all kinds, but also using an ad hoc editor mode, completely changing their physical appearance. The customization is really well taken care of, as if we were creating our own hero from an RPG from scratch. 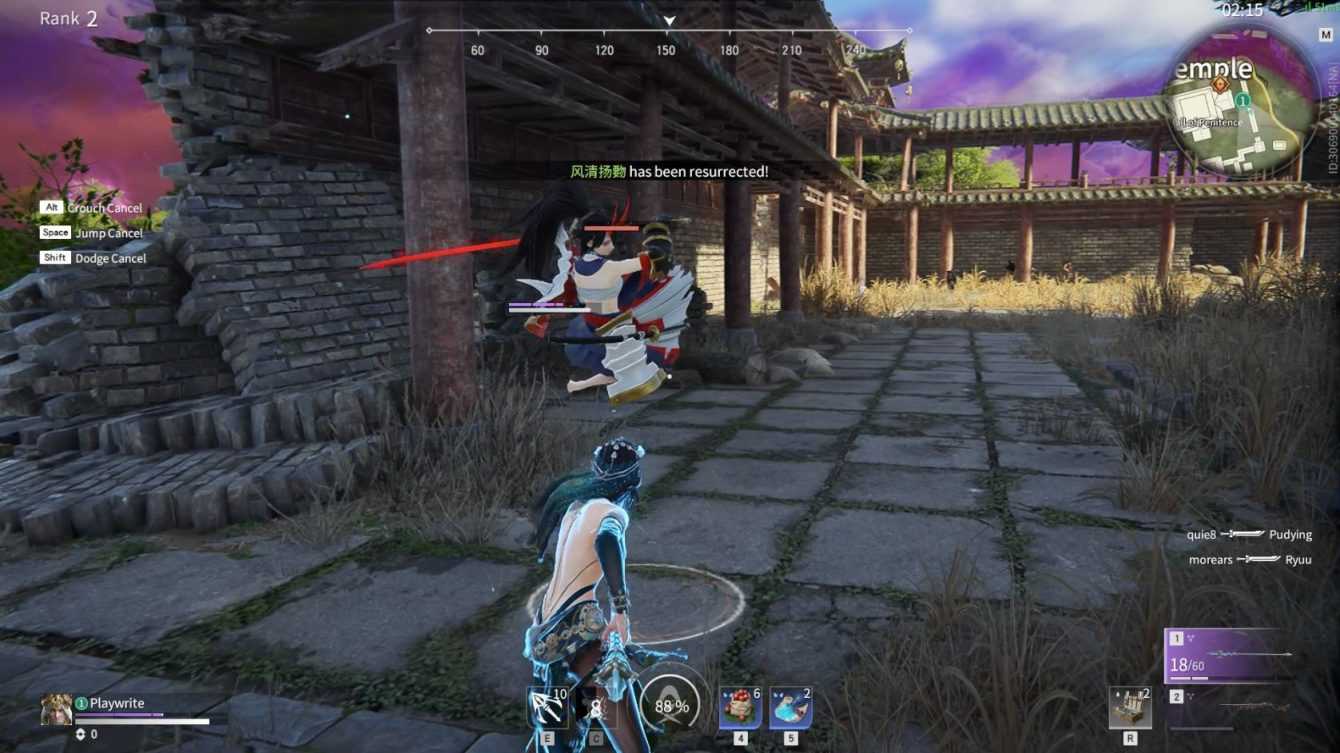 Continuing the Naraka: Bladepoint review, the only game modes present are the classiche Ranked (The Herald’s  Trieal) e Quick match, both for one or three players. We also have a called mode Shadow Surge for one player, which represents a “light” version of the Quick match, and a mode deathmatch (Bloodbath) which takes place in an arena where the one who kills the most enemies wins, resulting in a real bloodbath.

At the beginning of each game the sixty players do not land on the arena in the classic way, they will use a map divided into many clickable squares, and depending on the selected square, that will be their spawn point visible to all players. The game is at its best when you are a single player without a team, the battles are more exciting and less chaotic than three players, where you often win thanks to teamplay and attacking the same enemy at the same time. This aspect occasionally spoils the balance of the game where sometimes the amount of players beats the skill.

Outside of matches, there is a currency system consisting of Gold (paid currency), Tae Coins and Silk. Some skins can be purchased through Gold, others through Silk, and still others only through the lootbox, all this diversification of currencies is very confusing. There is also the classic free battle pass where you get other free cosmetics for all players and the paid one, with unique rewards. 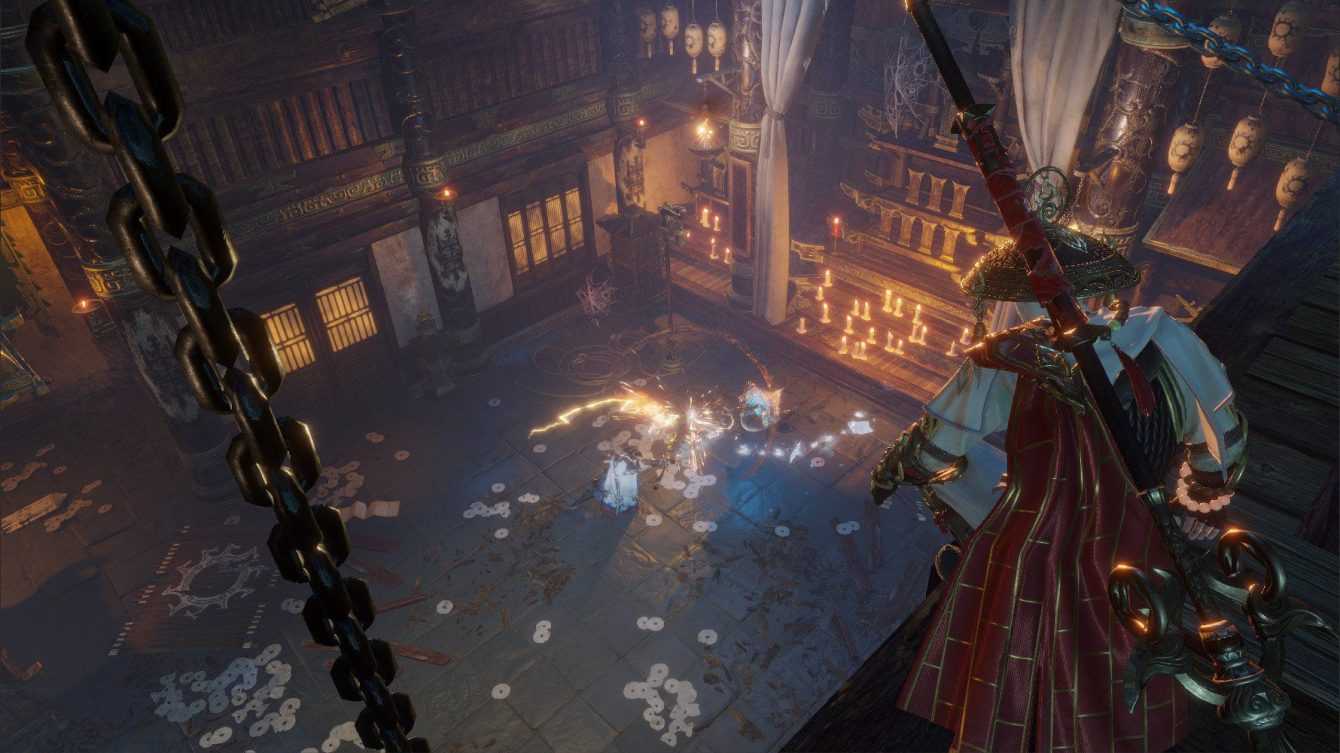 As if that weren’t enough, seasonal events are the icing on the cake, with their own currency and points system to always unlock skins, lootboxes and other rewards, all of which can be summarized as a truly chaotic and unclear system. On the one hand it is good to have all these stimuli and rewards to play, but at times it is overwhelming, especially when at the start of the game you multiple pop-ups similar to intrusive advertisements open.

In addition to cosmetics, by leveling up with your account, in the talents item you can unlock upgrades for the statistics of your characters, called Glyphs. These objects they affect various components relating to their heroes, such as cooldowns for dodging, affect the “luck” related to the loot found in the game or decrease the cooldown of your active skills. Glyphs can be unlocked and upgraded using Tae Coins.

For those not interested in delving into this role-playing side of the game, it is possible to apply the glyphs automatically without too much effort. In addition to glyphs, each character will have Cultivation Quest, thanks to which by often using a certain character in the clapper and completing his quests, the affinity will increase, getting new special moves replaceable with the default ones. 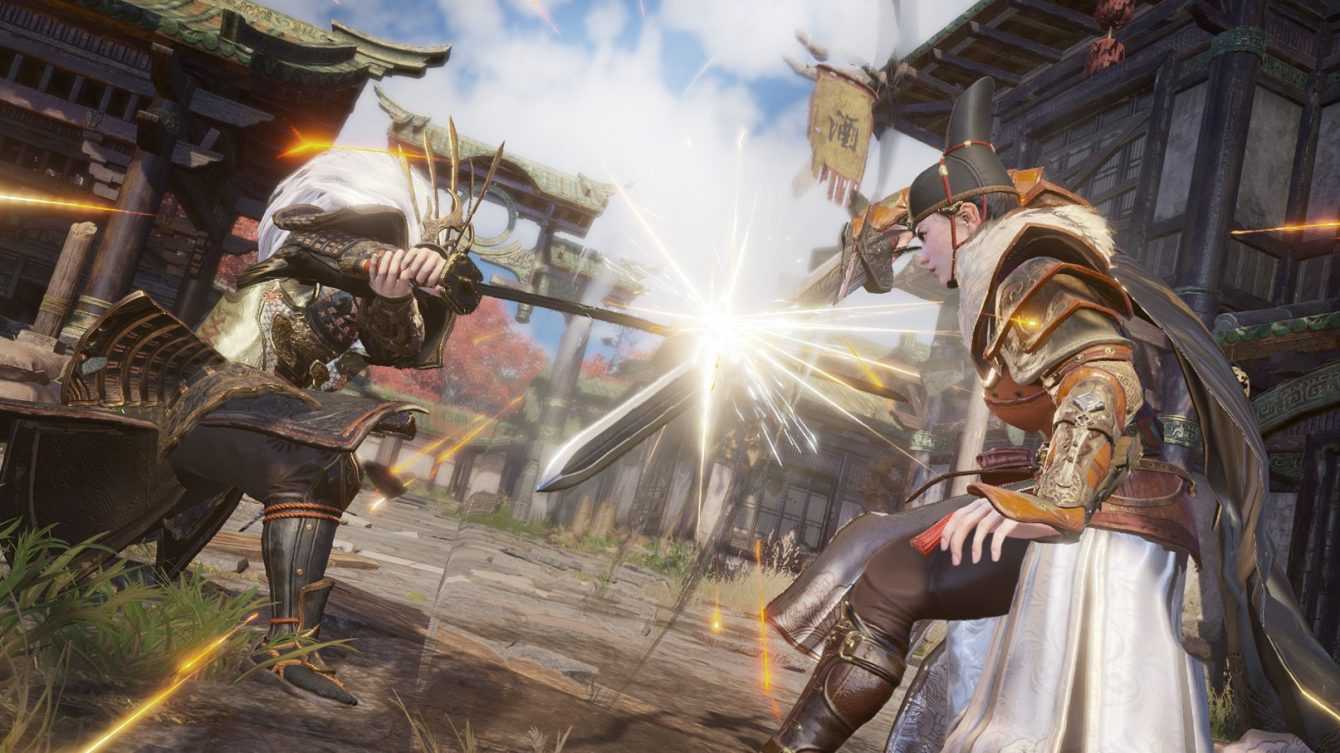 At first glance, the settings of Naraka: Bladepoint are stunning. The Oriental charm can be savored from the very first games, with well-kept temples, expanses of colorful trees and thanks to the grapple, you can reach certain particularly suggestive views. Everything is beautiful to look at but definitely not very functional when you go to interact with the environment. No type of animation for the trees or even the simple prairie, everything gives the feeling of being beautiful but fake. As for the design of the characters, the clothes of the heroes leave positively stucco and there is a greater attention to both details and animations, with a captivating visual rendering and faithful to the general artistic style.

Technically the title discovers its Achilles heel, showing major gaps in many respects. At the first start it is recommended to download the game on the SSD. This message suggests that the title already struggles to run if installed on a hard-disk rather than on an SSD. We have tested the game on hard-disk and have noticed several problems in this regard, since very slow loading of character models, including the setting of the map, ai lag and ping problems during matches.

Often the character does penetrates into the game scenario, especially during the start of the game and, as if that weren’t enough, the failure to load some textures and some parts of the game causes several bugs, all, we repeat, once the games have started. Generally speaking, one can be noted bad game optimization which fortunately do not prevent you from playing, but still create problems. 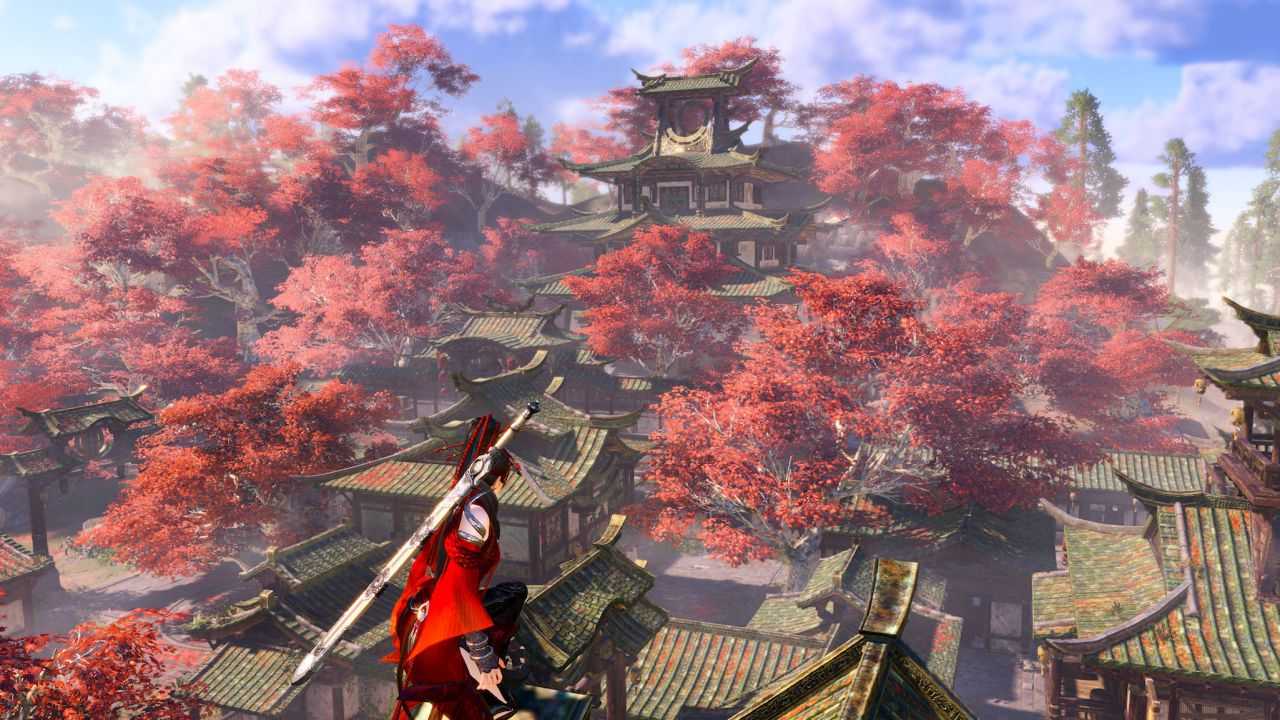 The road to the future

Our Naraka: Bladepoint review ends here and it’s time to sum it up. The game turns out to be a breath of fresh air in battle royale, has managed to keep the core mechanics of the genre by combining them with a completely different gameplay. This aspect is certainly from … 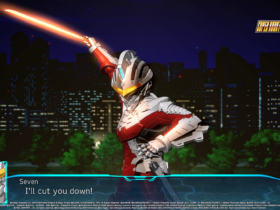 Super Robot Wars 30: the new DLC in a few days 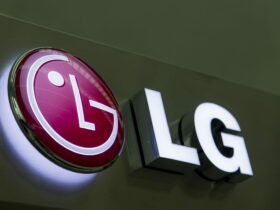 The Kids We Were Review: the vision of a memory