Let’s clarify the here-Pro-quo of the OLED model: here is the information known so far on the partial revision of Nintendo Switch

For years the manfrina of Nintendo Switch Pro goes on, but the Big N never does what we would expect and therefore, in conjunction with the release of Metroid Dread, October 8th we will have a new one model OLED for the hybrid console. It is a model with a larger than standard 6.2-inch LCD screen, more powerful speakers and a better kickstand, as well as other new features. Of course, the hype of those who expected a (we would suppose non-existent, by now) model “Pro” went to bless, but this does not prevent us from dedicating Sunday to a general review (with all due respect to Music & Video Games).

Nintendo has confirmed that the price of the Switch’s OLED model is on 350 euro, and the description speaks of the vivid colors guaranteed by the new 7-inch OLED screen. In addition, the new dock (which can be purchased separately, but at the Grande N site) offers an ethernet port, while the console’s internal memory doubles compared to the base model by switching da 32 gigabyte a 64. Official cases will also be made available, while the table setting game will benefit from both the improved kickstand (in width) and the usual Joy-Con versatility.

In other words, therefore, the rumors about the “Pro” were nothing more than hot air, if we do not count the backlash of insider Jeff Grubb that we will mention at the end. We’ve been talking about it since January 2019, yet in the end the improvements are the 7-inch OLED screen, better speakers, an ethernet port in the dock and that’s it; no nudge to power. In principle, if we count that the Joy-Con are the same and that they are now simply available in a new variant bianca (if you choose the model with the white dock; otherwise, blue and red “mismatched socks” even with the new model), the console is more addressed to those who still do not have Switch.

Let’s move on to the flab, starting from the OLED screen of the new Nintendo Switch model. The resolution in portable mode is always 1280×720 as for all the versions seen so far, but the new screen technology brings with it all the benefits you already know if you have a smartphone with this type of screen. If not, in short the lighting is spread over each pixel. In other words, therefore, each pixel is illuminated individually, resulting in more vivid colors and better contrast as far as the image is concerned. If you don’t care about the screen, Nintendo itself invites you to let it go.

Of course, OLED technology also allows the battery to last longer: energy is not “wasted” in lighting areas that do not require it. That said, the battery itself is the same; it is only used better. There time estimated, based on various factors such as play, lighting and so on, oscillates between four and a half hours as a minimum and nine. According to the estimates of the Kyoto giant, the greater power required will not be a problem: the distribution of the lighting on each pixel will benefit the extra inches. We can only hope for optimal efficiency, sooner or later … 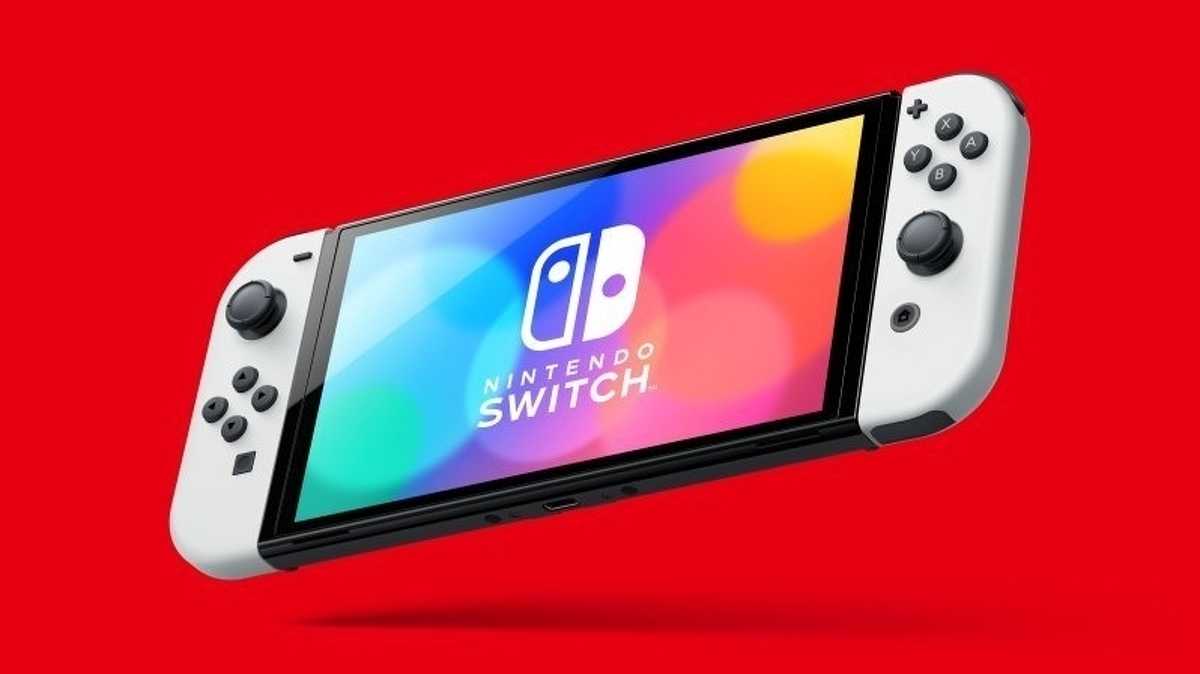 Extremely versatile controllers with ultra-fragile levers, i Joy-con, are also the same with the Nintendo Switch OLED model. The good news is that you can use the new (and admittedly, pleasing to the eye) white Joy-Con with the old models. The bad news is that the levers, when they see fit, can still start slipping like bars of soap on a sheet of ice. However, remember that, in all this, if you prefer black to white, nothing prevents you from taking the model with the black dock, including the blue and red Joy-Con. Be careful not to get confused, though! 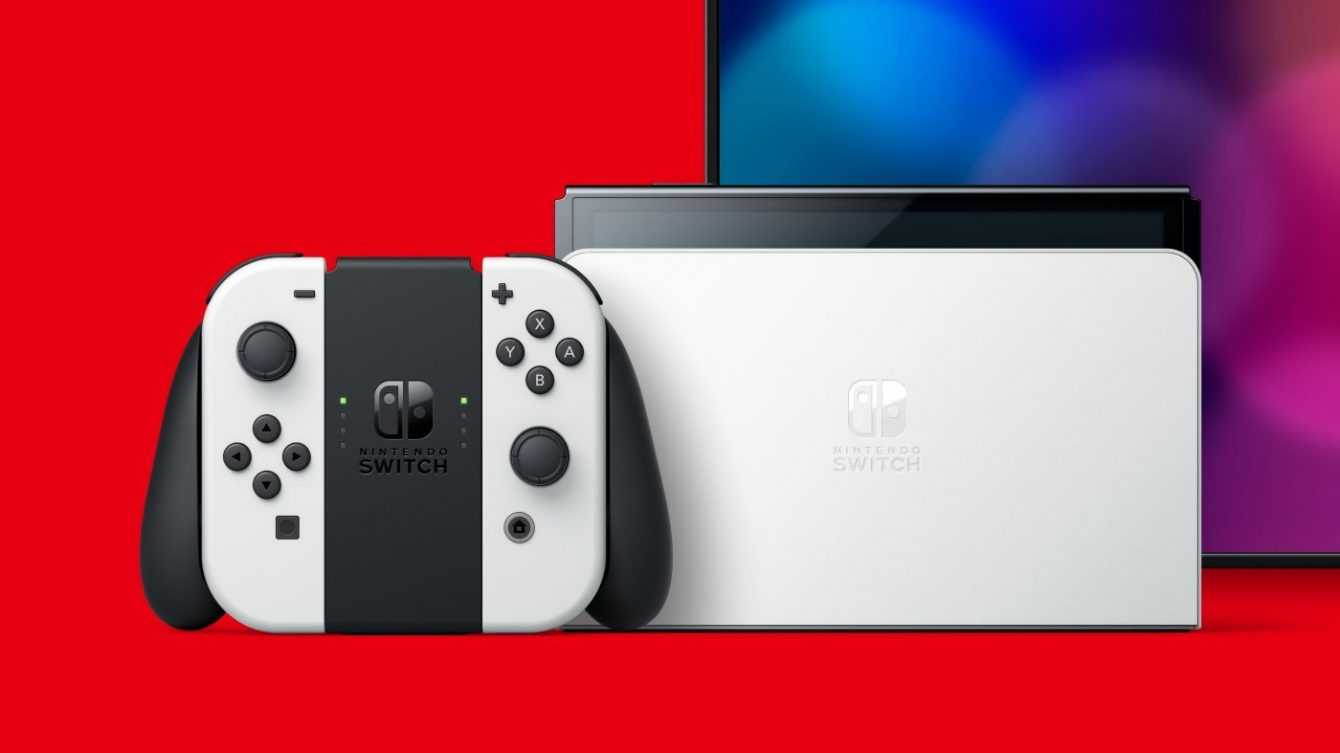 The dock of Nintendo Switch received a welcome redesign with the OLED model. The biggest novelty, however, always remains the port for an ethernet cable to avoid going through the LAN adapter. As with the Joy-Con, the new dock is also compatible with the base model of the console, as long as you purchase it separately at the official Nintendo website. If you wanted a white dock, then, the time has come… or rather, it will arrive in mid-autumn, on October 8th. 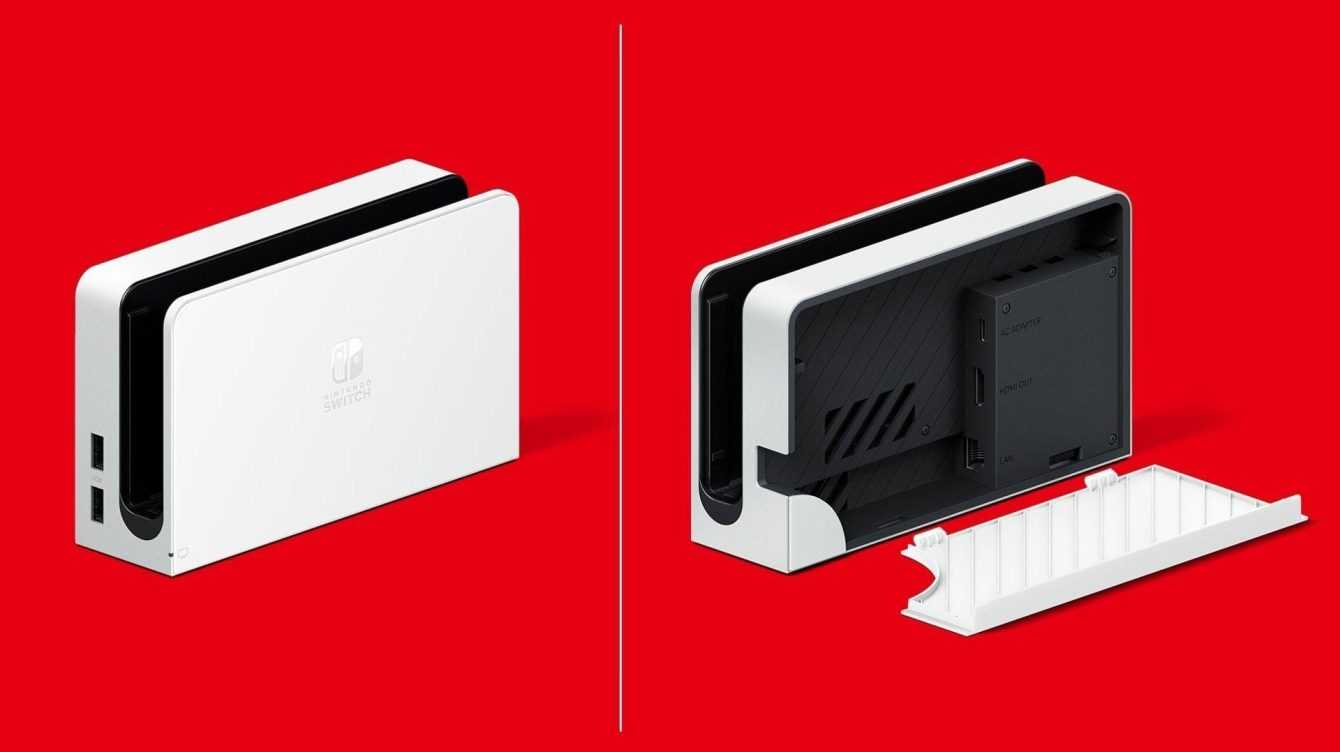 You can see below a summary printout for the technical specifications of the Nintendo Switch OLED model.

And what happened to the Switch Pro?

Some of the rumors heard over the past year hinted at the new model’s features, including a better screen and kickstand, as well as an ethernet port in the dock. However, what happened to the 4K output and the increased power? According to the always talkative insider Jeff Grubb, we don’t talk about it untilnext year. Clearly, the Big N is working on new hardware all the time, and we will only know more in due course; there was COVID-19 involved, we would like to remember. Grubb, however, also reminds us that the Kyoto giant has placed no less than six variants of the 3DS on the market. We gladly leave you to the tweet, but for today we finish here.

I still have only ever personally heard 2022 for a Switch Pro. And if that still happens, I’ll continue to speculate that will have 4K output with a significantly more efficient chip with DLSS.

Anyone think this is the last Switch from the company that released 6 3DS models? https://t.co/TuJJGucDdc

Now it’s up to you to tell us yours: what do you think of the heap of information? Let us know below, and as always don’t forget to stay on TechGameWorld.com for all the most important news for gamers and more. For your purely gaming needs, you can instead find the best discounts in digital format on Instant Gaming.