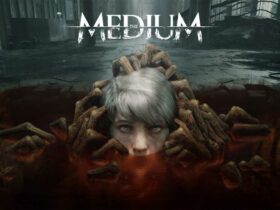 The Medium Review: It all starts with a dead girl

Let’s take a step back in time with the beautiful 3D platformers of some time ago, but let’s “season” them with the right splash of modern and some more secret ingredients. So here is the review of Pile Up !, a curious game that knows how to capture attention

Who grew up in the much vaunted the nineties, we know perfectly well about the “revival”Of this period, he knows perfectly well that the games that were most in vogue were essentially two. The 3D platformers on the one hand, with the various Super Mario 64, Crash Bandicoot, Spyro and company, and the strategic ones on the other with mammoth titles such as Age of Empires, the first Warcraft, Heroes of Might and Magic and so on.

Apparently both are winning the challenge with time because, for example, we have seen not a few remakes and sequels (to you the opinion on Crash Bandicoot 4, Super Mario Odyssey, MediEvil etc.) and announcements regarding new chapters for so long. expected as the fourth of Age of Empires.

But the nineties are long over and we are in a much more colorful and defined world even if games like Minecraft have been able to question this view of things. Another recent title that has been able to bring back the glorious past of platformers, included curses in Aramaic and more “pucciosi” moments, is definitely the new title of Seed By Seed So here it is Pile Up! review 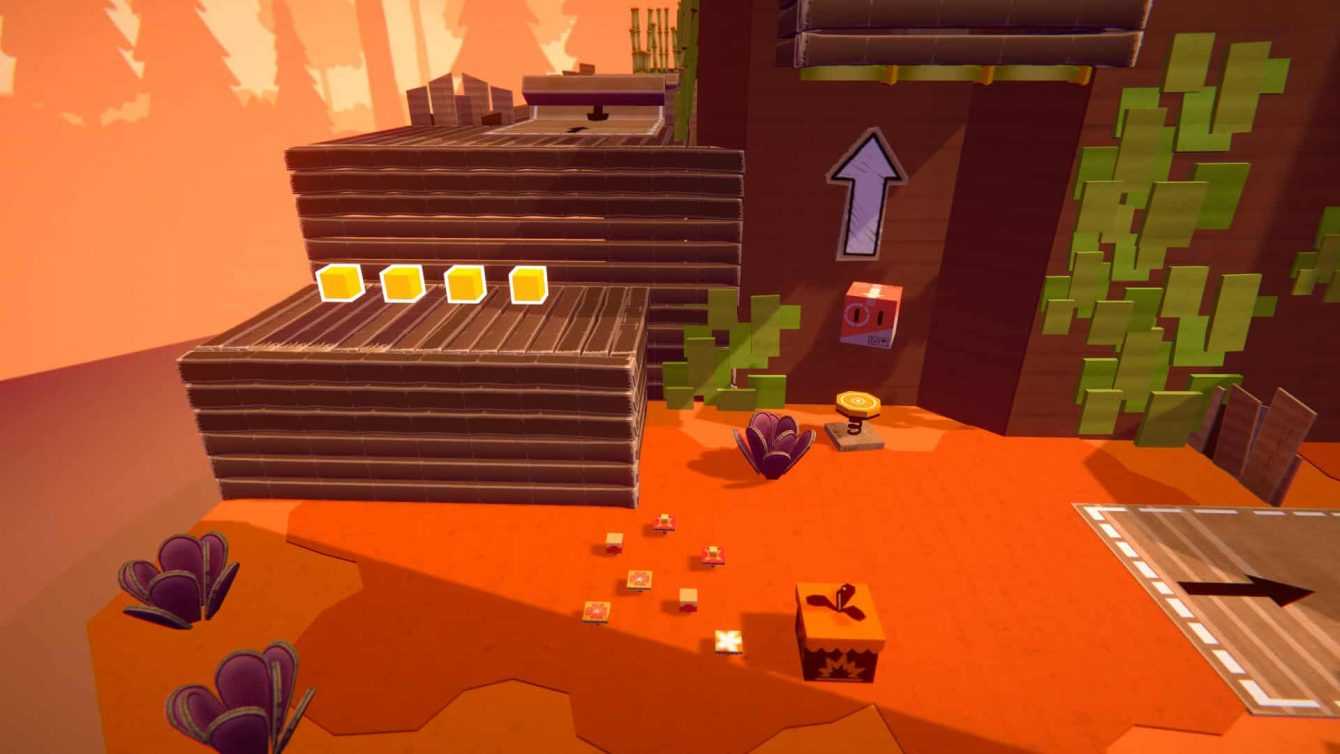 Just another box in the pile (up)

The game in question comes from neighboring France, to be precise in the city of Angoulême, and is a work for PC, PS4, Nintendo Switch e Xbox One signed by the young independent team of Seed by Seed. The team, born as a school project in 2018, is then supported by one quite interesting philosophy that will not fail to bring out a smile and some old memory that we thought was lost.

In fact, the guys from Seed by Seed, firmly believe in moments of sharing, plants and “handmade” video games. Not for nothing have they then stated that they have decided to combine all this to create friendly and fun games capable of breaking down borders between people and have fun all together.

This was our main intention: the promise of an adventure to be shared with up to four people, a casual game that could bring the whole family, children and parents together, in a fun, playful and non-violent space.

From the early hours, but maybe it’s better to say minutes, this feeling is felt perfectly and you are wrapped in one much more childish and innocent fantasy that lulls us with laughter and snacks made on the lawns. 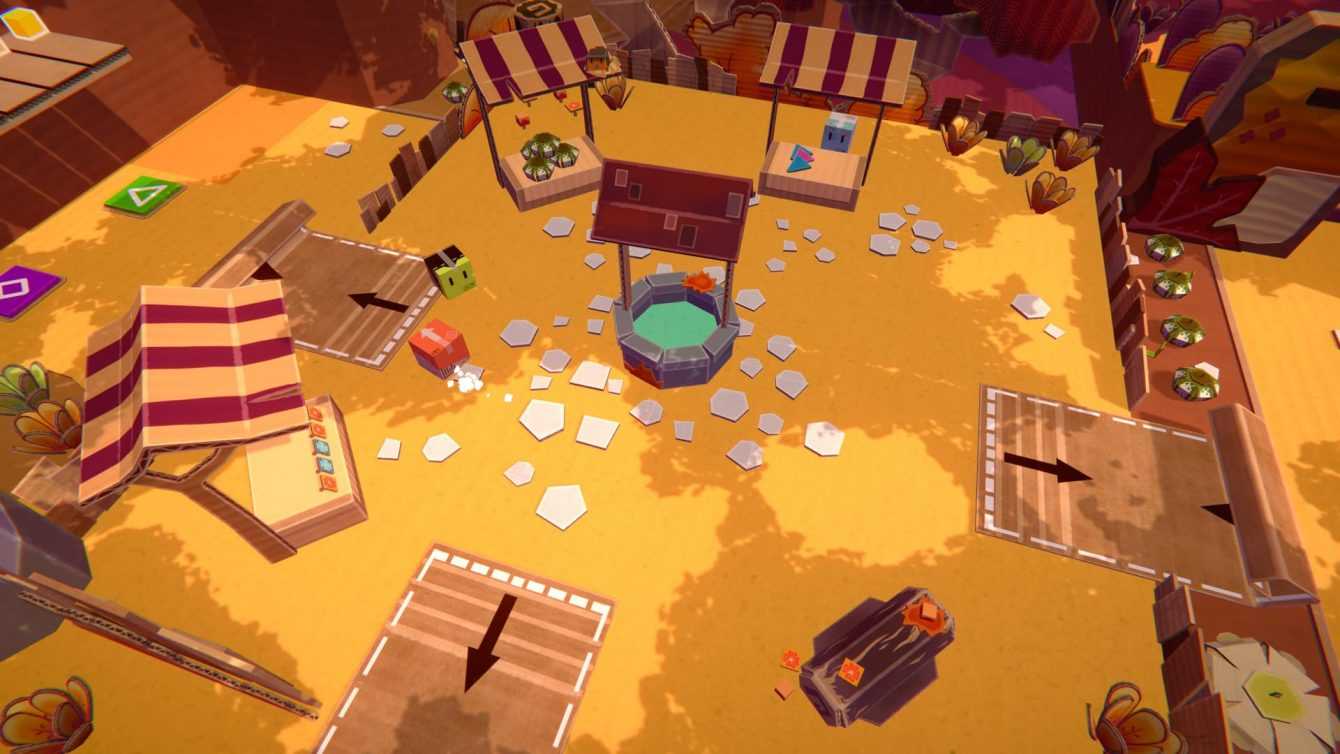 A History of Boxes, Cartons, and Duct Tape – Pile Up Review!

Did any of you know the “parallel-like” saga of our favorite mustachioed plumber, Paper Mario today culminating in Paper Mario: The Origami King? Here this was one of the very first connections that came to mind as we rehearsed Pile Up! in view of the review. This then also came to mind something like “the Amazon parcel game”, But let’s not digress. That’s right then, the protagonist of our story is a box as well his world is made up of cardboard, adhesive tape and basic origami.

The scene opens with a scenario made of cardboard dove the boxes are its inhabitants. In this cheerful and peaceful world, which as in any good platformer is a unique environment with connecting portals for all other levels, something interrupts the peaceful existence of its inhabitants.

A sort of darkness envelops everything, has someone said “The Neverending Story” ?, and leaves no one left but our little box that will have to to collect small boxes, rolls of adhesive tape and keys to finish all the levels and help her little friends. 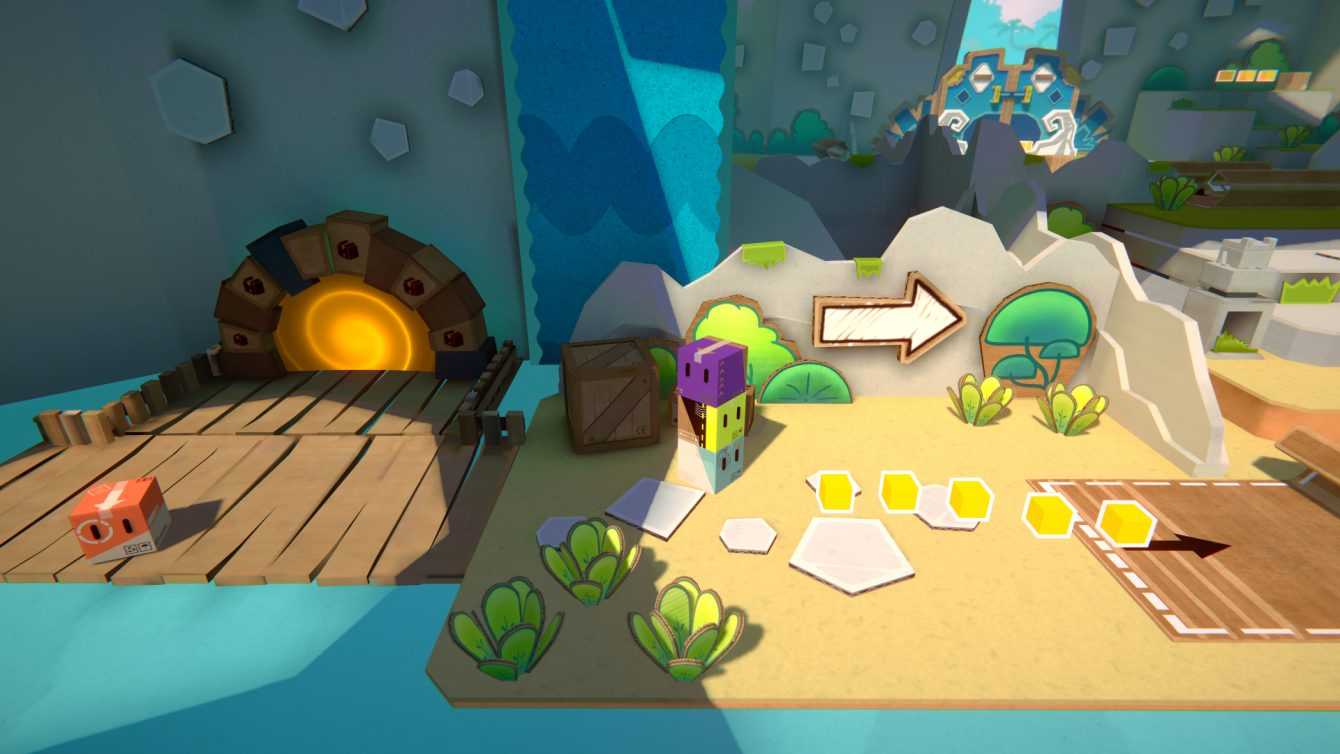 Box by box – Recensione Pile Up!

Accompanied by a very relaxing and apt soundtrack, we will therefore venture into levels of physics and colors that distinguish the game in question (we know that the color dungeons were already there at the time of The Legend of Zelda, but allow us this poetic and videogame license).

First of all let’s start by saying that, even if you can play safely alone and with the help of the sole keyboard, it is very advisable to use a controller not to “go crazy” too much e play together with one or more friends to find together the solution to the various small puzzles scattered around the levels. The latter are really one scala which starts from the lowest step of the tutorial up to a top made of other boxes and areas to keep in mind to progress.

Our box will have to in fact skip and stack other boxes (you go from the more “simple” cardboard ones to get to the trampoline ones, the sticky ones with a frog’s tongue, the explosive ones, the flying ones and so on) to reach the key at the end of the pattern.

This key, often and willingly, is in the possession of one of the other creatures that populate this world such as, for example, frogs, porcupines, bats and similar. Furthermore, these characters will not speak, but will limit themselves to expressing themselves through comics with drawings that explain what they want us to do.

Accumulation is its core and the main challenge is not about execution skills, but the team’s ability to organize and achieve a common goal

That said, our box will be able to perform relatively simple actions like jump, stack, grab and split the other boxes. Nothing more, nothing less, but know that it is not all as simple as it may initially seem. Aside from a certain amount of patience that should never be missed, particular attention must also be paid to the cardboard areas. They indicate two directions to take, but if you are in front of those printed on thetrash can icon, then, any box that is being transported will be lost.

In this case, the“room recharge” option which allows us to put the situation in order a little and proceed in another way. Trust me, you will use it as we did. Furthermore, once each level is completed, the world will go to color a little more and the portals will open to reach the other worlds and go to the bottom of the mystery. 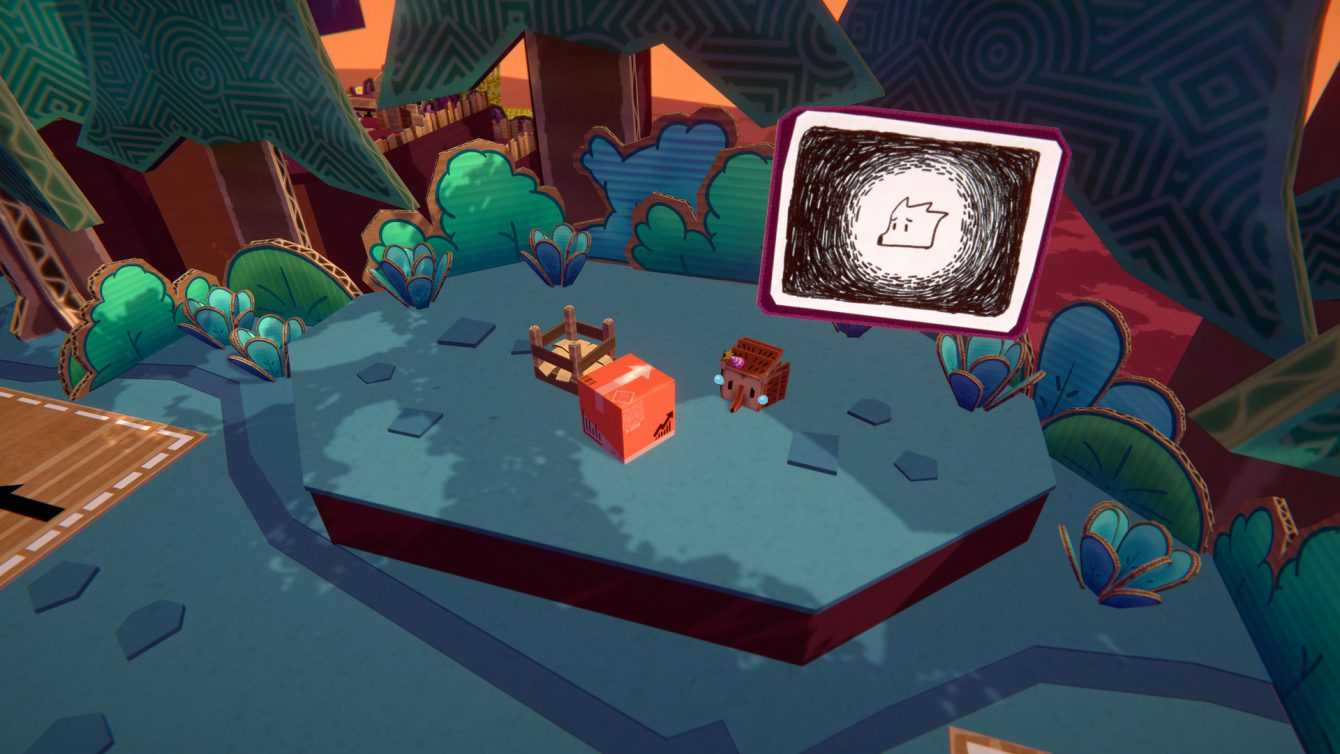 As many games teach us, and Fortnite is among them for better or for worse, personalizing your character is important and fun. Here, unlike many other more famous titles, however, there will not be a hand to the real or virtual wallet, but only to collect enough boxes to change the skin to ours.

Collecting some enough around the levels we could therefore choose whether to give our protagonist box the shapes of a piece of sushi, of a’ape, of a aircraft pilot, of a watermelon, of a robot and so on.

So who said that a box can’t be fun? Ask the cats or try to remember the time when you were children and a simple cardboard box from the supermarket could become anything you wanted. From a hut to a spaceship, the only limit was our own imagination! 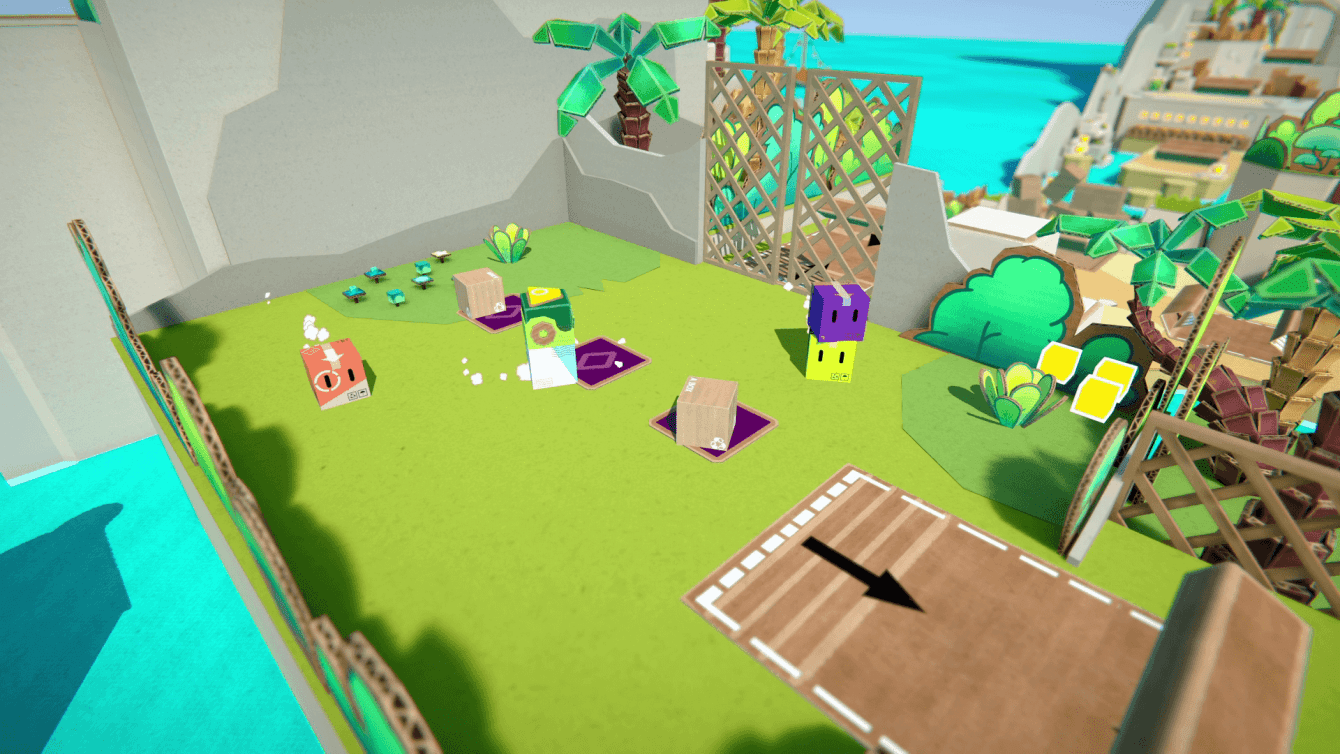 The more the better – Pile Up Review!

Be the cooperation is one of the keys to the game, this philosophy of Seed by Seed it becomes especially true in several moments. In fact, both a Boxling Square where we choose the worlds to visit that in the various levels, we will have the opportunity to play mini games for two or more participants. These then, just to have a touch of retrogaming, will then have the shape of those dear old men cabin cruisers from the arcade. A rather good choice, no doubt about it!

In short, we can safely say that it is the game itself that “tells us” to dedicate ourselves together with friends or family. In these times of social distancing, colored areas and masks therefore there is not only Among Us.

Let’s sum it up a bit

So here we are at the end where we can tell you that the title really surprised us positively. Although it is a game suitable for both casual gamers, which ai children and theirs families, it will still be able to make you entertain and relax Like never before.

Of course, there are times when the levels will test your patience and it will be required too some dexterity with the controls, but as they say in these cases “the game is worth the candle“. In conclusion, if you want to try it too this title at the right price, we advise you to click here, while, to keep up to date on the video games of yesterday and today, stay with us on TechGameWorld.com!

When one box leads to another