The nice thing about writing one review for the port of Quake its Nintendo Switch is the challenge behind this article. For the writer, in fact, the comfort zone consists more of the round and cloying realms of the Big N, with previous experience in platformers, role-playing games (action and otherwise) and the occasional deviation. The first person shooter, on the other hand? Beyond the four classic DOOMs, the re-release of Duke Nukem 3D, His Majesty Serious Sam Collection and meteors like Bulletstorm, SUPERHOT and Screencheat, nothing appears on the hybrid console of the undersigned.

Providing a pinch of spice provides a pure rookie playing experience. You may be wondering what effect arriving “virgins” has at the first launch of Quake in 2021. On this suspiciously specific question, we can give you a satisfactory answer: if this is the effect that the game, a priori in great shape, has nowadays then the real question to ask is how much revolutionary was the spiritual successor of DOOM in the now distant 1996. If imitation is the most sincere form of flattery, the first Unreal Tournament could not have had a better muse.

In review, the good old Quake gives us the pretext of plot as basic as possible before putting our Nintendo Switches on fire. If you want the short version, just replace the Lucifer gang in early DOOM with an antagonist (the eponymous Quake) more inspired by the novels of H.P. Lovecraft. The long version also extends a little further, if we want, but there is no need to dissect a canvas when we are already doing the same with the enemies, between a superimposed advice on how to continue (everything in Italian) and the other. Not that we mind it: here we live (and camp) like this.

Rather, it is on development that things get interesting, on several different fronts. All this was born, in the 90s, from the idea of ​​moving to role-playing games inspired by Norse mythology (which, with DOOM’s reigning heavy metal, never hurts). Of that original idea, only the gothic settings remain, a perfect counterpart to the usual space base, and Thor’s Mjolnir that peeps out from time to time. Returning to the present day, and returning to our previous review, we also know that the youtuber Modern Vintage Gamer participated in the development: excellent premises, given his work with Shantae.

Give up all hope (of getting bored), O you who enter – Quake Review for Nintendo Switch

Let’s leave out the attract mode of DOOM-bait memory for a second and move on to the first moments of gameplay, where in the review phase the Nintendo Switch version of Quake made us nod. In fact, even before firing a shot, by choosing to start a new game we were greeted by the choice of three corridors. One of them, corresponding to the easy mode, is the shortest. The second is instead a little longer. The flash of genius, then, with the highest difficulty: a lava moat to be waded with a jump in order to access the teleport. Getting a smile out of a reviewer in such a short time is not for everyone.

From there, the frenzy soon takes over: becoming familiar with the controls, especially for those who have been a little “spoiled” by Wii, is a matter of seconds. There is the possibility of deactivating the motion controls, otherwise enabled by default on the Switch, but in principle the clear feeling of having in front of a DOOM counterpart in which you must also raise and lower your gaze becomes tangible . Unsurprisingly, this feeling is very pleasant. Level design can be labyrinthine like that of its predecessor, but it rarely bothers. 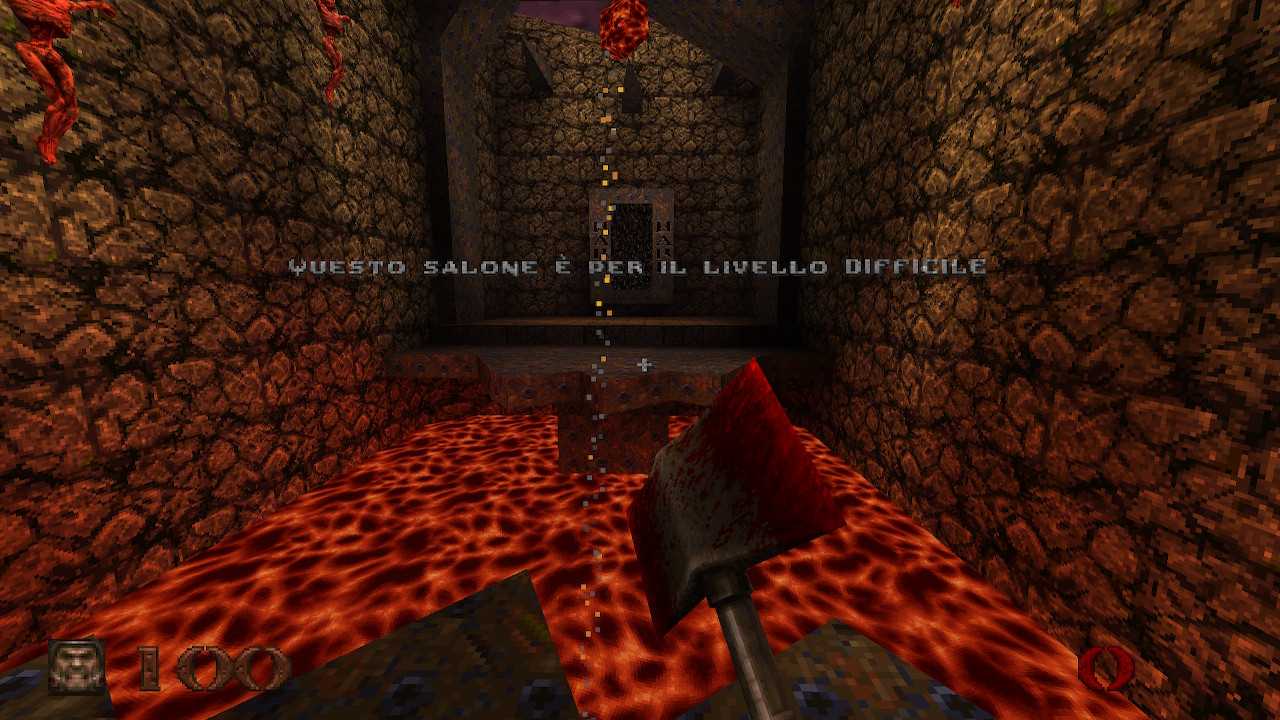 We usually reserve the technical sector of a title the final lines of a review, but in the case of Quake we really have to allow ourselves a small exception. While titles like the Crash Bandicoot and Spyro HD trilogies have watered down the term a little, this is a remaster in full swing. In other words, therefore, there is nothing grainy (Quake 64 themed add-on apart, but we’ll get to that), which in a game where you need to aim never hurts. However, the collaborating development teams didn’t stop there and went even further, indulging in the options menu.

There really is everything. No, let’s not joke, of everything. Try to list something and you will see that it is there. More or less defined textures? You can choose. Anti-aliasing? Here I’m. Motion blur? Yes sir. Dynamic lighting? They are also ready to complement a great atmosphere. Because in the end it is mostly about enhance a premise that is already winning from the start. In this respect, therefore, we could easily treat this port as the definitive version of a great classic. This is not rhetoric on our part: these hands played the title for the first time until recently, on the other hand. 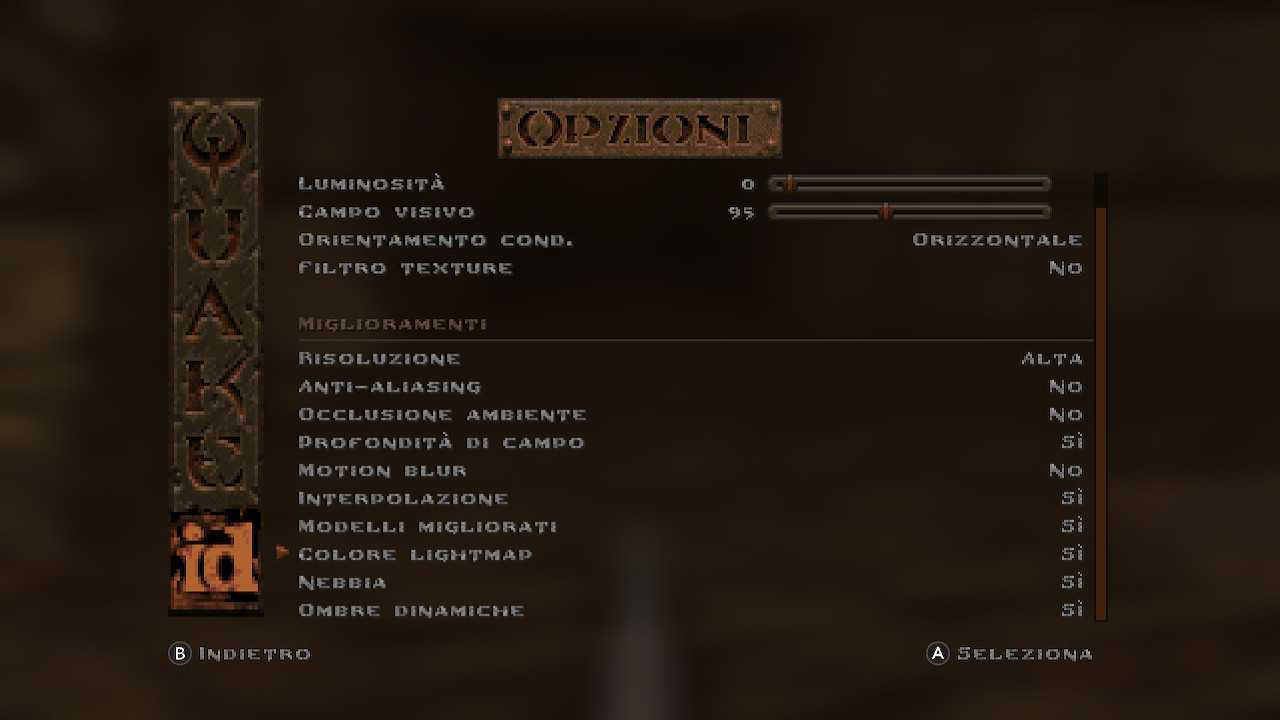 Who does not shoot in company, is either a thief or a spy – Quake Review for Nintendo Switch

Just missing a “catch the flag” to contribute to the completeness of the Nintendo Switch version of Quake, but it is not excluded that Bethesda corrects the shot even after the review. The multiplayer of the game is something simply phenomenal for several reasons. The two modes present (so far), divided between online and local, are the deathmatch and the cooperative. You can already imagine how much fun a session in co-op: this component enhances every game regardless and certainly a shooter with a very rich campaign cannot be an exception.

The deathmatch follows the rules for which the term is known: the first to reach a certain amount of kills wins. In a Mario Kart 8-style scenario (Wii U version), battles mostly take place in the main adventure levels (with exceptions such as additional campaigns and their arenas, see below; more on that later). However, in a bizarre twist, the intricate level design allows players to improvise strategies based on the weapons in their possession, setting up possible ambushes from every angle. We can’t even speak ill of online: contrary to other ports castrated by different catchment areas, Quake’s one supports the cross-play. Academic kiss here too, then. 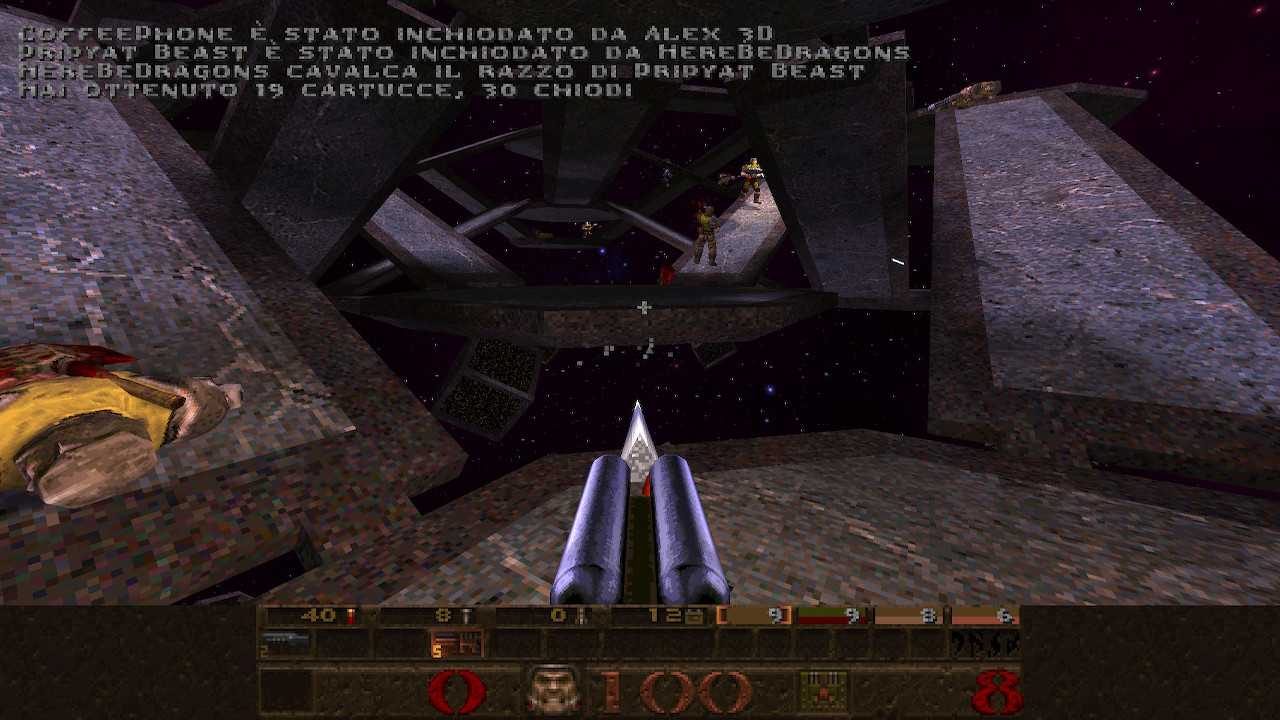 Remember that three-way crossroads we alluded to at the beginning? Before catapulting us into the action, the game asks us with a second hub to which one countryside We want to play. There is no expansion that is missing: after the “simple” Quake we also have Scourge of Armagon, Dissolution of Eternity, Dimension of the Past and the unreleased Dimension of the Machine (best for variety, see above and below). All this is then added to the possible add-ons, which if we really want to find something to turn up our noses (but not so much) require a Bethesda account. Among the first mods available we have the already mentioned Quake 64, complete with a cathode tube filter.

The screenshots you see here really don’t do the actual product justice – once you get started, you’ll understand. After such a lavish meal, asking for the bill positively surprised us: you don’t need to pay more than ten euros to do just this classicon. Like Anton Ego at the end of Ratatouille, therefore, we ask to be able to compliment the cook. We are told to wait, and in the meantime we bask in a target and the other (they are also present, yes!). Finally, trying not to compromise our impartiality, we look for a flaw. And, failing, at the sight of the possibility of having too the classic interface with a smile we bang our heads on the table. 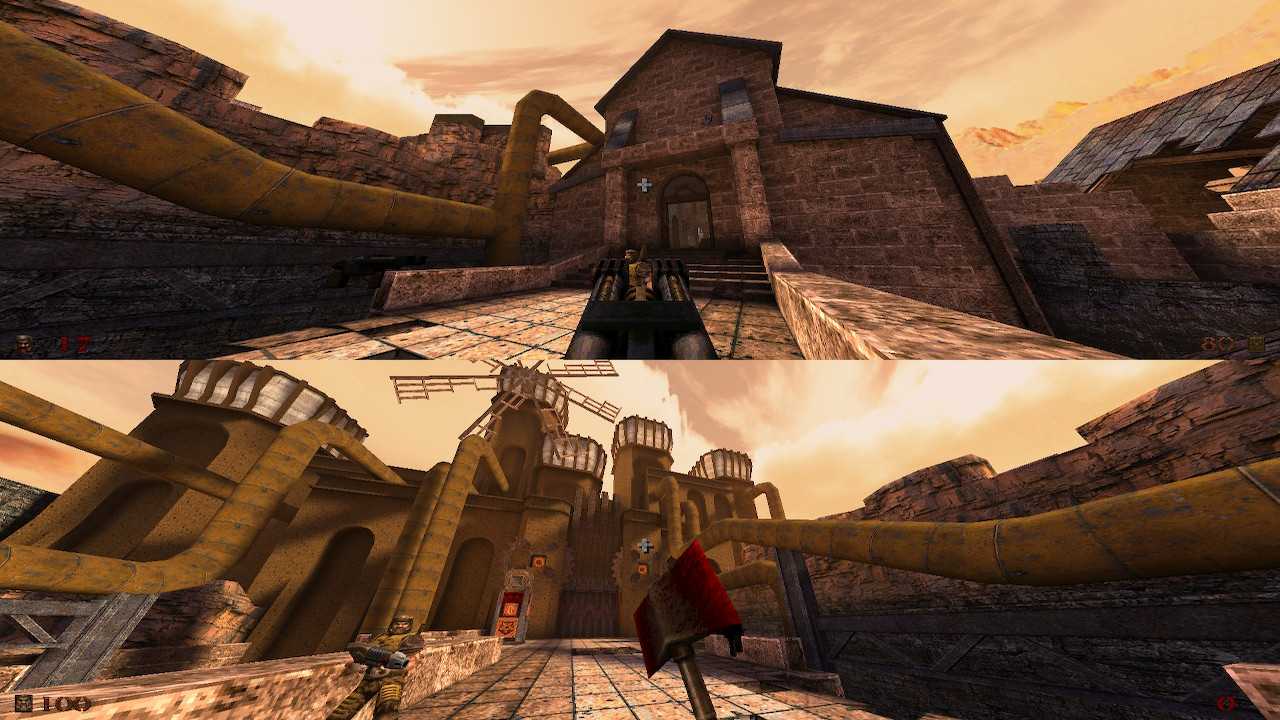 The Nintendo Switch version of Quake is the classic case in which it is better to cut it short and rather move on to the final verdict of the review. We are happy to draw our conclusions on the presentation starting from graphics. We can enclose our analysis in a practical summary: reviewing the sprites amalgamated with the proto-polygonal soul of DOOM, in the case of the latter, is still a bit of an eyesore today. Quake, for its part, corrected the shot with the use of 3D models across the board. The result, in 1996 as today, is exactly halfway between Wolfenstein 3D and the first Unreal Tournament, a perfect middle ground for which the undersigned has a soft spot.

We haven’t talked about the sound for a reason, or a gem. As a lover of DOOM that he is, Trent Reznor of the Nine Inch Nails he took care (for free!) of the soundtrack. His is also the voice of the protagonist (canonically called Ranger), from hops to grunts of pain. You might know him, just so as not to make our mention of Ratatouille an end in itself, for composing the soundtrack of the most recent Pixar film, Soul (and giving the name to the Super Mario World / New Super Mario Bros. 2). His pay was therefore the satisfaction of having set the game to music, in addition to the NIИ logo printed on all the ammunition of the nail gun (“nail gun”, in the case). If this isn’t passion! 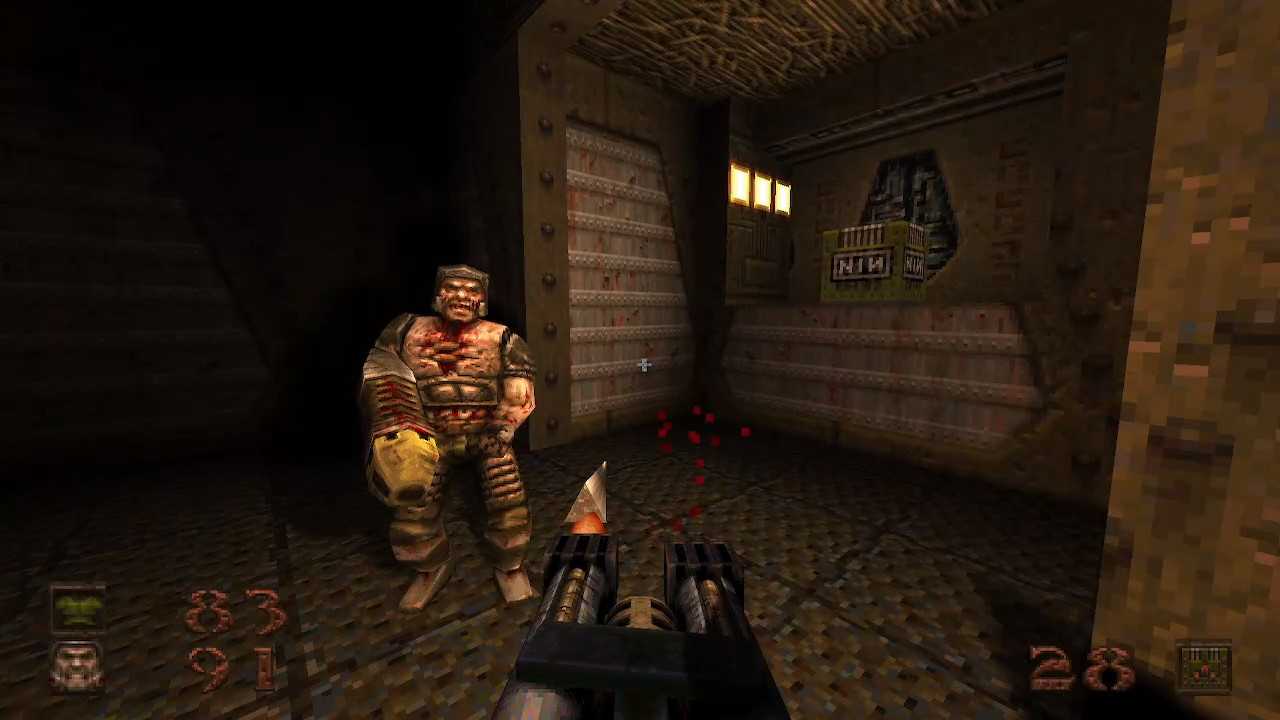 It displaces us not a little to see that the game was the protagonist of a shadow drop during the last one Quakecon, because the Nintendo Switch version of Quake is an incarnation of that we cannot recommend enough to players in a simple review. The only flaws that would come to mind would be the need for an add-on account, the poor marketing received by the game, and, if any, the potential niche appeal. On the other hand, it is a 1996 shooter, and we can understand if in the face of this the newcomers of the genre are still undecided. Then we said “no, Quake is for everyone”.

Until the release of this title, our (well, more than myself) idea for an ideal first shooter on the hybrid console was Serious Sam Collection. Now, at a third of the amount that the Croteam trilogy asks for, the triumphant return of Bethesda and Id Software easily oust it. Whether you are a shooter fan or not, whether or not you are inclined to give a nineties title a chance, don’t expect anything from Quake outside of Lovecraftian atmospheres, heart-pounding action and lots and lots of fun. And for any title worthy of the presence on the platforms of the Big N you can not ask for anything less. 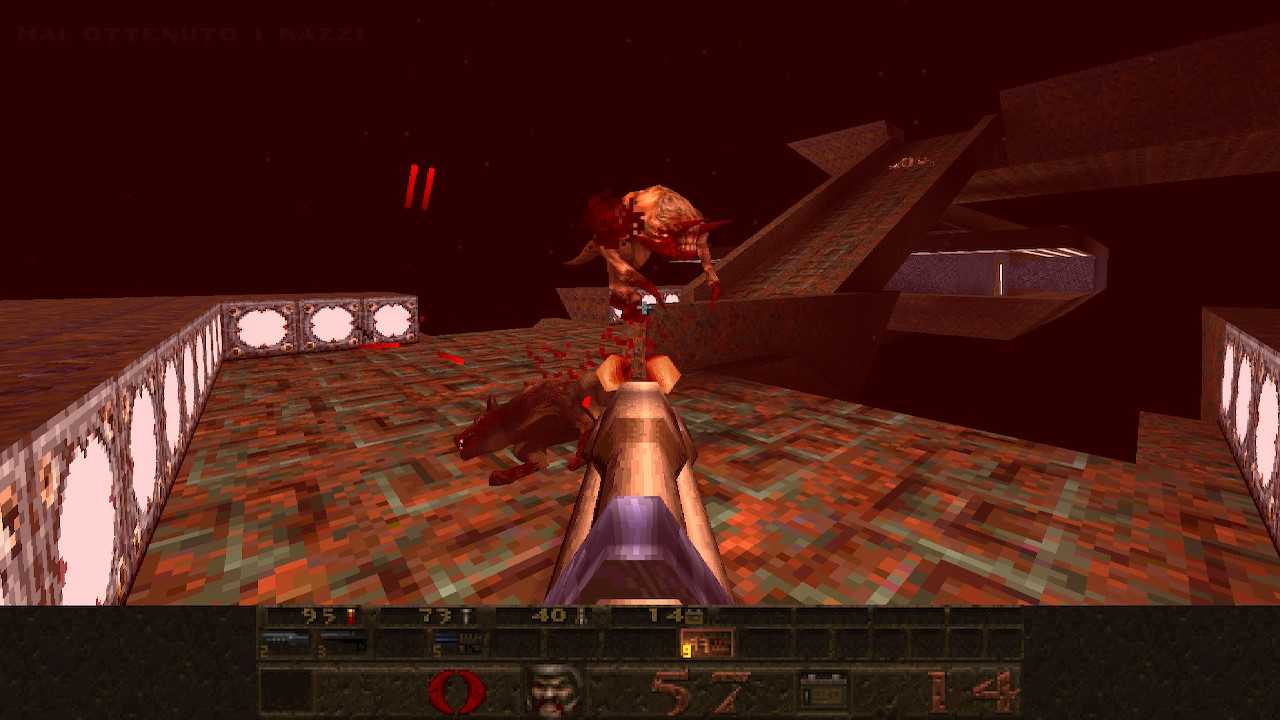 This was what we thought. But what is your opinion? Tell us below, and as always do not forget to stay on TechGameWorld.com to read other reviews and get all the most important news on the gaming sphere and beyond. For your gamer needs, you can instead find the best discounts in digital format on