Razer (here for more info), the global leader in lifestyle gaming, has made the RazerCon 2022 a phenomenal event for gamers around the world. On October 15th, viewers tuned in to watch the CEO at Razer Min-Liang Tan talk about how Razer will change the future of mobile gaming. In addition, more exciting upcoming products and new exclusive partnerships have been announced.

Being truly a “For Gamers, By Gamers” event, Razer worked closely with partner publishers and developers to present exclusive content. Hidden Leaf Games exclusively showed the world premiere of Fangs gameplay, while PC Builder Simulator 2 was live streamed by RazerCon hosts Rich Campbell and Cyr of the OTK network.

Continuing the tradition of zero-emission streaming, the RazerCon 2022 was powered by “green” energy, in line with the brand’s commitment to safeguarding the planet. If you missed the event, you can see the recorded version here.

All upcoming launches unveiled at RazerCon 2022

At the RazerCon 2022the community got a preview of many of the upcoming product launches Razer. Among these the Razer Edge 5G latest generation Android gaming handheld and the premium gaming chair Razer Enki Pro Automobili Lamborghini Edition. And even more Razer audio options for PlayStation and Xboxan update of the line Razer Kraken Kittyand much more.

RazerCon 2022 also saw exciting collaborations with partners in attendance, including a limited edition with Displatethe #ReelGaming campaign with Facebook Gaming. And again, a personalized guest table with Twinkly Squares and a live PC assembly with Starforge Systems with the new 13th generation Intel CPUs. To ensure a long battery life for hours and hours of gaming, the Razer Edge has one 5000mAh battery. Available in version Wi-Fi o Verizon 5GRazer Edge will initially only go on sale in the US market and comes bundled with the new one Razer Kishi V2 Pro. Equipped with all the technologies, customization options and functionality of the Kishi V2 mobile controller, with two additions: Razer HyperSense advanced haptic feedback and 3.5mm audio port. Microswitches in the front buttons and D-pad provide tactical response and instant activation for console-quality controls on a portable gaming platform.

Razer Edge Wi-Fi will be available in January 2023 for $ 399.99 exclusively on Razer.com and RazerStore.

All included in the box, these adorable ear designs are quick and easy to replace, so streamers can change styles and express their personality and passions on video. All three ears are able to react in real time to streaming events, thanks to the more than 16.8 million colors and countless lighting effects of Razer Chroma RGB. With these expressive customization options, streamers can make their content stand out even more and engage their viewers. With auricle lighting that reacts to emotes, alerts and more.

Equipped with a removable Razer HyperClear cardioid microphone for crystal clear voice acquisition. As well as Razer TriForce Titanium 50mm drivers with 7.1 surround sound for high fidelity audio and greater precision. The Razer Kraken Kitty V2 Pro headphones have perfect sound. Thanks to the hybrid textile and leatherette padding, they offer all-day comfort and noise isolation for total concentration. The Razer Kraken Kitty V2 Pro will be available for pre-order in the fourth quarter of 2022, starting at € 209.99 on Razer.com and select retailers. Blue Screen is a chroma key panel that adds a new level of creativity and imagination to stream backdrops. Made with premium fibers, Razer’s Blue Screen allows streamers to create their own worlds and display the smoothest, most immersive backgrounds against a wrinkle-free backdrop. Used in professional cinematography, blue screens allow for cleaner typing and are ideal for streamers who want to easily change their backgrounds to reach new levels of creativity and engagement.

While compact, the Blue Screen is a height-adjustable 94 ”heavy-duty backdrop that can be quickly deployed for quick set-up. The Razer Blue Screen is available for € 159.99 on Razer.com.

The range Razer Kaira has expanded with the introduction of cuffie per PlayStation 5. The new Razer Kaira Xwired headphones designed for PlayStation 5, as well as the new ones Kaira HyperSpeed e Kaira Pro HyperSpeed. Wireless cross-platform gaming headphones that offer immersion and freedom without constraints. Thanks to Razer HyperSpeed ​​technology, both headphones can connect via one connection wireless ultraveloce a 2,4 GHz. Ensuring smooth, low-latency audio that can meet the demands of competitive gaming across multiple platforms, and one battery life of 30 hours.

Designed for gamers on the go, i Razer Hammerhead HyperSpeed they are cross-platform wireless headsets for gaming. With technology from active noise cancellation (ANC) for a distraction-free audio experience and unconstrained freedom. Endowed of dual microphone with Ambient Noise Cancellation (ENC) for enhanced voice clarity during in-game communications or calls. The Razer Hammerhead HyperSpeed ​​are powered by Razer Chroma RGB and boast aautonomy of 30 hours with the included charging case for continued use.

Thanks to connectivity wireless a 2,4 GHz (with the included Type C dongle) or Bluetooth 5.2, gamers will be able to eliminate distractions and play anywhere, from console to mobile. The included HyperSpeed ​​type-C dongle allows gamers to reduce audio latency, ensuring gaming-grade performance. They will be available from November starting at € 179.99 on Razer.com. The Xbox version will be available in November 2022, starting at € 179.99 on Razer.com or select retailers. For the community: new colors for the peripherals most loved by fans 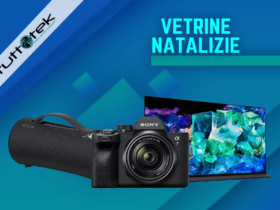