The engines heat up on the track, the checkered flag waves and the racing cars of another appointment with retrogaming, Mario Kart: Double Dash !!, have left for the crazy tracks

So let’s return with one of the best known icons of retrogaming still present on the consoles, the dear mustachioed plumber, who, this time, does not jump on unsuspecting Koopa and Goomba, but on some very fast and absurd racing cars in Mario Kart: Double Dash!! And, before you ask yourself yes, the double exclamation point it is intended, but we will get there shortly.

Era the fall of 2003 when the new racing game of the most famous inhabitant of the Kingdom of Mushrooms landed on that irresistible purple cube that was the Nintendo GameCube. Of course, a racing game could be missing, as well as a fighting game with Super Smash Bros. Melee, with the famous protagonists of the titles signed by the Big N? Absolutely not!

About 10 years had passed since the debut of the racing title, now recoverable on SNES Mini with a headache effect intact, and with the same title on the dear old man Nintendo 64. However, the choice of racing cars, routes and characters remained quite limited like the portable version on Game Boy Advance.

We therefore needed a title that, like the others, would collect the legacy of the classic adventures of our favorite mustache and always pits against friends and enemies in a challenge to the last object. A bit like the Crash Bandicoot of the then “newborn” PlayStation with Crash Team Racing (recently returned to the track with Nitro – Fueled for PS4, Nintendo Switch and Xbox One).

This time the Japanese team, always under the “protective wing” of two authorities like Shigeru Miyamoto e Takashi Tezuka among others, he wanted to experiment and dare that little bit more that made the game slightly different from the usual ones racing titles. How? Well, let’s find out together! 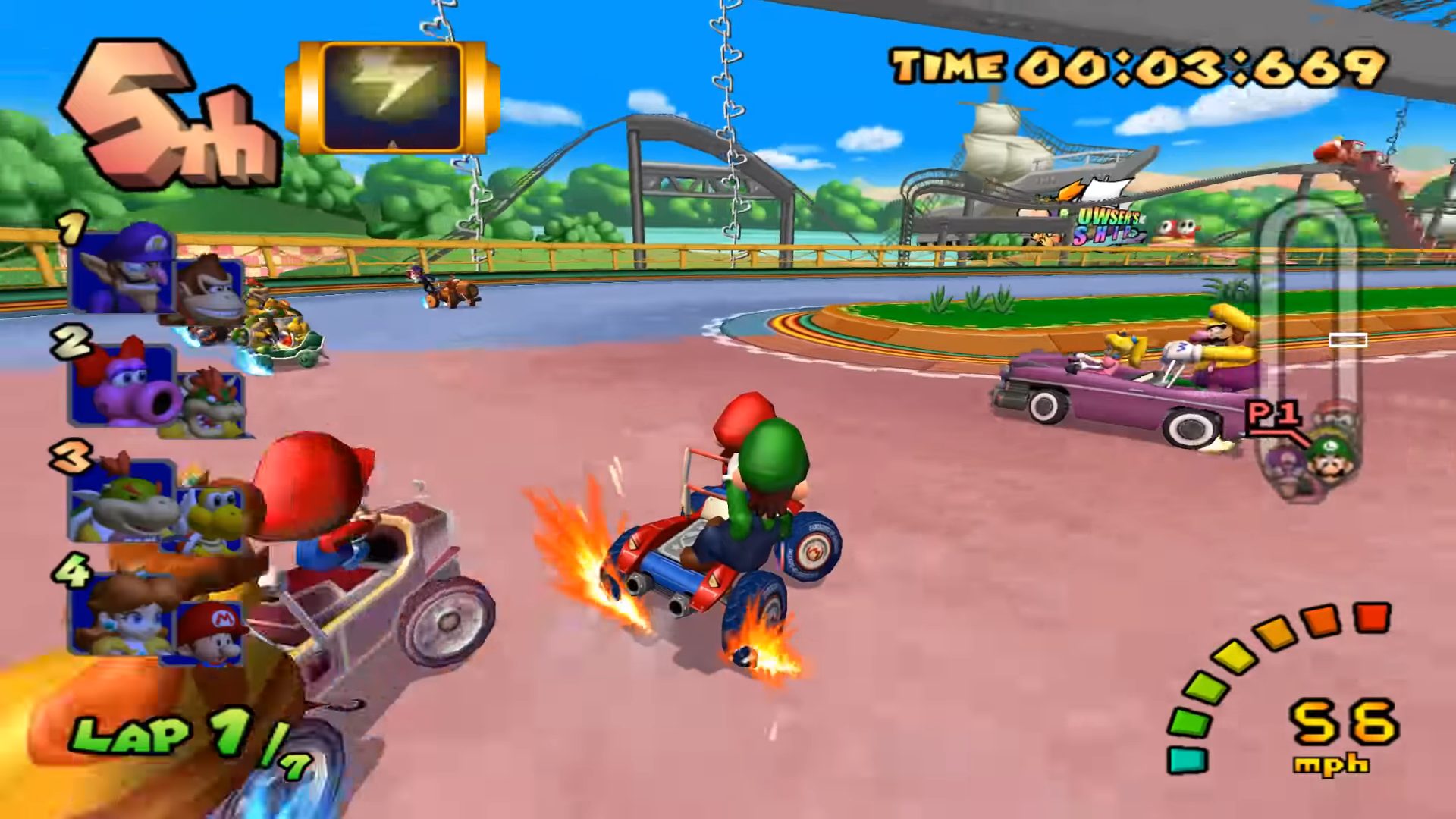 As an old advertisement of the Maxibon, played by a young Stefano Accorsi, “du gust is megl che uan“, And also our chapter of today’s retrogaming, Mario Kart: Double Dash!!, it is no less. Like other racing titles, here too it is necessary cross the finish line first and score as many points as possible to win the gold trophies in the various courses, and for each displacement thus unlocking other tracks, vehicles and characters, but the beauty lies in the fact of using two characters.

One pilots while the other throws the different objects (suitably divided between special and non-special) at the opponents and distracts them and / or hits them if they pass by. Characters can also switch between them for a better combination. In fact, each of them will use his own moves and special items, for example Toad will have the Golden Snap Mushroom to constantly speed up and Baby Mario the fearsome Chomp, to hinder opponents.

Of course you must always make sure that the drivers are compatible with the vehicle, for example Donkey Kong (obviously he will use a giant banana) will not be able to enter the vehicle of Koopa e Paratroopa, so always do a “test drive” of all characters first to find the best special move combo. 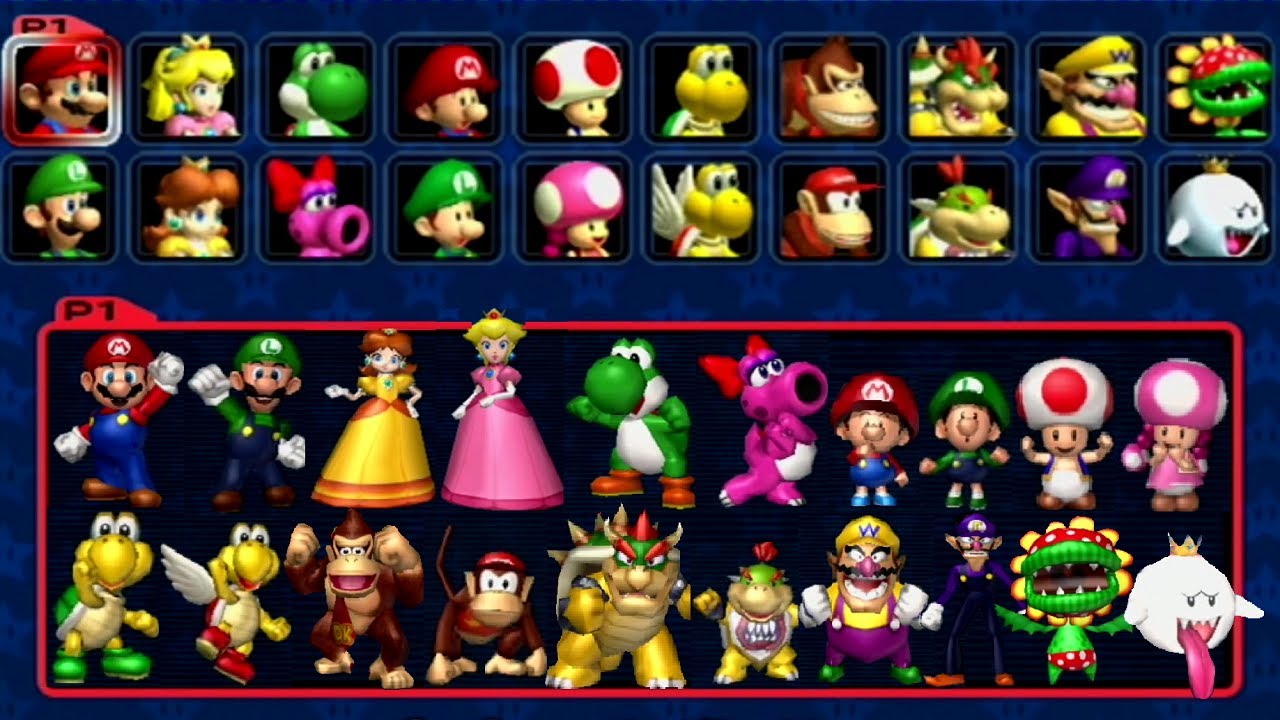 Run, find the power-ups, throw them at others, make it difficult for them to simply keep up with you and dash towards the finish line and the trophy. Yes, indeed this is the basic mechanism both of this title and of all others similar already published During the years. Of course, in addition to the advice on using the double pilot mentioned a few lines ago, you must always try to find the best possible combination of the racing car. Basically you have to carefully evaluate the relationship between base speed, acceleration and weight, this shows if you can be rammed easily or not, here expressed in stars.

The power-ups that can be used during the crazy tracks (appropriately divided into Mushroom Trophy, Flower Trophy, Star Trophy and Special Trophy) are the ones we are used to seeing. Bananas, Bob – ombs, Eggs, Stars, Lightning, Green, Red and Blue Shells, in short, you have already understood what we are talking about. As for the characters on the selection screen, they will come to you presented “in pairs” for greater reading convenience:

Between unlockable characters, by winning gold in certain Trophies with an equally specific category of displacement, there will be:

The game mode through which we can make our favorite characters run are the modality Great Prize, climb the leaderboards to win other competitors, tracks and vehicles, the mode Challenge, one player against another, the mode Battle, everyone tries to hit the balloons above their fireball, and the mode Proof in Time, unmissable for those who want to overcome even their “ghost”.

In this regard, it should be remembered that the title was meant for a maximum of four players in the same room, but, connecting locally, it was possible to run well sixteen challengers. Something that, for an early 2000s console title, was no small feat! 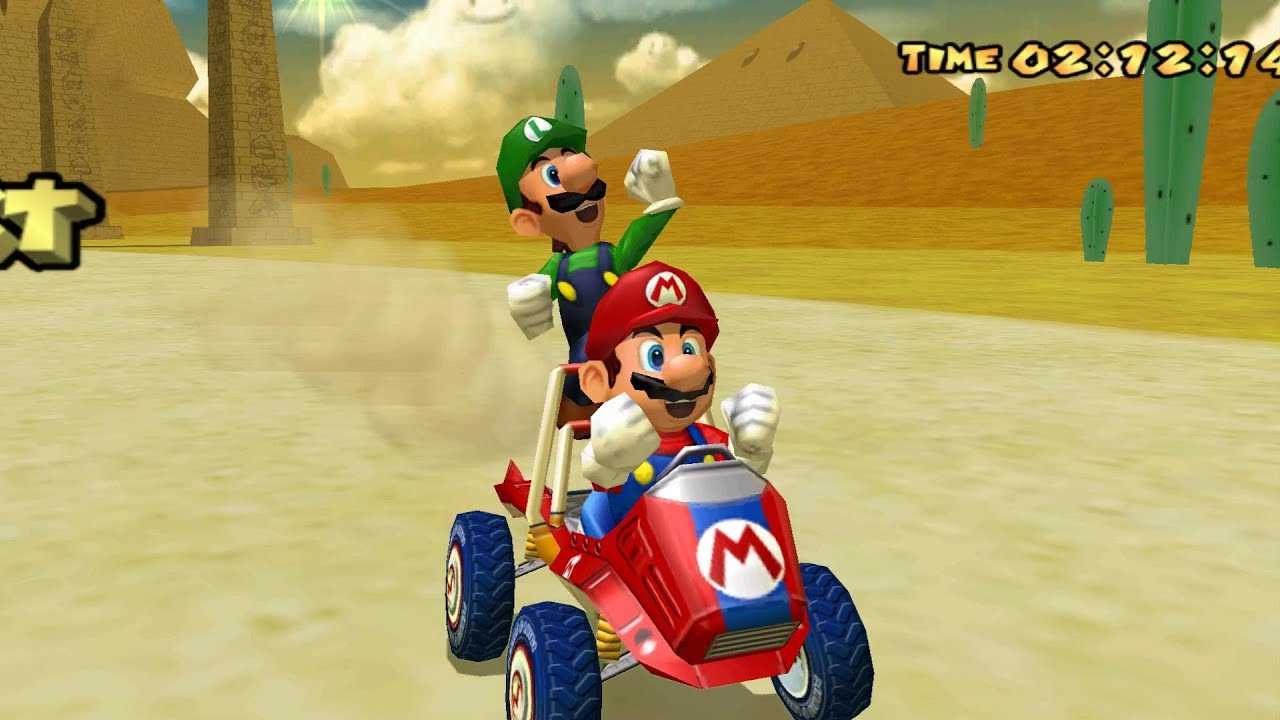 Come tradition of the Great N could the citations be missing within any of its titles? Of course not! Moreover, it was something already seen in the curious Super Mario RPG: Legend of the Seven Stars where they could meet Link e Samus, belonging to the sagas of The Legend of Zelda and Metroid.

As mentioned in the article concerning the “summer adventure” of our dear plumber, here is the path Peach Beach mentions one of the levels of Super Mario Sunshine, Desert Desert takes us back to the days of Super Mario 64 and Bowser’s Castle is the inevitable classic that is not missing in almost any episode, both portable and fixed such as Super Mario 3D World + Bowser’s Fury.

As for the others, well, to discover them the best thing to do is certainly to retrace at full speed these tracks and try to beat your own personal bests. Also do one nice challenge between friends it’s not a bad idea! Of course, it could also happen that you “hate” yourself a bit, but, hey, it’s always a cool game. 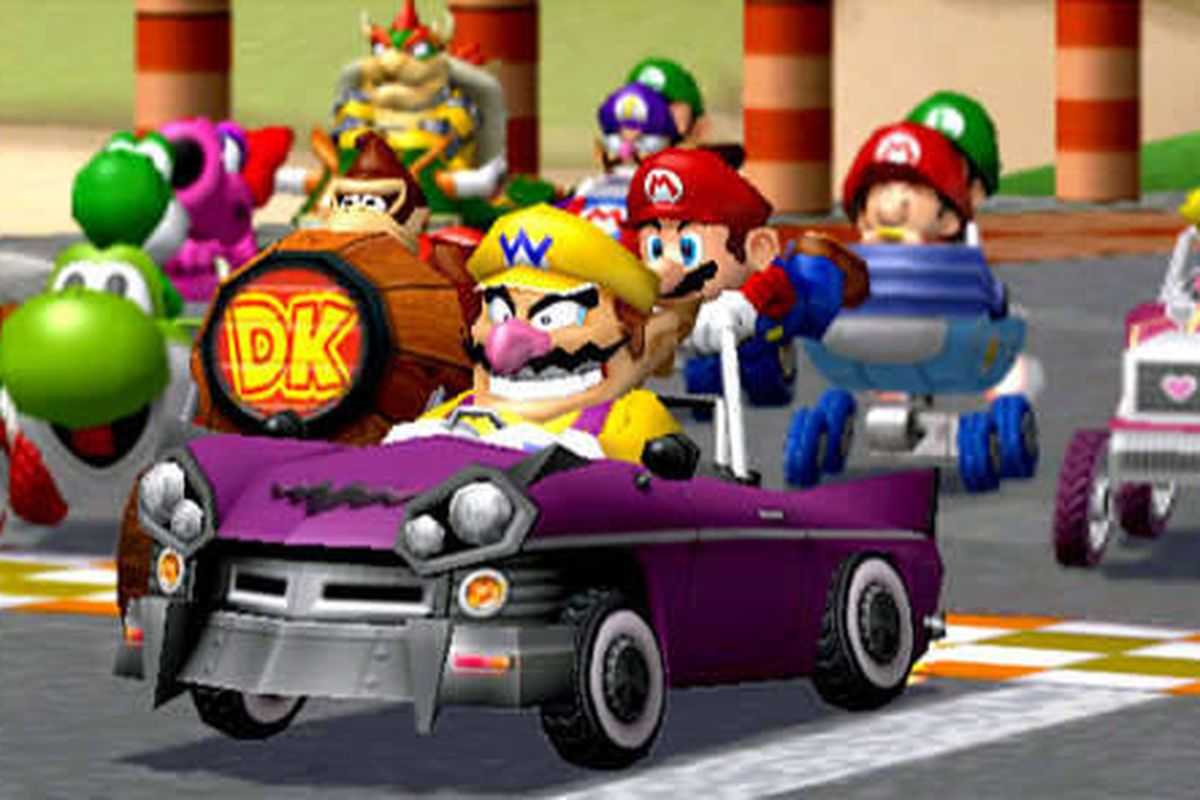 Warming up the engines for the next race

Like Super Mario 3D All-Stars for Switch, or the trilogy of the best three-dimensional adventures of the famous symbol of Nintendo, the hope is that this game will be inserted in a hypothetical racing trilogy along with two other titles at your discretion. Same thing goes for the adventures of the brave Link, but let’s give time to time and return to our dear racing cars.

Beautiful, colorful, fun, nostalgic, exciting, but above all inevitable, these are just some of the many adjectives that come to mind when I think back to this title. Unique and curious of its kind just waiting to be played again and again. Maybe you could even think of one reissue for Nintendo Switch, what do you think?

Be that as it may, if you also want to recover some chapters of the best sagas of Nintendo at the cheapest price ever, click here, while, if you want to stay up to date on best video games of yesterday and today, then, we are waiting for you on TechGameWorld.com!