Fans of history and comics know very well that the war between the roosters and the Romans was an overdose of violence and strategy between the two sides. A sensation that Gallic Wars Battle Simulator has tried to evoke, if it made it or not we find out in our review

Without going too far back in history, let’s think of another type of war, not naked and raw as in the Middle Ages, but a more colorful and comic one like the one described by the French duo. René Goscinny e Albert uderzo. The two, respectively screenwriter and designer, are in fact known globally for having created the character of the very nice Gallic warrior Asterix who, helped by the strongman Obelix and from the Druid’s Potion Panoramix, strenuously defends his own small village “now and always from the invader”.

Initially starting from the comic pages, the adventures of Asterix & Obelix then became cartoons, transpositions on consoles and even feature films with real actors (among these there is also our local Roberto Benigni). But since we are talking about videogame medium, what can we say about strategy?

With the exception of the funny adventures of our mustachioed roosters, who challenged each other to the sound of fists and menhirs, the strategic is a genre that has seen several titles alternating on the screens of gamers. From the most historical and realistic atmospheres of Age of Empires and Stronghold, with Greeks, Romans, medieval knights, Mongols, Spanish conquistadors and so on, to the most enchanted and fantasy ones of the various chapters of Warcraft and Warhammer.

Those who did not have a console or a powerful enough computer could still “refold” on games with less pretension or developed by indie studios, but it is also true that there was no shortage of those for mobile phones. In general this is the feeling you will get when playing Gallic Wars Battle Simulator, but will it be entirely true? Well, we just have to polish the order helmet and prepare to repel the Roman invaders during this review! 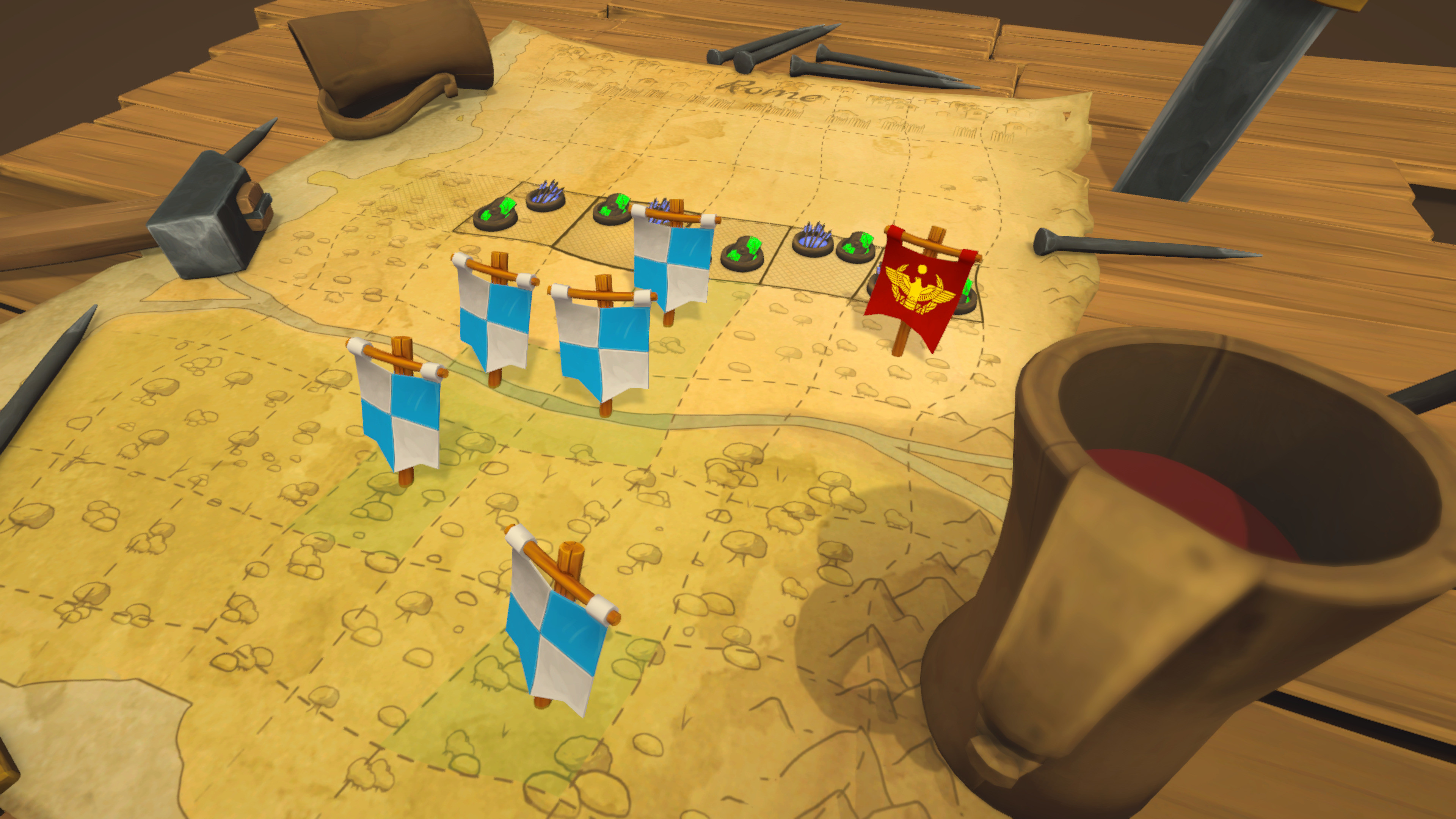 The Gallic Wars according to Mad Gamesmith

Do you know when, being alone, you have to take care of everything with your own hands? This is probably the idea that you get by going to take a look at the site of the guys, or rather the boy, of Mad Gamesmith. Tale Andy, in addition to the strategic which we will talk about in more detail shortly, has in fact created two titles based on physics, Bouncy Bob e Bouncy Bob 2, one on a redneck practicing target practice, Redneck Skeet Shooting, and one on a cowboy intent on poking zombies, Drunk Cowboy Zombie Shootout.

The fact that it is alone is then particularly evident from the site which turns out to be rather essential, but perhaps it could be a deliberate choice in the name of a certain “minimalism” as can be seen from the personal description of the good Andy.

In short, the ideas seem to be there, but the final result, despite being talked about Steam and versions for PC, Nintendo Switch e Google Stadia, it always remains that of a smartphone game or a little more. Will they turn the tables with this Gallic battle simulator? Let’s find out together! 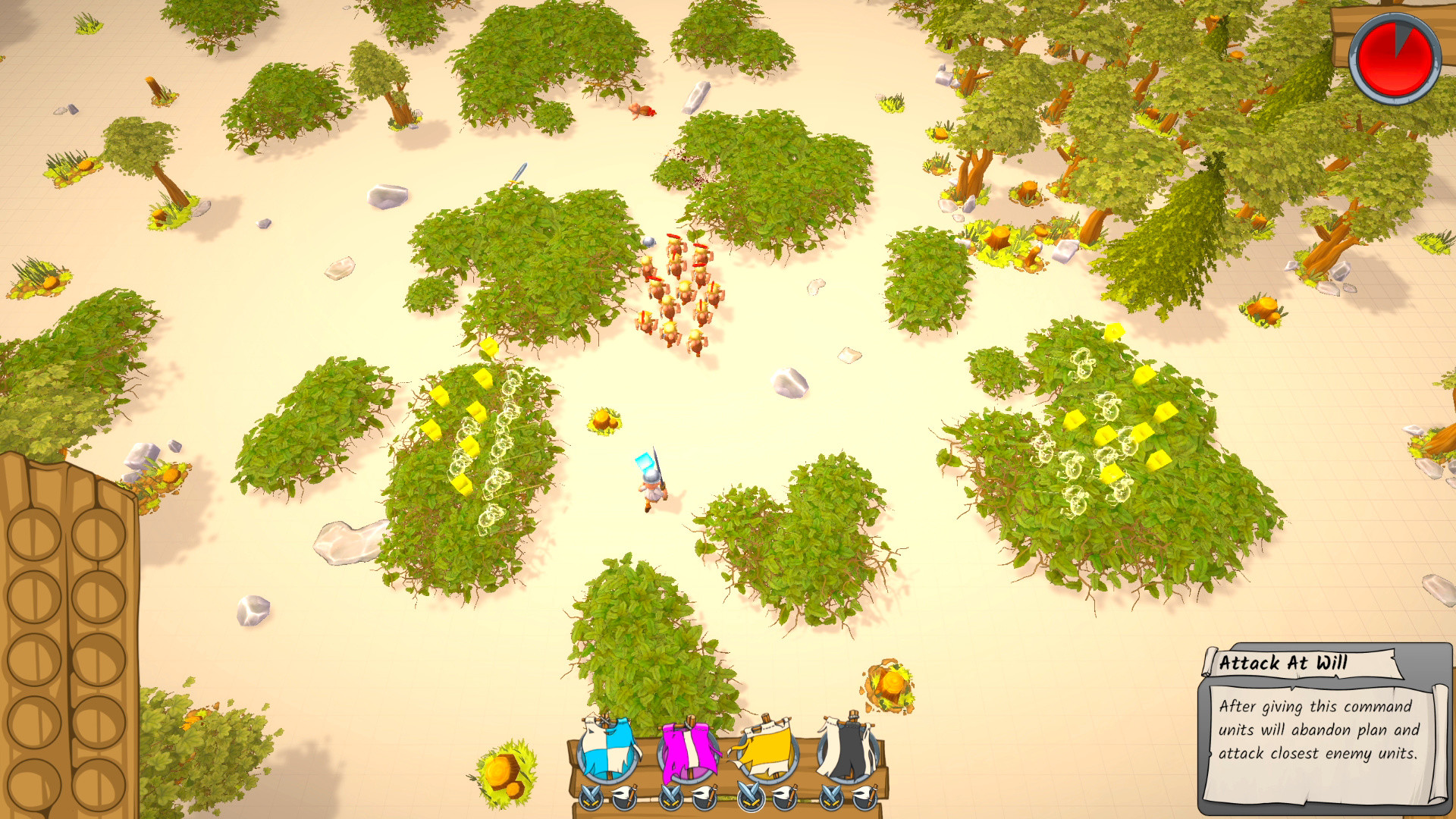 If the mythical Diego Abatantuono, in the cult Attila scourge of God, he wanted to conquer Roma at the head of his group of ramshackle barbarians, or “sbabbari” if you prefer, even during the course of the review of Gallic Wars Battle Simulator the goal is the same. Through a series of battles selectable on a war map, suitably divided into squares and with the appropriate information on the enemy troops, we will play the role of an army of roosters ready to march to Rome.

Of course, along the way, there will be troops upon troops of Roman legionaries ready to prevent us in all possible ways. From large open spaces, interspersed with rivers and a bush of any thickness, to the most characteristic towns, everything can become a battlefield where no prisoners will be taken. After all, it was the Romans themselves who said “If you want peace, prepare for war” which, paraphrased, means “if you want peace, prepare for war”. 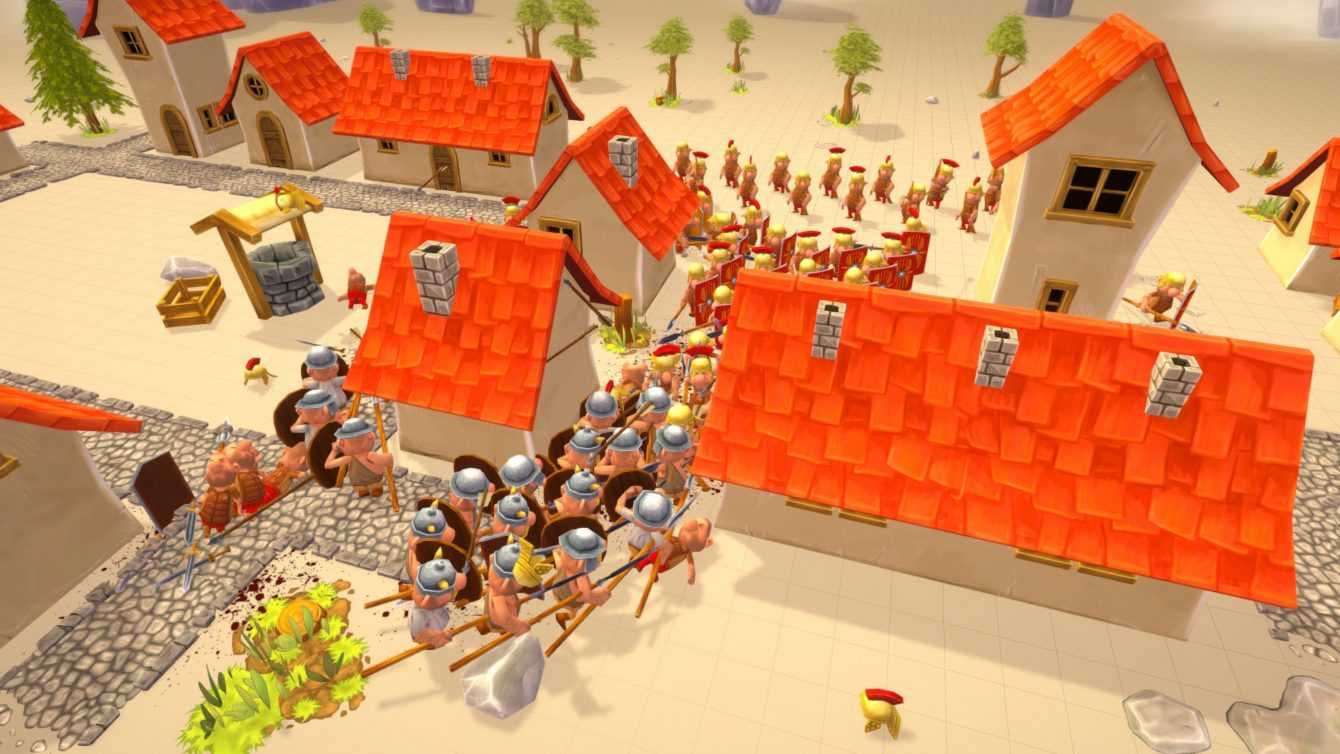 At each game the goal will always be the same, try to move your troops along the map to get to Rome defeating the enemy troops. Of course it will take a minimum of strategy to choose how many Romans to fight along the way, usually there are three or more options available, and weigh the rewards in case of victory (bonuses and additional troops). But let’s go on with a little calm.

First of all it must be said that the stages in each game are essentially three. After observing the territory and understanding where the troops will be positioned, i Romanian they will be in red rectangles while i our roosters they will be in those gave, it will be necessary to deploy the soldiers at our disposal on the battlefield.

Providing them with orientation, they will therefore look in the direction we have chosen, the steps we should take are the following: deployment, planning and action. During these it is then possible “Enrich” the battleground, or the troops themselves, with bonuses such as natural grenades that explode on contact with the enemy, bushes to hide to set up ambushes, obstacles to place to slow the enemy down, deadly traps and even fireballs or catapults that will shoot at the “Starting signal” of the scuffle.

The i four bonus tokens maximum which can be assigned before starting the campaign. In fact, by crippling the names of the friends of the aforementioned Asterix & Obelix, in fact, it will be possible to choose whether to equip the troops with a morale higher, than rewards increased, of multiple items available or a strengthening general of our soldiers. 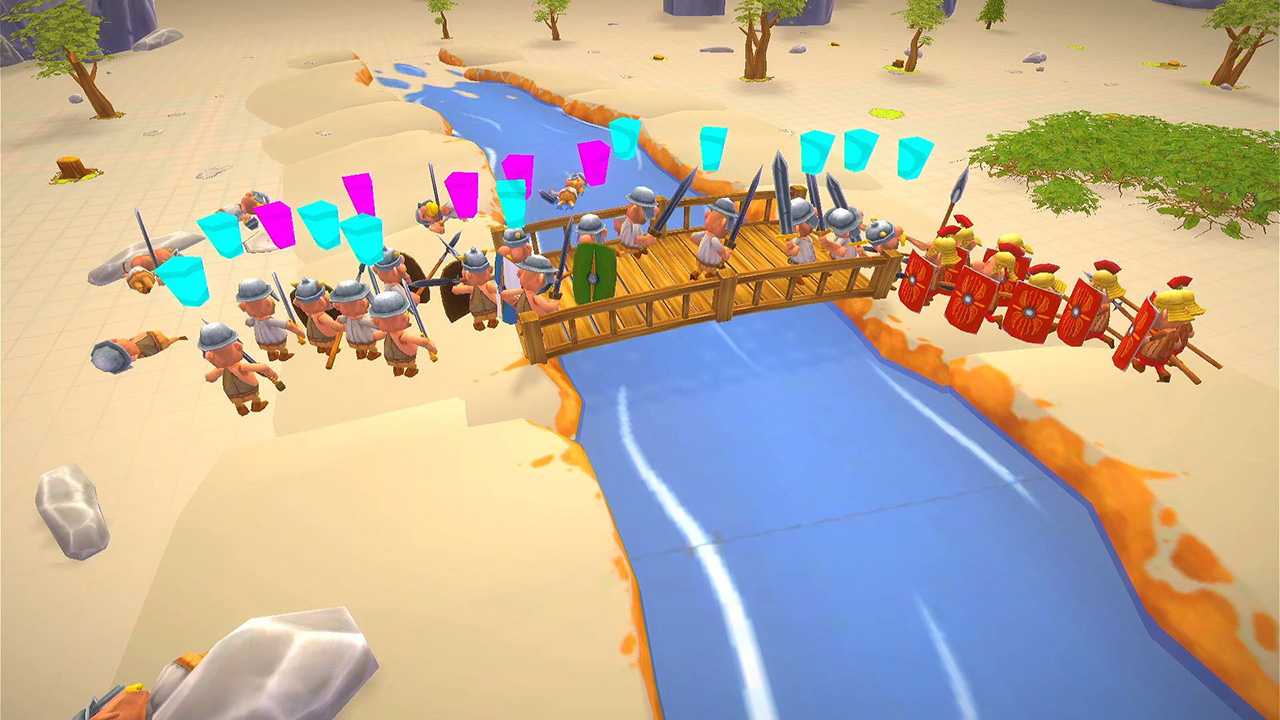 These are in turn divided into three classes such as lo swordsman, the launch and thearcher. If the former is the most common and always available, it is also the easiest to kill, the spearman is able to withstand impacts with his shield, but easily yields if hit on the sides, while the archer shoots his arrows by holding on to one side. safety distance.

All right, so you have to make an army of archers? Surely you could register an initial advantage by striking from a distance, but the latter run out of their arrows after a while and run away leaving the other infantrymen to fight alone. What a figure! Of course, Roman archers also adopt the same strategy, but it’s never nice to see your troops flee from the fight. Having clarified this point, we can therefore return to the three phases of the game.

In the deployment the troops will be put on the field also indicating the direction and color of the battalion, in the planning the movements of the soldiers will be selected by means of flags to be added to the map and in the action the dances will start. Obviously, if you notice that the enemy is encircling you or is leaving from another location (in fact you will only be able to know a rather generic position in addition to the precise number of infantry) then you can click on‘two crossed swords icon to make the strategy go to hell and all the soldiers go and attack the troops closest to them.

And if you come out victorious in a battle, you will come reward yourself with extra soldiers and bonuses to continue your campaign against great Rome. It should be noted that, as we proceed, the difficulty will also increase as the number of Roman legionaries ready to fight! 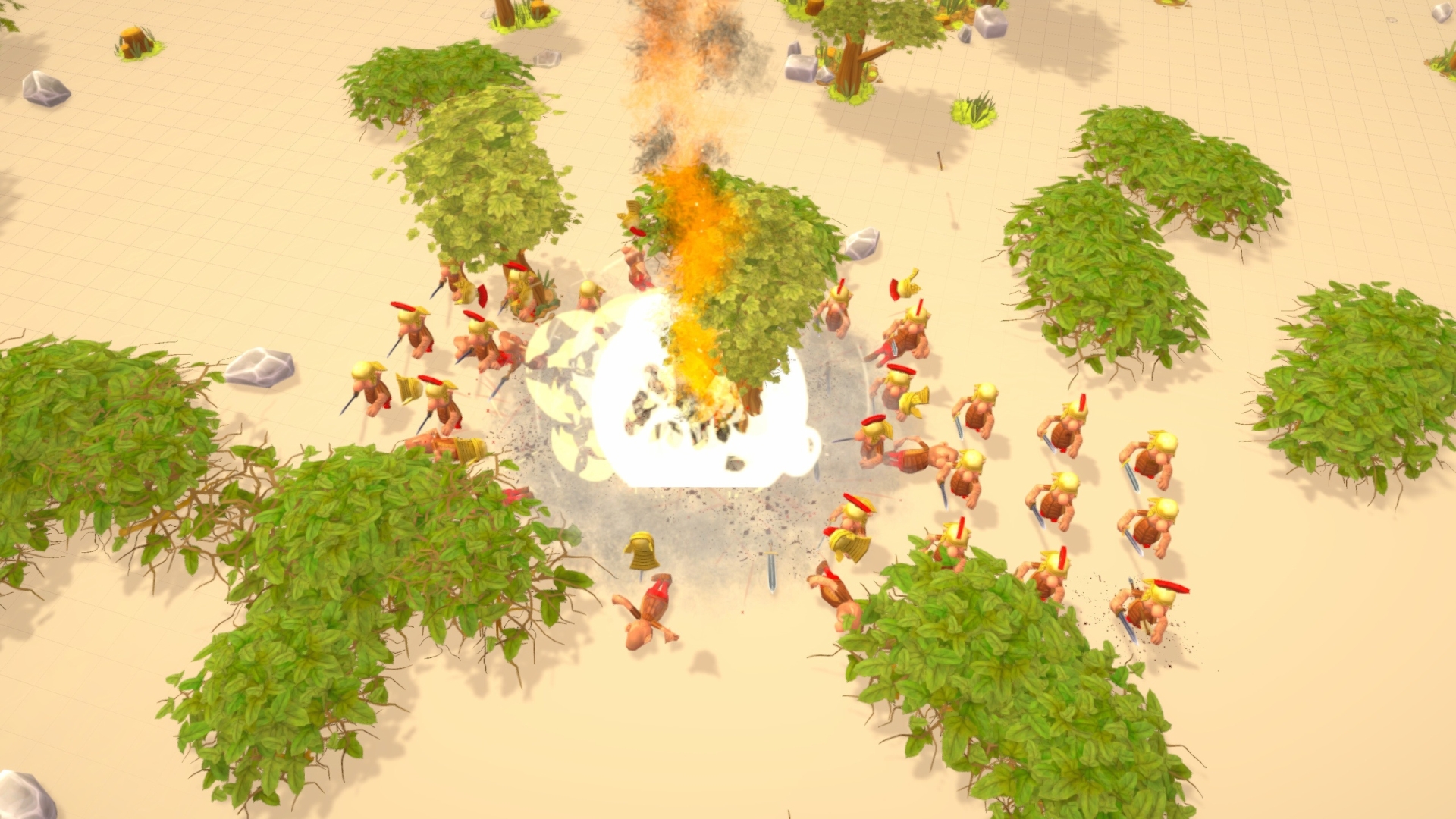 In spite of what the wording indicates “Battle simulator”, here it seems that we are dealing with a demo since the game as a whole is really short. In addition to having one graphics a little “outdated”, however not free from blood, battle cries and the clash of weapons, the same game mechanics and the choices they are very limiting. In addition to having only three classes of fighters, we remember swordsman, spearman and archer, once a movement has been set through the flag system it is not possible to change it in real time except with the option of the two crossed swords (already mentioned a few lines ago).

L’action it can therefore be well planned, but if Roman troops arrive from a small side of the map how do you do it? Furthermore, it should not be forgotten that, more often than not, the green rectangles where our troops will be positioned are too small and reductive. In short, “overcrowding” is really easy! Unfortunately, another sensation that is felt during the games is that of a general sense of emptiness, since we are on the subject of Romans we could almost talk about “horror void”, With gameplay, menu, graphics and even a soundtrack inferior to many other indie titles. 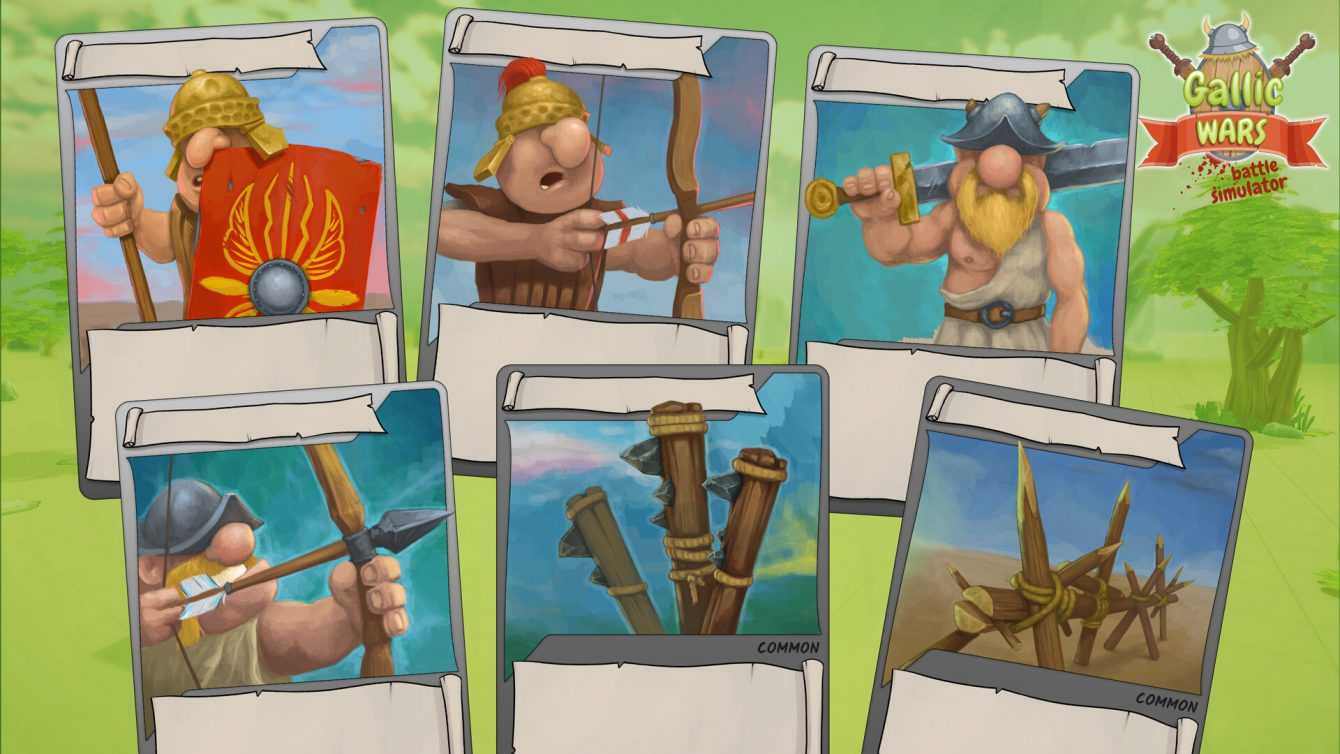 Let’s sum it up a bit

What the game in question left us, in addition to a feeling of general emptiness, is also that “not having taken an extra step”That could have changed his fortunes. Played on PC is somewhat limiting and boring, but for the casual gamers or for those who prefer something with which deceive the wait on the train, remember that it is also available for Nintendo Switch, so it could be nice too. Unfortunately, reluctantly, we have to say that here the sufficiency is not reached since the flaws are a little too many for a title like this. It could have been something better and, for sure, more compelling. We hope that, after this version, one will arrive with improvements because it might even surprise us!

In any case, if you too want to take a look at this game without paying the full price, we advise you to click here, while, to be always updated on the video games of yesterday and today, stay with us on TechGameWorld.com!

PDFelement: Create and edit PDFs like with Adobe Acrobat DC