The Russia this week took ad Apple and other US tech companies to open local offices on the country’s soil by the end of 2021: the Russian government is threatening to restrict and even issue a ban for companies that do not have a physical representation in Russian territory.

Russia: Apple at risk of ban?

As reported by the Reuters editorial team for the first time, the Russian government shared a list of companies on Monday, with a series of requests that the latter will have to satisfy in order to operate on the territory of Russia. Companies that do not meet these requirements, including the obligation to have offices located in the national territory, can be punished with sanctions or even the definitive ban.

The list of companies targeted by the Russian government includes Apple, Facebook, Google, TikTok, Twitter e persino Telegram. As many have pointed out on several occasions, this stance could be an attempt by Russia to promote and strengthen its national technology sector, while at the same time fighting American competition.

The country already has proposed taxes for foreign digital services in conjunction with tax cuts for local IT companies and even the introduction of requirements for electronic devices sold in Russia with pre-installed Russian software. The Russian communications and media agency explained that in addition to having offices in Russia, companies will have to agree to restrict access to information that violates Russian law.

The latter lends clearly puts companies in a difficult position given that restrict information that violates Russian law it basically means censoring any information that goes against the Russian government. It is worth noting that Russia recently opened an antitrust case against Apple regarding the App Store claiming that the company must immediately stop the abuses it is operating in the market.

None of the companies mentioned has yet commented on the matter. 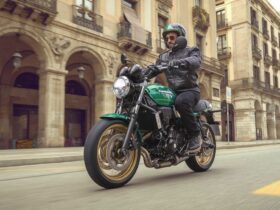 Kawasaki Z650RS retro style is back on the street