We are of course referring to Serie A football, which was only momentarily overshadowed by national triumphs at the Tokyo Olympics.

But in the past few days there has been another expected debut, those of Dazn, the platform that for this year and the next three broadcasts every week in streaming 7 matches out of 10 exclusively and the remaining 3 in co-exclusive.

Eight of the ten matches of the opening day were played between Saturday 21st and Sunday 22nd August, and Dazn revealed some problems that raised the chorus of protests of the subscribers.

Let’s see what has happened in the past few hours, and understand if it is really true that all the responsibility lies with the London-based platform. Or whether, as often happens, the question is more complex than it appears, and is also due to deep structural problems.

The problems of Dazn on the debut day of Serie A

What were Dazn’s problems during the broadcast of the first day of the Serie A Tim football championship?

The Inter-Genoa match, played at San Siro on Saturday 21 August at 18.00, opened the dance of the 2021/2022 football season. And it was that match that created the biggest problems for Dazn. Shortly after kick-off, a proportion of the spectators saw the game in a fragmented way, suffering several interruptions. There are those who counted about twenty stops of the images in half an hour of meeting. Other users have complained about poor picture quality.

There were also similar complaints, even if in a decidedly reduced percentage compared to those of the Inter-Genoa spectators, from those who attended the other advance played at the same time, Verona-Sassuolo.

Some then asked for a direct goal service, which allows them to watch two games simultaneously without changing the channel. Service that, guaranteed Dazn, will be implemented starting from the third day of the championship.

Let’s add that Dazn’s problems don’t seem to have involved Timvision, which in its offer also includes the subscription to the platform today in the eye of the storm.

The reactions of the spectators and the declaration of Codacons

The reactions of fans and enthusiasts on social networks were many and of different quality. It must be said that many have taken it with irony, feeding the nice culture of the meme that for some time has taken root on the Net. The quality of the streaming of Dazn has been combined with the graphics of the video games on football of the nineties of the last century .

But there was no lack of those who, not at all inclined to joke, vigorously protested and asked for the reimbursement of the annual subscription to the platform. Between serious and facetious interventions, there were more than 17,500 tweets dedicated to the problem.

In this sense, Codacons immediately made itself heard, who spoke of a “disservice which had already occurred last year. Signal problems, as well as video quality, for Dazn: images frozen, then restarted, then disappeared completely, then returned, then interrupted again ”.

On the problems of Dazn during the last championship we spoke with an article, in which we explained the only partial responsibility of the London company.

Codacons continues, asking for “immediate reimbursements in favor of all subscribers due to the impossibility of using the purchased service. Those who, in fact, are in possession of Dazn packages and have not been able to watch the match on TV, or have suffered continuous signal interruptions, have the right, according to the Civil Code, to obtain a refund of the amount paid, in proportion to the inconvenience suffered. “.

Dazn explained that the vision problems of the first half must be charged at the peak of accesses on one of the Cdn, that is the providers that distribute the contents on Ott (Over the top) platforms.

The company also made it known that it intervened promptly to re-establish the connection. He quantified (optimistically) the duration of the accident in 3 minutes. And he added, with a perhaps somewhat reckless statement, that the problem was not “numerically important” in proportion to the very high number of users who attended the debut match of the Serie A Tim football championship.

Dazn’s problems and the digital divide

The problems of Dazn can be partially justified by the fact that several users have connected from holiday resorts, with a connection that is perhaps weak or unstable. But many complaints have also come from those who have fast connections, including the 1000 mega fiber.

Furthermore, the automatic transmission switch to digital terrestrial, foreseen in case of malfunctions, did not work. 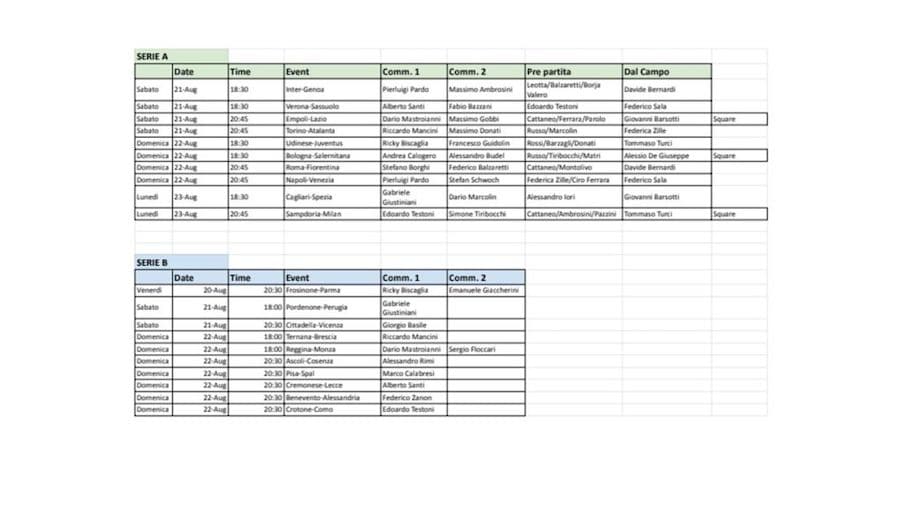 Marco Bussone, president of Uncem (National Union of mountain communities communities) explains this well. His statement is on Saturday 21st, before the two debut matches, and it appears almost prophetic: “Dazn and Tim start today with an online Championship that needs network, bandwidth. And good network and good bandwidth. […]

If it weren’t for the wireless that reaches many parts of the Apennines and the Alps, the situation would be much worse than it is. […]

Uncem asked Minister Colao and Undersecretary Mise Ascani to review what has been done and above all what has not been done in the white, mountain areas, also because the billions foreseen in the PNRR will probably go only to the gray areas, further penalizing the Alpine and Apennine territories. If the championship is to arrive once again to tell us that the digital divide exists … “

Dazn victim of the digital divide?

A final consideration. Are we sure that Dazn is a victim of the digital divide? Or, should a company that wins an exclusive of this magnitude have made sure of the full feasibility of what was promised to its subscribers, before running into glaring misunderstandings like the one on Saturday?