Connection anywhere, even on smartphones, thanks to satellites launched into orbit from SpaceX. Almost. T-Mobile e Starlink announce a collaboration to cover the “dead zones”Where the 5G connection does not reach, so that you can access the internet from your smartphone. But the “from the sky” connection will be limited to messaging and only in certain areas.

Starlink will connect your space to the internet via satellites

The American telecommunications company T-Mobile announces a new partnership with Starlink, the division of SpaceX that offers internet connection via a constellation of orbiting satellites. The great advantage of transmitting the signal from the sky instead of from the radio towers lies in the greater coverage and T-Mobile wants to exploit this quality also for the mobile world.

In fact, the CEOs of the two companiesMike Sievert and Elon Muskthey announced the “Coverage Above and Beyond”which will allow smartphones connected to the T-Mobile network to use Starlink satellites when there is no coverage.

The video of the announcement

Connection, but only for messaging apps (and only in the US)

According to what was explained at the presentation event, the available connection will go from 2 to 4 Megabits per second in total, divided by all users in that area. This should be enough to send multimedia messages via “A selection of messaging apps” even when the mobile connection fails.

The service will be limited to “Continental United States, Hawaii, part of Alaska, Puerto Rico and territorial waters“. So only to the United States, as was to be expected given the role of T-Mobile. But this project could potentially pave the way for other collaborations with operators around the world in the future.

However, when the beta launches towards the end of next year, only some of these areas will be covered.

Connection thanks to the second generation of satellites

According to Elon Musk, the second generation of Starlink satellites that will arrive in orbit next year will be able to transmit the signal in the PCS spectrumwhich T-Mobile enhanced after merging with Sprint a few years ago.

Musk explains that satellites have “Great grand antennasi” of 5 or 6 meters which can also connect to smartphones. But he specifies that “they will be fine for the calls and messages, but not for [operazioni] high band “. And she goes as far as to say that “If there aren’t many people in the cell, you could potentially see some of video” in streaming.

Plus Sievert added that they will work with apps like WhatsApp o iMessage so that the services can use the satellite connection. Something that suggests that some features will be blocked by the operator. And Musk explained that by limiting the number of apps and covered areas, they can guarantee a ‘basic’ connection. But because you need a connection to the entire Starlink system, so that you can send a message via the internet via your smartphone this could take up to 30 minutes.

The two companies have already explained that they will be able to work with other operators in the world who are devices a take advantage of the spectrum and technologies of T-Mobile and Starlink. So to see this type of connection in our country we will have to wait for a contract between T-Mobile and some Italian operator.

Musk on Twitter also has specified that also the Tesla will be able to use this technology. At the moment in the United States, the electric cars of the brand use AT&T for direct internet connection. 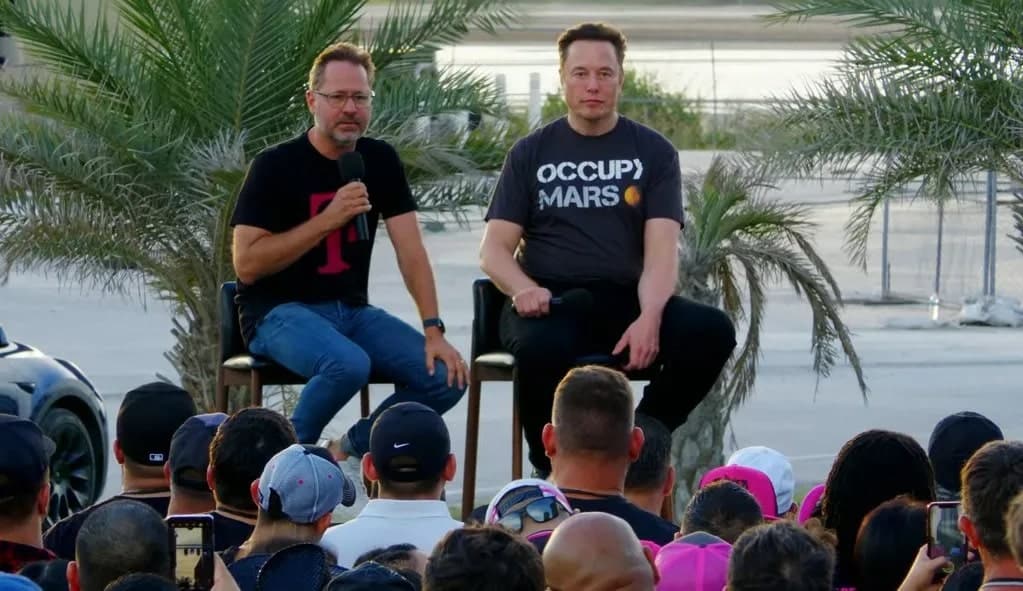 Sievert explained that T-Mobile’s intentions are to provide this service for free to those who have the “most popular plans”, while the “low cost” ones will have to pay one monthly fee to use this service. But that should be much lower than its competitors for satellite navigation. However, he explained that these words are not an official announcement and that they could re-evaluate the offer.

Starlink has ambitious intentions on the satellite connection and we expect it will soon attempt to bring this type of international agreements. But many analysts are dubious about the results. The connection on the spectrum of the cellular network has the great advantage of not requiring some type of hardware. All smartphones will be able to connect.

But some analysts think that big brands like Samsung and Apple (first and second for smartphone sales in the world) would be easier to integrate a receiver to connect to one of the satellite networks existing. Something that would exclude older smartphone models, but would guarantee global coverage.

In fact, the problem for Starlink is the rights on frequencies, which in the world are allocated differently on the basis of countries and commercial agreements. Guarantee one global coverage would require working with different operators around the world. Finding agreements with all of them, individually. A headache that could be more complicated than sending satellites into space.