Apple Arcade offers a huge catalog of titles to play on your phone, here are the best games available

For some time, Apple has thrown itself into the world of video games with its subscription service. If you are a fan of mobile games this could be it the right service for you. The number of games present is really high and the quality is good, this could lead to some confusion in choosing the game to try. We come to your rescue with this guide on the best titles to play on Apple Arcade.

The features of Apple Arcade

In a market like mobile, dominated by free-to-play games with often invasive microtransactions, Apple Arcade brings some fresh air for all fans. In fact, the subscription service ensures that all games will have no microtransactions, no advertisements and will be usable offline. This philosophy allows you to give the right value to good quality video games even on smartphones.

Apple Arcade subscription is priced at 4.99 euros per month and you can share it with six other people from the same family. There is also one one month free trial during which you can freely try the service.

The first things that stand out when playing Sayonara Wild Hearts are there color palette, which enhances the game’s artistic style, and the soundtrack beautifully maintained. The title developed by Sinogo transports us to a pop album where The Fool (the protagonist) launches into a mad rush to the rhythm of music.

Beyond all the artistic qualities the gameplay of Sayonara Wild Hearts is simple and engaging. The title lends itself well to short gaming sessions which makes it particularly suitable for mobile gaming. All of this makes the game one of the best in the Apple Arcade catalog. 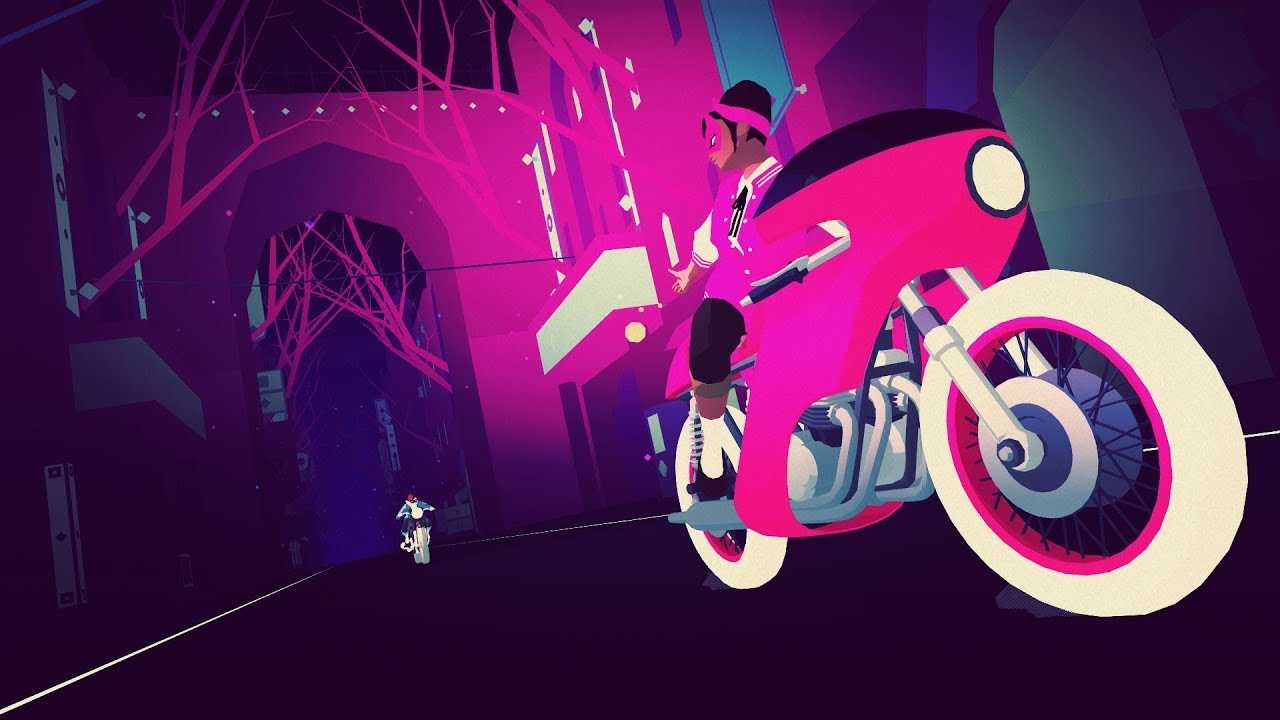 What the Golf? – The best games on Apple Arcade

Despite the title, the last thing we could say about What the Golf? is that it is dedicated only to fans of this sport. The title is one of the funniest around on smartphone and never ceases to amaze. In fact, you will always want to continue between the levels of the game to find out what other crazy idea the developers have had.

Each level has different rules and mechanics e there is often no shortage of citations to great titles of the present and of the videogame past. Precisely for this reason we advise you to try What the Golf?, You will probably not be able to do without it anymore. 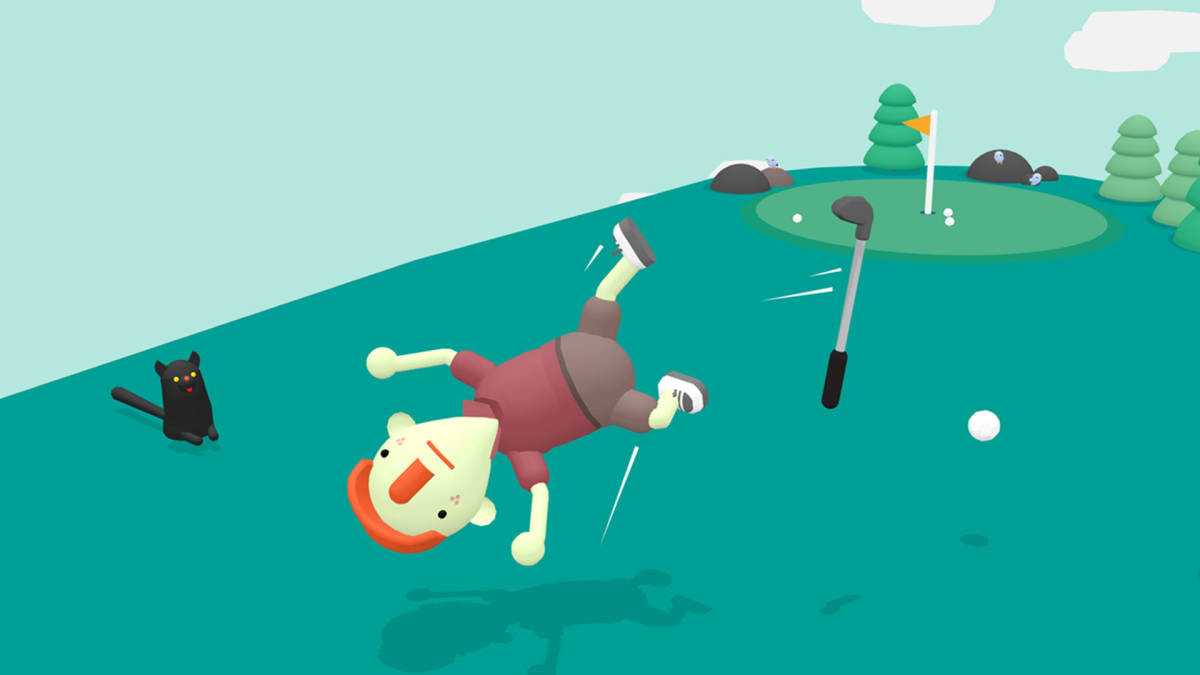 As you can easily guess, Exit the Gungeon is a spin off of the acclaimed Enter the Gungeon. Compared to the original chapter, this is a sequel, abandoning 3D in favor of a two-dimensional more suitable for portable gaming. The game immediately offers one rather demanding challenge, if you are looking for a truly hardcore mobile title Exit the Gungeon is the game for you.

Also very interesting is the possibility of being able to enjoy two different experiences depending on the controls. Because if you play with the touchscreen you will have some aids such as automatic aiming and some bullet times in the most hectic moments. Helps that will be absent if you decide to use the controller. Another point in favor is high replayability, in fact it is possible to unlock new characters with which to complete the adventure again. 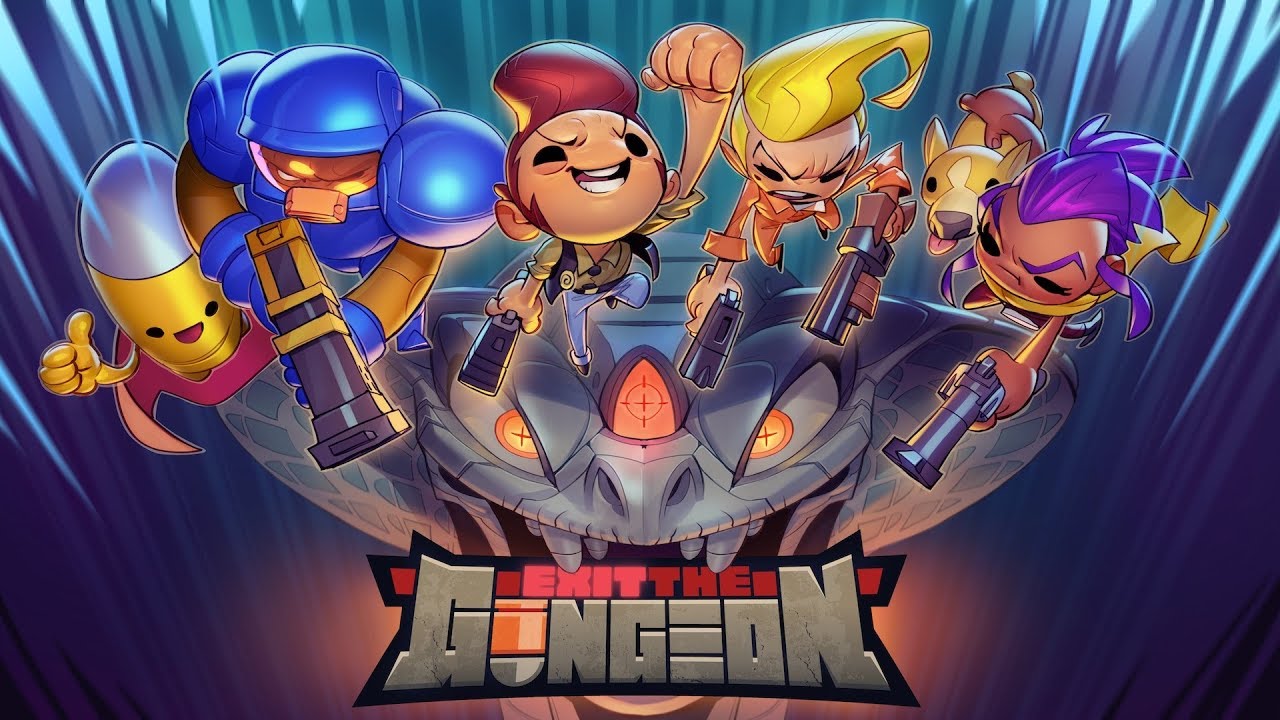 Here is the Zelda of the videogame on smartphone. Oceanhorn 2 Knights of the Lost Realm is an action RPG that it has nothing to envy to other productions present on home consoles with a profound and fulfilling experience. The inspiration from the Nintendo saga is evident, both from a graphic and gameplay point of view.

The glance is great for being a mobile game as well we advise you to try it also by connecting the iPhone to the TV, since in this case it is able to give the best of itself. Oceanhorn 2 Knights of the Lost Realm allows you to bring a typically homey play experience around with you throughout your days.

Shinsekai: Into the Depths – Best games on Apple Arcade

Big names like Capcom have also come close to Apple Arcade. Shinsekai: Into the Depths is a two-dimensional metroidvania set completely in the depths of the sea. The game relies heavily on the component survival and overshadows action to leave room for exploration.

Shinsekai: Into the Depths is a title that requires a certain commitment to be played and is yet another proof of how smartphone gaming can enjoy a certain depth. A very nice title that can give several hours of fun to all Apple Arcade subscribers. 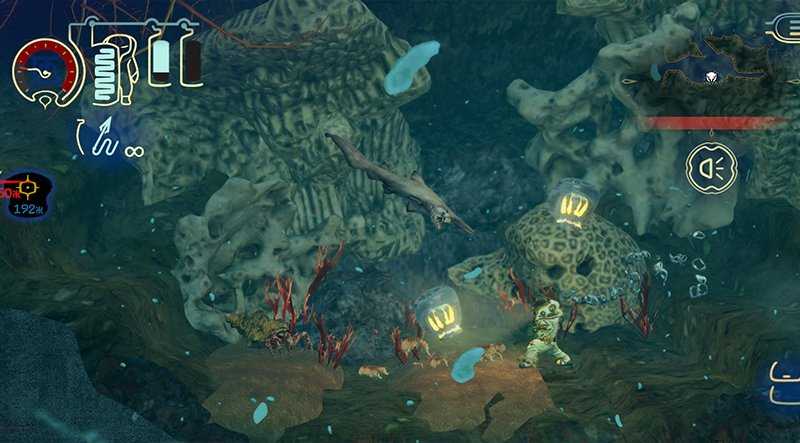 Where Cards Fall – The best games on Apple Arcade

Where Cards Fall demonstrates how with a simple idea you can build something that stays inside you. It is essentially a puzzle game structured on levels. There are gods to help us get there decks of cards who can build structures to move around the level.

But this is not a trivial series of puzzles, in fact it is not to be underestimated poetic behind the game which makes it truly fascinating. Also helped by one excellent graphic style for a mobile game, which won’t stop hitting you throughout the course of the game. A game with a calmer and more reasoned rhythm it can certainly be a valid choice for example for a quick session before going to sleep. 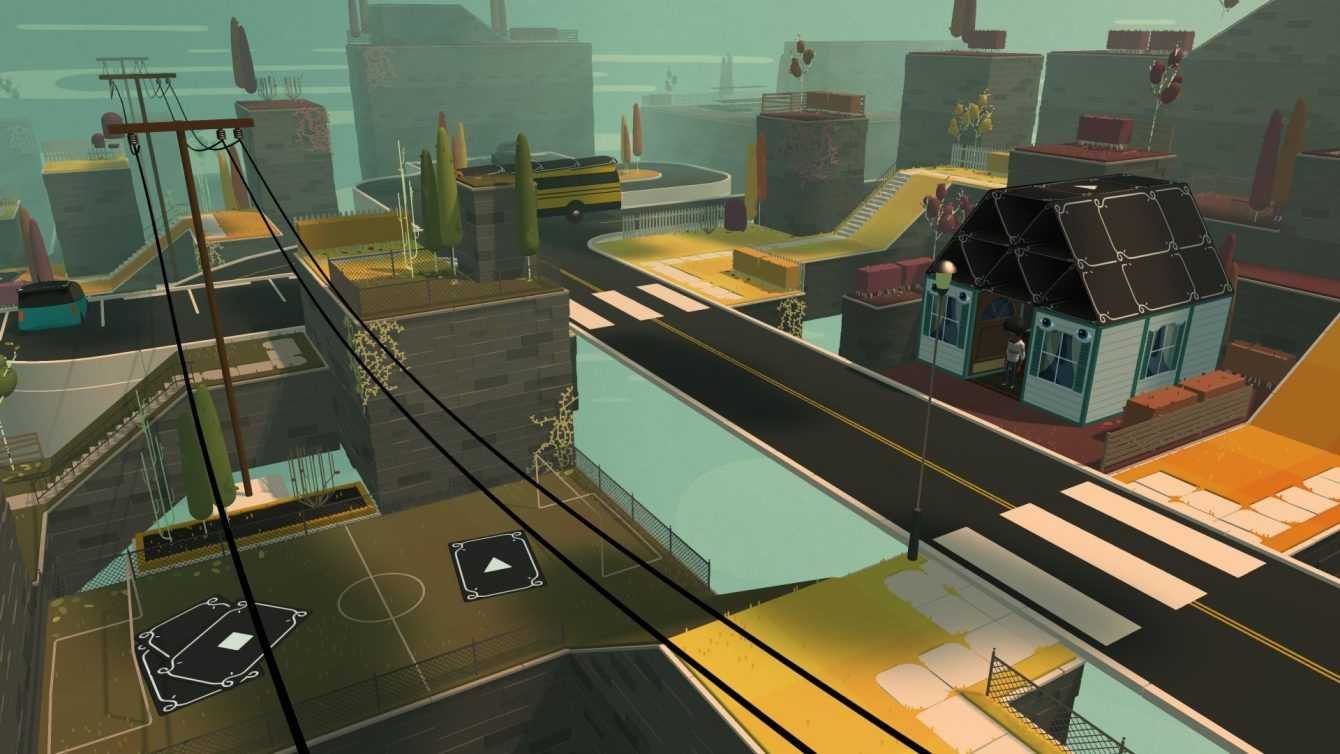 Assemble With Care – The best games on Apple Arcade

The game, developed by the creators of Monument Valley, is proposed as a light experience particularly suited to the mobile format. The aim of the game is to repair objects along the 12 levels of the game. All accompanied by a simple plot, but rather pleasant.

Assemble With Care works perfectly with touchscreen controls. This is not a complex game or one with too high a difficulty. If you are looking for a pleasant and not too demanding pastime this could be the title for you. You will find out how through this simplicity it is possible to pluck some strings of your sensitivity. 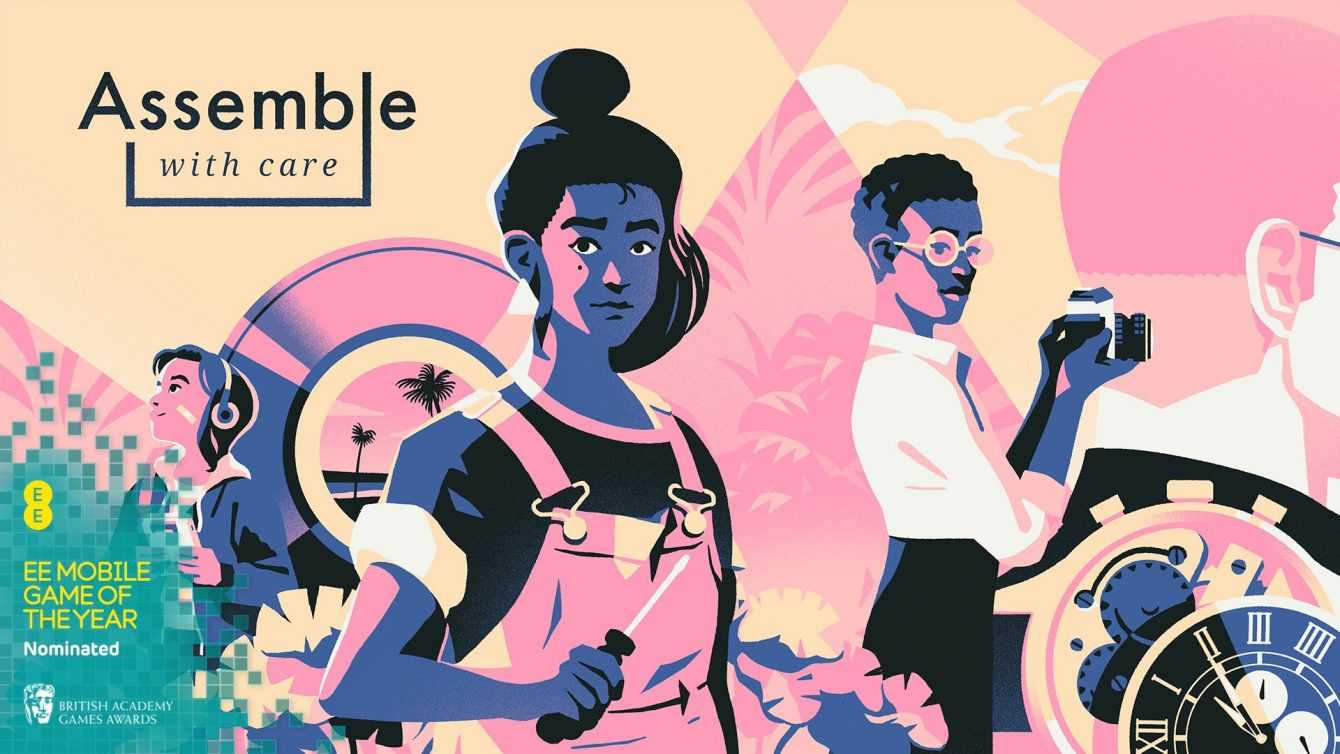 Let’s move on to a seemingly simple game, but which can turn out to be more complex and competitive than expected. Super Impossible Road is a title in which you have to participate in races based on some spheres with the aim of finishing first. The player will have to try to stay in the path as much as possible to avoid falling at the beginning.

In fact, after a while you will understand that the best way to play Super Impossible Road is throw yourself off the tracks and use the off-piste as a shortcut. The mode multiplayer online will make you understand what we are talking about. This is the ideal game to turn the light up a bit competition against other players even with games dedicated to mobile. 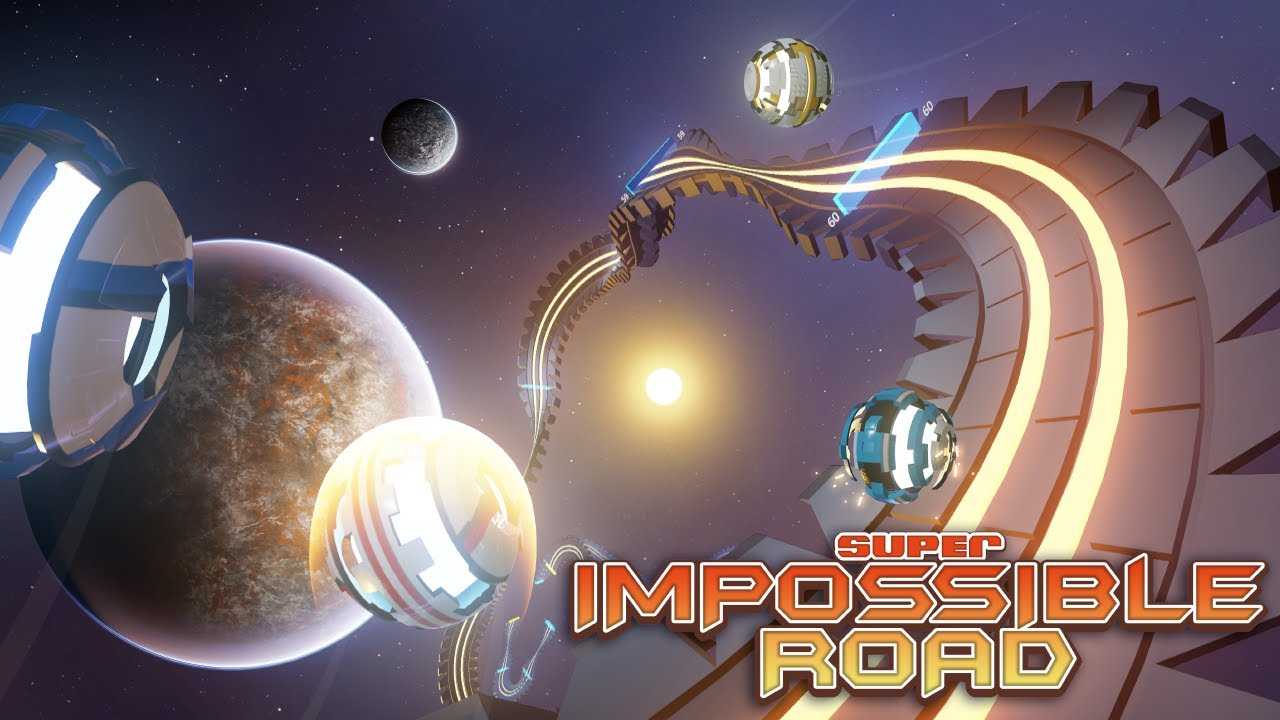 Pac-Man is definitely one of the greatest videogame icons ever and you probably all know her. This time the game formula is renewed according to the canons that are currently the most fashionable, we are obviously talking about battle royale. It’s about good old Pac-Man, only this time you will not only have to deal with ghosts, but also with other players.

Indeed the aim is to remain the last player in the game as in the most classic of battle royale, also addressing the AI ​​called “Pac-Bots”. In case you were to lose there will be a chance to keep playing like a ghost to embarrass the opponents. 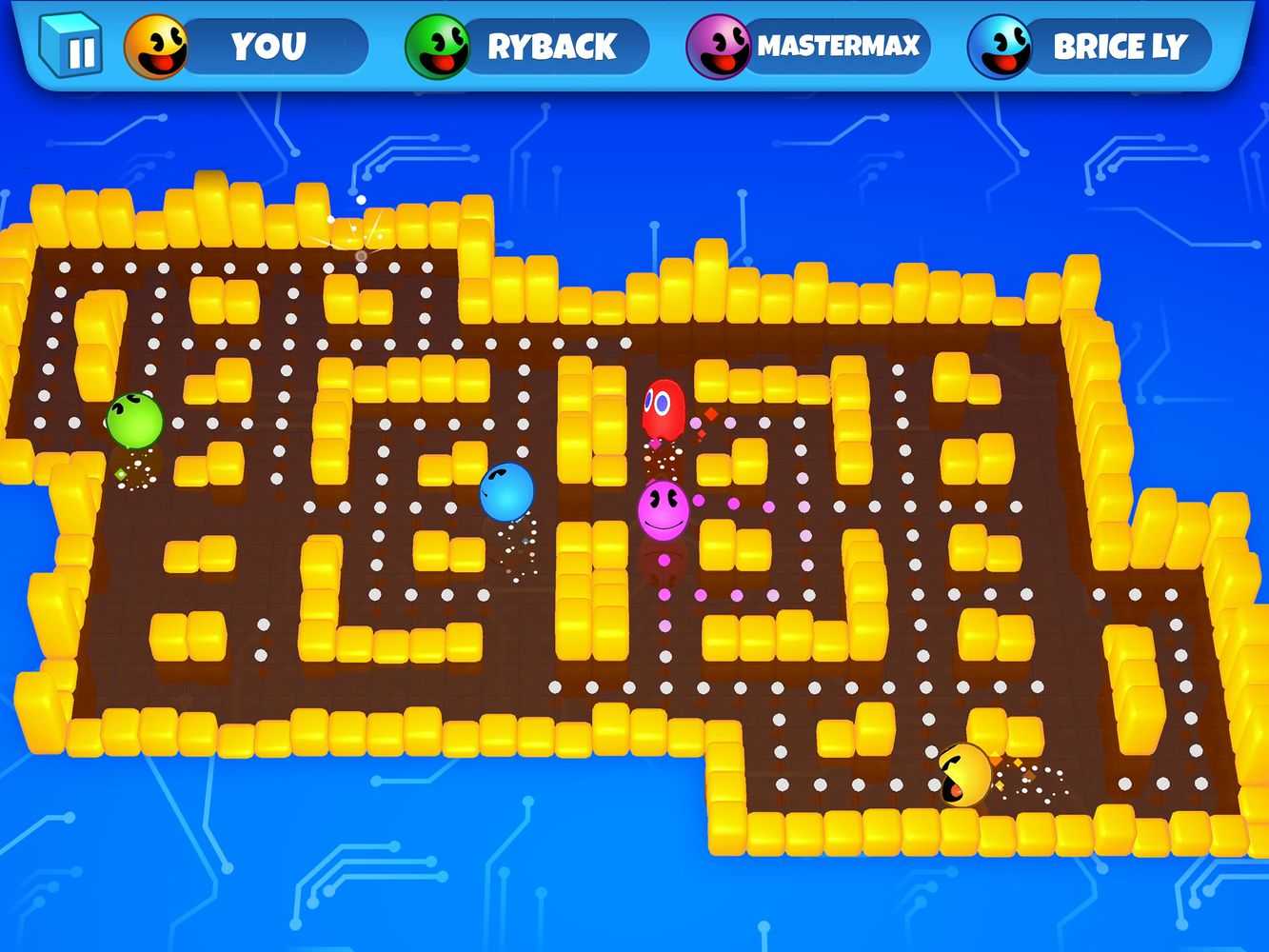 The first thing that catches the eye when you see it Towaga: Among Shadows it is obviously the artistic sector. Strictly in 2D, the game is truly one feast for the eyes considering that we are talking about a mobile title. Also there soundtrack is particularly accurate, the same Apple in fact recommends using the AirPods to better enjoy the gaming experience.

From the point of view of the gameplay instead we are in front of a title hectic, but at the same time simple and immediate. The protagonist is stationary in the center of the screen and you will have to do it survive the hordes of monsters who will try to attack him. Having good reflexes will be essential, but there is also one strategic component. The choice of upgrades will allow you to create your ideal build, capable of facing any enemy. 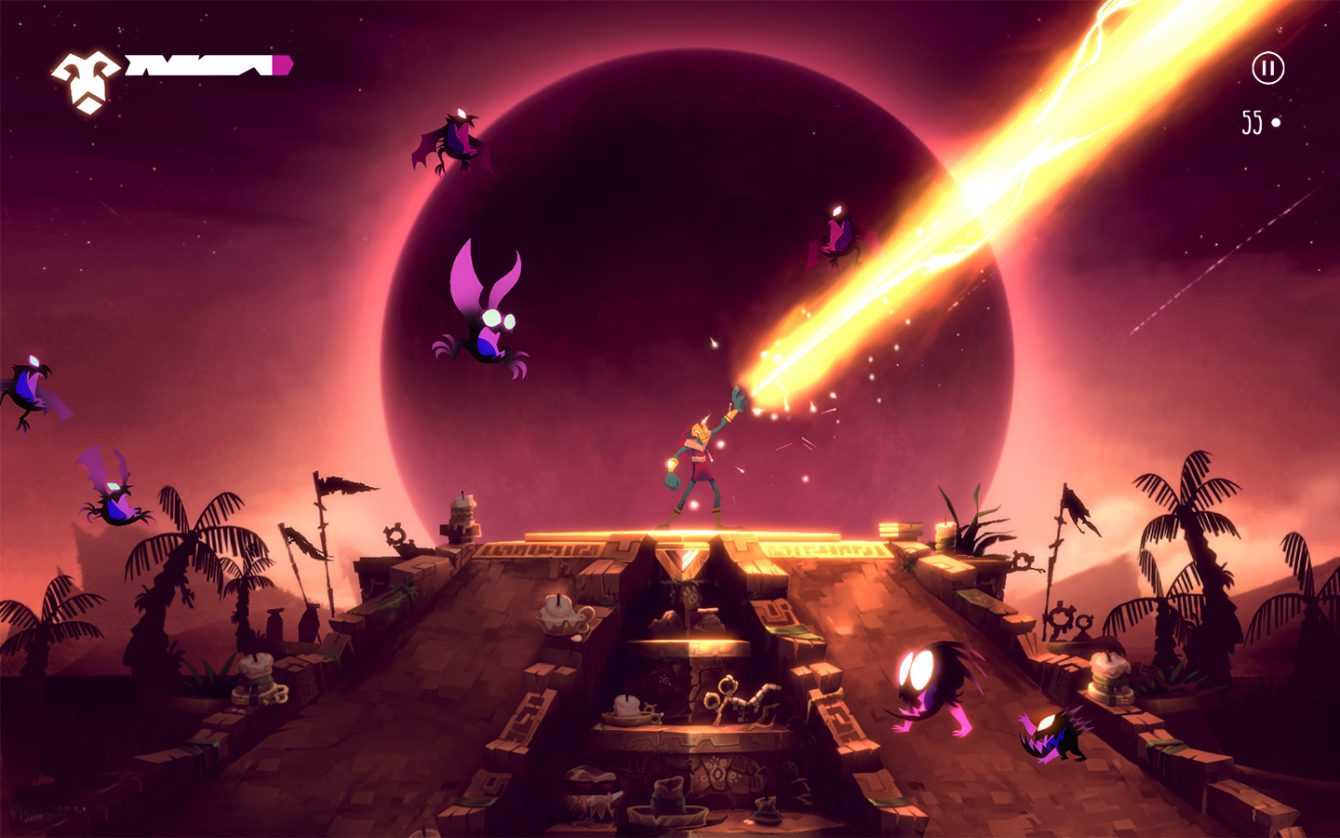 The Last Campfire – The best games on Apple Arcade

Hello Games’ latest work is also available on Apple Arcade. For the uninitiated Hello Games are the creators of No Man’s Sky, which this time they wanted to dedicate themselves to a title completely different. The Last Campfire è un travel story of an ember moving away from its bonfire. The protagonist will therefore have to cross places full of dangers to make his journey.

An art design that brings to mind Journey it can only be interesting. In addition, the game focuses a lot on exploration, in a metroidvania structure, to deepen the protagonist’s intimacy. You might find this adventure quite interesting and it might give you some emotion, so don’t hesitate to give it a chance. 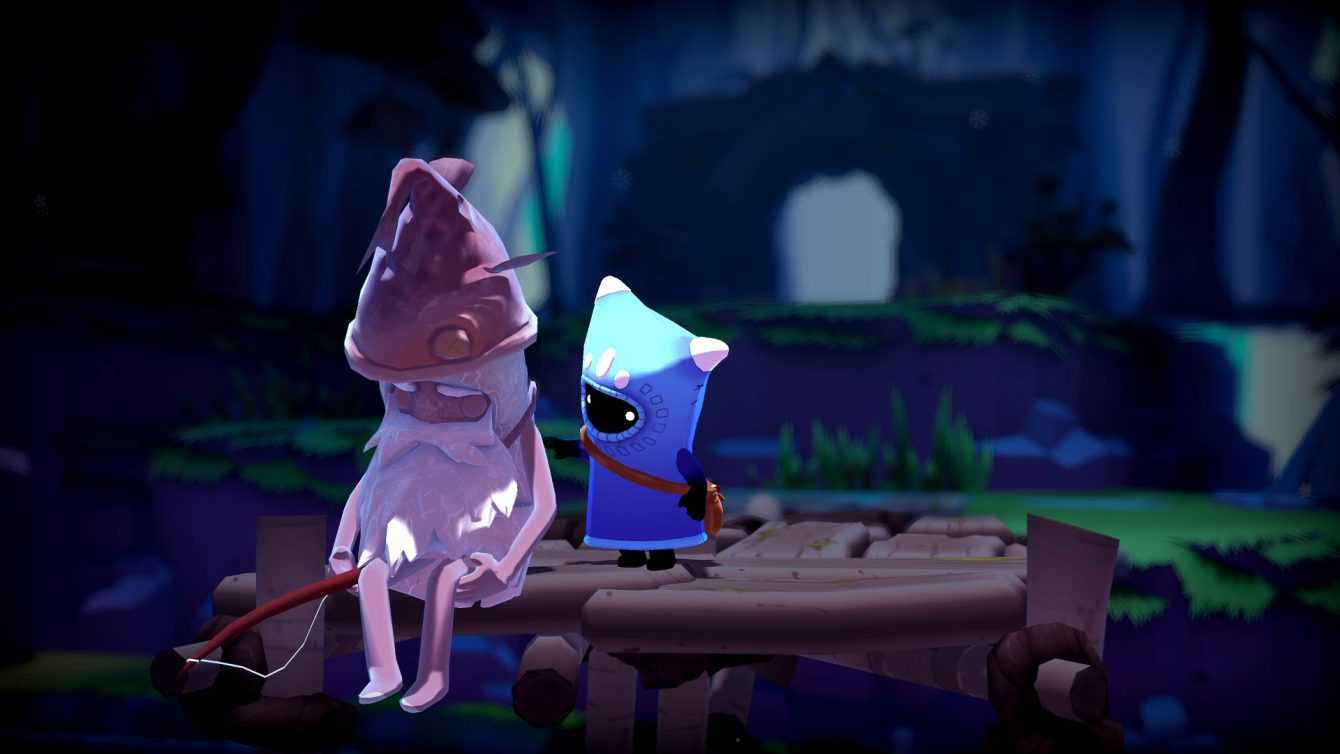 The time has come for a game that doesn’t take itself seriously, but at the same time turns out to be really well done. In Sneaky Sasquatch we will take on the role of the ape man who gives rise to the title of the game, struggling with a series of stunts within a campground. The gameplay is divided into days, and the primary goal is to get food. To do this we will have to take advantage of all the possibilities that the game provides us so as not to be discovered by campers.

Many non-player characters will provide us with some secondary objectives. Furthermore, the sense of progression is endorsed by a system of upgrades that can be purchased in a shop. In short, Sneaky Sasquatch is a light and fun adventure, but also well structured in its design. We strongly recommend that you try it out if you have an Apple Arcade subscription. 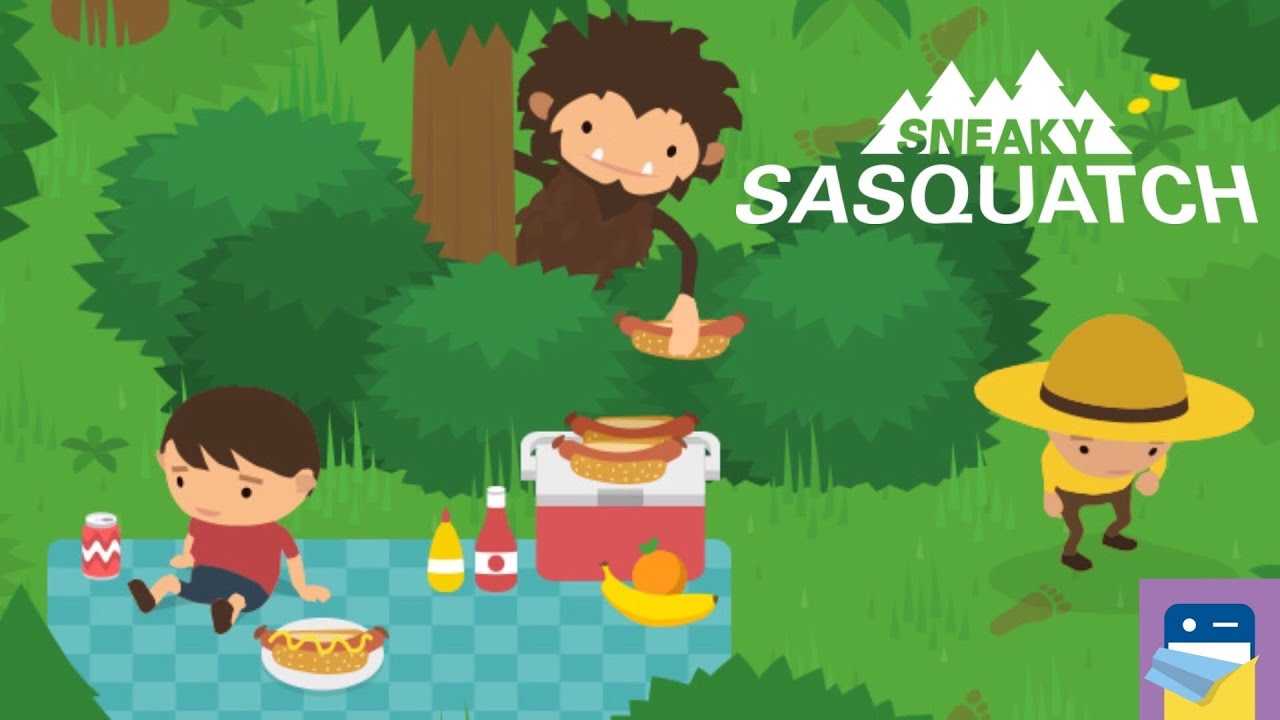 Now let’s move on to a genre that can no longer find space as it once did, but the mobile environment could be the ideal one for a new flowering. We are talking about graphic adventures, just like Tangle Tower. As the detective Grimoire and his assistant Sally, we’ll have to investigate Fiona Fellow’s death.

It will be necessary explore environments, solve puzzles and analyze objects. In addition, a large amount of dialogues will make the happiness of those who want a well-written story even on smartphones. All enriched by a pretty nice 2D graphics. It may not be what everyone is looking for from a mobile game, but it certainly enriches the possibilities of Apple Arcade users. 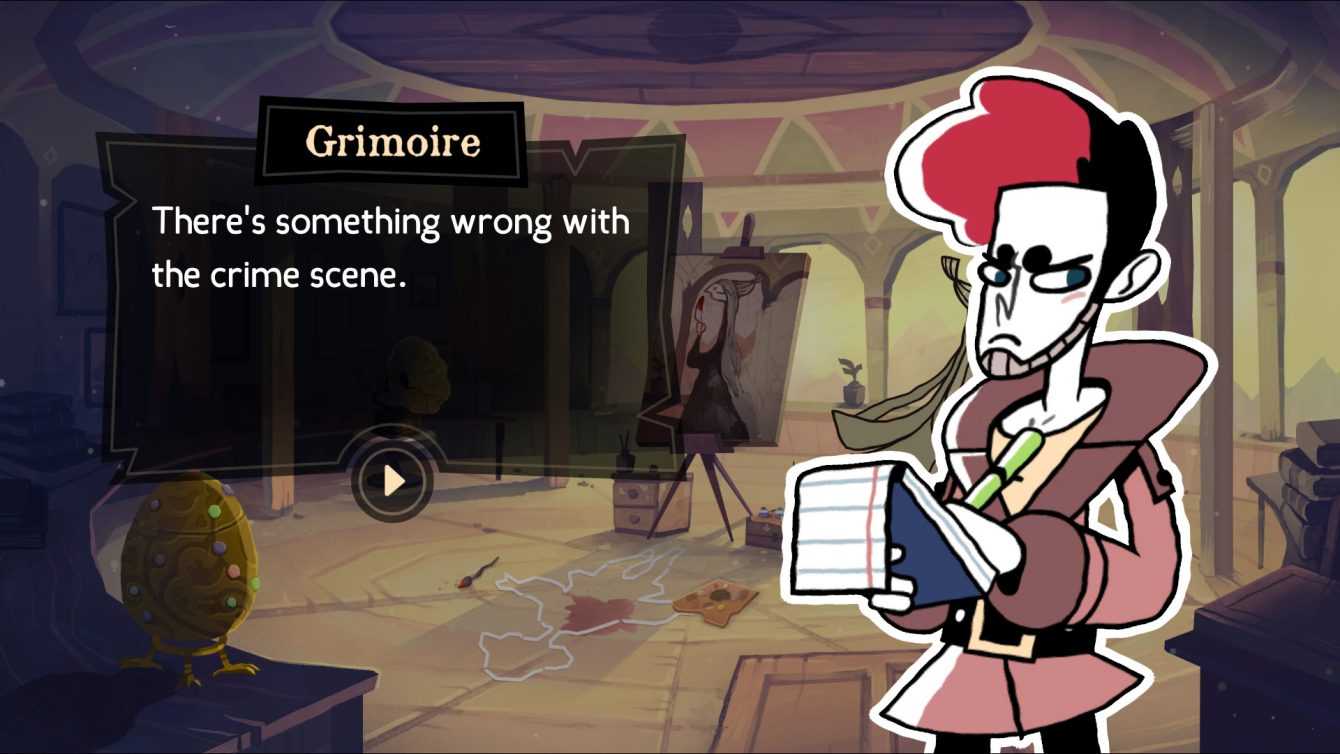