Good news for those who are waiting for the new one Huawei Watch D. An image leaked on the Net recently, in fact, shows that the smartwatch will be equipped with a blood pressure meter. More specifically, an informant posted on Weibo a photo of a box featuring the image of the watch with a rectangular display on which the results of a blood pressure scan appear. In addition, the logo is clearly visible in the lower right corner of the box HarmonyOS, which thus shows that the smartwatch will support Huawei’s operating system.

As far as we know, the new Huawei Watch D has received the medical device registration certificate Class II of the State Drug Administration. This means that the blood pressure monitoring system is medical grade. In fact, users will apparently receive notifications from the device when it is time to re-measure their blood pressure based on health management recommendations. In short, an interesting feature for the new Huawei smartwatch, which could arrive on the market already at the end of the month. 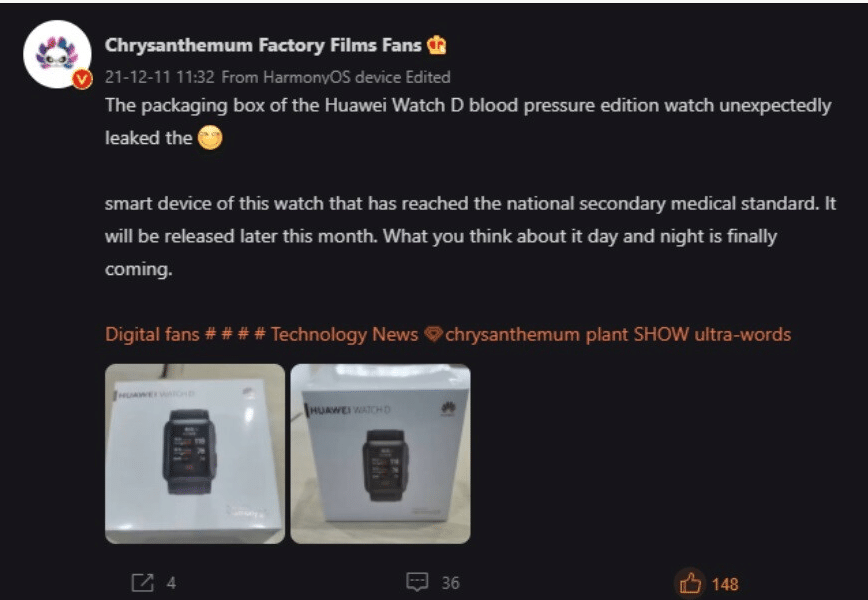 To this endowment is added, as anticipated, the HarmonyOS operating system. As you may already know, the company developed it when the US Department of Commerce listed Huawei as a company that cannot use Google software without approval. Therefore, the company has come up with HarmonyOS as a replacement for Android. And it released it first on smart TVs, then on smartphones, tablets and wearables. Now, in fact, the new Huawei Watch D will arrive on the market with the company’s operating system. And indeed, it will stand out in the industry for the blood pressure function, which is still missing in the Apple Watch. Despite being the industry leader.