Yes, you are right: at first glance Samsung Galaxy Z Flip 4 it looks identical to its predecessor.
You are not all wrong. After all, the similarities, especially aesthetic, are evident. Yet no, they are not twins. Change the beating heart, change the battery, and yes, the look of the small Korean foldable also changes a bit. We tell you all the differences in this one Samsung Galaxy Z Flip 4 review.

Traditions must be respected. Including the one that sees Samsung announce new products in the middle of summer. And so, on August 10, the Korean giant presented to the world new headphones, new smartwatches but above all the new foldables because yes, now folding smartphones are one of the priorities of the Seoul company.

This is how it arrived on the market Samsung Galaxy Z Flip 4the foldable that folds in half to become super compact and fit comfortably in your pocket.
Aesthetically we have squarer edges and some other small reinterpretations. However, the internal display remains unchanged and … the middle line can still be seen but is now physiological for these folding devices. You will therefore have to get used to it, at least until flexible display technology is completely revised in the near future.

Compared to its predecessor it is almost difficult to close and open it. Bad? It really depends. On the one hand, in fact, it gives us a greater sense of solidity and robustness, on the other hand though turn out to be a trick when you have a hand full and you have to open it. It is not impossible, however, you will struggle a little more than expected. 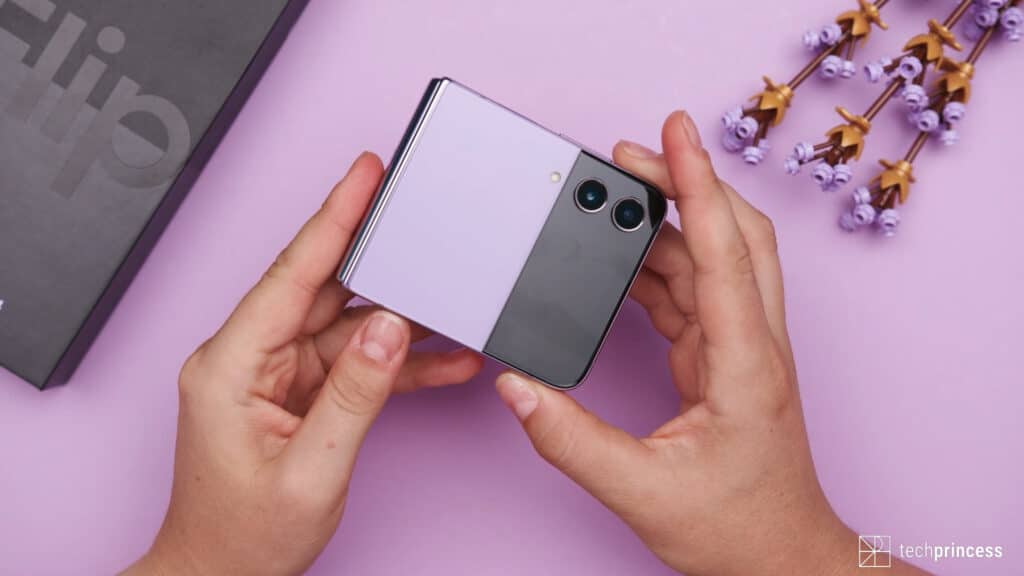 Also promoted the colors, with ours, Bora Purple, which we particularly liked. Also because the body is slightly opaque, it does not capture fingerprints in the least and does not make the phone slippery.

Finally, we point out that the small Korean foldable boasts the IPX8 certification , i.e. water resistance (soft) up to 1.5 meters deep for up to 30 minutes. On the other hand, there is no resistance to dust but this is a peculiarity of all leaflets.

We used the Samsung Galaxy Z Flip 4 for two abundant weeks, and we loved it: the new enhancements, namely the Qualcomm Snapdragon 8+ Gen 1 processor and the increased battery, which goes from 3,300 to 3,700 mAh, make it really usable, ready to take you to the end of the day, but as long as we make a normal, classic use of it.
We did 14 hours of use with 3 hours of screen, arriving at 23:46 with 10% battery. But keep in mind that we were at the sea, on vacation, so the use we made of it was less intense than usual. If you are a power user, if you use your smartphone for work, if you are particularly energy-hungry beings, then we suggest you have a powerbank or a charger with you.

On the performance front, however, we have very little to say: it is a top of the range and behaves as such. We used it to really do everything, without ever experiencing slowdowns or lag whatsoever. On the other hand, with a latest generation processor and 8 GB of RAM we expected nothing less.

And the memory? It is not expandable but this year we have an extra cut: in addition to the 128 GB and 256 GB versions we find the 512 GB version for the most demanding users.

Connectivity is also at the top, with 5G, WiFi 6, Bluetooth 5.2, NFC and all the geolocation standards you need.

How is the camera of the Z Flip 4 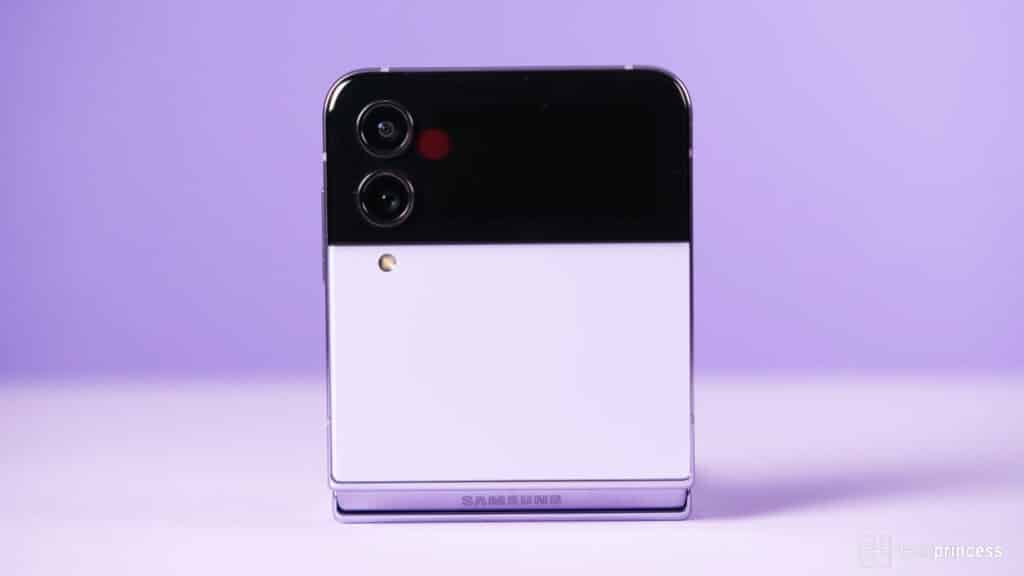 The numbers are the same and this could lead us to think that the photographic sector is exactly the same as last year: 12 megapixels the main sensor, 12 megapixels the ultra-wide angle and 10 megapixels the internal camera.
What changes – and what makes the difference – is the main sensor which yes, it has the same MPs but it is 65% brighter than in the past, with larger pixels ranging from 1.4 microns to 1.8 microns.
Let’s add the computing power of the Snapdragon processor and Samsung’s software, which together manage to improve the shots making them truly enjoyable in any situation.
During the day then we have nice colorsperhaps a little more saturated as per Samsung tradition, and excellent details even in the darkest parts. The photos in the dark make it very well with both the ultra-wide angle and the main sensor, allowing you to take home great shots even after sunset. 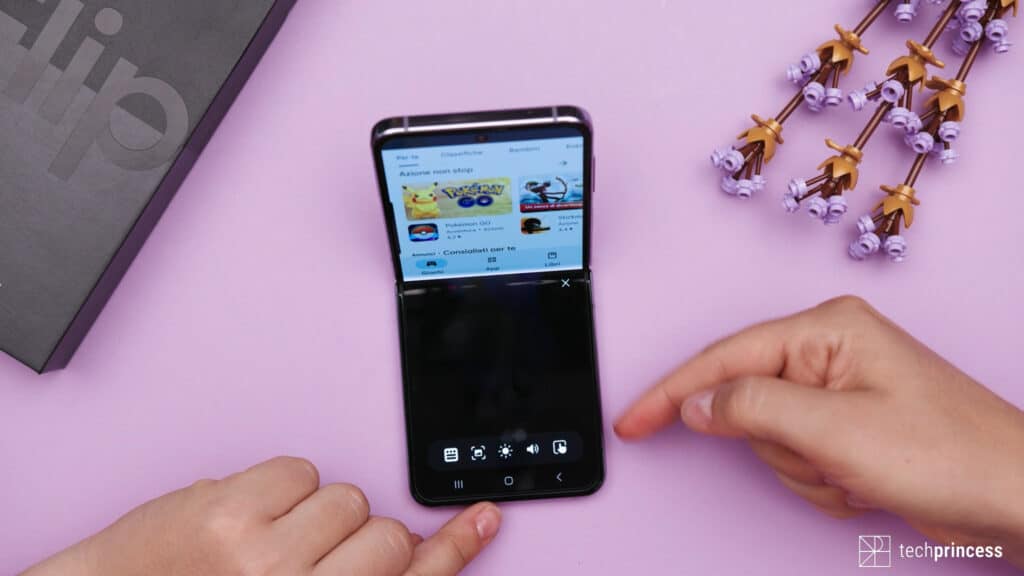 Software deserves a separate chapter. On board we find Android 12 with One UI of Samsung that on Galaxy Z Flip 4 is enriched with Flex Mode.
What is that? In essence, this is what happens once you fold the smartphone.
Some apps have a native optimization by Samsung, for those of third parties instead it will be enough to fold the device and then press the small popup that appears. You will be sent back to the Flex Mode settings and you can decide how the app should behave in that specific case.
Confused? Let’s take a couple of examples.
The Flex mode of the camera, which is called FlexCam, shows a series of new settings, while Instagram could be associated with a trackpad. 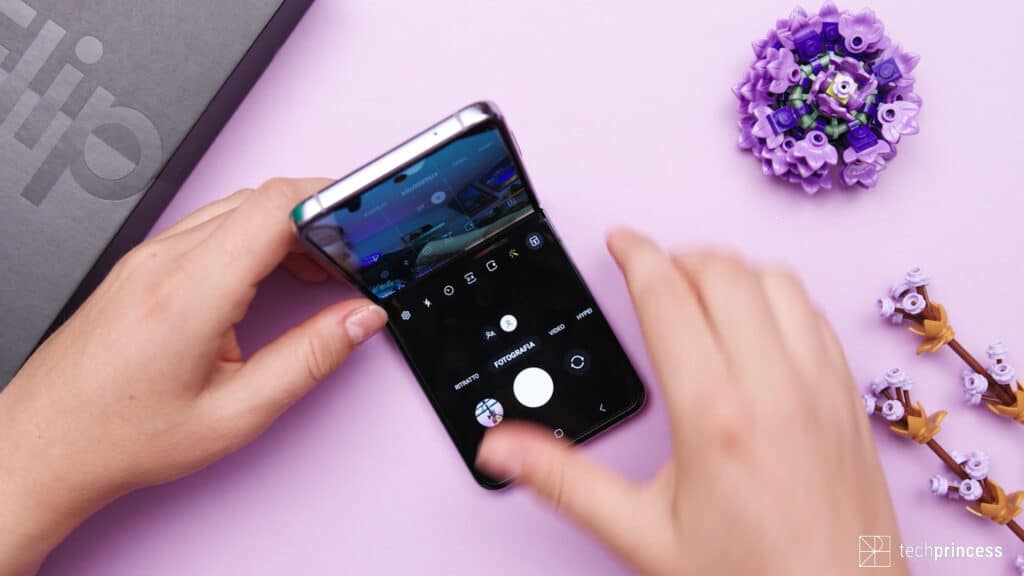 In short, Flex Mode increases the possibilities and allows the Z Flip 4 to become its own tripod, helping you to make calls, record videos and take photos, both with the main and external camera, simply by placing it on a plane. 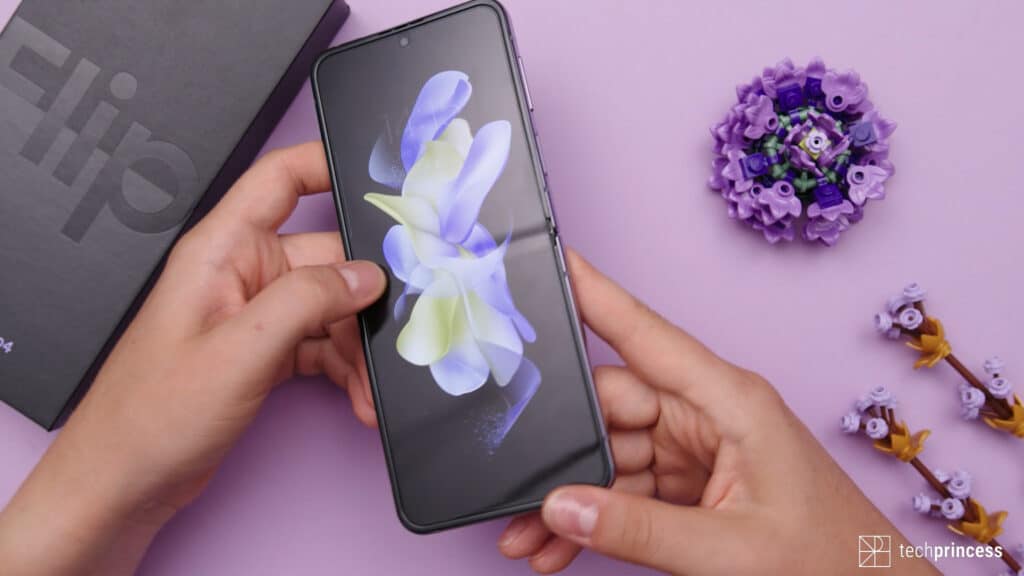 Samsung Galaxy Z Flip 4 comes with two displays.
The internal one, 6.7 inches, is practically unchanged compared to the past, so we have a Dynamic AMOLED 2X with an adaptive refresh rate that reaches 120 Hz and an excellent color rendering. The external one is always a 1.9-inch Super AMOLED but compared to the past it flaunts some additional features. 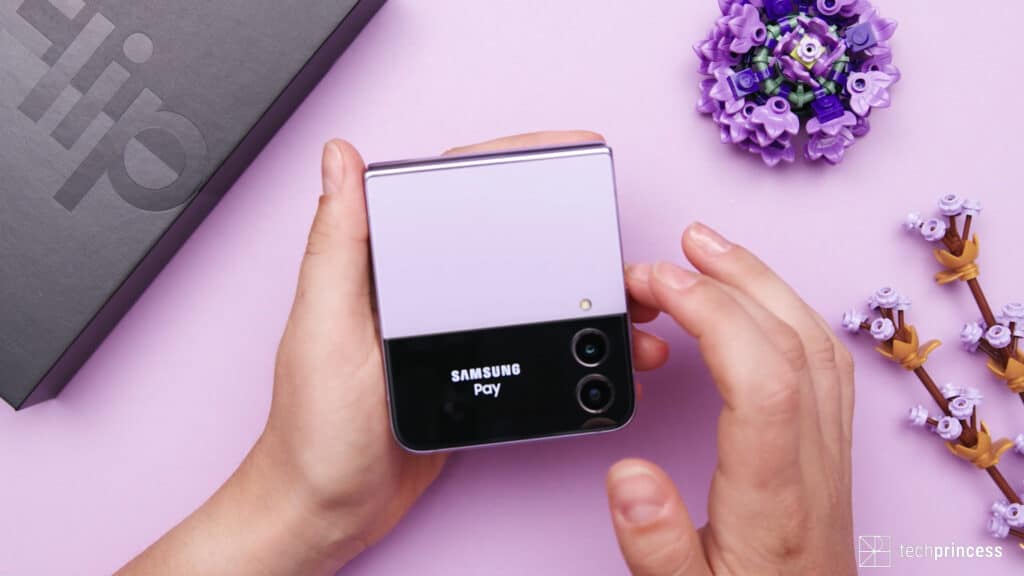 Now you can pay with Samsung Pay or Google Pay without opening the device, start video recordings, capture photos and have full previews of your shots with a double tap. They are vertical and small, it is true, but at least you can understand if you are framed and what you see. Finally, you can reply to incoming messages with dictation or with preset messages. If you want to type, however, you will still have to open the Z Flip 4, also because it would have been crazy to have a keyboard on such a small display. 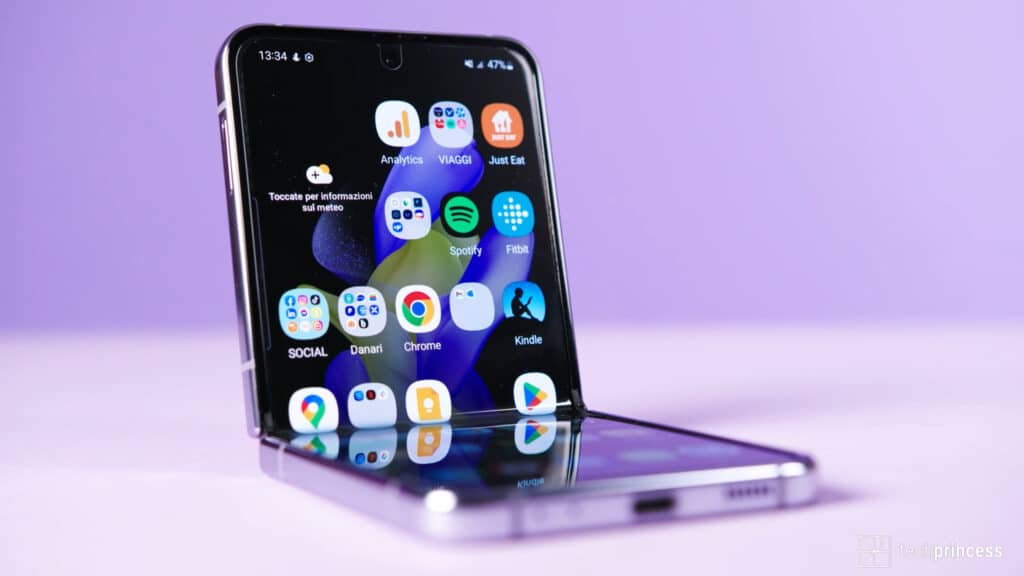 Now let’s move on to the most important part. We are talking about money because, you know, leaflets need an economic effort that is normally above average, even if, with the passage of time – and the Z Flip 3 proves it -, prices have dropped quite quickly.
Let’s go from € 1,149 for the 128 GB version to get to € 1,329 for the 512 GB cut.

On balance, we can say that Galaxy Z Flip 4 was undoubtedly improved. And we honestly believe that more than this could not be done.
The question now is: to buy or not?
As always, it depends on you and your needs. All the new improvements have made it an uncompromising device, while still aiming at a very different audience from the Fold. In short, it is less devoted to productivity and more suitable for normal, common use.