The awaited 2.0 update of Animal Crossing: New Horizons has finally arrived: here is the guide to its news

On November 4th Animal Crossing: New Horizons, the popular life simulator from Nintendo, finally released theupdate 2.0, full of news both as regards the NPC and the activities to do in-game than for items available (except those contained in the Happy Home Paradise DLC); ACNH was the most played game during the first lockdown, and had no major updates for several months (the last one dates back to Easter, for new holiday items). So here’s what to expect from this 2.0 update of Animal Crossing: New Horizons of which we are going to dissect every single content in our guide!

Bartolo, Remo: the “new” NPCs and the return of the gyroids

It’s time to great returns from the previous titles of the Animal Crossing saga: first of all Bartolo the pigeon, which reopens the café inside the museum, “La Piccionaia”. Here the player will be able to enjoy a cup of coffee alone or in the company of friends (NPC or not, thanks also to the amiibo player inside the room). Bartolo will introduce i gyroids, musical objects that in ACNH can be customized and placed anywhere.

Another return is that of Remo, a kappa (Japanese mythological being), which for 1000 Miles Nook takes the player to a mysterious island with particular characteristics: it can in fact have different season and now than the one from which we started. Remo cheers the crossing with funny songs, to which you can react by clapping your hands (or, if you are in a hurry, pressing B repeatedly skips this part).

One of the highlights of this Animal Crossing: New Horizons Update 2.0 What’s New guide is Fiorilio: the dog who lives on the island of the same name where the player can build scenarios and take pictures. Fiorilio decided to build a real “commune”, calling “friends” to help him; in this project will help him Curler, another old acquaintance for AC veterans: the pink dog with the marked R moscia will give us a new haircut for every new shop on the island.

These shops are nothing more than caravans opened by NPCs that once a week, in rotation, populate the town hall square of the main island: the camel Sahara and the carpets, the skunk Whisper and shoes and bags, the fox Volpolo with his works of art (fake and not) and a lottery with new items (at the modest sum of 500 stars per draw) and the sloth Florindo, which sells plants and flowers and provides a weeding service.

Together with them, three new ones NPC, which are not really new: Katrina, the panther, who makes predictions about the player’s future and his friendship with other villagers, the alpaca couple Alpaca e Merino, which for 10 thousand stars will customize an object of the player’s choice, and the turtle Tortimer, the former mayor of Animal Crossing: Wild World who will allow you to access the closet of the house and deposit or withdraw objects. The shops can be unlocked once a day by paying 100 thousand stars to the gyroids; just off the new square is a Stellomat, which will allow you to make transactions without having to return to the main island.

Right at the caravan of Florindo the player will be able to buy the new ones vegetables to be planted on his island: in addition to the ones already present pumpkins, arriving with the first Halloween update, are added to the list grain, potato, carrot, tomato, sugar cane. At Florindo two different types are sold each week (this weekly change is applied to all goods sold in the caravan square), but they can also be found during tours on the mysterious islands with Remo.

Thanks to these vegetables, the player will be able cooked with recipes learned through special DIY patterns and a kitchen (available from the Nook Catalog or from the twins Timmy and Tommy at the shop), combining them with fish, fruit and other easily available ingredients. The recipes can also be given away by the inhabitants, or found in bottles by the sea.

The new update also includes the introduction of ordinances, of the laws that once promulgated allow you to change the habits of the inhabitants of the island, as well as the opening and closing hours of the shops. In this guide to what’s new in Animal Crossing New Horizons Update 2.0 we will try to explain what they consist of.

The ordinance Let’s beautify the island it commits the whole community to keep the island clean and tidy, and makes fewer weeds grow; the ordinances Early morning island e Night owl island they open and close the shops earlier or later than the usual hours, and make the inhabitants get up earlier or go to bed later; the ordinance Rain of stars it raises the overall cost of items at Timmy and Tommy’s shop, but also raises the selling price of whatever you bring to them (to increase your earnings).

It storage space in the closet of the house it increases drastically: from 2,400 objects it will pass (in three steps gradually more and more expensive, the last one exceeds a million stars) to 5,000 spaces available. The storage room can be accessed not only from Tortimer, but also through an item that can be purchased with Nook miles, the closet. 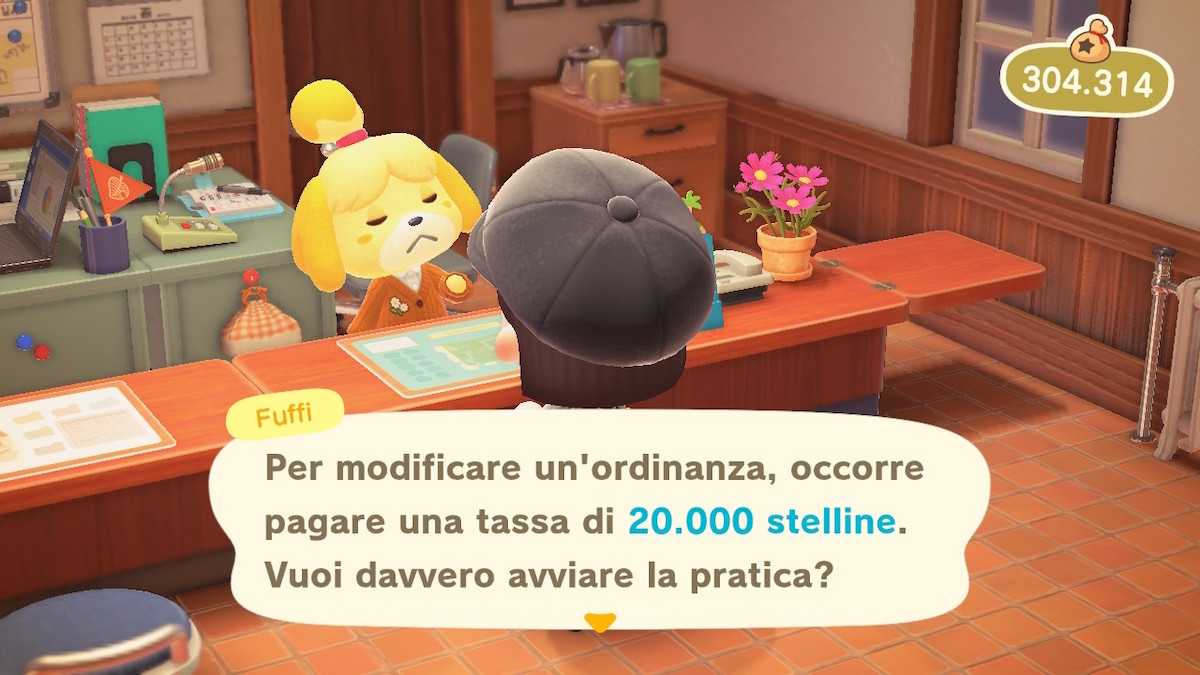 Among the other innovations there is also the possibility of to decorate the ceiling of the rooms with new chandeliers and more, thanks to License as a Decorator, available for purchase with Nook miles. The option can also be purchased via Nook miles Pro camera, which introduces the first-person camera for the Nook Phone and the Tripod option, to be able to take selfies with villagers and NPCs. Nook miles have been added to the program new items such as gazebos and rides, as well as new emotions e new haircuts.

In addition, it is possible to do stretching together with the inhabitants, selecting it stereo in the town hall square. You can use the Joycons of the Switch or the keys, if playing on a Nintendo Switch Lite. In addition, the scale a pioli to be applied to the reliefs, which can be acquired through a DIY project to be bought in the Nook’s Workshop. The inhabitants of the island can go and find the player to their home, and a new one was introduced card game, instead of that of suits and colors that is usually done with visitors to the campsite: this time it will be necessary to guess if the second card has a greater or lesser value than the first.

And you? What do you think? Are you fully playing this Animal Crossing 2.0 update that we talked about in this guide? Let us know! Remember to follow TechGameWorld.com for the latest news in the industry, and for unmissable offers on video games and similar, visit Instant Gaming!