After so many years in development we had the opportunity to preview Aquanox Deep Descent on PC, where humanity seeks a new beginning

With his latest purchases, THQ Nordic she has well earned the title of video game necromancer. Under his wing we can in fact find videogame names once considered on the verge of extinction. Kingdoms of Amalur: Re-Reckoning is a prime example, a title that we could review. But THQ went even further back in time by recovering one series born in 1996. In fact, in 2014 it acquired the rights of the AquaNox series, and today we were able to preview a short portion of the new chapter: AquaNox: Deep Descent.

A piece of history

Aquanox Deep Descent is a video game in development for the past 6 years, when the publisher was still called Nordic Games. The game then successfully tackled in 2015 a kickstarter campaign generously surpassing the initial $ 75,000 target. Since Aquanox Deep Descent has changed considerably, becoming the game that we had the opportunity to preview today.

However, we couldn’t get our hands on two things. The game integrates the ability to play the main campaign in co-op with two other players, who according to the developers, can enter at any time. Finally there will be a modality pvp online. But let’s not hesitate any longer and find out what the AquaNox seas have to offer. 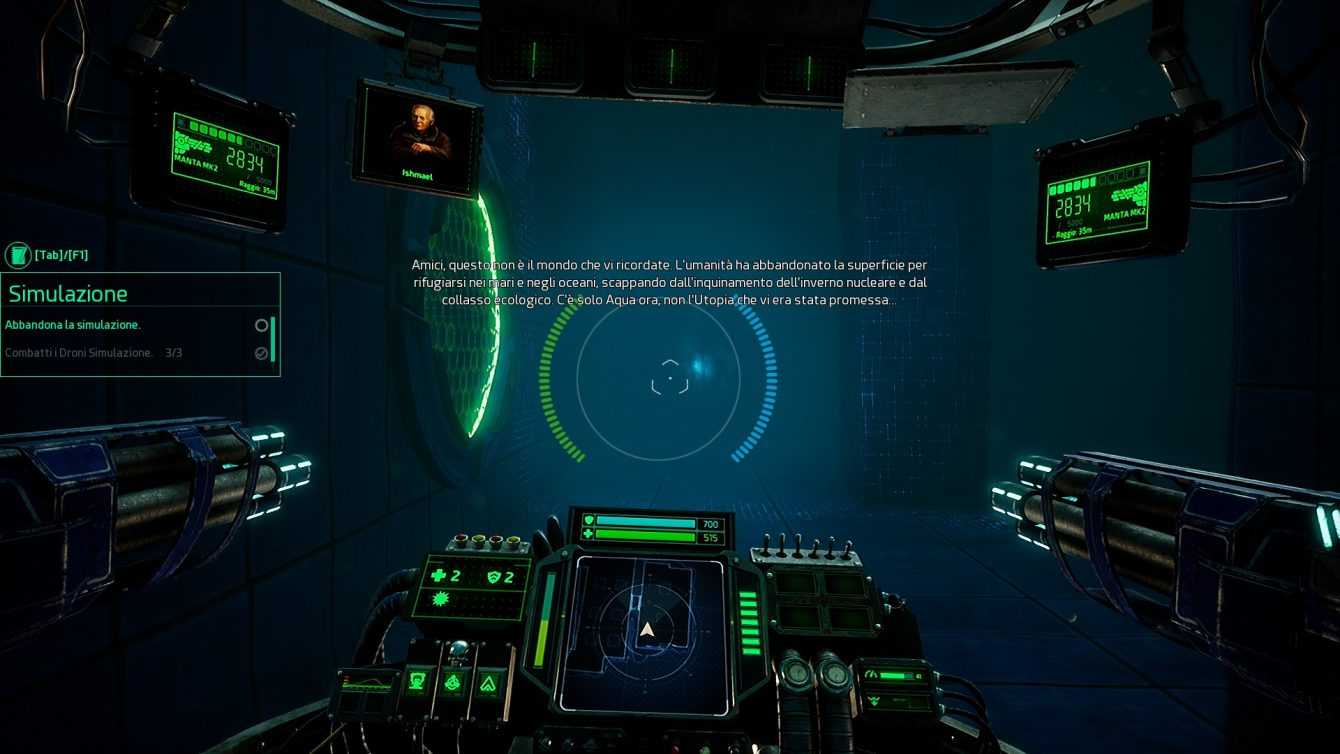 Deep Descent faithfully takes the narrative foundations from the world of AquaNox. Many years before the events recounted in the game, the world was struck by a series of ferocious nuclear wars, for obtaining the last resources on earth. Life on the surface became impossible, so the survivors decided to restart civilization under the sea, taking advantage of the remarkable futuristic technologies in their possession.

This decision gave humanity a thread of hope, a solution which, however, could not be definitive. Here comes the Nammu project, capable of revolutionizing human life and led by our protagonists, including mercenaries and expert scientists. This brief introduction is not shown to us with typical cinematics, but thanks to a series of animated illustrations of exquisite workmanship. At its conclusion we are immediately catapulted into the game. 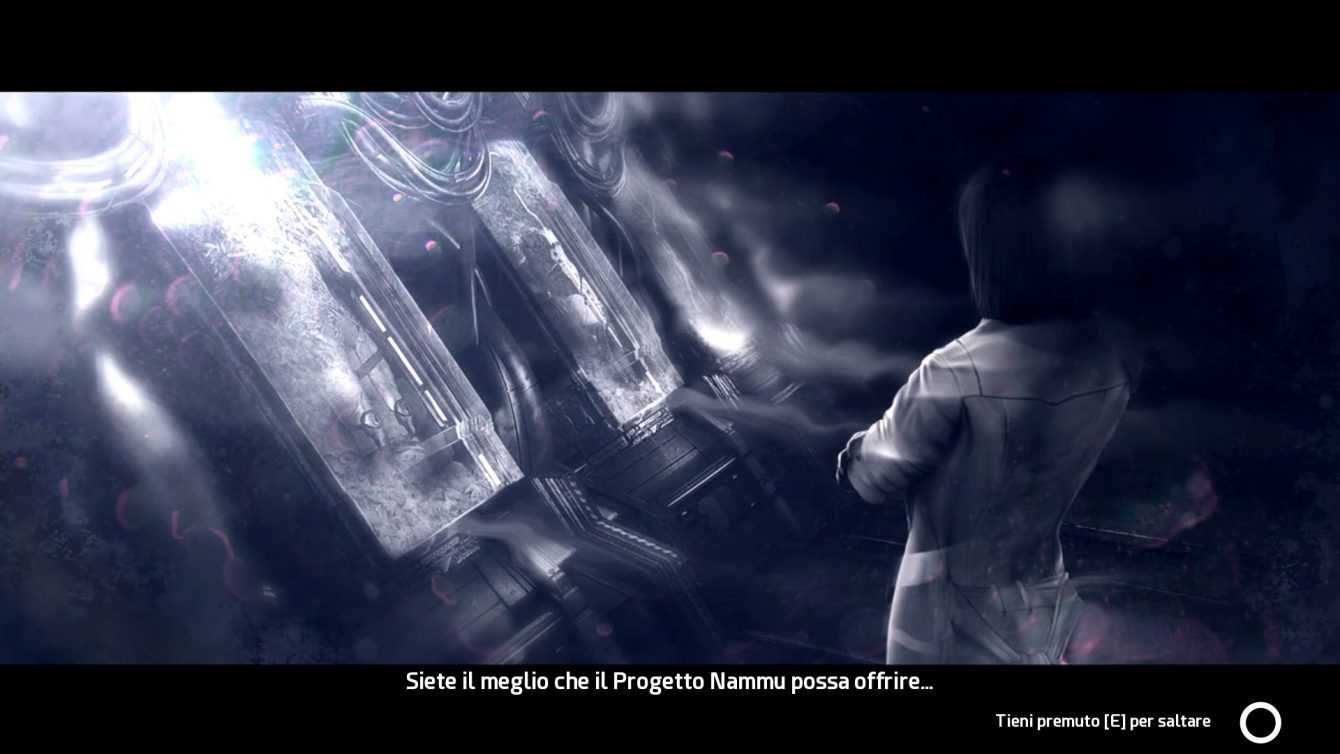 Inside our submarine the first thing we notice is the controls halfway between simulation and arcade. By pressing one of the WASD keys we accelerate, with the position of the pointer we define a direction and with Space and Ctrl we go up and down. Controls to which we need to get used to it because, being underwater, we will move with a certain slowness and heaviness. However AquaNox wastes no time and after briefly following the mothership, we are attacked by a flock of meduse verdi bioluminescenti.

Obviously we will have to attack them to survive and luckily our ship is equipped with two weapons: on the left click we have one machine gun while on the right a Shotgun. Pair that allows us to counteract the ambush of green creatures and that teaches us some important lessons. Among these is the difficulty not too high of the game and the fact that throughout the experience we will be dealing with a 360-degree world, where enemies can come from any direction. As soon as we repel the attack we are sent to destroy the jellyfish nests.

Their search will lead us to freely visit the game map, but it is not an open world, but rather looks more like a open map where it is possible to explore freely until its limits are reached. At that point we will be faced with rock walls or toxic areas that we cannot cross. Scattered around the map are materials and resources to be obtained to stimulate our desire to explore. Useful for forging new ammunition or healing tools. 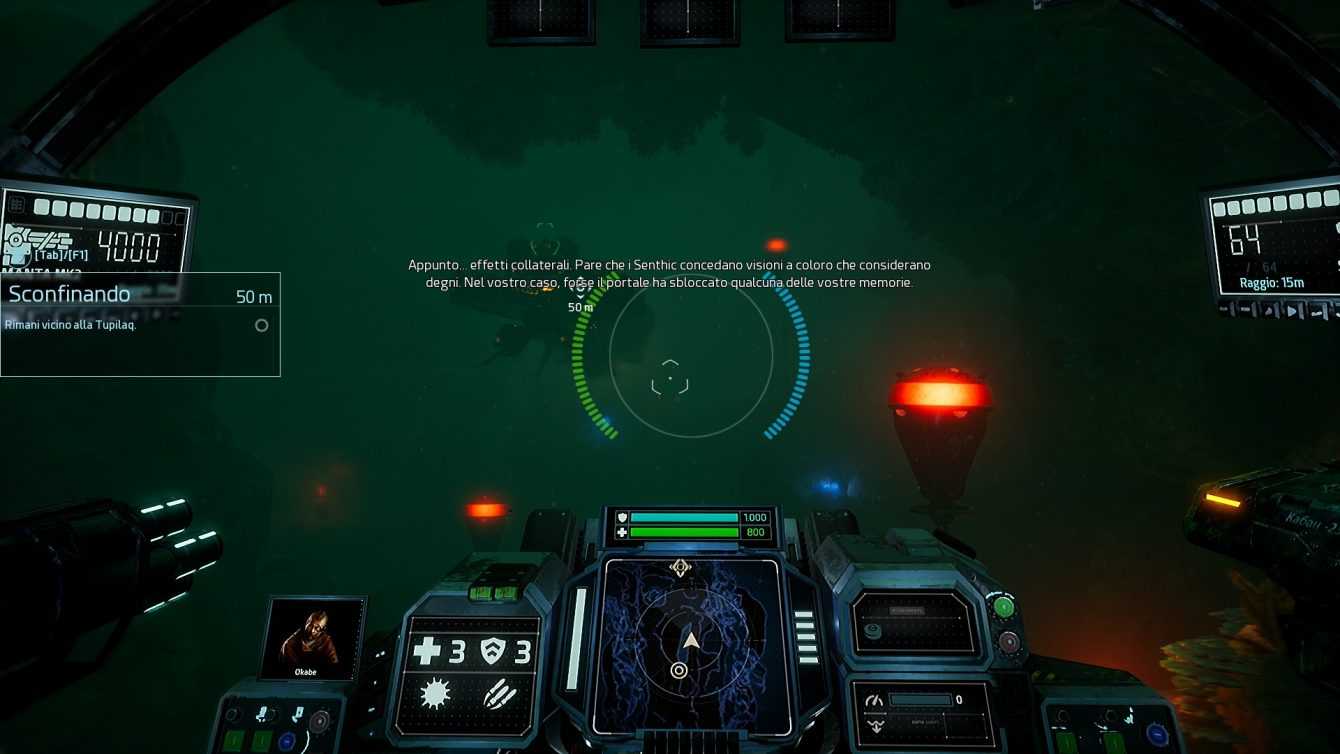 After this phase we will be able to visit an underwater station. In this place we will no longer be in our cockpit, but we will not be in control of the character anymore. The station looks more like a large interactive menu where you can change and customize our submarine, use the shop and meet new characters. In this preview we were able to test two different ships. The initial one has statistics that can be considered as standard, while the other was smaller and faster. Both had cockpits with different aesthetics and presumably there will be more.

In the station it is possible change the color of the spacecraft and equip it with new weapons. In addition to the shotgun and submachine gun, we had an energy cannon capable of killing with a single shot, and a rifle loaded with magnetic bullets. Later we decided to visit the local restaurant. Here we have advanced the main storyline with an automatic dialogue and fully voiced in English.

Always in the room we had the opportunity to speak with another customer. Dialogue that turned out to be extremely brief, which however presented us with a choice: offer him a drink or respond in kind to his passive-aggressive attitude. Luckily for us, we were kind and offered a ship upgrade in exchange. This was the only secondary branch and decision of the preview, however we hope that in the final game we will be able to face more complex situations and less ends in themselves. 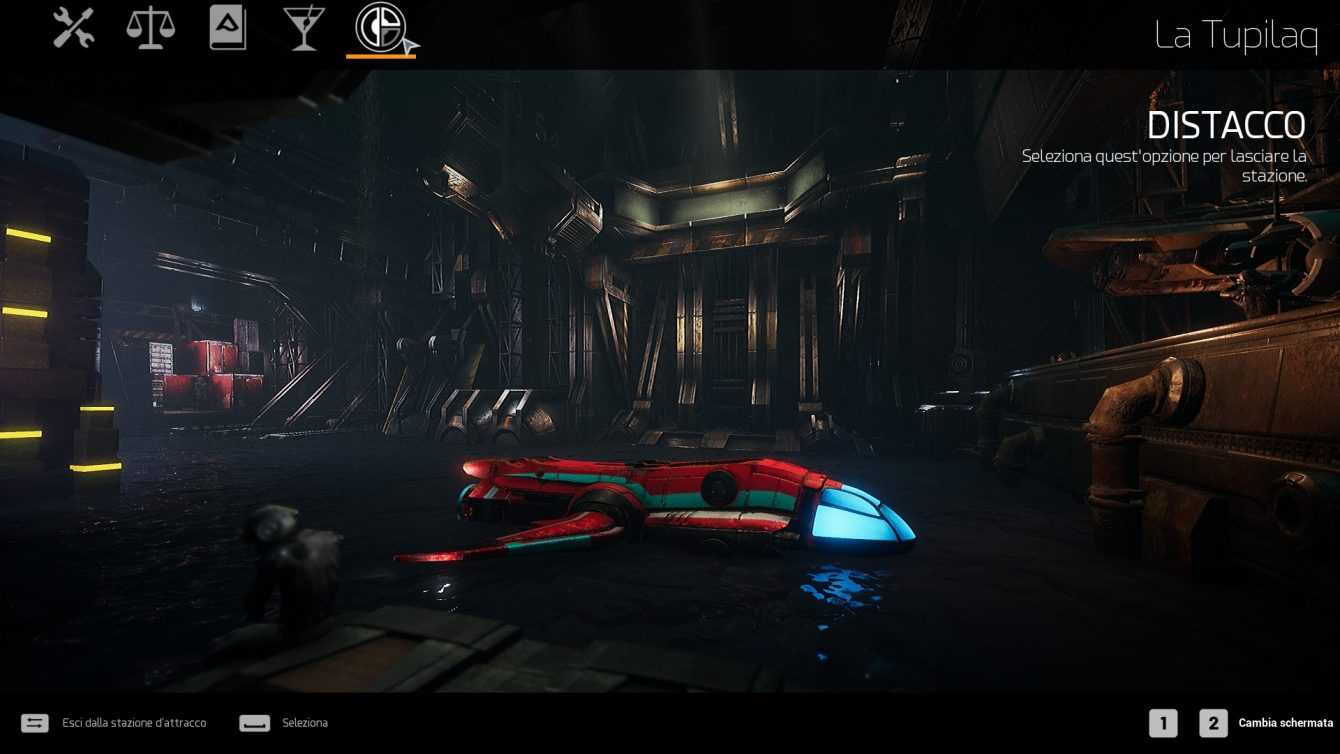 In the next step we exited the station and headed to the next map through a high speed portal. When we reached our destination, we accompanied and followed a mining ship, engaged in analyzing a mining site. Suddenly we were attacked by several hordes of pirate ships and contaminated animals, which we shot down one after another.

Given the low speed of the underwater ships, unfortunately we were unable to engage them in “aerial combat” shows, but it was more like a stretch of quick targeting, lock-on and enemy detection exercises on the radar. But just when AquaNox was starting to get interesting, the preview stopped abruptly leaving us several positive thoughts, but also some doubts about the future of the game that we will discuss at the end. 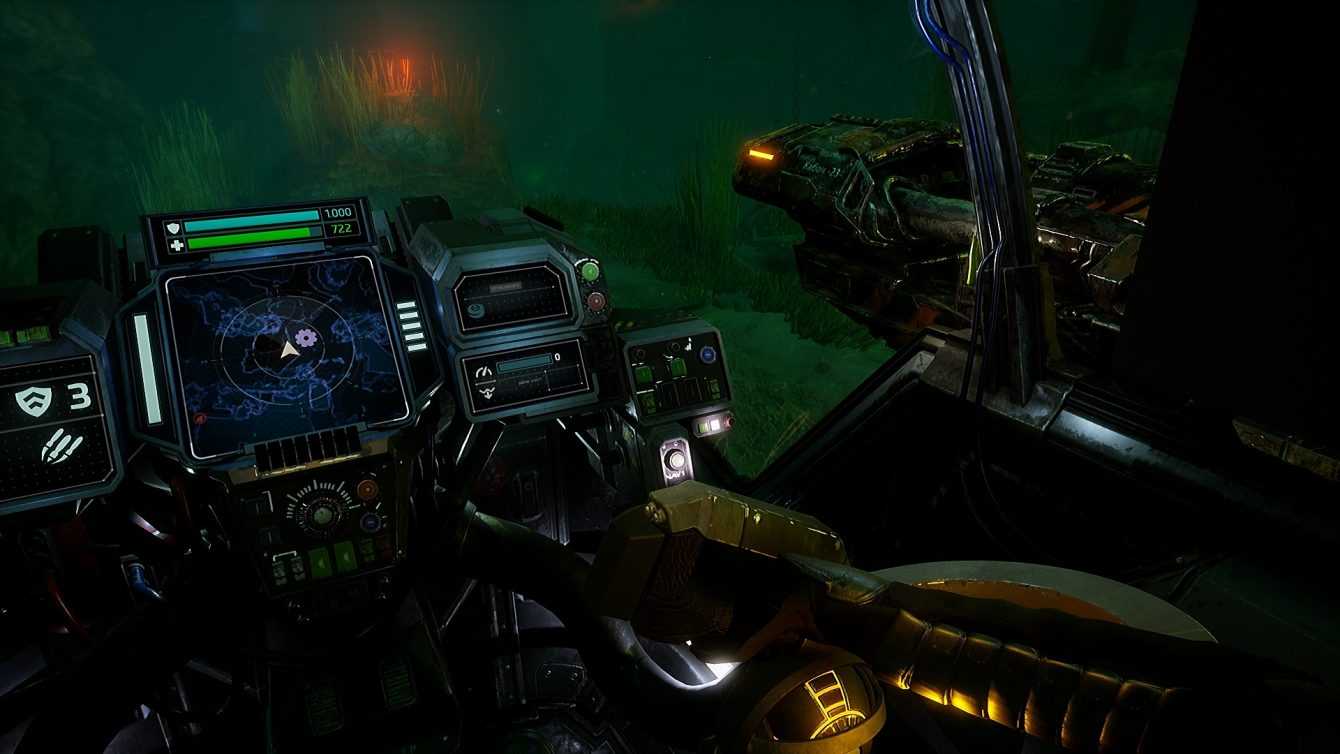 The visual impact is both striking and flat. The cockpits of the ships are cared for down to the smallest detail and although the screenshots may suggest otherwise, they do not disturb the view much. This is due to the fact that they have their effective communicative utility as an integral part of the game interface. However, some messages will stack on top of each other, making them unreadable.

On a graphic level, we were not entirely convinced. The environments, however perceived the intent to convey a feeling of oppression and gloom, end up seeming not very original and exaggeratedly “foggy”. To illuminate our crossings there are many bioluminescent algae and small lighthouses, but which do little to enhance the areas in which we find ourselves.

The audio sector is very respectable as regards the sound effects, what is different is the dubbing. Our teammates, who are mostly inside the base, we will hear them talking very often keeping us company. The dubbing isn’t the best, however, but there is such B-movie exposure that we inevitably loved it. Underwater pirates in particular will threaten you with tones and dialectic from cartoon enemies of sunday. For a few moments we thought we heard a nostalgic “do a barrell roll” echo from beyond space, but it was just a mirage. 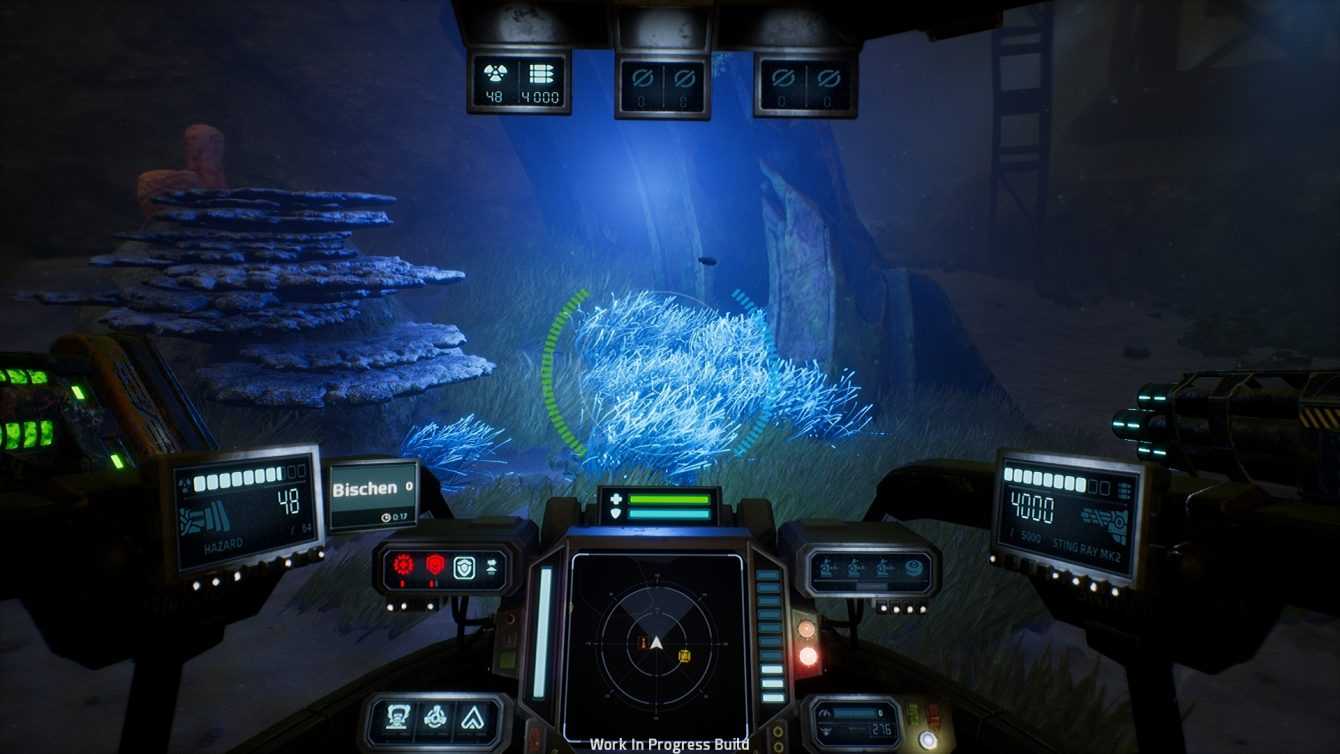 In conclusion Aquanox Deep Descent has made things difficult for us with this one so short preview. Despite the slowness of the spacecraft, the test did not go beyond two hours of play. The contents to be analyzed were therefore minimal and the general view limited. However it is a video game that it is being built on a solid foundation. In fact, we did not encounter any technical problems and the game always remained at 60 FPS without stumbling. The dialogue system works and we hope it will be exploited properly with interesting narrative choices and branches. The fights as tight as they are, are fun and properly express both the arcade and simulation nature of the game.

The game of this preview, Aquanox Deep Descent, should be released in 2020 on PS4, Xbox One and PC. To stay up to date on video games and technology, we recommend that you continue to follow us on the TechGameWorld.com pages.