We finally have the official confirmation: Fortnite’s next big musical event will feature pop star Ariana Grande. The singer-songwriter will perform on the occasion of the Rift Tour, while her performances will be distributed over the course of three days, from 7 to 9 August. Let’s see how to participate in the shows and what rewards they offer.

Fortnite concerts aren’t over. The famous battle royale returns to host internationally renowned artists and this time it is the turn of Ariana Grande, which will be hosted by the game on 7, 8 and 9 August. The singer will appear in the game via an avatar with his likeness and it is only the latest in a series of authors who have alternated in the online gaming rooms, as an initiative to bring live music to people even during the pandemic.

This initiative was in fact inaugurated by Travis Scott last summer, in the middle of the first wave of Covid-19, and was so successful with fans that it convinced Epic Games to make contact with other artists as well. The Ariana Grande concert will be completely free and will take place on a server entirely dedicated to the event.

Here are all the Italian dates of the appointments, which in addition to the show itself will also offer unique rewards, not yet announced:

As on any other occasion of this kind, the Epic Games team advised players to be found within the game about an hour before the event, so you can calmly participate in exclusive challenges and activities to complete to unlock new aesthetic elements for your avatar.

To participate in the event, simply select the appropriate section that appears in the main menu of the game, and from there select the correct date of the event in which we want to participate. Of course the event is open to everyone, but if one show was sold out, Epic Games invited players to wait for the next one, so as not to clog up the game playlists.

If we instead take a look at the skins dedicated to this event, we find the artist’s costume and the decorative back Piggy Smallz. If, on the other hand, we complete the Rift Tour tasks, we will unlock the Cosmic Cuddles loading screen, the Splashing spray and the Cloudy Cat emoticon.

An opportunity for artist and fans

Last summer, Travis Scott’s gig turned out to be much more profitable for the rapper than for Epic Games, as Scott earned well 20 million in total on that occasion. Numbers that were mainly achieved through merchandising and themed items in the game’s store, on which Scott probably had a percentage. 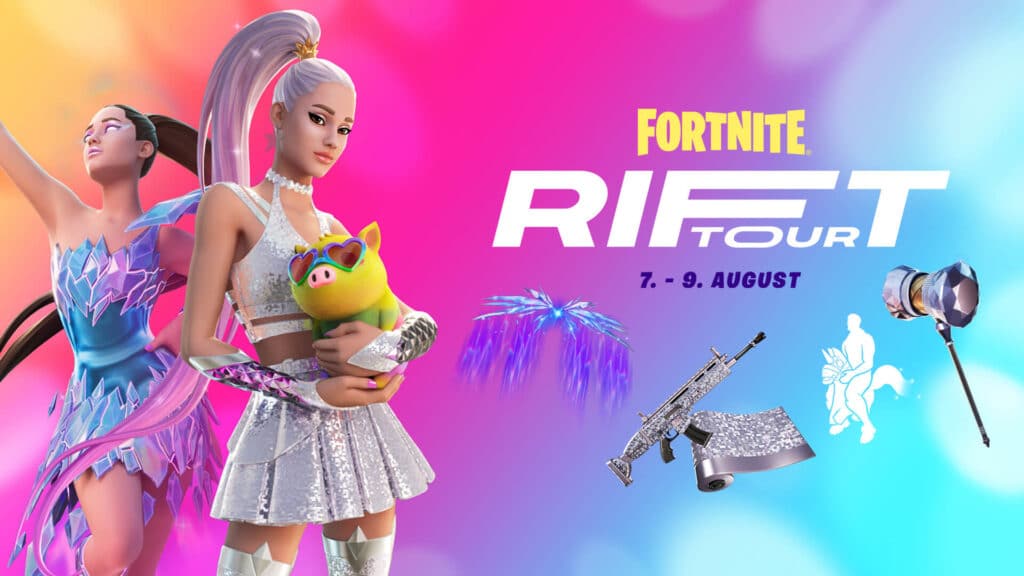 Ariana Grande is a far more famous and universally known artist than the US rapper, not to mention her much longer career. It would therefore be fair to say that the Fortnite digital stage is also an opportunity for the artist herself, who on the one hand has the opportunity to perform in a concert at practically no cost, since everything is organized online, and secondly because in this way he has the opportunity to approach new bands of potential audience.

Not to mention that in this way the singer will not suffer the pressures typical of “real” performances, since her movements will be mostly managed by the Epic Games team. In short, both for fans and for Ariana Grande, the artist’s concert on Fortnite is an opportunity not to be missed.