The Siege of Paris is the second expansion of Assassin’s Creed Valhalla and takes us exactly there, in the heart of the French capital. But don’t expect to stroll around the most romantic city in the world. The Paris of Valhalla is devastated by the plague and the rats that lurk in the basements and drains, ready to attack you, while on the upper floors Eivor – the undisputed protagonist of the game – tries to avoid a bloody war between Charles the Fat and Sigfred.

Between new characters and some interesting gameplay news, here’s everything you need to know about Assassin’s Creed Valhalla: The Siege of Paris.

Vikings always help each other. This is what we learned after hours of playing inside the world created by Ubisoft. Of course, they are not always nice little people and they don’t always do it just out of a good heart but if there is a threat they tighten ranks and overwhelm the enemy. And they ask for help. A behavior that is not taken for granted even today.

It is with this spirit that Toka, second in command of the clan of Elgring, si reca a Ravensthorpe: Charles the Fat – Charlemagne’s great-grandson – is ravaging France and trying to drive out the Vikings but Sigfred, the leader of the Elgring, does not intend to surrender and decides to send Toka to Britain to seek new allies. Eivor does not hold back. After all, the king of France could decide to expand beyond the English Channel and at that point stopping it would be even more difficult and would put the lives of all the inhabitants of the four main regions, Mercia, Anglia, Northumbria and Wessex, at risk. 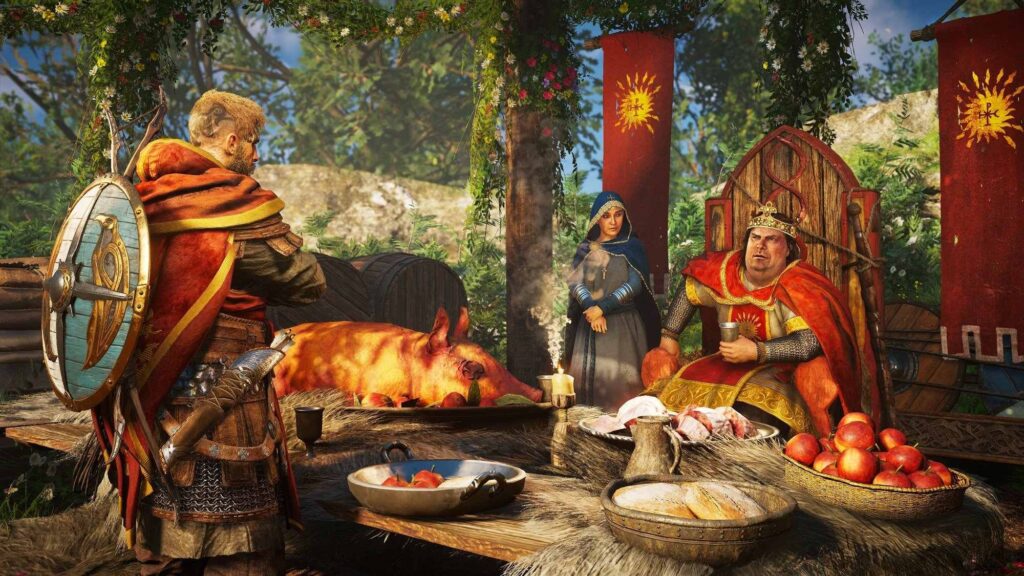 To welcome Wolf’s Bite we will find two different factions: on one side the Viking Sigfred, impulsive and bloodthirsty, on the other Charles the Fat, aided by Count Odo and accompanied by Queen Riccarda. If the names sound familiar, then you have a really good memory. What the new Valhalla expansion tells is a true story. Or rather, it is a story that was built on the basis of real events. In 886 an impressive fleet of Viking ships besieged Paris. The count of the capital, Odo, succeeded in informing Carlo il Grosso who summoned that he called an assembly in Metz where it was decided to help the city.
The first attempt, however, was unsuccessful. Two months later, Charles went to Paris with the army but, instead of unleashing his soldiers, he decided to make an agreement with Siegfried, leader of the Vikings. The siege ended with the payment by the emperor and king of France of 700 pounds of silver and permission to go up the Seine to spend the winter in Burgundy.

In the enemy lair 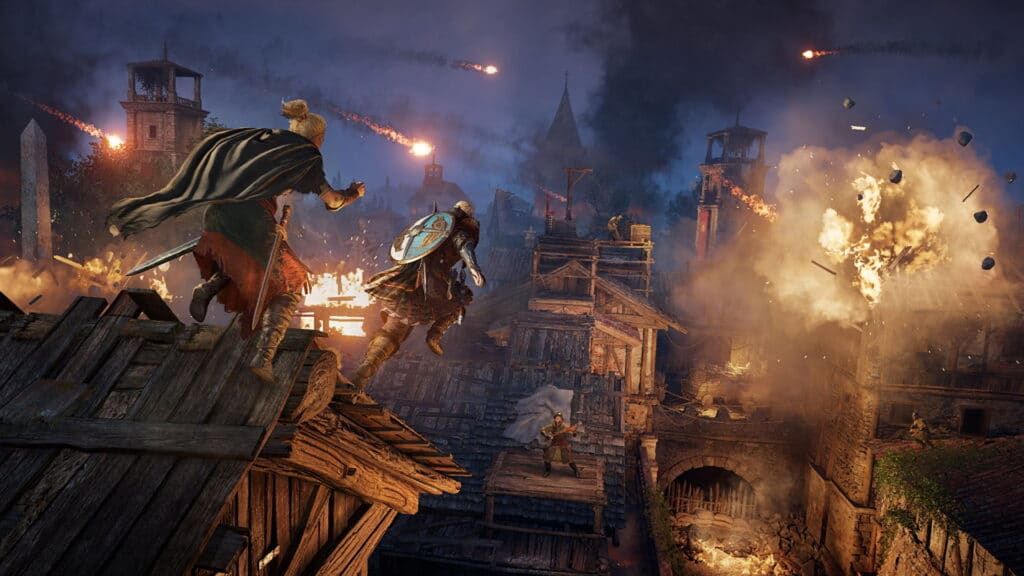 The Siege of Paris, with its intrigues, well-written characters and determined showdown, it will keep you glued to the screen for about 12 hours. There aren’t a lot of them, that’s true, but Ubisoft has done everything in its power to give players some variety. With this goal in mind, the French publisher has decided to revive the infiltration opportunities and special assassinations. It is an already present mechanic of AC Unity and Syndicate that allows you to analyze the environment to find alternative ways to enter the enemy lairs and thus reach the final goal. Then by carrying out a series of additional tasks you will have the possibility to activate the special assassinations that give spectacularity to the killing of Eivor. Too bad that the number of infiltrations is limited: there are 5, few for fans of the series but certainly proportionate to the duration of this DLC.

Among the novelties we also find the Rebel missions, with Bite of Wolf who finds himself leading a small group of dissidents. Too bad that the assignments quickly become repetitive, tied only to killings and the retrieval of information. But this doesn’t mean you should ignore them: the Rebel missions allow Eivor to earn Infamy points with which to unlock upgrades for both troops and Wolf’s Bite. 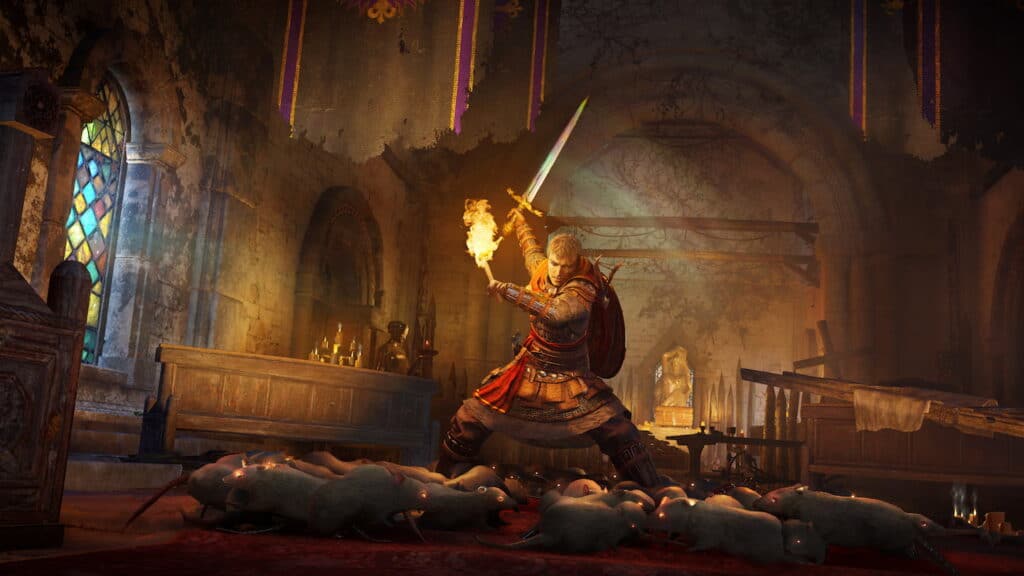 They deserve a special mention too the rats. Disgusting, aggressive and infected, the Paris rats are a new enemy to fight. Literally. Getting caught by rats means dying so make sure you always have a weapon with which to kill or drive them away. On the other hand, they can turn into precious allies: freeing the rats can put enemies in difficulty and help you escape. Consider them a sort of additional weapon which, however, can suddenly backfire.

For the rest, the setting of Assassin’s Creed Valhalla: The Siege of Paris it does not give peaks of originality. The territory at our disposal is certainly more restricted than what we saw with The Wrath of the Druids, the previous DLC; Furthermore, the France of Charles the Fat is more compact and decidedly less suggestive albeit full of activities. The only real flaw remains artificial intelligence, which continues to not shine and remain annoyingly naive.

Assassin’s Creed Valhalla: The Siege of Paris review. Is it worth playing with?

The Siege of Paris it could certainly have given us some more satisfaction, even in the face of the enthusiastic presentation reserved for this expansion, but overall it delivers a dozen hours of really enjoyable gameplay, primarily thanks to the plot and the new supporting actors but also the return of popular mechanics such as infiltration opportunities. It’s not perfect but if you want to continue living as Eivor it’s worth giving it a chance.