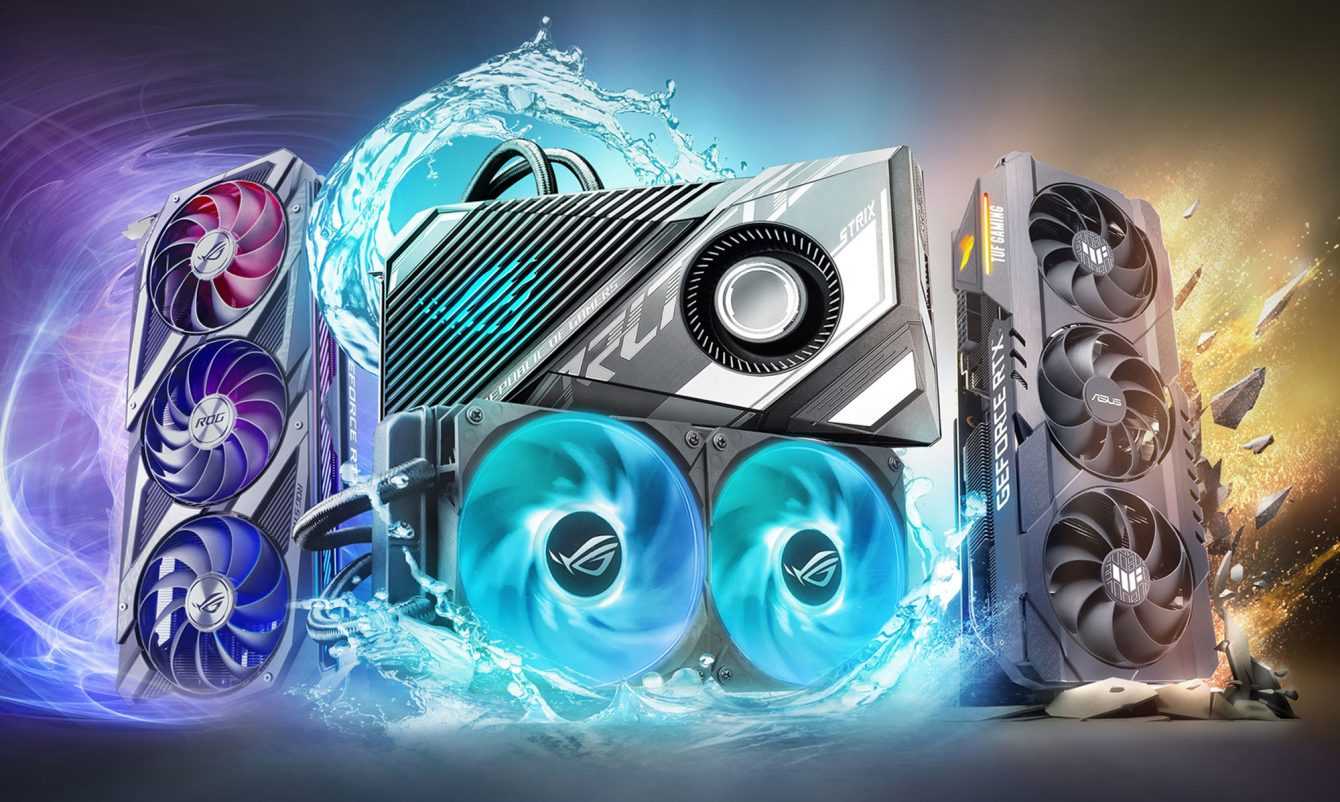 Custom versions of GeForce RTX 3080 Ti and RTX 3070 Ti made in ASUS are on the way. The ROG Strix LC, Strix and TUF Gaming models offer advanced performance, with both liquid and air cooling

After the presentation of NVIDIA, ASUS announces the arrival in Italy of a brand new series of graphics cards based on the latest NVIDIA GeForce RTX 3080 Ti and GeForce RTX 3070 Ti GPUs. The board GeForce RTX 3080 Ti offers an incredible leap forward in performance and fidelity with acclaimed features such as ray tracing, AI that improves performance NVIDIA DLSS, reduced latency NVIDIA Reflex, NVIDIA Broadcast streaming capabilities, and additional memory that allows it to speed up even the most popular productivity applications. And in the lively mid-range of the market, GeForce RTX 3070 Brings you more CUDA, RT and Tensor cores.

To harness the potential of the GeForce RTX 3080 Ti GPU, ASUS turned to a solution that PC builders around the world already know and love: liquid cooling. The union of speed and style of this card starts with unique design and adressable RGB LED accents that shine through the different cuts on its surface. The metal part presents itself with a clean look where the classic ROG cybertext texture is present and integrates perfectly with the RGB lighting.

Under the body, a Full coverage custom water block transfers heat from the GPU and GDDR6X memory directly in a liquid cooling circuit rather than inside the case. The coolant passes through 600mm extra long hoses to a 240mm radiator. The length of these tubes, combined with the wide 240mm radiator compatibility, allow enthusiasts to confidently install the ROG Strix LC GeForce RTX 3080 Ti in even the most complex builds. This versatility also allows you to find the best airflow path, the radiator can be mounted on the top of the case to allow heat to be expelled by completely bypassing the inside of the case, or at the front with the fans configured inward.

The liquid cooling circuit is the centerpiece of the ROG Strix LC GeForce RTX 3080 Ti, but the fans are also a key part. One pair of 120mm custom designed, optimized for both high CFM and high static pressure, keep high levels of air moving. A low-noise fan under the card casing cools a low-profile heatsink to ensure crucial components remain low temperatures under demanding workloads or with overlock. ROG Strix LC GeForce RTX 3080 Ti also leverages intelligent card fan control that can be extended to two case fans using one FanConnect II header pair. Thanks to FanConnect II you can monitor the temperature of the graphics processor itself to increase the overall airflow just when it is needed, so as to obtain optimal temperatures during long gaming sessions. 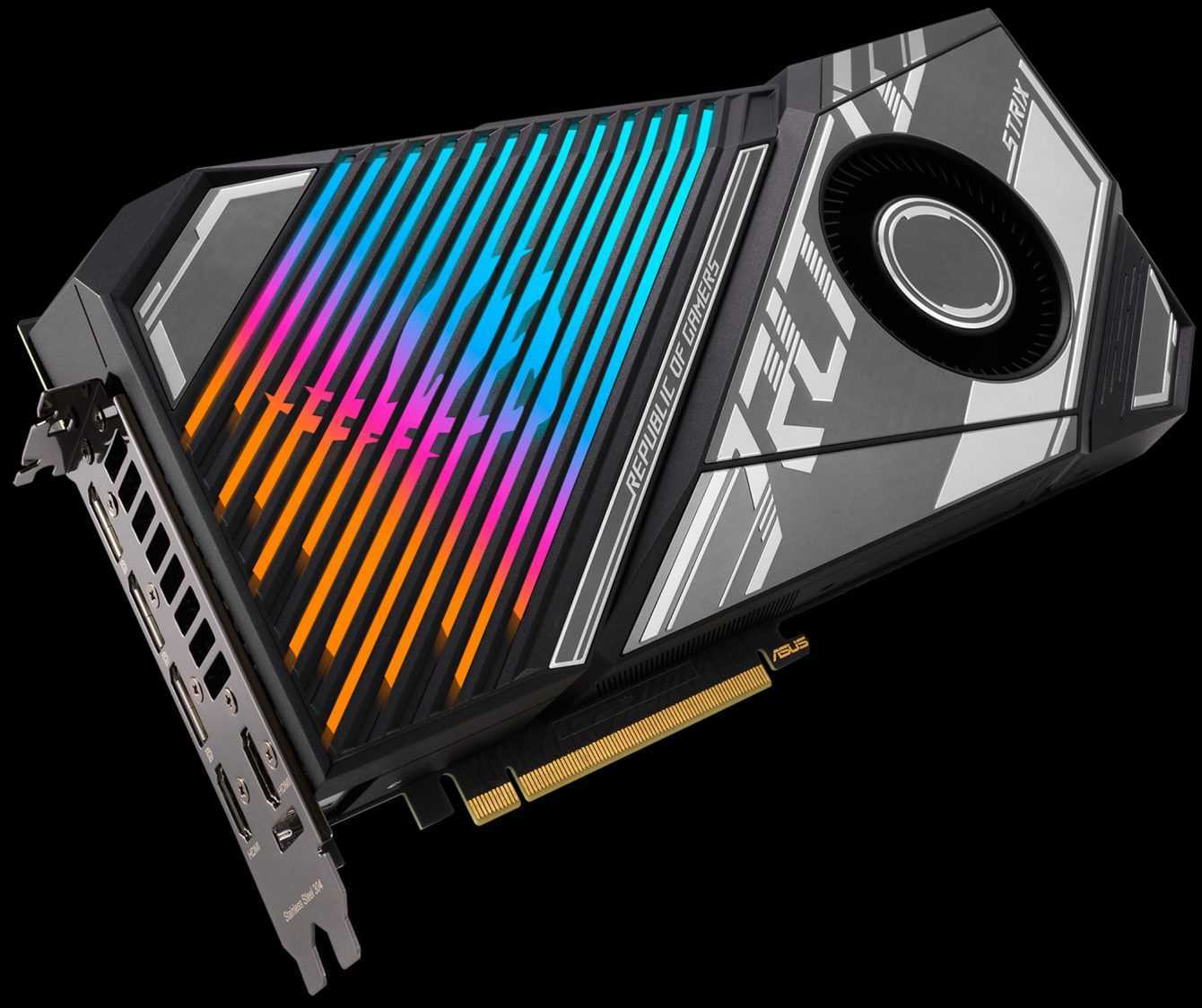 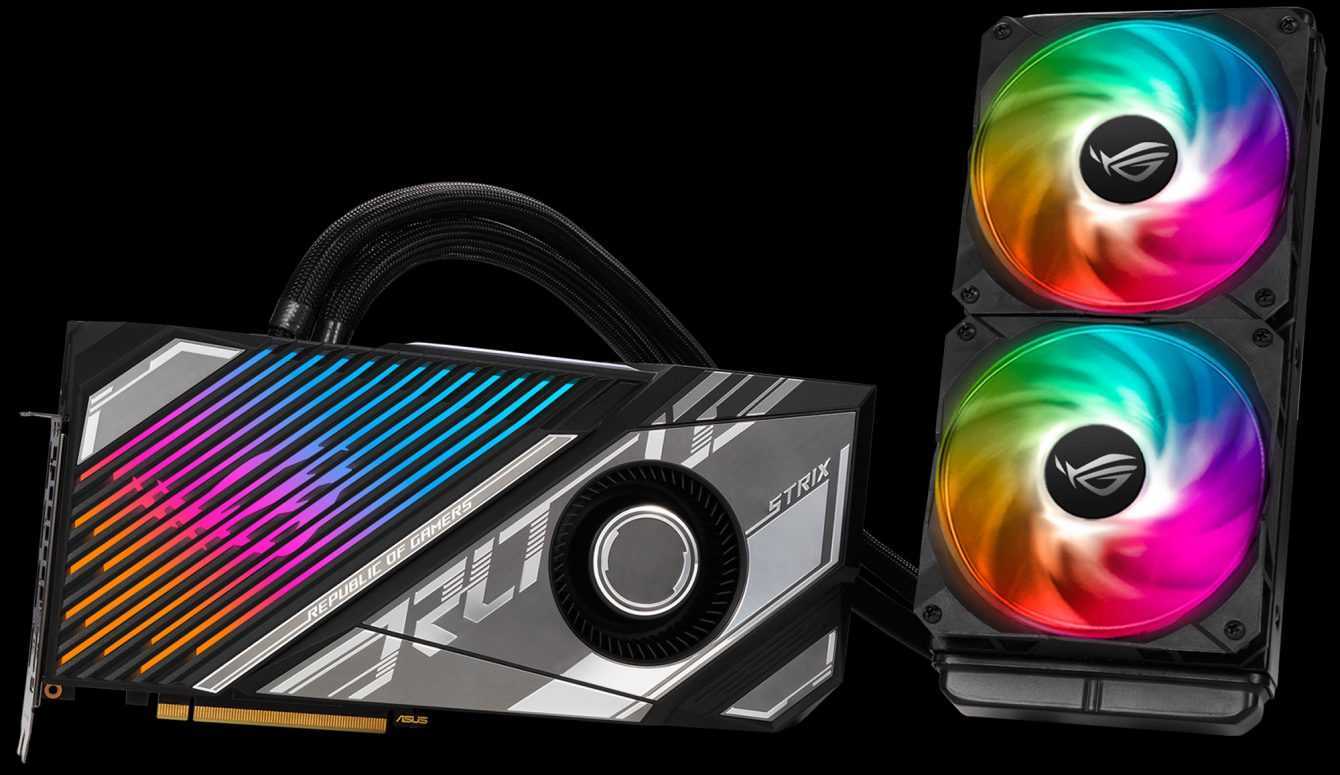 ROG Strix GeForce RTX 3080 Ti and ROG Strix GeForce RTX 3070 Ti boast the latest innovations and refinements in air cooling. A huge 2.9 slot heatsink comes wrapped in an angular case with an adressable RGB LED array full length on the left edge, for an undeniably beautiful and unmistakably ROG look. The new look extends to the metal back plate, where contrasting textures and subtle monochromatic shades surround a highly functional cooling cutout that allows airflow to rise and fit into the natural airflow path of the case.

Three fans built using our latest axial-tech design in a counter-rotating pattern to provide smooth and optimized airflow. More blades on each fan increases both the static pressure and the CFM of the airflow, all without unwanted increases in noise levels. Notched rings on the two outer fans and a solid ring on the center fan further handle turbulence and ensure that the air reaches the hottest parts of the heatsink constantly, for lower temperatures and higher performance. At idle, the fans go down into one 0 dB mode which minimizes system noise levels, while FanConnect II headers allow case fans to deliver extra fresh air just when it’s needed.

Ampere cards offer a great performance per watt improvement over their predecessors. To take full advantage of these improvements, they can absorb more energy overall. The huge ROG Strix heatsink and a carefully designed PCB allow it to support better performance with large amounts of raw electricity. Until three eight-pin PCI Express (PCIe) power connectors draw power directly from the power supply to reduce stress on the motherboard, and a high-resolution transient detection circuit monitors the power flow for dips that can adversely affect system stability. This sensitive circuit can save you hours of frustration for troubleshooting in case your power supply can’t keep up. 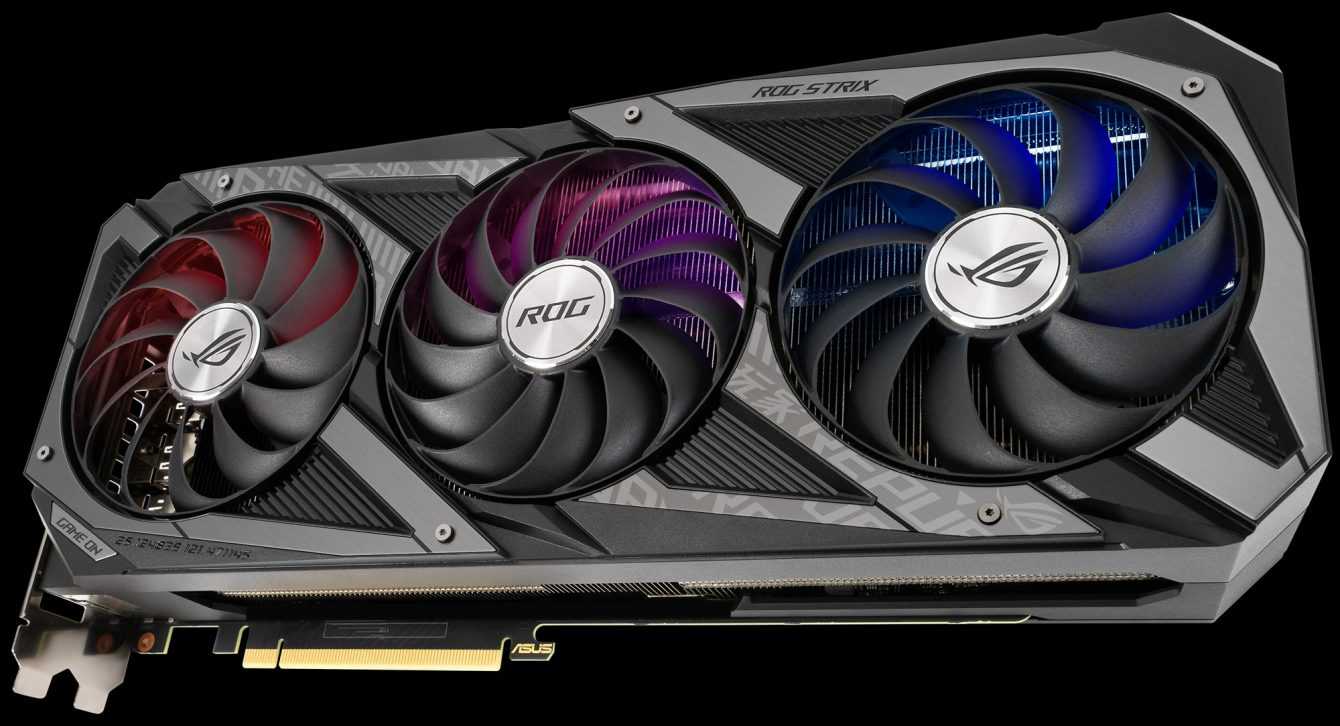 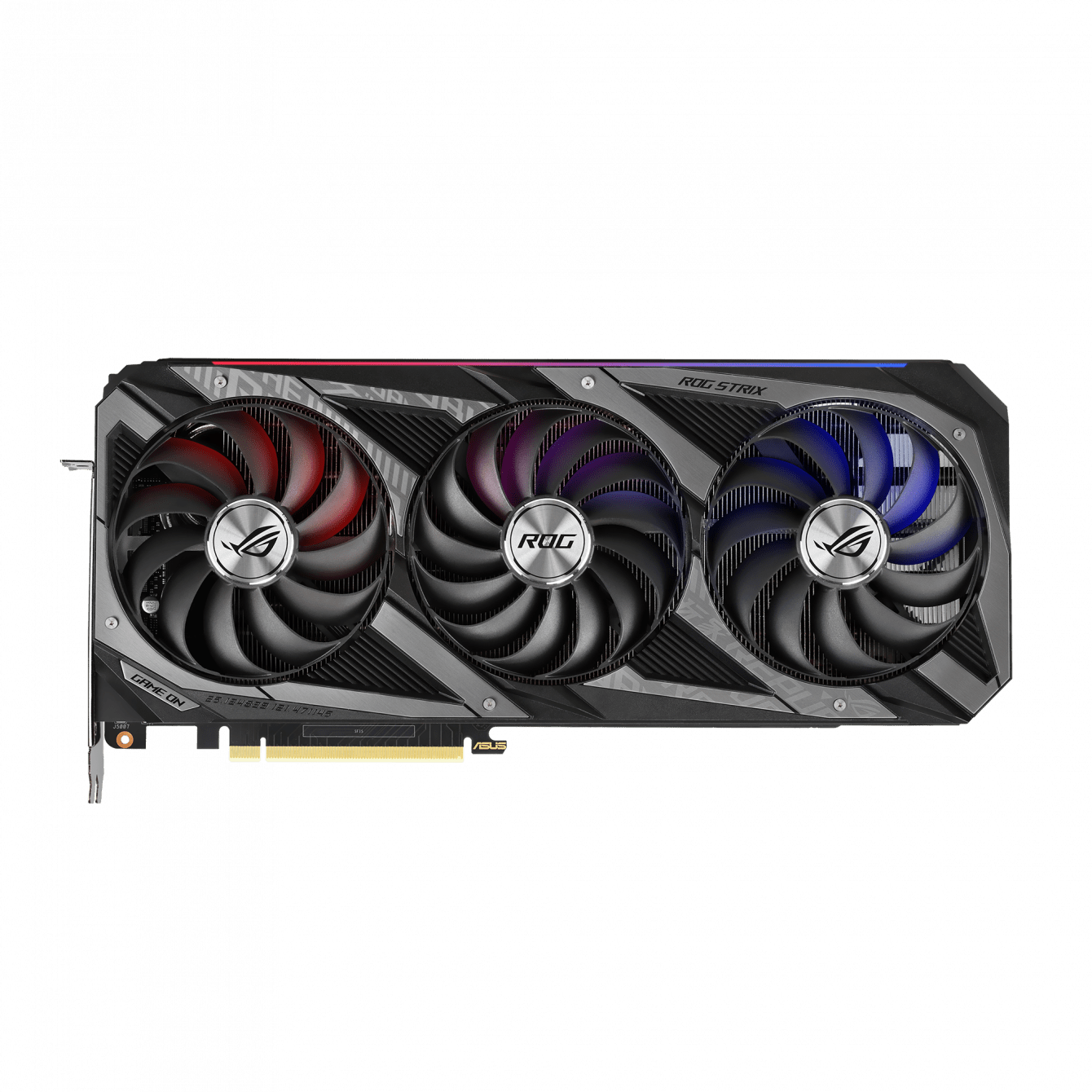 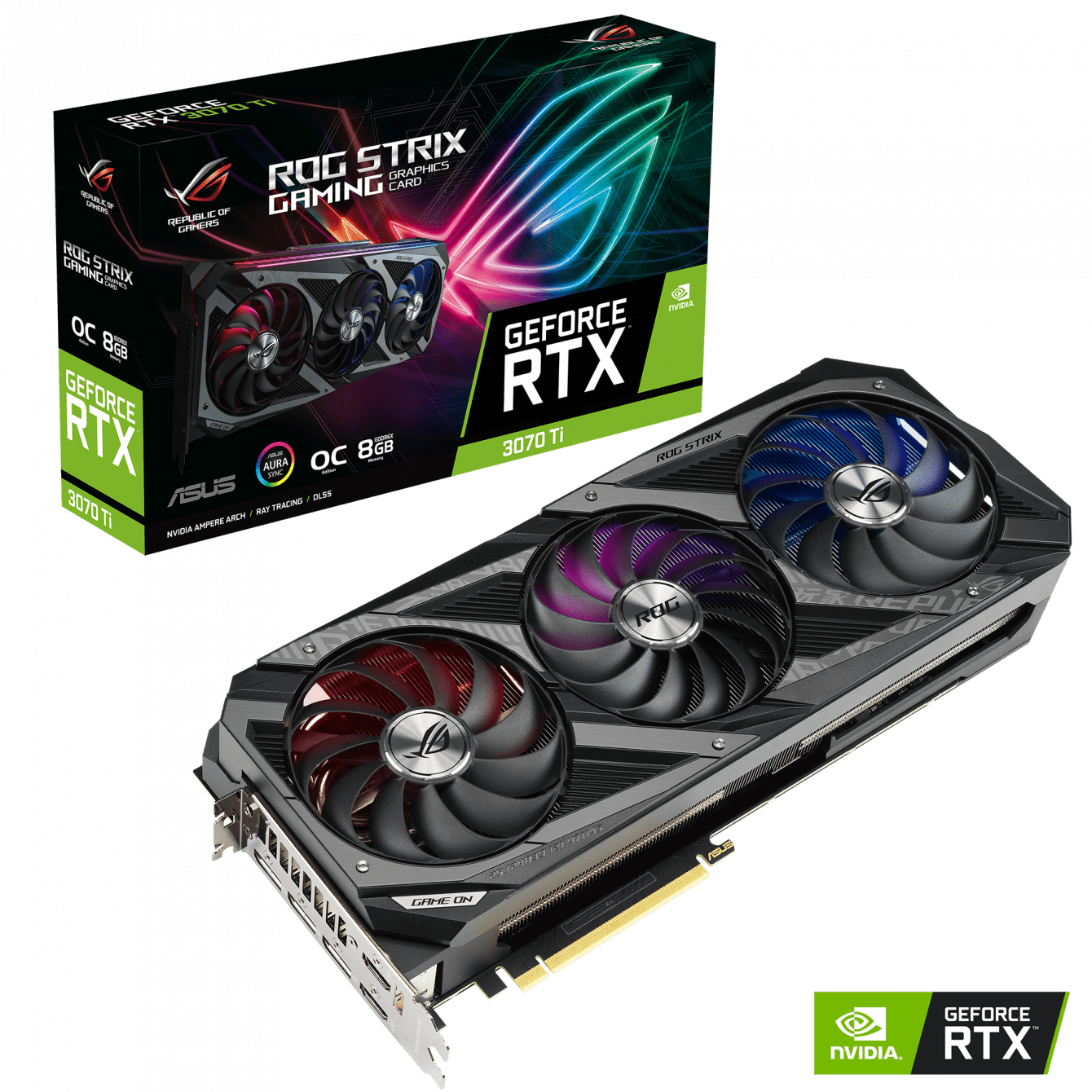 TUF Gaming GeForce RTX 3080 Ti and GeForce RTX 3070 Ti adopt one new ultra stealth aesthetic. A brushed aluminum cooling shell envelops a 2.7 slot heatsink cooled by a trio of fans built adopting the axial-tech design. Like the Strix cards, these TUF Gaming video cards can slow the fans to a minimum for quiet use. A single accent LED Aura RGB on the front of the card integrates with Aura Sync lighting schemes without attracting undue attention.

TUF Gaming video cards aren’t just tough on the outside. There Auto-Extreme assembly technology, used throughout our range, accurately positions and welds components without human intervention to augment reliability and build quality. Extra-rugged capacitors in the power subsystem are selected for long life under grueling conditions, plus a long line of 144-hour factory test ensures that every card is ready to go from the moment it is installed in a system. 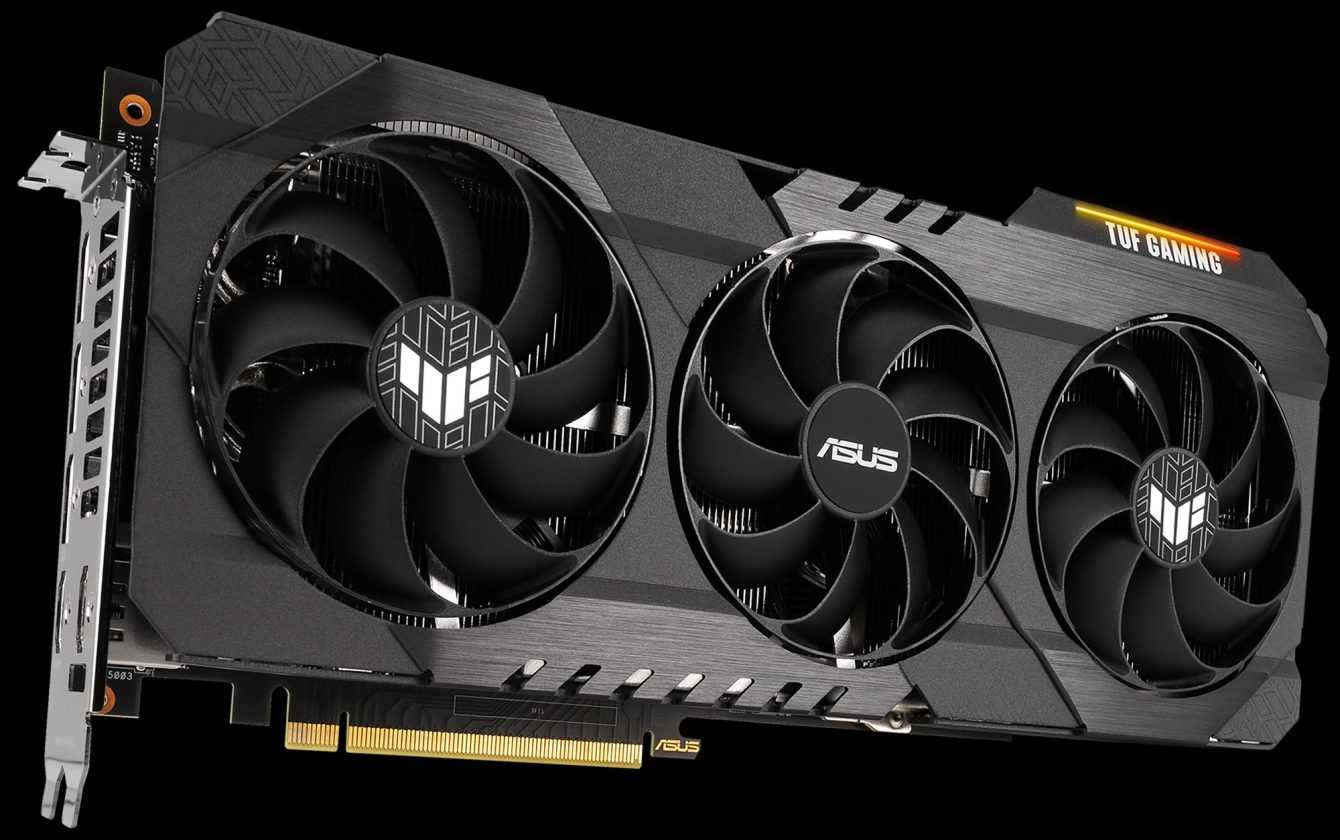 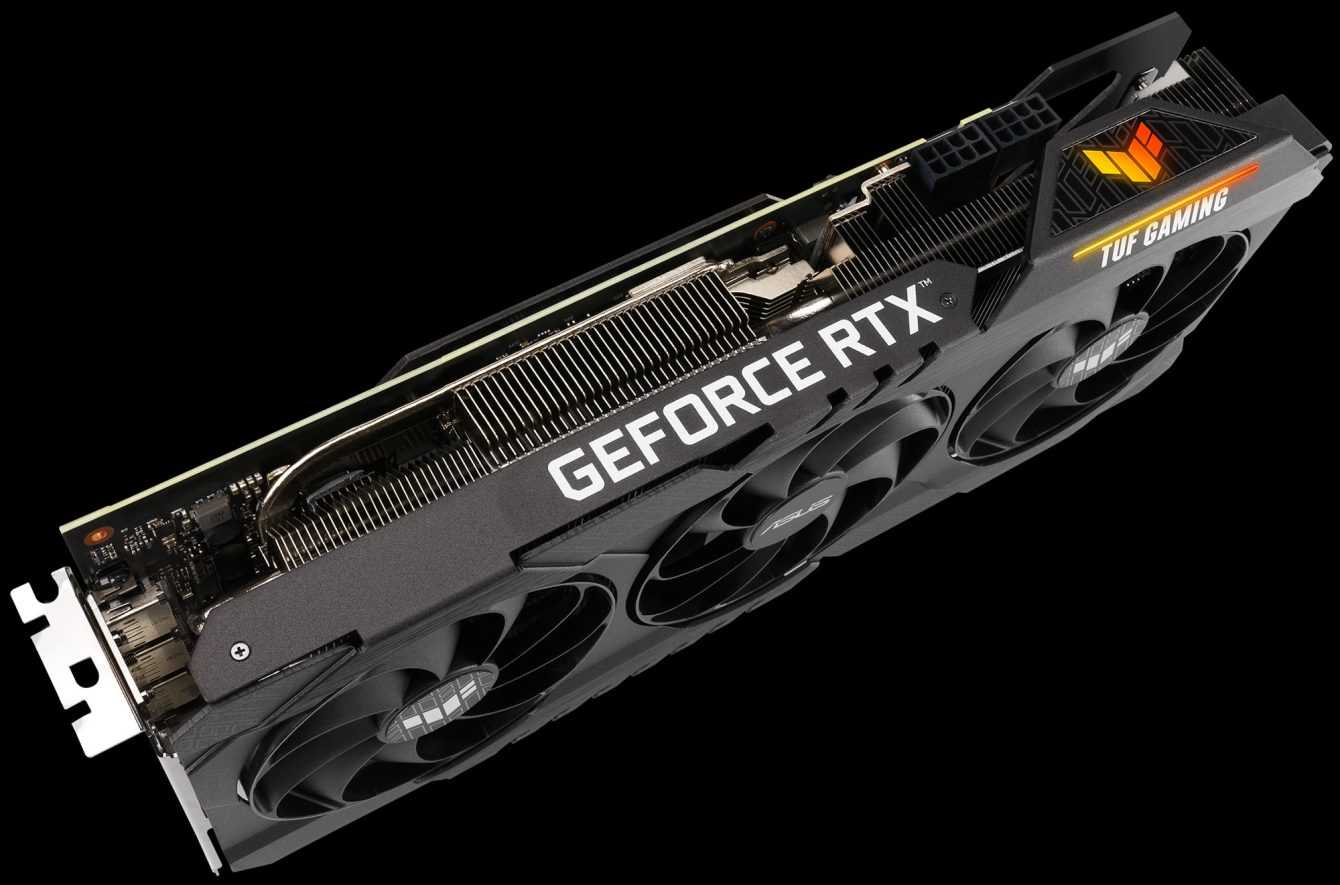 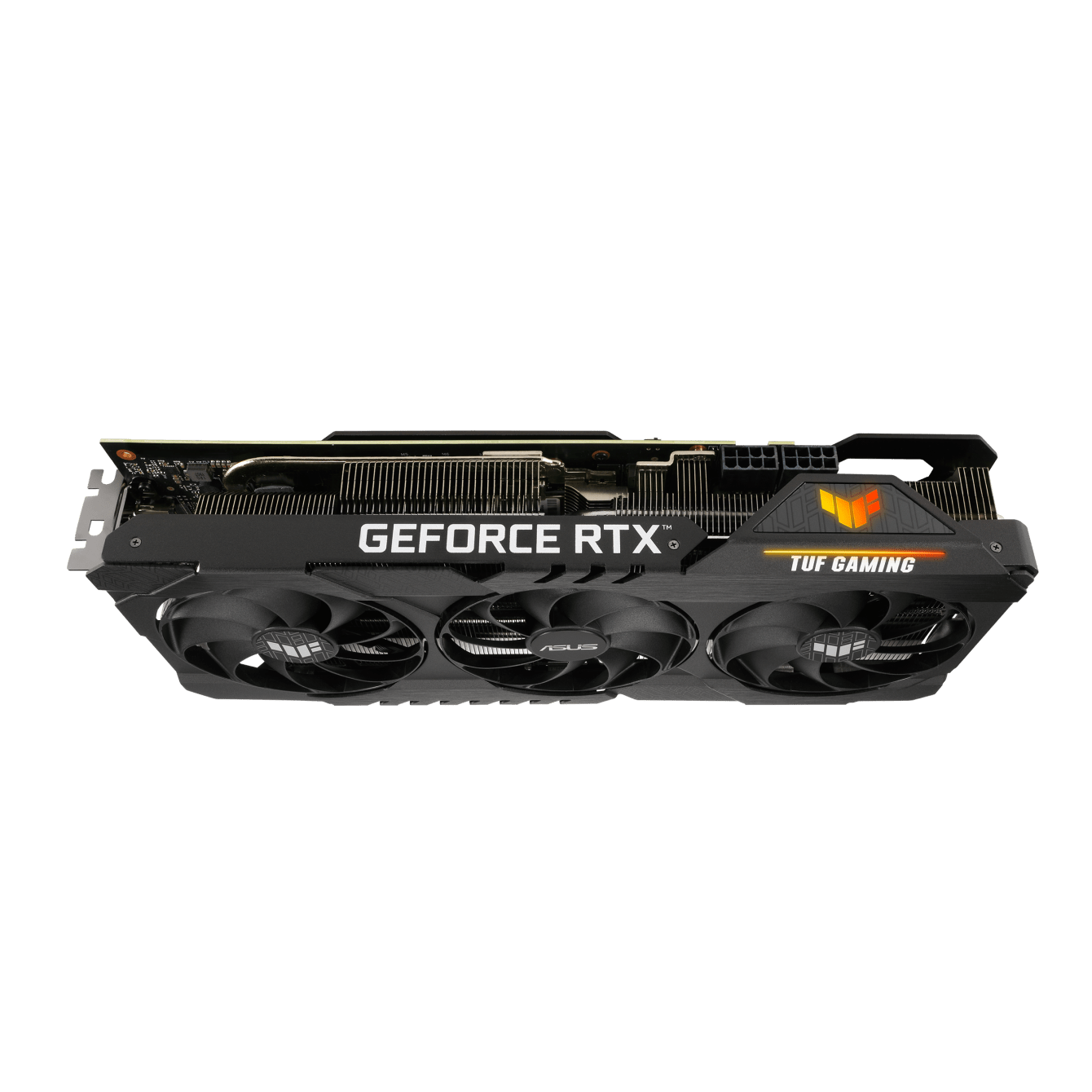 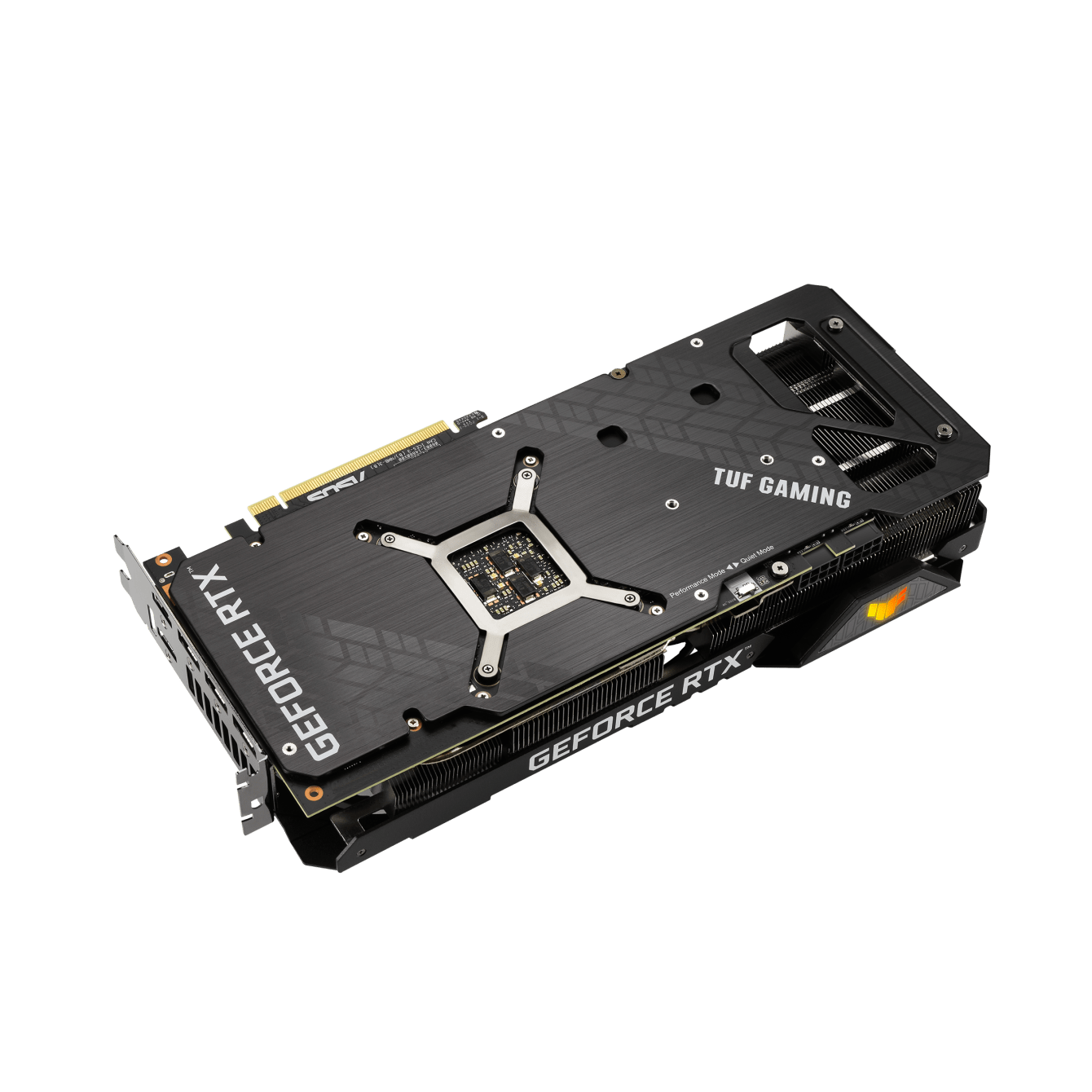 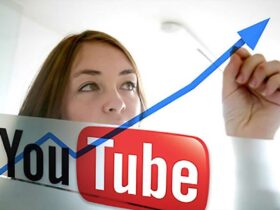 YouberUp review: how to grow your YouTube channel for free