In this review we will go to examine Back 4 Blood, getting to know the title under all the various aspects that characterize it

Back 4 Blood is the new title to come to the cooperative FPS market. Developed by the guys from Turtle Rock Studios, the video game immediately presents itself as the spiritual sequel to the Left 4 Dead series, however, going to stand out from the latter in many respects. It would be useless to deny the similarities between the titles, but it would also be very stupid to call it a mere copy and paste. So let’s start this one review and we find out Back 4 Blood in every respect.

As mentioned earlier, Back 4 Blood is cataloged in the cooperative FPS market and exploits what were the strengths of Left 4 Dead for increase its efficiency and give more spark to users. Also in this title we will find ourselves facing hordes upon hordes of enemies that will make our path more complicated. To these are then added some Infested “samples”, infested details that they have undergone mutations that make them more powerful and dangerous of the common ones.

In short, the base game is already known to most who have tried L4D over the years and, in some ways, it might seem familiar. Woe to underestimate this title though! Back 4 Blood will indeed be similar, but it is not the same as those that preceded it. Taking this video game lightly could be counterproductive as, although the base is that, the gameplay will put you in serious trouble every time you make a choice. 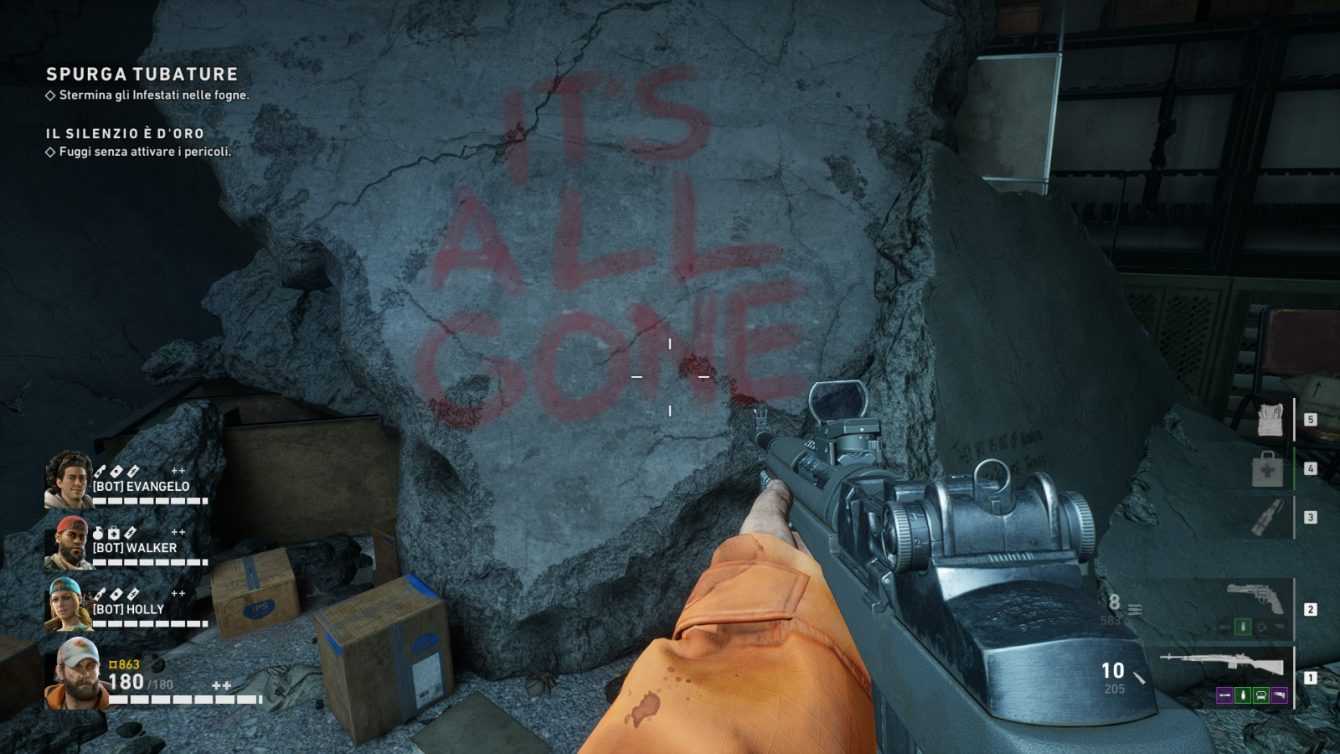 Cards and Approaches Make a Difference – Back 4 Blood Review

During each round we will find ourselves in a team of four Exterminators ready to face various tasks to survive in the world that sees them as protagonists. These Exterminators, although only 4 can be used during the missions, are eight, each with characteristics and abilities that distinguish them from the others. They are: Walker, Holly, Evangelo, Ma ‘, Hoffman, Doc, Karlee and Jim.

A first important difference therefore derives from the number of operators that we can use during our adventure, but it is not the only one. In fact, each round will be different each time we play it. Replaying a particular mission will in fact allow us to live different experiences, even if you don’t change difficulty. This is due to the new card system that was introduced by the developers, but also by a Infested random spawn factor and related “samples”.

We will therefore be able to live a different experience every time we play, thus avoiding that sense of repetitiveness that had characterized Valve’s titles. Let’s see how the new card system works. 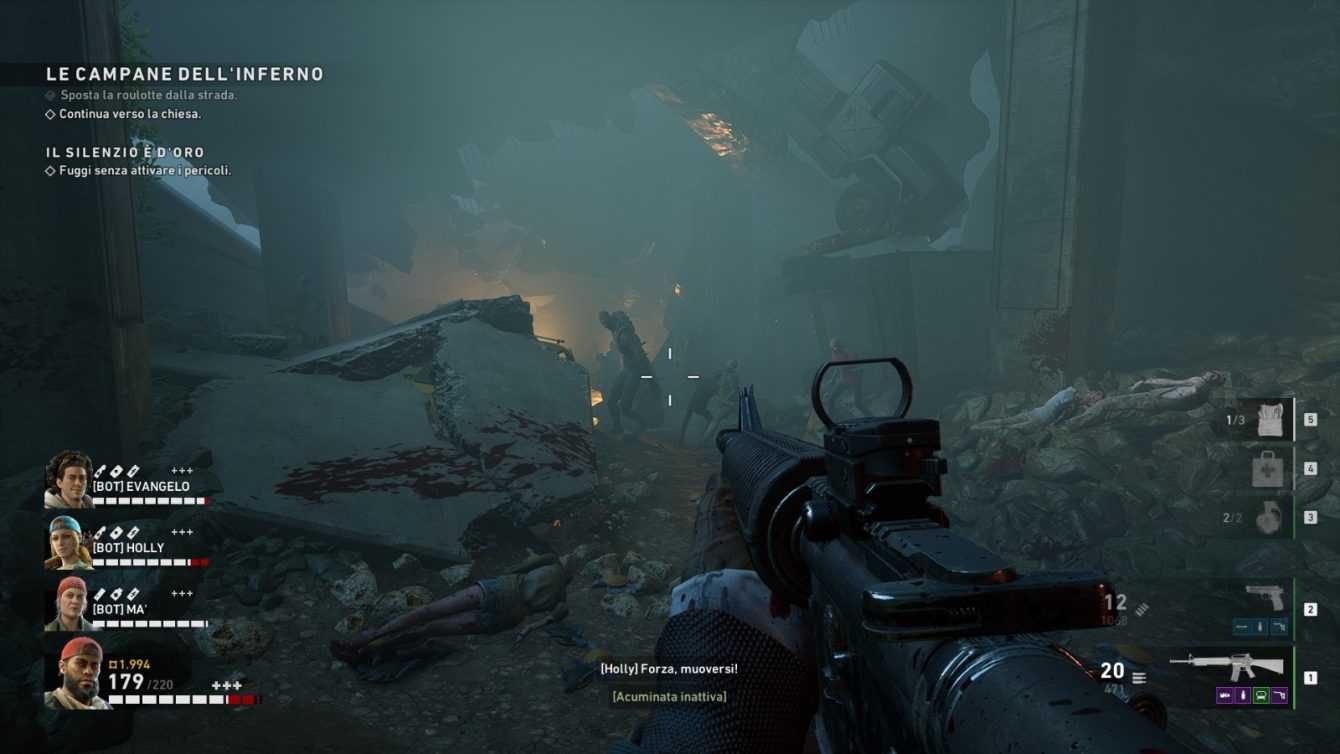 The cards are one fundamental tool to continue on our path. These are divided into two broad categories: Corruption Cards e Player Cards. The former are selected at the beginning of each round from Game Director and serve for make our advance more difficult. These can include unexpected events that affect visibility, such as fog or lack of light, or make the Infested stronger and more resilient.

The Player Cards, on the other hand, will have the role of “countering” those Corruption. In the game and what sono i 152, in turn divided into four sub-categories: Reflexes, Discipline, Strength e Fortuna. Each card will guarantee a not indifferent buff, but sometimes also important nerfs. At the beginning of the campaign, be it from an advanced point or directly from the beginning of the chapter, each player will be able to select a deck depending on your needs. Each deck will consist of 15 cards which will be fished according to the previously selected order.

At the beginning of the adventure, however, we will not have many cards. These in fact must be unlocked in the course of our adventure, both by finding them scattered here and there in the maps, and through the Supply Points, cumulative in the modalities Countryside (only in the multiplayer version) e Swarm. So here we come to another key point of this Back 4 Blood review. 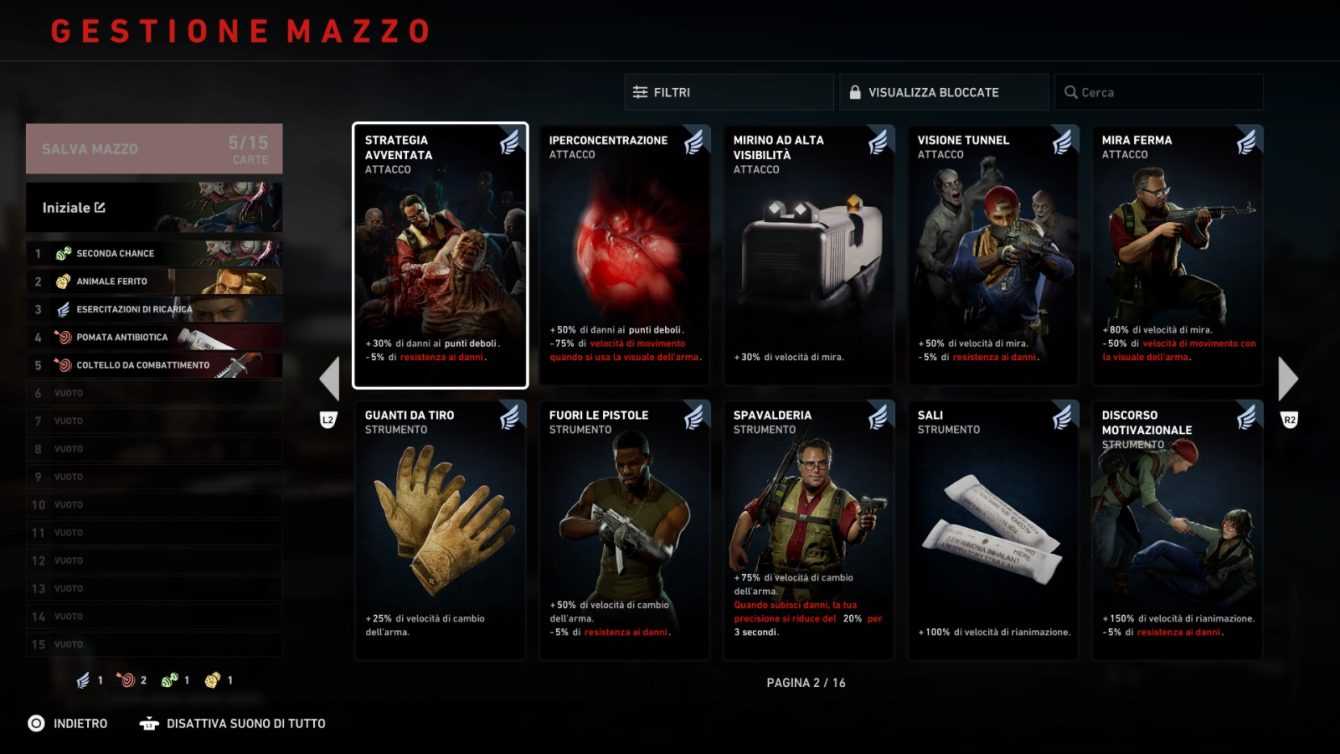 Different modes for different styles of play – Back 4 Blood Review

The title is designed to be played in three modes. Two are very similar PvEs, differentiated only by the choice of playing in single player or multiplayer, while the third is a PvP divided into several rounds. To be precise, we are talking about the modalities respectively Single Player Campaign, Countryside – the cooperative mode to be clear – e Swarm. Although there is therefore a mode for the single player, the developers have encouraged multiplayer thanks to some measures.

The main choice was that of activate cross-play between the various gaming platforms, thus allowing you to play with your friends regardless of whether you have a PC, a PlayStation or an Xbox. The “penalty” that afflicts the single mode also further strengthens the direction taken. With this solution in fact it will not be possible to obtain Supply Points. It will therefore be impossible to unlock new cards, unless you find them during the adventure, which is not exactly simple. 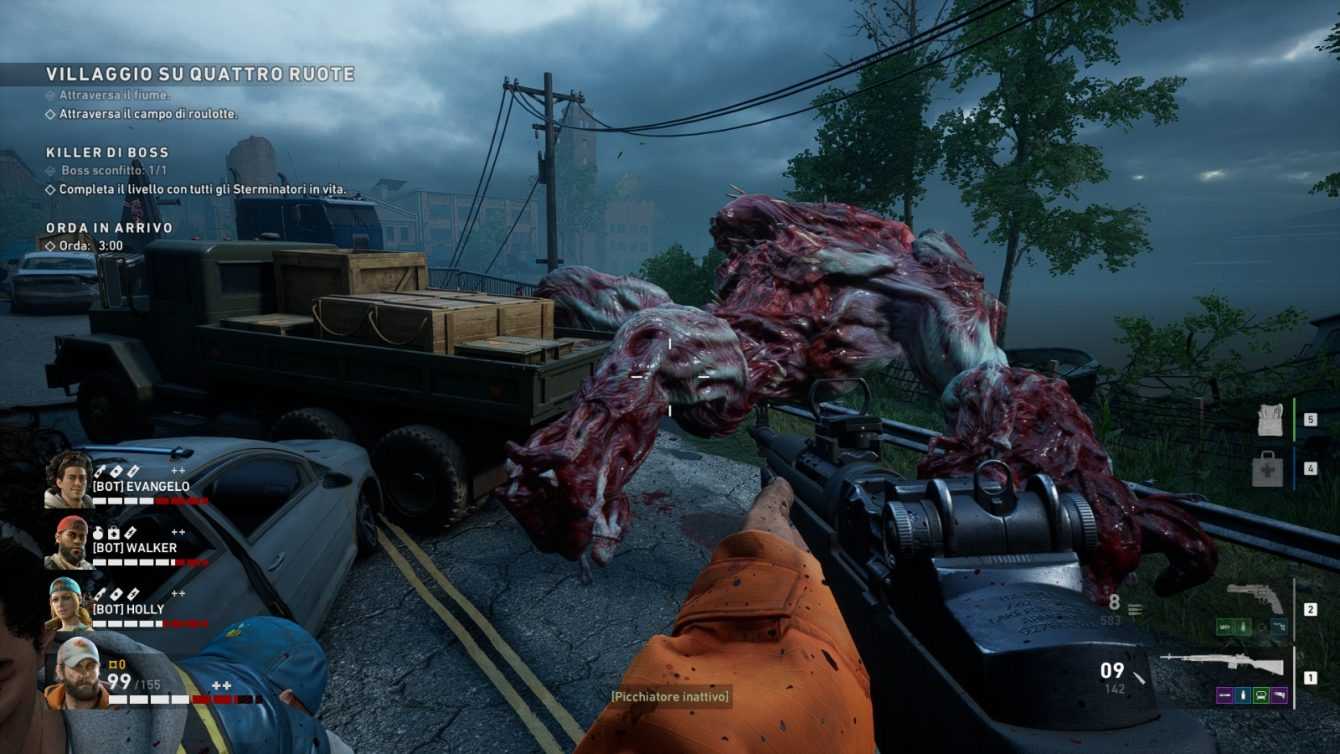 The PvE – Back 4 Blood Review

The campaign itself appears to be well structured. The gloomy setting reflects that of a post-apocalyptic world where mankind has almost entirely been subjected to the virus that has struck the Infested. Immersing ourselves in the game thanks to this cure will not be difficult. The game is also well taken care of from the gameplay point of view, with a very good shooting system and waves of enemies ready to keep us busy at any moment.

However in some cases and in some rather open maps, although there are various enemies ready to await us, the latter can be attracted little by little. We will then find ourselves on hills, marshes and mountain passes richly populated, but somewhat poor at the same time. Walking and reaching the other side will turn out, in some moments, really boring. Playing solo then they see each other all the limits of AI which, although not exactly poor, still has some shortcomings.

For example, we will end up with two bots who will heal us at the same time despite their life being much shorter than ours. In some cases they will then start firing on opponents who will draw the horde back to us, causing us to lose a bonus objective. Despite these small inaccuracies, however we can enjoy a good overall experience which will allow us to have hours and hours of fun.

The system is also very good “Attempts”. Thanks to the latter it will be possible repeat a level for a certain number of attempts, at the end of which we will have to restart a new game to move forward. However, this system can be counterproductive when we play with people we don’t know, making our journey a real odyssey. 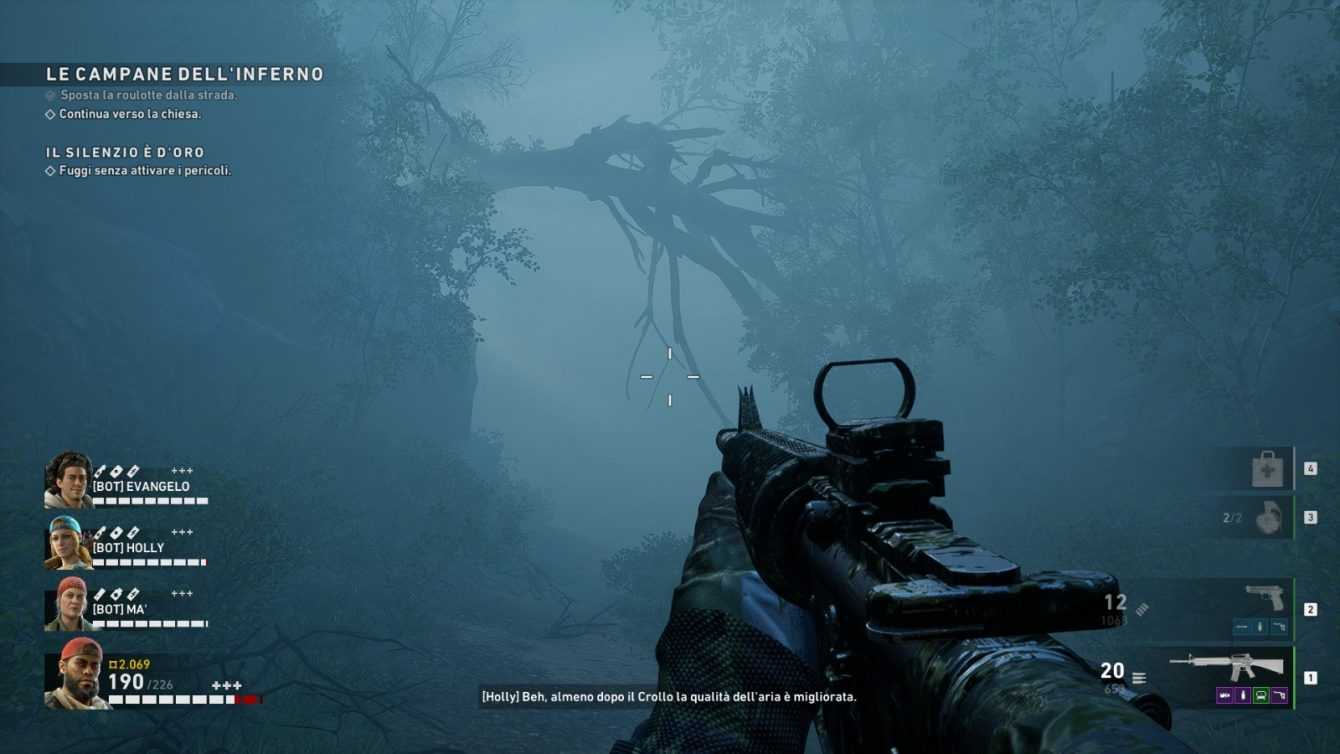 A very different speech in this review on Back 4 Blood must be done instead for the PvP. These matches are more structured round at 4 vs 4 where each team will take turns taking on the role of the Haunted or the Exterminators. The player who survives the longest wins the round to the various waves of Infested led by the four opposing players. At the beginning of the round there will be the selection of the character and the upgrade if you are part of the Infested, while equipment if you are the Exterminators.

Each turn ends when the Exterminators are all killed. To reach this goal, if you are an Infested, you will have to knock down all the opponents at the same time or eliminate them one at a time. Furthermore, an exterminator cannot be revived more than once per turn by his companions. This allows for faster matches. Swarm is therefore a mode that relies heavily on team play and also on planning an optimal strategy. 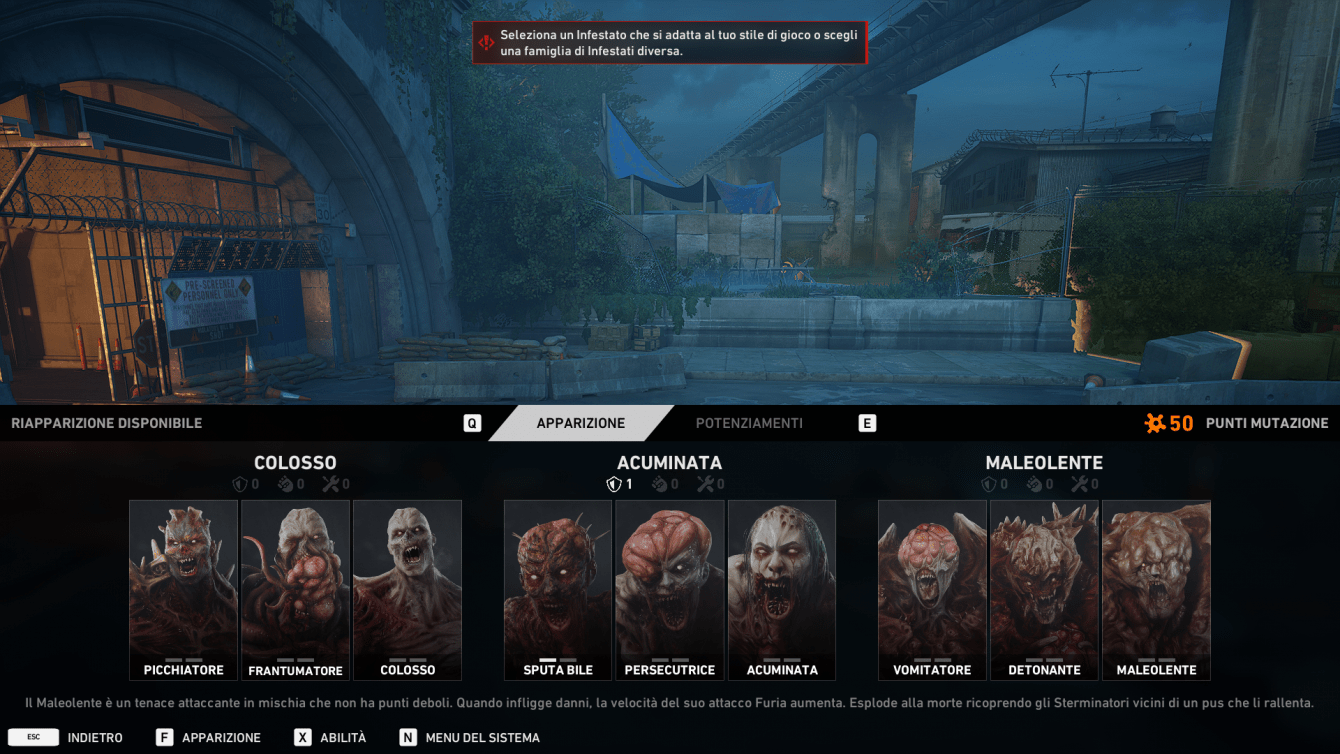 Weapons at will – Back 4 Blood review

Although the cards are very important during the course of the adventure or in the PvP mode, the weapons also play a fundamental role. There are 32 in the game, divided between ranged weapons and melee weapons. Each can be customized at will through the addition of viewfinders, magazines, pointers and so on that can be purchased in the shelter at the start of the game or found while we walk the map.

To the real weapons are added then very useful accessories that can turn the situation around. Among these are: attachment accessories, such as grenades or Molotov cocktails, very useful for taking down countless enemies or for causing a lot of damage to the most resistant ones, support accessories as bandages and medkits e usable accessories like the defibrillator or the ammo box. In addition to a complete arsenal, it will therefore be possible to enjoy these supports that will allow us to escape from rather unfortunate situations. A great variety that will allow us to use the style we prefer most. 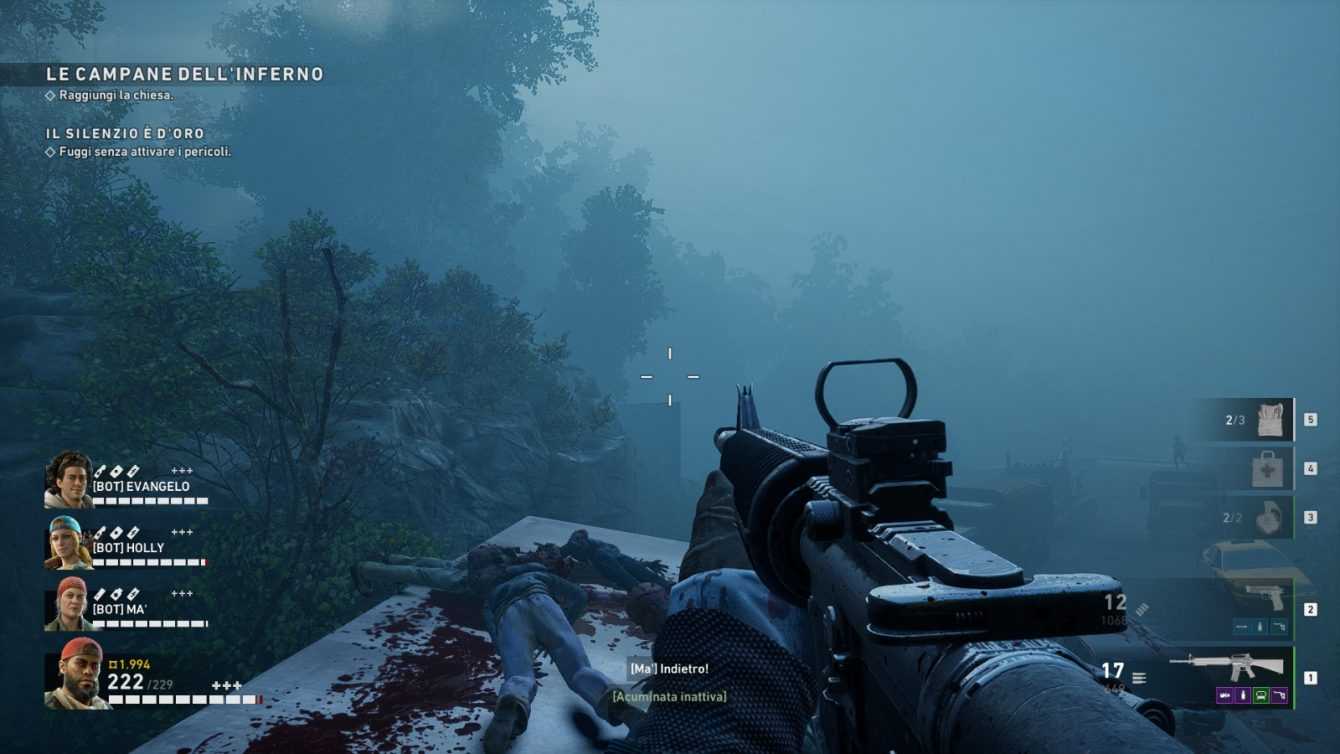 We have now reached the end of this review on Back 4 Blood and it is time to draw some conclusions. The game itself turns out to be well structured, with very convincing settings that manage to immerse the player more and more in the gameplay. Very important is also the variety of weapons and equipment that allow the player to choose his own style without particular constraints that affect the general experience.

Although it can be considered the successor to Left 4 Dead, from the latter it departs in a distinct way. The starting point is not discussed, but the introduction of the cards in the first place is one of the markers that marks the handover between the game of Valve and that of Turtle Rock Studios. The choice of the deck will be very important to make us progress and reach our goal without having to start over.

The system of attempts introduced is also good, even if it is counterproductive when we play with unknown people. A simplified ping system which will allow us to mark enemies, ammunition, weapons or very specific places thanks to the use of a single button. In short, a well-structured and mature title, although in some ways it has been castrated by the choices of the developers, as happens in the single player campaign.

That’s all for this Back 4 Blood review. We remind you that the game is disponibile su PC, PlayStation 4, PlayStation 5, Xbox One e Xbox Series X|S at the recommended price of € 69.99 for the console version, while 59.99 for that PC. Find this latest version slightly discounted on Instant Gaming. In order not to miss further reviews and news from the videogame universe, keep following the pages of techgameworld.com!

Good in both solo and co-op