In this review we will analyze in detail all the features of Base One, a peculiar space simulator published by Blowfish Studios

With the use of the expression “space simulator” one can easily be misled: most players, hearing these words, will probably think first of Star Citizen or No Man’s Sky, or those titles in which they control themselves spacecraft like Elite Dangerous. When we talk about the last effort developed by Pixfroze and published by Blowfish Studios per PC, the simulation element is attributable to the management of a space station that players will be required to administer, develop and defend.

What makes Base One even more distinctive is the clear footprint hardcore survival that has been given to the title: the scarcity of resources and the survival of one’s crew are just two of the elements that you will have to pay attention to in order to survive in the recesses of deep space. Having said that then, we can begin, through this review, to analyze this in detail Base One, so as to see if it is right for you.

The Wormhole threatens the survival of mankind

A gigantic space-time conduit it appeared close to the Moon, and its powerful gravitational pull is slowly corroding and sucking it up, causing cataclysms and natural disasters of proportions never before seen on Earth. Since the latter is now uninhabitable, the Earth Global Union has devised a plan for the survival of mankind: a space exploration plan, to cross this wormhole and find a new habitable home.

As you may have guessed, the first element we will talk about in this Base One review is the narrative context. The game in fact is characterized by a Campaign mode, in which we will have to carry out various missions from time to time that will allow us to proceed to the end. The narrative pretext, also aided by the initial cutscene, is very interesting: although the plot develops in a not exactly excellent way, it allows the player to have an extra motivation to proceed in the campaign. 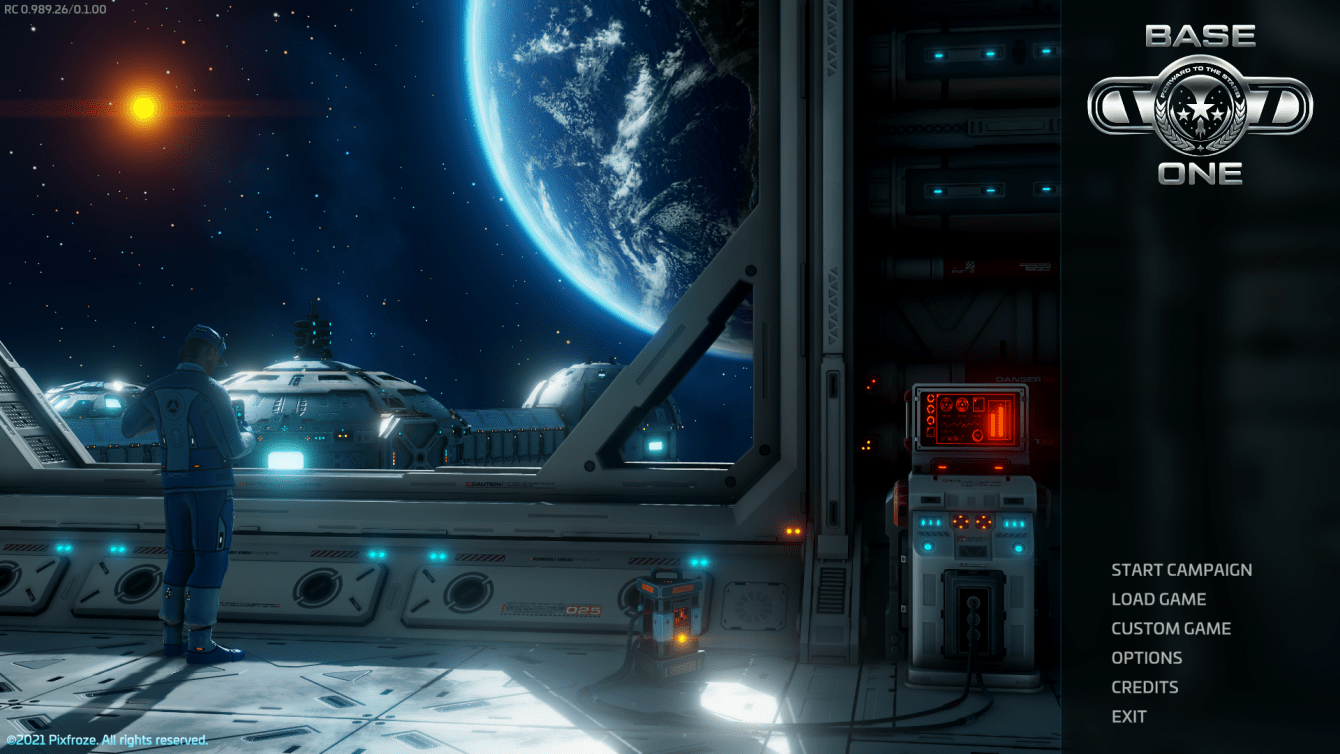 All Game Modes – Base One Review

As mentioned before, the narrative context offers a valid motivation to continue the Campaign, also because the rhythm of the missions it will probably have the opposite effect. In the various levels of this mode, in fact, you will be assigned specific objectives from time to time, and you will not be able to do anything else. This not only means that the more curious will not have the opportunity to independently explore the features of this game, but also that, given the execution times of the various tasks by your crew, very often you will find yourself having to wait for several minutes, waiting for all the orders given to be carried out one by one.

Not all evil comes to harm: for the less experienced of the genre of real-time strategists, this kind of prolonged tutorial will allow them to better understand all the features that characterize Base One, provided they have a very slow general pace, even at increased speed.

The other game mode, Custom, is a completely different story. In the absence of those rigid stakes imposed by history and missions, you finally have the opportunity to create your own space station freely. By starting a new game, we will first have the ability to customize the starting conditions, based on how difficult and punishing we want it to be. In this mode, you can also see the importance of the element very well survival: every single choice not adequately considered could lead to many problems, which will make it more difficult for the crew to survive in the station. 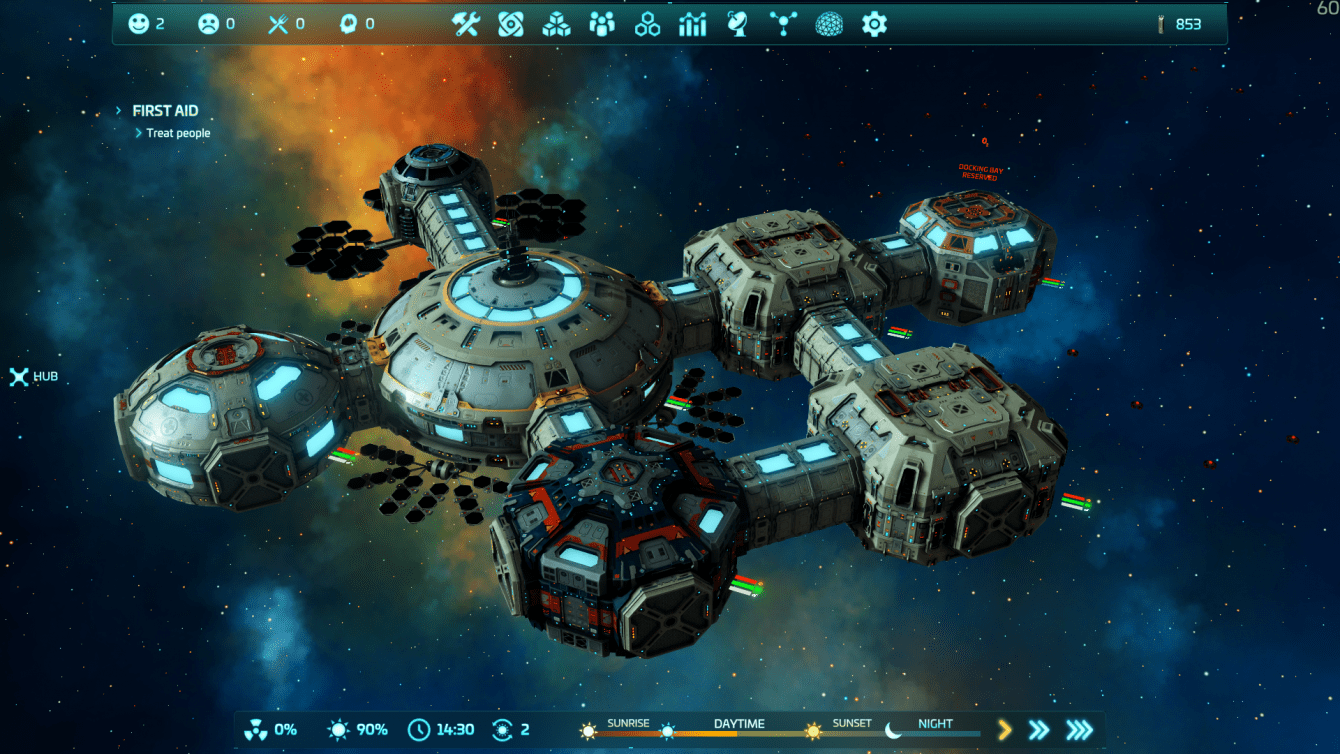 Build & Connect – Base One Review

Once the game has started, you will notice that at the beginning we will be provided a single module and a crew of three initial members (along with all the resources we decided to start with). Starting from this alone, we will have to start expanding the base. The menu of buildings it will therefore allow you to build new modules and all the devices necessary to make the station livable.

Regarding the latter, it is also necessary to mention the peculiar connection system: each device, from the battery that receives energy to the life support unit that supplies oxygen and heating to the modules, must be adequately connected, so as to allow its proper operation. Continuing in this Base One review, we will see to explore in more detail how the gameplay translates. 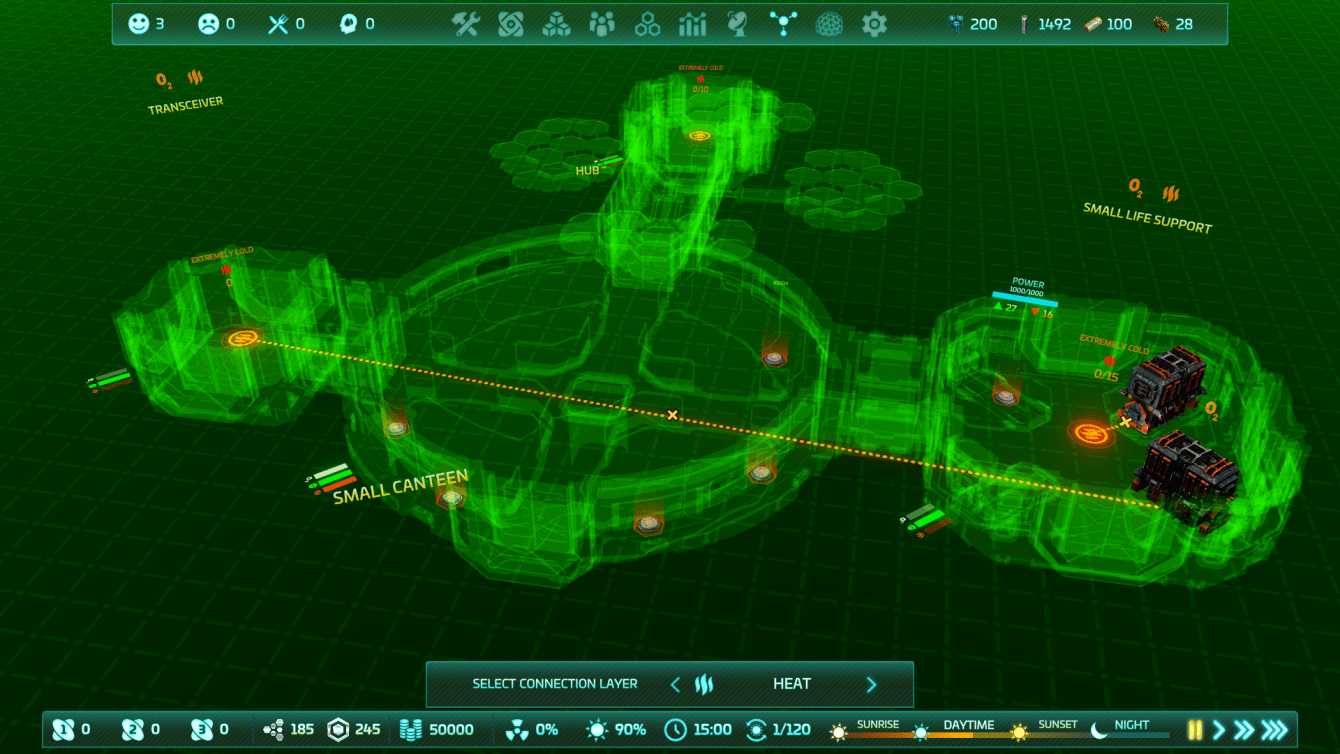 Contacts with the outside – Basic One Review

Clearly the constructions you will have starting are not the only ones: once the Laboratory, you will have the opportunity to start research, which will unlock access to new modules and new devices, to provide for the survival and well-being of the crew (it is also essential to know how to manage the health and morale of your crew). The research tree is very large and has a lot of different branches: you will be able to research technologies to improve the quality of life, to develop defensive systems against the fearsome attacks of asteroids and aliens, to increase the efficiency of the station and much more.

The advice at the beginning therefore is to stop and look, at least in broad terms, all the branches, so that you can better choose which path to take. To begin research, however, you will first need to get a scientist in your crew, which you can only hire after building a Transceiver. 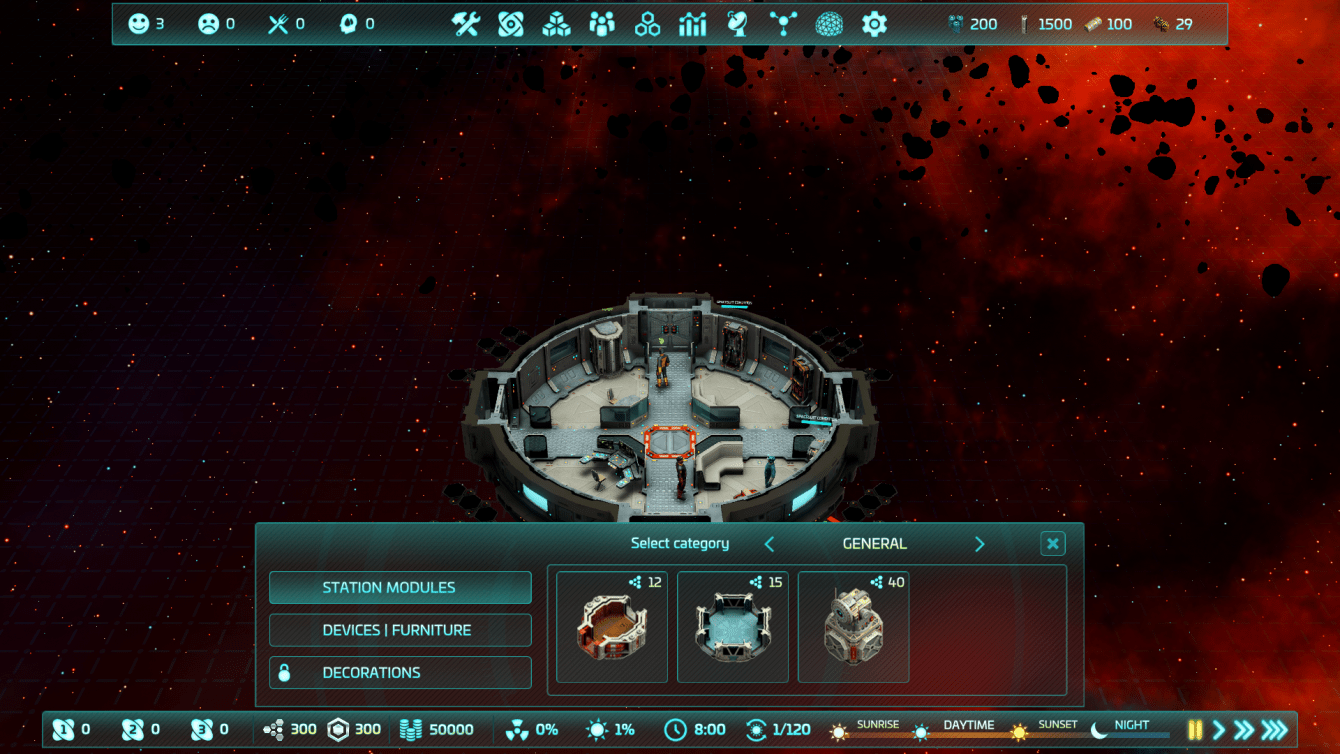 By building a Transceiver, in fact, you will unlock two new functions: with the first, you will finally be able to access the Shop, through which you can buy supplies of all kinds (such as, for example, food, water and oxygen) and also hire new members. Members can have various specializations: there are i technicians who are your starting staff, but also scientists, engineers, doctors and even garbage collectors (which will have the role of keeping your station clean, when in the late stages of the game you begin to accumulate garbage). In short, there are many different “classes”, and each of them is important.

The second unlocked function is the ability to communicate with your managers: they will provide you with special missions which, if completed, will give in exchange for Loyalty Points. Still talking with them, you will have the opportunity to exchange these points for various rewards: you can ask for additional credits, discounts for the shop, but also bonuses of various kinds. 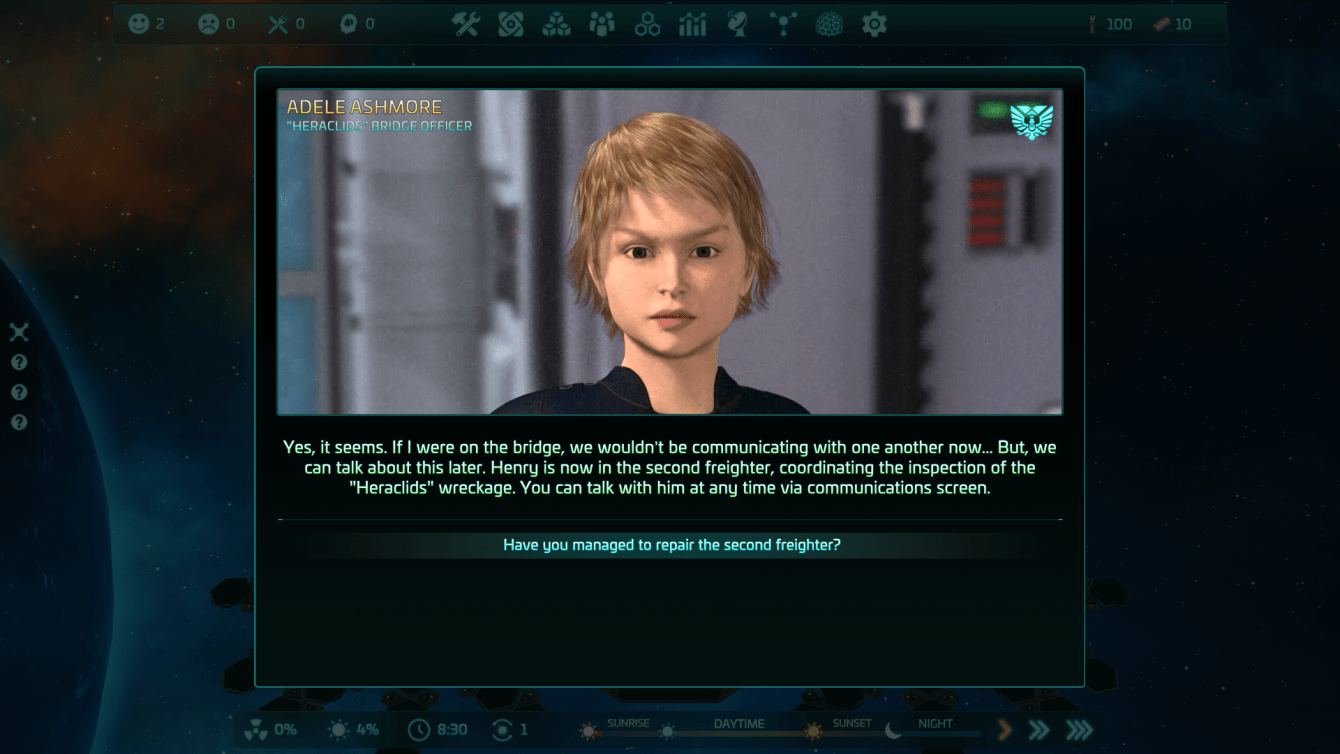 From a point of view technical the game looks good: the graphic impact, both in the models and in the interface, is essential but pleasant (except for the character models when you see them in the foreground), and, net of some sudden freeze and some glitch encountered from time to time, no malfunctions were found that ruined the experience. In general, as you may have guessed from the review, the strategic experience offered by Base One manages to maintain the set objectives: the difficulty generally calibrated on the high makes the survival hardcore element well, and in general the gameplay is almost never too banal or repetitive.

This is especially true for the Custom mode: when instead you switch to the Campaign (which, at least in theory, would be the main mode), you are faced with a game excessively limited, which loses its essence in an attempt to guide the player through too long a tutorial. Considering also the intention to insert a narrative context that to arouse the interest of the players, we can say that it is really a shame.

What was your experience with Base One instead? Write in the comments and, in the meantime, we invite you to stay tuned on the pages of TechGameWorld.com for more reviews, guides and news on the most important video games of the moment. If you prefer to buy game keys at discounted prices, you can do so through our link to Instant Gaming.