In this review we will get to know the Mako M1 gaming mouse by Black Shark, the 2 in 1 designed for all gamers

Do you still remember the old ball mice? Playing at the time wasn’t easy, especially if the rollers got dirty and didn’t allow the mouse to slide smoothly. Today with the advancement of technology things have changed and we are left with myriads of peripherals of all kinds. Everything is designed to meet the various styles of play of each user. Whether you prefer a wired or wireless mouse, one with a lot of DPI or one with a lot of programmable buttons, you will find the one that’s right for you.

Every company tries to ask itself how could the ideal mouse be. Also Black Shark it has moved in this direction, creating its own Mako M1 that we will analyze in this review. It looks like a gaming mouse that it can be used both wirelessly and wired; but how did he behave in our hands? You just have to find out by continuing to read our article. 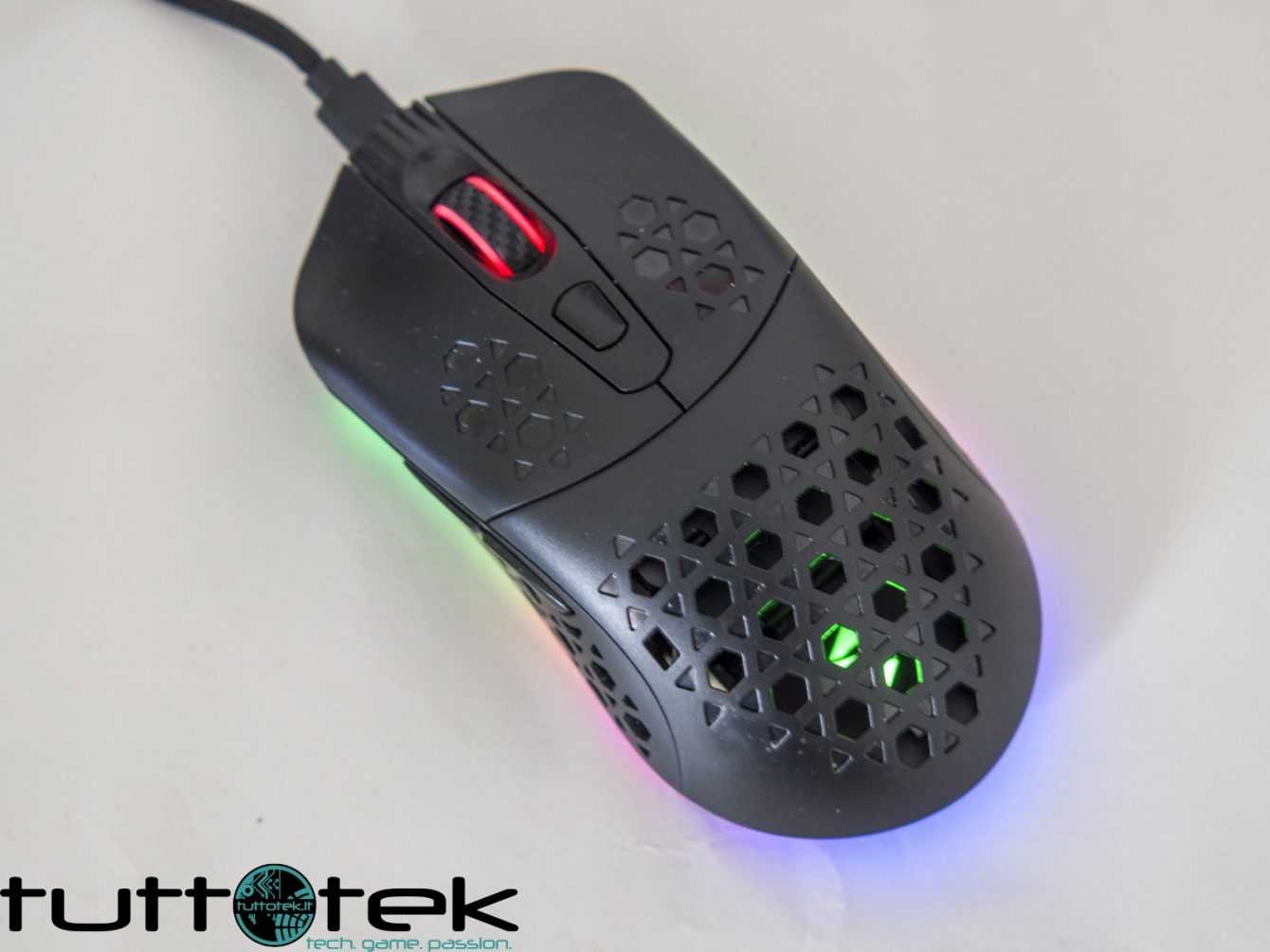 The mouse comes in one very minimal black telescopic package. In fact, this will not present much information, other than the image of the product, the name of the model and that of the company. Once open we will meet again a small manual for use of the device and a small thank you card. Below these the space will be divided into three compartments hollowed out in the ABS to avoid accidental bumps.

The largest compartment is dedicated to the mouse itself. Above the device we find the alveolar shell, which replaces the default one, and below it the rechargeable battery to be inserted inside the mouse. Next to it we find another box with the inside nylon cable e l’adattatore wireless USB. The device shows a quite elegant and slender desing which could make it great for both right-handed and left-handed people if it weren’t for the side buttons located only on the left side.

Both on the sides of the mouse and on the keys the beehive motif that we find on the second body is recalled and that in a certain sense forces us to change the latter. In addition to an aesthetic point of view, the change also serves to lighten the mouse, but we will deal with this later. In contact with the mat, but always remaining on the side profile, we find a long one RGB strip that runs almost the entire perimeter. The other lighting areas are the wheel, also RGB, and the logo with a solid green light on the top of the mouse. 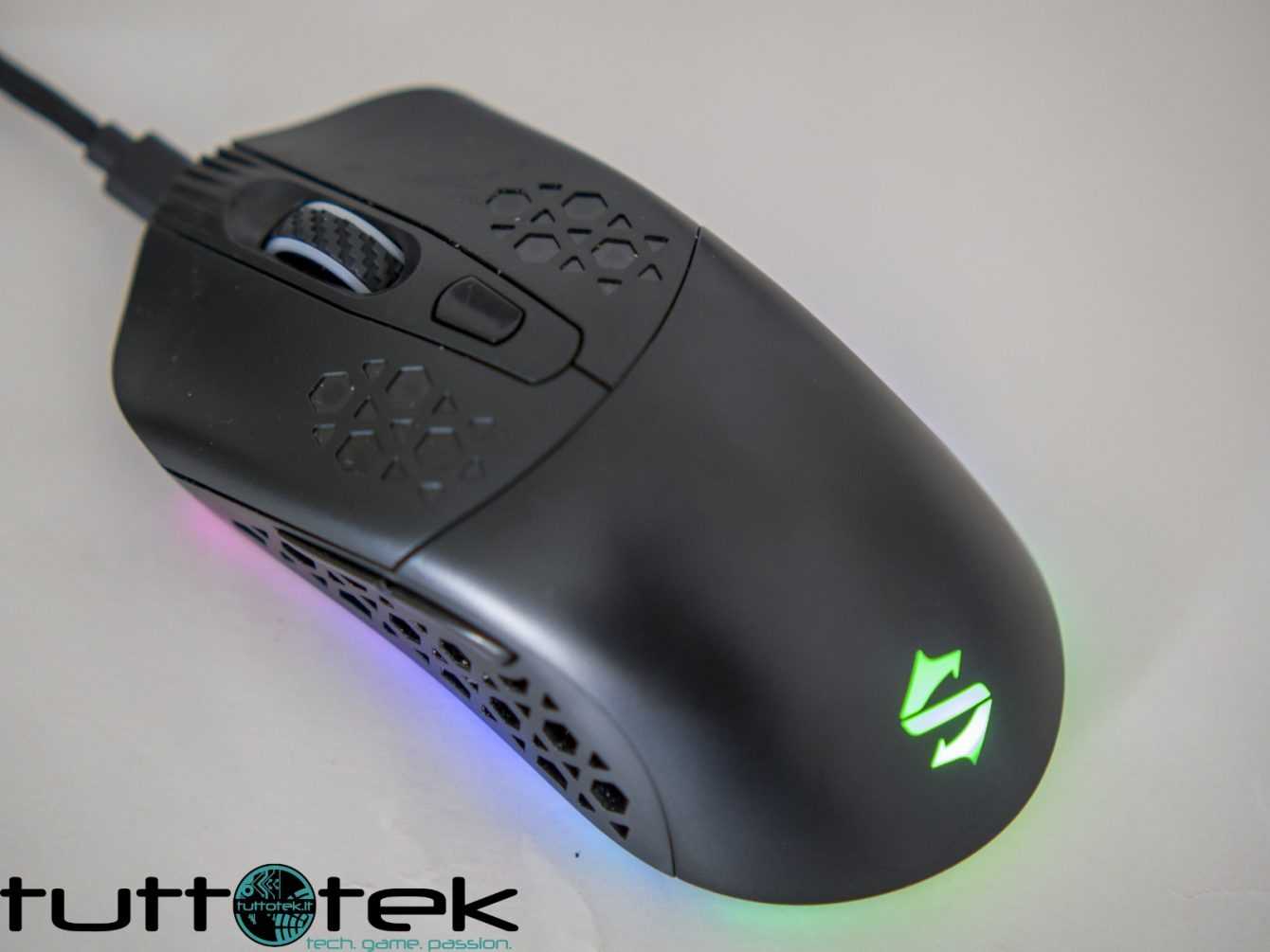 As we have seen from the data sheet, the weight of this device can vary by as much as 15 grams, depending on the desired use. If our goal is to use the mouse with the default shell and wirelessly, obviously the weight will be higher. If, on the other hand, we decide to use the device in wired mode, therefore without battery, and with the beehive body, then the weight will be minimal.

Choose to play in one or the other mode then it is not a choice that is purely about “comfort” (with or without cable), but also the total mass to be moved. A lighter mouse will in fact less strain our wrist, or the arm in general, in long sessions. It goes without saying that we will have to understand if we prefer give up a few grams in order not to have the bulk of the cable or viceversa.

These elements aren’t the only changes you can make to the mouse. In fact it will be possible set the various lighting effects of the RGB strip or change the key configuration, choosing macros to execute or simply another function instead of the preset one. So let’s go and see one of the key topics of this review on the Black Shark Mako M1 mouse, the software. 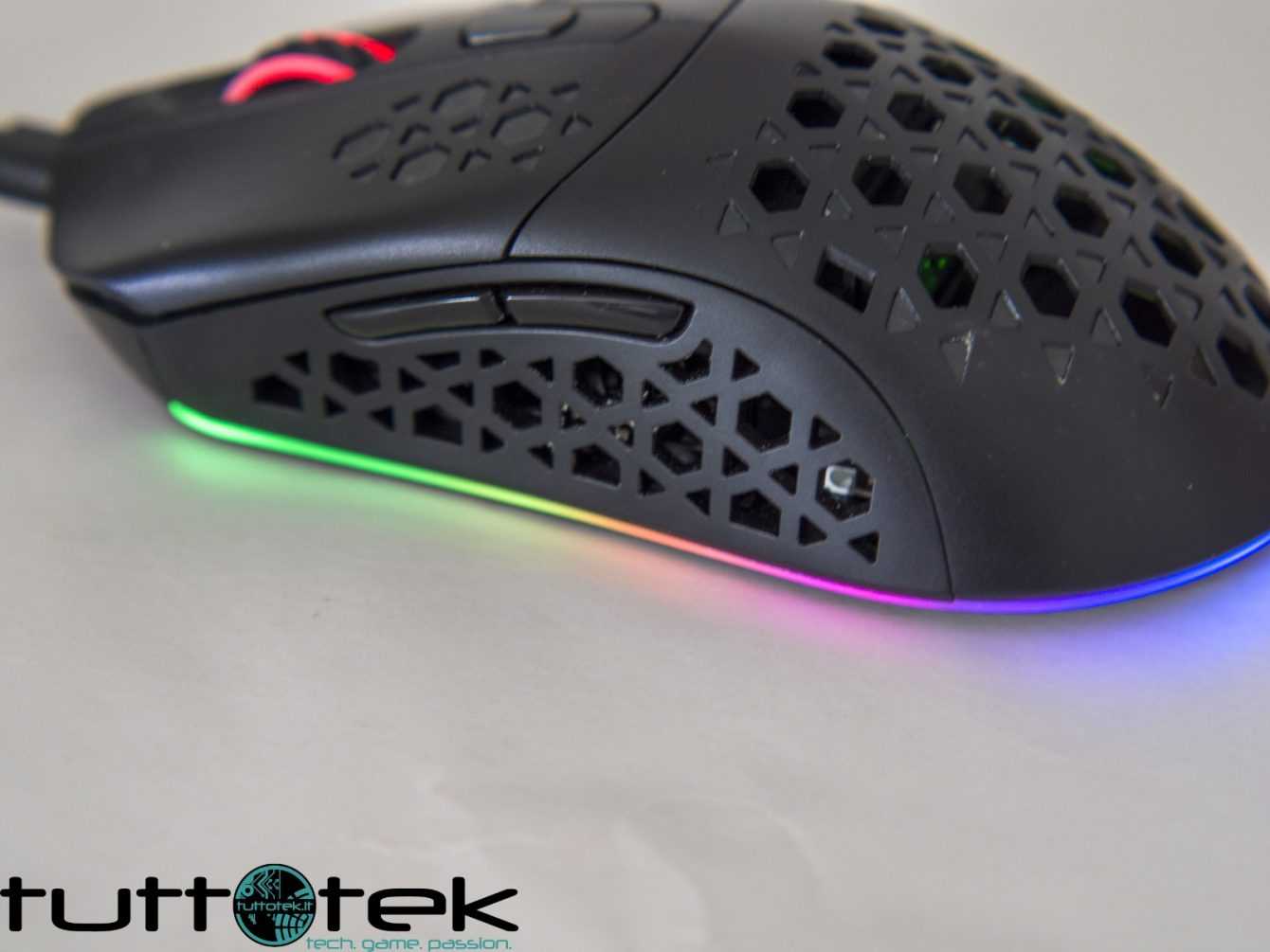 Any good mouse, especially if designed for gaming, must be accompanied by a program that enhances its use more and more. Giving detailed information at all times is essential to correct the parameters as quickly as possible. However, personalization is also important. This will make it easy switch from one game to another while maintaining maximum performance at all times.

While there is every intention of the company in wanting to push its peripherals higher and higher, there are still some minor niggles that should be improved. Let’s take the mouse for example. Although 6 programmable keys are a number that may seem discrete, we must remember that three of these are the standard keys present on any mouse for more than two decades now.

To complete the picture we find the usual two side buttons e one dedicated to the PPE switch placed under the central wheel. Even these can now be cataloged as standard and, precisely for the gaming side, we believe that by now we should focus on at least 7 keys. This way you could have two keys arranged under the wheel for increase or decrease the PPE, avoiding having to select the side ones for this function.

It is very inconvenient to have to switch in cycle for 5 profiles just to reach the previous one. Not to mention that, in an excited phase of the game, there is the risk of “skipping” and therefore having to do the whole lap again. 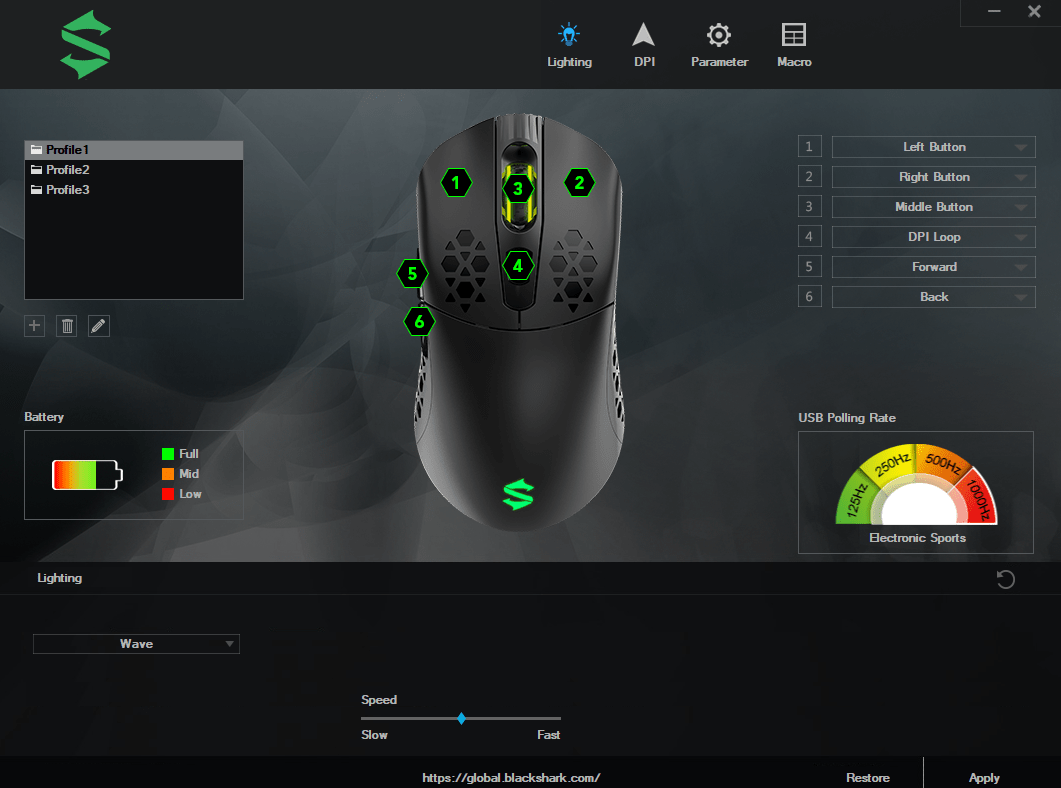 To one customization of the keys already castrated at the start then there are other problems due to unsynchronized effects and some communication problems between software and device. But let’s order and take it easy. As we said earlier the mouse is equipped with 3 lighting profiles: two RGB and one fixed. Having uniform, or at least coordinated, lighting would be the minimum.

Even if you want to leave out the fixed lighting of the logo, there is an asynchrony between those RGB that could have been avoided. The effects do not go in time and we will end up with the wheel illuminated by a color, while the part underneath will have already passed over. It’s a bit like it each was subject to a different effect, although it is not possible to select an effect for each zone. On a practical level, nothing changes obviously. However, you can guess that, when you tend to have all the lighting of the various peripherals go at the same time, seeing a mouse with two effects is not the best.

Another small flaw then concerns the communication between the device and the software. The problem is not at the level of the mouse configuration, but at the level of statistics. In fact, the program shows the battery level. However, when it is in office the latter does not update except once the cable has been disconnected. Obviously this small inconvenience can create confusion in the user who may believe that something is wrong with the device. 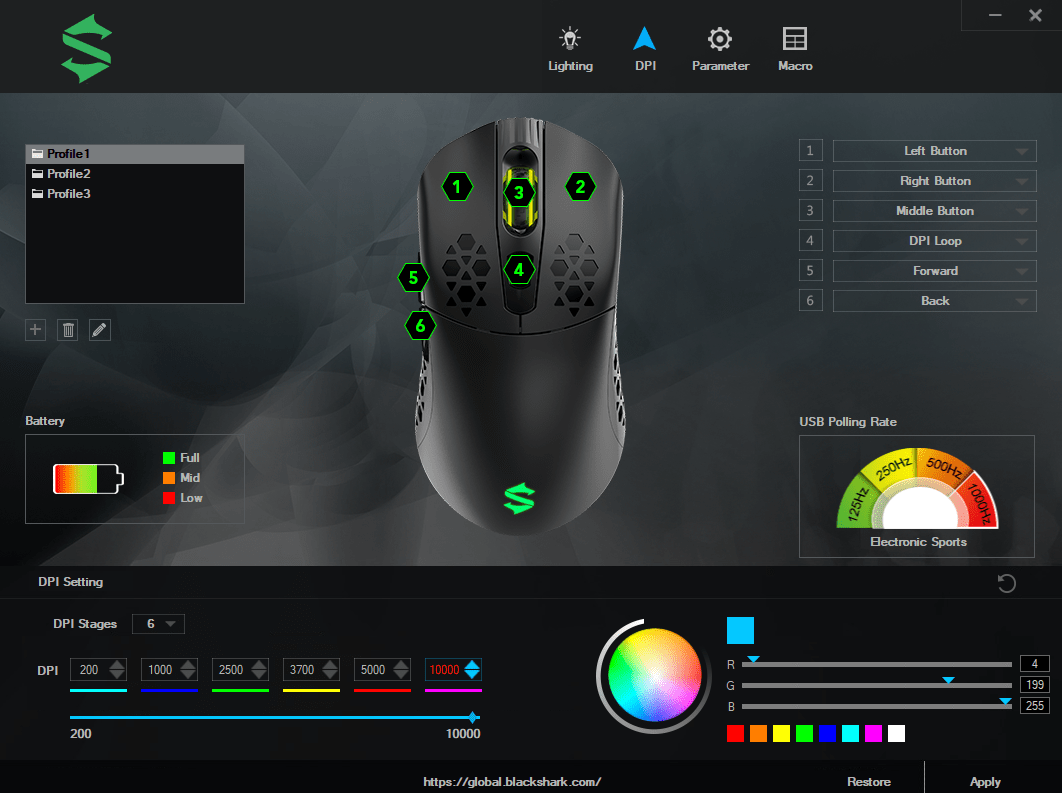 Now let’s talk about how the Mako M1 performed during our gaming sessions. Let’s face it, 10000 DPI is really good, but unfortunately they are not all. If we were to consider only this parameter, surely the mouse would be positioned in a good part of the ranking and for many genres it could also be so. Although therefore there is a good “glide” with the slightest movement, we note with regret that the tracking is not the best.

A lot of course depends not only on the sensor, but also on the surface you use. Trying it on various levels, even among those not really suitable for the purpose, we immediately noticed some discrepancies between the movement performed and what appeared on the screen. Let’s be clear, we’re still talking about very small variations that do not in the least affect the experience in various types of games such as i MOBA or the strategic.

A very different speech must be made for shooters. In fact, a similar conformation of the mouse should adapt more to this type of video game. However, precisely because of these minimal traceability errors, there is a risk of miss our goal by an inch and jeopardize the game. This of course it is valid for professionals and for those who play at the highest levels. Different speech applies to newbies or amateurs. In that case you will be able to experience good gaming sessions as such small errors will not make much difference.

Contrary instead the battery surprised us. Although the company had only claimed 6 hours of gameplay, with RGB lights on, we were also able to play longer on a single charge. Much of the credit also goes to the automatic stand-by which allows you to preserve part of the charge when the device remains stationary for a few minutes. Furthermore, it is also possible to use the device while it is charging with the cable. This will allow you to play without having to stop, even if the device is turned off. 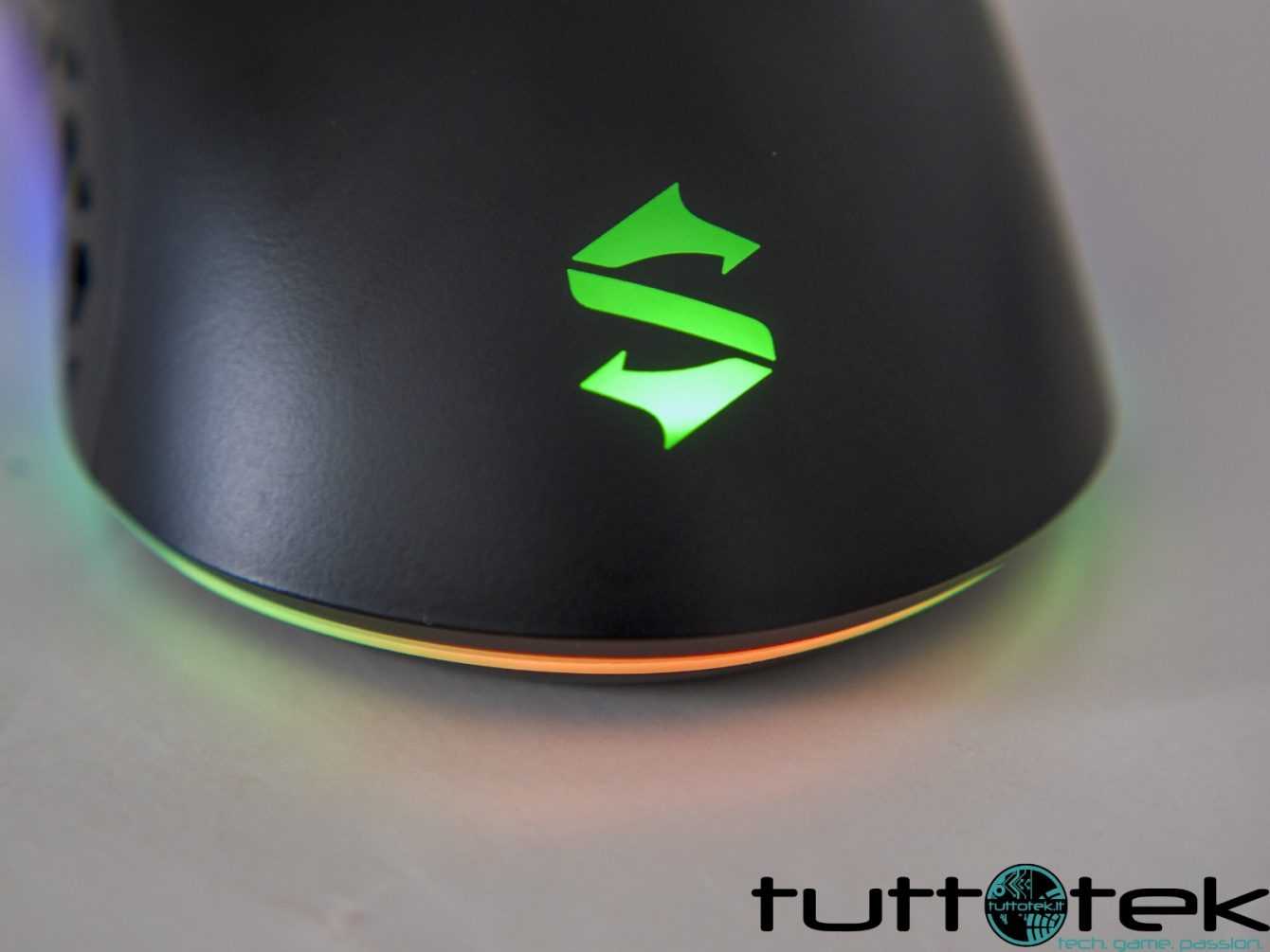 We’ve come to the end of this review on Black Shark’s Mako M1 mouse and now it’s time to take stock. The mouse looks like a good peripheral in general. The possibility of using it both wireless and wired and to interchange the body it allows us to use it that is always different, depending on the needs of each user. While tracking isn’t the best when you want to compete at a high level in games where aim is everything, however, it allows us to experience good amateur sessions.

We were positively surprised by the battery which turned out to be more durable than the company claimed. Six programmable keys are not that many e the absence of a second button to increase or decrease the DPI feels a lot. Also on the software side there are still some small problems to be solved which, although they do not affect the general experience so much, however they can make us turn up our noses.

The price is also not the best. The mouse is in fact for sale at a recommended price of € 69.99 which is in a bit high and places it with far more aggressive competitors. However if at a discount it can become a really good deal, especially for those who want a good one reliable mouse and is satisfied with not having top performance. For this review on the Black Shark Mako M1 mouse that’s all. To not miss further reviews and news from the hardware universe, keep following the pages of techgameworld.com! 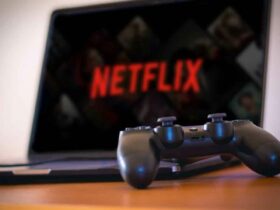 How does Netflix Games work? Everything you need to know

Acer Chromebook 314 review: not for everyone