We are back to explore the lands of Bravely Default II through the second and latest free trial version, the Final Demo, before the game’s release and we’ll talk about it in this preview

Even if it were not a pregnancy, about nine months have passed since, at the end of last March, we immersed ourselves for the first time in the world of Bravely Default II. Nintendo, at the time, had released a demo that brought to life a section that would not be included in the final game. A taste, therefore, more of the mechanics than of the game itself and that had already left us widely impressed, so much so that we wrote a full preview of it. Nine months later, we said, we find ourselves here again pouring on (digital) paper the sensations that the next Square Enix pearl, exclusively for Nintendo Switch, seems to want to promise us.

In recent days, in fact, it was released on the Nintendo e-Store a new demo version of Bravely Defalut II, called the Final Demo. Leaving aside the apocalyptic name, this new trial version allows us to return to the city of Savalon, the same as that of March, to live an experience that we will also find in the full game. Although therefore the setting is practically the same, the facts narrated will be totally revisited, as well as other NPCs will be present. Let’s roll up our hands and start talking about our first (now “second”) impressions of Bravely Default II in this new preview! 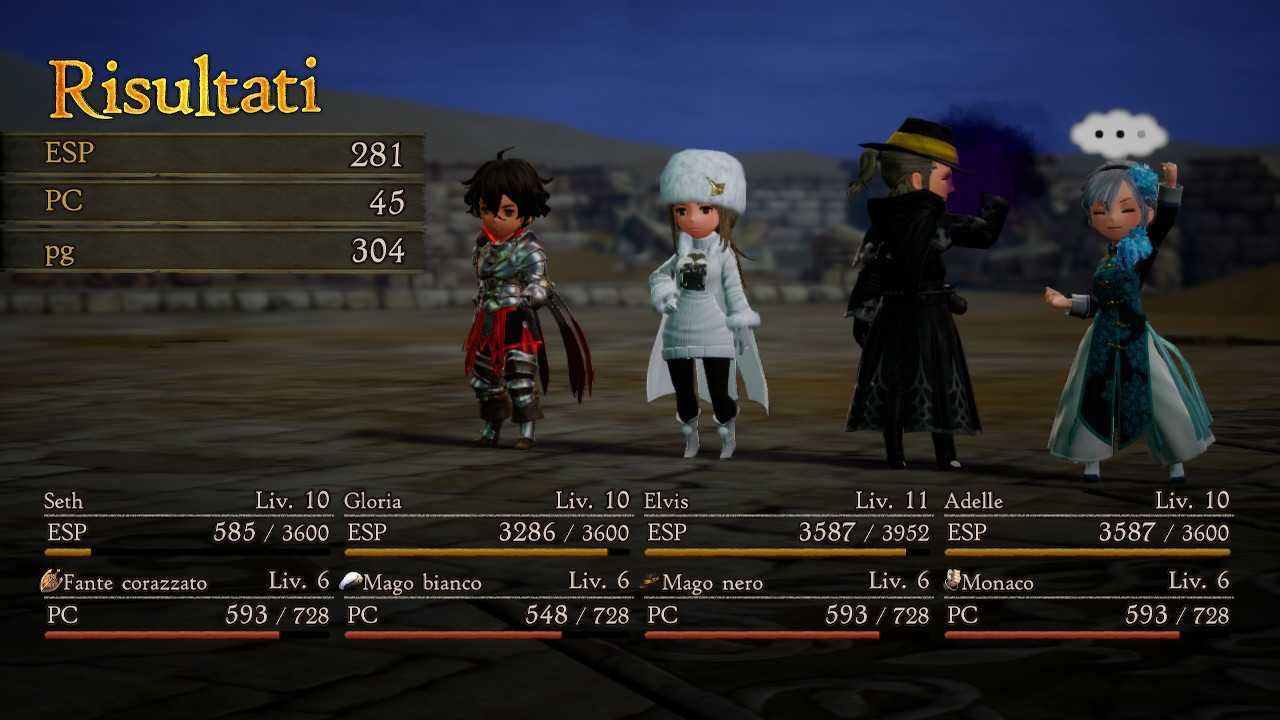 The group of protagonists will always be the same: the sailor Seth, Princess Gloria, the scholar Elvis (always too similar to Ardyn Izunia) and the mysterious Adelle. The four are on a journey in search of elemental crystals, of which the first, that of Water, seems to be in Savalon. Quite simple to guess, considering that half of the city is completely submerged by water, for no apparent reason. To the cheerful and interesting cast, the Prince of the city of Savalon, Castor, will be added as an uncontrollable character.

We will therefore have to find out who has taken possession of the Water Crystal, recover it and take our first step towards the salvation of the world … or almost. In fact, this Demo has a limited duration. A notice, before the start of the game, will warn us that we will have a maximum of five hours to be able to spend inside Bravely Default II. However, even if you have not reached the time limit, the trial version will stop at a specific point, preventing you either from continuing further or, sadly, from carrying your save data into the full version of the game. A real shame, considering that the same notice will confirm the fact that this section will be found in its entirety in the title due out in February 2021. 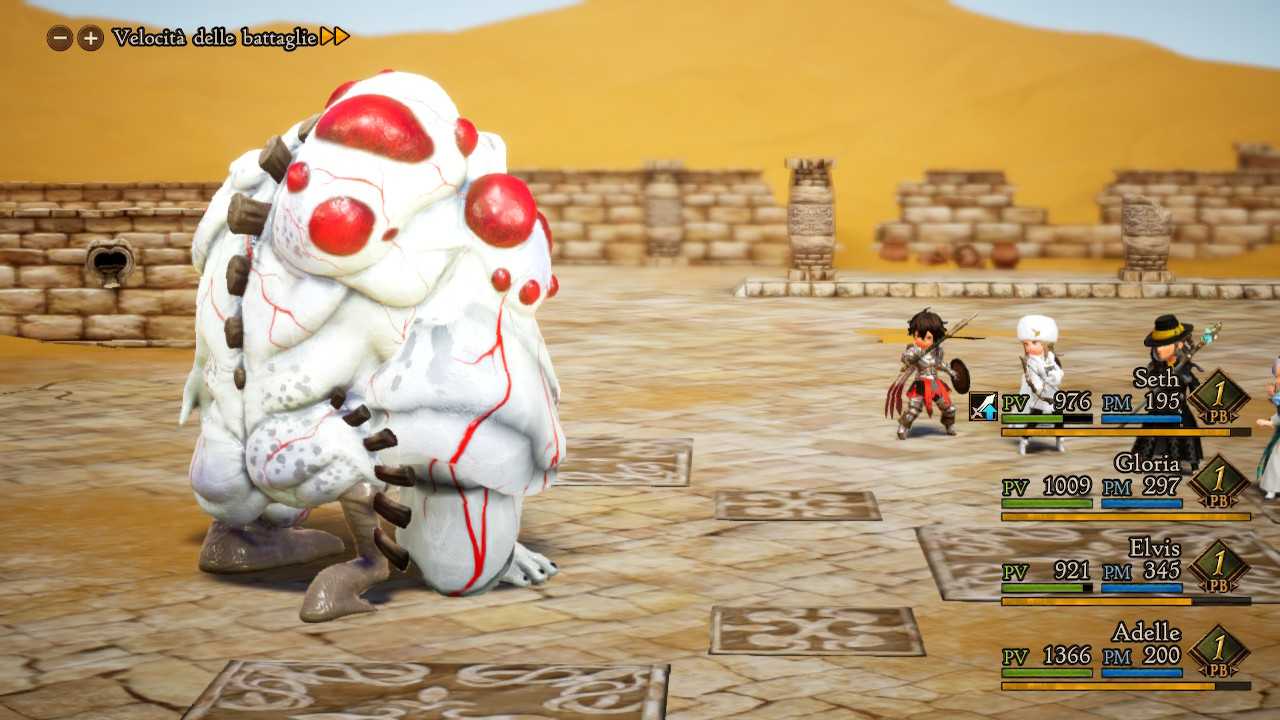 The game, however, throws us directly into the action of the world of Bravely Default II. At the level of the combat system, nothing has obviously been changed. The mechanics of Brave / Default are always present and central to every fight, as is the class system. The latter will be preset in this demo, but we can still modify them as we prefer. We will also come in possession of two different Asterisks, that of the Bard and the Tamer. Getting two in such a short amount of time allows us to understand how versatile the Jobs will be within the final version of the game.

Compared to the first Demo, the difficulty has certainly been filed and improved. We were in fact perplexed, in March, by the level of strength of the simple enemies scattered in the word map. In fact, especially in the first few fights, it was almost difficult to survive without a good amount of healing and MP for white magic. This Final Demo was, however, much more accessible in the (little) action that we were able to experience. Perhaps the difficulty level has been lowered too much, in reality, considering that now the enemies weaker than us will flee directly into the map and, if we really want to grind, we should chase them. Tackle! 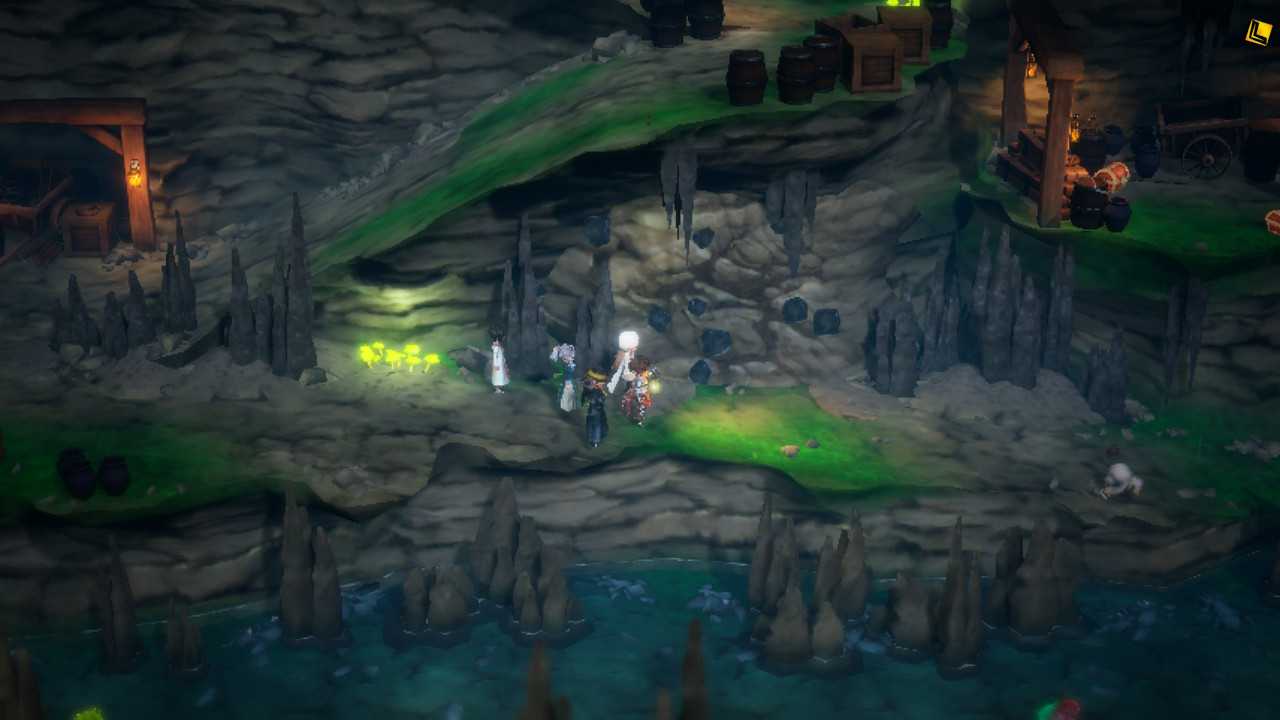 But how much do they talk? – Bravely Default II Preview Final Demo

These first five hours of play were also rather slow from a narrative point of view. Lots of dialogues, all very interesting for the background of the city of Savalon and the protagonists, we admit, but the size is such as to be too bulky. The hope is that, in the final version of the title, the following chapters are a bit more balanced between chatter and action.

In the Final Demo it is possible to explore two different dungeons, the first of which in common with the first Demo. The two final bosses are both very difficult and difficult to defeat, but they know how to give their satisfactions, especially to fans of strategy and JRPG. Exploration also remained satisfying and interesting as in the first Bravely Default: there will be many secondary roads and hidden ravines that will lead you to discover secrets. Trunks, items, weapons and new upgrades lurk around every corner, as always you have to be careful to turn around and look carefully. 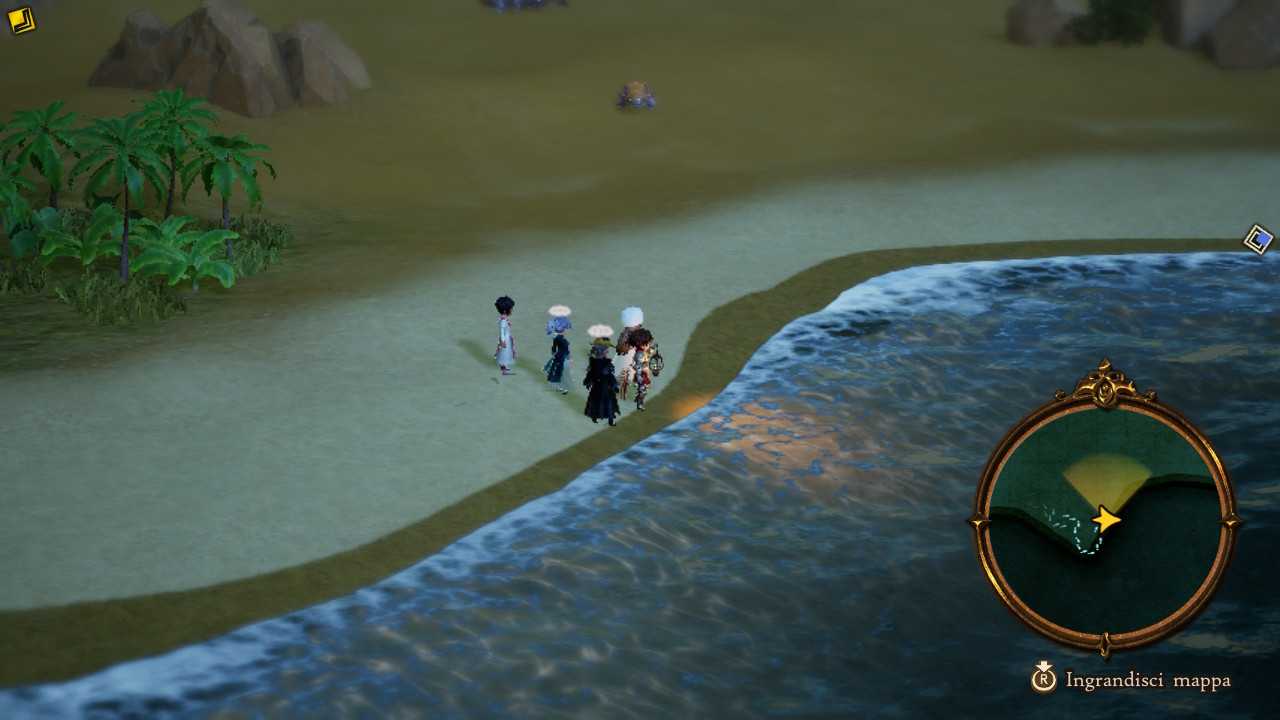 Artistically speaking, the Bravely Default series has always been very inspired, even in the first chapter originally released on Nintendo 3DS back in 2012 and therefore equipped with decidedly lower performance hardware. What we also noticed in the first demo of the title, is an impressive disproportion in the definition of the textures between the portable and the docked mode. In this final demo, the impression remains that both the characters and the environments in the laptop are blurry and not very sharp, unlike the general beauty that we can appreciate on the TV.

Another small (and let us say it, strange) technical flaw concerns the dialogues. Although it is possible to select and deselect the automatic advance and the speed of the same, it practically always happens that, for some reason, the dialogue scrolls automatically, not allowing us to read through. 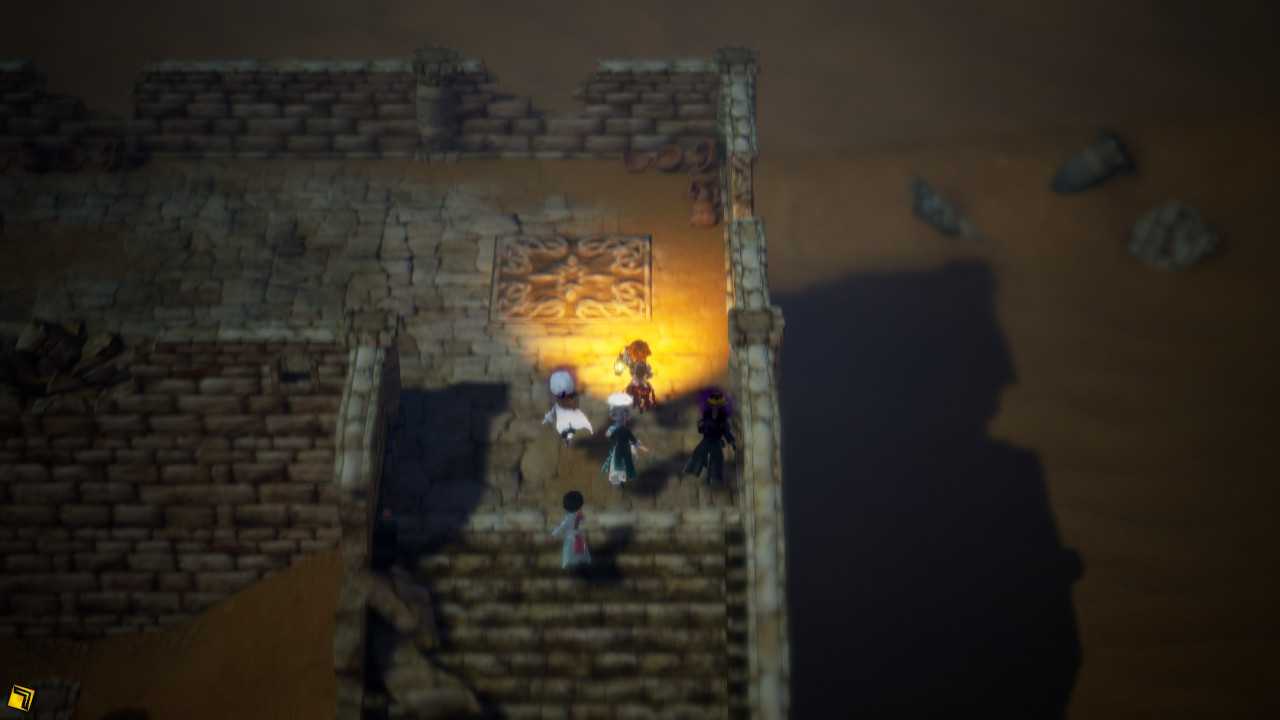 For the rest, we are always fascinated by the very high level of the artistic direction of Bravely Default II. The city of Savalon is always beautiful and, in this Final Demo, it is also expanded with new zones and secrets. The territories in its surroundings know how to wisely alternate huge desert expanses with luxuriant oases, passing through the ever-present ruins. The ability to play with the camera also gives truly unique and unforgettable views and perspectives, especially thanks to the 2D / 3D watercolor backdrops that make the deformed characters stand out even more.. A huge applause also to the soundtrack, which knows how to alternate Arabic-flavored songs with fantasy classics, without ever being plastered or inappropriate.

Furthermore, the amount of secondary and secret missions is already quite impressive, considering that we are still talking about a trial version limited in time. The possibilities of customization, growth and variety that can be given to the party through the system of jobs, equipment and skills is truly impressive. JRPG fans get ready: it looks like a great way to spend several hundred hours. 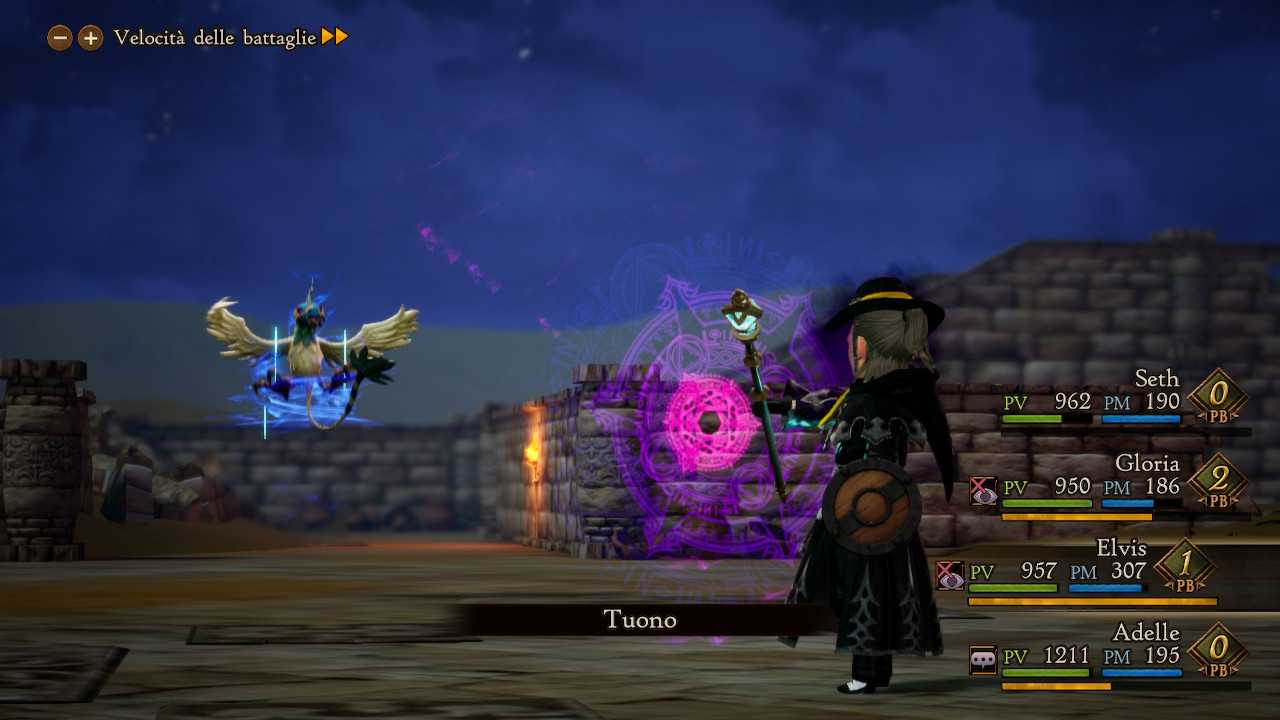 We look forward to!

Our now second preview of Bravely Default II ends here, based on the Final Demo released on the Nintendo Switch store. Despite some small purely technical flaws, which we hope will be improved and patched before the official release of the game on February 26th, the title of Square Enix exclusively for Nintendo promises to be exactly what we JRPG fans want: numbers, statistics, equipment, side missions and titanic bosses to take down. All this, topped off with a splendid artistic direction and a breathtaking soundtrack. Bring it on, Square Enix!