In this review we will talk about Curved Space, the particular arcade-style shooter entirely set in space

The current videogame market stands out positively for its vastness and for thehuge differentiation of his offer. In fact, if on the one hand we find the usual big majors, which provide new triple A titles on an almost monthly basis, on the other hand there is thehuge undergrowth independent developers who, despite not being able to compete with the greats of the industry from an economic point of view, manage to surprise us by making games with unique personality.

Without a doubt Only By Midnight Ltd., the study he carried out Curved Space, is part of this second category and in fact, for better or for worse, the title contains within it all the main characteristics of this type of production. It is a game of relatively small size and from limited depth which, at the same time, is capable of attracting attention thanks to a gameplay from unusual features is one personal graphic style. Let’s find out together in this review if these particularities were enough for Curved Space to rise above mediocrity.

Hunting for spiders in space

As mentioned in the first paragraph of the review, Curved Space is a game of a size that is anything but impressive. This characteristic also derives from the desire to take i arcade games, which are characterized by their simplicity and immediacy. This inspiration is especially visible in the management of plot which, despite being extremely thin, manages to convey to us what we need to better understand the scenarios that we will cross in the game.

Curved Space is set in a remote future, in which humans colonized space and began to extract energy from the cosmos by building small space bases. The accumulation of energy caused by these stations, however, attracts the attention of one alien race they come from the appearance of arachnids and insectoids and, consequently, of spaceships prepared for defense of the outposts. Since the specimens of this alien race are themselves quite rich in the same type of energy, the defensive spacecraft will also be equipped for their capture. 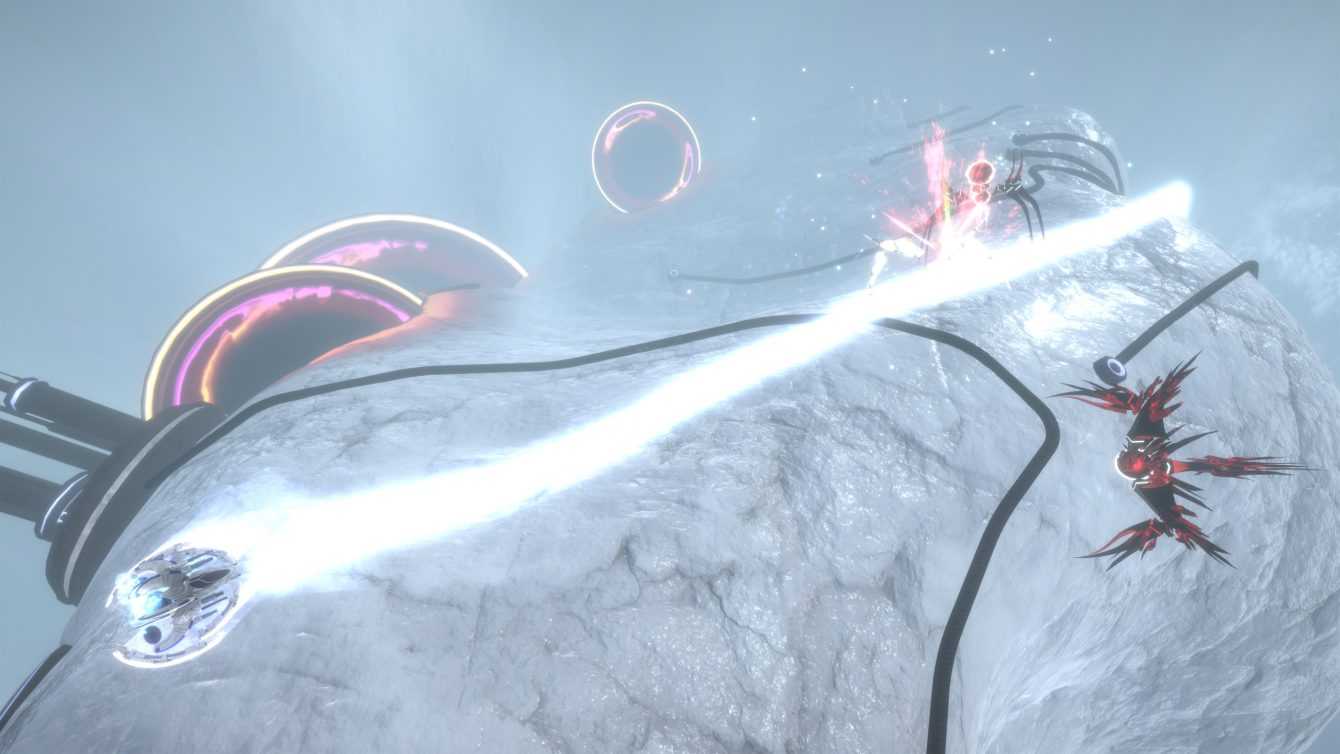 Curved Space is one third person shooter in which the player controls a small spaceship which, depending on the case, will have to destroy or capture as many aliens as possible. The game is divided into short levels, frenetic and set within small maps; in them, in addition to trying not to be destroyed, the player will have to try to complete the goals in the shortest possible time. The completion of the above will ensure theaccumulation of points and, in some of the game modes, advancement to next level.

The title is in fact characterized by the presence of more mode: the classic Countryside, which allows you to unlock new maps; Arena, which consists of a series of specific challenges that allow the player to explore all aspects of the gameplay; Survival where, as the name suggests, our goal is to survive as long as possible; Endless, in which we can play in any of the scenarios without worrying too much about scores and achievements. Finally, there are also the Daily challenges, which lead us to confront the rest of the community and which are accessible only after the completion of the Campaign.

The game mode that most exposes the limits of Curved Space is the Campaign which, despite giving us the opportunity to visit new maps and leads us to confront a sufficiently varied number of enemies, it is distinguished in the negative by the excessive repetitiveness of the proposed objectives. To redeem it in part, however, there are the boss fight, fun and sufficiently varied. Conversely, the Arena mode is particularly compelling precisely because it is characterized by a vast diversity of objectives to be pursued.

In the first paragraph of the review we mentioned how the developers of Curved Space have paid a lot of attention to the creation of the graphic design of the title. It is therefore not surprising to note that this is not only the case rich in detail, but also endowed with a personality capable of affect positively on playability. The maps, which represent space bases e celestial bodies, are characterized by curved surfaces widely explorable. The scenarios dedicated to the bases then give the possibility to move on several sides of the structures.

Through this expedient, the game gives us the fascinating feeling of being attached to a body floating in the cosmos. However, it is not limited to this: the structure of the environments in fact affects the dynamics of the game and must be taken into account for the choice of the weapons of the strategy to be adopted to better complete the missions. This type of setting, also given the high pace of the game, can be difficult to read for the player, but it is undeniable that it is useful for making the game levels intriguing that, otherwise, would have suffered from their limited size.

Finally, the aesthetic of the title also contributes alien design: made with simpler and more geometric models than those of the environment and spacecraft, they appear to us as creatures from another dimension. As already mentioned, these are then present in different types and varieties which, in addition to the unique behaviors and attacks, are distinguished by the different designs. 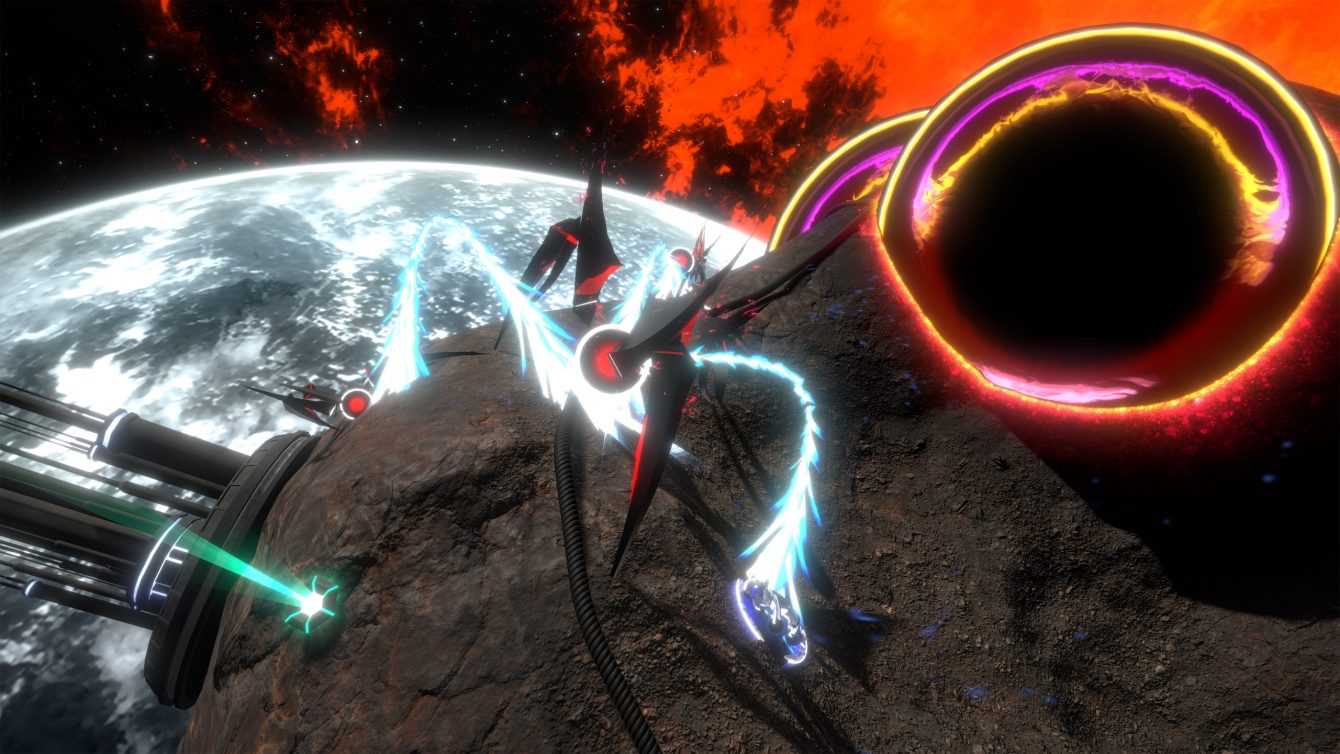 As repeated on more than one occasion during this review, Curved Space is a small game that manages to stand out thanks to its personality. This derives from the attention paid to some specific aspects of the title, the good realization of which helps to almost completely hide the limits present in other areas. The choice of making a particular exploration system is able to hide the reduced size of the maps, while the proposition of different game modes makes gameplay limitations less obvious.

This certainly does not mean that the title is free from defects and, in fact, it lacks longevity. In the long run, the lack of depth of the game comes out, but even in this case the impression one gets is that the latter is an expected occurrence. The game does not want to be a massively immersive experience that accompanies the player through hours and hours of content; on the contrary, it bets and manages to deliver a immediate entertainment which, despite its simple nature, does not give up on quality.

Curved Space was published by Maximum Games last June 29th. The game retails for € 19.99 and is available for PC, PlayStation 4, PlayStation 5, Xbox One, Xbox Series S, Xbox Series X and Nintendo Switch. You can buy this and many other titles through the Instant Gaming platform. Finally, to stay updated on all the new releases and the most relevant events in the videogame sector, stay tuned with TechGameWorld.com.

Captain Saber and the magic diamond: in cinemas from 5 August