Sony fans will surely remember Crypto and its adventure on planet earth. Well, after years our alien also lands on Nintendo Switch in the remake of Destroy All Humans, and this is our review

After its return to PlayStation and Xbox, Destroy All Humans also lands on Nintendo Switch. The franchise dedicated to the adventures of Crypto-137 it is presented to us in a modern key with a remake that aims to rekindle the public’s interest in a decidedly atypical and particular genre. They will have succeeded the boys of Black Forest Games to readjust and correct the weaknesses of a title designed (and produced) for the first PlayStation 2? Let’s find out together in ours Destroy All Humans review for Nintendo Switch!

Beware Grounders, Crypto is back

Destroy All Humans does not have a well-defined plot, but rather guidelines that surround a story that came out directly from the most traditional and stereotyped science fiction. We take on the role of Crypto-137, an alien from the planet Furon with the aim of conquering Earth and recovering from humans the DNA root. However, when he lands, Crypto finds himself having to “deal” with cows, farmers and the government armed forces called Majestic, which will make his life difficult.

It is clear how the will of the title has remained unchanged. The intent of the game is to present an America of the 1950s with its merits and its exasperated defects, presenting a sample of characters ranging from the ignorant peasant to the exponent of Marccattismo. Between satire and cliché quotes to the most vulgar science fiction, Destroy All Humans proves itself still today characterized by a casual and particularly current irony, giving an experience faithful to the original one but with some small corrections. But let’s take it easy. Without spoilers, let’s dive deeper into Destroy All Humans by continuing with our review. 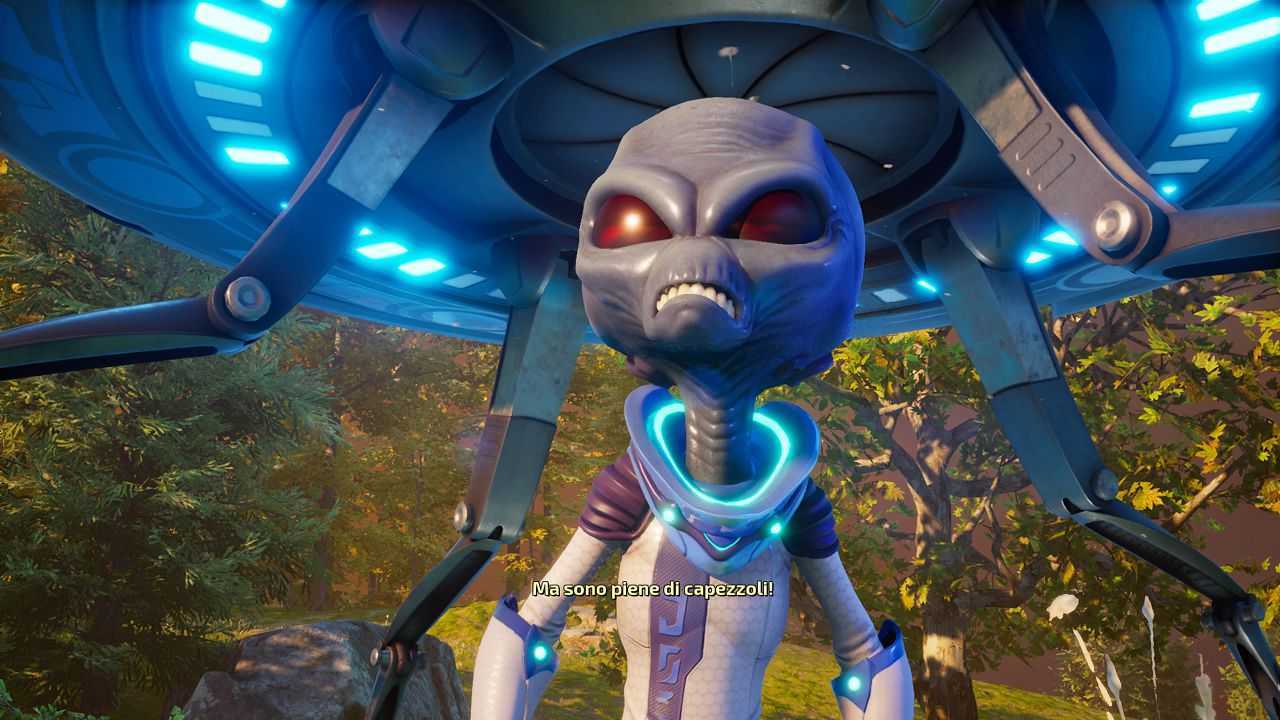 Anchored in Tradition – Destroy All Humans Review for Nintendo Switch: Crypto is Back!

Destroy All Humans per Nintendo Switch, exactly like the original version of the game, consists of 22 missions. These missions, which have remained unchanged, will take us to visit six different maps for setting and characters. The pleasant feature of these maps is that they are small open world areas where it is possible to complete the objectives, go hunting for collectibles. or give oneself to the extermination of the human race. To achieve the goal, Crypto will have a number of alien abilities at its disposal. Alternatively, it is possible to exploit the spaceship Furon to pulverize anything that comes within range.

While the game is fun for its light and easygoing nature, it must be said that it does not offer too much in-depth entertainment. Although the powers are many and the progression system is well structured, the gameplay is characterized by a certain repetitiveness Basic. To put a patch on the boredom factor is the short duration of the game (between 8 and 10 hours approximately), leading the player to conclude his adventure just in time. It’s not a mitigation, of course, but it saves players the worry of leaving the title halfway (at least). 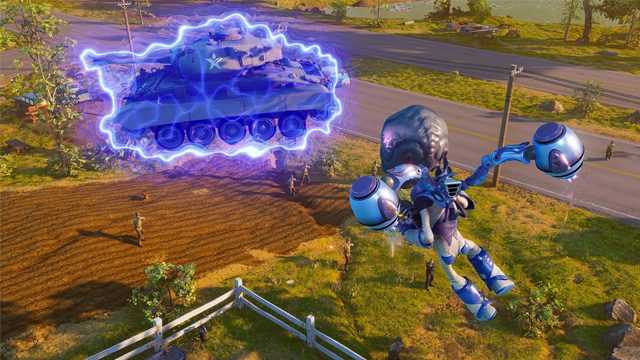 A New Character – Destroy All Humans Review for Nintendo Switch: Crypto is Back!

Although in the composition the game remains practically unchanged, in the gameplay factor we find some small but substantial innovations. First, the number of weapon and power upgrades has been tripled to give players much more freedom of choice. Unlike the original game, where only one power could be used at a time, here it is possible to combine powers to achieve the goal. This multitasking twist allows Crypto (for example) to use telekinesis and fire without having to choose what to prioritize, granting much more freedom for players and rejuvenating otherwise too cumbersome gameplay.

In addition to this, the character’s woody control system has been completely revisited and corrected, showing an excellent result even on the Switch’s joycons. In this regard, an unpublished one has been added “skateboard steering wheel” which allows you to move more quickly for short stretches. By pressing the same button instead, Crypto can dashare to dodge the hits of the enemies. 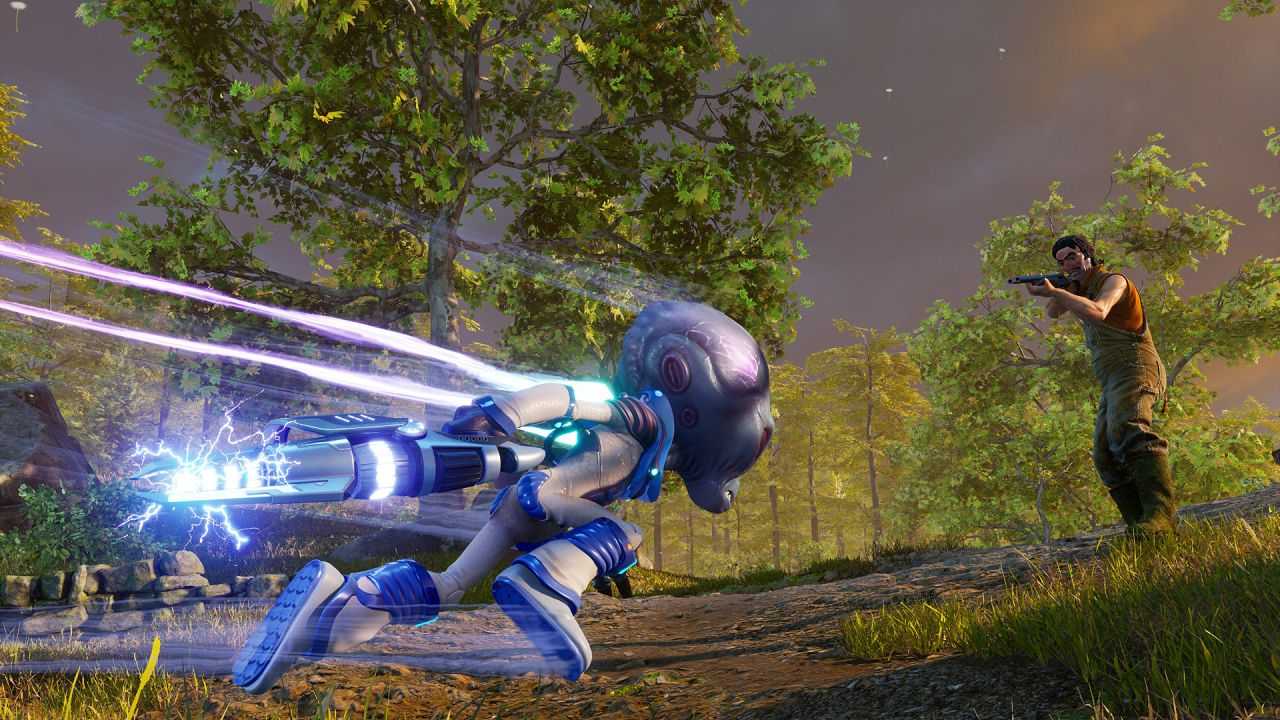 We Are Usual – Destroy All Humans Review For Nintendo Switch: Crypto Is Back!

Despite the many innovations and improvements made by the guys of Black Forest, the limits of Nintendo Switch jump out once again. Despite the game it turns out fluid and smooth console in hand, the graphics do not do justice to all the good work analyzed so far. When compared to the PlayStation and Xbox versions of the remake, it is evident once again a strong castration technique. In addition to this, the Italian dubbing and the audio sector in general are quite mediocre, but we feel we can overlook this factor to focus on the “graphics” problem.

The textures of Destroy All Humans on the Nintendo Switch turn out too indefinite and angular, the graphic effects are not convincing and the models of the other characters are not up to the level of the fixed console counterpart. We understand the technical difference between the machines and justify Switch once again, but at the end of the carousel such a gap it cannot be ignored. For the umpteenth time, unfortunately, the cap imposed by the Nintendo home console makes an excellent game lose points. Sin. 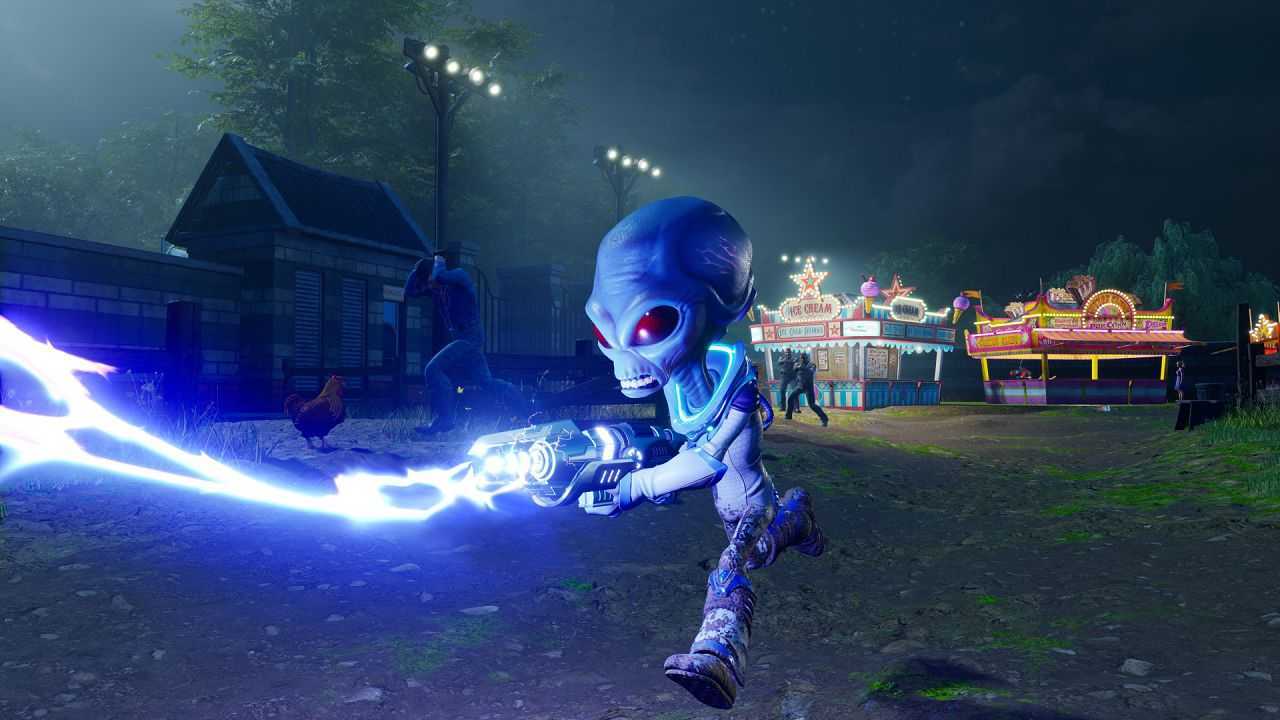 Net of what is analyzed in this review of Destroy All Humans for Nintendo Switch, we can summarize it as a game of light and shadow. The choice to keep the original mold with some small but substantial changes works great, making it an ideal game to be played on the Nintendo home console. On top of that, the additions to the gameplay and the reworking of Crypto’s control system make the everything much more fluid and immediate. This, however, is contrasted by a mediocre graphics, a sound that is not exceptional and an AI to review. Summing up we would like to recommend the game by Black Forest Games, if only to recover an icon of the genre or simply for some fun over the top.

Destroy All Humans for Nintendo Switch is available from 28 June at the price of € 39.99. As always, we greet you and invite you to stay connected on TechGameWorld.com for more reviews, news, updates and much more from the world of video games. Also, don’t forget to check out the Instant Gaming catalog for always discounted games. Hello!

A good remake in your pocket!