Spotted for the first time at EICMA 2019 in the form of a concept, after two years of waiting Ducati officially raises the veils on the new Ducati DesertX.

Created by the Ducati Style Center, the new bike from Borgo Panigale yes inspired by the Enduro motorcycles of the 80s, following criteria of essentiality and sturdiness. The DesertX comes with a 110 HP Euro5 engine inherited from the Monster and the Multistrada V2: a mix of the latest technology and a unique character that puts Ducati back on the off-road road.

The new DesertX is a motorcycle with an intense aptitude for off-roading, which effectively pushes the limits of what can be done with a Ducati. And from what we see in the video of his presentation, there is no shortage of reasons. Desert dunes, narrow off-road paths, dirt roads and winding mountain roads, with the DesertX the most adventurous motorcyclists will have no limits, as the slogan “Dream Wilder” that accompanies the launch of the new enduro says.

And this will be possible starting from 21 “front wheel and 18” rear wheel, ad hoc choices to tackle even the most challenging dirt paths. The development was specifically focused on off-road combined with the precious road experience of the Italian house, which together give life to a bike that, according to Ducati, is responsive, easy to handle, comfortable on any route, including asphalt.

Ducati DesertX, 80s design that is always in fashion

As mentioned, its design is one reinterpretation of the Ducati Style Center of the Cagiva Elefant which raced in the Dakar in the 80s / 90s. Hence, the colors play with white, red and black throughout the livery. Visually, the bike is made up of three differentiating macro elements. A single volume that includes the tank and the side protections, the saddle and the fairing, in which the characteristic double headlight is included, which further reinforces the uniqueness of this bike. 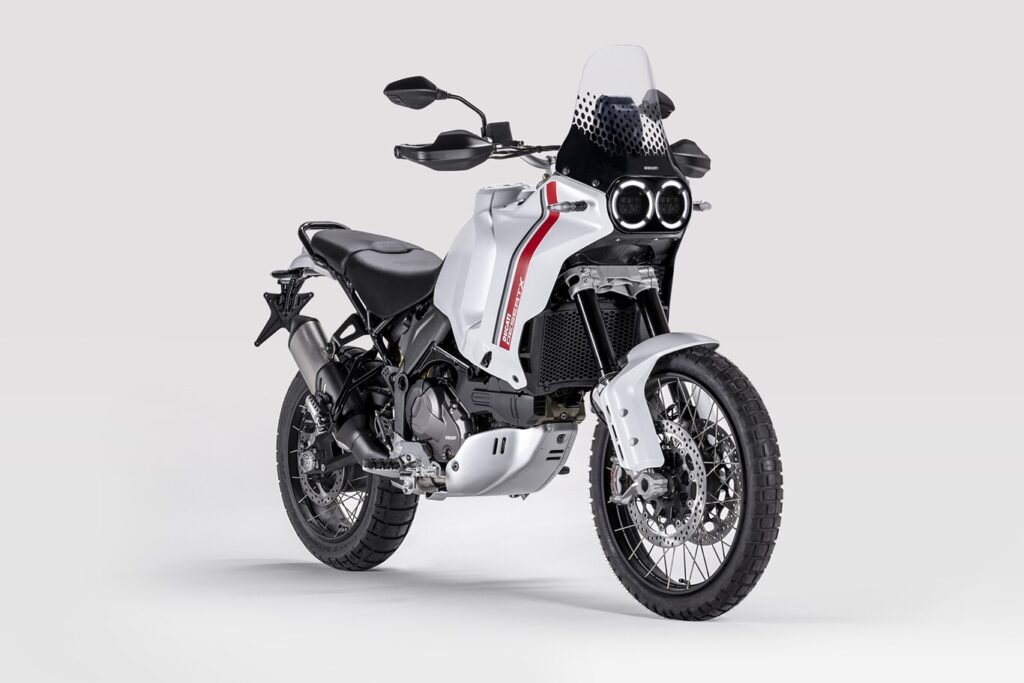 Furthermore, thestylistic emphasis is provided through the use of black and white areas. The surfaces in contact with the rider are suitably large and harmoniously connected to best support each phase of off-road driving.

To get around it, it uses the 11 ° Testastretta engine with 937 cc liquid cooling and Desmodromic distribution. An engine characterized by excellent reliability, being in capable of delivering 110 hp at 9,250 rpm and a maximum torque of 92 Nm at 6,500 rpm while remaining Euro5 approved. The engine features the same improvements seen on Monster and Multistrada V2, including the extremely light and compact 8-plate clutch and the gearbox equipped with a ball-mounted selector drum to reduce friction and improve the precision and smoothness of the engine. All of this also contributes to a reduction of the overall weight of the engine by 1.7 kg compared to the previous version.

To improve the feeling, designed specifically for off-road terrain, the change has been optimized, shortening all gears up to the fifth. On the other hand, sixth gear is long enough to be used on the road while maintaining a regular engine speed. In a nutshell it translates into lower fuel consumption and a higher level of comfort.

Cycling that fears nothing

As for the chassis, the frame design of the new Ducati DesertX includes one new multitubular steel structure which works in conjunction with long-travel suspension with specific adjustments, ensuring efficient operation even in the most demanding off-road conditions.

The front suspension consists of a 46 mm diameter Kayaba inverted fork with a total travel of 230 mm, while the rear one uses a Kayaba monoshock. Both elements are adjustable in compression, rebound and preload. The single shock absorber works in tandem with the aluminum swingarm, allowing rear wheel travel of 220 mm. 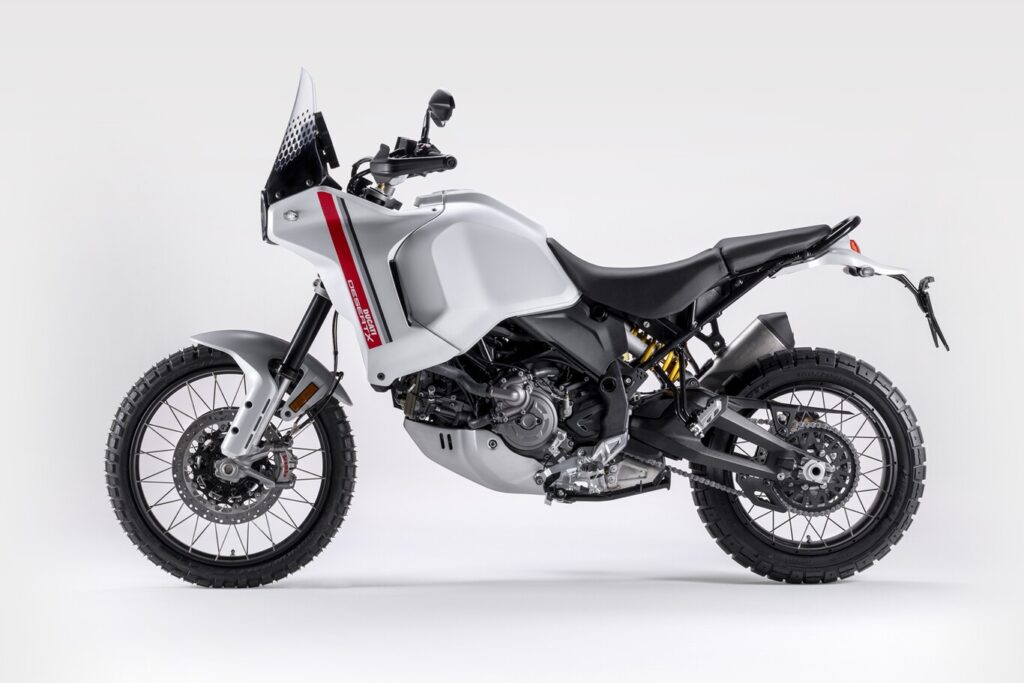 In addition, the Ducati DesertX has a generous ground clearance of 250 mm, a feature suitable for the most extreme off-roaders. The optimization of all these components has led to one reduction of its weight to 202 kg dry.

As previously written, its rims have unprecedented dimensions for a Ducati: 21 “at the front and 18” at the rear. These are equipped with Pirelli Scorpion Rally STR standard tires in the sizes 90/90 R21 front and 150/70 R18 rear, although it will also be homologated to fit both on-road and off-road oriented tires.

The braking system benefits from the ABS Cornering function. The front is characterized by pliers monobloc radials Brembo M50 with four 30 mm diameter pistons, axial pump with adjustable levers and double 320 mm disc with aluminum hubs. Behind, however, we find a single disc with a diameter of 265 mm, on which it works a twin-piston floating caliper, also from Brembo. The braking power dosage has been designed to offer great modulation on slippery surfaces, without forgetting that it provides the right measure of power for use on the road.

Another of the jobs that Ducati focused on during its conception was ergonomics. Developed during long and demanding test sessions on asphalt and off-road, the saddle-footrest-handlebar triangulation gives its best while standing and offers a good level of comfort even during “normal” driving on the road. Aerodynamic protection is ensured by the careful shape of the front and the size of the standard windshield (in case, a larger one is available as an option). 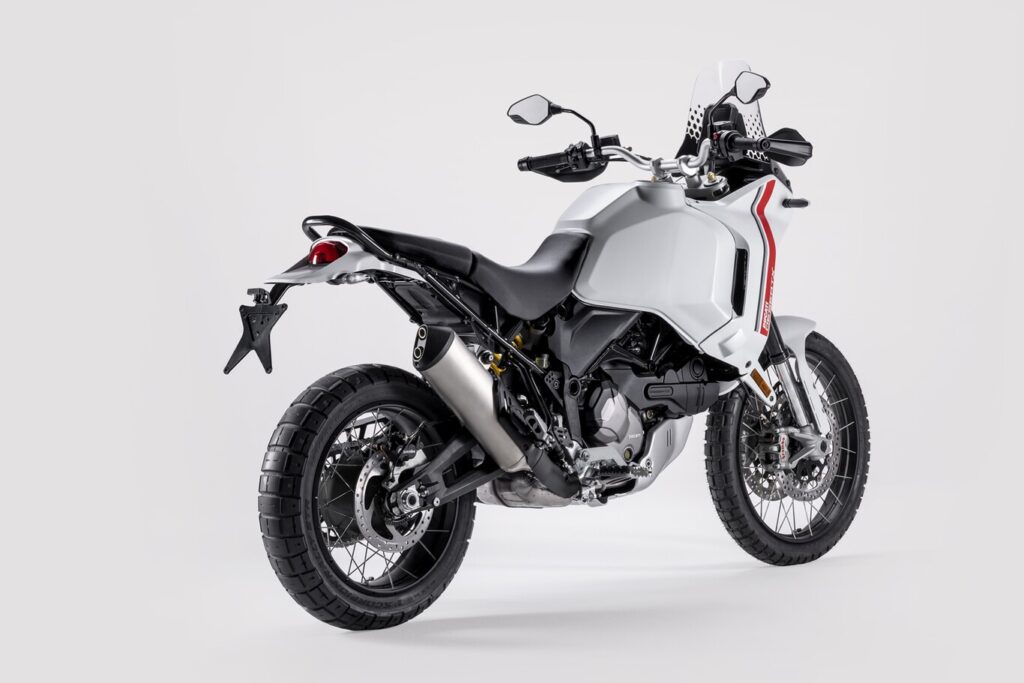 The autonomy to face long journeys is due to tank with more than 21 liters of capacity. If desired, it is also possible to mount an additional tank (available as an accessory) in the rear, which adds another 8 liters of fuel. The load capacity is also excellent, with its 117 liters of available volume that include side cases and aluminum cases, but always offered as an option.

Electronics for beginners and off-road experts

The electronic part relies on the latest generation systems, designed to offer performance and safety at the highest levels The new DesertX has 6 Riding Modes that work in combination with 4 Power Modes (Full, High, Medium, Low) that modify the power and reactivity of the Testastretta engine. The main changes are the specific settings for the Enduro Riding Mode and the preview of the new Rally Riding Mode, as well as Sport, Touring, Urban and Wet.

To be precise, with Riding Mode Enduro Thanks to the reduced power and specific control settings, the rider can tackle the most demanding roads with greater safety and off-road driving is made easier for less experienced users. Il Riding Mode Rally, instead, with maximum engine power and unobtrusive electronic controls, it’s designed for more experienced riders who want to get the most out of the DesertX’s off-road performance.

Present, and it could not be otherwise, too the Bosch IMU (Inertial Measurement Unit) inertial platform, with which it is possible to change the character of the bike according to the needs of the rider. As? By acting on the intervention levels of the various electronic controls available, such as how Engine Brake Control (EBC), Ducati Traction Control (DTC), Ducati Wheelie Control (DWC), Ducati Quick Shift (DQS) Up & Down e ABS Cornering. 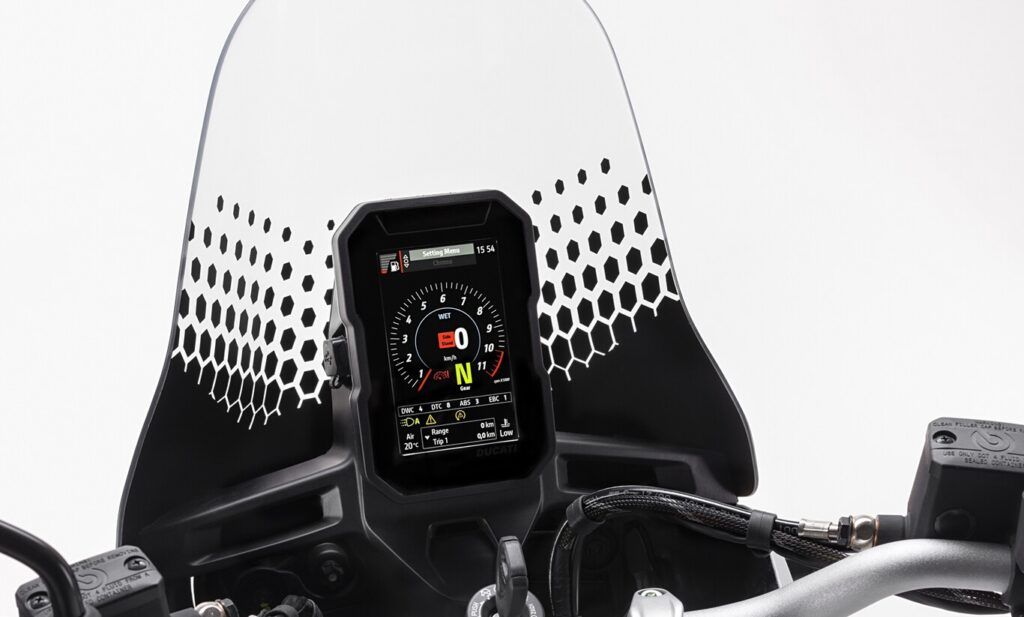 The dashboard of the DesertX is oriented vertically to provide clear information even when driving on foot. It has one screen a colors 5 ”TFT ad high resolution and is designed to integrate the Ducati Multimedia System. This allows the rider to connect the smartphone, thus activating new functions such as music and incoming / outgoing calls or Turn-by-Turn navigation (optional), which displays the direction to take directly on the screen.

The new Ducati DesertX will come to May 2022, with a list price starting from 15.990 euro (ex dealer). It will also be ordered in a version with a reduced power of 35 kW, which can also be driven by A2 license holders. For the latter, Ducati applies a € 1,000 discount on the price.

Steam Deck will be compatible with Windows 11: Valve confirms 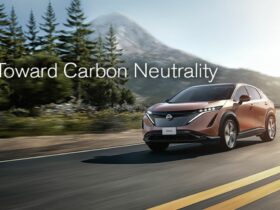 Nissan aims to become a carbon neutrality company by 2050 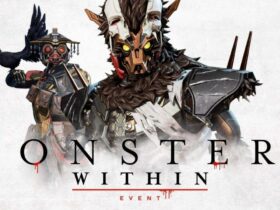 Apex Legends celebrates Halloween: here are all the scheduled events 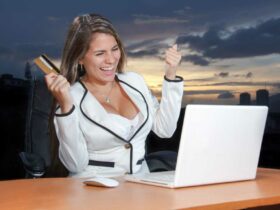 MediaWorld? The four tricks to save