Here is the review of Dude, Where Is My Beer ?, a graphic adventure developed by only two people that deals with a very important topic: beer

In these days pubs are at the center of public debate. The pandemic has changed many aspects of our lives, not least the evening habits. For many months we have had to do without having a cold beer in the company of friends at the trusted bar and, although lately it seems that things are returning to normal, the infamous Green Pass has again opened many discussions about its legitimacy. But this is not the place to talk about it.

In today’s review, however, we will talk about Dude, Where Is My Beer?, a nice old-fashioned graphic adventure developed by Arik Zurabian ed Edo Brenes, a couple of developers with a common passion for Pilsners. Or at least, this is what we deduced by playing their work. The game has been available for a few months on Steam: let’s see together what the final result is.

Who does not drink in company

Talk once more about how much la scena indie allowing the development and publication of very low budget works would be superfluous. A few months ago, we had the opportunity to review The Falconeer, a title developed by Thomas Sala in almost total autonomy. Similarly, today’s title is the result of the efforts of Arik Zurabian and Edo Brenes.

In a particular period like this, in which the production processes of triple A securities are forced to slow down abruptly, there seems to be more and more space for minor projects, with a high authorial and philological level. These are often genres of the past rediscovered and made new. Sometimes we have witnessed delightful variations on the themes of the classicsat other times, however, it was difficult to go beyond a simple nostalgia operation.

Let’s see together in this review what it’s made of Dude, Where Is My Beer? And no, it’s not a question. 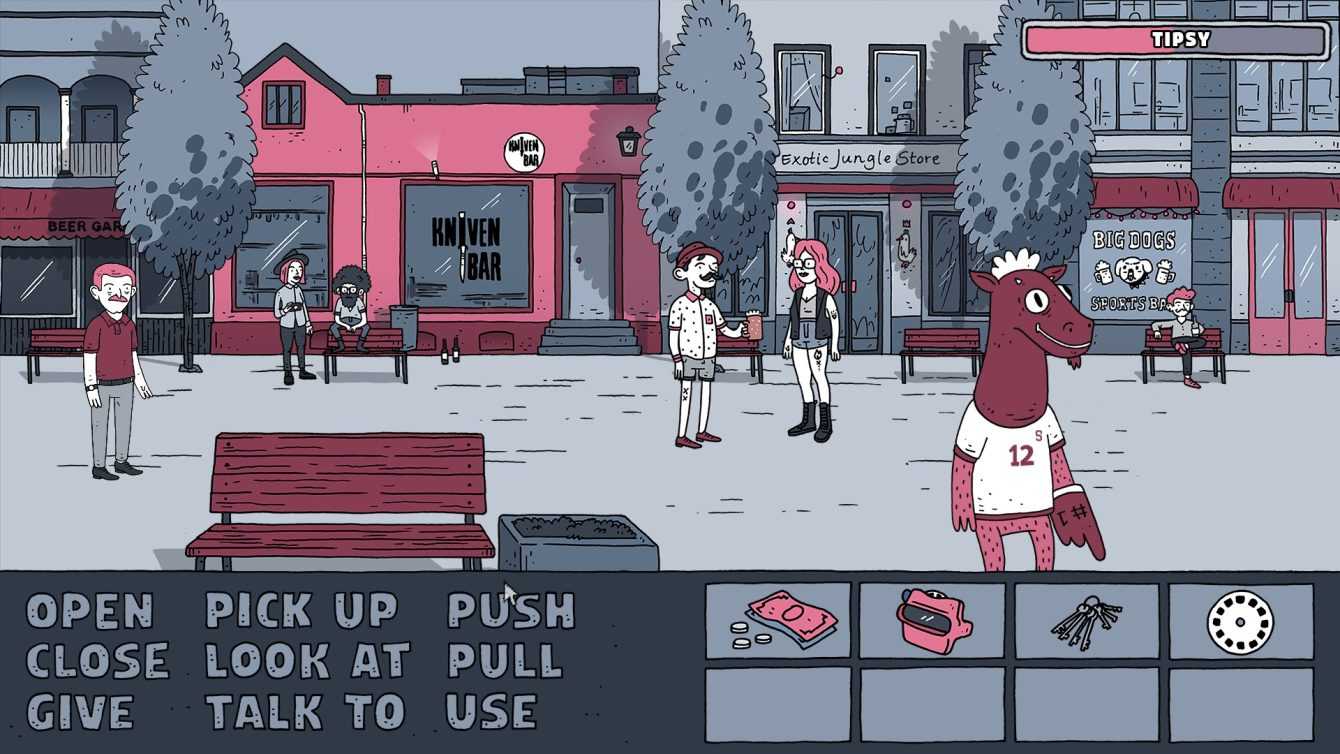 I Just Want To Drink A Pilsner – Dude Review, Where Is My Beer?

The protagonist of Dude, Where Is My Beer? is a nice traveler who, finally arrived on the streets of Oslo, he just wants to enjoy a nice and refreshing Pilsner. Once off the bus, however, he will have to face a terrible truth: it seems that a dark plot is underway in the Norwegian capital and that it is possible to find only radical beers chic composed of ingredients beyond all logic.

Have you ever been to one of those bourgeois breweries where you can order licorice and elderberry beers, orange and pear, and other similar amenities? Once in a while maybe there is, just to set a tone. The recall of a beautiful, simple, no-frills blonde, however, it is always around the corner. The traveler knows this well and is willing to do anything to get one.

In the course of the adventure, whose duration is around four hours, we will have the opportunity to meet bartenders and customers of all kinds, in what we can define a real bazaar of human oddities. From the club full of metalheads with nails instead of leather, to those full of girls with colored hair, it seems that the two developers wanted to style a true sampling of human types. The parodic intent is evident: even the liberating act of drinking a beer has now become a way to conform to the aesthetic and moral standards typical of the most vulgar consumerism.

The search for a simple Pilsner, therefore, becomes the search for a normality far from the narcissism of social networks. The script doesn’t take itself very seriously and pop culture references scattered throughout the adventure make it more enjoyable and fun. Dude, Where Is My Beer? it won’t be a masterpiece like Grim Fandango, but it got more than a few smiles from us over the course of its short duration. 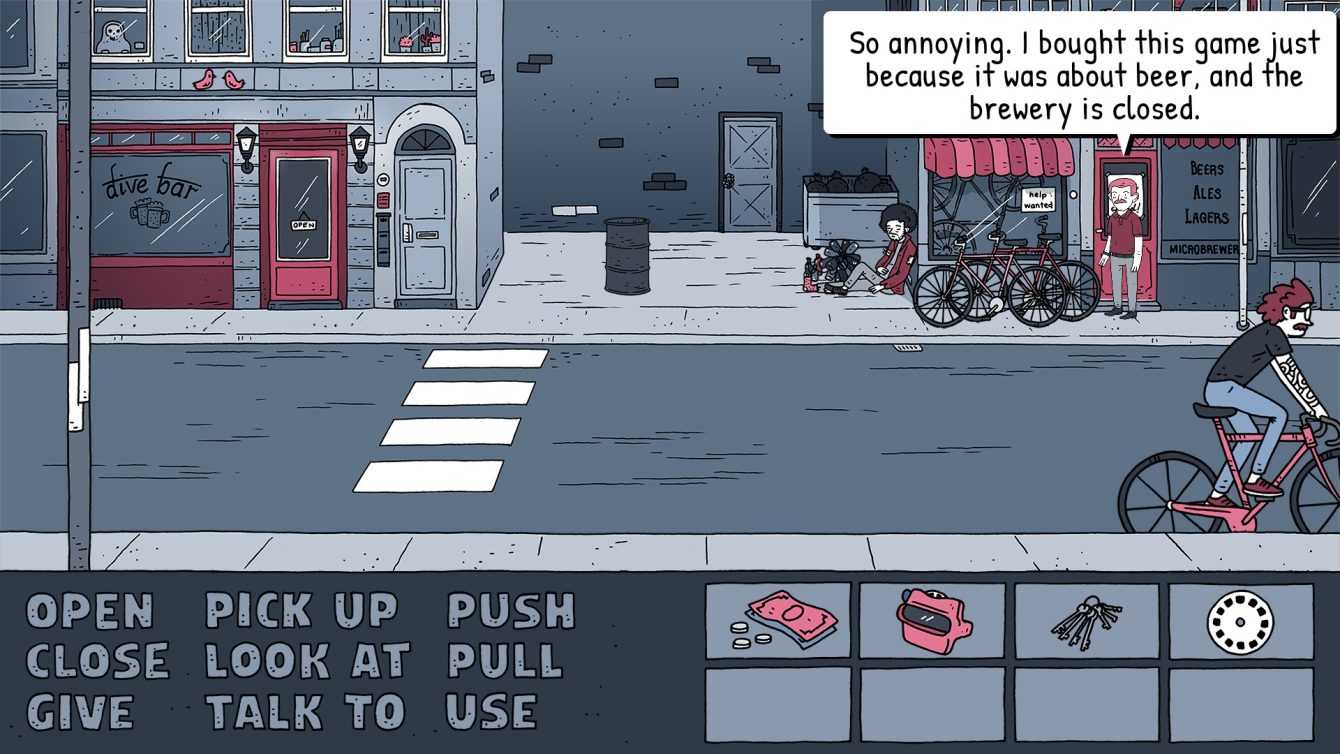 A Tribute to the Classics – Dude Review, Where Is My Beer?

The gameplay of Dude, Where Is My Beer? it does not differ at all from the old graphic adventures of LucasArts. The developers probably loved works like the series Monkey Islands, Day of the Tentacle and the aforementioned Grim Fandango, because their work slavishly follows all its characteristics.

The exploration is done with the mouse. We can interact with almost every component of the scenario to see what our protagonist thinks or if it is possible to use or collect a certain object. It will be possible to join two different objects together, use them for solve puzzles and puzzles and maybe even convince someone to let us pass or give us some more clues.

Everything in the rule, then, even if every now and then we found ourselves puzzling more than necessary to continue in history. A more sympathetic and context-appropriate mechanic is represented by the level of sobriety of our protagonist: drinking a beer will allow you to get tipsy and unlock new dialogue options. Not a bad idea that suits the light-hearted style of the work. 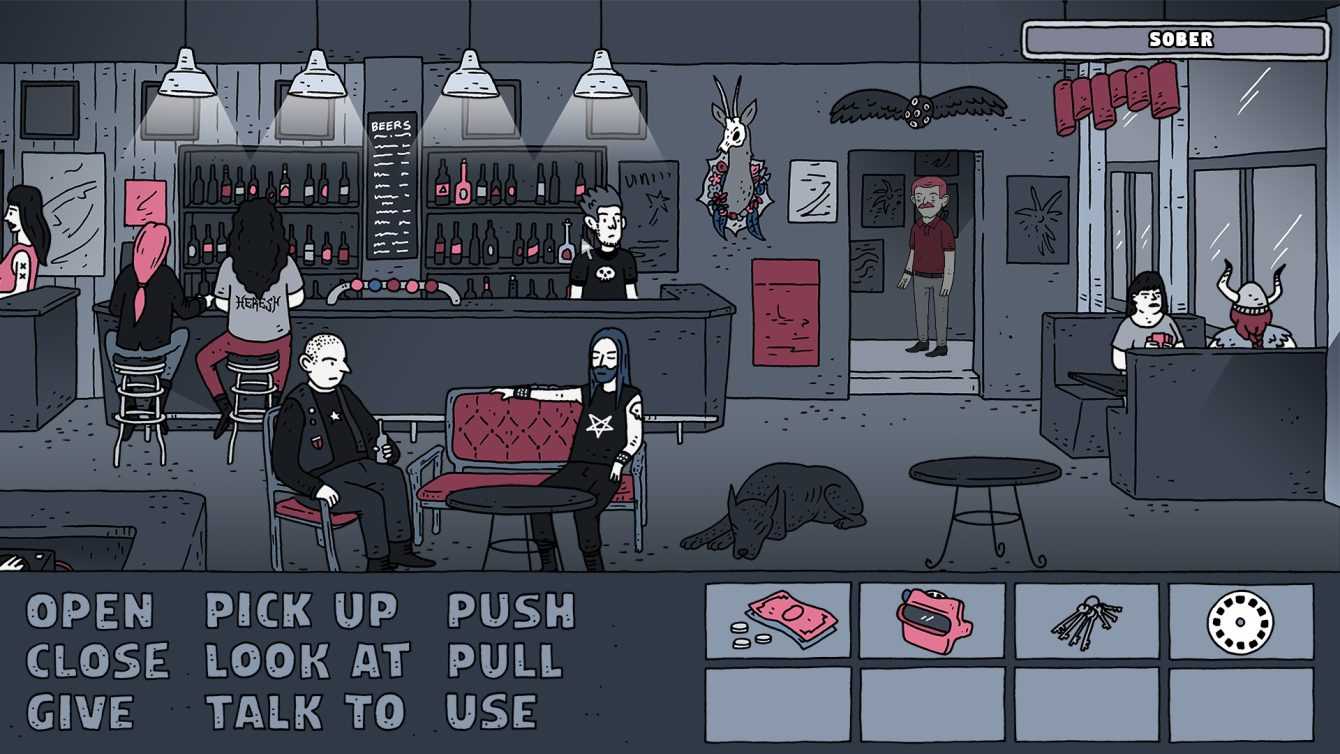 Disegni da hipster – Review Dude, Where Is My Beer?

Everything works quite well in Dude, Where Is My Beer ?, even when it comes to analyzing its aesthetic component. The title is entirely two-dimensional and the various environments have been hand drawn following a new millennium cartoon aesthetic that we really liked. Perhaps the various settings are a bit too monochromatic and rely too heavily on gray and dark tones, with some splashes of burgundy here and there, but overall the Oslo atmosphere has been recreated very well.

Dubbing is not present (e not even the subtitles are translated into Italian), while the soundtrack does not shine but can be heard without problems. Perhaps this is where the budget limits of the title are most visible, but we did not take them into account very much in the judgment. 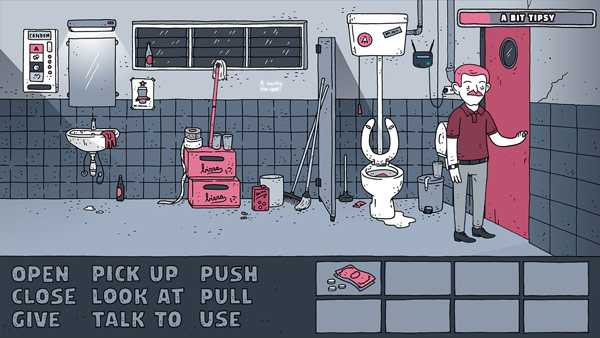 The beer of a lifetime

Dude’s review, Where Is My Beer? ends here. The product developed by Arik Zurabian and Edo Brenes is light-hearted, fun and full of beers. The two developers’ tribute to the masterpieces of LucasArts it is undoubtedly successful, although it does not shine for who knows what narrative or playful feature. We still appreciated it social criticism veiled in irony and the overall satisfactory aesthetic realization.

If you are interested in buying game keys at a discounted price, you could take a look at Instant-Gaming, which offers a pretty good amount of titles for all platforms. To stay informed about the world of technology and video games, however, continue to follow us on the pages of TechGameWorld.com.

In search of the lost Pilsner